Dear Friends: People often ask me who is the woman on the book cover of my wartime novel Bird’s Eye View. Here’s a peek into the design process for all three of my book covers. 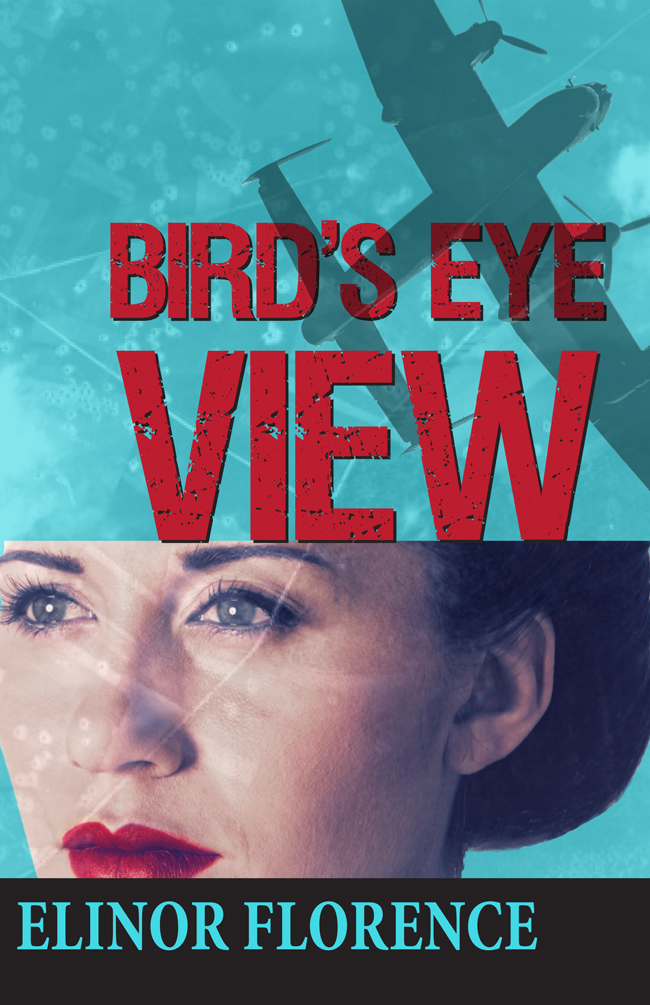 My first novel Bird’s Eye View is about a fictional Canadian woman who joins the air force in the Second World War and goes overseas to England, where she becomes an interpreter of aerial photographs, spying on enemy actions by studying these photos through her magnifying glass.

This is the first cover, and although I did like the contrast between the pink background and the bombers, I didn’t think it portrayed aerial photography. 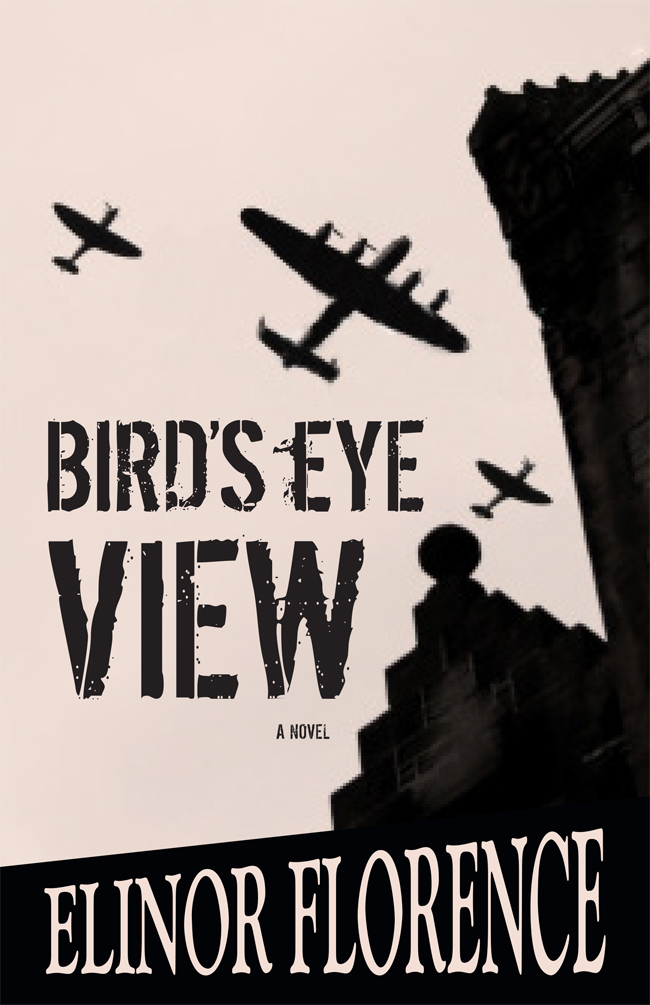 Since the heroine Rose is seeing the progress of the war through her own eyes, I believed the cover had to feature a pair of eyes.

My designer found this image of a unknown model posing as a member of the armed forces. Her eyes are very intense, and she is wearing the bright red lipstick so popular in wartime. 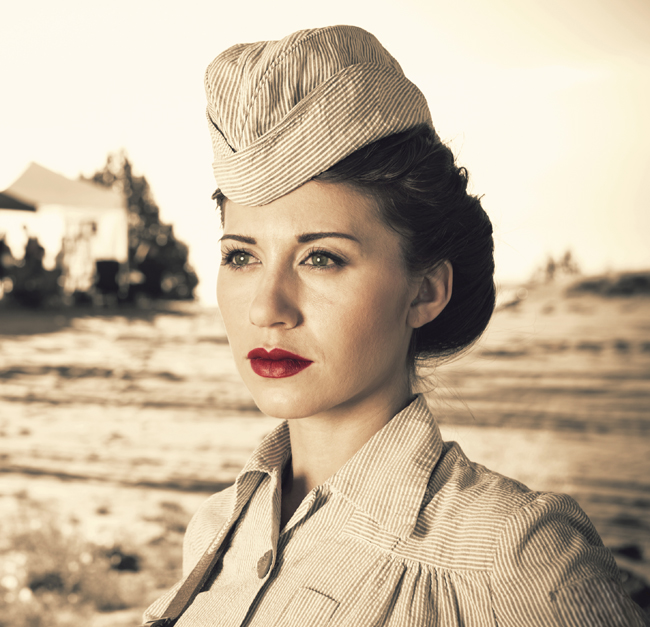 My publisher wanted a cover that would appeal to both men and women. After some discussion, my designer and I agreed there is no such thing!

However, since my heroine Rose is identifying bomb targets on the continent, I suggested we include the mighty four-engine Lancaster bomber used by both the British and Canadian air forces.

(And it’s true that most men do notice the bomber on the cover first!) 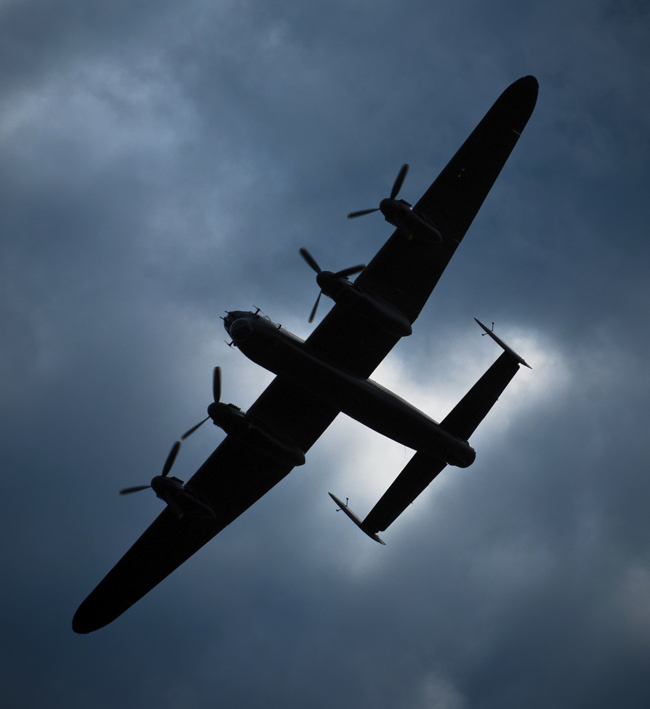 Finally, we found an aerial photograph to use as the background. It’s a wartime image taken over Pas-de-Calais, France and looks just like the ones that my heroine studied, including bomb craters, fields and roads. 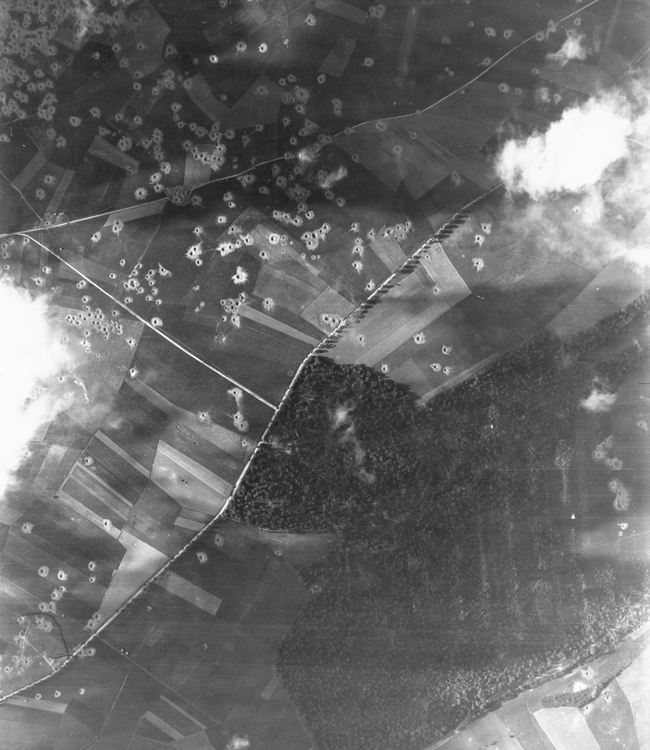 My designer married the three elements, and this is what he came up with.

I particularly like the way one of the roads runs right across Rose’s face, like a scar. Nobody who participated in that terrible conflict came away unscathed.

I also think it is meaningful that Rose is looking west, toward her home in Canada, while the bomber is flying east toward enemy territory on the continent.

The font is important, too — it looks as if it has been shot full of holes!

As for the back cover, it was only natural that I would use an image of the wonderful mansion RAF Medmenham, headquarters for aerial interpretation during the war, the setting for all of Rose’s discoveries. 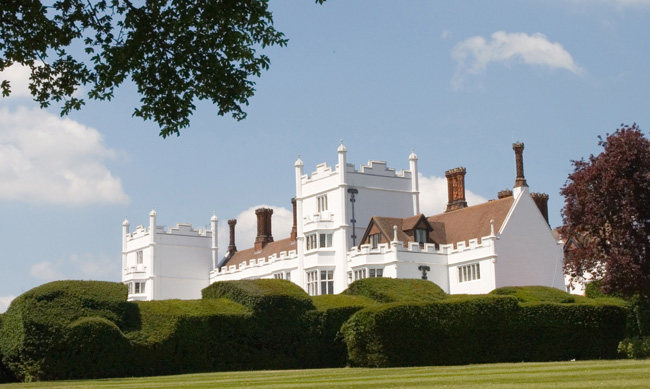 But the sky in this photograph is too blue and peaceful — so my designer found this image of the moody skies to illustrate the dark clouds of war. 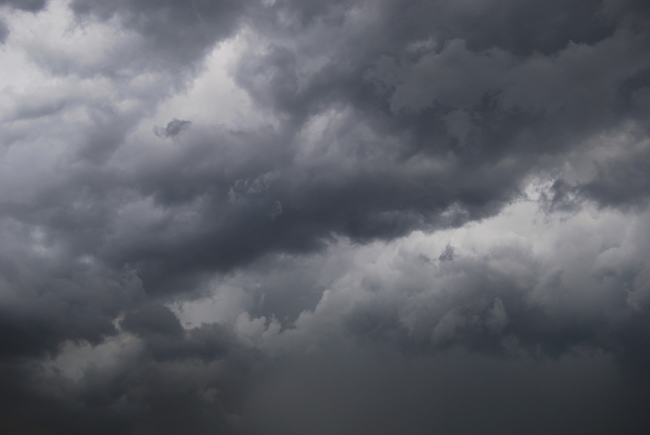 Put them together, and the back cover looks like this. 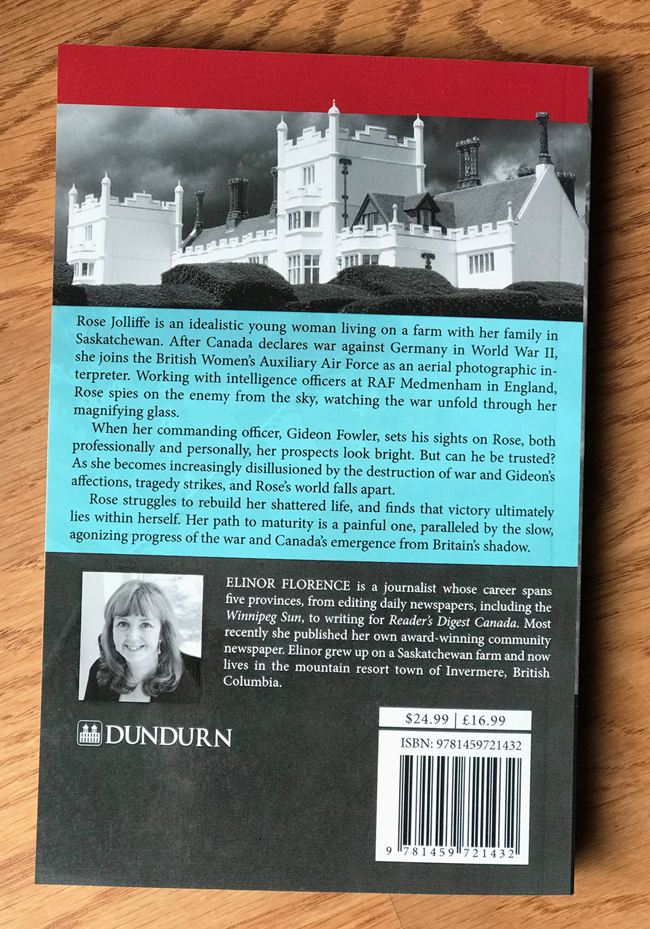 Bird’s Eye View is sold in the Danesfield House Hotel gift shop, near Henley-on-Thames, one hour west of London. Here’s a hotel employee holding a copy.

I was supposed to have participated in an event there last May, but the pandemic put the kibosh on that. Hopefully I will have another chance! 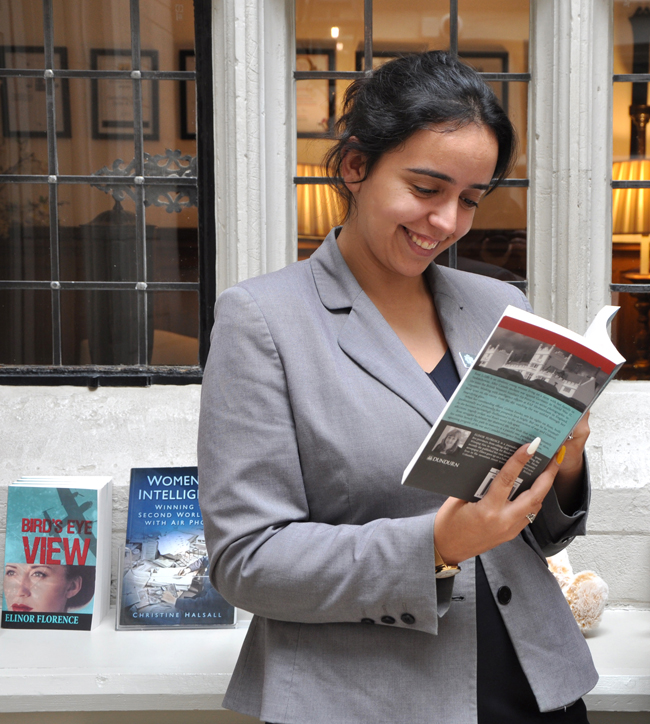 I did many interviews with veterans, and uncovered so many interesting stories when researching Bird’s Eye View, that I published all of them on my website, under the heading Wartime Wednesdays.

And you are welcome to read each and every one of them by clicking on the link here and searching the index for categories or titles: Wartime Wednesdays.

In 2016 I chose thirty of my best stories and printed a book titled My Favourite Veterans: True Stories From World War Two’s Hometown Heroes.

The book is sold out, but I may consider a third printing if there is enough demand from my readers. 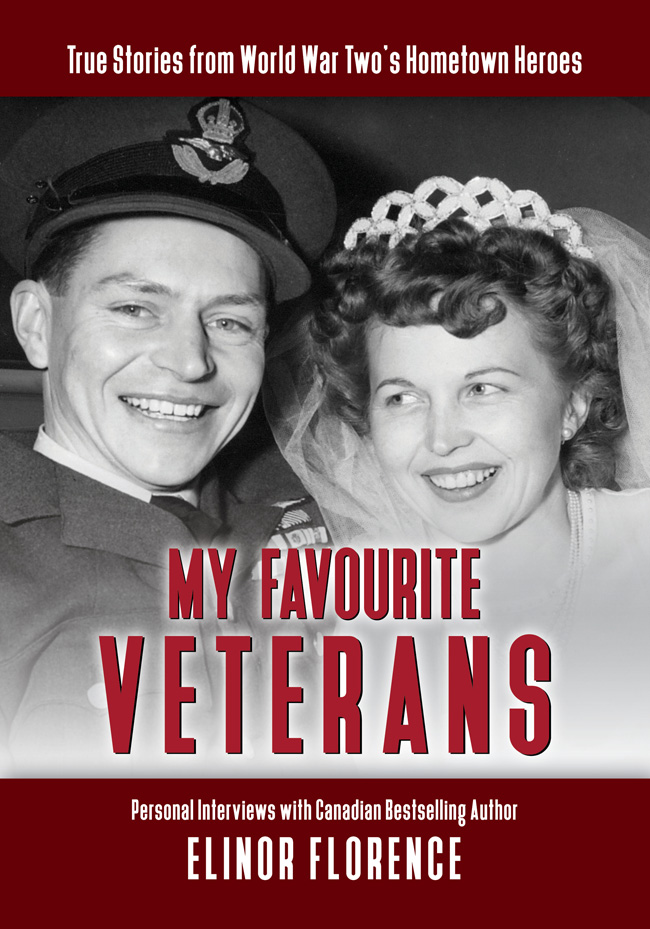 It was easy to choose the cover image for this book. Not only is Spitfire ace Stocky Edwards from my home town of Battleford, Saskatchewan, but his wife Toni (formerly Alice Antonio of Hazel Dell, Saskatchewan) also served in the Royal Canadian Air Force. I wanted to honour both my male and female veterans.

During the war some women were married in their uniforms, mainly because they didn’t have any choice. But because Stocky and Toni married after the war (he remained in the air force for many years), she wore a stunning white gown. I could have chosen this lovely photograph for the cover. 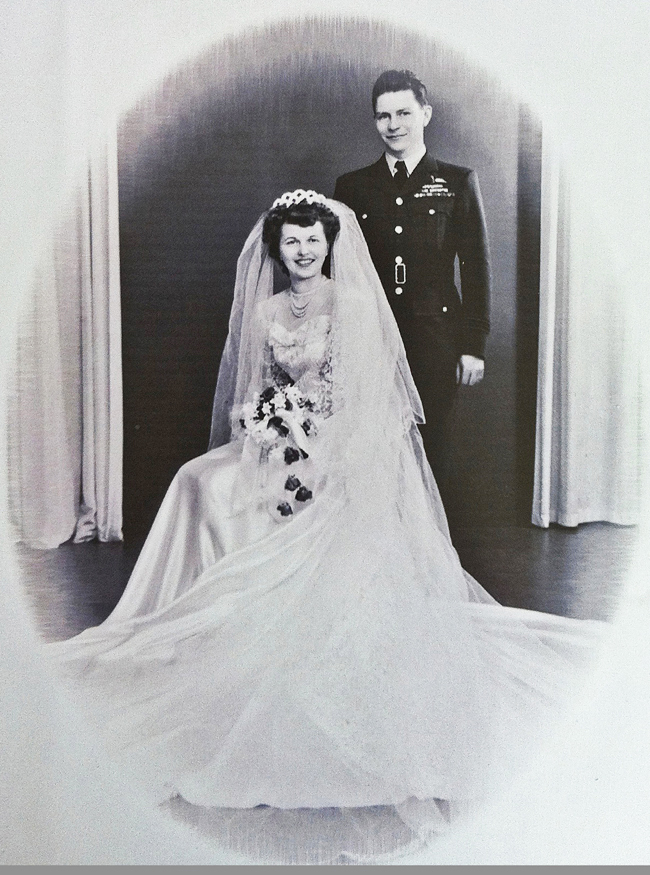 However, it is the joy on both their faces that I wanted to share with my readers, and I love this candid snap taken while they were sitting in the back seat of a car. 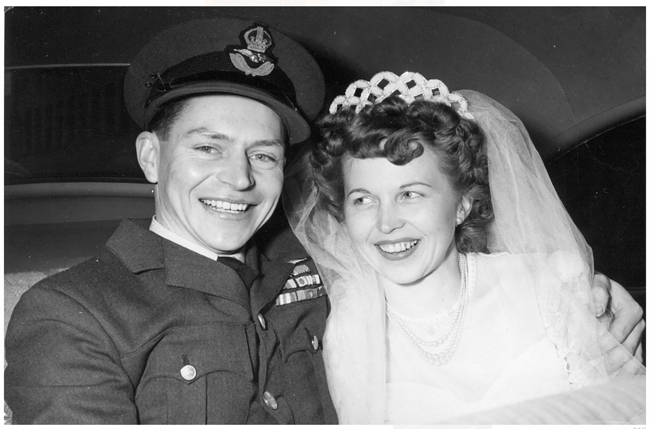 For the back cover, I chose a photograph of myself with one of my favourite veterans, Bud Abbott. Bud flew his bomber off the deck of an aircraft carrier during the war for the Royal Naval Air Service. After the war, he emigrated to Canada where he became a well-known figure in the community of Cranbrook, B.C. Bud passed away in 2019. It was my honour and privilege to know him.

You can read Bud’s story here: Bud Abbott Rained Terror on the Tirpitz. 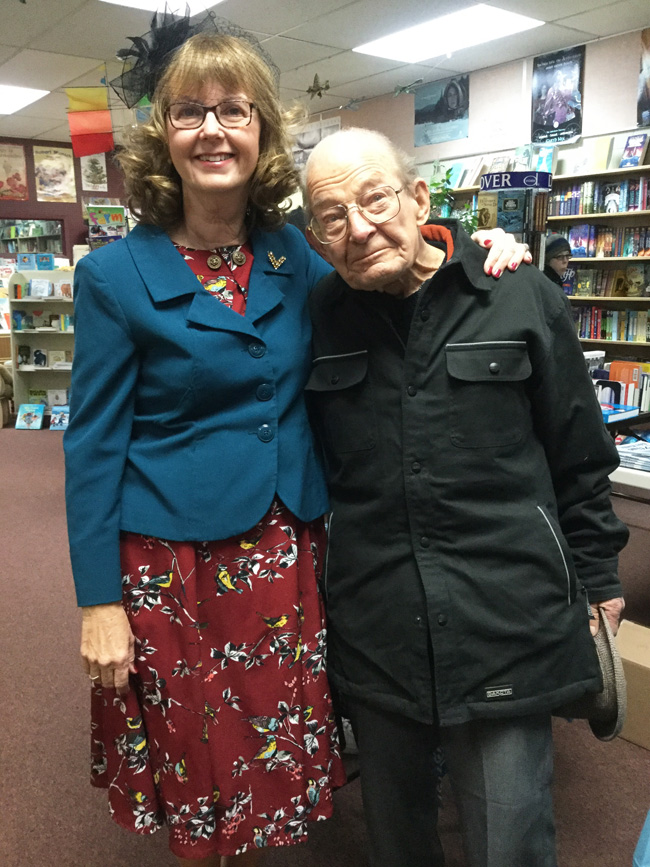 And here we are, together forever on the back cover of my book! 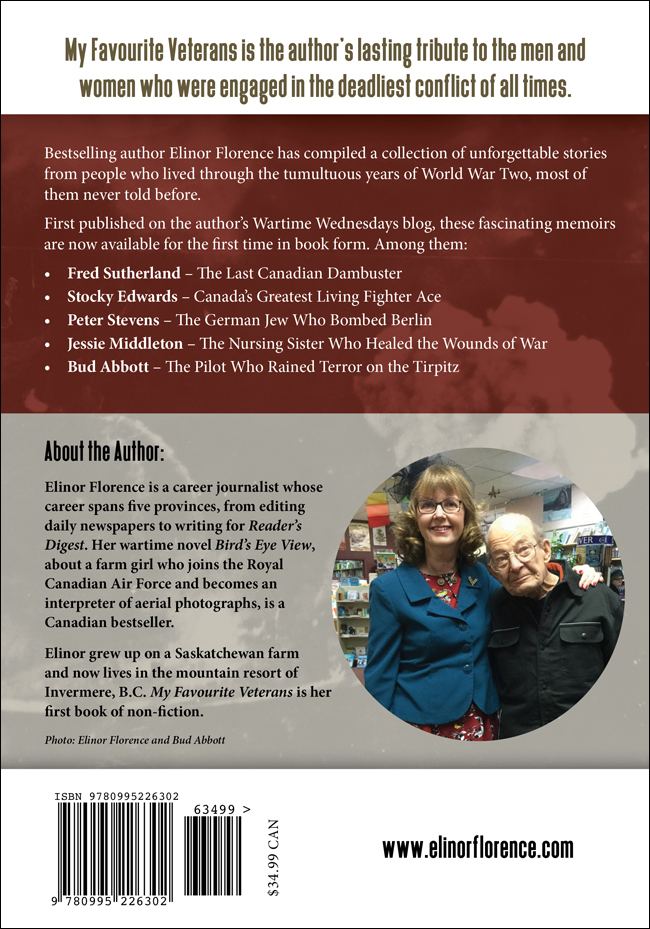 My second novel Wildwood is about a single mother from Arizona who inherits an abandoned farm in the boreal forest north of Peace River, Alberta, on condition that she lives there for one year, off the grid.

Together she and her little girl set off into the isolated bush, and attempt to survive for 365 days — I won’t spoil the story by telling you whether they were successful! 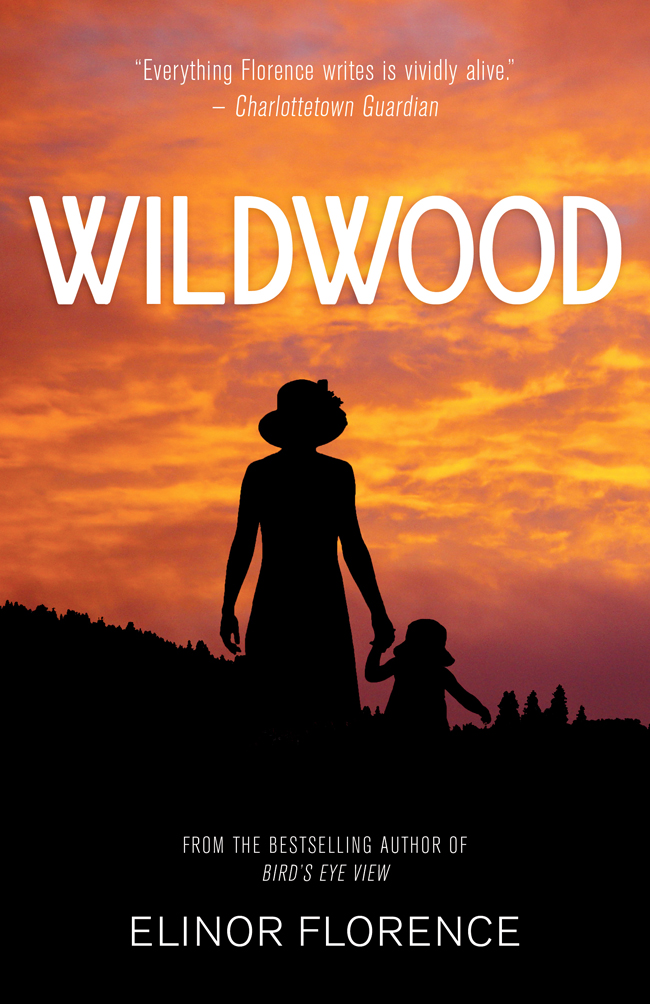 This was a tricky one. My designer and I went through dozens of generic images showing forests and farmhouses. Then we tried getting down to the finer details and searched for things like barnwood, peeling paint, patchwork quilts, candles, broken windows, even doorknobs. Nothing worked. 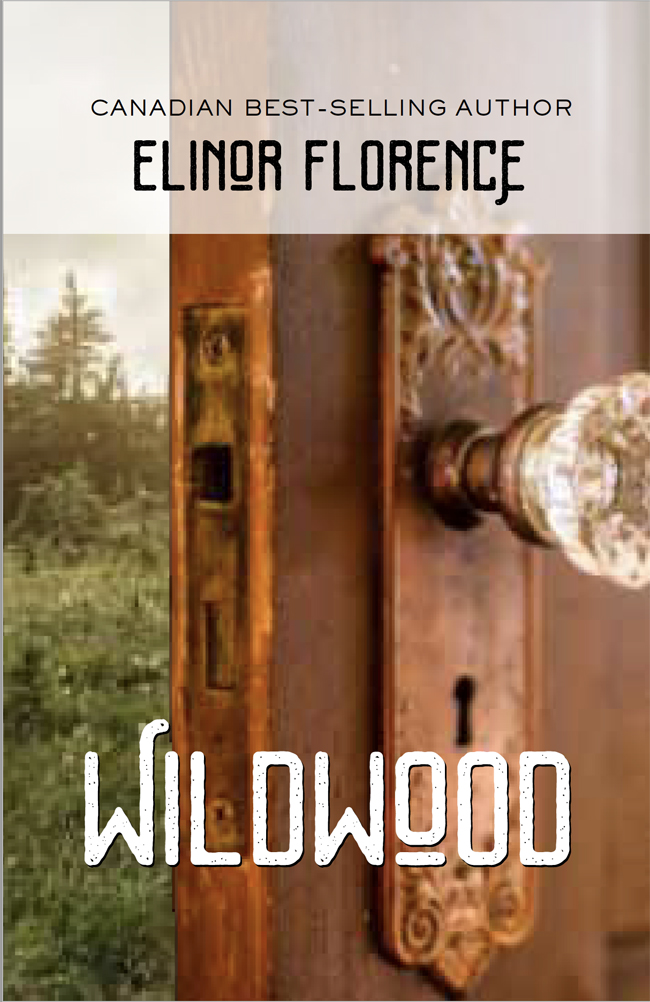 I will spare you all the awful options we came up with, and cut to the chase.

I decided that what I really needed was an image of a mother and child — the two main characters in the book.

This was the first draft. It was close, but it looked like the two were going for a stroll rather than facing the wilderness. 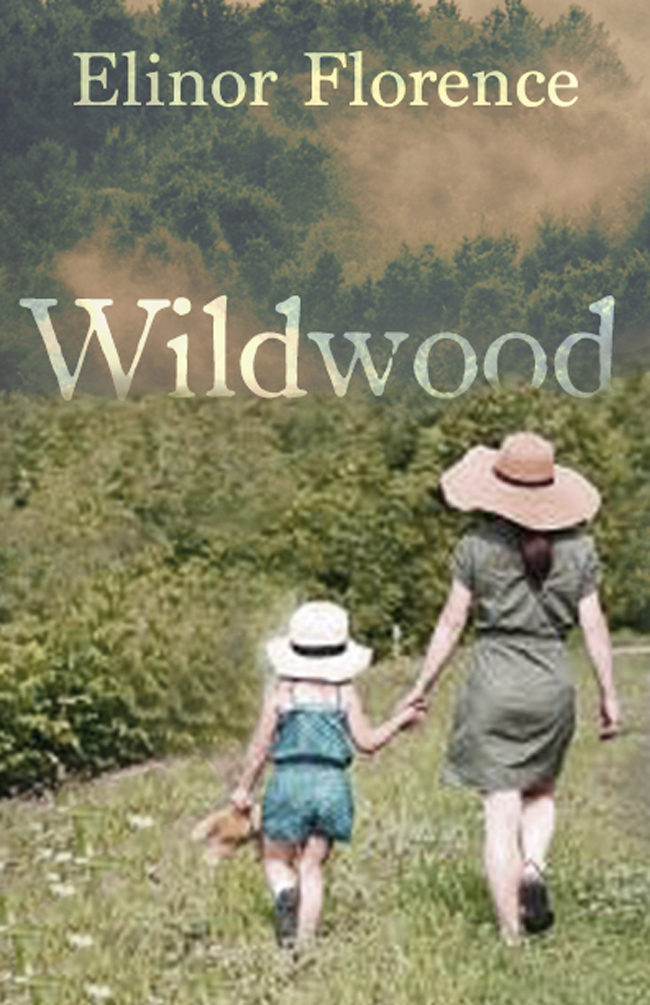 Here’s another version (one of many). The blue background and the dark woods made it look too much like a thriller (although the characters do have some hair-raising adventures, the book isn’t classified as a thriller). 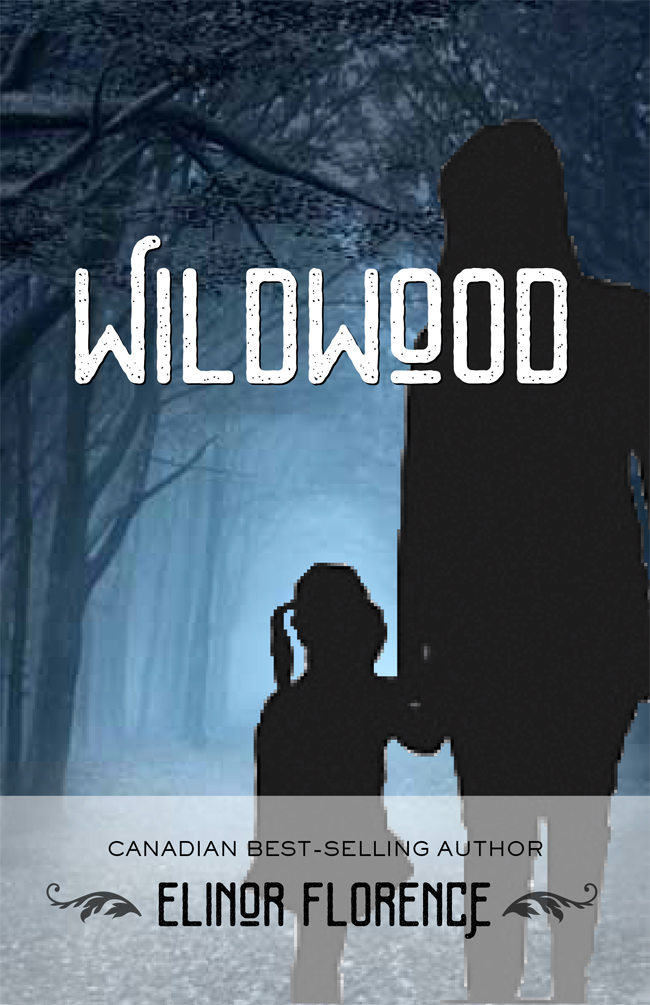 This, too, looked a little spooky. 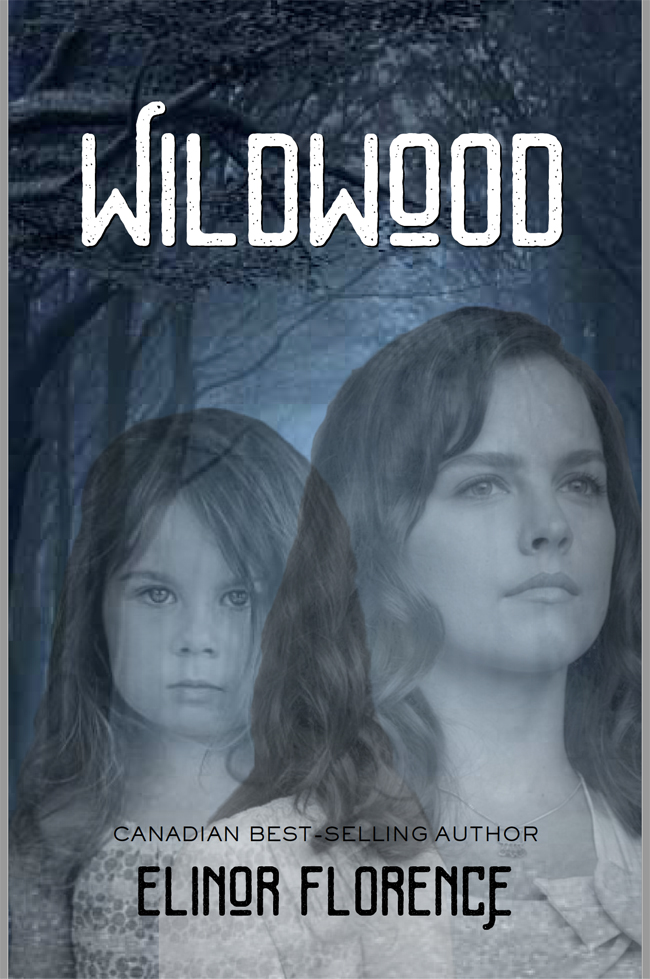 Then I found this image online, which was closer to my vision. 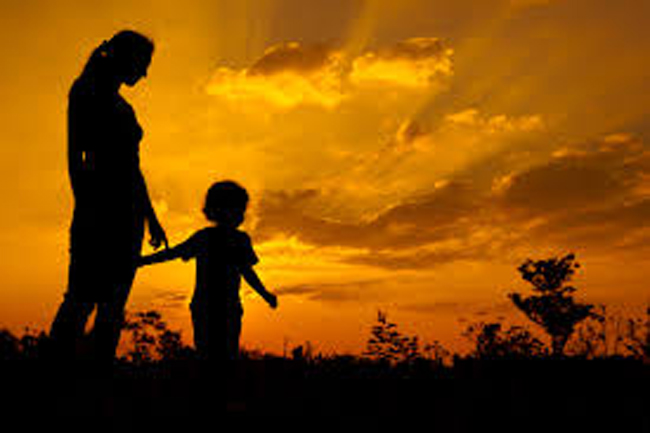 This one is much better, with the trees and the winter sky. 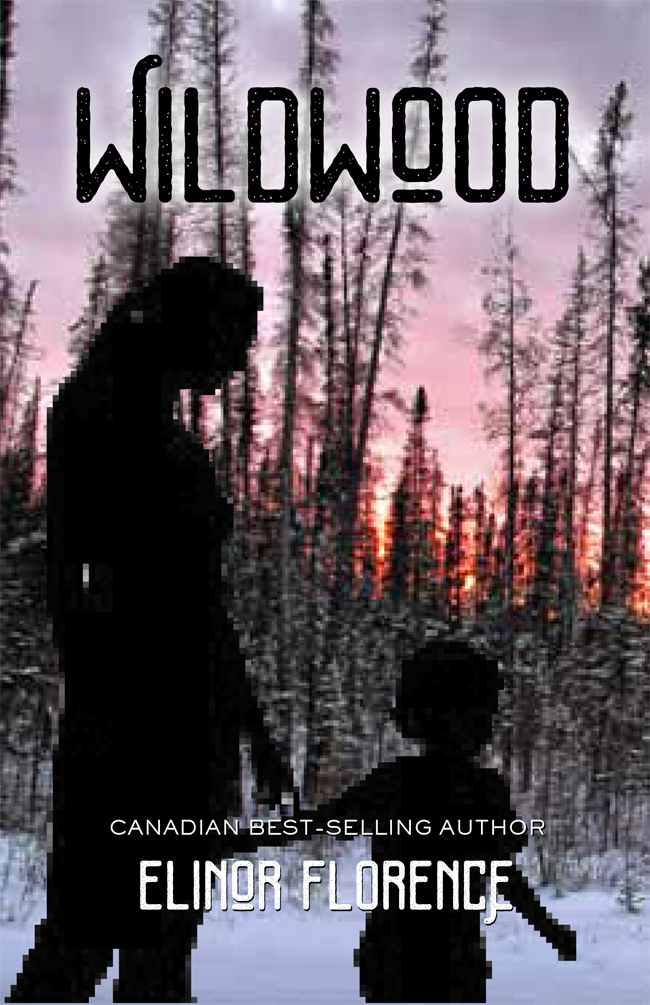 Then I found this image, which was perfect! And I love their hats! 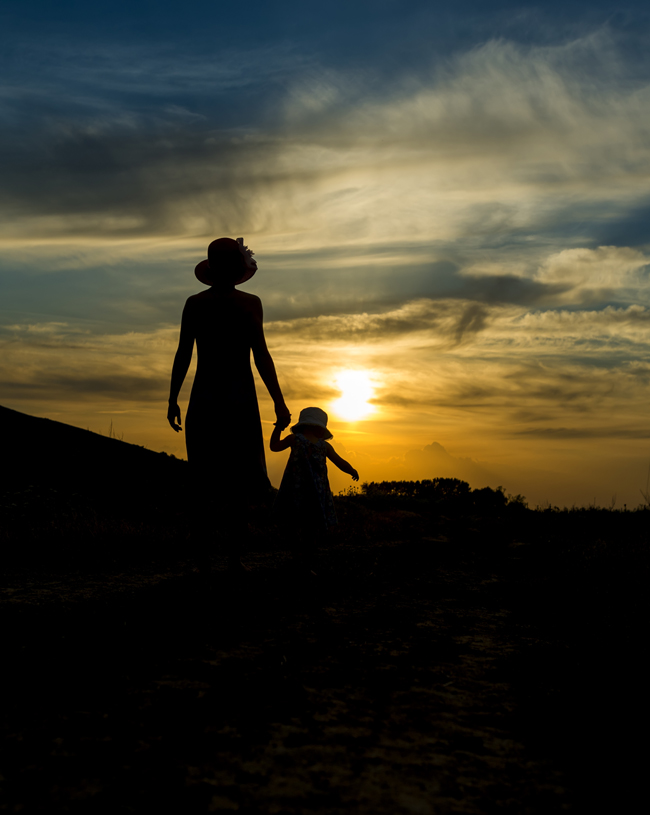 However, the background was too dark so my designer jazzed it up with a glorious skyline, fitting for the spectacular sunrises in that part of the world.

If you look closely, you can see that my designer even added spruce trees to the skyline to make it look more like the boreal forest found in northern Alberta.

I think this cover truly captures the young mother and child bravely setting off into the unknown!

A couple of final notes about book covers:

Unless you are lucky enough to find something in the public domain, all images must be licenced for use and purchased from the copyright holders. None of the images here may be used without permission.

Hopefully you can appreciate how much time and effort goes into a good cover design. The long-suffering designer who created the covers for all three books is Harrison McKay, who can be contacted here: www.smoove.ca.

In September, I was invited by Elaine Cooper to visit a book club in Qualicum Beach, B.C. to discuss Bird’s Eye View, and the members presented me with a beautiful arrangement of succulents!

I was surprised and very touched by these generous gifts from both clubs.

Remember I can always visit your club via Zoom or Skype, so don’t hesitate to ask! 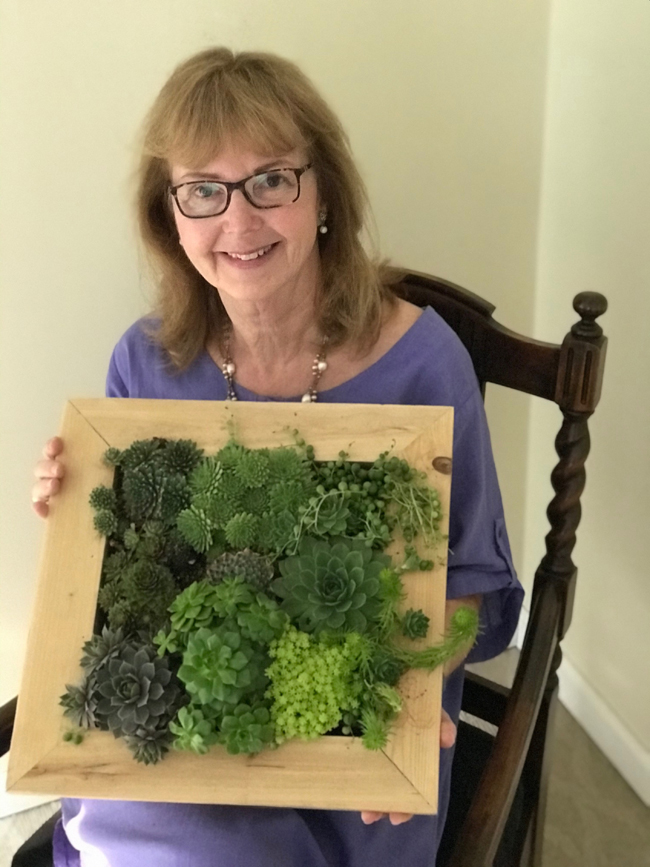 Friends, I’m hard at work on my new novel, which has a pioneer theme — and that’s all I can tell you at this point, since conventional wisdom says that talking about a work in progress drains your creative energy.

I’m also taking lots of long walks in this beautiful autumn weather, and mentally preparing myself for a cozy winter at home in front of my computer. (You can see photos here: My Home Office).

To make sure everyone (namely, my husband) keeps away, I found this adorable door hanger, featuring my favourite vintage typewriter image! 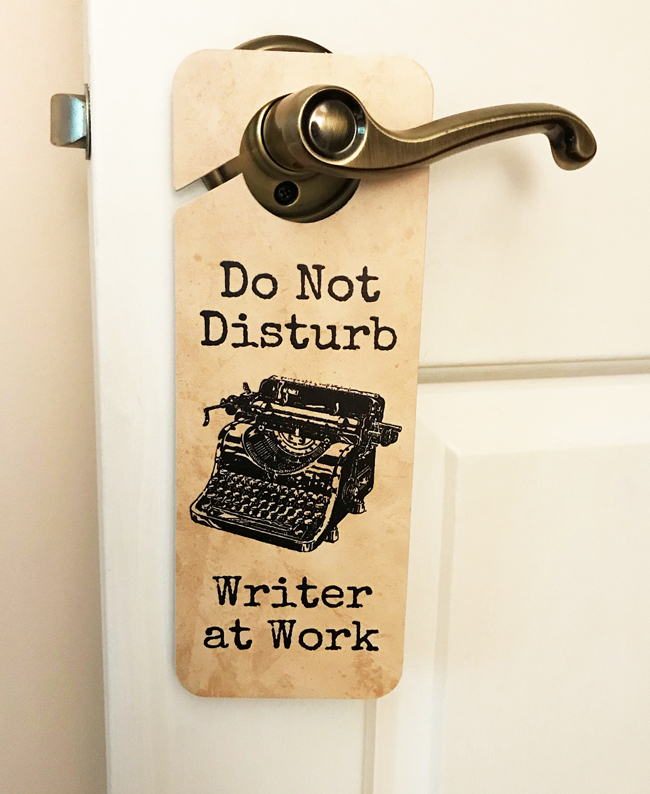