How were children on the home front protected from the horrors of a world at war? The short answer: they weren’t. Kids were fully involved in the war effort, doing whatever their little hearts and hands could manage. 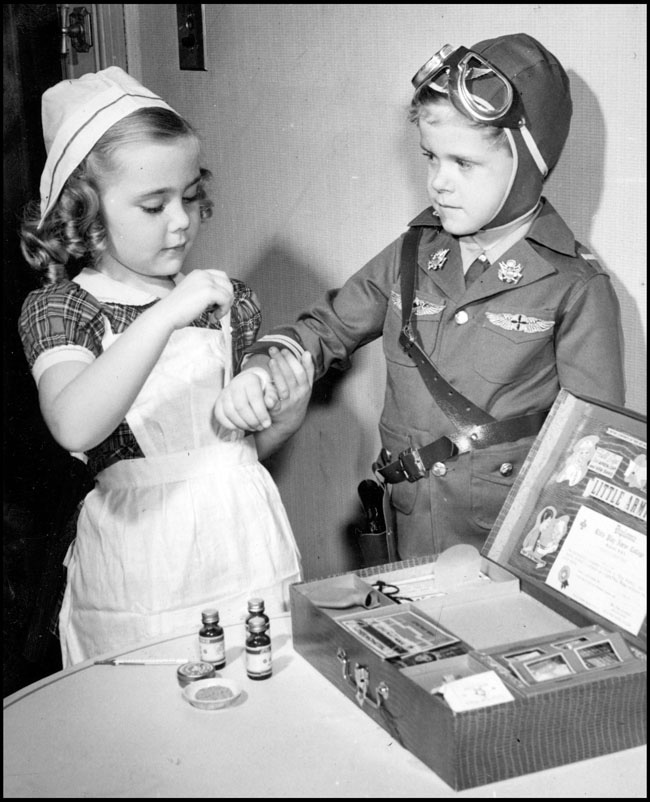 Many children who grew up during the war were too young to fight, but they still wanted to do their bit.

Canadian kids were keen to defeat the enemy, and their enthusiasm turned them into valuable assets. So schools, churches, governments, and other organizations harnessed all that youthful energy and put it to work.

Kids were good at scavenging. Encouraged by their parents and teachers, plus incentives such as free passes to movies, kids collected tons of metal, paper, rubber, and grease. These materials were in short supply and were recycled into weapons and war machines. Some kids even donated their own toys for metal salvage drives.

(Another advantage of all this scavenging was that our streets and roadsides never looked so good, stripped of bottles, cans and other garbage).

My uncle Jim Light of Battleford, who was too young to enlist, collected rubber bands and rolled them into a giant ball. How I wish someone had taken a photograph of him with his giant rubber globe!

Boy Scouts and Girl Guides were particularly active. For example, the Tenth Toronto Scout Troop collected 510,000 pounds of salvage and used the money to buy both a truck and an ambulance for the Royal Canadian Air Force.

(Families didn’t travel back then, because fuel was rationed. To learn more, click here: Saving Fuel for the War Effort.)

These two boys in Montreal were photographed in April 1942, collecting collect rubber tires and boots to be recycled as part of Canada’s war effort. 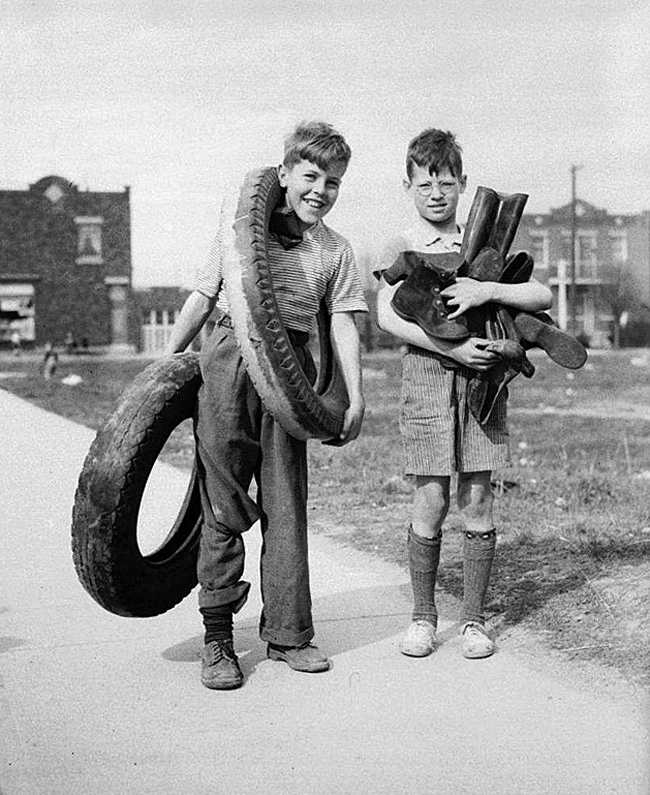 The Canadian government even awarded school students a Certificate of Merit for their work collecting scrap metal and rubber, like this one presented to Eve Allan in Alix, Alberta. 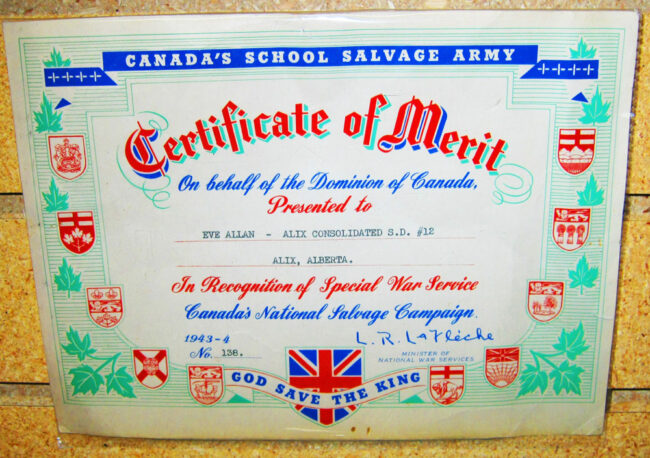 The government coerced kids into emptying their piggy banks. Children used their pocket money (and in those days, every nickel was hard-earned) to buy War Savings Stamps, which they stuck into special booklets for post-war redemption. A child could buy War Savings Stamps for 25 cents each, and after saving $4 worth of stamps, the child would receive a War Savings Certificate worth $5.

Of the $5.5 billion raised in Victory Loan appeals, literally millions were contributed by children! 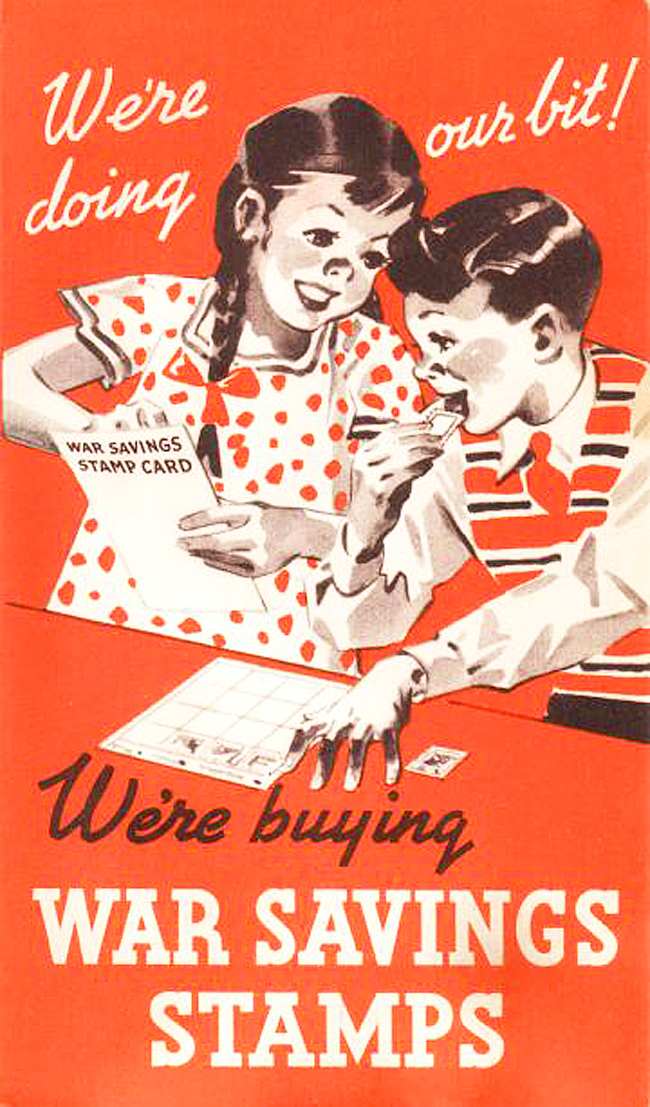 Children in all Allied countries went on rations. Our diets in North America weren’t as restricted as those in Europe, but children certainly did without chocolate and ice cream and sugary desserts. There’s some speculation that they were healthier than today’s kids as a result. (To read my previous post about rationing, click: Rations and Recipes.)

This little guy looks proud as punch to receive his Ration Coupon Book. 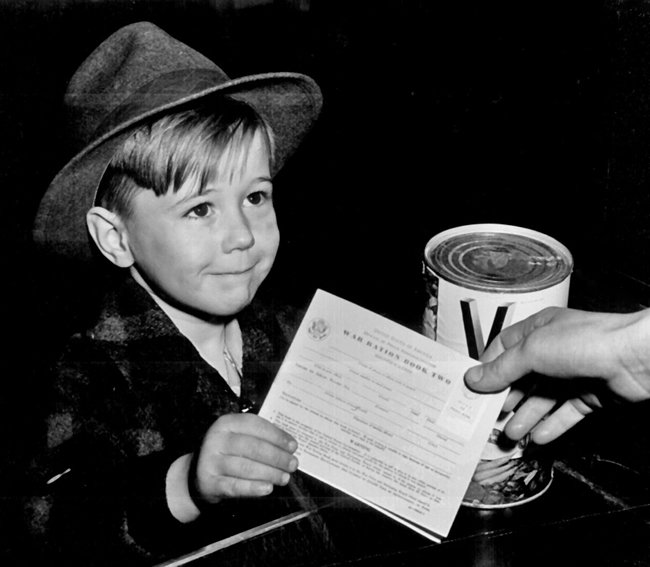 Because so much food produced in Canada was being sent overseas to the hard-pressed British people, plus our own fighting men, people plowed up their yards and grew as much fresh food as possible.

Kids were expected to work in their Victory gardens. This was an ideal task for even a small child who could be taught the difference between a weed and a vegetable. 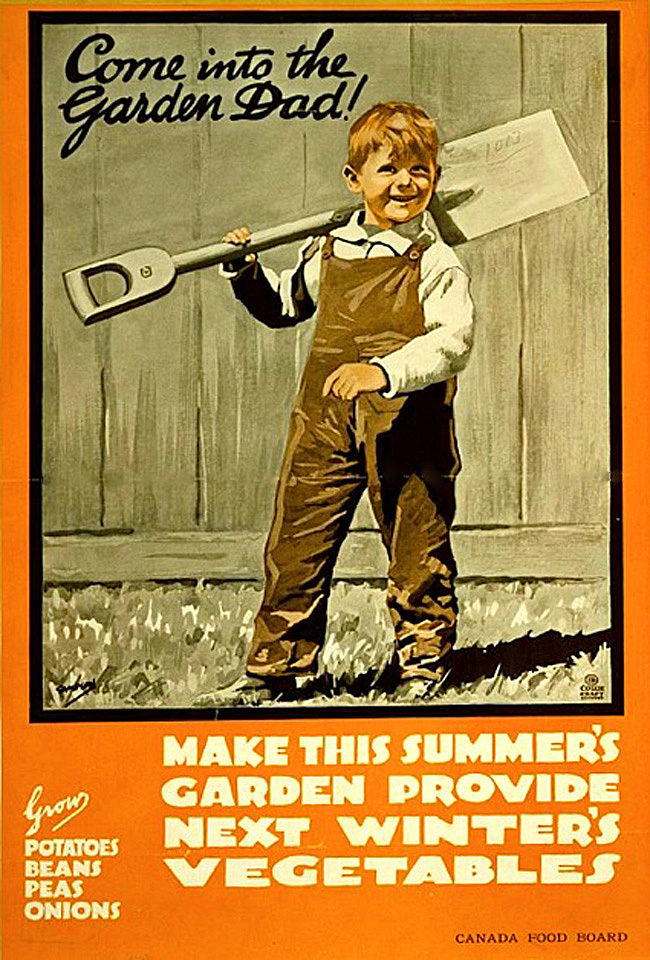 Schools and children’s organizations led the way, with knitting taught in many classrooms. Students organized Red Cross sewing rooms and sewed and knit articles for servicemen, civilians in bombed areas, and orphaned British children. In this photo from the Canadian War Museum, there is only one girl on the left; the rest are boys. 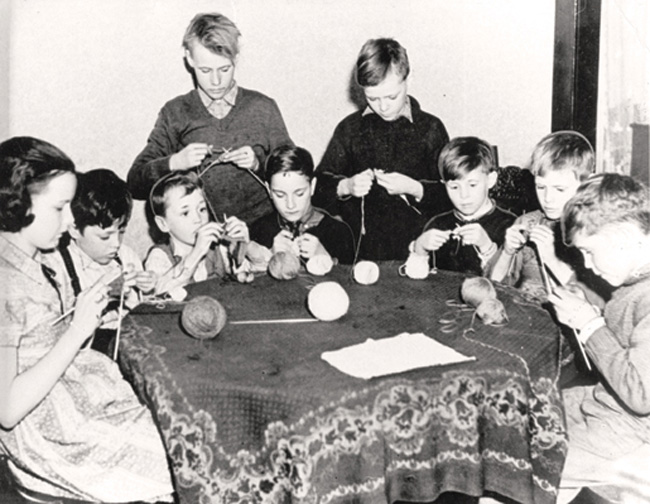 Through their industrial arts classes, the Protestant students of Montreal made 15,000 arm splints for the Red Cross.

Even the very youngest students wrote letters to servicemen, and made art projects to be sent overseas to the fighting men for Christmas.

Forty thousand boys in high schools across Canada worked on the production of scale models of fighting aircraft to be used to train pilots, observers, and gunners in the British Commonwealth Air Training program. 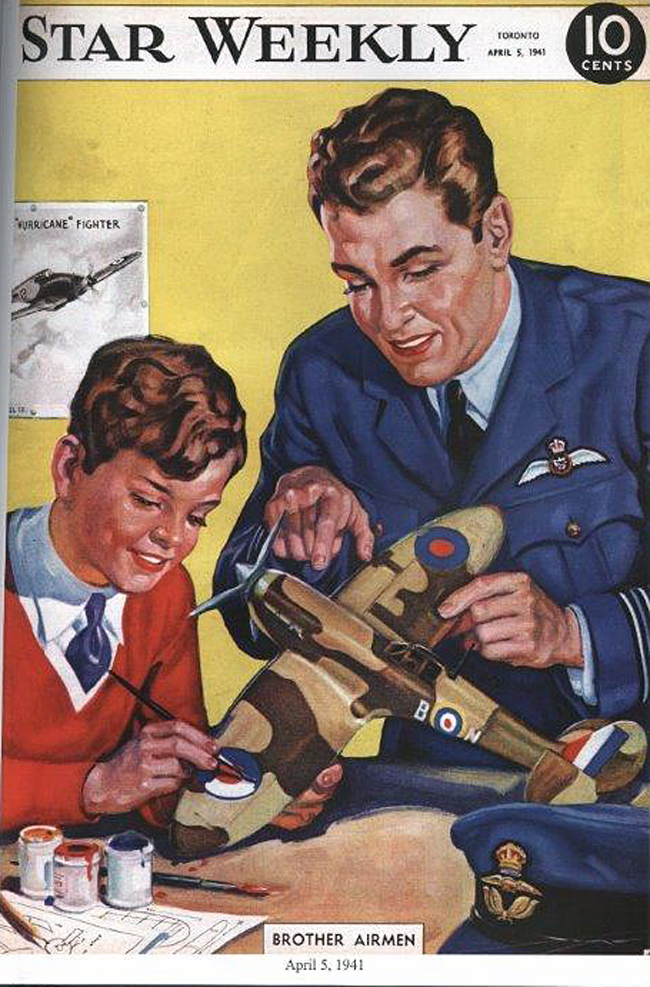 With most able-bodied men overseas, there weren’t enough farm workers to harvest the crops. Countless young people worked long hours on farms to ensure a steady food supply for Canadians and our Allies.

Many schools didn’t even take attendance or introduce new material in classes until after the crops were harvested in the fall. The government lowered the minimum age for obtaining a driver’s licence to 14 so that children could legally operate farm trucks and other vehicles.

Here’s a group of Girl Guides at work on the harvest. 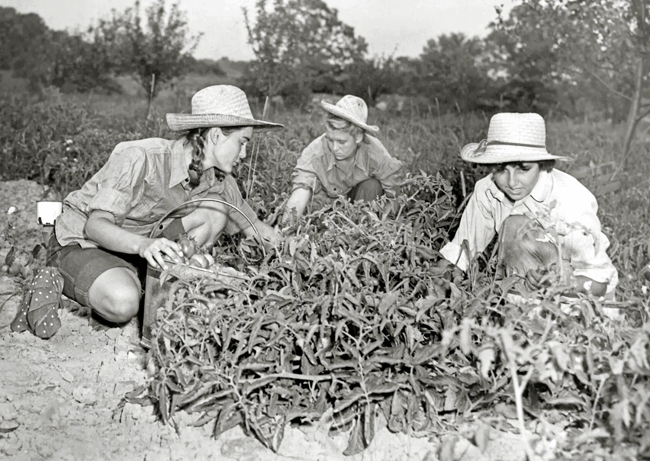 War was a common game played on the streets. Boys, with sticks for guns, pretended to be the uniformed men they saw everywhere. And they were encouraged by their families to be “just like Dad.” 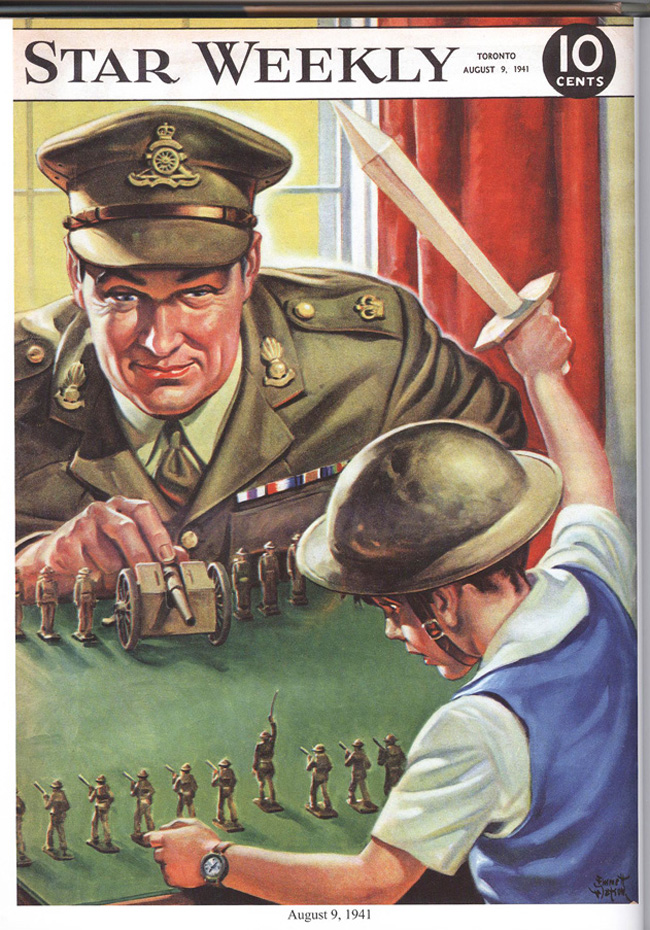 While the words “Hitler” or “Nazi” were ominous and frightening, kids had no mental images of the horrors of war. The war movies shown at the local theatre only showed the glorious side of victory. Hitler was usually a comical figure, easy to defeat.

(To see my collection of covers, click here: Star Weekly at War.) 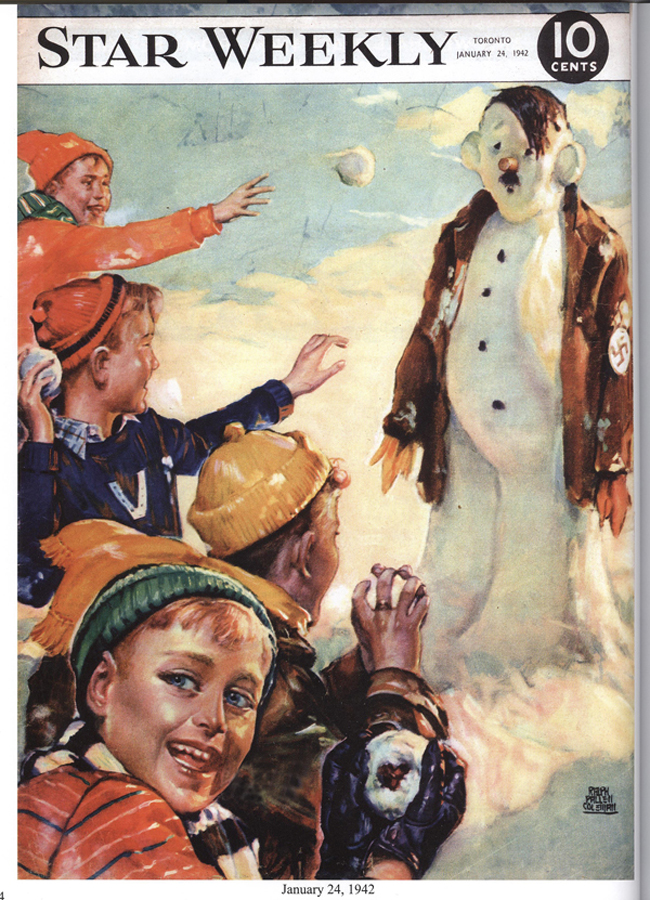 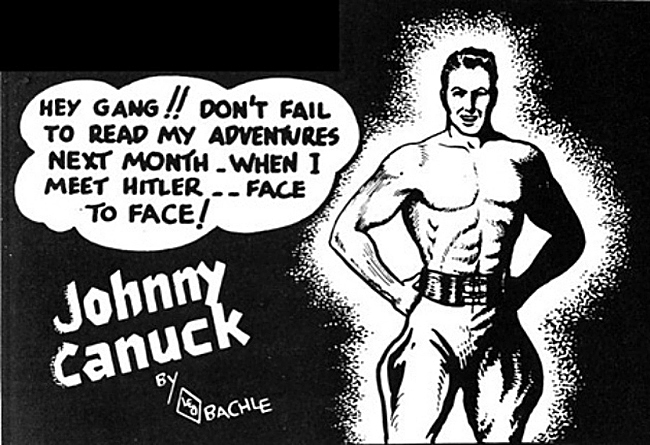 Children saw themselves as junior soldiers in training. High school students, both boys and girls, joined militia groups and learned how to march, drill, and fire weapons.

Many Canadian soldiers were just teenagers themselves. About 700,000 Canadians under the age of 21 served in uniform. The underage volunteers who looked old enough and lied about their age were often accepted. Many who were rejected served in the Merchant Navy, where they transported troops and materials overseas.

Private Gérard Doré of Quebec is considered the youngest Allied soldier who died on the Western Front in World War Two, just one month short of his seventeenth birthday.

Born on August 29, 1927, he left home at age 15 and enlisted in the Royal Canadian Artillery by lying about his age. He sailed for Britain on May 1, 1944 with the Fusiliers Mont-Royal.

On July 8, about one month after D-Day, his regiment landed in Normandy and was assigned to the front. This brave young lad was killed in action and is buried in the Canadian War Cemetery at Bretteville-sur-Width in Normandy. 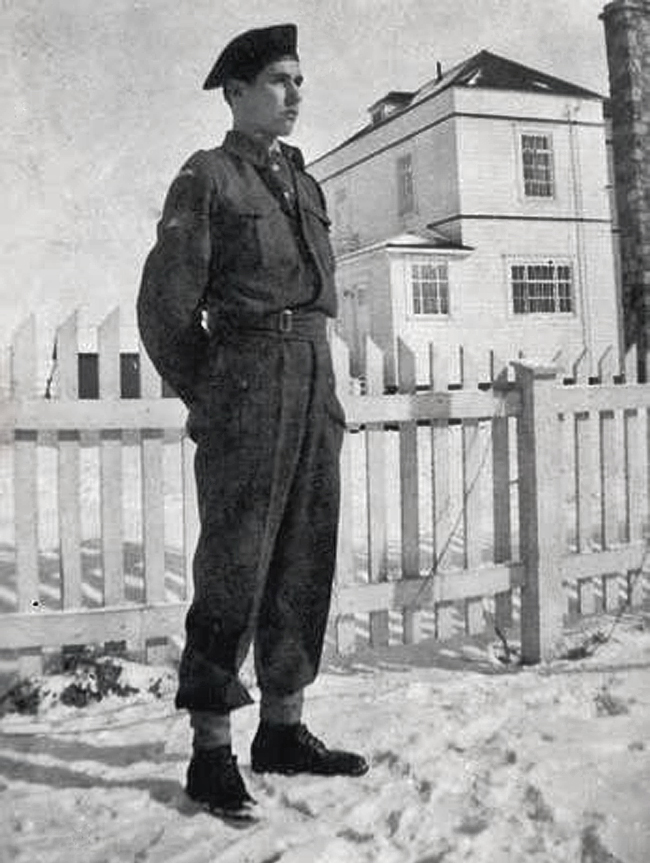 Canadian children on the home front didn’t face the threat to life and limb that their counterparts experienced in other war-torn countries. Here’s a memory from Trevor Wignall of Calgary, who was born in London in 1940.

“My playgrounds were bombed-out buildings, and at night we slept in a steel bomb shelter. My father was in the RAF and got his wings in Canada as part of the British Commonwealth Air Training Program. In 1949 we emigrated to Canada due to his experiences here.

“One memory that stuck in my mind must have been in 1945, as I was going to school with my older sister Barbara. Can you imagine children ages five and seven walking to school by themselves in this day and age, in wartime!

“We were walking to school when a V2 rocket landed not far from us. I remember the huge explosion and seeing shrapnel or great streaks of light in the sky across the street behind some row housing. I do not remember any concussion, so the bomb was probably far enough away not to affect us.

“A man across the street came out of his house, looked up at his windows, which were fine, and then went back into the house. That seemed to be the extent of his curiosity. (Bombs normally blew out all the windows and knocked soot down the chimneys).

“My sister was upset, so we went back home. We later found out the school was damaged, and the good news was that we did not have to go to school for a few weeks. Even at the age of five this was a happy event!”

Here’s an old photograph of Barbara and Trevor, looking overjoyed at the prospect of no school. 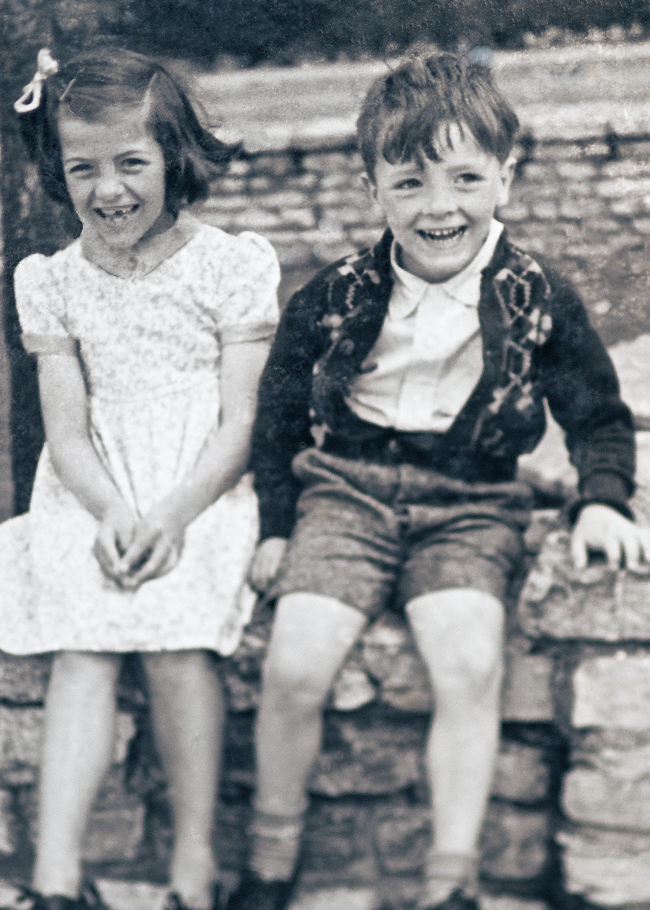 Readers, this incident reminded me strongly of one of my favourite wartime movies is the 1987 British drama called Hope and Glory. Remember how happy the kids were when their school was bombed into rubble? Here’s a shot of the children in that movie, carrying their gas masks in cardboard boxes. They look very similar to Trevor and Barbara Wignall! 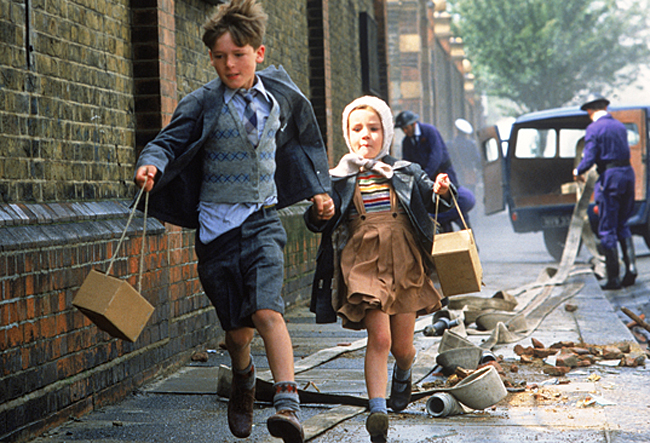 Although they didn’t experience anything so dramatic as bombing, Canadian children did suffer from the absence of their fathers.

“Wait for me, Daddy” is an iconic photograph taken in Vancouver in 1940 by Province newspaper photographer Claude Dettloff. It captured the touching scene of a five-year-old boy named Warren Bernard running after his father, Private Jack Bernard, as he marches off to war through the streets of New Westminster, British Columbia. 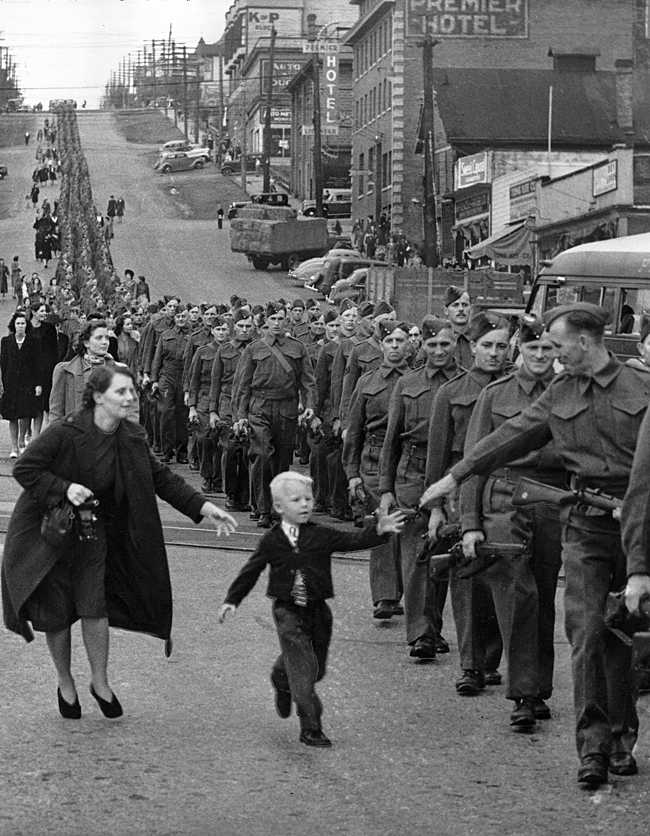 And here’s the happy ending: Warren Bernard was reunited with his father Jack several years later when he returned from the war. Warren was one of the lucky ones: his father came home. 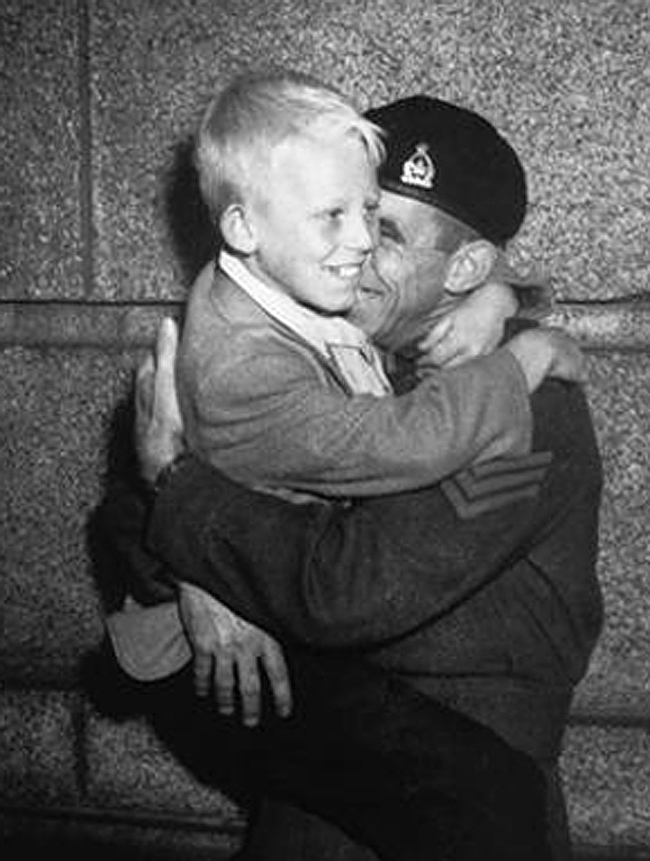 Many other kids were less fortunate. One can only imagine the lifelong sorrow of children who lost their fathers or older brothers.

This beautiful illustration by Andrew Loomis, sometimes called “In Memory,” depicts a valiant widow and her children in church. She is wearing her dead husband’s posthumous Distinguished Service Cross, the second highest award presented by the American armed forces for valor. 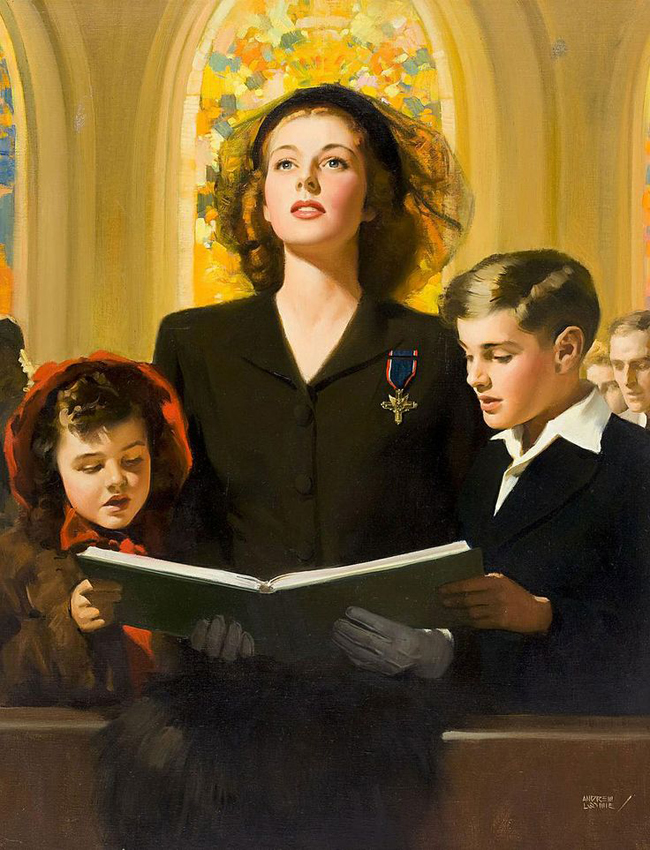