For hundreds of thousands of families around the world, 1945 marked the first happy Christmas celebrated together after the sad and lonely years of war. 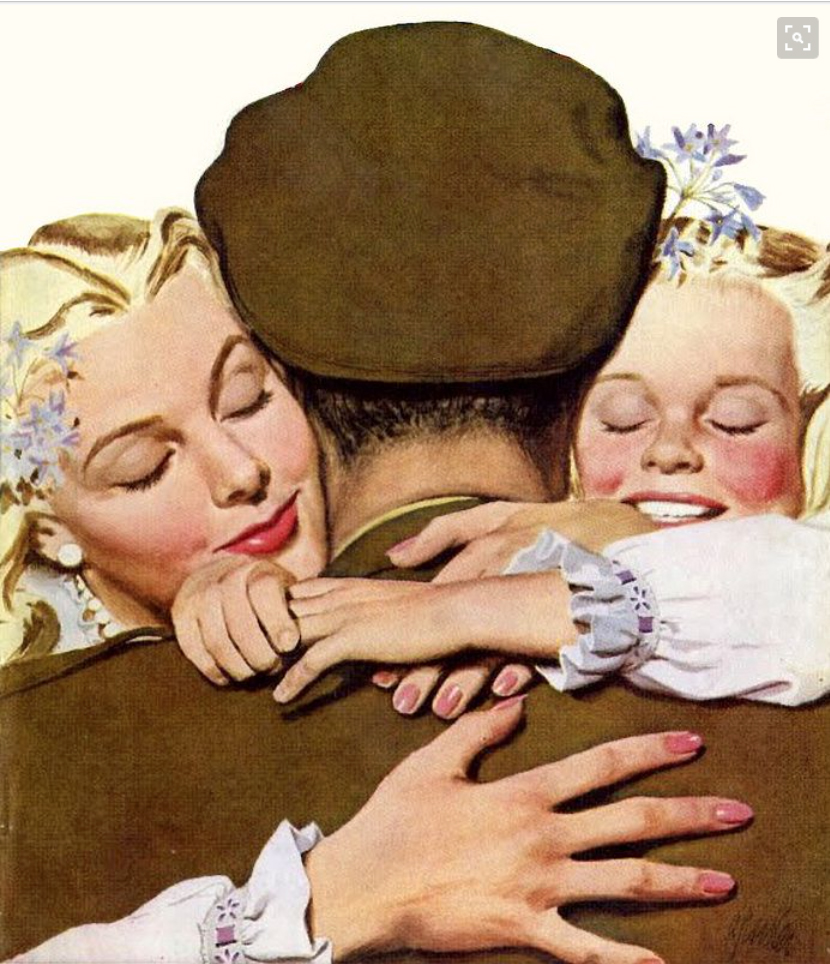 After the war ended in May 1945, it took months to transport all those men and women home again, and some didn’t arrive until just before Christmas.

My own father, who was serving with the RCAF in India when the war ended, didn’t get home until the following spring. He spent Christmas 1945 in England, and always said it was the best Christmas of his life. You can read his story here: My Dad’s Best Christmas: 1945.

Not all homecomings were happy, of course. I heard from one veteran who had lost both of his parents to cancer during his years away. He describes his homecoming as incredibly sad and empty. Other men returned home suffering from physical and mental wounds.

But for the majority, this homecoming was a joyful one. I’d like to celebrate by remembering the happiness of loved ones who were reunited at last.

In the first photo, Lieutenant-Colonel Robert Moore is greeted by his wife Dorothy Dee Moore and seven-year-old daughter Nancy, while a young nephew looks on. This photograph won the Pulitzer Prize for The Omaha World-Herald. It was taken by Earle Bunker in the town of Villisca, Iowa, population 1,100. 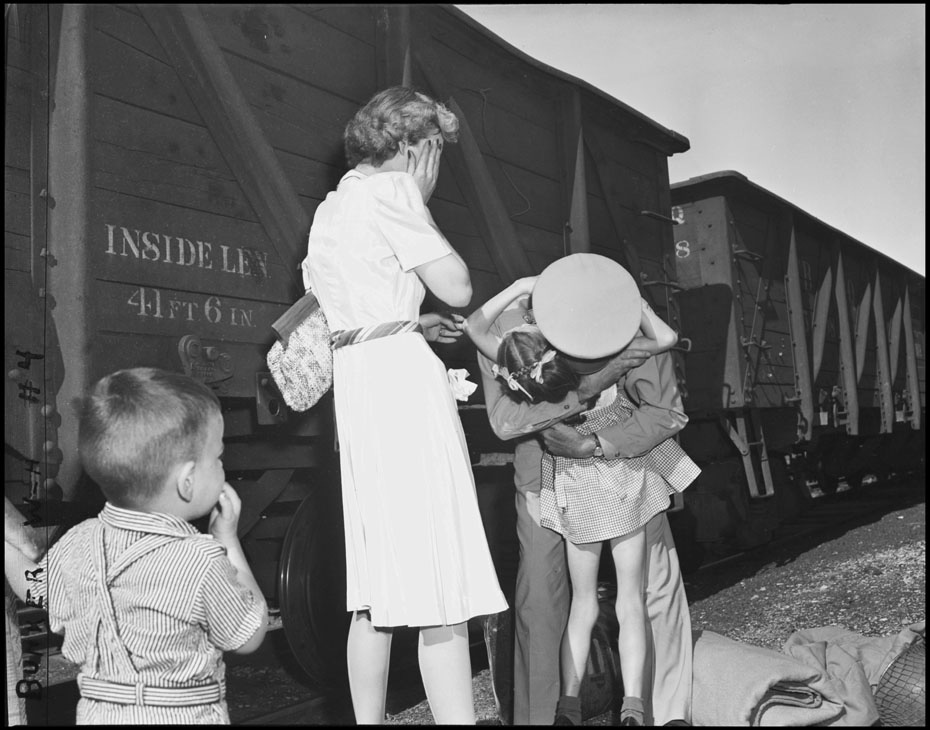 Children always played a big role in homecomings, even when they were too young to remember their fathers. This British baby looks absolutely delighted to be in his father’s arms! (Photo Credit: Getty Images) 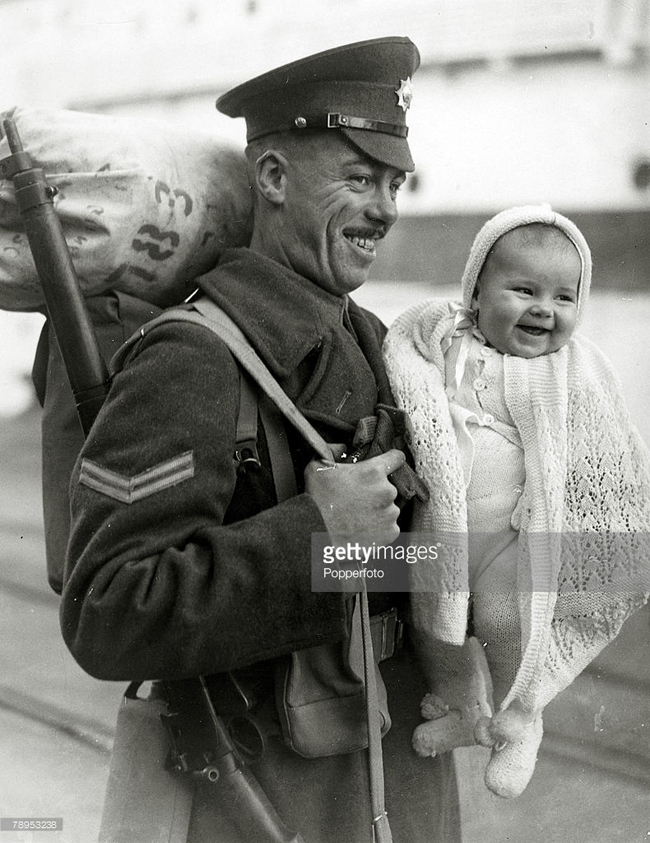 This American baby looks a little apprehensive about a strange man kissing his mother. Children were sometimes spoiled by their mothers while the men were away, and had a rude awakening when their dads got home! 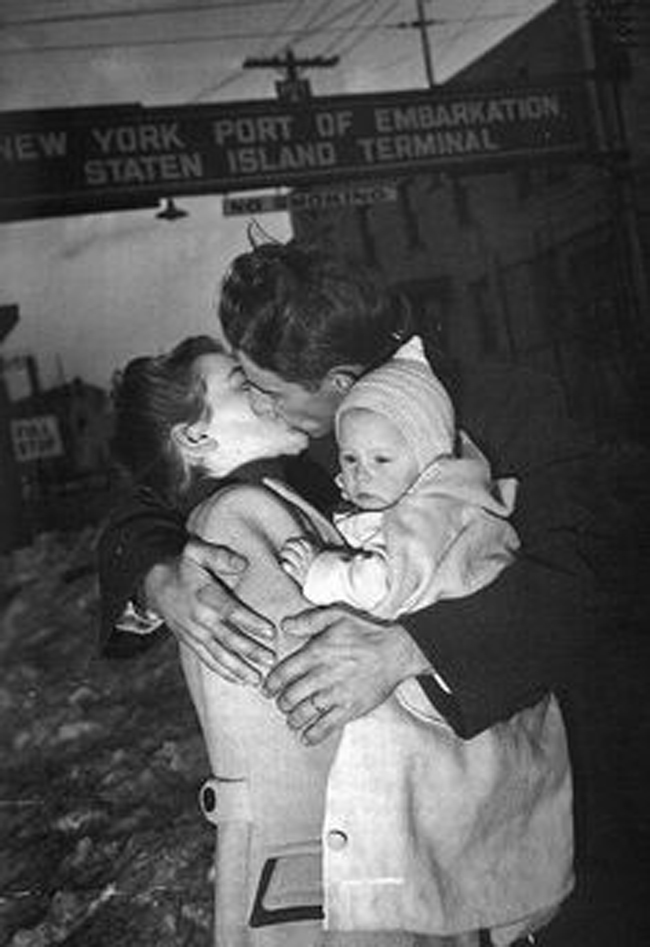 This little guy doesn’t want his mother getting all the attention! 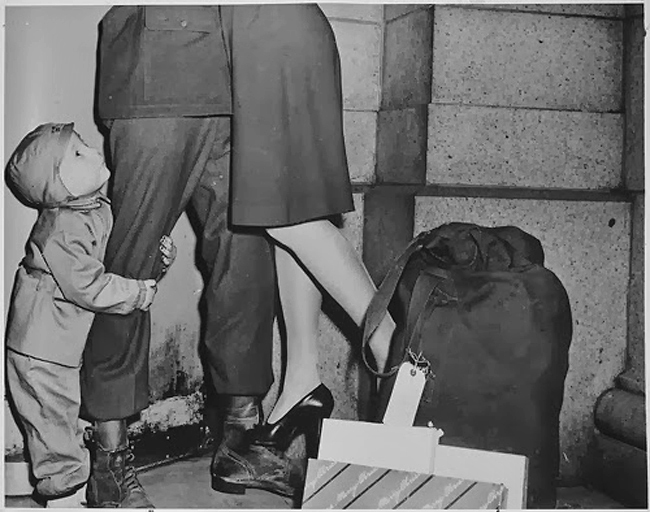 This little boy John Murdoch looks thrilled, even though he wasn’t old enough to remember his father. British soldier Hector Murdoch arrived home on his birthday, after three years in Japanese captivity. John and his mother Rosina decorated the cottage with flags and signs to welcome him home. 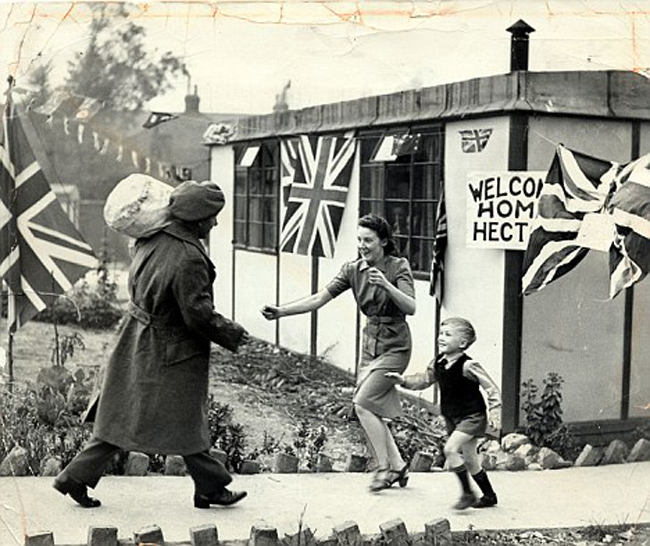 Another man who suffered terribly in a Japanese prison camp was Louis Zamperini of California, who hugs his mother while his sisters wait their turn in an emotional homecoming reunion. Zamperini spent more than two years being tortured. His story was told in the book Unbroken, and recently made into a movie. 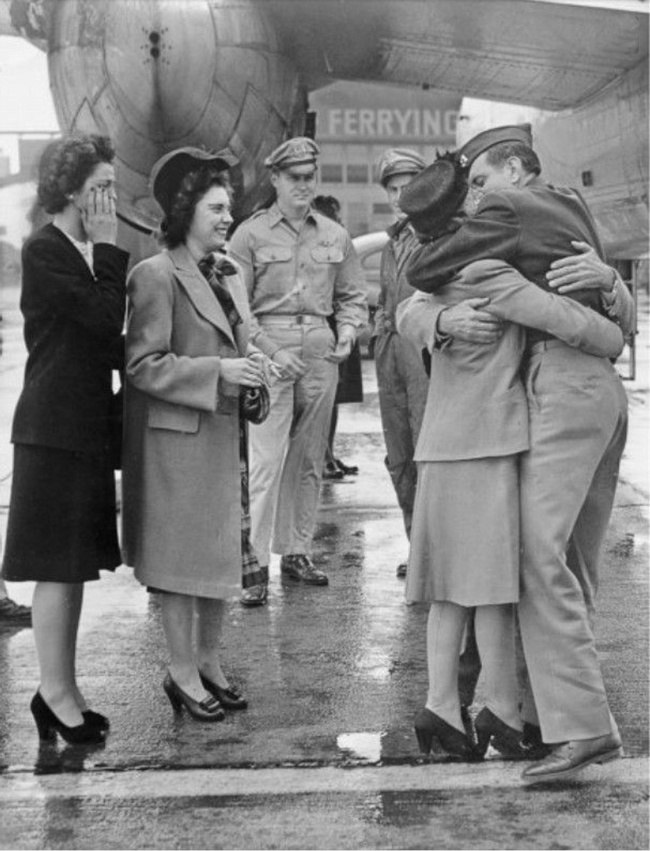 Russian soldiers, too, were excited to be home after a dreadful war in that country with an incredible loss of civilian life. Here this Soviet father rushes to greet his little girl, probably grateful that both had survived. 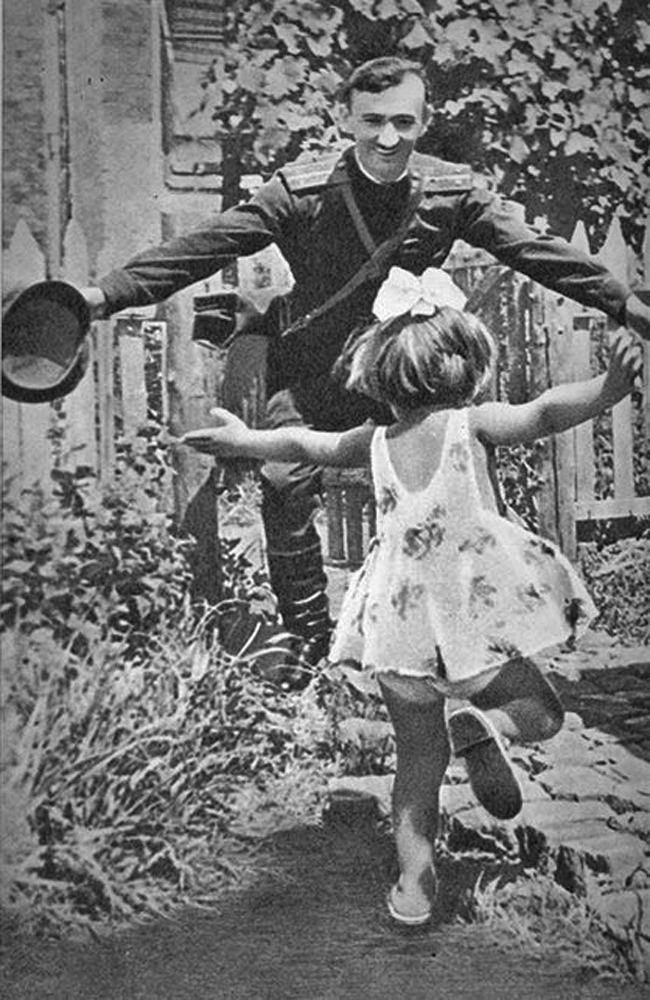 German soldiers were equally welcomed by their loved ones. This is a wonderful photo capturing the excitement of a German woman who couldn’t contain her joy at having her soldier home again. 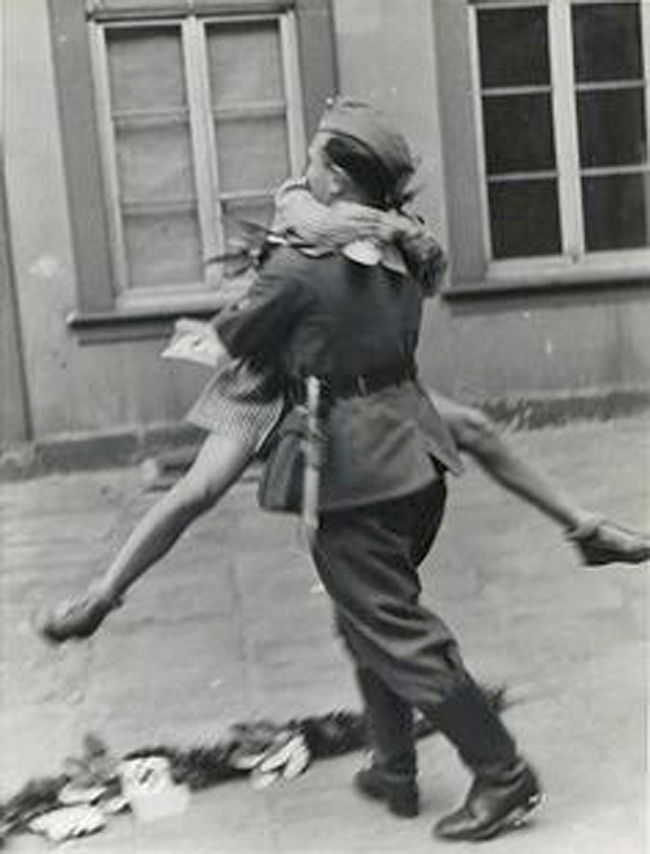 Lucky was the soldier whose girlfriend was loyal enough to spend years waiting for him, as did this one in New Hope, Pennsylvania. 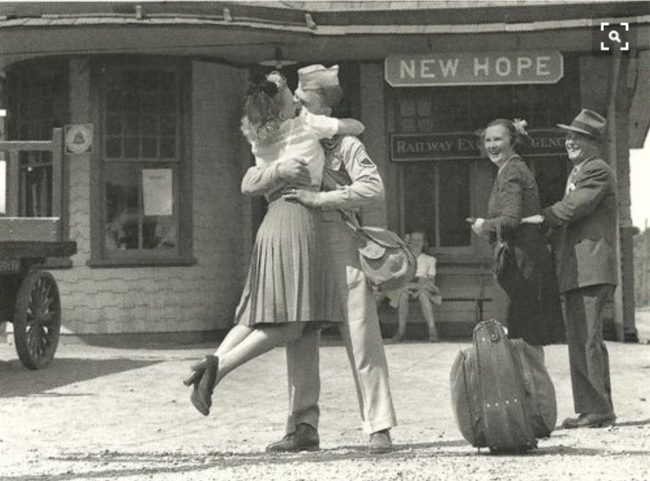 And here’s another touching image of a girl throwing herself on her British boyfriend. (Photo Credit: Getty Images) 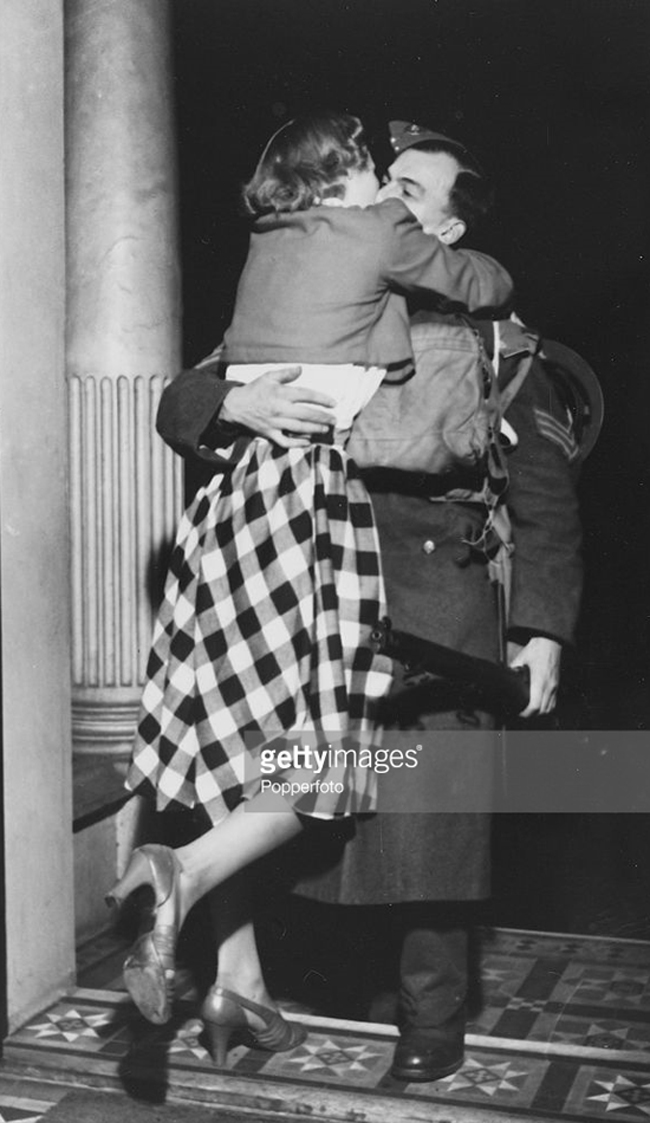 Of course the first thing the servicemen wanted to do was to eat all their favourite home-cooked meals, like this British soldier. His wife is so glad to have him home that she is even cutting up his meat! (Photo Credit: Getty Images) 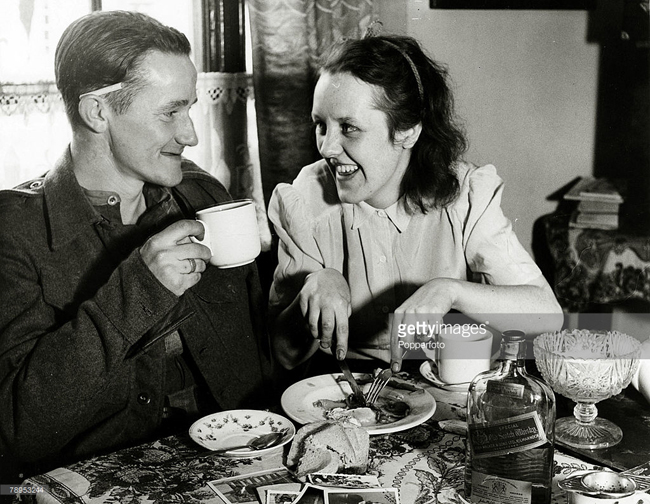 But the guys who didn’t have a wife or girlfriend waiting for them didn’t exactly suffer – they had plenty of attention from the opposite sex! 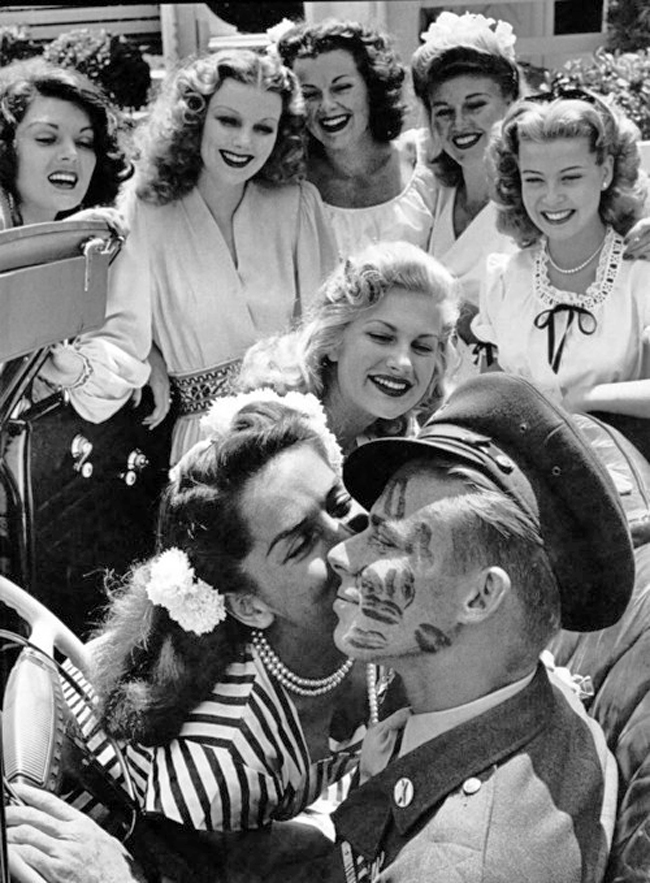 I looked hard, but I couldn’t find any images of returning servicewomen. But this photograph shows members of the RCAF Women’s Division relaxing on deck as they sailed home to Canada. Nancy Lee of Edgewater, B.C. is the second from the left. To read her fascinating story about driving a three-ton truck for Bomber Command in Yorkshire, click here: RCAF Rancherette Blazed the Trail. 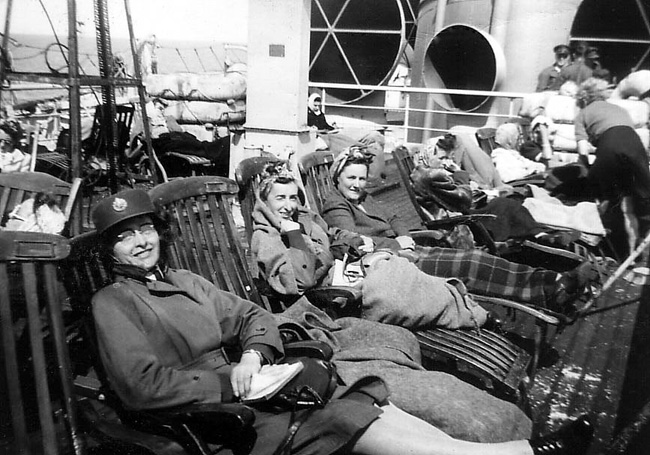 Graphic artists loved to use the sentimental images of the man coming home. They were used heavily for advertising purposes, as in this Back Home for Keeps illustration. In this case it is advertising a new home, for all those newlyweds who were longing to start their new families — hence the Baby Boom! 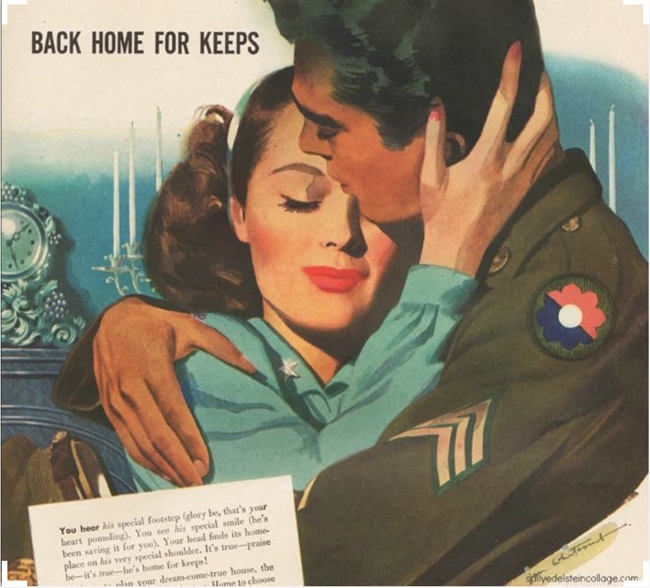 Nobody could create a sentimental illustration like the American artist Norman Rockwell, who kept up a steady flow of images throughout the war. Here’s his famous magazine cover called The Homecoming, showing the entire neighbourhood welcoming home their native son. 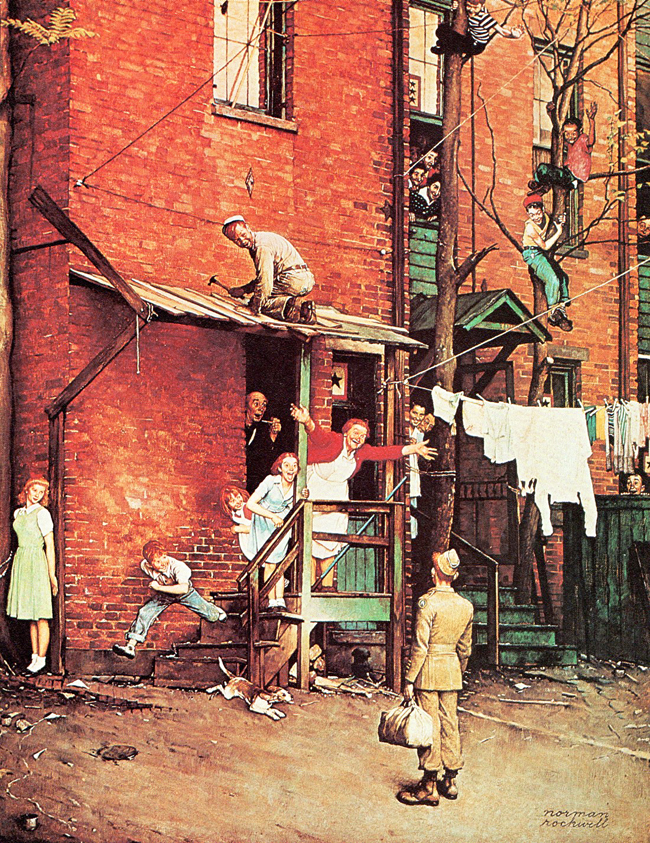 But it wasn’t just men who returned home – British children who had been evacuated to the countryside and even as far away as Canada and Australia came home to their families. This photograph shows the joy on everyone’s faces as they are reunited at last. (Photo Credit: Getty Images) 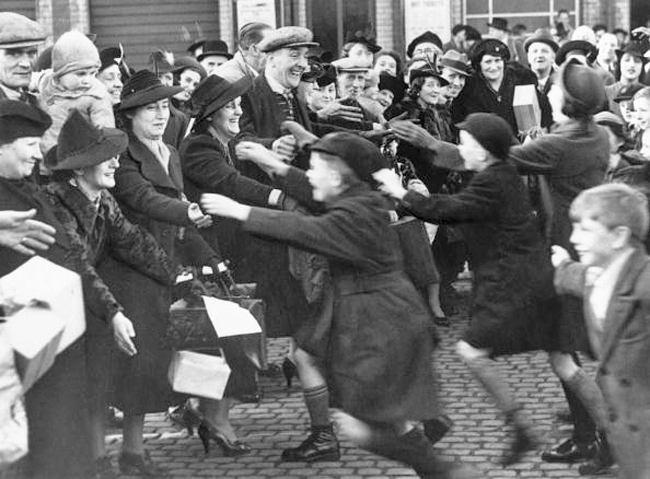 There are numerous stories about returning servicemen being met by their family pets — and even animals they had met overseas. After the war, soldiers who fell in love with dogs while fighting in Europe hated leaving them behind, so the Blue Cross set up quarantine kennels to bring them back to the United Kingdom. Here a sailor greets his dog. (Photo Credit: Blue Cross) 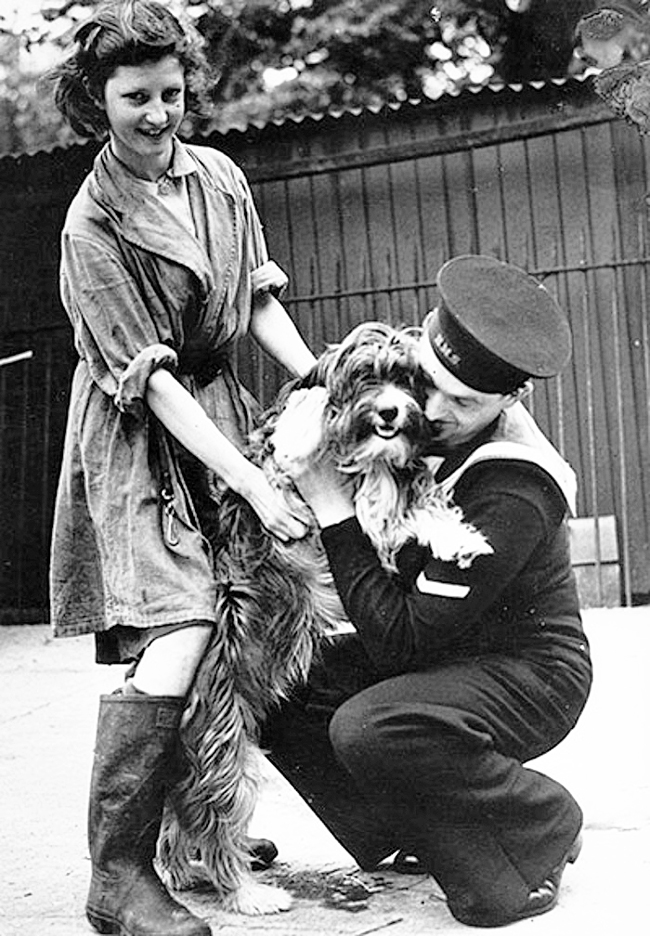 I’ve been saving our own Canadian Star Weekly cover for last, showing wife, daughter, son, and family dog embracing the returning Canadian soldier – who seems to have brought home a German helmet as a souvenir! To see my entire collection of Star Weekly covers, click here: Star Weekly at War. 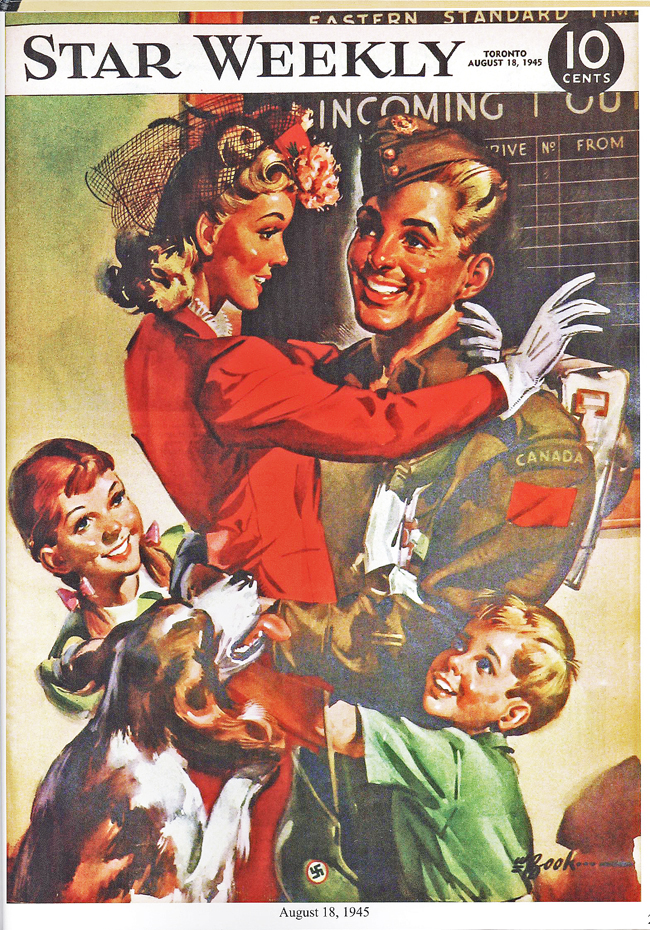