Dear Friends: I am so excited about my invitation to Danesfield House Hotel next May, the setting for my wartime novel Bird’s Eye View, for a book signing! This gorgeous white chalkstone mansion, pictured on the back cover of my book, located one hour west of London near Henley-on-Thames, was the headquarters of aerial photo interpretation during the Second World War. 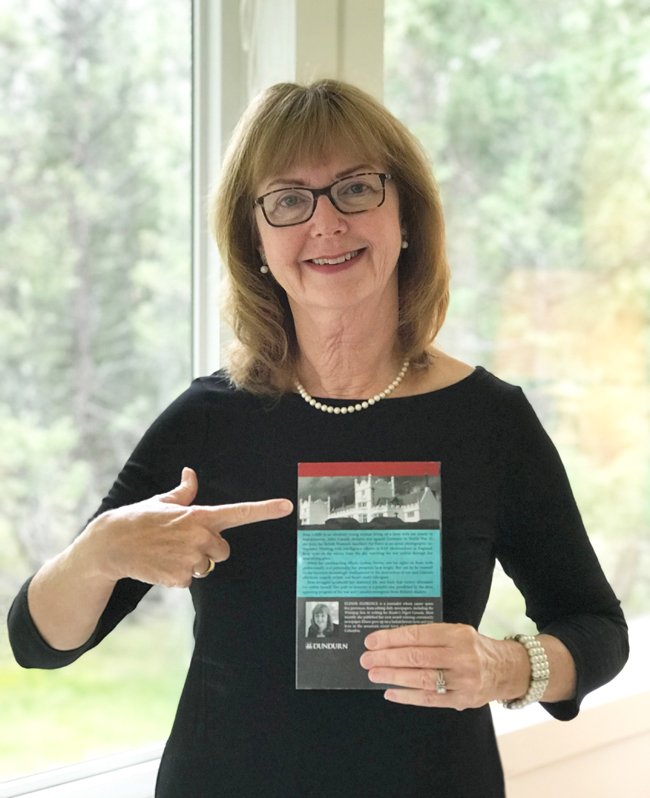 Here’s an aerial view of the luxury boutique hotel (and I do mean luxury — George and Amal Clooney hosted their wedding reception there). 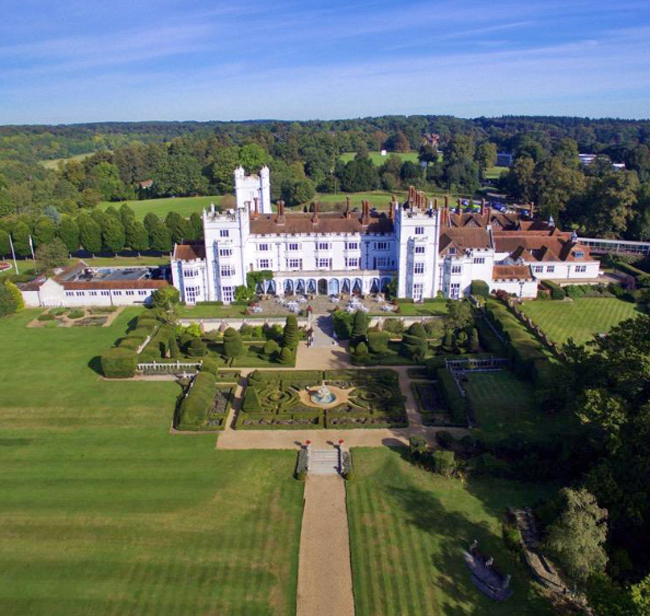 My husband and I will spend several nights in one of these beautiful rooms. 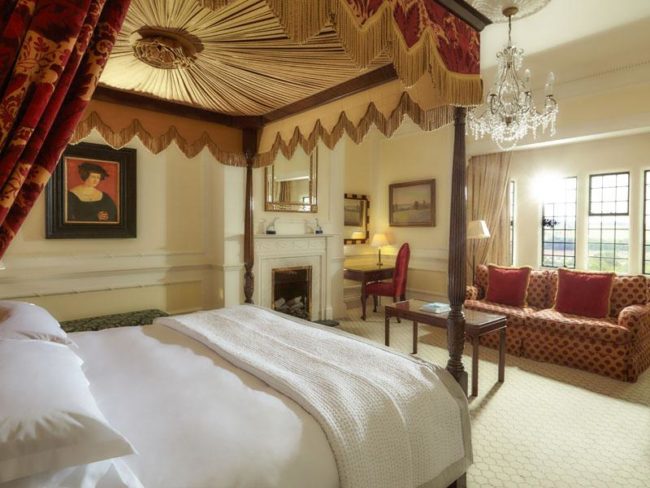 During the war, this private mansion was requisitioned by the Royal Air Force and named RAF Medmenham. These rooms were filled with aerial photo interpreters, studying the photos taken over German-occupied territory by reconnaissance aircraft, searching for bomb targets. My fictional heroine Rose was one of them. Read more about it here: Medmenham: Where the Magic Happened. 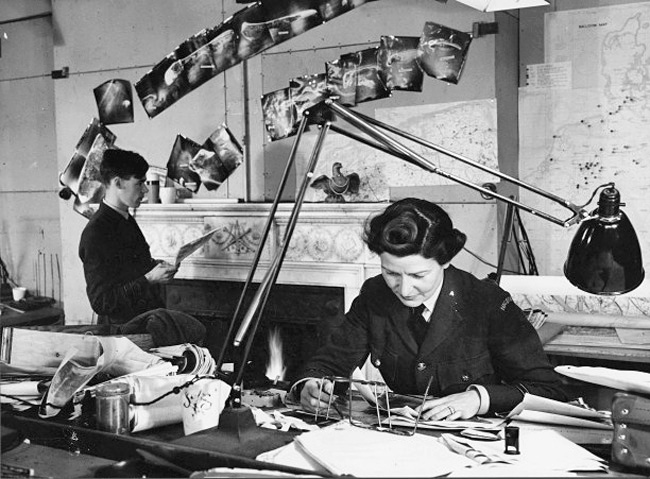 My book is now available in the Danesfield House Hotel gift shop. Here are a couple of staff members perusing the book. 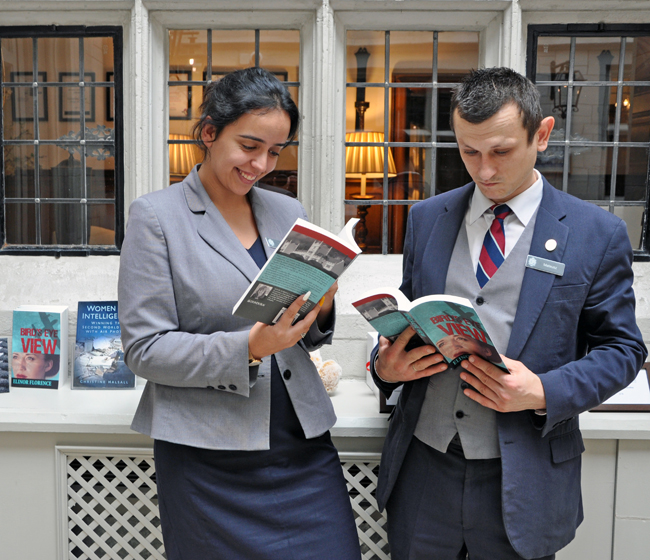 If you know anyone in England, or are planning a trip there yourself next May, please spread the word. I’ll be posting more details as the event is nailed down. It would be delightful to see a familiar face in the crowd! And for more information, do visit the hotel’s website: Danesfield House Hotel.

I loved this work of historical fiction, possibly my favourite genre, and it received rave reviews from my book club as well. 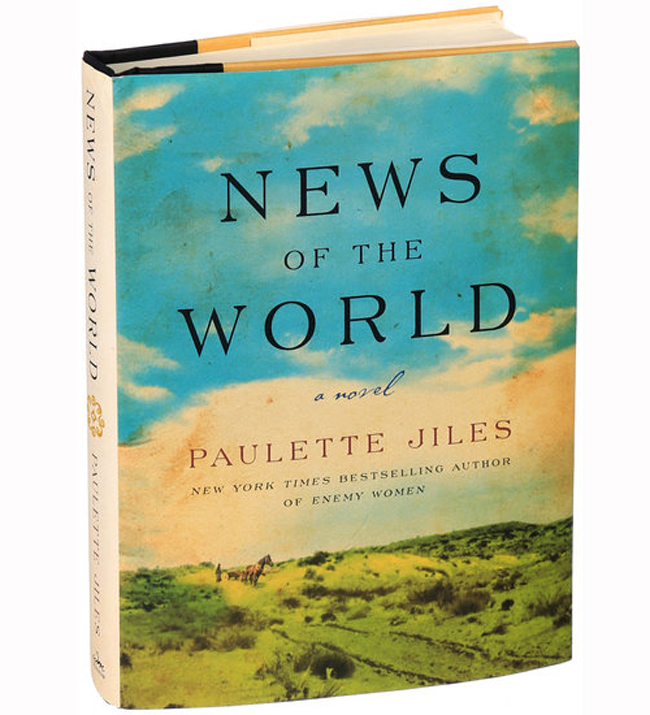 News of the World has fascinating characters, a gripping plot, and a brilliantly-written narrative filled with imagery so rich that I felt as if I were riding in a horse-drawn wagon through Texas in 1870.

The story concerns an elderly gentleman who makes his living reading newspapers aloud to illiterate audiences in small Texas towns. He is hired to deliver a little girl, who has recently been freed after spending four years as a captive of the Kiowa band, to her distant relatives in southern Texas. The territory is wild and lawless, as is the little girl herself, and the pair have many adventures on their journey.

Just one month after posting about Joy Bond’s 101st birthday, she passed away peacefully. Joy was a local pioneer who was born here in 1918 and never left. Her passions were local history and gardening. I attended her funeral last week, along with hundreds of others. These bookmarks handed out at the service are a great idea, and a wonderful memento of Joy’s long, full life. The text reads: “From the Earth We Came, To the Earth We Return, In Between We Garden.”

During the Second World War, Joy trained to defend her home in the case of an enemy attack. Read about it here: Girls Primed to Defend the Home Front. 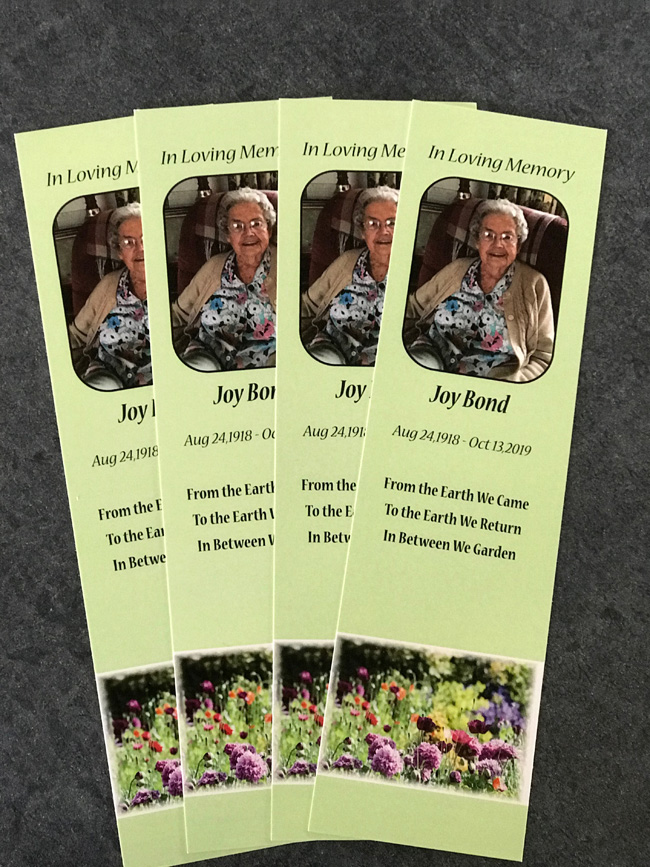 Speaking of local history, October is a good month for a ghost story. One of the most compelling tales comes from my own small corner of the world.

Visitors to the public beach at Lake Windermere must be a little surprised to find this nearby grave belonging to Lady Elizabeth Bruce. 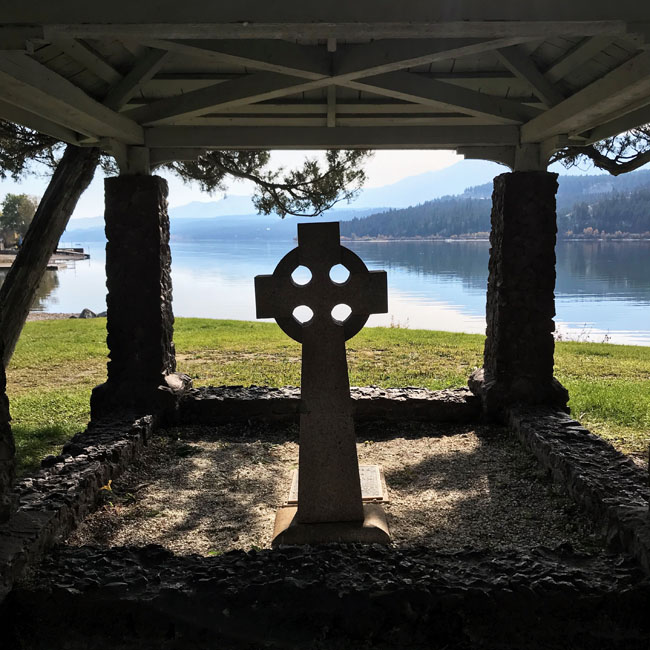 She came out from England as the bride of Randolph Bruce, a local real estate promoter who believed that this valley would become a verdant oasis filled with orchards. (Sadly, the soil and the weather proved him wrong.)

The newlyweds decided to build their dream home on the shores of Lake Windermere, and Lady Elizabeth named it Pynelogs after her family home called Pynes, located in Devonshire. While the log house was being constructed, the Bruces lived on a houseboat floating nearby.

Shortly before the house was finished, Elizabeth succumbed to a deadly attack of appendicitis in 1914. She was never to inhabit her beloved Pynelogs. 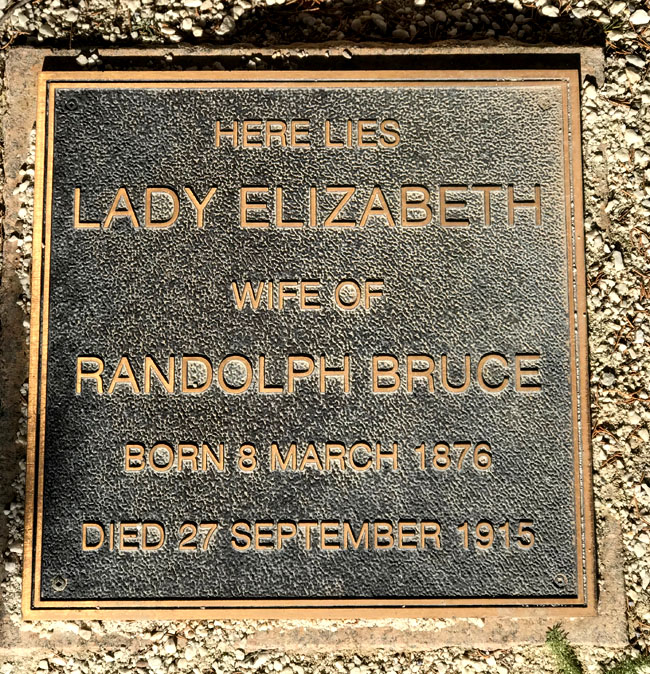 Her heartbroken husband finished the house and lived in it for a few years, then moved to Victoria, the capital of British Columbia, where he became the province’s Lieutenant-Governor and later Canada’s ambassador to Japan.

After he donated the house to the village, it was used for various purposes before becoming the Pynelogs Cultural Centre, home of the Columbia Valley Arts Council. Many art shows and musical events take place in this beautifully restored house. 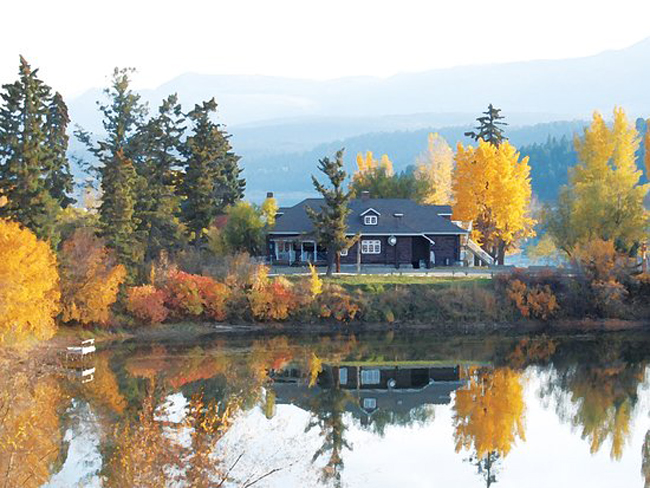 Both my book launches were held in this charming old building, a fitting choice for my historic fiction. When my novel Wildwood was launched here last year, people dressed in pioneer garb and my sponsor, the Invermere Public Library, held a pie-baking contest! 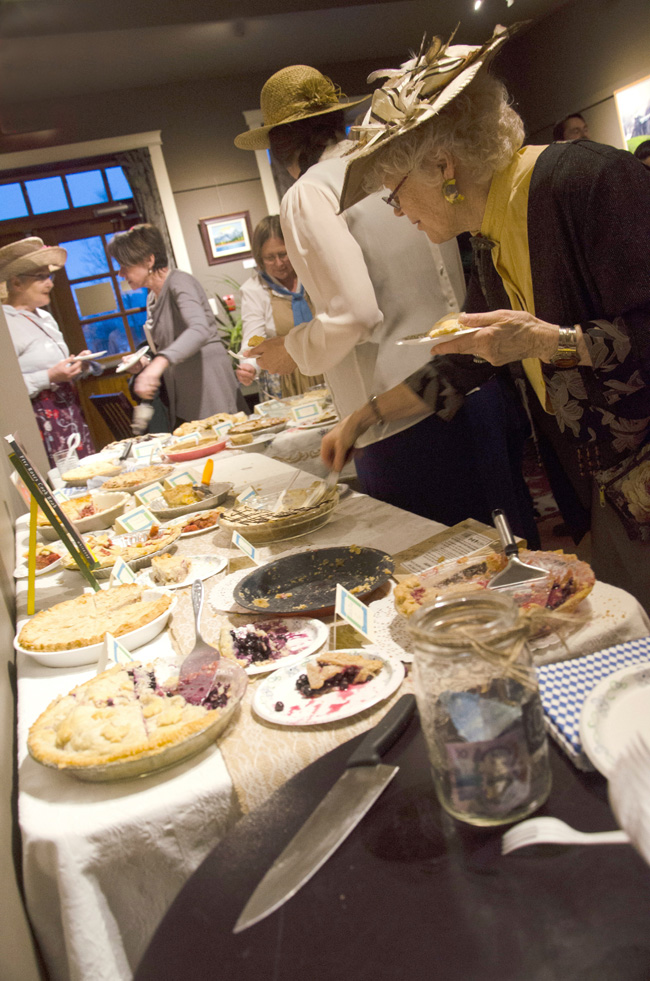 Rumours of Elizabeth’s ghost have been circulating for generations. Even today, when the house is very quiet, people claim they can hear ghostly footsteps.

I hope that Lady Elizabeth might be peeping over the bannisters when an event is held on the main floor below, enjoying the fact that her home is filled with laughter and art and music — and even homemade pie. 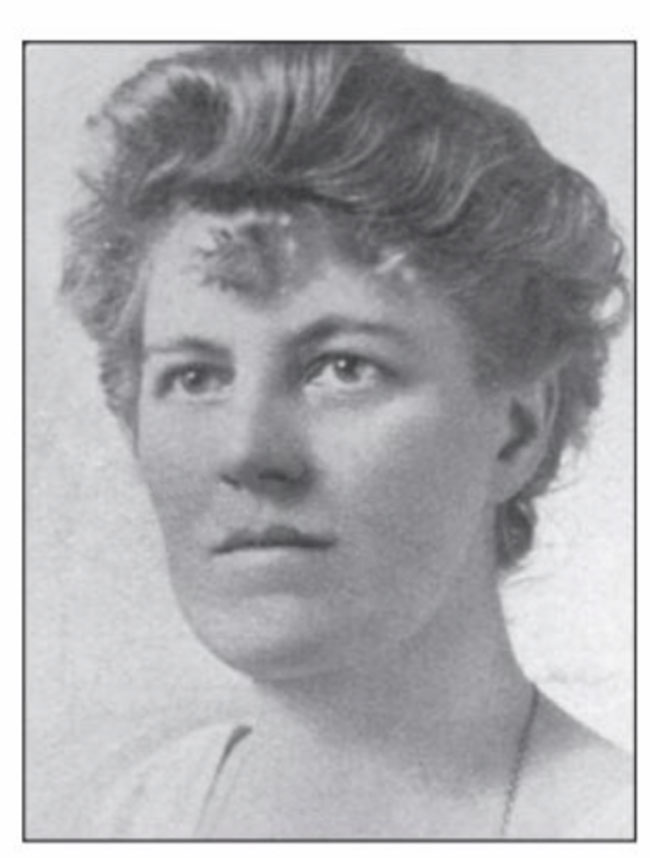 Over the years our family came up with some pretty great costumes — in the days before you could buy everything ready-made. Back in 1995 we were living in Chihuahua, Mexico (we spent 18 months there because my husband was working for a Canadian company building a gold mine in the Sierra Madre mountains), and the three girls and I dressed as witches. (The white lump is a bloody ghost.) 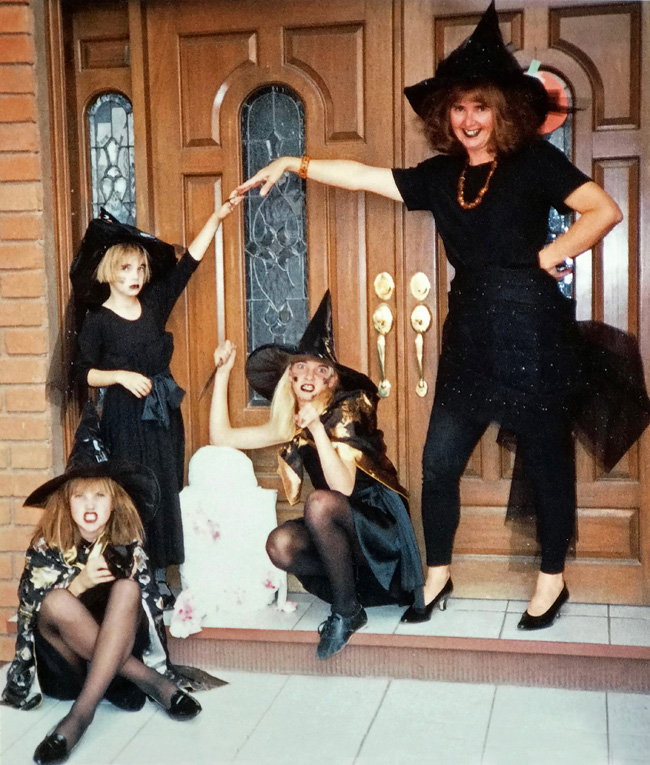 We even had a pitch black cat named Tar Baby, shown here with Melinda, to complete our ensemble. 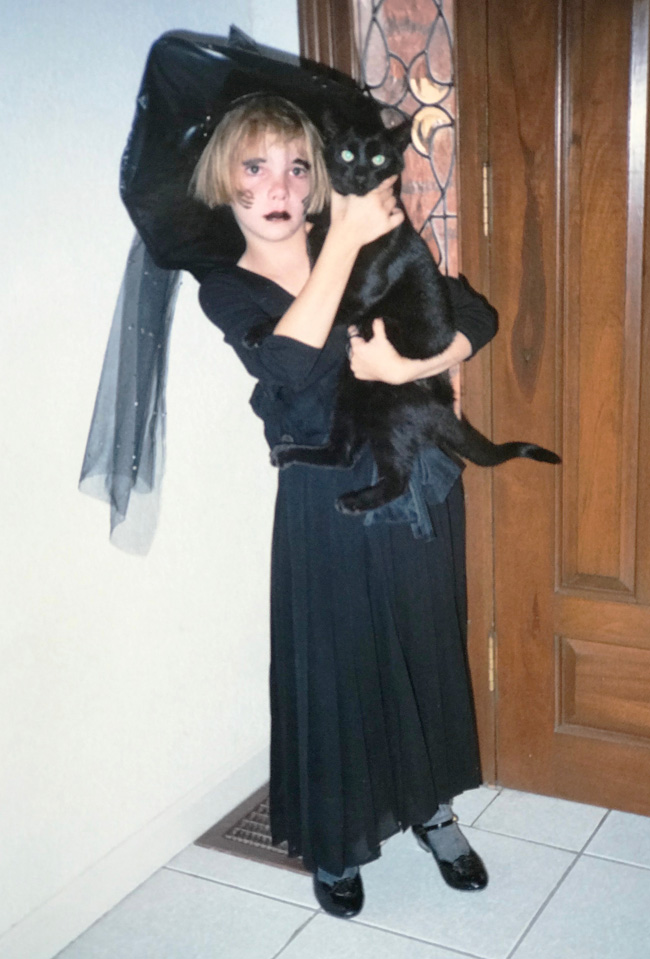 But my memory of that Hallowe’en is also embarrassing. I stayed home with Tar Baby to hand out candy while the girls went trick-or-treating. (When I was a kid, we called it “Hallowe’ening” — does anybody else remember using that expression?)

To the delight of the girls, Mexicans are FAR more generous than we are in handing out treats. The girls came staggering home under the weight of their bags because at every house they received armloads of candy and chocolate bars!

Meanwhile, I was doling out treats two or three at a time, the way we do in Canada. Later I was mortified to think that all those Mexican kids and their parents must have thought we Canadians were awfully cheap! It is just another example of the generous nature of the Mexican people — especially when it comes to children.

I have been a published author for five years! My debut novel Bird’s Eye View was launched in October 2014. That was a busy time, with a whirlwind of book signings across Western Canada.

Perhaps my favourite event was held at McNally Robinson Books in Saskatoon, when my talented niece Tricia Florence, who has the voice of an angel, wearing 1940s garb and my father’s RCAF uniform wedge cap, sang Hits From the Blitz to the assembled crowd. My brother’s kids grew up on the same farm as we did near North Battleford. My whole family turned out for this event, and I am still so grateful for their ongoing support! 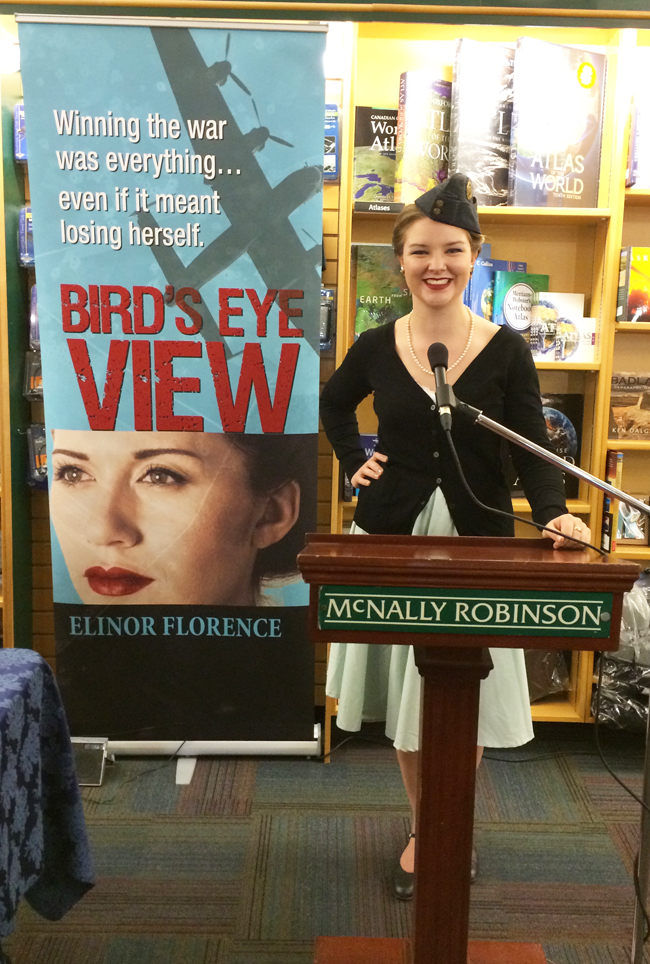 We are enjoying a sunny October so far, although the darkness closes in too soon and the leaves are tumbling down like snowflakes in a blizzard.

Friends, if you know anyone else who would like to receive my monthly newsletter, please pass it along.