Richard Fuller of Niagara Falls, Ontario was a Kid Soldier, only seventeen years old when he joined the militia and began to train as a signaller. When war broke out in 1939, he was one of the first men overseas. His daughter Jennifer Maruno drew on his experiences for her Young Adult book titled Kid Soldier. 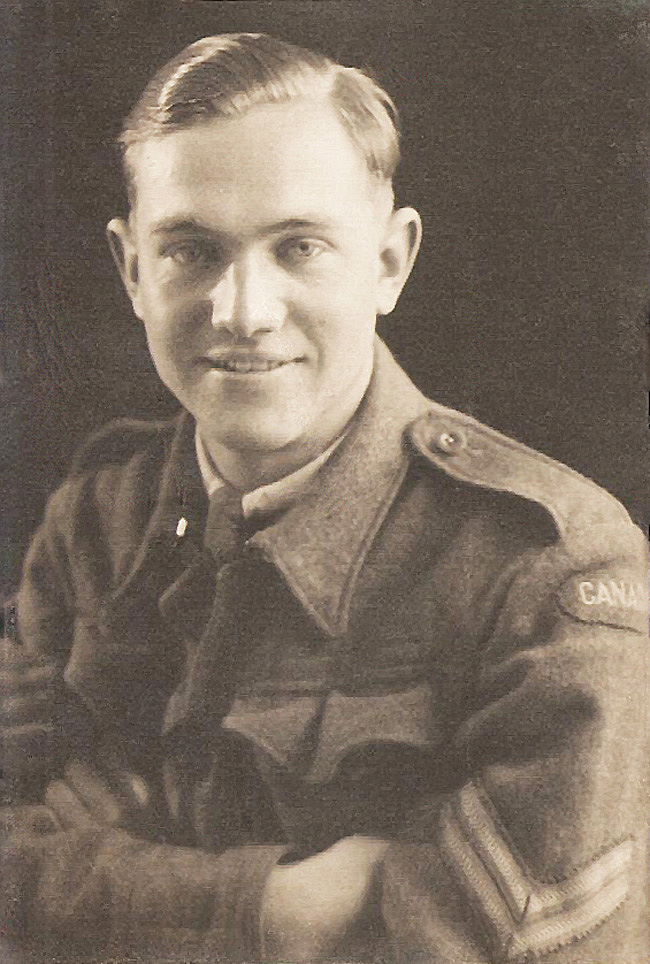 My guest today is Jennifer Maruno of Burlington, Ontario, who fictionalized her father’s experiences for Kid Soldier. Here Jennifer tells us her father’s real story.

Richard Charles Fuller was a handsome man, full of good humour and personality. Born in Niagara Falls on September 29, 1918, he earned money as a delivery boy while attending high school.

Like most guys his age, my father was fascinated with army life. His own father, Richard Arthur Fuller, had gone “over the top” at Vimy Ridge in World War One and survived.

My father’s military career when he joined the militia on June 1, 1935 and went to a summer training camp. He was just seventeen. These camps were held all over Ontario, and it was every boy’s dream to play war in a military camp. You got a uniform, plenty to eat, a small amount of money – next to none – and a chance to learn a new skill. In my father’s case, it was sending messages with flags, lights and radio using Morse Code.

In Camp Petawawa, Richard learned how to lay wire, operate a wireless set and use signal flags. Although he could hardly lift the heavy rifle at the firing range, his all-round performance was good enough to earn the privilege of giving the General Salute for the camp. This photo shows the Signallers being trained at Petawawa, Ontario. 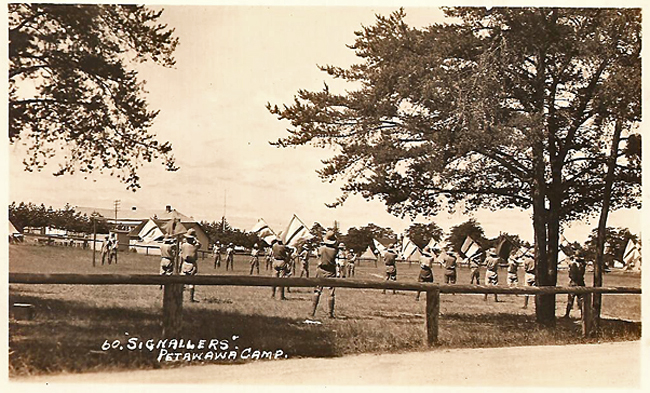 They also learned how to fire guns, and here’s another photo from Petawawa of the boys practising on a Howitzer. 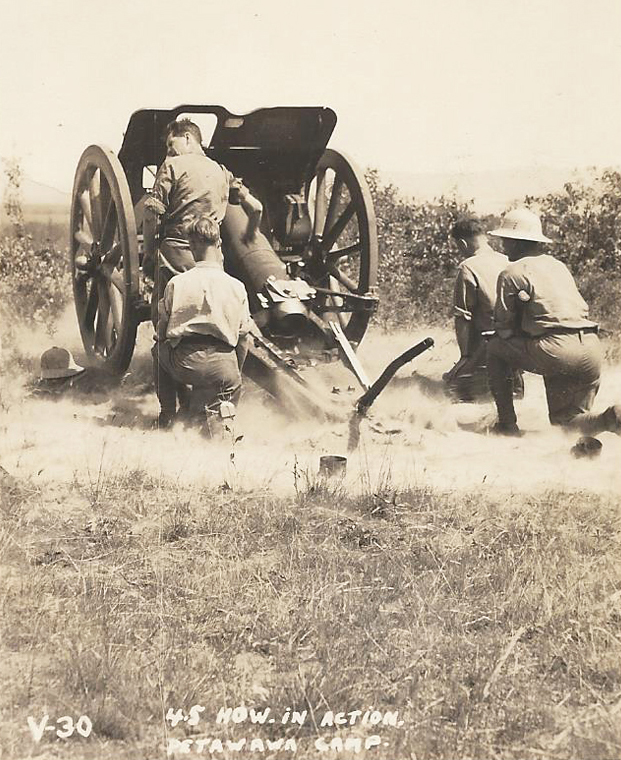 Richard was still too young to join up the first time, but seeing the opportunity arise when another young man did not show, he trained under the assumed name of Chester Lee Huston.

Later my father wanted to serve under his own name. It was tricky establishing his identity with the only piece of identification he owned, which was a library card! You can see how young he looks in this photograph. 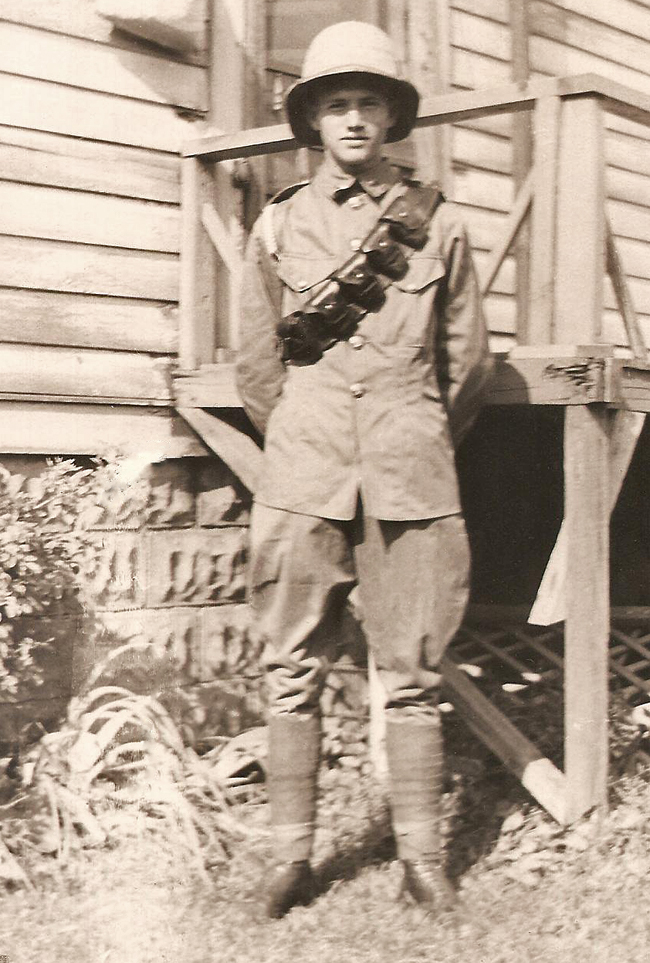 After hearing news at church of the impending war, Richard enlisted and donned the uniform of the 44th Lincoln and Welland Field Regiment.

By this time he was twenty-one years old. Richard’s mother had forbidden him to enlist with the permanent army, and she was so upset when he disobeyed that she stopped speaking to him!

He excelled at signalling in Camp Barriefield, near Kingston, Ontario. When he learned that an advance party of troops was going to England, he volunteered to go with them.

He was first sent to St. Catharines, where the troops were gathering. His sister came to see him off, but his mother refused. Here’s a photo of Richard with his sister Amy. 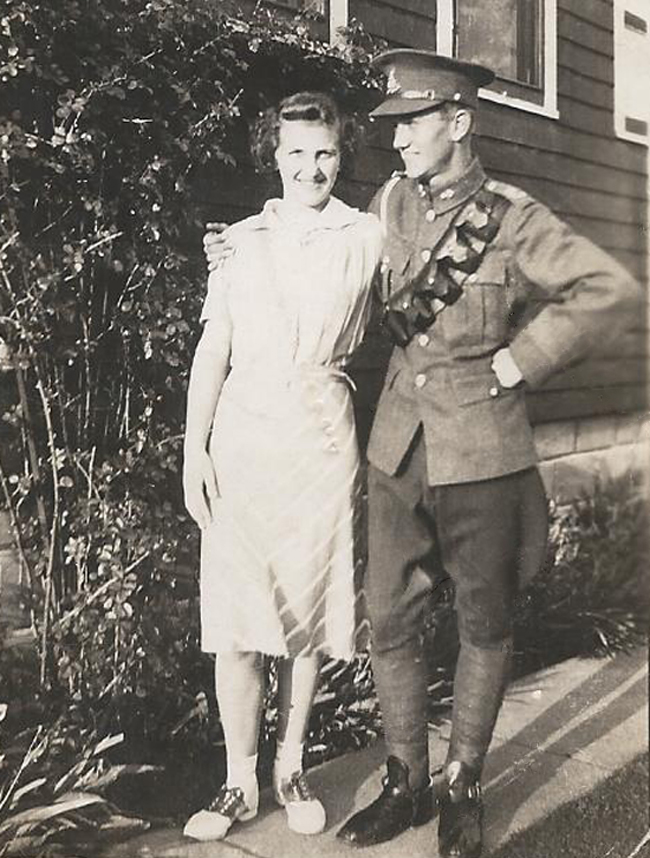 In Hamilton, five thousand troops congregated. It must have been a stirring sight! Here’s a photo of them marching down the street in that city.

From Hamilton, they were transported by lorries, motorcycles and cars to Toronto. They stayed overnight on the grounds of the Canadian National Exhibition, and slept in the stalls used for horses at the Royal Winter Fair. Then they were taken by train to Halifax.

The 1st Canadian Division had mobilized even before the formal declaration of war on September 10, 1939. Three months later, the first convoy crossed the Atlantic in style on The Empress of Britain. The men ate their meals in the dining room on linen tablecloths using sterling silver cutlery, with stewards to make their beds. (The Empress of Britain was sunk the following year by a German submarine.) 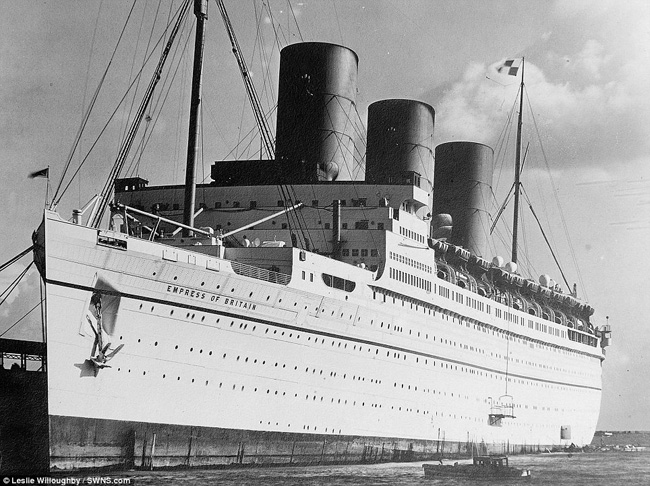 It wasn’t until he reached his base in England, Leipzeig Barracks on Ewshott Common, did Richard realize how pampered the troops had been! Leipzeig Barracks in Fleet had been built for the Boer War, at the turn of the last century. The soldiers had to make them liveable before they began training. The bullet-hard beans for breakfast resulted in a huge food fight. Even the officers took part in what became known as the Battle of the Beans. The cook was replaced!

Richard trained in England during what was known as the silent war, those first months when Germany and the Allies faced off without taking much action. He proved to be adept at managing a motorcycle, which gave him the opportunity to ride one throughout the war.

He rode a Norton, wearing a soft helmet with goggles. Notice the gun on his hip and the rolled up raincoat under his seat. The Maple Leaf insignia gave the Canadian troops the nickname “the Maple Leaf boys.” He took on a nickname as well, and became “Dick” Fuller from then on. 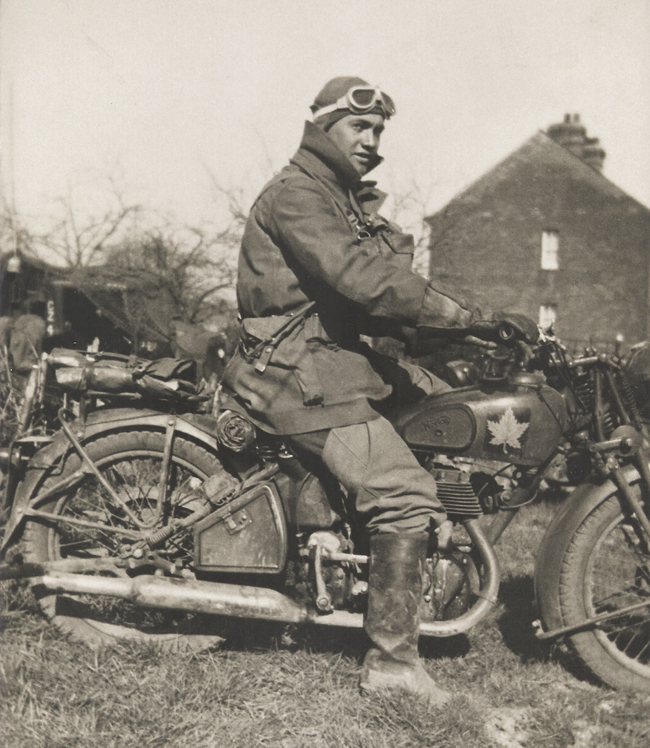 My Dad’s bike didn’t have a radio. They were pretty bulky things back then, even the so-called “personal” radios. Communication was by telephone, which involved laying a land line wherever they were, from the Observation Post to the gun position. This was a more secure form of communication, since you had to patch into the line to hear what was being said.

He told a lot of stories about laying the line or repairing the line, which would be hairy at the observation post end because it was at the front! Here’s a photo of Richard in full gear. Note his gloves carry his nickname, Dick. 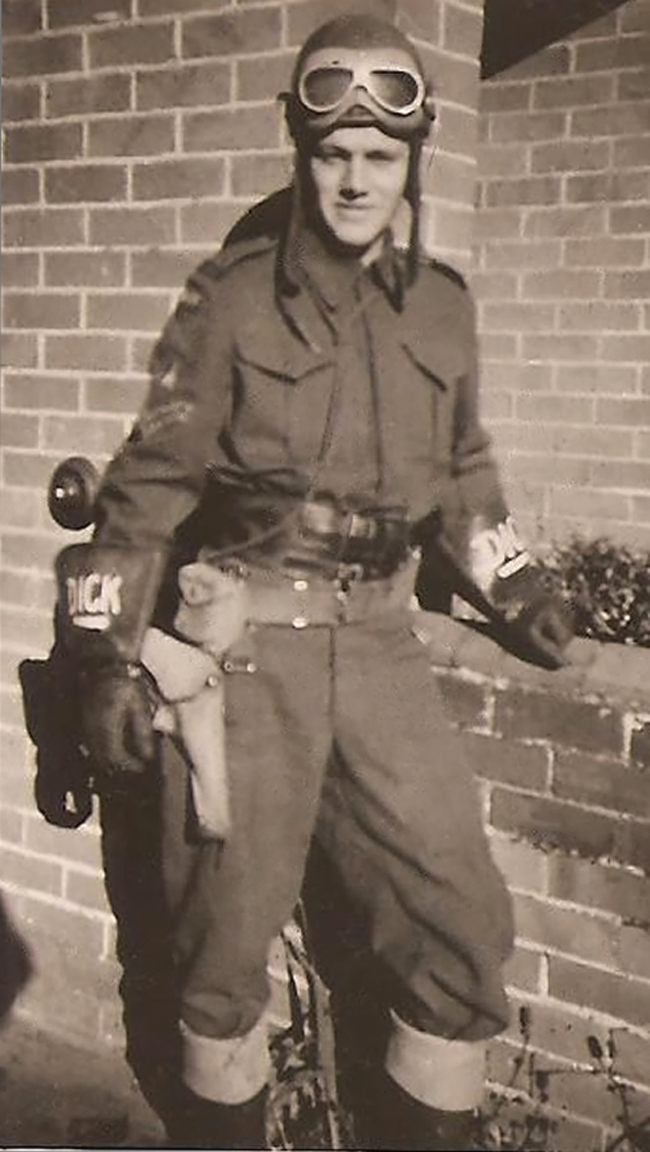 My Dad remembered the exact day and hour that the bombing of London started. It was 5 p.m. on Saturday, September 7, 1940, when almost one thousand German and Italian fighters and bombers attacked. “Blitzkrieg,” or lightning war, was the term used to describe the German armored punch that was fast and furious and totally confounded the enemy. It was a great way to attack, either by air or land, but a poor way to defend.

The main objective was the densely populated East End, Beckton Gas Works and Woolwich Arsenal. For my father, the bombing became extremely personal. He had relatives on his father’s side in Woolwich and often spent his leave in their company.

Not only did Richard live through the Blitzkreig, he had many adventures over the next few years. He was an eyewitness to the Battle of Britain, the air war over England between the German and Allied fighters in 1940. He witnessed the death of a German pilot when a plane went down.

In spite of everything, Richard always said that was the best time of his life, for he met my mother in London during his leave. Here is a photo of my parents, Richard Fuller and Janet Dunsmore, before their marriage. 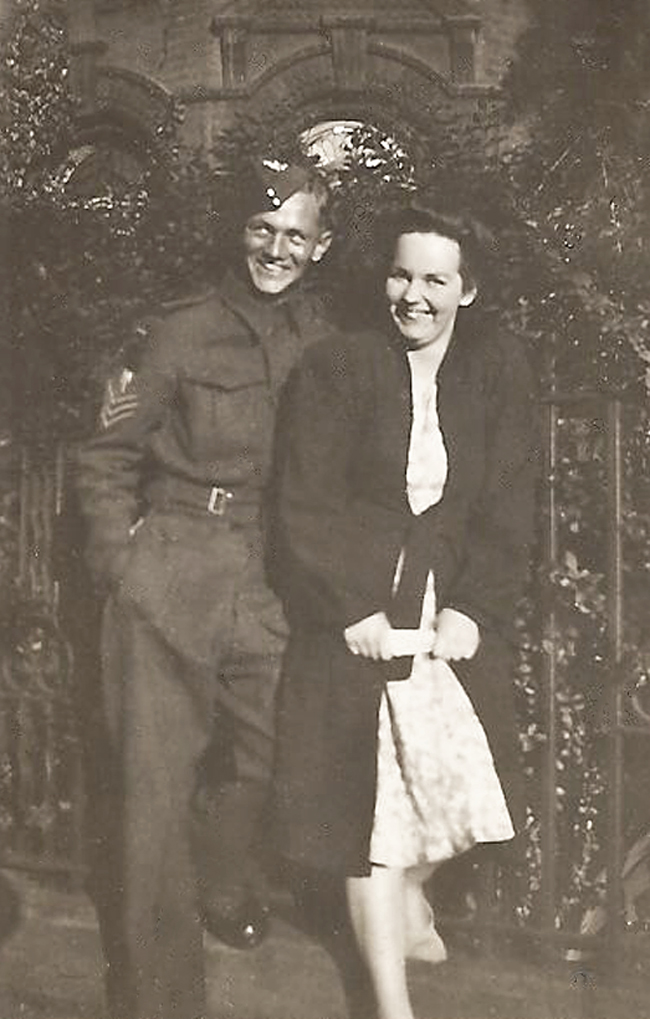 When their Majesties King George and Queen Elizabeth came to inspect the 1st Canadian Division, Richard rode in the cavalcade. The regiment then proceeded in convoy to Larkhill on Salisbury Plain, to camp beside the famous mysterious rock formations of Stonehenge. There, Richard operated the wireless set during the training of live ammunition. 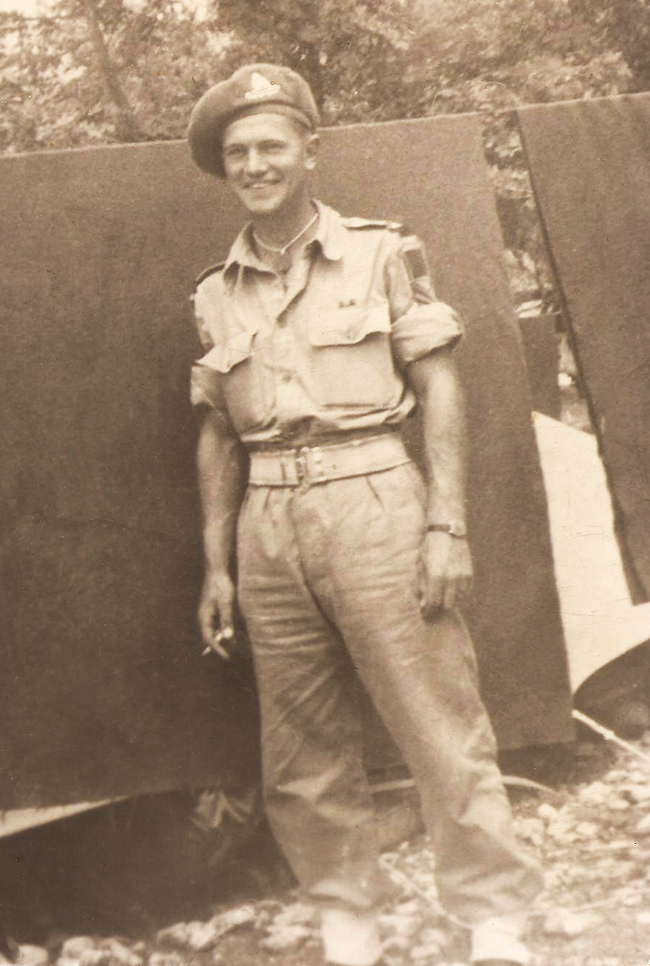 The division trained in England for three years before taking part in the Invasion of Sicily in July 1943, liberating Italy from Mussolini.

In Italy, the Canadians landed in Salerno and worked their way through Cassino, Anzio, Florence and Rome. Richard laid communications lines and operated the radio the whole way. He often talked of the excitement of moving through the underground catacombs of Rome.

When D-Day arrived on June 6, 1944, and the Allies invaded France, my father was in Italy. The men who did not partake of the great D-Day invasion became known as the D-Day Dodgers, a nickname they took on proudly, forming an association that continues to this day with conferences and support for the veterans who still remain. This photo was taken in Sicily. 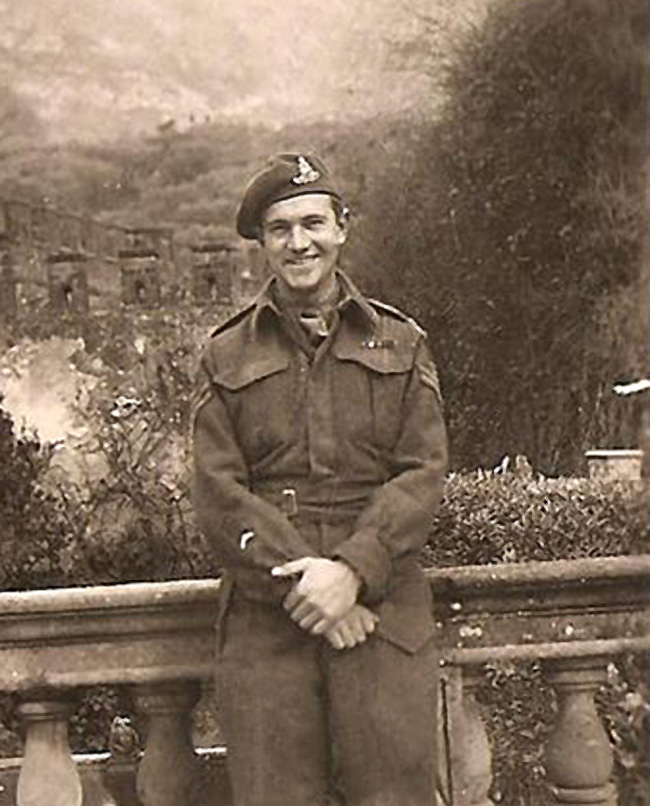 After the war my father remained with the militia, eventually receiving the commission of Lieutenant. My memories of those days were of Army picnics, Warriors Day at the Canadian National Exhibition, Christmas parties and many ceremonies and parades. Even though he wasn’t supposed to, he always gave us a special wink when he marched by.

Here’s a 1957 photo of our family with my Dad, my mother Janet, my ten-year-old brother Kenneth and me, aged seven. 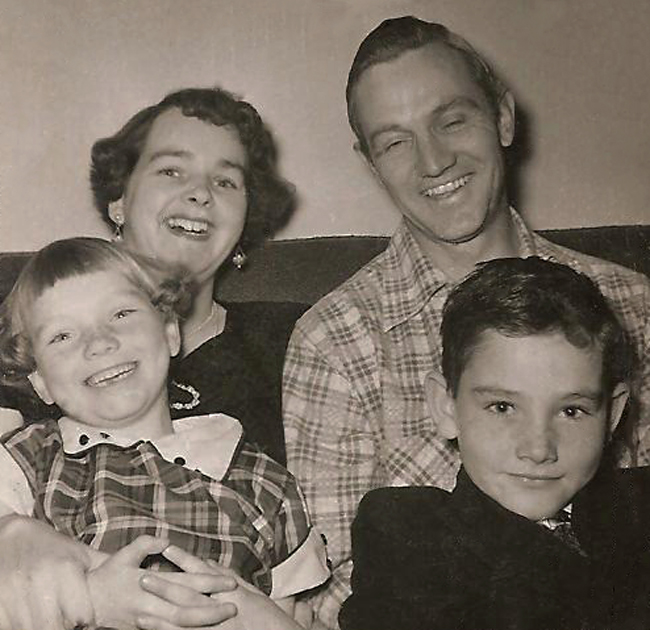 His war buddies often came to visit, and when they did, my brother and I sat on the stairs to listen. They relived the parts of the war that were dangerous at the time but funny later on, like getting lost inside enemy lines and having to sleep in a tree, or digging up potato plants in a field but replacing them with canned potatoes so they weren’t actually stealing from the farmer!

In 1965, Richard accepted an invitation for a mess dinner at the Royal Artillery Barracks in Woolwich, England, followed by a garden party at Buckingham Palace, in honour of the Colonel Commandant and officers of The Royal Regiment of the Canadian Artillery. 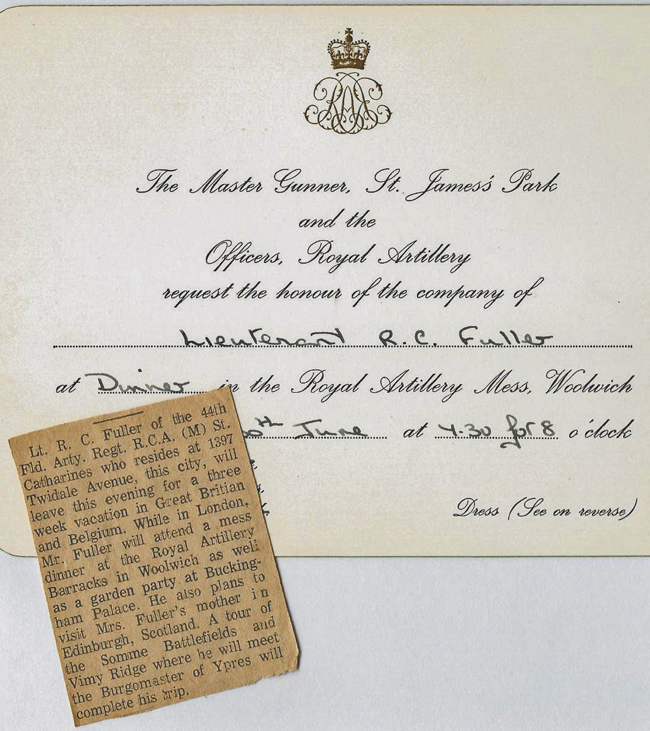 There he shook hands with Queen Elizabeth II and spoke of her visit to Niagara Falls as a young queen.

He kept the white glove that he wore on his hand that day hanging on the wall near the front door. And when anyone asked its meaning, he invited them to sit down and listen.

When my father passed away in 1997, I found to my surprise he had left me a collection of memories, notes and poems. I used my Dad’s underage adventure as the basis of my novel.

This black three-ring binder had funny anecdotes like this:

“Kingston was cold and there was always a wind sweeping through there. We had no greatcoats to protect us, so that was another reason to stay in barracks! We had most things at the barracks, except a cinema, so there was no reason to go into town, unless you just wanted a change of scenery, or a female. Oh, yes, we had been warned on our first parade, by our Camp Sergeant Major about female companionship and where to find it. In other words, DON’T GO NEAR THE DEE SISTERS, WHO LIVE AT SUCH AND SUCH AN ADDRESS ON BROCK STREET.”

Even today I can’t visit Kingston and see the sign for Brock Street without smiling!

My father often told me if it hadn’t been for the war he would never have left Niagara Falls. In this way, his dream of seeing the world was realized. Richard Charles Fuller was my inspiration for my novel. To order it, click here: Kid Soldier. 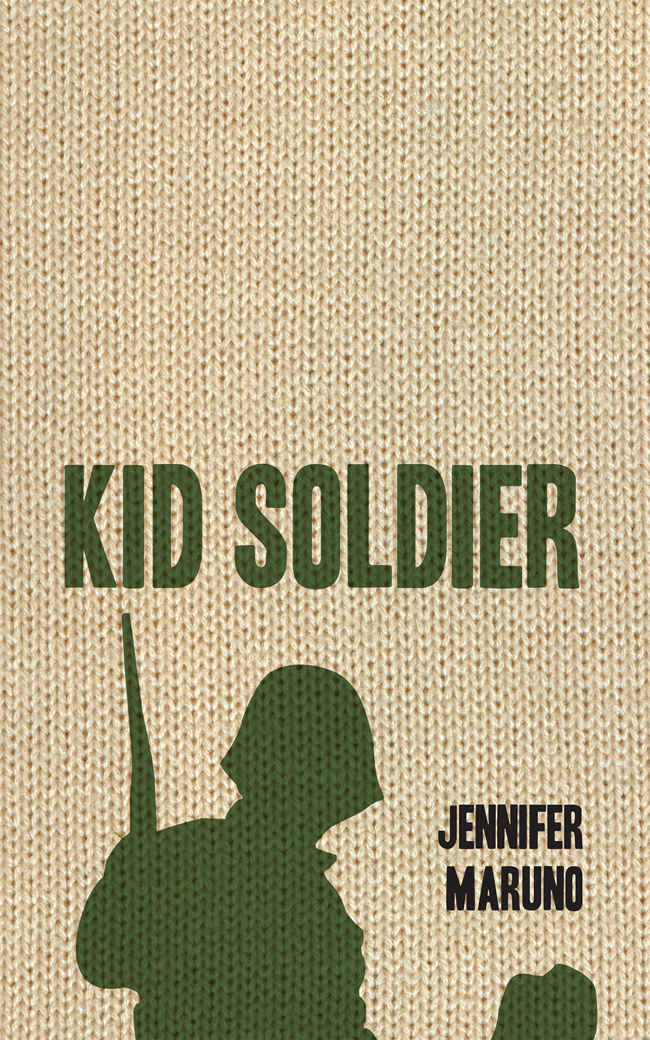 Jennifer Maruno is a long-time educator. Her debut novel, When the Cherry Blossoms Fell, is about the experiences of her mother-in-law in a Japanese internment camp. She is also the author of Cherry Blossom Winter, Warbird, and Totem. Find all her books on Amazon.ca.

Jennifer lives in Burlington, Ontario. Read more about her at www.jennifermaruno.com. Thanks for the great story, Jennifer!

The Star Weekly was a Canadian newsmagazine published by the Toronto Star. During the Second World War, a colour illustration with a wartime theme appeared on the cover each week. Here’s an image showing the British Army’s advance through Libya. To see my entire collection of covers, click: Star Weekly At War. 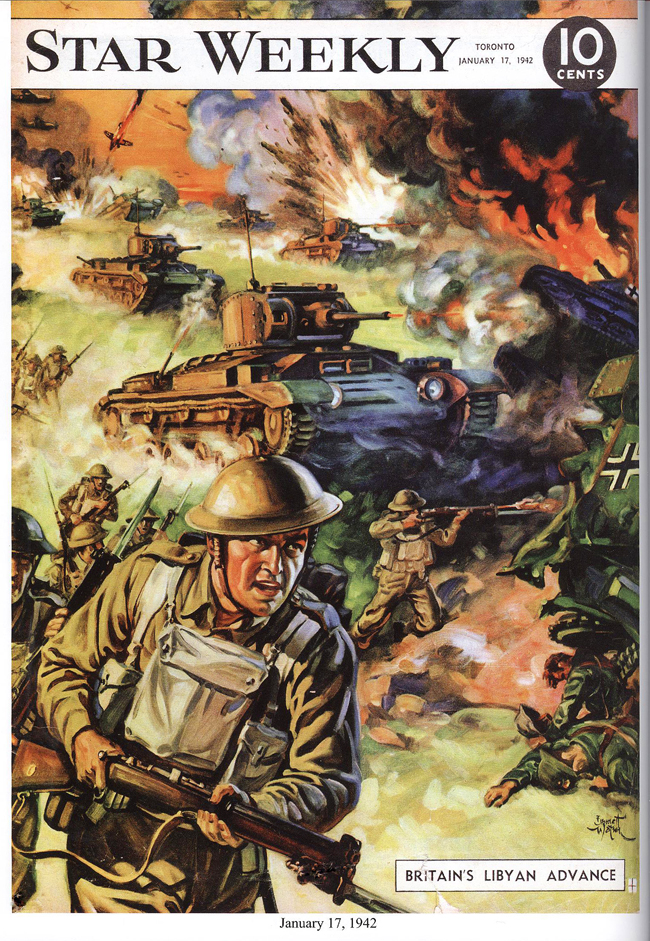