My New Year’s Resolutions were much easier to define with this handy-dandy exercise. It helped me come to grips with my goals for the next twelve months. 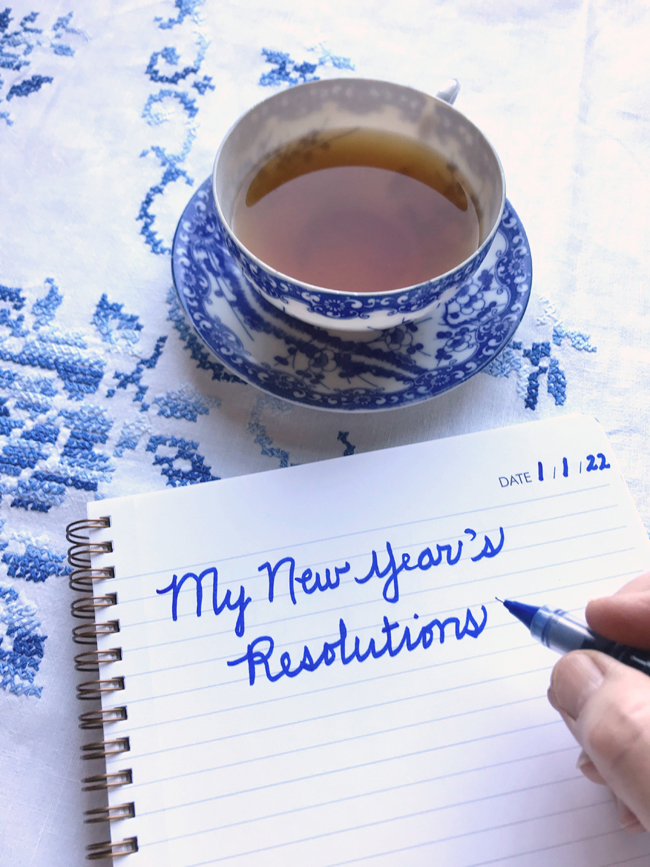 Several years ago, I signed up for a weekly newsletter written by a very nice guy named Dan Blank, who lives in New Jersey with his wife and kids. His company WeGrowMedia helps authors, artists and others establish their careers. He came up with this process called Clarity Cards, and I have used it for the past four years. It applies to everyone, not just creative types.

In a nutshell, here’s how it worked for me.

Take a deck of index cards or sticky notes and write down each activity you perform, including work, family, social and hobbies. Then write down every activity you want to do in future. This is called The Brain Dump. I ended up with about thirty cards, although you might have twice that many. 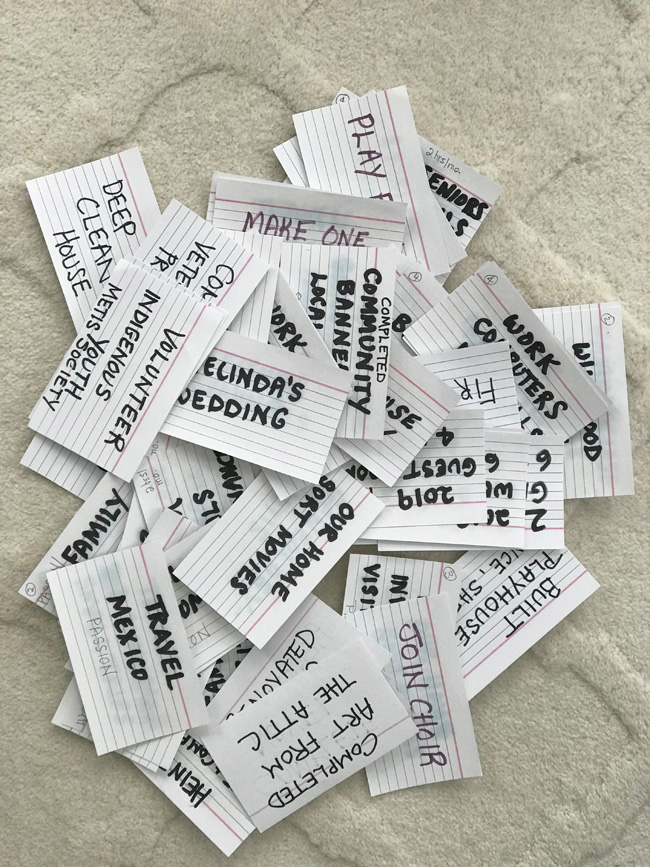 Then you sort them into three priorities: Low, Medium, and High.

Once you have identified the Low Priority cards, set them aside.

The next step is called The Battle. Unfortunately the things I want to do take up more than 24 hours a day — and that’s not counting the things I have to do! So I had to get really specific. Some of the cards will carry equal priority, so here is where you make the tough choices. YOU CANNOT DO IT ALL.

At the end of the exercise, hopefully you are left with ten items in a pyramid shape, with your greatest passion at the pointy end.

Here’s a photo of Dan with his ten-card pyramid, and a link to his website where you can download the whole process: Creative Clarity. 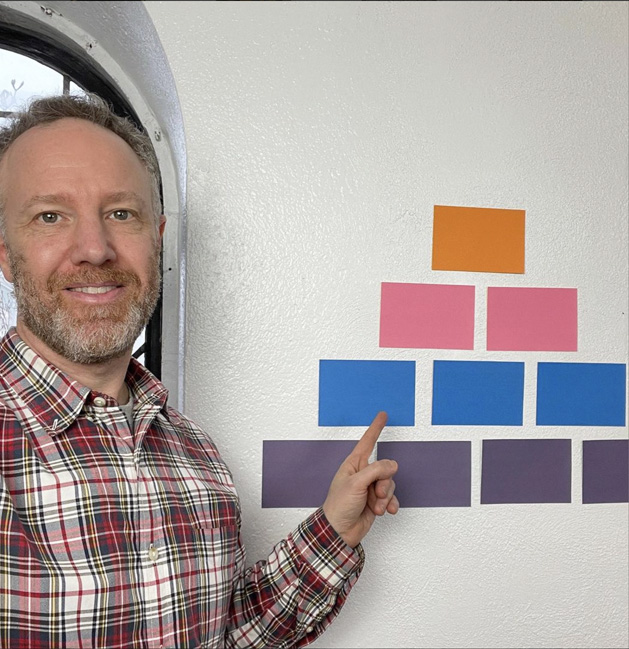 I’ve done Creative Cards for the past three years, and I have dismantled my former pyramids. But I kept these cards, because it was satisfying to go back and look at all the things I achieved. 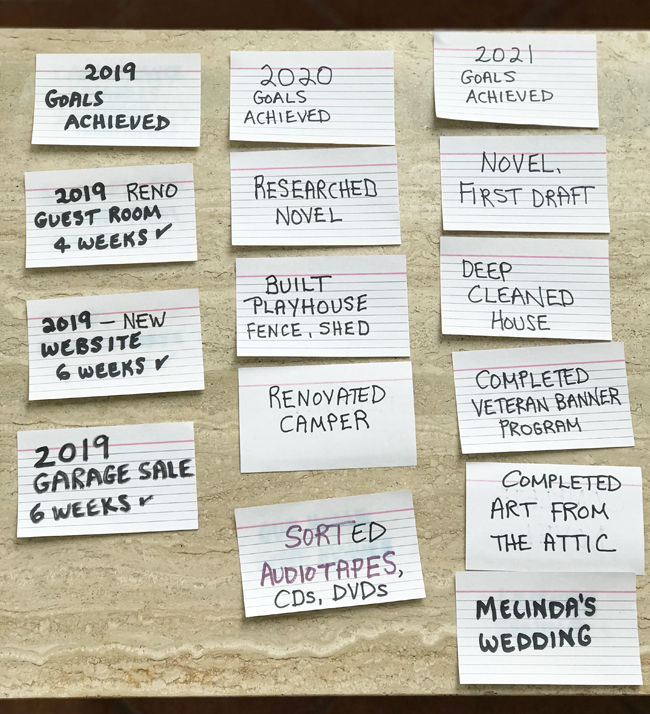 In 2019, I wrote about renovating our guest bedroom, which took four weeks. See more photos here: Room With A View. 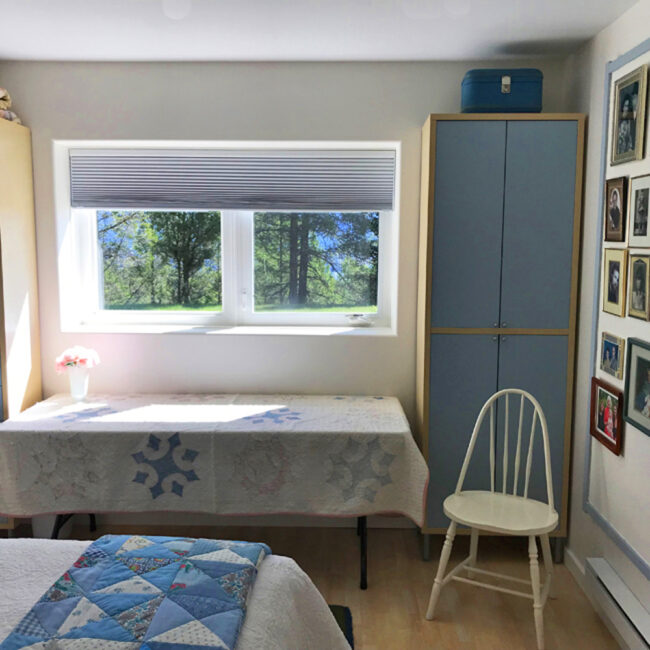 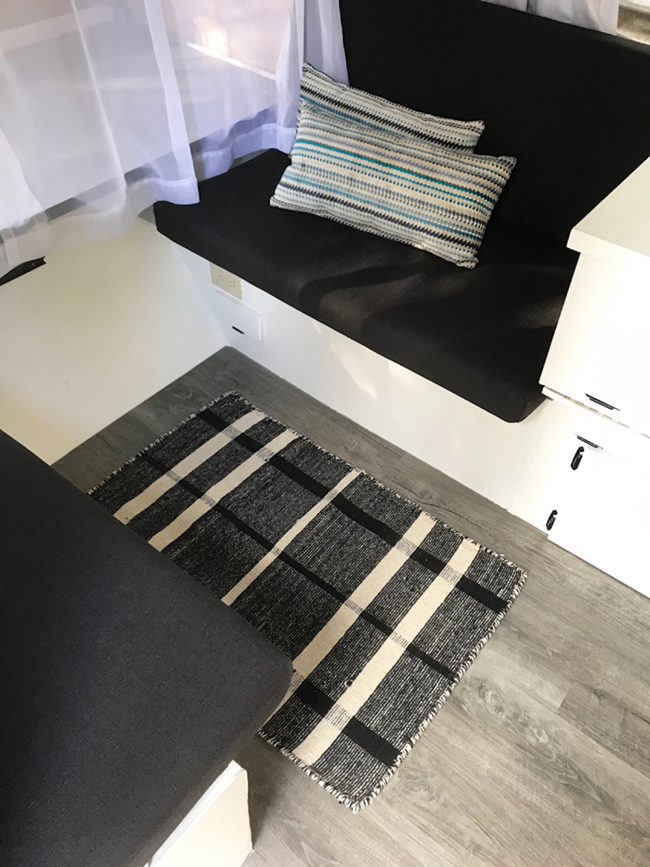 In 2020, we also built a treehouse for the grandchildren. See more photos here: We Built a Treehouse! 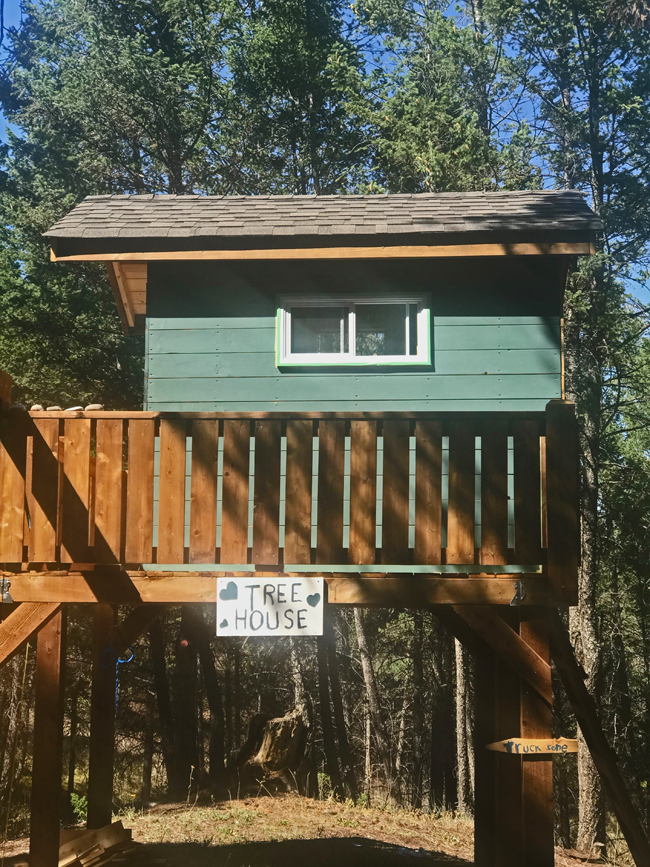 In 2020 I sorted all the audiotapes and CDs, which was a huge task because I listened to every single one before deciding whether the music was worth saving. I made a list of keepers, and my husband downloaded all the music, so we now have digital copies. 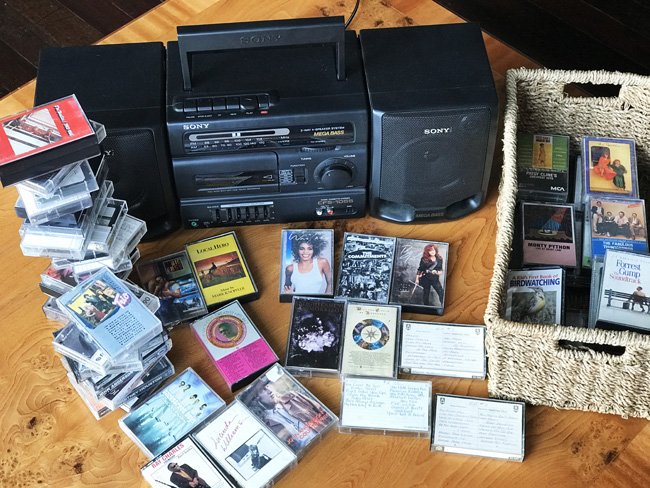 I choose to be involved in one volunteer activity each year, and for the past five years I have worked with the Honour Our Veterans banner program in my town of Invermere, British Columbia. My involvement concluded in 2021. See more photos here: Honour Our Veterans. 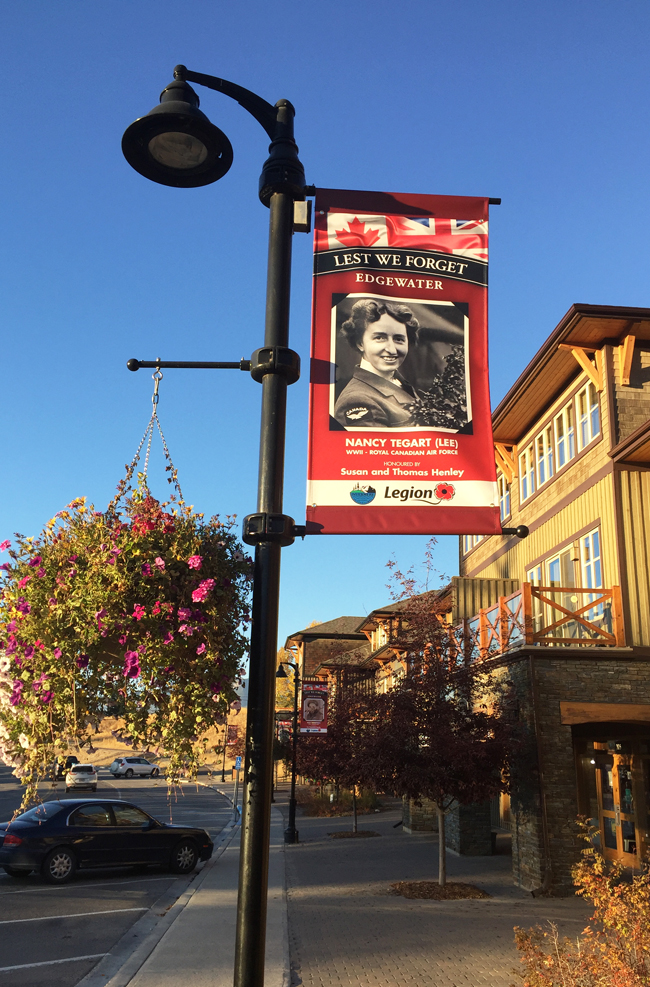 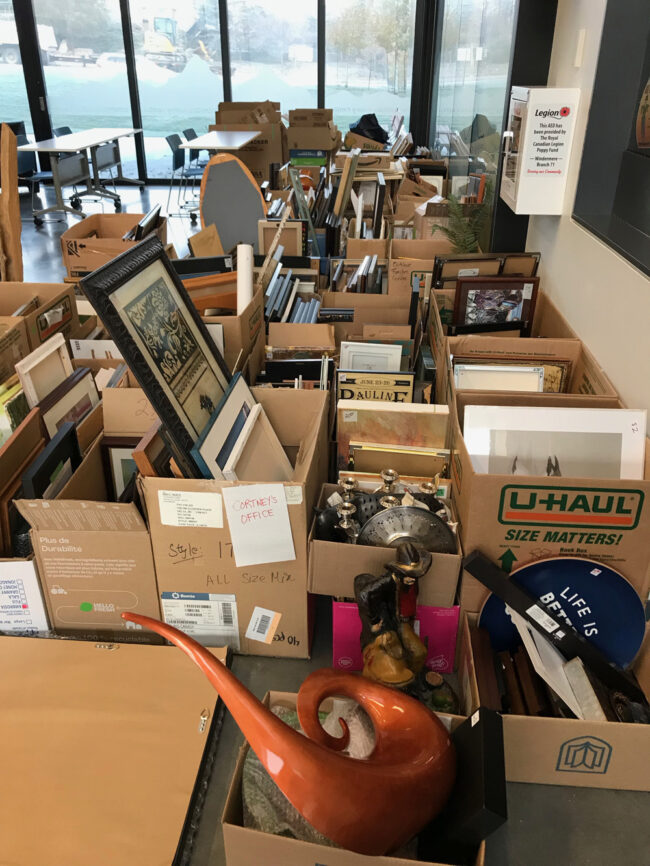 Our daughter Melinda was married in September, and because it was a small wedding there wasn’t nearly as much organization as when the two older girls got married. I still had to do a fair bit of covid planning, not to mention finding the all-important Mother of the Bride dress! (Ladies, you know what I’m talking about — I spent days trying on dresses in various changing rooms!) 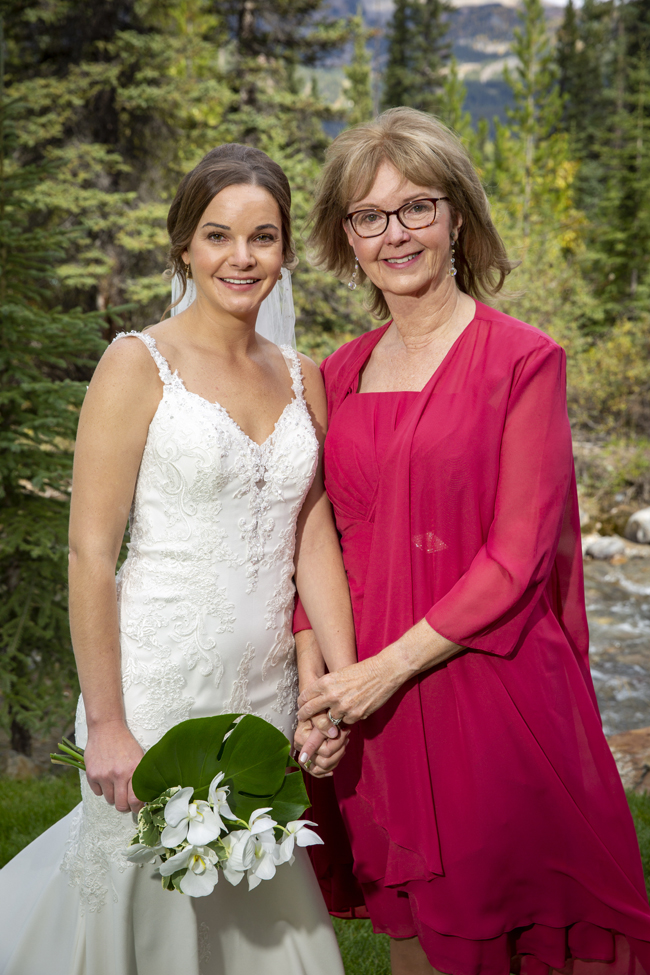 However, I cannot rest on my laurels. Let me tell you about the things I did NOT do. (I prefer to label these things Postponed Resolutions rather than Failed Resolutions.)

I wanted to play the piano more often — but I played only three times in the past year. I did not join the local choir (although it has been suspended now because of covid). I did not take out my sewing machine once. I have an idea for a sequel to Wildwood, but I fear this will never happen. I have set aside these goals for now. 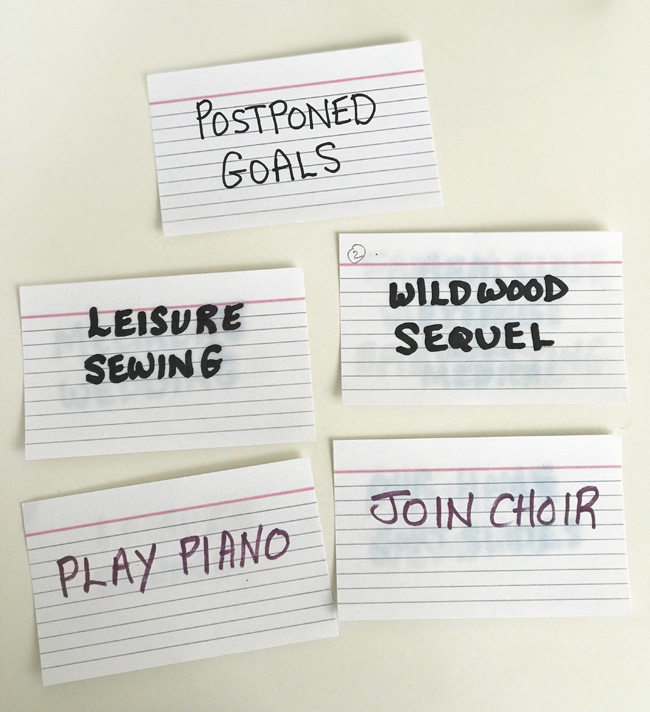 Now, on to 2022 — what will this year bring? My top priorities are family and health, but since these are givens, I didn’t bother writing cards for them this year. Book signings are a thing of the past, so that’s off the table. Travel used to be in my top ten and here’s my list: Top Ten Trips. I didn’t bother with a card this year, because who knows when we can travel freely again?

Instead, I narrowed my goals down to SIX. 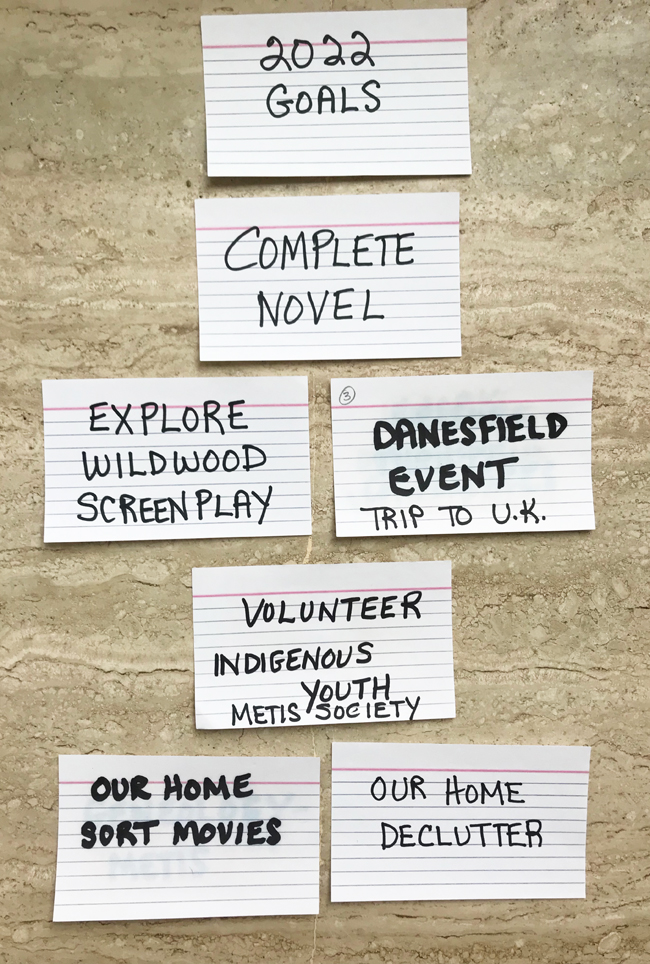 NUMBER ONE on my 2022 resolutions is finishing the novel I started researching back in 2019. Sadly, I completed the first draft of my novel last February and it has been gathering digital dust ever since, languishing in a folder on my computer desktop.

My main character is a young red-haired Scottish woman named Flora who homesteads in Alberta in 1908. To motivate me, I found a photo of how I imagine Flora looks — in reality, this was the American actress Maude Fealy. 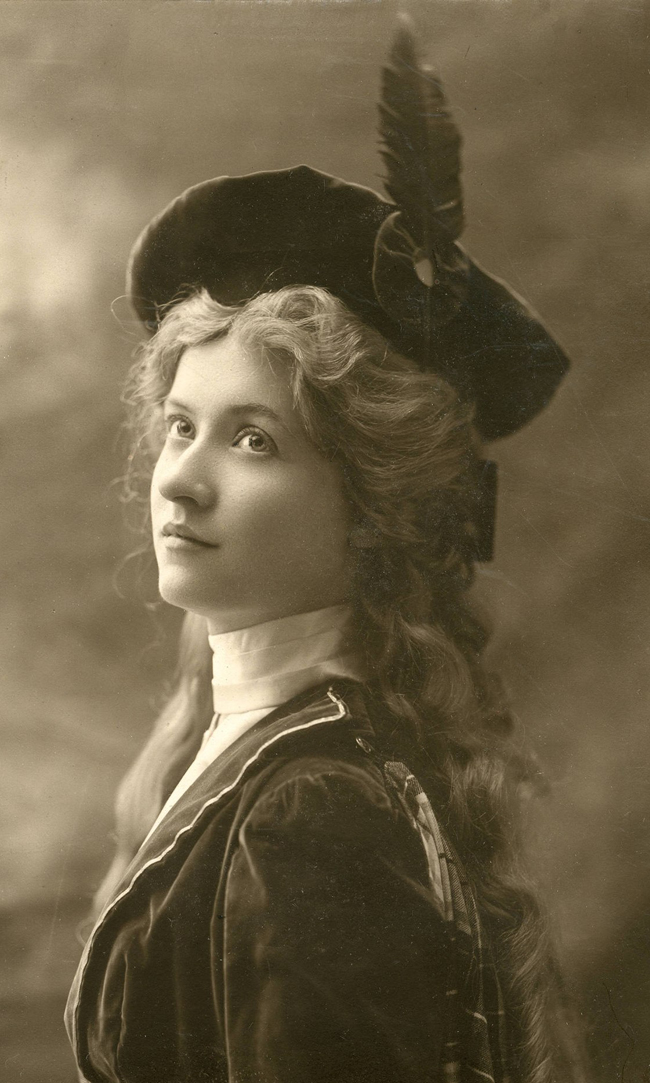 I also want to dream this impossible dream. So many people have told me that Wildwood would make a fantastic movie or miniseries on Netflix or Hallmark, that I will pursue this idea in 2022. (If you have any friends in the movie industry, please let me know).

My other wartime novel Bird’s Eye View would also make a great movie (I picture Emily Blunt in the role of Rose), but I fear it would be too expensive to film because it would require elaborate costumes, vintage aircraft and movie sets in England. Wildwood, on the other hand, would require only an old foursquare farmhouse in the countryside, one that looks like this. 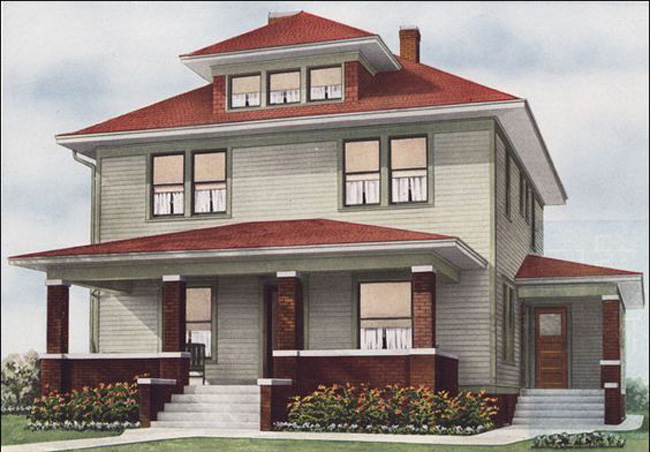 There’s only one trip on the horizon. I have been invited once again to be the guest speaker at an event at Danesfield House Hotel, the former headquarters for aerial photo interpretation and the setting for my novel Bird’s Eye View, now a luxury boutique hotel. At the time of writing, this event is still going ahead and we will be there on May 8, 2022, the anniversary of Victory in Europe (VE-Day). I’m looking forward to sleeping in one of these gorgeous bedrooms! 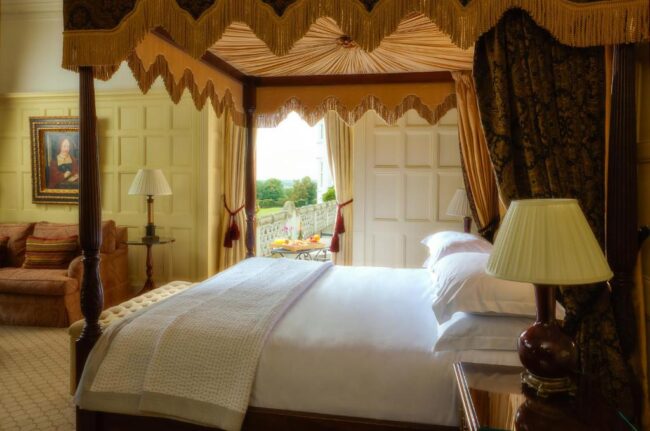 We try to do at least one big home project a year. Decluttering the house and garage (like most people, we have WAY too much stuff) will take up several weeks of our time in 2022. So will sorting hundreds of home movies, and finding a way to preserve them digitally.

Finally, the volunteer activity I have chosen to tackle this year is my involvement in our local Columbia Valley Métis Association. Thanks to a grandmother with indigenous heritage, I am a bona fide Métis with the paperwork to prove it, and have belonged to my local association for two decades. This year I decided to accept a role on the board of directors, and I hope to make my own small contribution toward reconciliation.

Friends, I hope you try out the Clarity Card process and select your top ten goals for 2022. Like me, you can always “postpone” them if things don’t work out.

I’m sending you my very best wishes for a warm winter and an early spring.