A wartime scrapbook kept by Alice Spackman of Okotoks, Alberta, stuffed with letters, photographs and clippings, is the foundation for a new book titled She Made Them Family. It’s a fascinating glimpse of life in a small prairie town during World War Two. 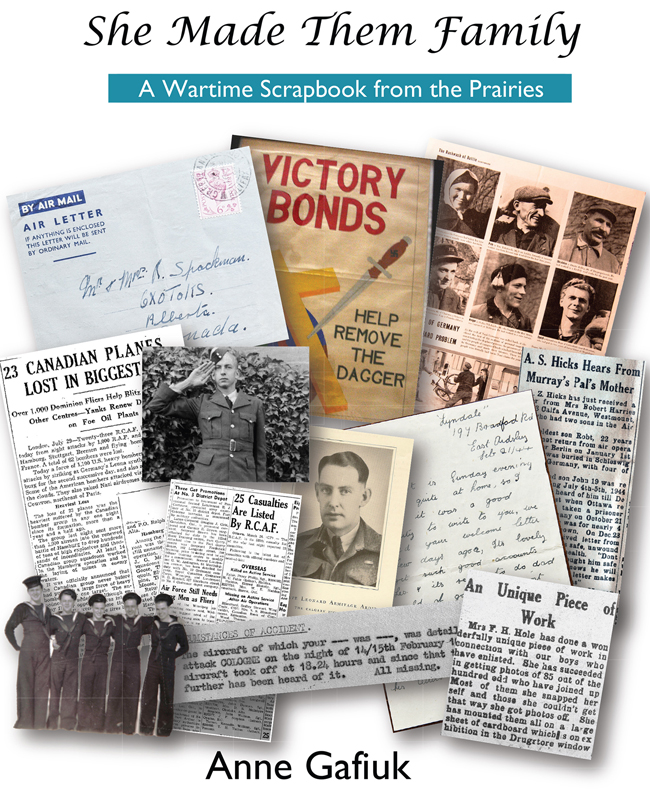 So I was delighted to hear about Anne’s latest book called She Made Them Family: A Wartime Scrapbook From the Prairies. Here Anne describes in her own words what this significant historical project entailed.

In the summer of 2012, a brittle scrapbook with the faint words ‘War Years’ printed on the cover was donated to the Bomber Command Museum of Canada in Nanton, Alberta. 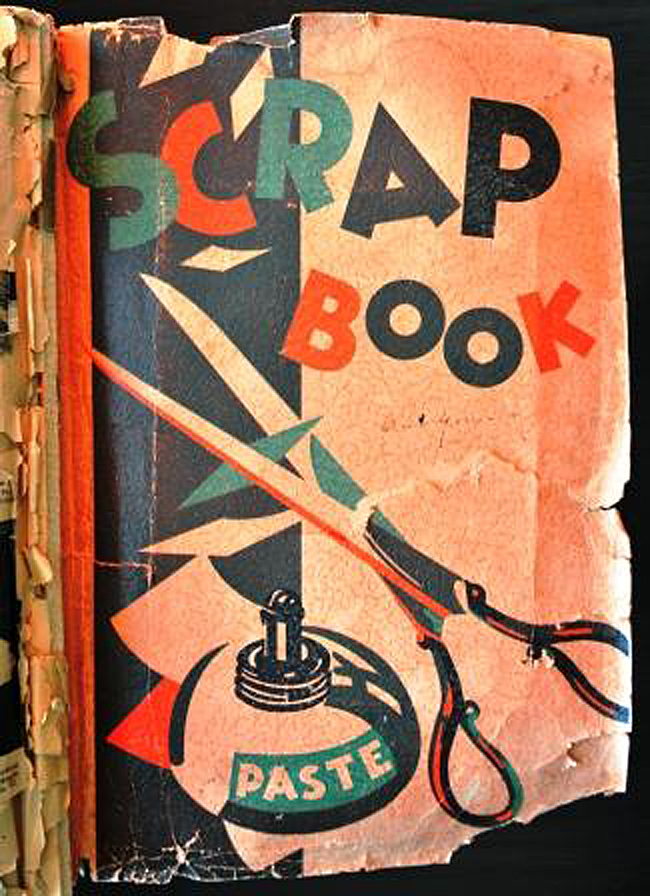 More than seventy years ago, Mrs. Alice Spackman of Okotoks, Alberta created this significant artifact during the Second World War.  Here’s a photograph of that admirable lady. 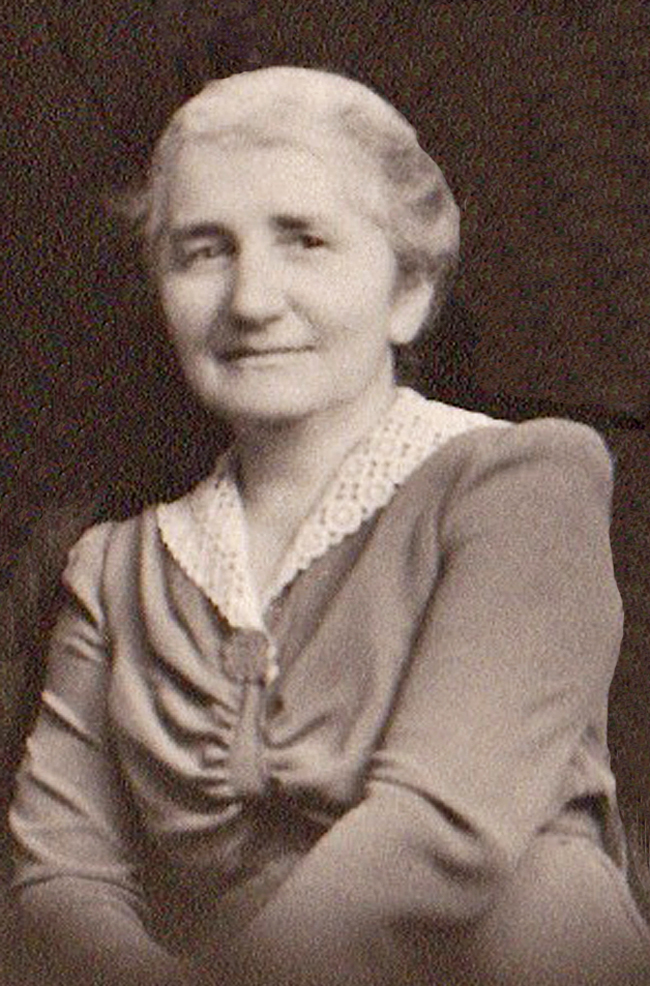 Within its pages are many profiles of men and women who worked and lived in the Alberta communities of Okotoks and De Winton areas, including members of her own family. When war broke out, they answered the call to serve in the Royal Canadian Air Force, the Royal Canadian Navy, the Canadian Army, or worked as civilians to help with the war effort at home. They were educators, shopkeepers, sons and daughters from town and the surrounding farms; one was a young First Nations man from Morley, Alberta.

In a very orderly manner, Mrs. Spackman cut out and then glued photographs, newspaper clippings and magazine articles. She pasted envelopes onto the now fragile newsprint pages, stuffing them with handwritten letters.

Also contained within the pages were those who visited the Spackman family: students of Royal Air Force #31 Elementary Flying Training School, part of the British Commonwealth Air Training Plan, at nearby De Winton. Mrs. Spackman stayed in touch with many of them during their training, and later their postings.

She wrote to their families in the United Kingdom throughout the war and they wrote back to her, the letters showing what life was like in wartime Britain waiting for a son or husband to return.

Other visitors came up from the Royal Air Force #32 Elementary Flight Training School in Bowden, Alberta — plus a few who were just travelling through the area on their way to another posting.

Updates about the men and women, plus additional information relating to the many members of staff — from those who worked in the Mess, to instructors at De Winton — supplement this rare look into how small town Alberta participated in the war effort, mirroring others across Canada.

Never before published stories and photos from personal collections have been added to the original scrapbook collection, courtesy of people who lived in the area at that time, keen to share their tales and pictures.

Here is just a small sample of the many fascinating images collected together between the covers of She Made Them Family.

Alice Spackman and her husband Richard had five children of their own. During the war the door was always open to visitors from near and far at their modest home in Okotoks. 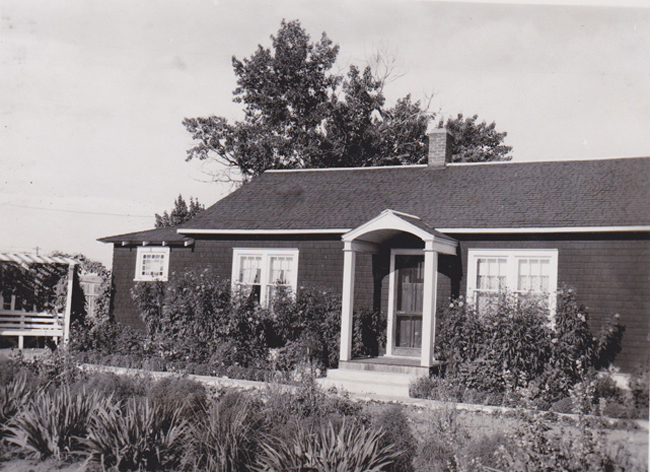 Okotoks was a tiny place with a population of about seven hundred when the war began, but residents welcomed with open arms the influx of air trainees at the surrounding bases. This aerial photo was taken in 1941. 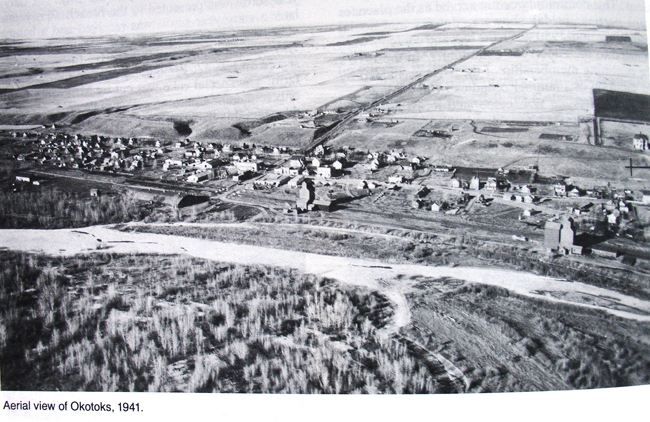 Taken from Alice’s scrapbook, this was the type of card that thousands of airmen sent home to their families back in Britain, Australia and other Commonwealth countries. For many, it was their first Christmas away from home. 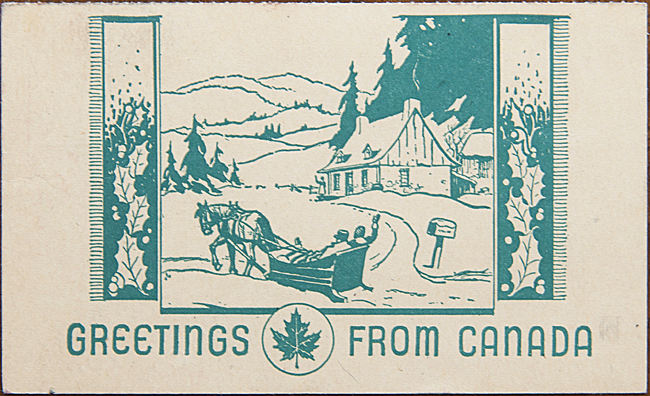 The book contains many photographs of servicemen, including this one of flying instructor Sgt. Pollard, and his young trainee Bob Grecourt, a member of the Free French.

In reply to her many letters overseas, Alice Spackman received responses like this one from E. R. Manley, a schoolmaster in England, thanking her “for the kindness you are showing him and to all the numerous families in Canada and overseas generally who have been so hospitable toward the boys who have passed through my hands.” 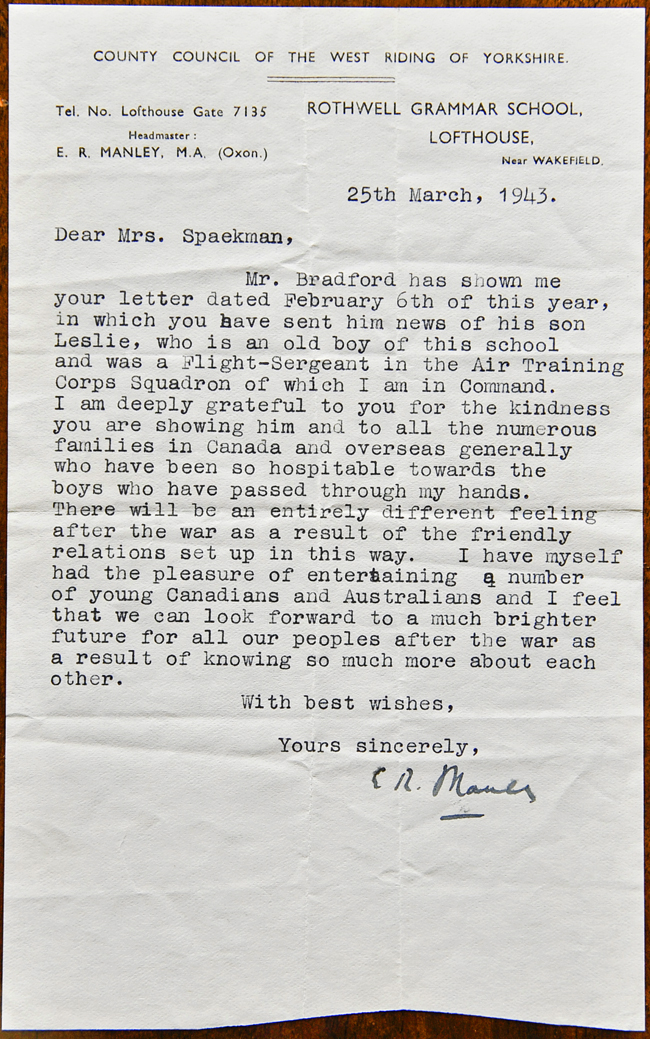 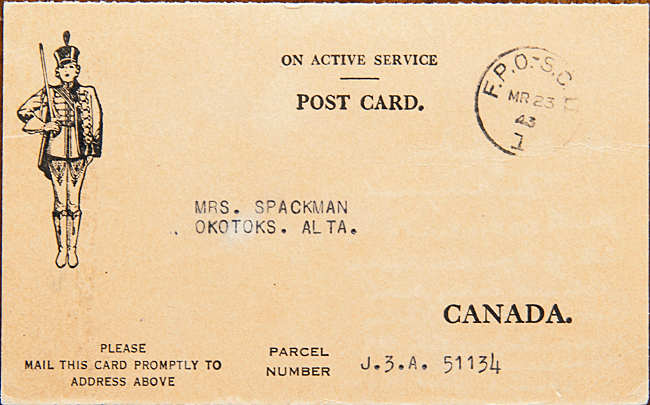 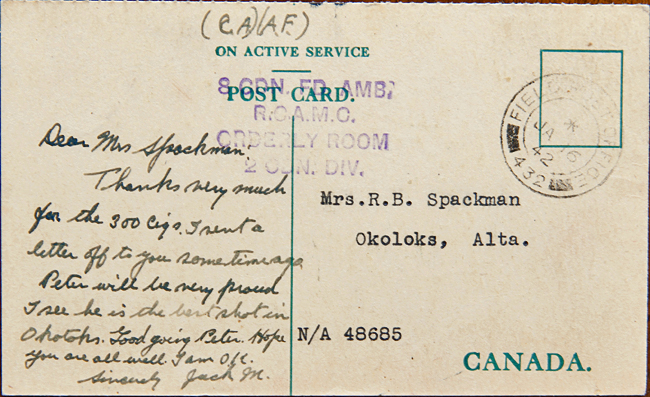 Mrs. Spackman kept not only personal notes and photographs, but many newspaper clippings indicating the progress of the war. This one was clipped from the Star Weekly, a weekly photo magazine published by the Toronto Star, while the Canadian Army was progressing up the boot of Italy. Several Okotoks boys were among them. 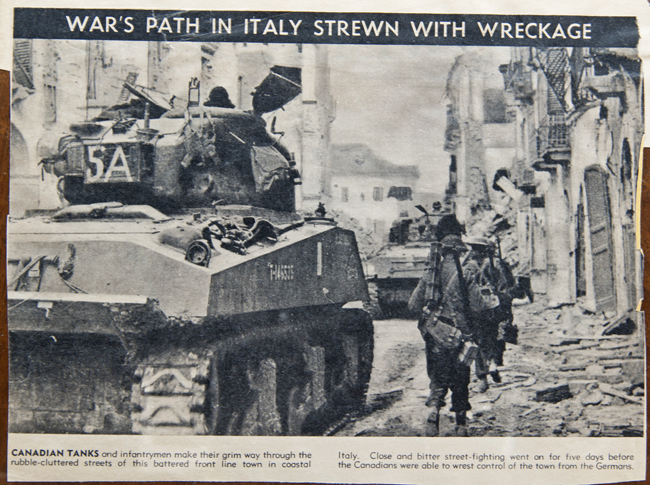 Some of the clippings had a more personal connection, like this one about Rifleman Joe Poucette of the Morley Reserve, who was killed in action while serving in France, “the first Stony Indian to give his life in the present war.” The headline is very sad. 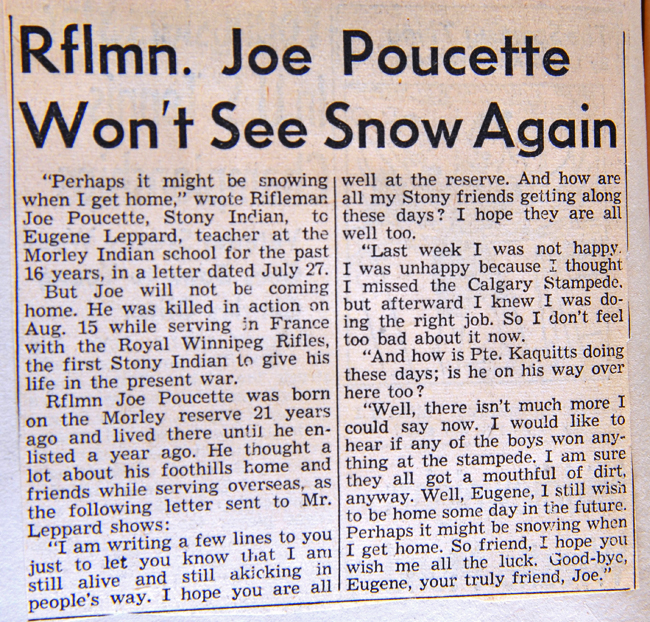 She Made Them Family includes other clippings as well, like this one about an airman who was lucky, at least so far, named Ralph Bullivant of Okotoks, tail gunner in a Stirling bomber, from the Gibbard Family Collection. 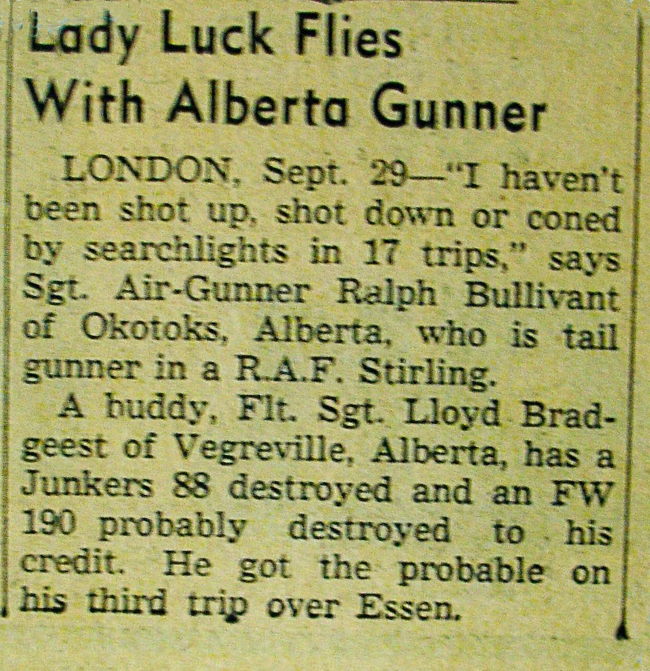 There were even political cartoons which must have resonated with Mrs. Spackman and that is why they were so carefully preserved. This one portrays the inexorable march towards victory. 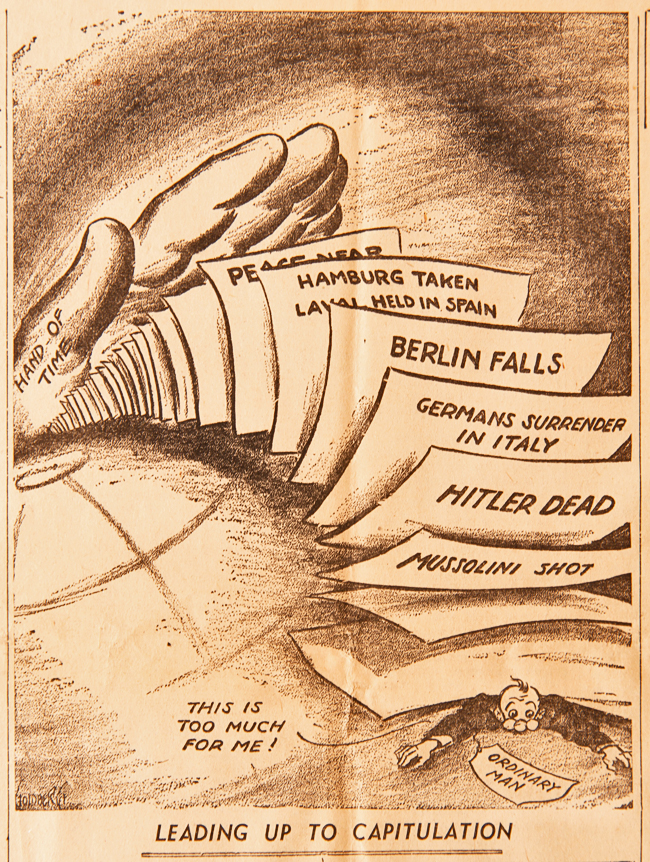 The book contains clippings like this one commemorating a “Wings Parade” at RAF Claresholm in which young Campbell Gibbard of Okotoks proudly received his pilot’s wings. In his speech to the graduates, Air Commodore G. R. Howsam said: “It is the wings of the air force which will strike and destroy every crooked cross of Hitler and every Jap-Yahoo wherever they may be.” This photo is courtesy of the Gibbard Family Collection. 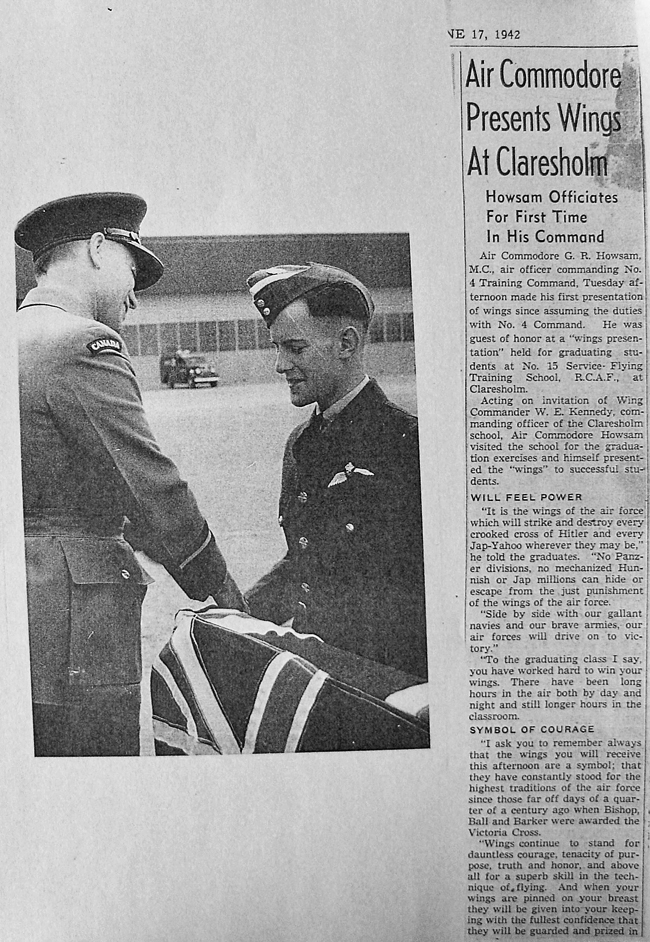 Not all the men who enjoyed Mrs. Spackman’s warm hospitality were air crew. This photo is of Harry Denning from south of Turner Valley, who served in the Royal Canadian Navy as a gunner on Fairmile Q87, an escort ship used in the St. Lawrence River and the Gulf of St. Lawrence, as well as escorting convoys between Newfoundland and the mainland of Canada. 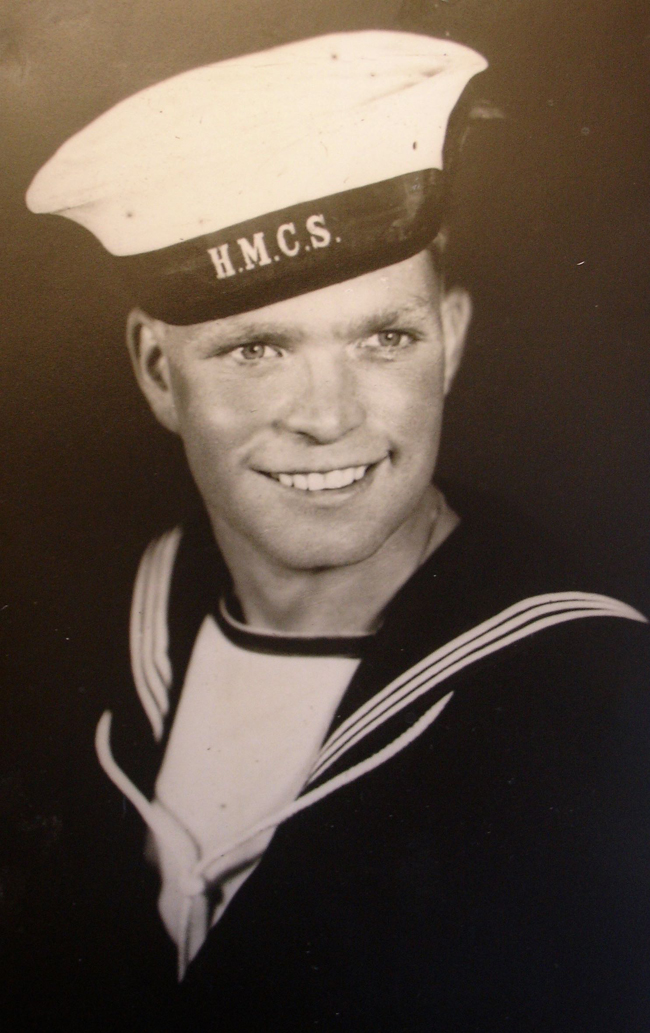 This hand-drawn poster for Victory Bonds, created by Harry Denning himself while he was in high school, won third prize in the Canada-wide poster contest. 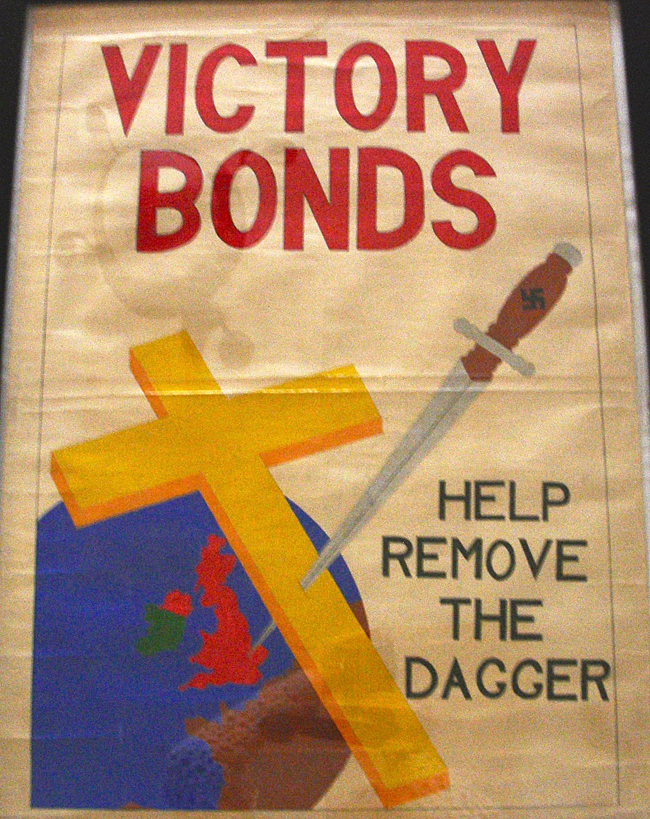 Imagine Mrs. Spackman’s joy when she carefully clipped this photograph from The Calgary Herald and glued it into her scrapbook! Alberta, like the rest of the world, celebrated the successful invasion of Europe with great fanfare. 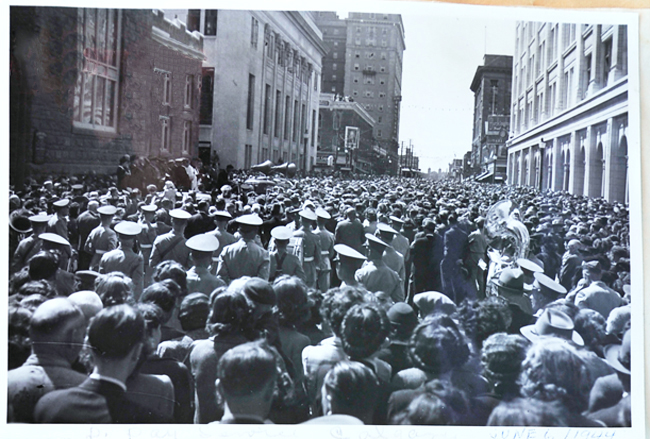 Finally, this photograph isn’t found in She Made Them Family, but it is a photograph of the hard-working Anne Gafiuk poring over old copies of the Okotoks Review in her quest for more wartime information.

Thanks for sharing these great example, Anne, and I’m sure many of us look forward to reading She Made Them Family. 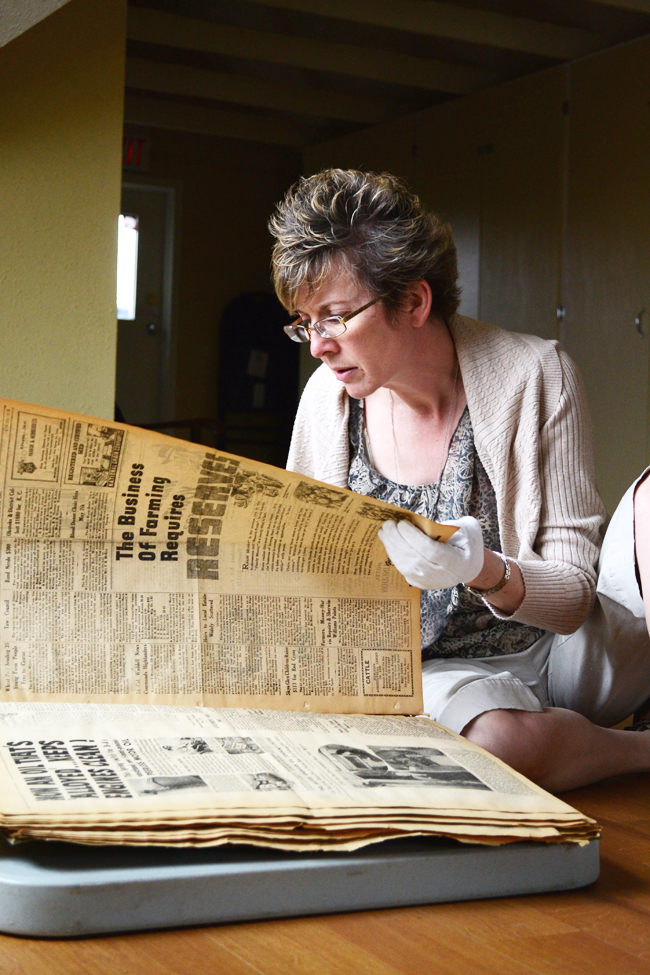 This 358-page book has photos, letters and documents on almost every page. You may order the book by emailing Anne at: anne@whatsinastory.ca, and visiting her website at www.whatsinastory.ca. You may also buy a copy from the Bomber Command Museum in Nanton, Alberta. For more information about this and other great wartime books visit the Bomber Command Museum website here: She Made Them Family.

The Star Weekly was a Canadian newsmagazine published by the Toronto Star. During the Second World War, a colour illustration with a wartime theme appeared on the cover each week. Here’s an image showing a very motherly woman who reminds me of Mrs. Spackman serving a servicewoman and a serviceman at Thanksgiving. To see my entire collection of Star Weekly covers, click: Star Weekly At War.

I hope all Wartime Wednesday readers will have a very happy Thanksgiving! 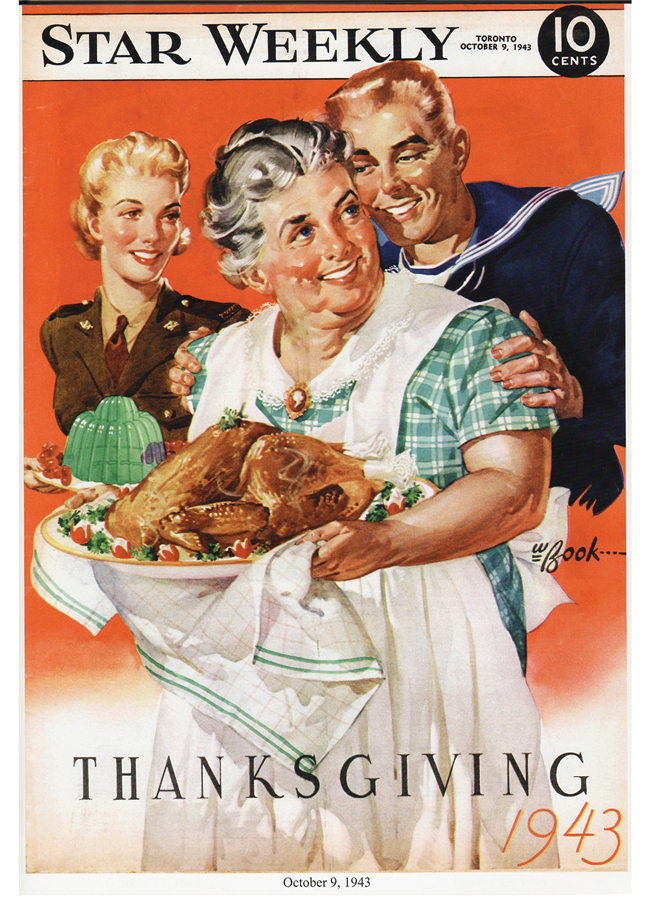