For your summertime reading enjoyment, here’s a collection of five wartime tales that are stranger than fiction – starting with this delightful picture of Samantha Kot, who re-enacted an old photo she discovered right here on Wartime Wednesdays! 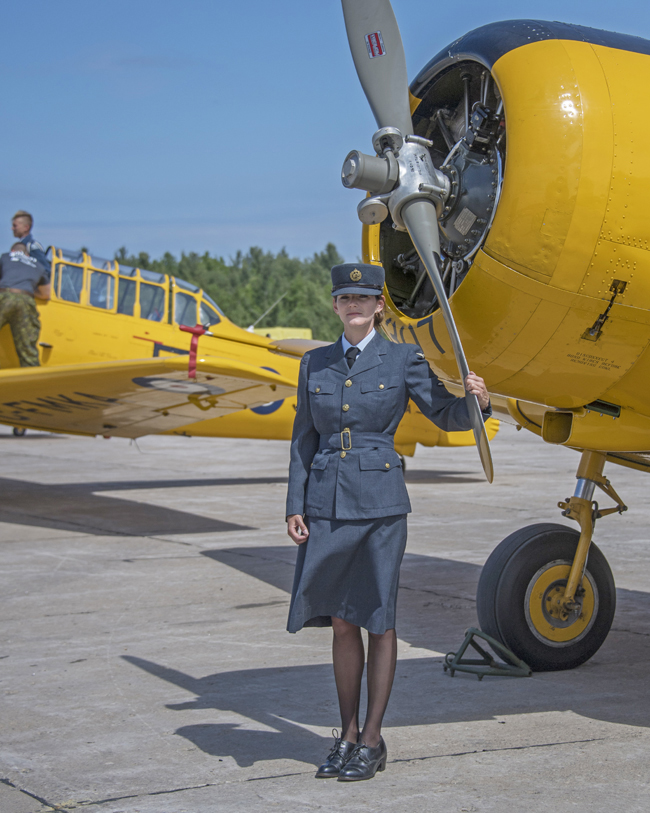 Samantha Kot of Orangeville, Ontario comes from an aviation-mad family that restores old aircraft and takes them on the air show circuit.  Her father is a pilot and her mother is a former flight attendant. According to Samantha, whom I spoke with on the telephone: “I grew up with four Harvards in my back yard.”

Samantha herself, a 33-year-old flight attendant with Air Transat, was combing the internet one day for information about women’s wartime uniforms when she stumbled across my collection of photographs of airwomen performing different tasks, in a blog post titled: What Did You Do in the RCAF, Grandma?

In one of the photos was a 1939 Stinson 105, which was used to transport VIPs in the Royal Canadian Air Force, and that’s an aircraft that the Kot family just happens to own!

So Samantha donned her vintage wartime Royal Canadian Air Force Uniform, and with the help of her father Murray Kot, and her boyfriend Marco Rusconi (also a pilot with the Canadian Harvard Aerobatic Team), they recreated the old photograph at a recent air show at the Canadian Forces Base in Borden, Ontario.

The new photo was taken by Eric Dumegan, their friend and aviation photo journalist. You can see more examples of his work by clicking here: Eric Dumegan.

Compare this new black and white photograph with the original version below. You will note that the authenticity extends to using the exact same chock to hold the wheel steady. They even included two guys climbing into the cockpit of an aircraft in the background. These aviation buffs are sticklers for detail! 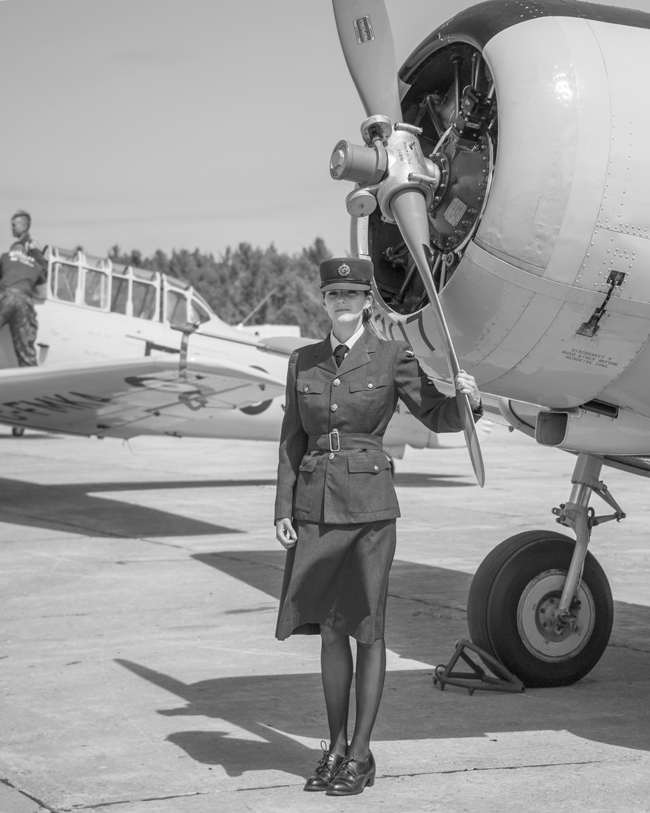 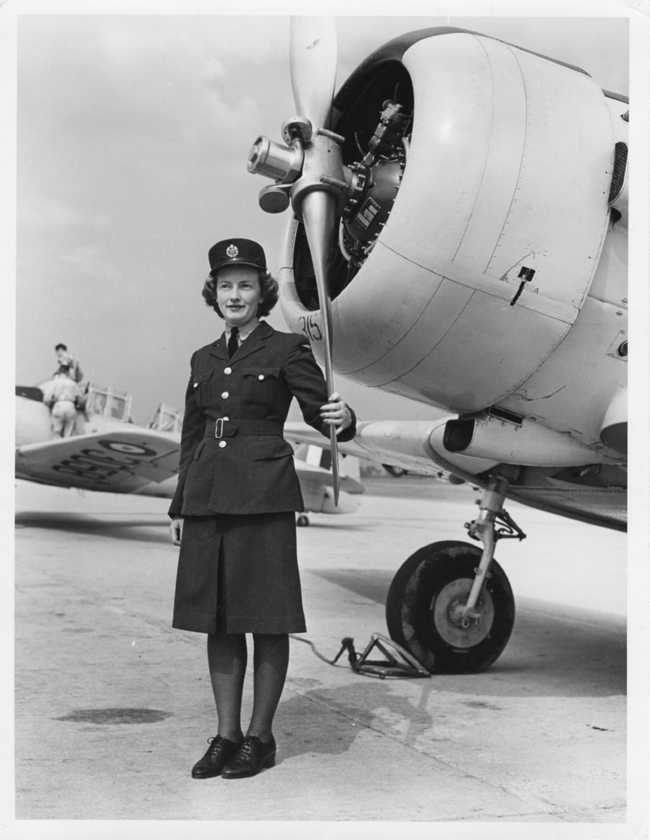 What Samantha would really like to know is the identity of the woman in the original photo. It was taken for publicity purposes by the Department of National Defence, and my copy has no info on the back, but bears the identity number PL-20449.

Samantha will check it out with Library and Archives Canada to see if the woman is identified, but this is doubtful because of wartime security reasons.

So, my friends, does anyone recognize this woman, or have any information about when or where this photograph was taken?

Who WERE Those Girls in the Fountain?

This iconic photograph of two British girls and two sailors in the Trafalgar Square fountain has been used around the world to highlight the celebrations on VE Day, or Victory in Europe Day.

But it wasn’t until decades later that a newspaper tracked down the identities of the two women, and found that Cynthia Covello and Joyce Digney were lifelong friends who wound up living in my home province, British Columbia! 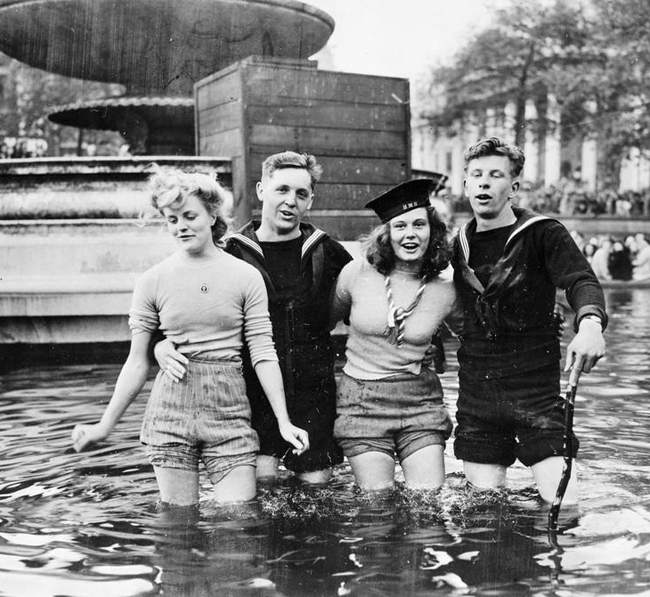 Joyce, 18, and Cynthia, 20, first met in the Women’s Land Army in 1944. They worked together on various farms around Surrey, just outside London.

When Germany surrendered on May 7, 1945, the following day was declared a public holiday. The two women took the early train into London. Their first stop was St. Paul’s Cathedral, where they prayed for family members they had lost during the war.

Then they headed into the crowded streets, which were filled with cheering celebrants. In Trafalgar Square, revellers climbed on Nelson’s Column and the four lion statues. It was a hot day, and people were wading in the fountains, so Joyce and Cynthia rolled up their trousers and stepped in.

Joyce explained: “Two sailors came into the fountain to join us. One of them climbed up one of the fountains and dived into the two feet of water. How he didn’t kill himself, I don’t know! He put his arms around me and fell back, taking me under the water with him.

“I grabbed the chap by the shirt and dunked him up and down, screaming: ‘Look what you’ve done to me! How am I going to get home?’” After the dunking, the two women fortunately found a bonfire and dried off before taking the train back to Surrey.

Shortly after the war, the two women married Canadian soldiers. Both Joyce and her husband Ernest, and Cynthia and her husband Oscar, settled in B.C. To this day, their families remain close!

When I first heard about this, I was doubtful that it really happened – but crazy as it sounds, this story is absolutely true.

The USS O’Bannon faced off against Japan in World War Two and earned more battle stars than any other American destroyer. It also participated in one of the oddest incidents of the war. 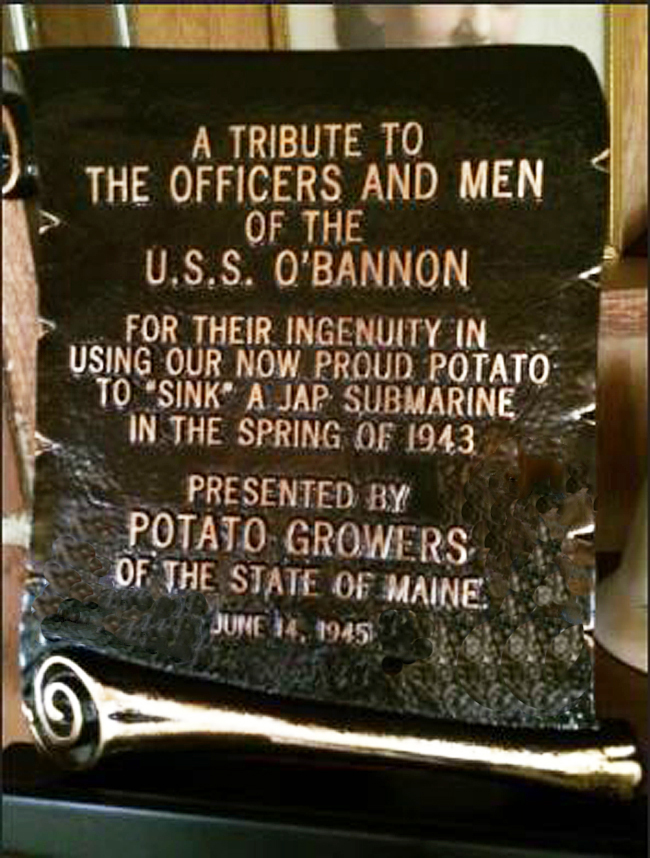 On April 5, 1943, the destroyer came across a large Japanese submarine, cruising on the surface, oblivious to the approaching ship (someone was obviously neglecting their lookout duty).

The O’Bannon decided to ram the sub. At the last minute, however, officers decided against it — just in case the sub was a minelayer. If rammed, it could blow up the destroyer as well.

Because of this quick withdrawal, the O’Bannon found itself moving directly parallel to the sub. The Americans could see the Japanese sailors asleep on the deck. When the Japanese awoke, they found themselves staring straight at the enemy.

However, the O’Bannon was too close to the submarine to lower its guns, while the submarine’s deck guns were ready to fire. The situation was critical. Desperately, the O’Bannon crew began to use whatever they had at their disposal. Reaching inside nearby storage bins, the American sailors began to pelt the Japanese with potatoes!

The Japanese were so confused by this ploy that they believed the potatoes were hand grenades! They were so busy throwing these potato “grenades” overboard, that they didn’t fire their deck guns.

The O’Bannon was able to move far enough away to begin firing at the sub, which had begun to descend. After the submarine was submerged, the O’Bannon dropped a depth charge that destroyed it.

Since the potatoes were from Maine, the Association of Potato Growers of Maine sent a plaque commemorating the event that hung in the crew’s mess!

The Maine Potato Episode went down in history.

The vast majority of Canadians were intensely committed to the war effort. However, one little-known incident that took place right here in British Columbia was an armed mutiny! 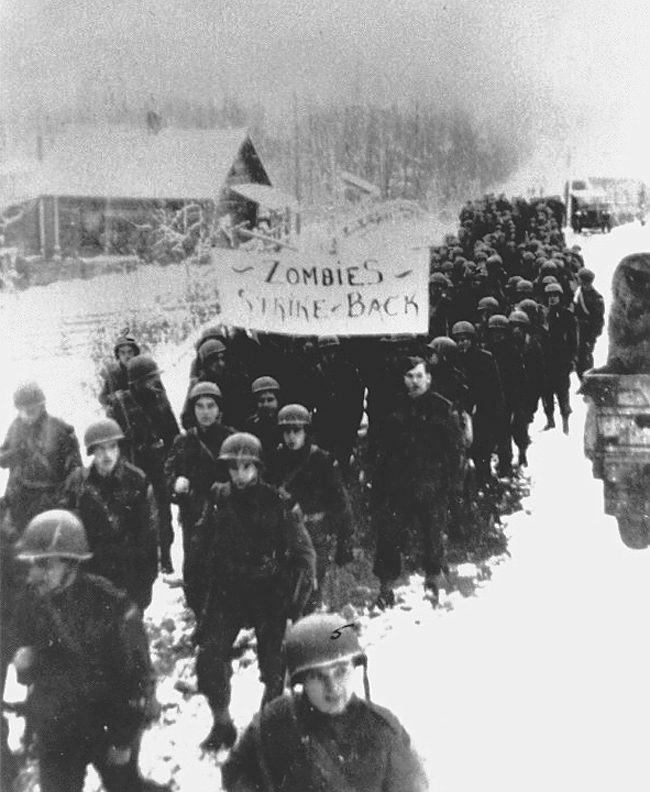 On November 25, 1944, several hundred soldiers stationed in the town of Terrace refused regular duty and paraded down main street carrying banners that read “DOWN WITH CONSCRIPTION” and “ZOMBIES STRIKE BACK.”

Les Fusiliers du St. Laurent, a mainly French Canadian battalion from Quebec that was stationed in Terrace, “came charging down the hill, whooping and shouting like a swarm of angry wasps,” remembers one eyewitness.

They were reacting to news that the government was going to send Home Defence soldiers to Europe, after they had been promised they would never leave Canada.

When the war began in 1939, there was no Canadian conscription. But as the situation in Europe became critical, a reluctant Prime Minister Mackenzie King implemented compulsory service in 1942. However, he promised that conscripted men would serve only at home, defending Canada.

The Home Defence soldiers were sent mainly to the West Coast, to defend against a Japanese invasion. The small northern town of Terrace was not a comfortable posting for three battalions consisting of 3,000 Home Defence soldiers. Without enough heating fuel or fresh food, the men were cold and miserable.

In November 1944, when the news of the overseas deployment broke on the radio, many of them felt betrayed. They were angry after months of fruitless training in an isolated community for the defence of a nearby coastline that they didn’t believe was in danger.

Townspeople gathered along the streets to watch the parade. Some of them, especially those with family members in the military, were furious: they saw the men as shirking their duty. They sneeringly referred to the conscripted men as “Zombies.”

Two days later, the situation was officially declared a mutiny – and that’s when the protest petered out. Most of the mutineers simply gave up without having won any concessions.

Within a week all three battalions were shipped out of Terrace. Although charges were laid, only a few men were sentenced. For the most part, the government was happy to let the whole affair fade away. And that’s why you have probably never heard of it!

In the dying weeks of the war, Canadian troops were still pressing into the Netherlands — wet, cold and under fire.

Léo Major of Quebec’s Régiment de la Chaudière had already lost an eye, but he refused to be sent home. You only need one eye to shoot a rifle, he argued. (The photo of this handsome soldier was taken before the terrible wound that cost him an eye). 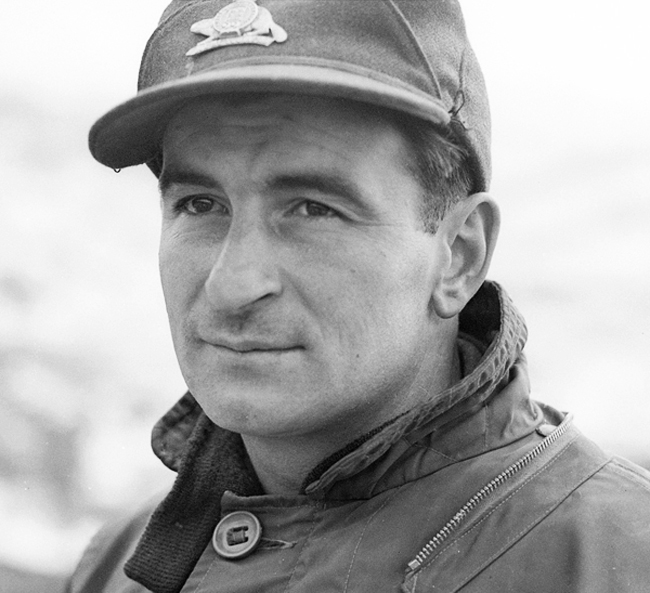 Major would go on to become the only Canadian ever to receive a Distinguished Conduct Medal in two separate wars, the second earned in Korea.

But he is perhaps best known as the single-handed liberator of the town of Zwolle in Holland.

Major and another soldier, Cpl. Willie Arsenault, stealthily entered the German-held town on a reconnaissance mission after dark on April 13, 1945.

At nine o’clock the next morning, Major returned to his camp and announced that Arsenault was dead, but the town had been liberated!

After Arsenault was killed, the man who became known as the one-eyed Canadian Rambo took out the Germans who’d shot his companion, grabbed a bag of grenades, and set off alone on a one-man mission.

Major found a German officer and convinced him to surrender. He told the officer that the town was surrounded, but he’d allow the Germans to escape if they evacuated their troops immediately. Then he handed the officer back his gun and let him go.

Knowing he had to make it seem like the Canadians really were poised to attack, Major ran through the streets, firing a machine gun and tossing grenades.

He single-handedly captured more than 50 Germans and delivered them in groups to nearby Canadian troops before melting back into the darkness. Then — as the pièce de résistance — he lit the Gestapo headquarters on fire!

By morning, the terrified Germans had deserted the town.

The people of Zwolle remember the Canadian as a hero who saved them from an armed battle that may have resulted in many civilian deaths, naming a street after him. The mayor of Zwolle, Henk Jan Meijer, says simply: “He is a symbol of our freedom.”

We need to hear more about our Canadian heroes!

The Star Weekly was a Canadian newsmagazine published by the Toronto Star. This cover appeared in 1939 a few months before the war began. I love this illustration of the London Violet Seller handing flowers to the two Canadians, in the midst of all the bomb wreckage. To see my collection of Star Weekly covers: Star Weekly At War. 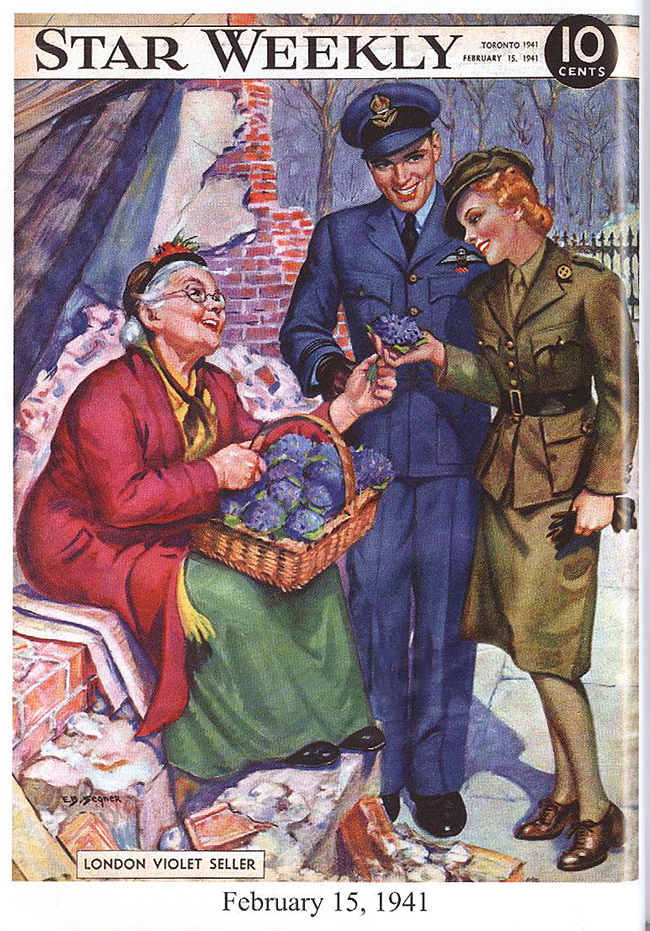