The royal family and I go back a long way, since I’ve been fascinated with them since my earliest memory. Here’s a personal history of my lifelong association with this unique clan. Ever since I can remember, I have listened to the queen deliver her message to the Commonwealth on Christmas morning — first on the kitchen radio in my childhood farmhouse outside North Battleford, Saskatchewan; then for several decades on television; and now (if I miss the televised version) on the internet. Here’s a photo of Her Majesty delivering her 2020 Christmas message — for the sixty-ninth year in a row! 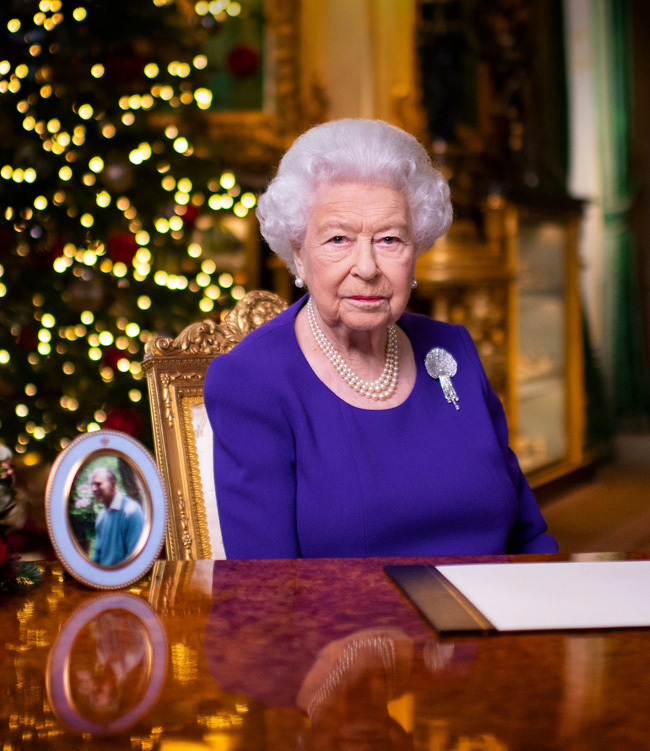 I Kept a Royal Scrapbook

Alas, this scrapbook no longer exists. But I vividly recall cutting out magazine photos of royal family members and pasting them into my scrapbook. I had a wealth of pictures to choose from. My grandmother had been very kind to a young British airman who visited her home regularly during his training at the North Battleford airport, part of the British Commonwealth Air Training Program. Happily, he survived the war and sent her a perennial subscription to Woman’s Own, a popular British magazine that carried many royal photos. I was especially fond of Anne, the golden-haired princess who is just nine months older than I am. 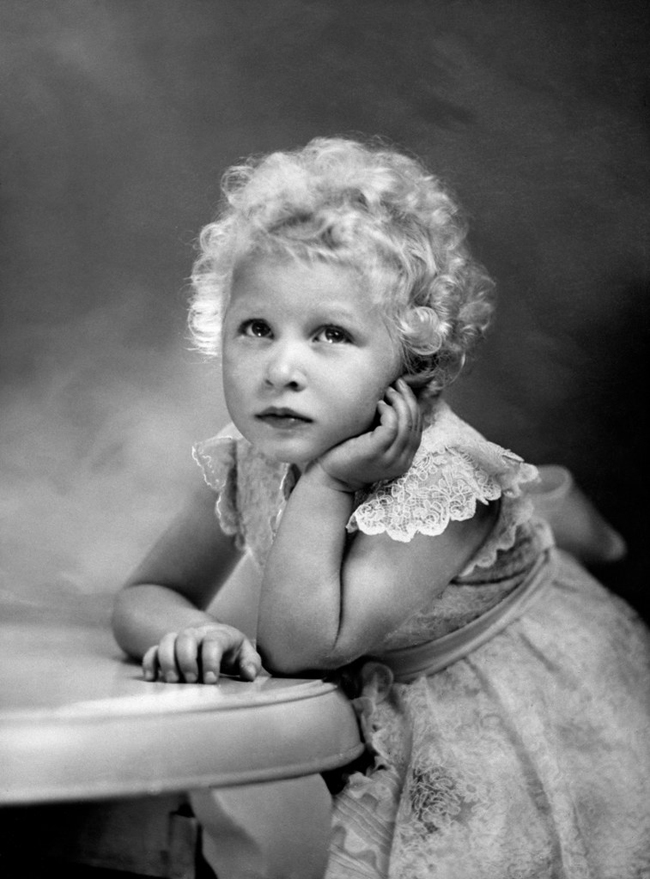 This was the first televised royal wedding, and I watched it! I was only nine years old in May 1960 when Margaret married Anthony Armstrong-Jones. My cousins and I went to the farmhouse belonging to neighbour Lucy Francis, who had arrived in 1907 from England and homesteaded with her husband John near Prongua, Saskatchewan. Mrs. Francis was an ardent Anglophile who owned one of the first televisions, a tiny black and white affair. (I’ll admit that I don’t remember much except a lot of blurry images and cheering crowds). Their marriage ended in divorce. 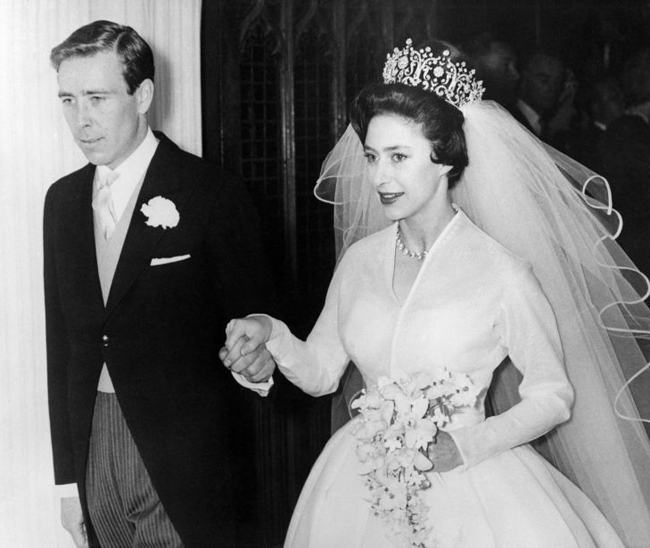 I saw the Queen Trooping the Colour

My girlfriend and I were hitchhiking around the United Kingdom when the annual Trooping the Colour took place in London in June 1972 to mark the official birthday of the queen. We joined throngs of people lining the streets as she rode past on her prancing black horse, looking every inch the royal ruler, along with hundreds of soldiers on horseback and marching bands. For a farm girl from Saskatchewan, it was a thrilling sight! 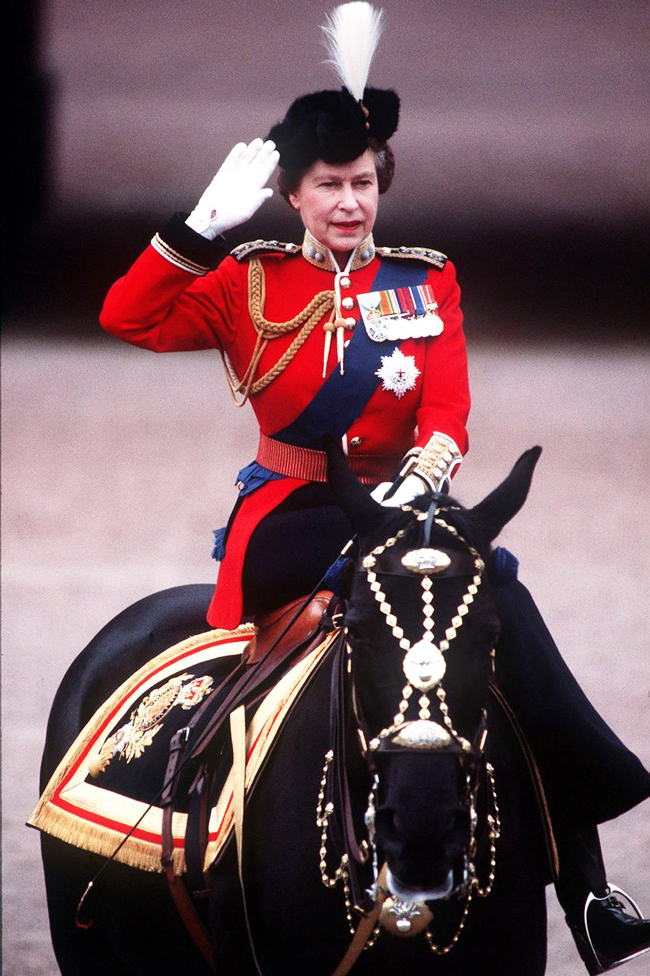 In July 1977 I was working as a farm reporter for the Western Producer newspaper in Saskatoon, Saskatchewan when Charles and his younger brother Andrew visited Alberta. Since my newspaper was the largest weekly in Canada at the time, the paper was offered a seat on the press bus and I jumped at the chance!

For five days, I rode around with the British paparazzi and reporters from Canada’s major media outlets, feeling very grand indeed.

Three memories remain from that time:

I was ashamed to be considered one of them. They would stop at nothing to get a good photo and send it back to England before their contemporaries. I can’t imagine how members of the royal family feel when the press pack descends like vultures. That’s why I can sympathize with Meghan Markle’s shabby treatment by the British tabloids. They really are bottom feeders.

2. I had to write about egg marketing!

My editor wasn’t so enamoured of the royal family that he wanted to lose a reporter for five days, so I was also assigned to cover the meeting of the International Egg Producers in Calgary. On the second day, I nervously approached the royal media coordinator and explained why I would not be on the bus. He thought this was the most hilarious thing he had ever heard. Reporters around the world were clamouring for a seat on the bus, and I was giving it up for eggs! For the rest of the tour he would call out: “How are the egg producers today?” and then laugh his head off. Everyone else found it a great joke, too.

3. I missed my chance with Charles!

During the tour, the media were invited to a reception where we were presented to the prince. For some reason I thought I was supposed to wear a hat! So I donned my cheap flowered cotton dress and a straw sunhat and lined up with everyone else before I realized my mistake. When Charles reached me, he smiled very nicely and said: “I notice you are the only one here wearing a hat.” And, dear readers, I froze! I was going to tell him that I thought it was a mark of respect, but then I thought that sounded silly, and by the time I found my tongue he had politely passed on to the next person. And there went my chance to become queen!

I still have a copy of my invitation, and my press pass. 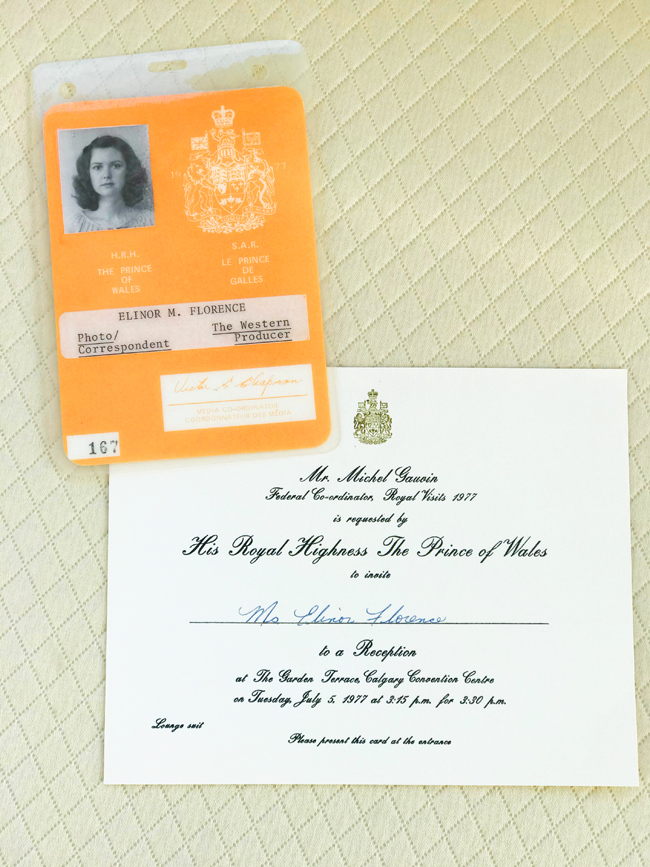 And here’s a full page of photographs I took on the tour. The purpose of the prince’s visit was to commemorate the one hundredth anniversary of the signing of Treaty Number 7 at Blackfoot Crossing. You can see that Prime Minister John Diefenbaker was there, and there’s a glimpse of Alberta Premier Peter Lougheed in one photo. The royal brothers also attended the Calgary Stampede. 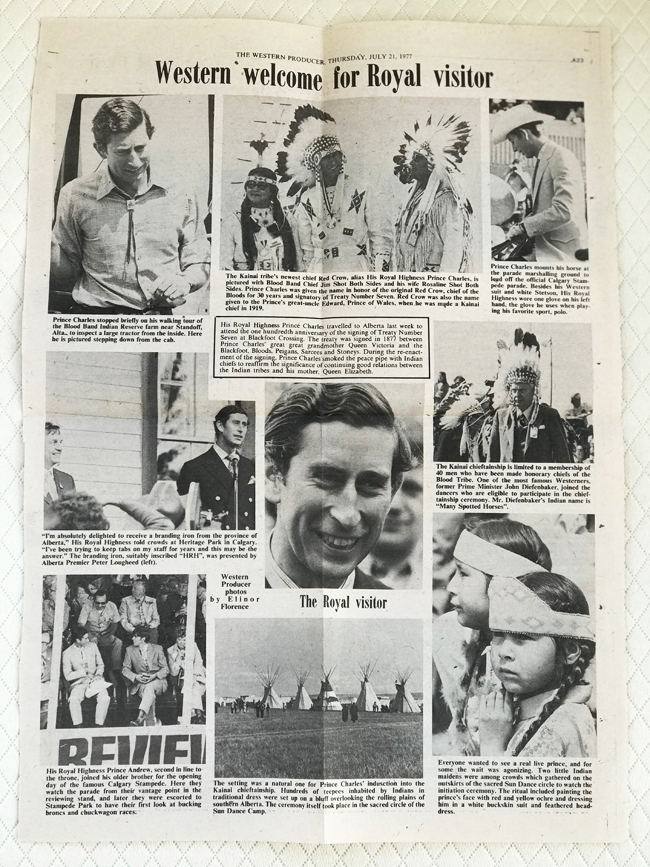 I Lunched With Princess Margaret

Princess Margaret arrived by helicopter in Red Deer, Alberta in July 1980 to present the first Princess Margaret Scholarship in the Arts. Afterward, she was the guest of honour at a fancy hotel luncheon, to which I was invited as a reporter for the daily newspaper, the Red Deer Advocate.

What I remember was that Margaret looked bored and unhappy. When the white-coated servers presented us with a delicious dessert, she took one bite and pushed her plate away and lit a cigarette — while seated at the head table, while everyone else was still eating. Of course, this was back in the day when people smoked any place, any time — but still. Margaret was a heavy smoker all her life. 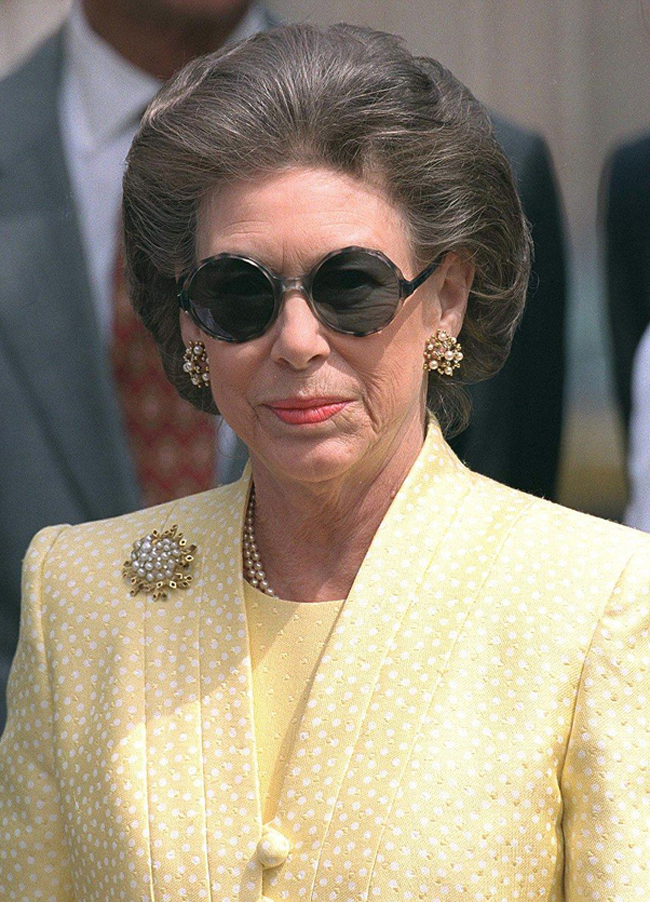 Exactly one year later was the televised royal wedding of Charles and Diana in July 1981. I rose at 4 a.m. and donned my best hat and made tea for the occasion. I was pregnant with my daughter Katie at the time, and the world seemed full of promise. Little did we know on that magical occasion what was in store for this ill-suited couple! (However, no marriage can be considered a mistake if it results in much-loved children.) 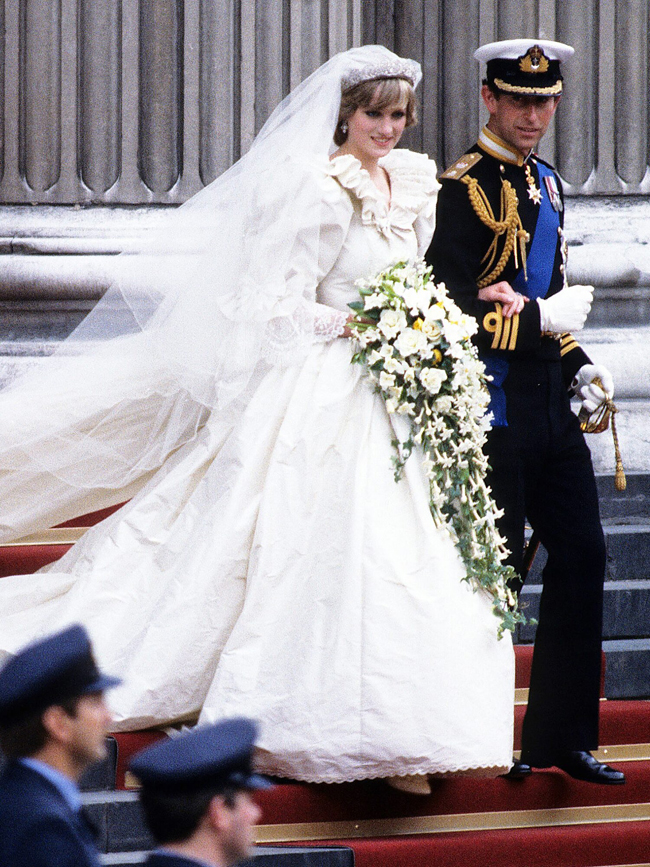 Five years later, in July 1986, I rose early again to watch another royal wedding when Prince Andrew, the younger brother of Charles, married a red-haired beauty. They seemed to be deeply in love — yet this marriage, too, ended in divorce. 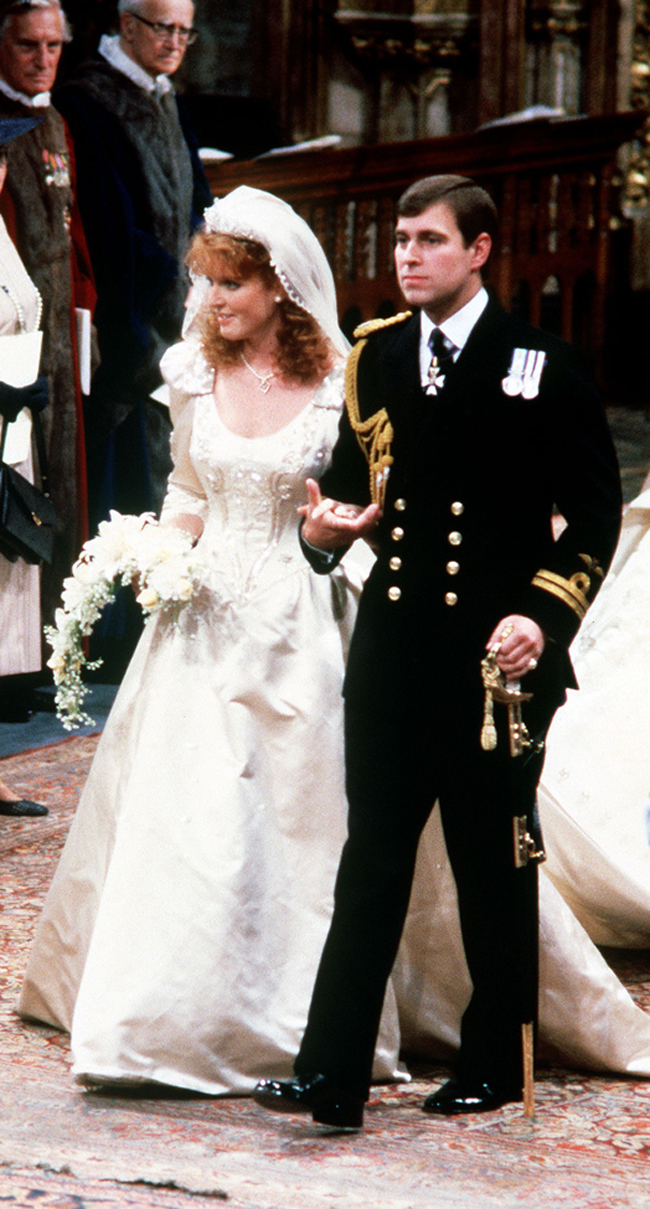 Later that same day, we hosted a Royal Wedding Garden Party! My daughter Katie, aged four, and I wore matching dresses that I sewed myself! 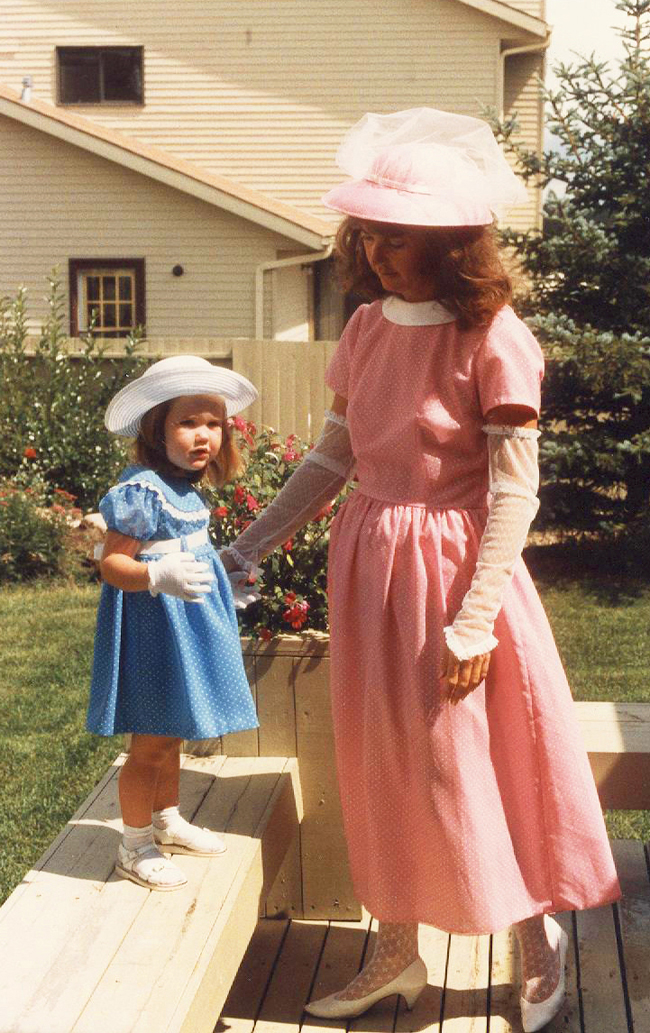 Katie was so thrilled about wearing her white “gubs,” as she called her gloves. 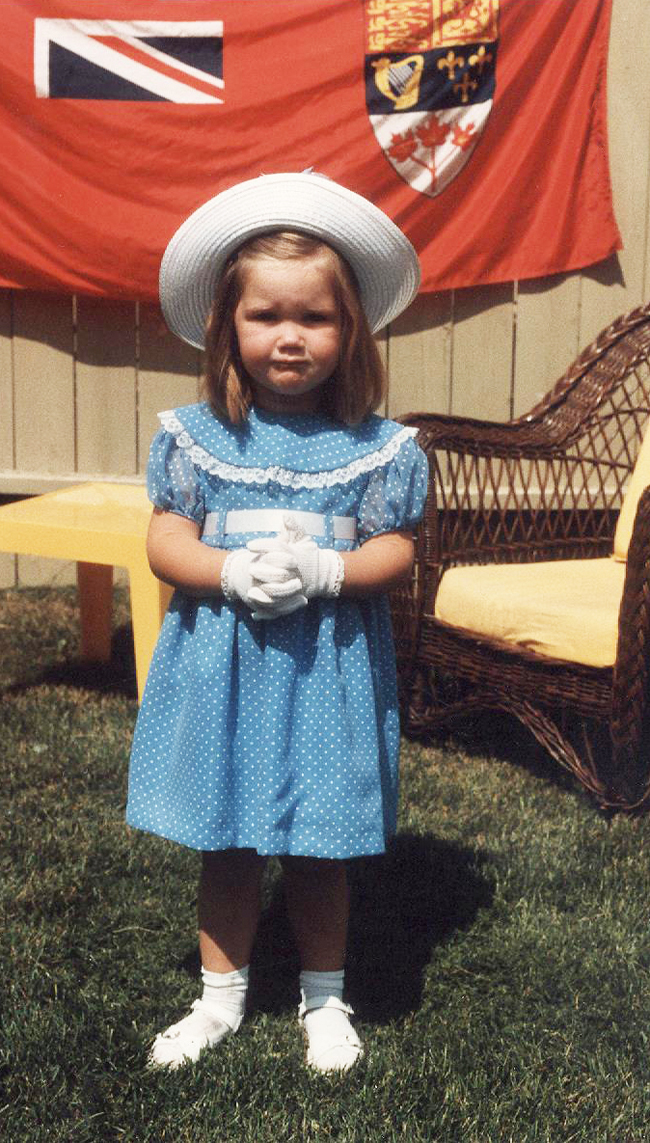 And she was pretty interested in the Union Jack cake — which took FOREVER to ice (and it’s still missing one white bar!) 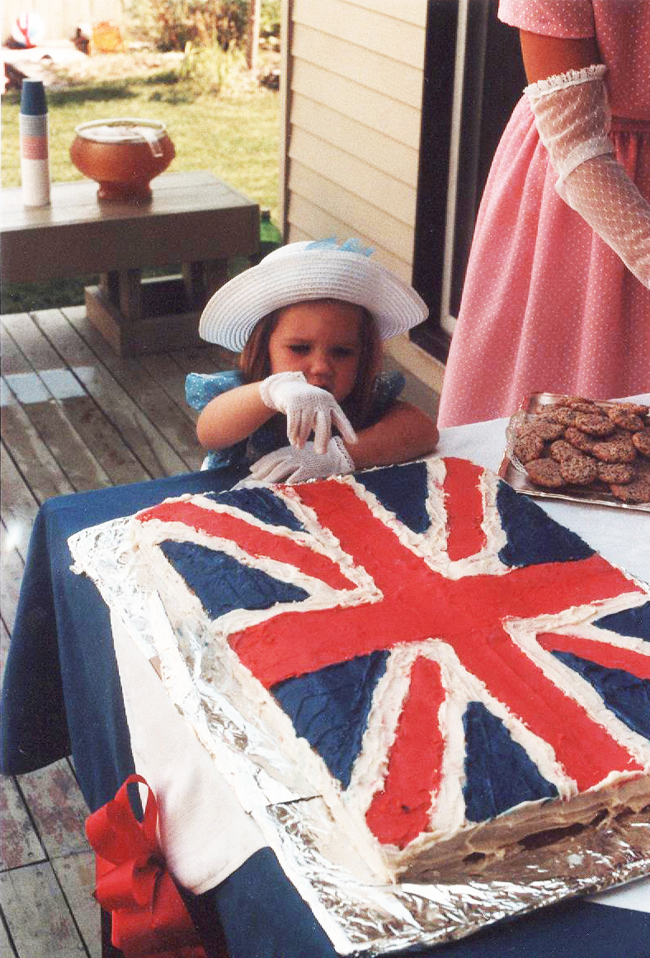 Along with the cake, we served beer, rum punch, and of course — TEA! 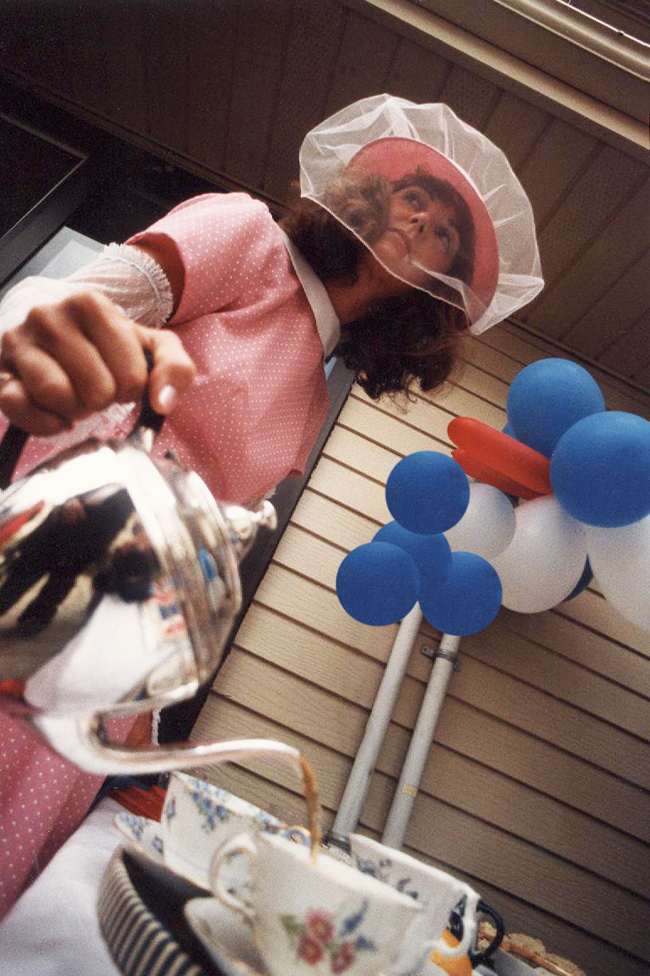 Guests were encouraged to come in “royal wedding attire” — a term that was interpreted pretty loosely.

Some people looked very dapper in tuxedos, while others chose to dress in Union Jack motifs. I’m pretty sure they would not be allowed into the royal reception dressed like this! 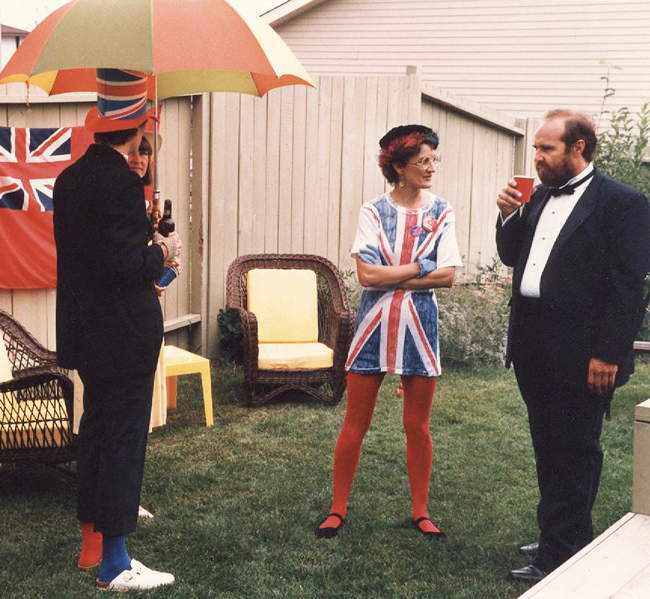 But I do love this beefeater costume, and the Royal Canadian Air Force uniform. 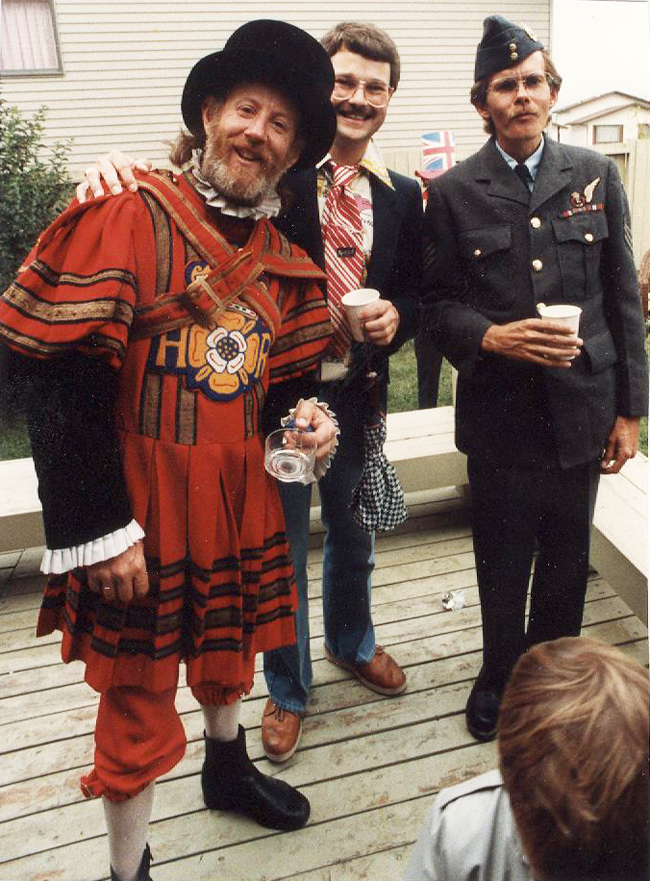 My daughter Katie, now all grown up, joined me again in the wee hours of April 29, 2011 to watch this wedding. Katie was soon to be married herself, so we had weddings on the brain. It was a source of great delight to see that Princess Kate’s dress had a lace bodice, just like the one my daughter wore at her own wedding. Ten years later, this is one royal marriage that seems to be working out. I hope they have a long and happy life together. 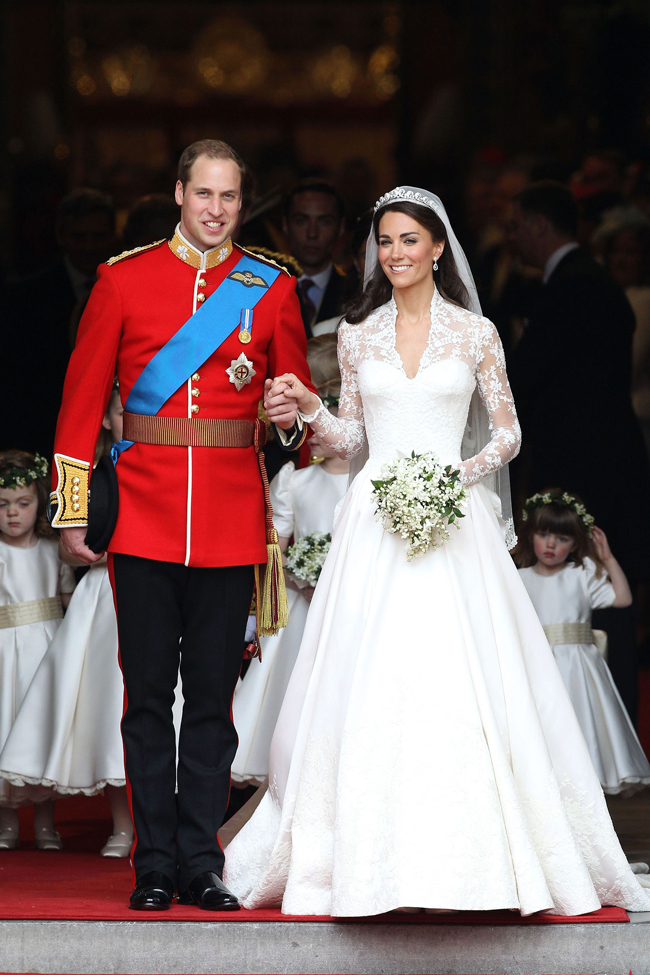 On July 1, 2016 — Canada Day, or Memorial Day as it is known in Newfoundland — my husband and I were at the best parade I have ever seen, because it was elaborate, touching and patriotic — in St. John’s, Newfoundland. This was the hundredth anniversary of Beaumont-Hamel, the ghastly First World War battle in France that basically wiped out the bulk of Newfoundland’s youth. The guest of honour was Princess Anne herself, the Colonel-in-Chief of the Royal Newfoundland Regiment.

Here’s my own photo of this modest and hard-working royal. Did you know she was nominated for the Nobel Peace Prize for her work with the Save the Children fund? And that she carried out more official engagements in the last year before covid than any other royal? 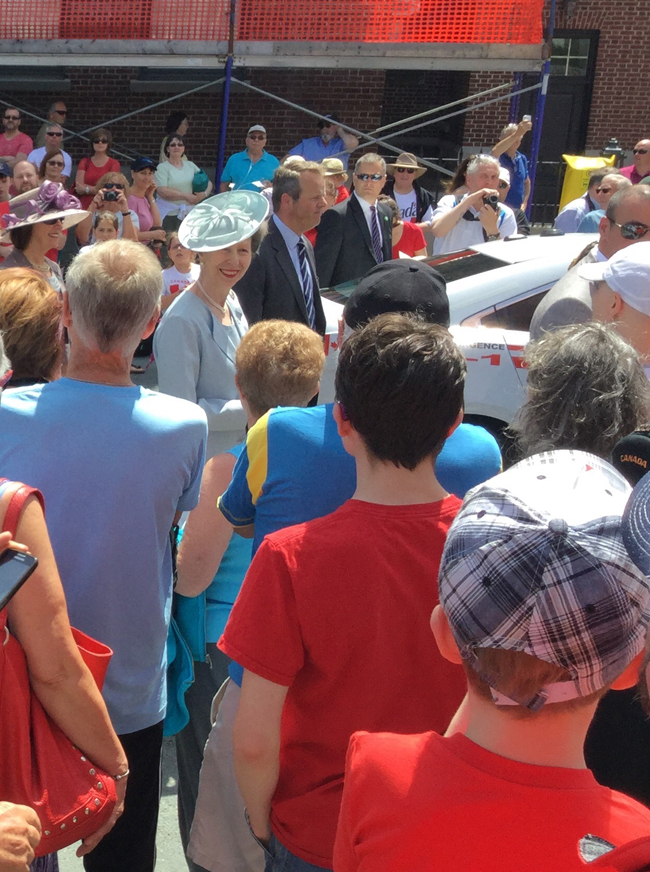 Was it less than three years ago that we watched this fairytale wedding, happy that Harry had found his true love, a beautiful biracial woman who was going to be such an asset to the royal family?

I still can’t fathom how it all fell apart so quickly. However, clearly the couple made the correct decision to leave, since the British tabloids (them again) and other unnamed sources were causing Meghan Markle so much mental distress.

My prevailing emotion is sorrow — for the Queen, who must cope with yet another family crisis; and Archie (and his unborn sister), if they become estranged from their father’s family, just as Meghan is estranged from hers.

Because families, no matter how flawed, are still very, very important. 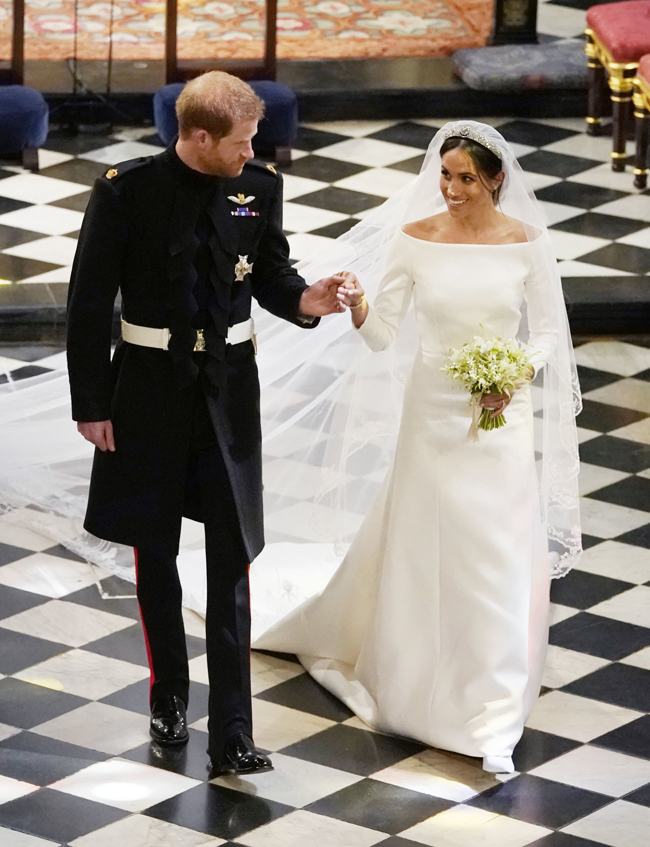 Meanwhile, I have masses of royal memorabilia. This is just a small sample. 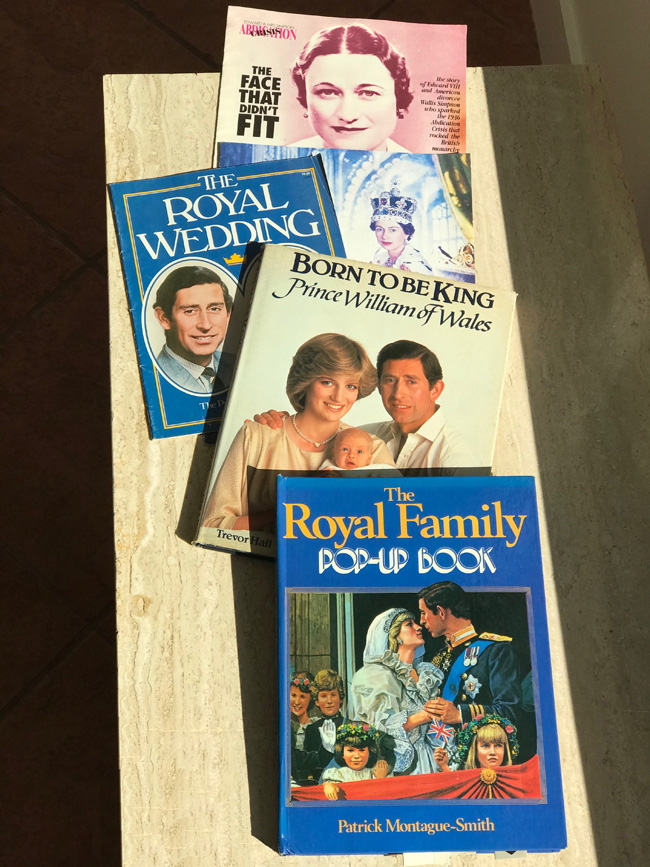 Here’s my favourite cookie tin, a souvenir of Elizabeth’s coronation in 1953. 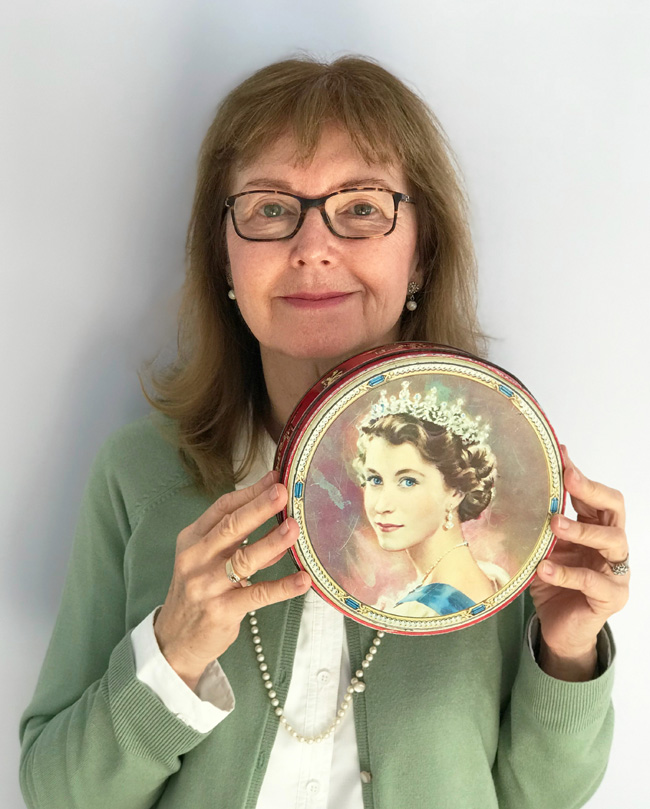 Whether you love the royals or hate them, or are completely indifferent to them, I know many of you Baby Boomers have shared these same moments in history.

I can’t predict whether young people, or Canadians, or citizens of other Commonwealth countries, or even Britons themselves — will want to continue their association with the royal family.

Perhaps the monarchy is finally approaching its twilight years. Only time will tell.

But I want to honour the past once again with two final royal stories.

When I was researching and writing my blog titled Wartime Wednesdays, I wrote two posts about the royal family during the Second World War.

Say what you will about the royal family, they really rose to the occasion when their country was in terrible danger.

Queen Elizabeth’s mother was such an inspirational force during the war that Hitler himself called her “the most dangerous woman in Europe.” Read her story by clicking here: Queen Mum in Wartime. 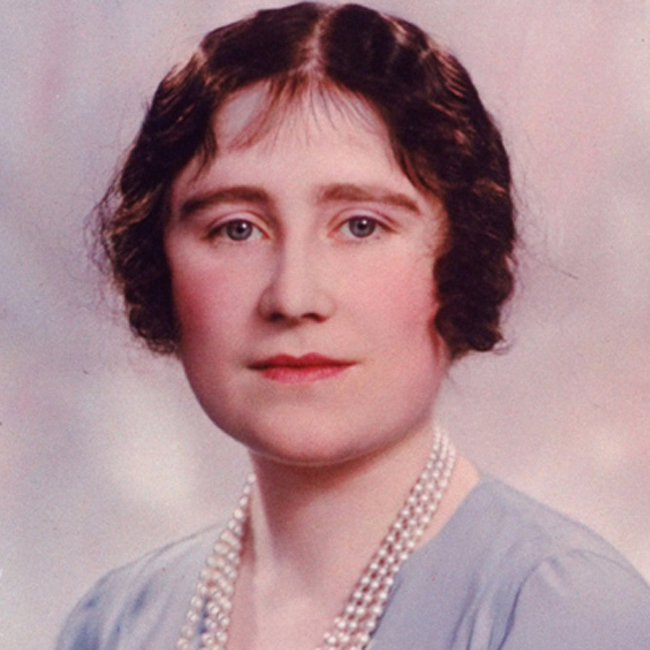 Young Princess Elizabeth came of age during the war, joined the armed forces, and began the public duties that would shape and define her entire life.

She is currently the only living crowned veteran in the world. Read her story here: War Veteran Wears a Crown. 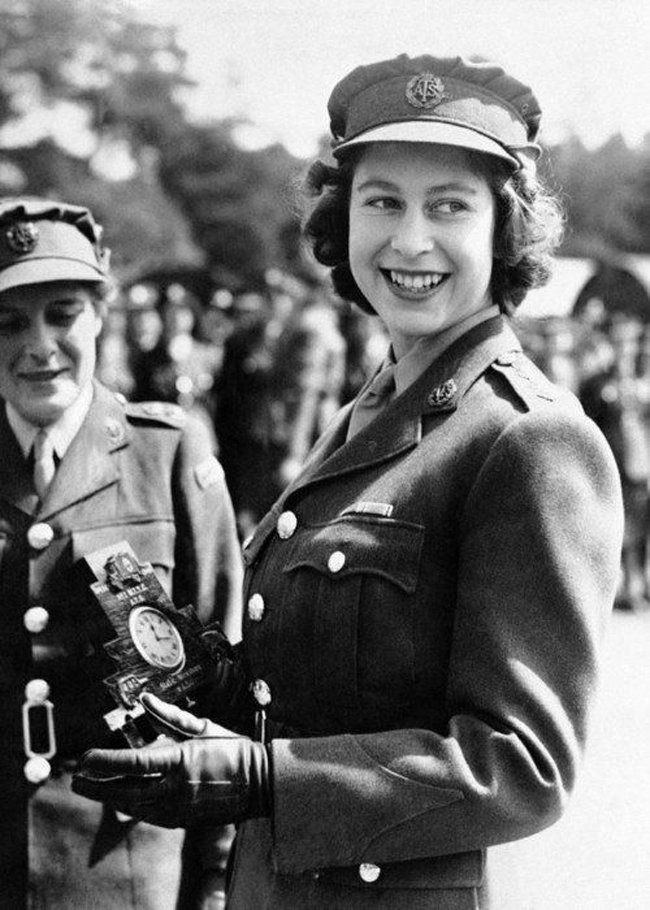 Speaking of wartime, this upcoming event is a FREE AND OPEN ZOOM call for anyone who would like to hear me discuss my wartime novel, Bird’s Eye View.

If you have read the book, plan to read the book, or would like to hear more about the book before making a decision, I’ll be appearing on the Worldwide Web at 7:30 p.m. Mountain Standard Time on Thursday, April 29, 2021.

For a free link to the event, email: kootenaylibrariesprogramming@gmail.com.

I won’t be able to see you, but I hope you’ll join me! 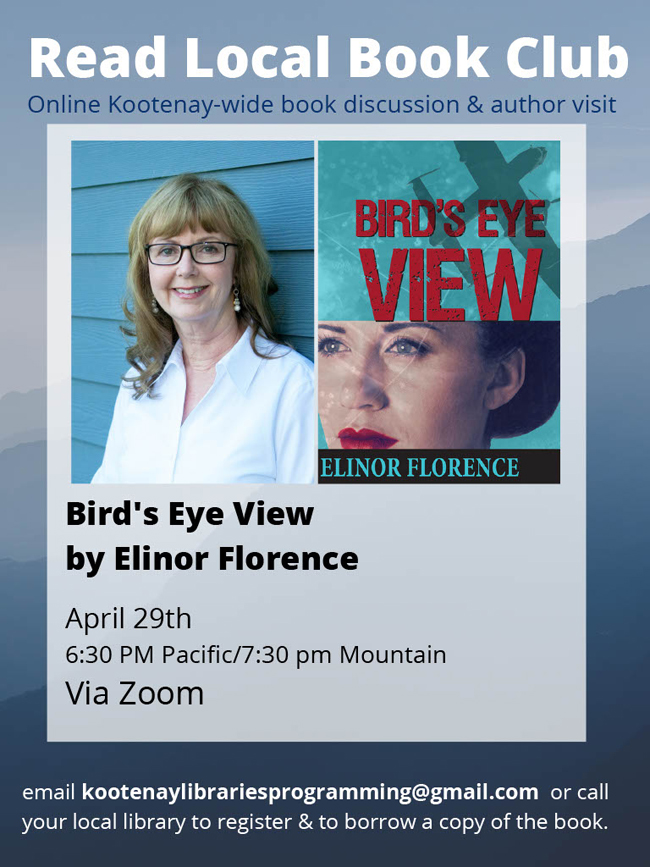 Friends, do you have royal family memories of your own? I would love to read them posted in the Comments section below.