A chance sighting of an old grave marker in Fernie, British Columbia, awakened fresh sympathy for a family who suffered the worst blow of all — not once, but twice. 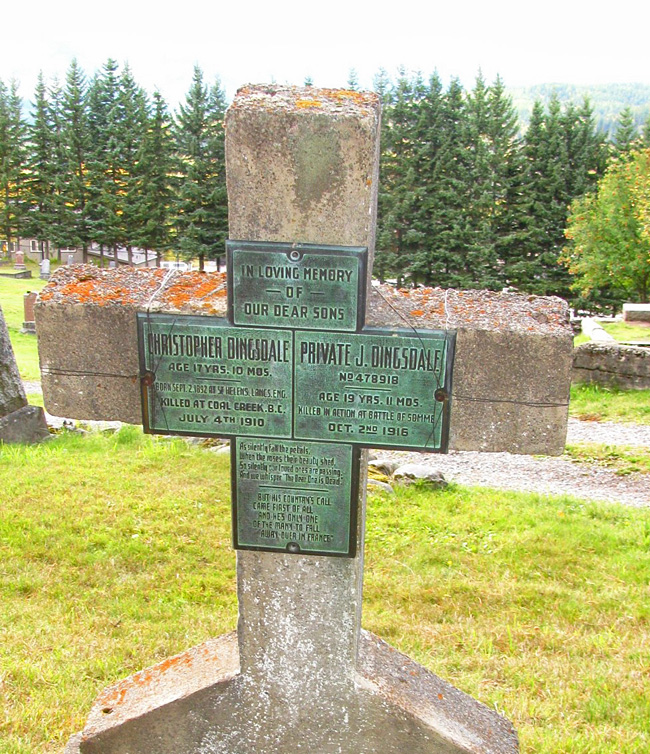 Most of my writing is related to aviation and aviators, but during a recent stay in Fernie, British Columbia, the grave of a young soldier of the First World War prompted thoughts of remembering the men and women who have served in Canada’s armed forces, and who continue in service today. 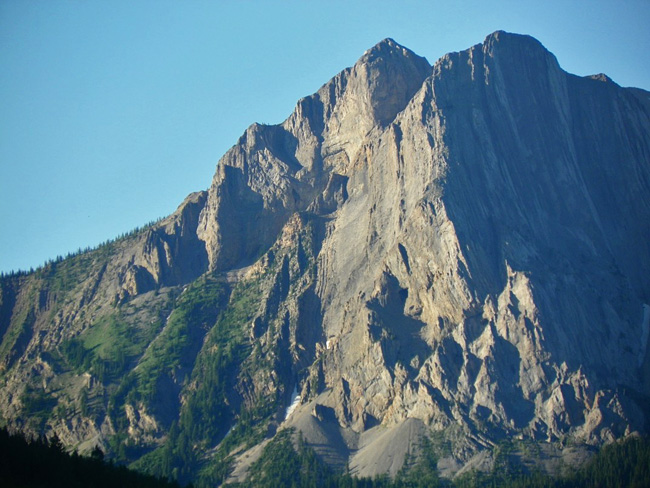 My wife, Linda, and I had occasion to spend two weeks in Fernie while our daughter and son-in-law were away on vacation. With three lively grandsons to care for — age 6, 10 and 14 — there was never a dull moment!

Early in our stay we got the boys started in school, since the provincial teachers’ strike had just ended. Then we had the opportunity to meet teachers, and worked out the daily routines of making lunches, getting the boys off to school, and making arrangements for Taekwondo, trampoline and boxing classes.

Our time in Fernie also provided the opportunity to get to know the city better by shopping at the stores downtown, buying groceries, trying some of the restaurants, and for me, a good morning swim after seeing the boys get to school.

Other trips to Fernie’s excellent Aquatic Centre were fun for all of us, and one afternoon included a game of disc golf, throwing frisbee-like discs to targets of chain baskets among the trees in a forested park.

We have been to Fernie before to see our family, and again appreciated the clean streets and the breathtaking mountain scenery that surrounds the town. How fortunate we are to live in Canada! We never tired of seeing the Ghostrider make an afternoon appearance on Mount Hosmer.

Look closely to see a shadow cast on the mountain in the image of a native girl and her father riding a horse in pursuit of William Fernie, who developed the coal deposits in the area and for whom the town is named. Legend says when he jilted the girl, a curse was placed upon the town and it remained until lifted at a public ceremony in 1964. 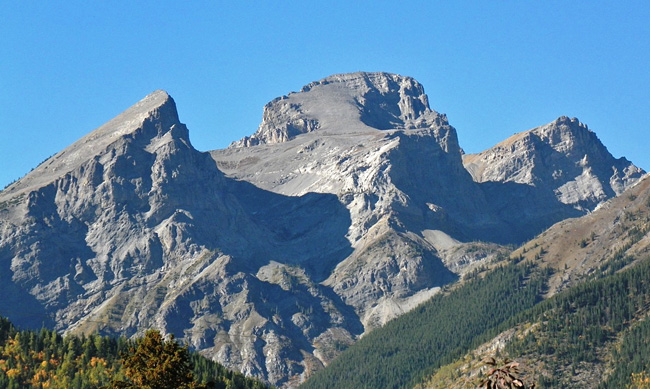 Surrounded by mountains, Fernie affords spectacular scenery in every direction, whether it be Mount Fernie; the Three Sisters, sometimes known as Trinity Mountain, I am told; or the nearby range that accommodates the ski hills.

I asked the boys what they liked most about Fernie. “When we lived in Calgary,” said the youngest grandson, “all I could see was buildings. In Fernie, everywhere I look I can see mountains!” 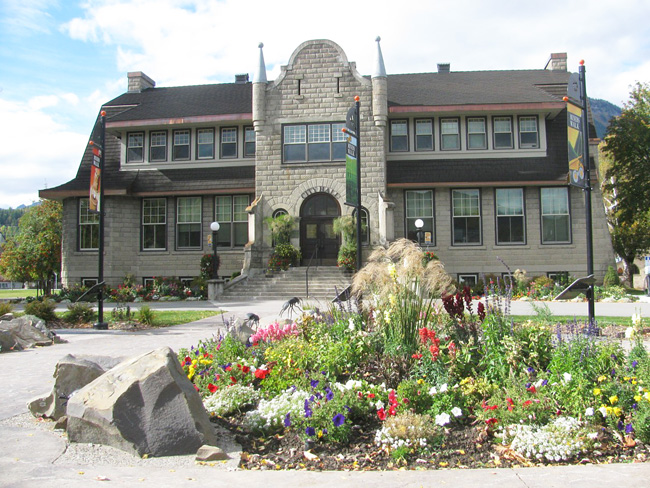 One day after school I took the boys to the Fernie Miners Walk in front of City Hall to learn about the city’s history. Built in 1905, the impressive stone building survived the devastating fire that destroyed much of Fernie in 1908. Other subjects for my camera included flower baskets on Victoria Avenue, historic buildings in Fernie such as the brick post office building that now houses the city’s library, and the memorial statue of the soldier commemorating Fernie’s losses in the First World War.

Next to the gardens in front of Fernie’s City Hall, the signs of the Miners Walk give a brief colourful history of the city.

For another history-related experience, the boys and I made a visit to St. Margaret’s Cemetery, and when I showed them the grave marker of Private J. Dingsdale, they were especially interested. 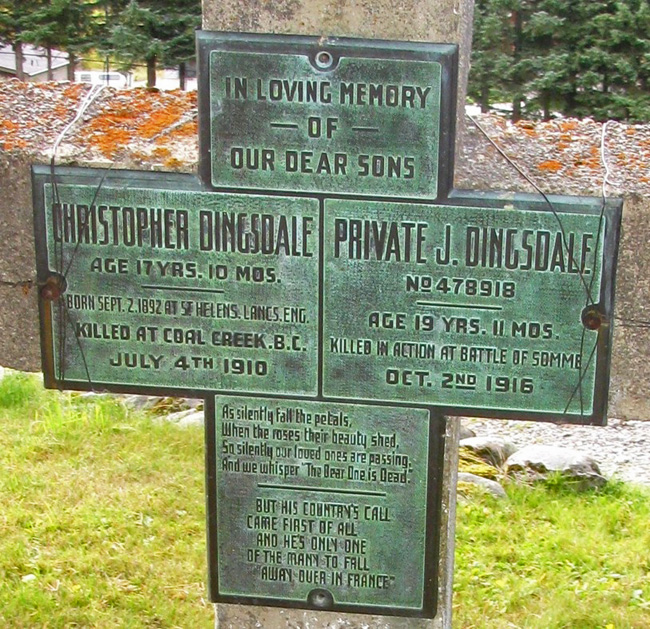 A check on the internet website of the Commonwealth War Graves Commission confirmed my suspicions. Private J. Dingsdale, service number 478918, served with the Royal Canadian Regiment. His attestation papers, found on the Library and Archives of Canada website, state that he was born in Lancashire, England and was residing in Esquimault, British Columbia when he joined up on March 1, 1916. He lists his occupation as “Miner.”

Seven months later, he was dead. 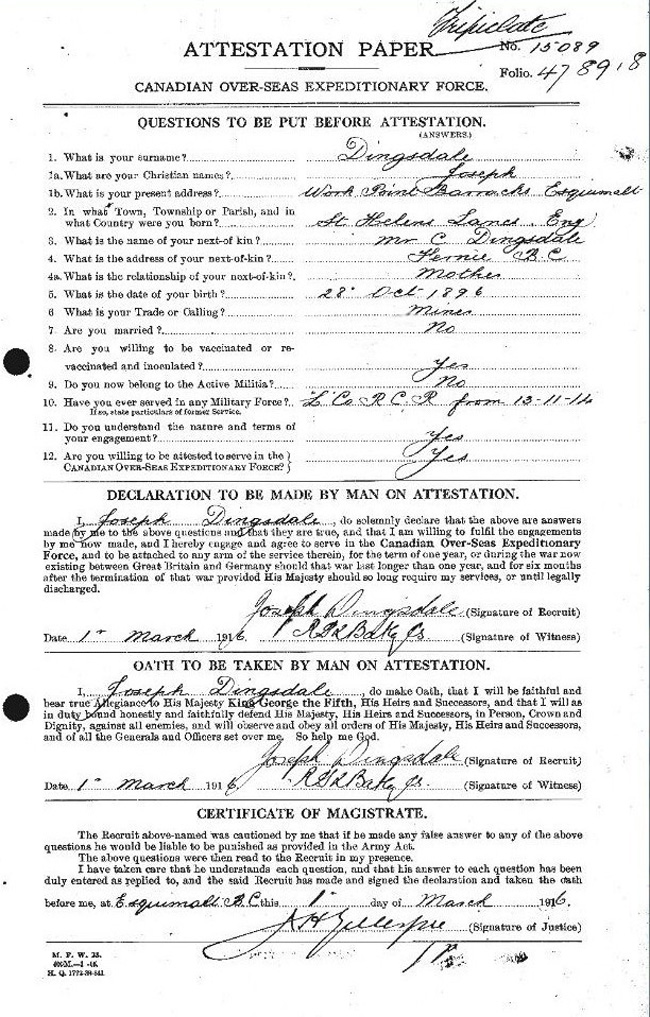 Since he died on October 2, 1916 he couldn’t have been on active duty more than a few months, perhaps weeks.

He is buried near the village of Courcelette in the Somme district of France, in Courcelette British Cemetery, shown in the internet photo below.

There the grave of Private Dingsdale is one of 1,970 Commonwealth servicemen buried near the scene of battle during the war. Like other military cemeteries in Europe, the graves of those who are buried there are cared for in perpetuity.

Having seen several such cemeteries in Europe, I am grateful for the ways in which Canadians are remembered, even though they never returned from war.

The most impressive wartime monument we saw is the one at Vimy Ridge, seen during travel in France, shown below. Rededicated in 2007 after restoration, the memorial is returned to its original glory. We were fortunate to be there on a perfect day with enough time to take in its majesty and detail, humbled by the terrible losses at the Battle of Vimy Ridge. 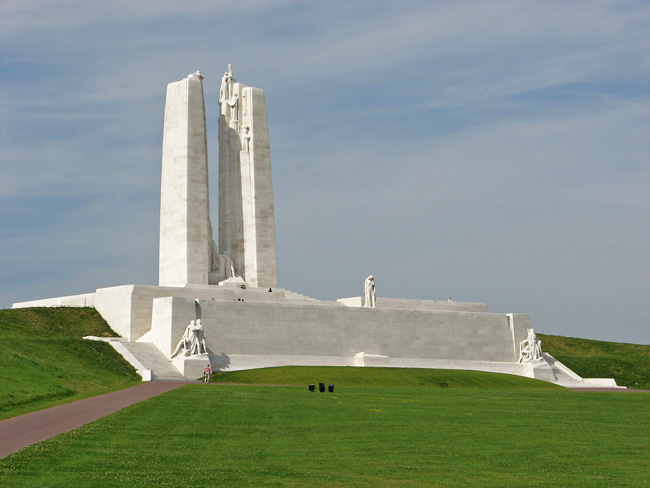 My grandsons were intrigued to learn of Private Dingsdale and interested in seeing the graves of other soldiers, reading the dates of their deaths, and wondering if they died in active service, in battle, or lived out a normal life. As for myself, I continued to wonder — what was Private Dingsdale’s first name?

I found my answer at the war memorial on the grounds of the impressive 1909 Fernie Court House, where the statue of a soldier stands upon a monument that honours the young men of Fernie who fell during the Great War. Among the names of all those young men, carved into the stone, is that of Joe Dingsdale. Now I knew his name. 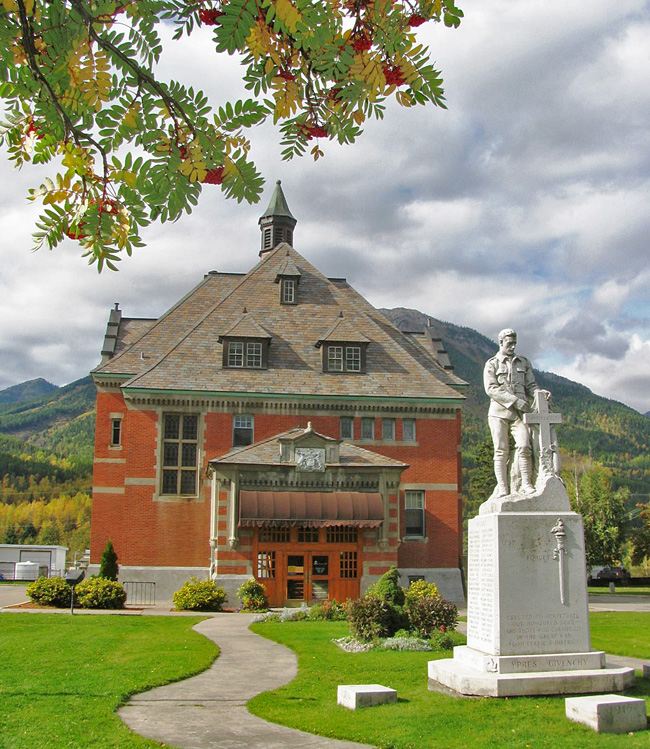 Private Joe Dingsdale, along with the others named on the monument, is not forgotten and perhaps somewhere in British Columbia, there is family that remembers the young soldier who left Fernie a century ago and went overseas to defend the Empire.

In this 100th anniversary year of the start of the Great War, those who never returned from it must not be forgotten.

It is appropriate to honour the men and women who have served Canada’s armed forces in time of conflict and peace, especially those who gave their lives to protect the life we enjoy today in Canada, and to appreciate the splendour of the primeval forests and the timeless mountains of Fernie.

John Chalmers is a writer who lives in Edmonton, Alberta, and serves as the Historian for Canada’s Aviation Hall of Fame and as Membership Secretary for the Canadian Aviation Historical Society. He can be reached at johnchalmers@shaw.ca.

Thanks, John, for this moving tribute to a couple of Fernie boys who died far too soon.. 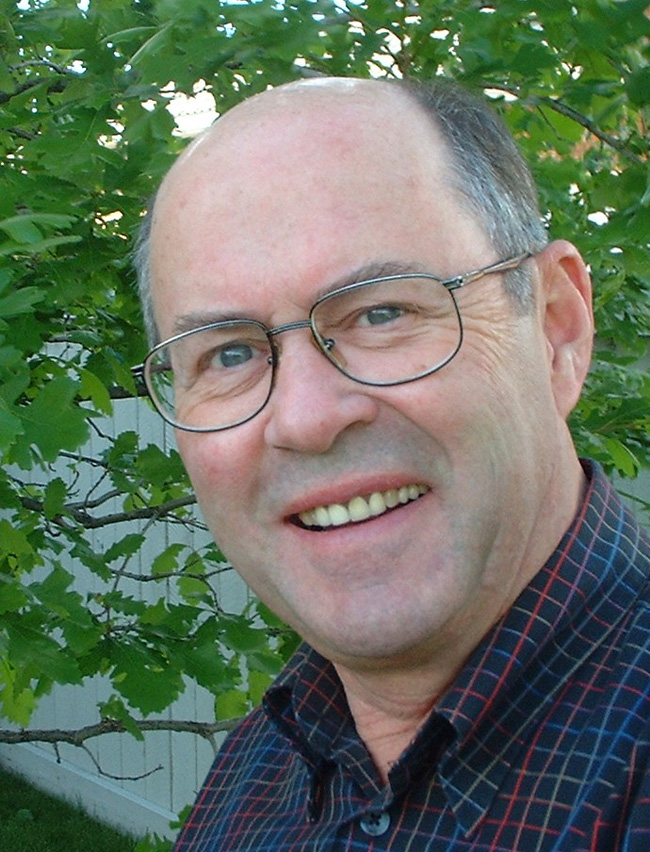 The Star Weekly was a Canadian newsmagazine published by the Toronto Star. During the Second World War, a colour illustration with a wartime theme appeared on the cover each week. Here’s an image showing a member of the V.A.D., or Voluntary Aid Detachment. This was a volunteer nursing group that started in 1909 and continued through both world wars. Many of their members were decorated for distinguished service. To see my entire collection of Star Weekly covers, click: Star Weekly At War. 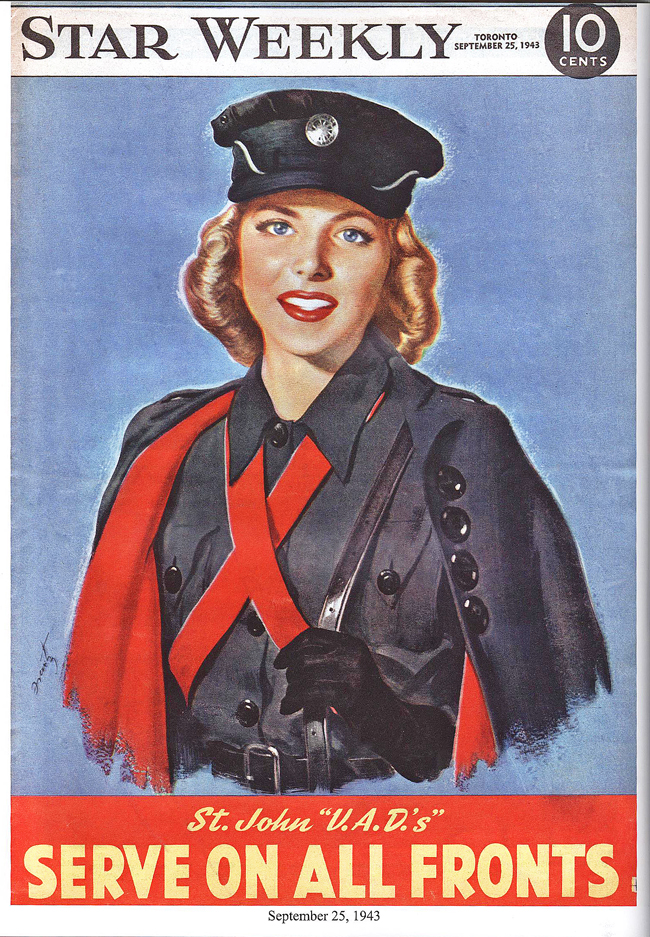