Wartime television series, with time for extra action, more suspense, and greater character development than a two-hour movie, can be absolutely gripping.

Regular readers may remember that I created a list of top ten wartime aviation movies, which you can read by clicking here: Ten Flyer Flicks Worth Watching.

But there are many great made-for-TV shows – dozens of them, as I found when I searched the internet. Through the power of such sources as Netflix and YouTube, most of them are available for viewing.

In no particular order, here are my TOP TEN personal recommendations. 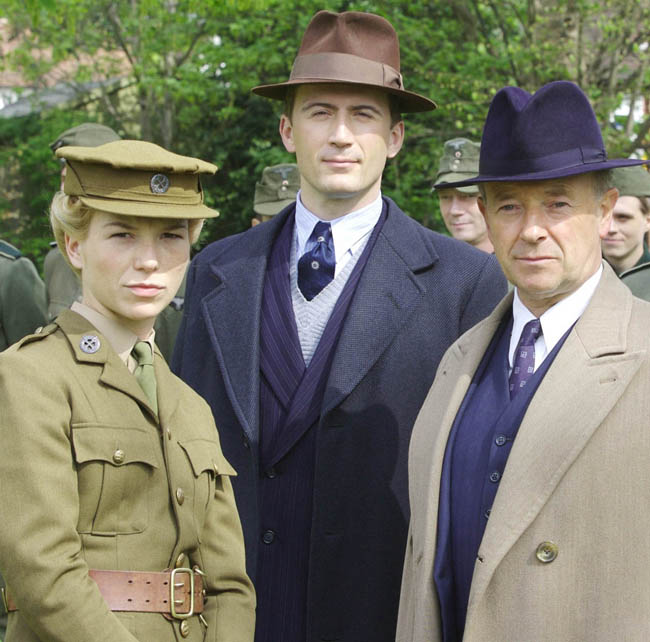 When people find that I’m interested in World War Two, they often ask me if I have seen Foyle’s War. That seems to indicate the popularity of this British crime series, and for good reason.

Detective Chief Inspector Foyle, a widower, is quiet, methodical, and scrupulously honest, and frequently underestimated by his foes. Many of his cases concern profiteering, the black market, and murder, set against the backdrop of war.

My husband says it’s a little tame for him – but I love the plots and the characters. Foyle is played by the excellent Michael Kitchen, his assistant is played by Anthony Howell, and his driver is played by Honeysuckle Weeks (don’t you love her name?)

This long-running series is finally drawing to an end, after completing its eighth season. Honeysuckle says she is looking forward to acting in something where her costumes are more interesting than a uniform — she has worn one in every episode since the series began in 2002. 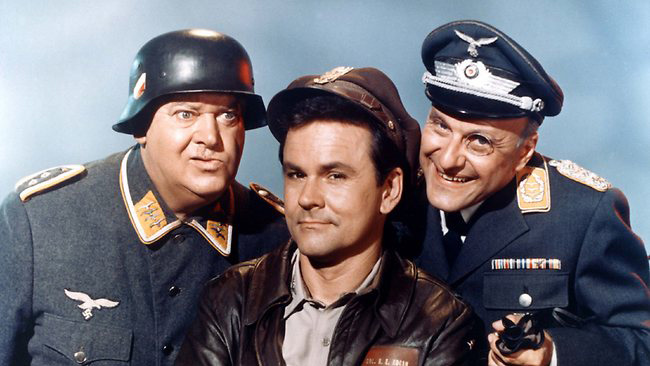 Most of us baby boomers remember Hogan’s Heroes. As kids, my brother and I thought it was hilarious to pull a Sergeant Schultz whenever our mother asked us something (“I know nothink, nothink . . .”)

For six long years – as long as World War Two itself – a band of captured Allied airmen under Robert Hogan (played by Bob Crane) ran circles around the bumbling German buffoons who ran the fictional prison camp called Stalag 13. As I recall, the humour was pretty juvenile and yet the show was immensely popular. 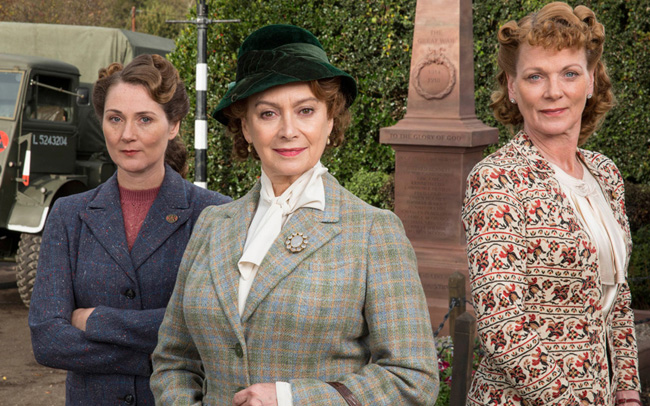 Naturally the British have a somewhat different take on the war – it was THEIR homes, THEIR families who were under direct threat of invasion and occupation. Although some people scoff at Home Fires for being sappy, I prefer to think of it as heartfelt.

Home Fires began last season with six episodes and is heading into a second season. The drama follows a group of inspirational women in a rural community, played by some familiar and well-known British actors, with war casting a dark cloud over their lives.

By banding together as the Great Paxford Women’s Institute, they discover inner resources. Since so many women during the war had to keep the home fires burning, as the old song goes, the title is very apropos. 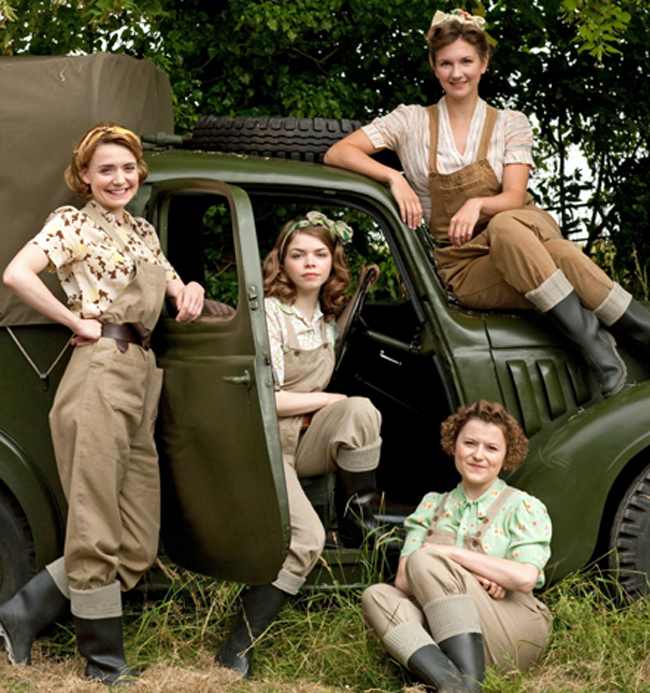 In the same vein, Land Girls was commissioned by the BBC to commemorate the seventieth anniversary of World War Two.

The series follows the lives of four girls away from home, doing their bit in the Women’s Land Army. Set on the Hoxley Manor estate, the series depicts how the girls balance their working lives at the run-down pasture farm with the opulent living conditions at the estate.

The series has now ended, but there are fifteen episodes altogether, three seasons with five episodes each, that ran from 2009 to 2011. 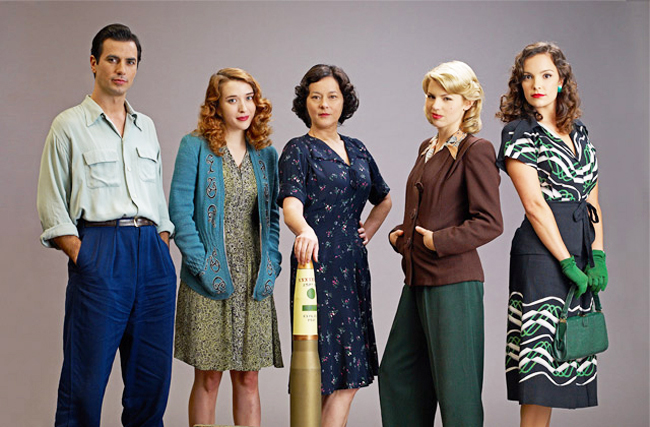 Canada’s answer to the women-on-the-home-front theme features a group of women working in an Ontario munitions factory. The first season aired in 2012 with six episodes, and the second season in 2013 with twelve episodes.

In spite of rave reviews and a growing audience, Global TV elected to cancel the series. Fans were so irate that the company agreed to make one last two-hour movie to wrap up the storylines, called Bomb Girls – Facing the Enemy. That aired in 2014.

Of course, I like this one because it is about Canadian women on the home front – and there were ONE MILLION Canadian women working in factories in wartime. 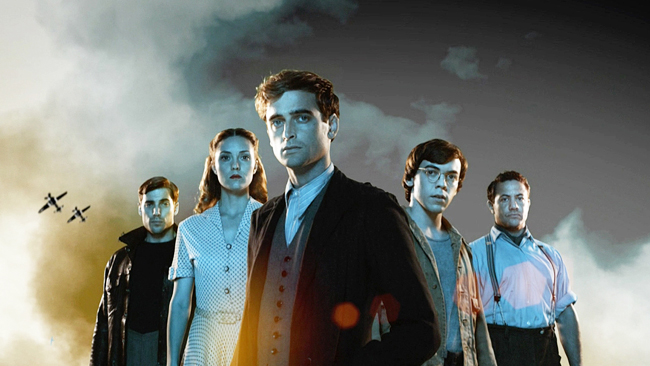 True confession: I have not watched this show YET, but I hear it’s good. Best of all, Camp X was a real place that most Canadians know little about.

Here’s the official description: X Company is an emotionally-driven character drama, set in the thrilling world of wartime espionage and covert operations. It follows the stories of five highly skilled young recruits — Canadian, American and British — torn from their ordinary lives to train as agents in an ultra-secret facility on the shores of Lake Ontario.

These agents parachute behind enemy lines, where they’re fair game for torture. From elegant hotels to hellholes in the field, it’s one risky operation after another, masterminded by the brains of Camp X. 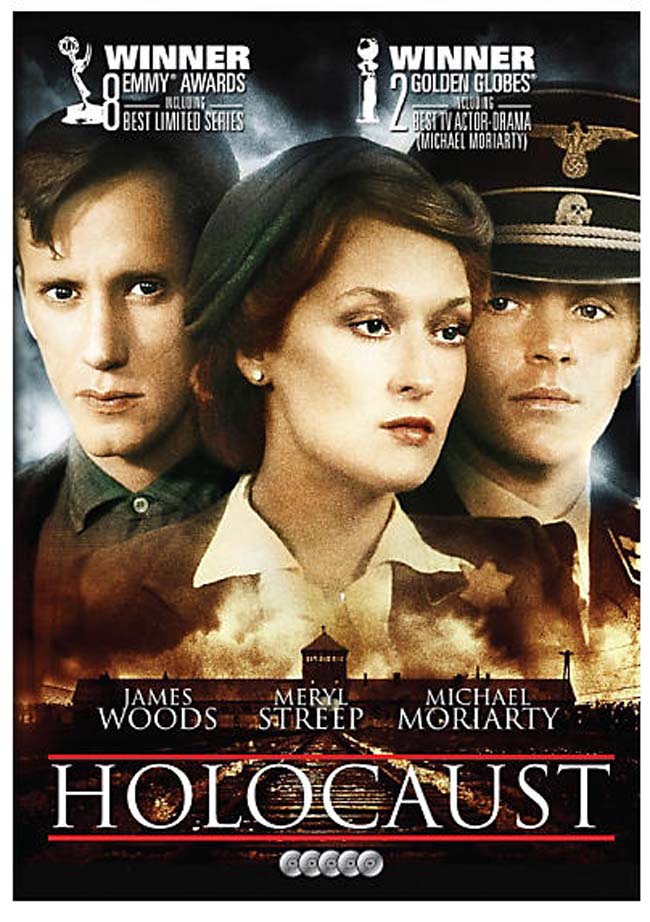 When this four-part miniseries aired back in 1978, I was glued to the screen each week along with millions of other rapt watchers.

The series tells the story of the Holocaust from the perspective of the fictional Weiss family of German Jews, and that of a rising Nazi who gradually becomes a merciless war criminal.

Although the miniseries won several awards and received critical acclaim, it was criticized by some Holocaust survivors who said the brutality was toned down for television. Nevertheless, I found it very compelling (especially because you don’t know which family members, if any, will survive.) The show won an Emmy and so did three of the actors, including a young Meryl Streep. 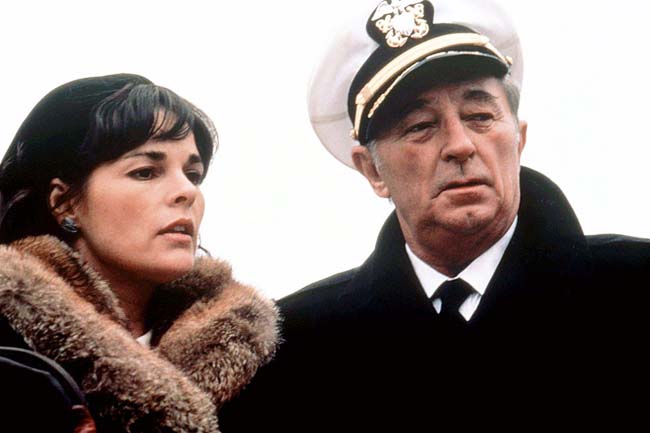 This fifteen-hour miniseries follows the plot of Herman Wouk’s novel closely, depicting events from March 1939 until the entry of the United States into the war in December 1941. It was an ambitious project, filmed in Germany, the United States, Italy, the United Kingdom, Yugoslavia and Austria.

Winds of War was shown by ABC in seven parts over seven evenings in February 1983 and attracted an average of 80 million viewers per night.

I love Herman Wouk’s books, and the author himself exerted his influence to keep the TV series true to the original story. Victor “Pug” Henry, played by Robert Mitchum, has just been appointed U.S. naval attaché in Berlin when the war begins. His wife and each of his three adult children have their own story lines. Pictured above is Robert Mitchum and Ali McGraw.

My only criticism is that Robert Mitchum was pretty wooden in his acting – a problem that grew even worse in the sequel. 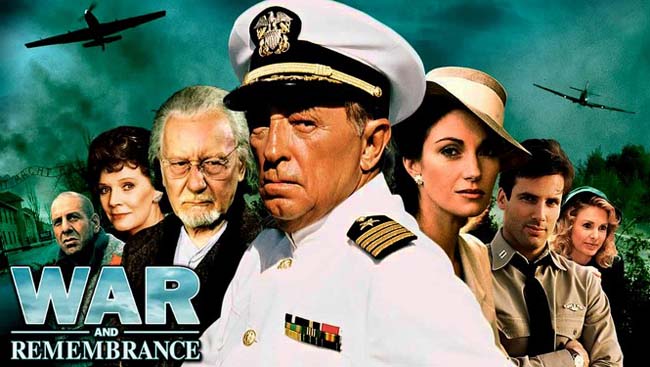 Winds of War was so successful that the second series, based on Herman Wouk’s sequel of the same name, was born. It consisted of thirty hours that aired in 1988. It continues the story of the extended Henry family and the Jastrow family, starting when the Americans finally entered the war in December 1941 and continuing through to war’s end.

Pug Henry takes part in various battles while separated from his wife. Pug’s older son Warren, a naval aviator, and younger son, Byron, a submarine officer, also participate in combat. Byron’s wife Natalie is trapped in Axis territory with her uncle, celebrated author Aaron Jastrow, and another major storyline focuses on their plight as Jews caught in Europe. 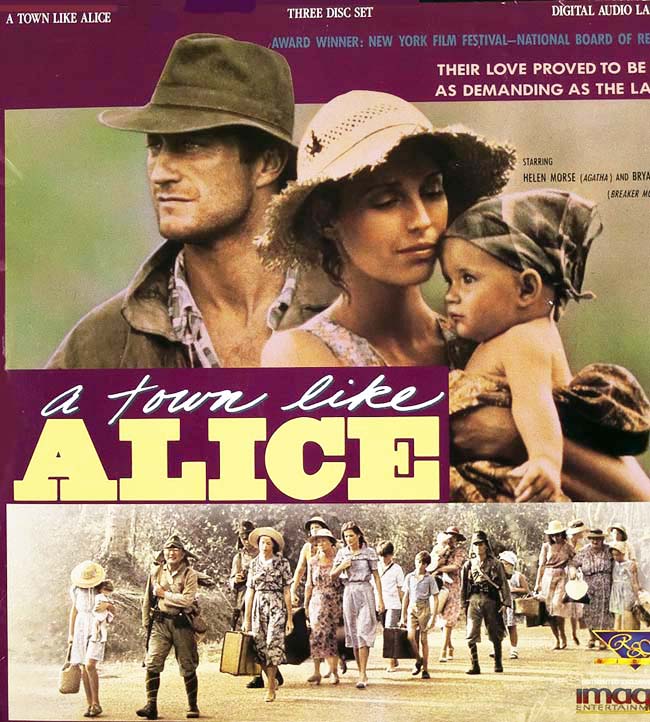 I almost didn’t include this one, because it is impossible to find a digitally-remastered copy. The best you can do is to locate a DVD copied from an older VHS version, and the quality is poor compared to what we connoisseurs expect now. There’s a reason – this five-hour miniseries was made in Australia, and there has been a battle going on ever since about who owns the rights.

If you can get beyond the quality, this is a very moving story. If you read my post about my favourite wartime books, you already know that A Town Like Alice by Nevil Shute is one of my favourites. (Click here: Best Wartime Fiction).

Nobody could wring your heart like Nevil Shute did. I recall back in 1981 jumping up from a dinner party and rushing home to watch the next episode, thereby offending my hostess, but back in the days before you could record shows, it was watch them live or not at all!

The heroine is a British woman played by Helen Morse, who is captured by the Japanese and placed into prison camp in Malaya; the hero is played by the dishy Australian actor Bryan Brown, the Aussie POW who is tortured for a simple act of kindness. I won’t reveal the brilliant twists and turns of this memorable story. At the very least, read the book. 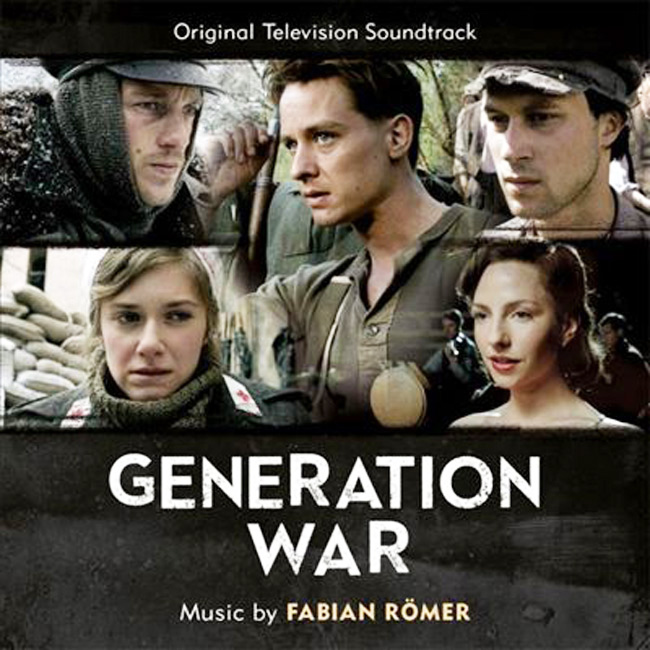 And here’s one last bonus suggestion. This is a refreshingly different approach—it takes five young friends from Berlin, all aged around 20 when the war breaks out, and follows their path through Nazi Germany: two boys become soldiers on the Eastern Front with Russia, one boy is a Jewish tailor’s son, one girl becomes a nurse, and the other girl a nightclub singer.

It was originally titled “Our Mothers, Our Fathers”) in German, which I think is a better title than Generation War. It is an attempt to explain to younger Germans just what their parents and grandparents experienced, and why.

When the series first aired in Germany, each episode garnered around seven million viewers and generated much controversy. Obviously something this politically charged couldn’t escape criticism from a number of quarters, but I thought it was a good attempt to explain how young Germans got caught up in the war machine, and how dreadfully they suffered.

It’s the only show I have ever watched where I found myself rooting for the Germans, at least on an individual level! Guys, if you like lots of fighting action, you will find it here.

Readers, I know you will have favourites of your own. Please comment below if you want to share them!

The Star Weekly was a Canadian newsmagazine published by the Toronto Star. During the Second World War, a colour illustration with a wartime theme appeared on the cover each week. Here’s an image dated September 5, 1943, showing a Russian cavalry attack–yes, our hard-fighting and often overlooked ally was still using horses during the Second World War. To see my entire collection of Star Weekly covers, click: Star Weekly At War. 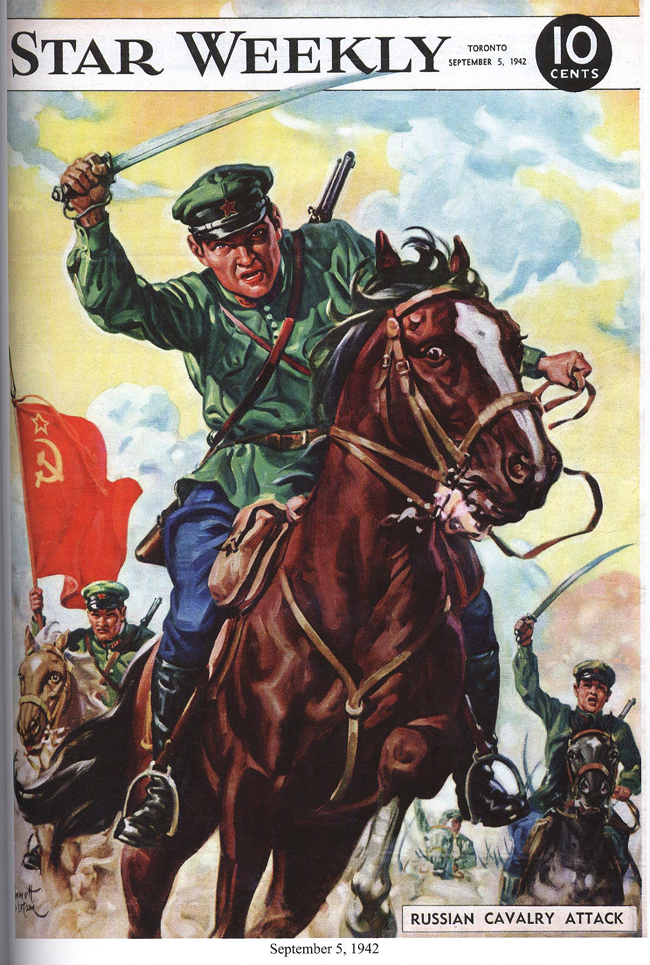