I saved this topic for Christmas Eve, simply because it is so inspirational. The rebuilding of the bombed Church of Our Lady in Dresden, Germany, is a heart-warming example of renewal and redemption. Please look at the before and after pictures to see what I mean. 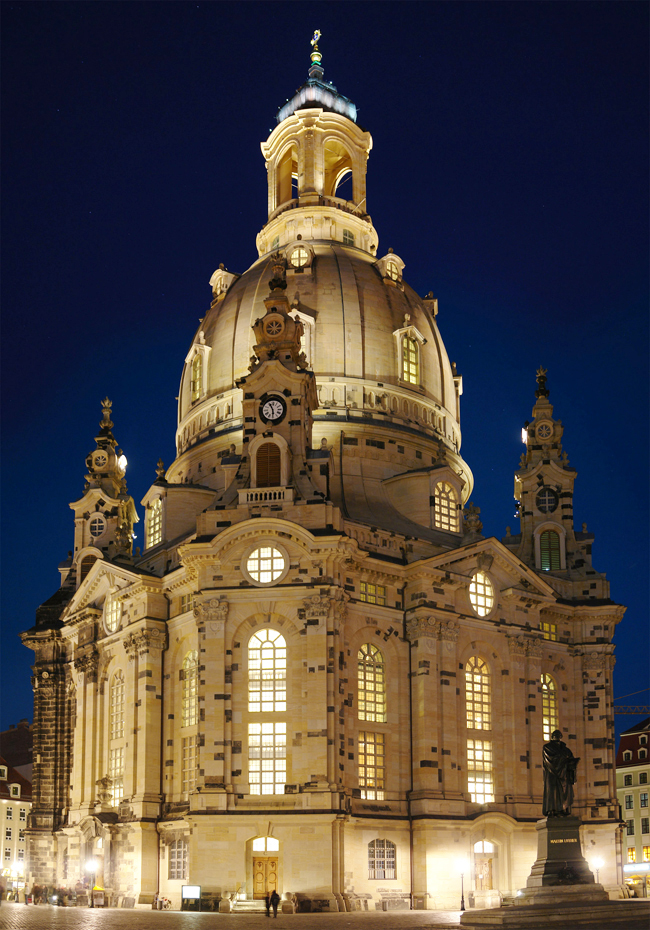 I don’t want to discuss the controversy surrounding the bombing of Dresden, Germany, which took place near the end of the war.

To this day some experts feel that it was entirely justified, while others (including Winston Churchill) later expressed their doubts.

But just to give you a little background about this terrible event:

Dresden is the baroque capital of Europe, a cultural landmark on the banks of the Elbe River in eastern Germany.

In one three-day period, the British Royal Air Force and the U.S. Air Force carried out four bombing raids on Dresden, from February 13 to 15 in 1945.

The exploding bombs, plus fire-starting bombs called incendiaries, created a firestorm that flattened the city centre, and killed 25,000 to 35,000 people.

Precise figures are impossible due to the huge number of refugees who fled into Dresden to escape the advancing Russian Army. The city lacked anti-aircraft guns and was virtually defenceless.

The following photos are shocking, but I must give you an idea of what the city looked like after the raid, so that you can fully appreciate the contrast between then and now.

This 1945 photograph of the statue on top of city hall overlooking the ruined city became one of the iconic photos of World War Two. (Photo Credit: Richard Peter, Getty Images). 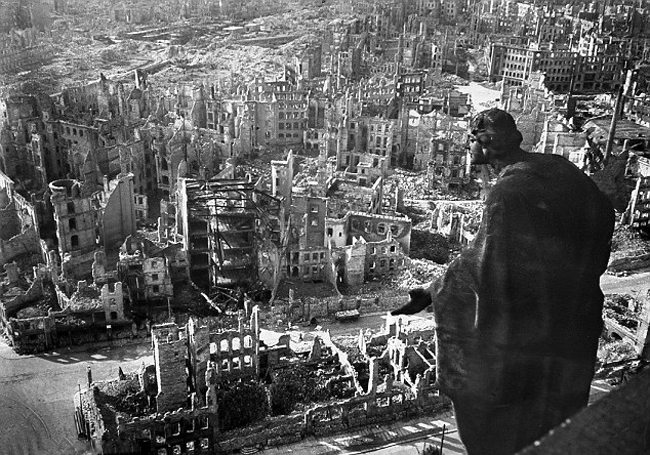 There were far too many bodies to bury, so the remains were stacked up in the Old Market Square, called Altmarkt, and cremated instead. 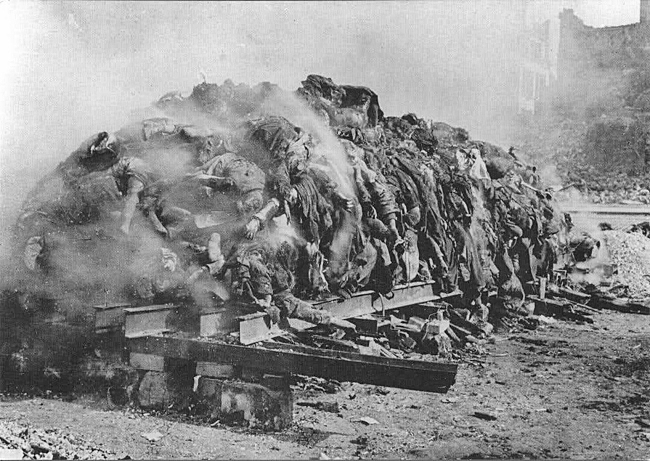 This woman’s body was found in an air raid shelter, which was no defence against the intense heat. (Photo Credit: Deutsche Fotothek). 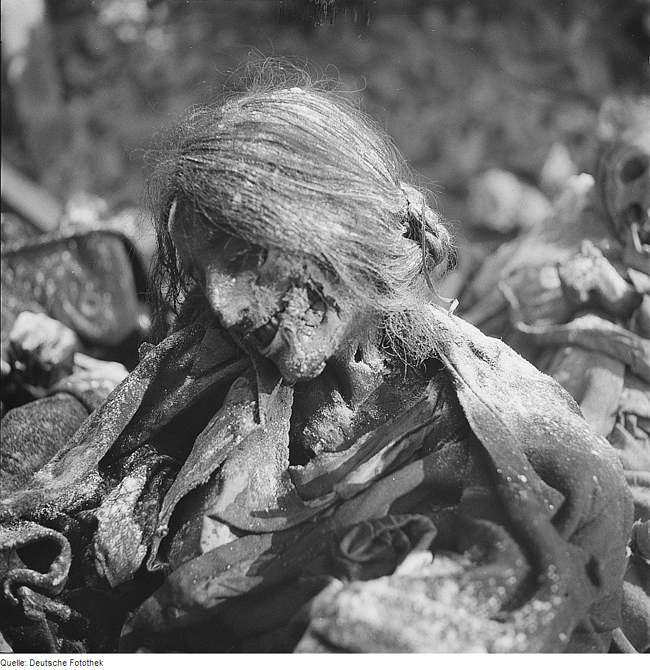 The landmark church in the centre of Dresden, one that could be seen for many miles around, was a baroque-style Lutheran church named Frauenkirche, or Church of Our Lady, completed in 1744. 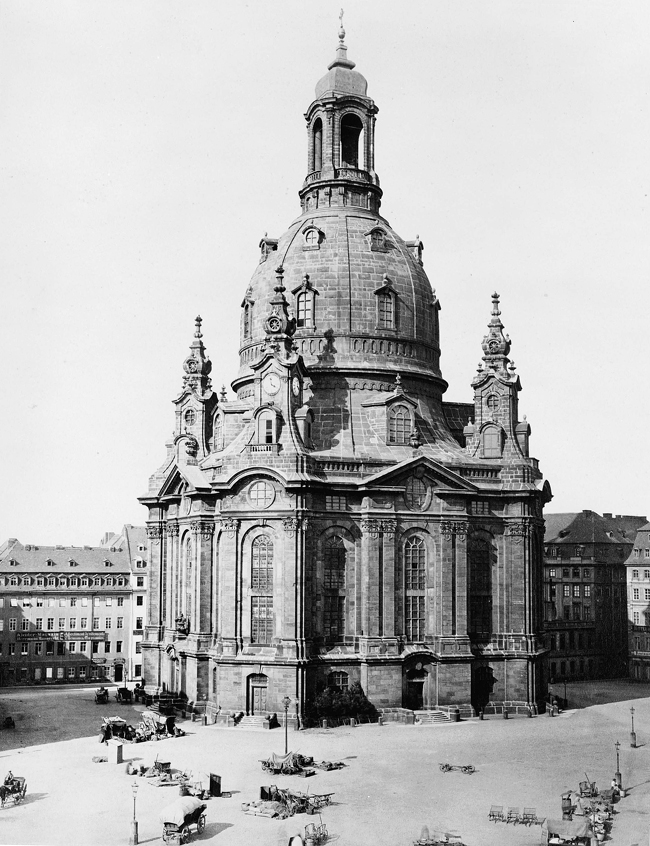 In 1945, the Church of Our Lady withstood two days and two nights of attacks before surrendering to the bombs. The heat generated by 650,000 incendiary bombs set the city centre aflame, and caused the supporting pillars to glow bright red.

At 10 a.m. on Thursday, February 15th, the pillars finally gave way, and 6,000 tons of stone collapsed into rubble.

Here’s what remained of this historic building. 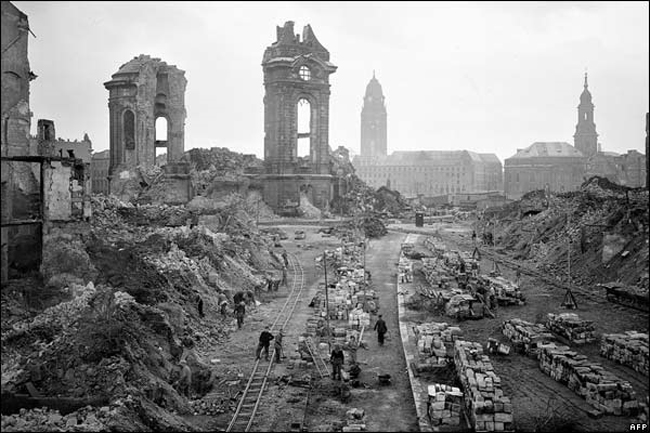 Less than three months later, Germany surrendered. As part of the Allied settlement, the country was divided into two parts. Since Dresden was situated in East Germany, it fell under the control of the Soviet Union.

The Communists decided to leave the rubble as a symbol of Allied aggression. Miraculously, this bronze statue of Martin Luther survived, to stand guard over the remains of his church. 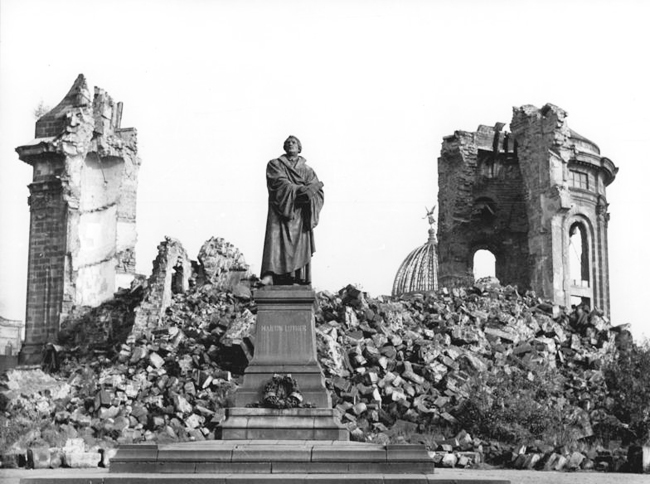 And there the ruins remained for another five decades.

Even as the buildings around the city centre were gradually replaced, the people of Dresden became accustomed to seeing a pile of rubble in the heart of their beautiful city. Here’s a photo taken in 1973, twenty-eight years after the war ended. 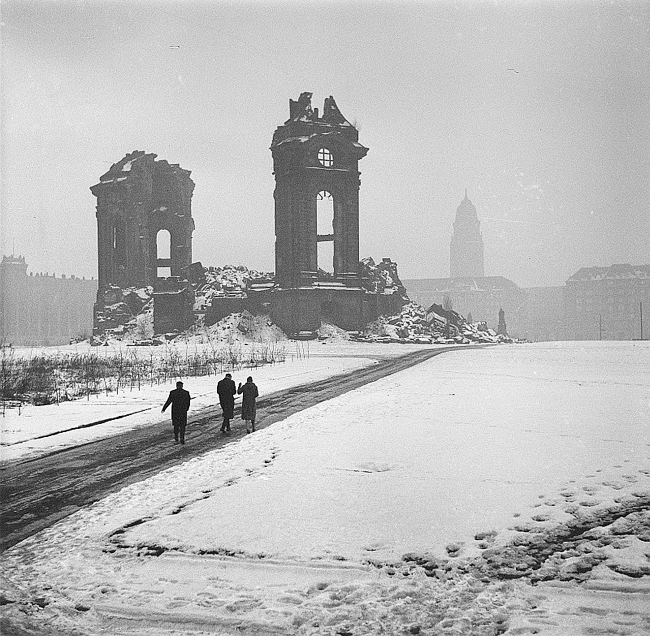 Then, in 1990, the wall separating East and West Germany came down. The Russian soldiers withdrew back to their own country (very reluctantly, by all accounts – where would you rather live, Dresden or Siberia?) and Germany became one united country again.

It was a long-held dream among many Dresden residents that their church would rise again. Looking at photographs of the rubble, it seemed that their dream was just that – a hopeless fantasy.

However, the work soon began. Hundreds of architects, art historians, and engineers jumped on board, sorting through the rubble, while others began the monumental task of fundraising.

The blackened stones that had been lying in a heap since 1945 were meticulously sorted into shelves, and catalogued. 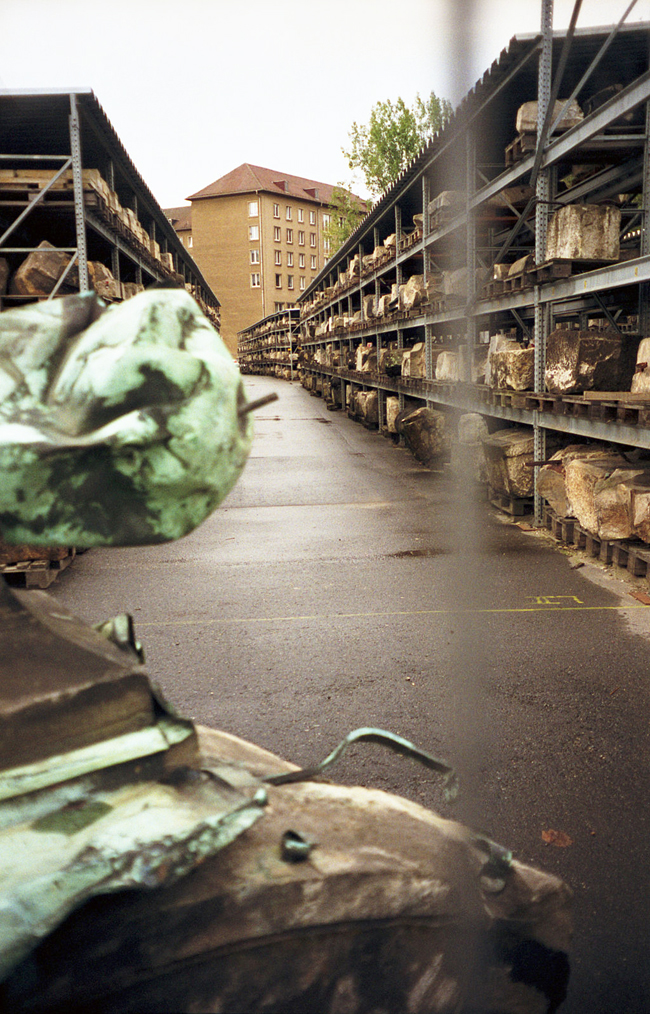 The restoration team began to gather evidence about what the church looked like. They relied on thousands of photographs, drawings and sketches, oral memories from residents, and old documents.

The work went on for years. For a long time, all that could be seen was scaffolding as the work continued inside. 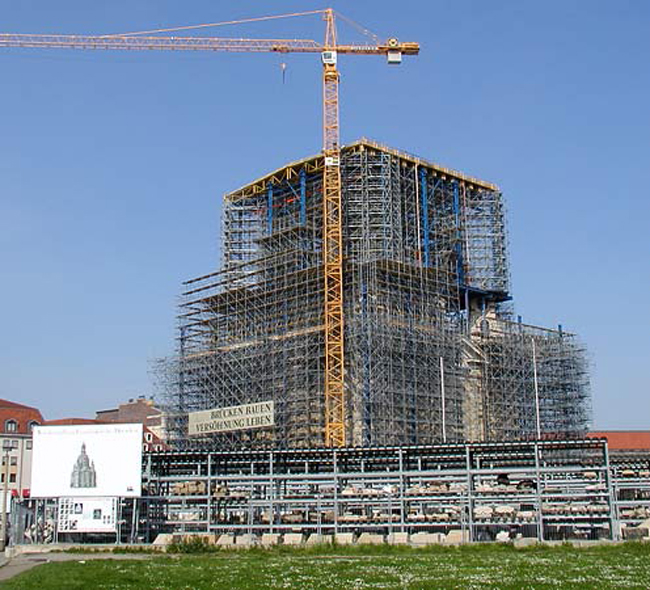 And beneath the scaffolding, the 96-foot dome atop the church gradually took shape. 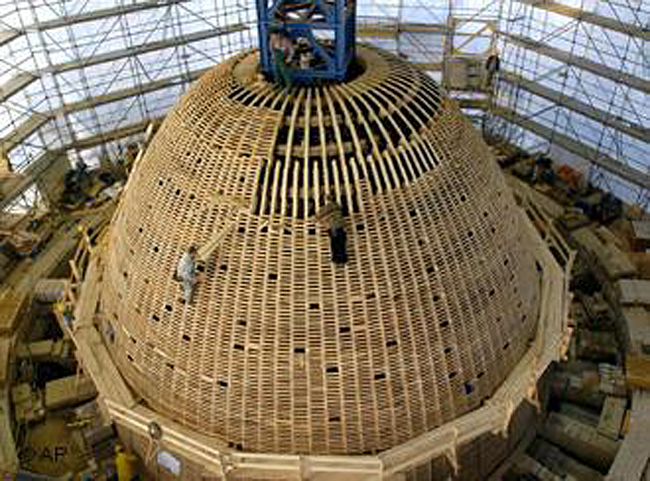 Finally, the church was revealed and the new dome was lowered into place, to the cheering of the crowds below.

For the first time since the last war, the completed dome graced Dresden’s skyline, just as it had in previous centuries. 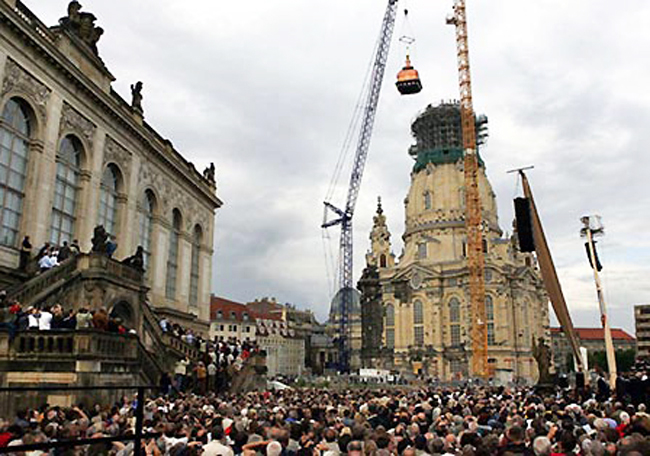 Of all the stones used in the original building, 8,500 were salvaged and 3,800 were pieced back into the structure. It must have been like putting together a gigantic, three-dimensional jigsaw puzzle!

Here’s a photo I took when we visited Dresden in 2012. The new stones are cream-coloured, while the black spots on the church walls are the original, fire-blackened stones.

The large black area on the left is the original part of the church that withstood the bombing, and remained upright. 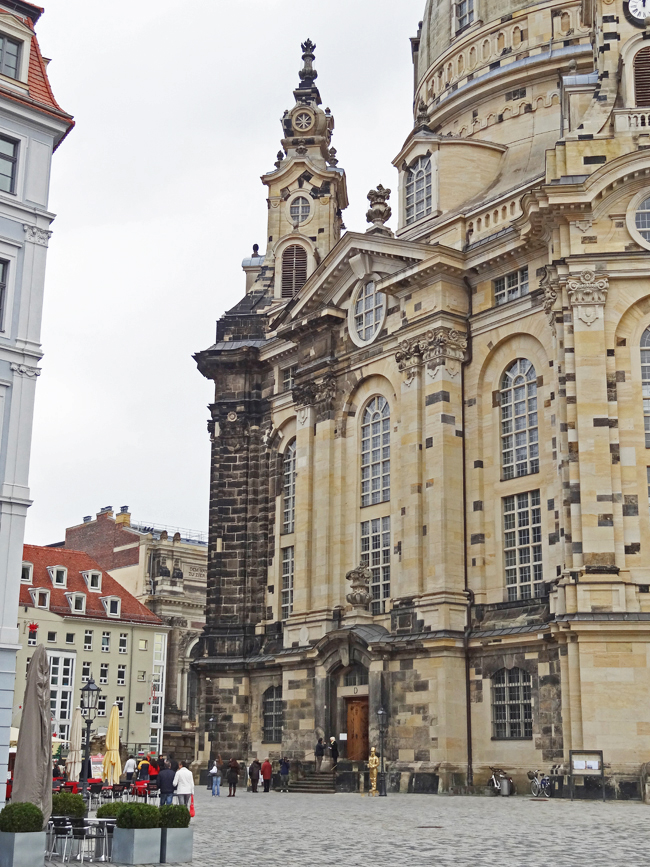 One big chunk wasn’t able to be used, so it was simply left outside the church as a memorial, so people could see the extent of the original damage. 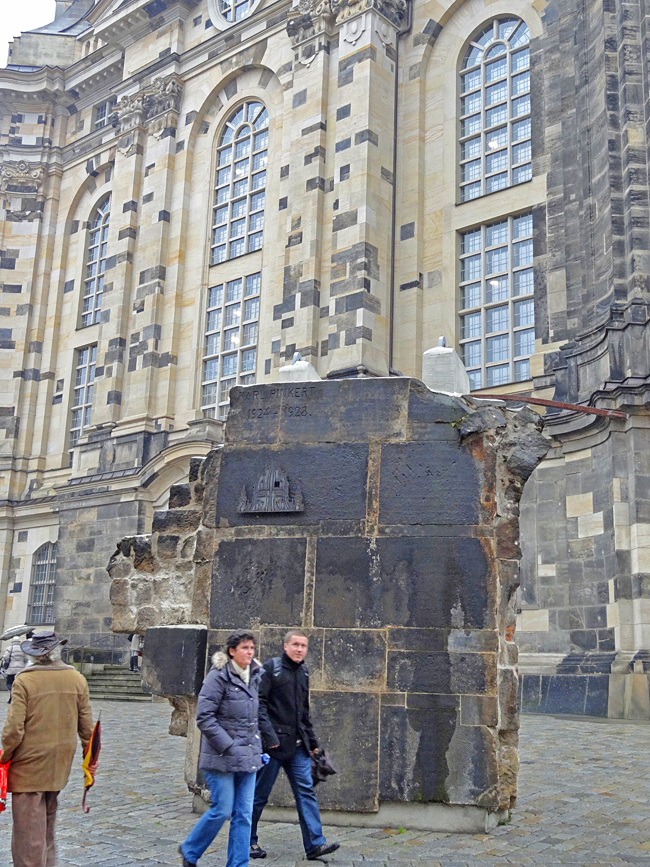 And what about the interior? It, too, was painstakingly restored with the help of old photographs (many of them wedding and christening photos contributed by the families of Dresden). It is lavishly decorated in pastel shades with ornate gold trim.

When we entered the sanctuary, people were speaking in hushed voices. There was a palpable sense of awe at the beauty of the church and the amazing feat of its recreation. 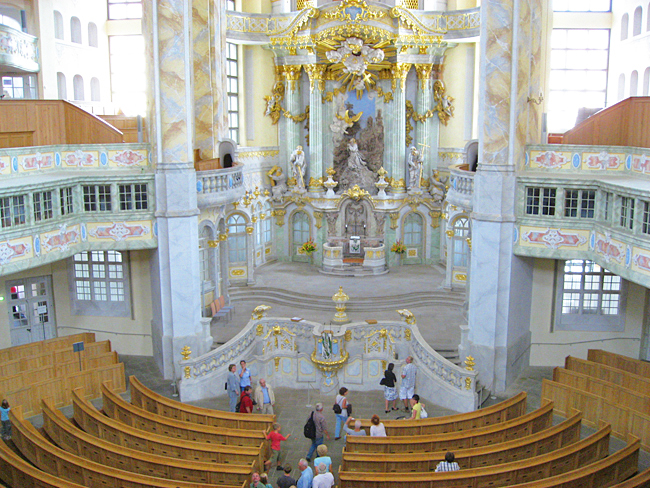 I found it especially meaningful that we were there on Remembrance Day in 2012. Many people simply sat silently in the pews, their eyes raised to the magnificent domed ceiling.

Some of them prayed. 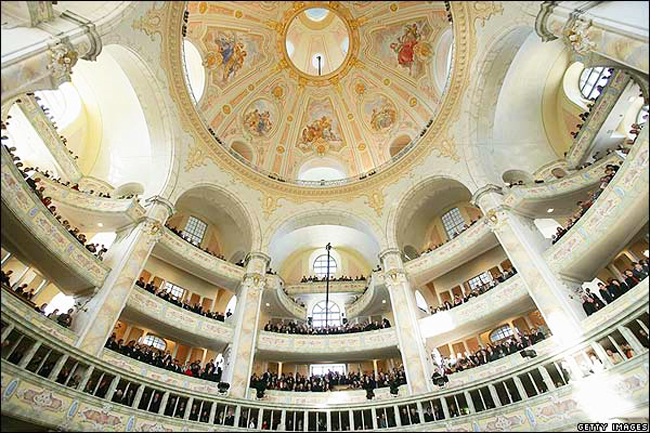 It took thirteen long years to rebuild the church. But it was finished in 2005, one year earlier than planned, and opened in time for Dresden to celebrate its 800th anniversary the following year.

The restoration cost 250 million dollars, donated from people all over the world. A British charity called the Dresden Trust – dedicated to healing the wounds of war — collected money from British donors to help.

The single largest individual donation came from a German-born American named Gunter Blobel. He won the Nobel prize for medicine in 1999 and donated the entire cash award – nearly $1 million – towards the restoration.

One of the most touching stories was that of Alan Smith, a British goldsmith from London. His father, Frank, was a member of one of the aircrews who took part in the bombing. Alan Smith created the golden cross that sits on the gold orb, at the very pinnacle of the church’s dome.

Before travelling to Dresden, the cross was exhibited for five years in churches across the United Kingdom. The cross was placed on the top of the dome a few days after the 60th commemoration of D-Day on June 22, 2004. 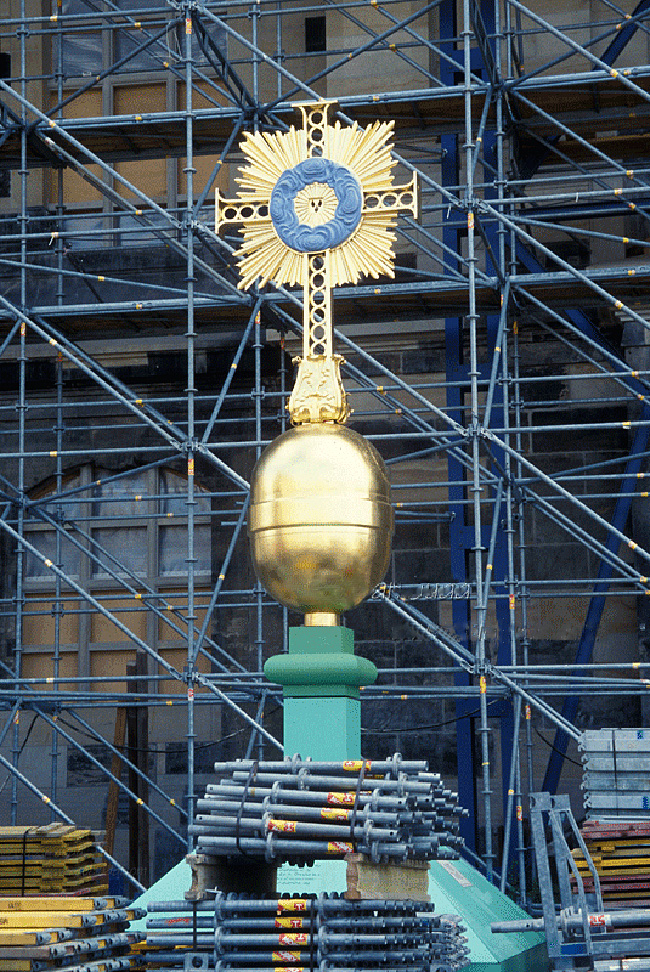 The original cross that once topped the dome, now twisted and charred by the firestorm, stands inside, beside the new altar. 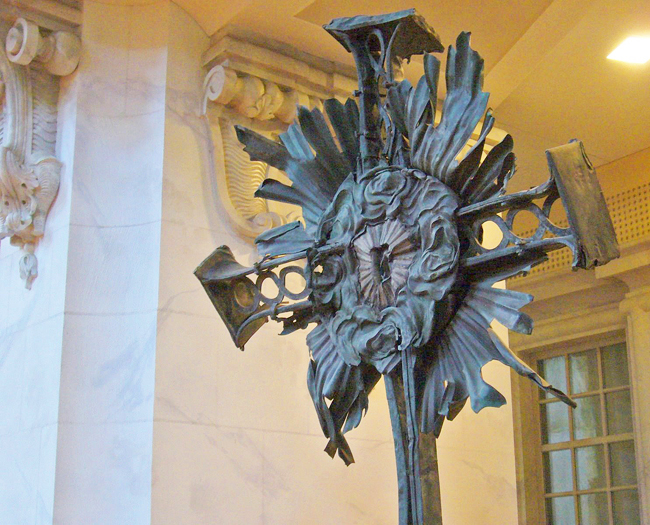 In the nearby Altmarkt Square, the historical city centre near the church where the bodies were gathered for cremation, is a somewhat obscure memorial to the victims of the Dresden bombing.

We had to search for it, and we were surprised that the memorial is so understated. It’s a simple inscription engraved along the entrance to an underground tube station. 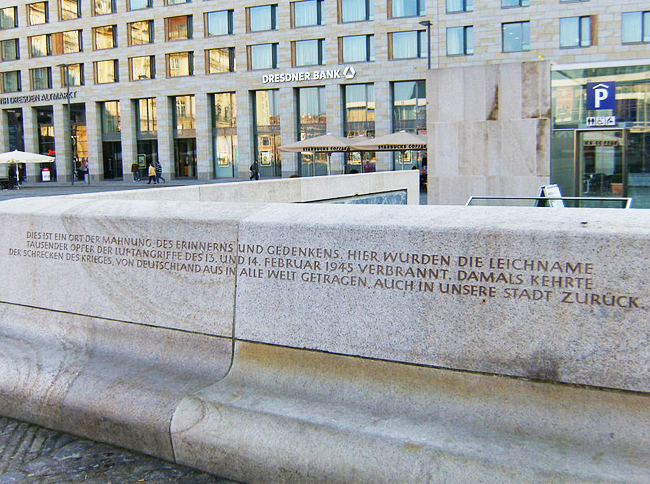 Each year, the square that once served as the resting place for so many bodies is filled with Dresden’s Christmas Market, bustling with life and activity. This market is the oldest one in Germany, dating back to 1434. 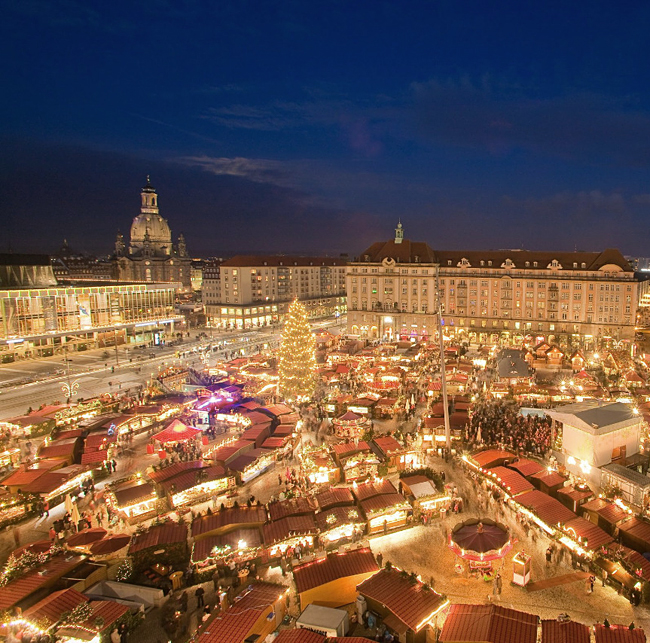 Here’s is what it looks like five hundred and eighty years later, on Christmas Eve in 2014.

You can see the dome of the Church of Our Lady in the background – a powerful reminder of our ability to heal old wounds, and renew our hope and faith in the future. 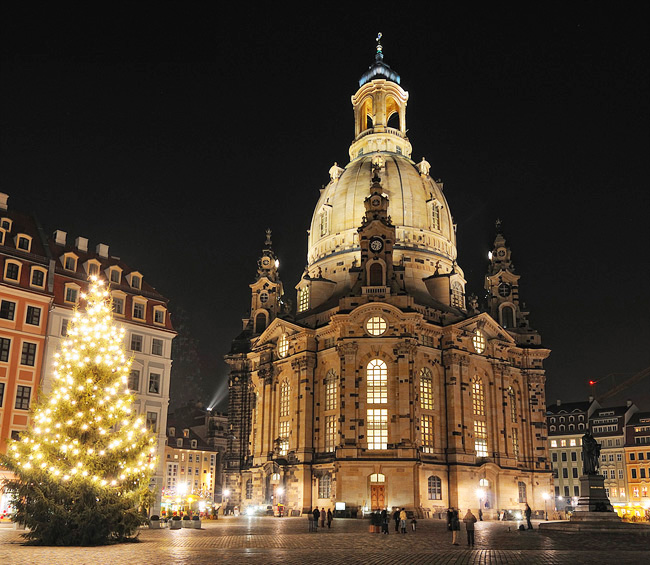