Aircraft crashes in wartime involving new recruits training under the British Commonwealth Air Training Plan were almost commonplace in Canada. Here’s one example. On September 8th, 1944, an RCAF aircraft was flying near the air training base at North Battleford, Saskatchewan when it went into a spin. Killed was Flight-Sergeant William Hashim, 24. His passenger was almost certainly the only woman in the RCAF to die in an air crash while on duty: Leading Aircraftwoman and photographer Muriel Almyra North, 21. 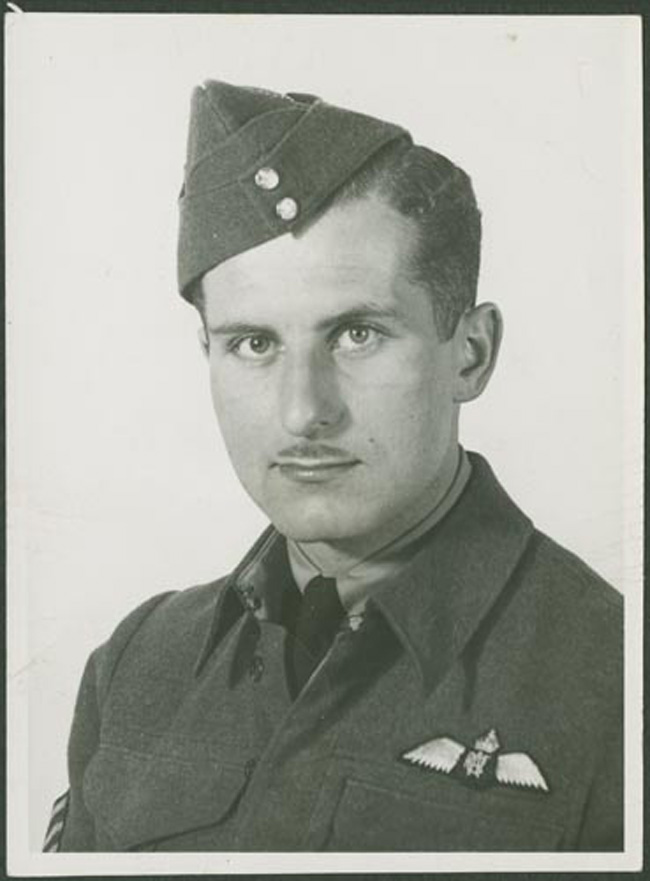 What happened to these poor young people? Did the aircraft malfunction? Was it pilot error? That seems unlikely. Hashim was a pilot instructor, a bright young guy who graduated from McGill University in 1940 as a chartered accountant. I found this clipping on McGill University’s memorial website. 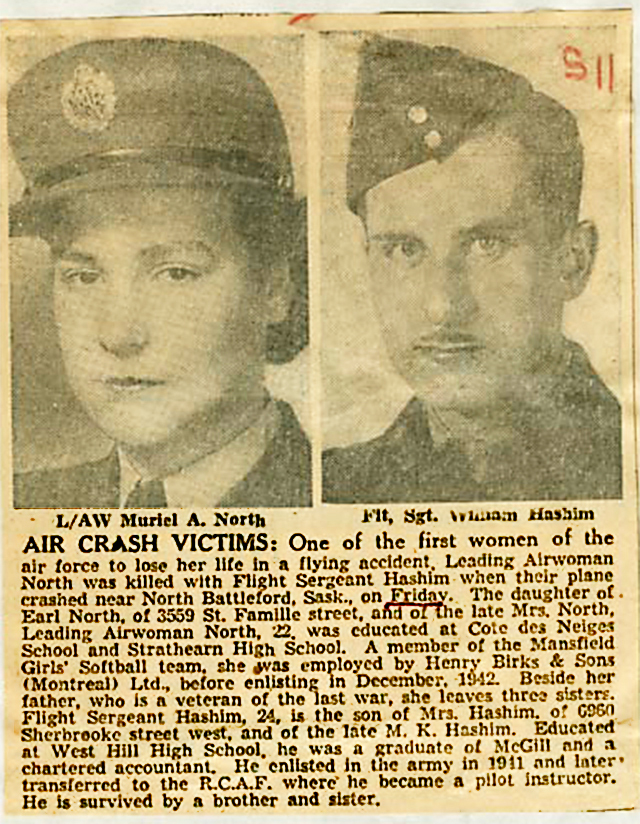 A blurry photograph from the North Battleford newspaper shows Muriel’s sombre funeral procession. And there is another memento of her in the local St. Paul’s Anglican Church: a wooden prayer stand dedicated to Muriel’s memory by her comrades in the RCAF Women’s Division. 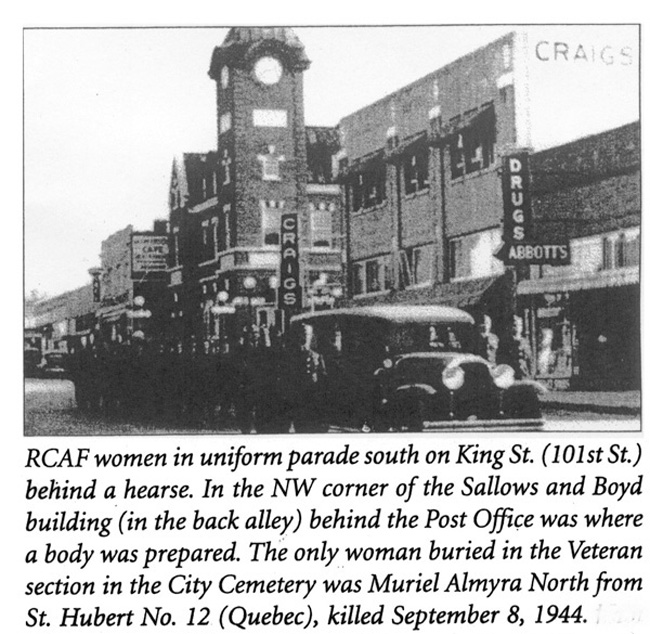 Although their funerals were held in North Battleford, both bodies were later shipped back to their home city of Montreal, where they lie in Mount Royal Cemetery. 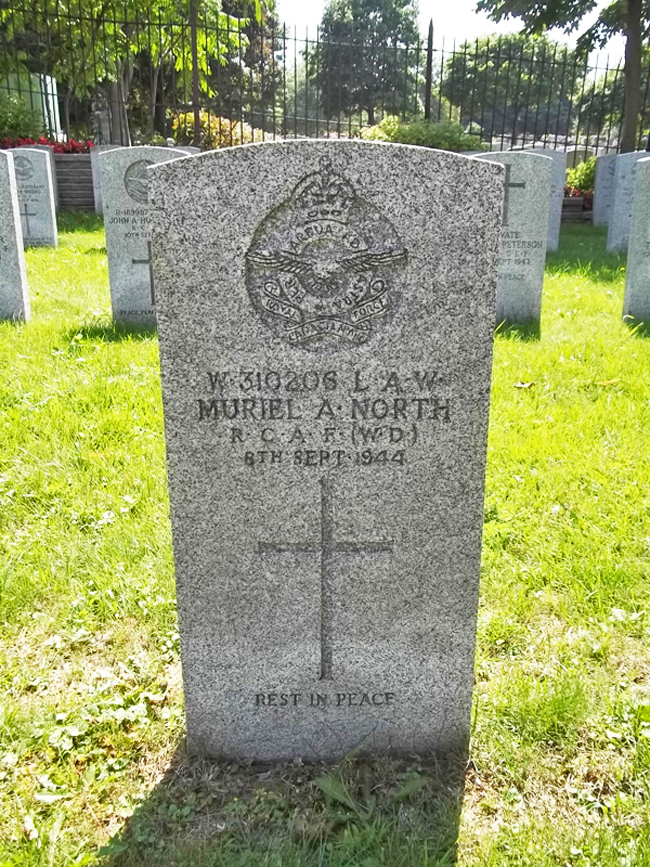 Hashim was just one of thousands of flyers, incuding trainees, graduated pilots and flying instructors, to be killed on home soil during World War Two.

In fact, the very first Canadian casualties of the war were RCAF Warrant Officer James E. Doan and Leading Aircraftman David Alexander Rennie, who disappeared on September 14, 1939 on a flight from Ottawa to Halifax. The wreckage of their aircraft was found nineteen years later near a lake in New Brunswick.

According to a report by Dr. Jean Martin in an article for the Canadian Military Journal, from 1942 to 1944 an average of five airmen died EVERY WEEK in Canada.

He compiled a total 2,367 RCAF deaths in Canada, compared with 14,643 who lost their lives overseas. (Notably, many men who died overseas were also the victims of accidents rather than enemy fire).

And those were just the Canadians. Many others from Commonwealth countries also died here, far away from home. Dr. Martin suggests that the total number of fatalities is closer to 3,000.

For their families, the dreaded telegram came as a double shock. Their son was still in Canada, far from the enemy. They were receiving happy letters from him, describing new sights and new friends.

Even worse, his death did not “count” for anything. He would not help to defeat the enemy. His short life had ended in a futile waste. And his sacrifice was often overlooked by the historians who focus on combat casualties.

Yet the deaths of these men was no less horrific, and caused no less suffering, than those of the men who died in battle.

To read one particularly sad story about a young airman from Tasmania, click here: Memories of Maxwell Cassidy. 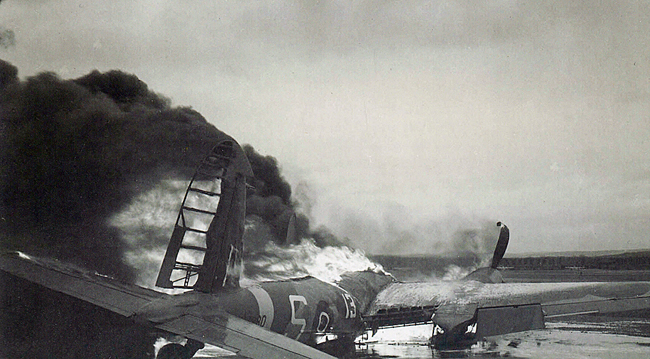 This photo of a crashed Oxford at the training base in Penhold, Alberta, taken by Australian Flying Officer Ray Morgan, can be found on the impressive website managed by the Vintage Wings of Canada. 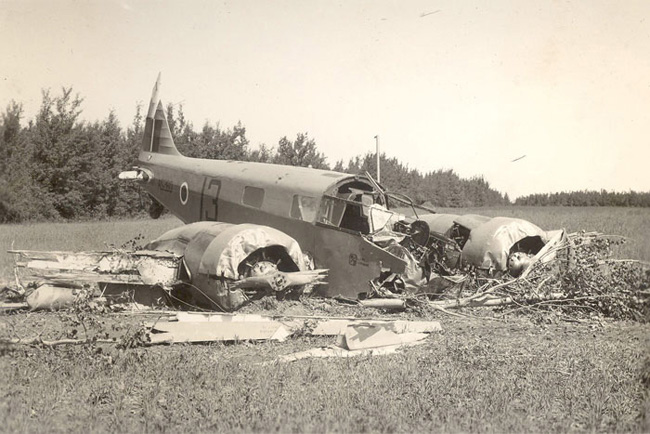 Here a Cessna Crane with two students aboard had an engine failure over the training base in Claresholm, Alberta. The aircraft dived straight into the barracks. Nine airmen were injured; mercifully, nobody was killed. This photo is taken from the excellent website managed by the Bomber Command Museum in Nanton, Alberta. 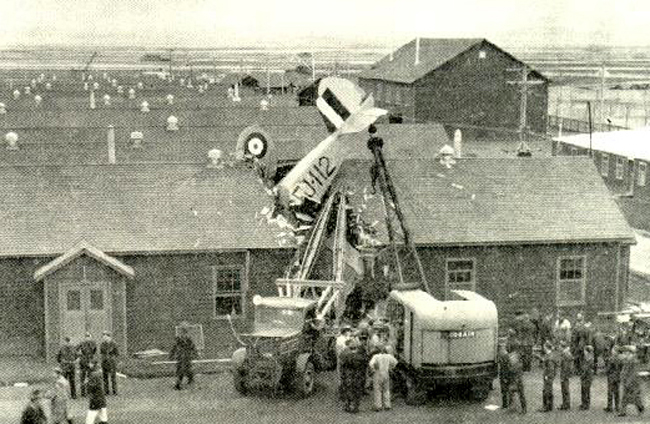 These two Harvards didn’t even get into the air. They collided on the ground in Summerside, Prince Edward Island on April 9, 1941. The photograph is from the Jack McNulty Collection belonging to the Canadian Harvard Aircraft Association. 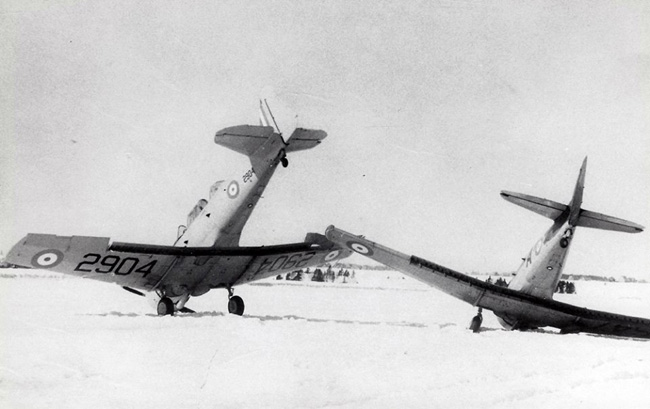 The causes of these crashes were varied: low-flying aerobatics, aircraft stalling, night training, air collisions, faulty equipment or instruments, and “other causes” which certainly included recklessness.

I’m sensitive to this issue because my own nineteen-year-old uncle Alan Light of Battleford, Saskatchewan died just weeks before receiving his wings. He was low-flying down the South Saskatchewan River when his Cessna hit the ferry cable at Hague. Although RCMP dragged the river, his body was never recovered. My mother June Light was a teenager, and recalls the anguish experienced by her family.

This photo shows my youngest uncle Colin Light on the left, my grandmother Vera Light in the centre, and my mother June Light in the front row. Directly behind her is my uncle Alan Light, along with several of the many trainees who came and went at the Light House during the war years. 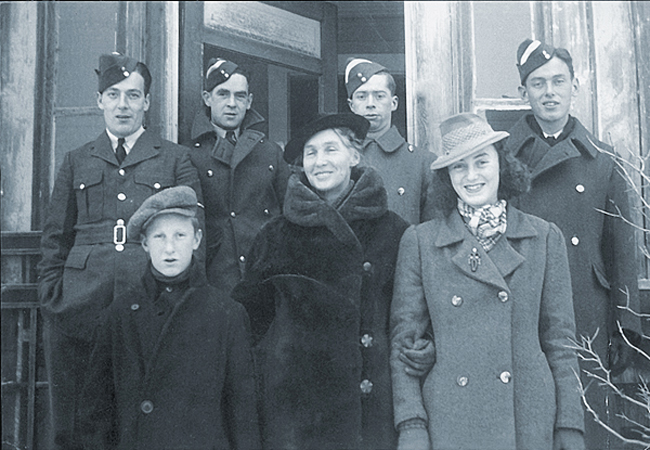 My mother was well aware that the flyers engaged in some hair-raising stunts. Here’s a personal anecdote from her:

“I remember four pilots who came to our house regularly. They spent their forty-eights with us, usually two at a time. We got to know the pilots best because they stayed in North Battleford the longest, because it took more time to qualify as a pilot.

“The skies were full of yellow training planes at that time, and the guys would often fly low over our house. They weren’t supposed to fly low over the town, for safety reasons, but our house was on the edge of Battleford and there was nothing but prairie beyond, so they got away with it.”

(Here’s a photo showing the typical bright yellow colour of training planes, which made them easily visible by air and from the ground). 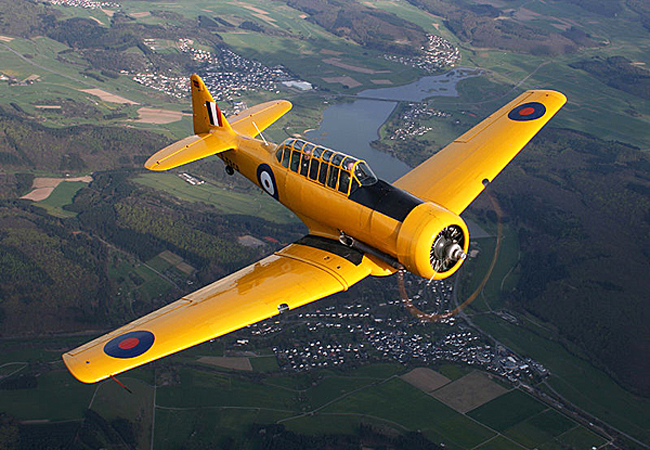 “Ron, to signal to us that it was him, used to cut his engine and then start it again. As soon as we heard that, my girlfriends and I would yell: “There’s Ron!” and run outside with dish towels and flap them in the air.

“My mother objected, but Ron told her that it wasn’t against the rules to cut his engine and restart, because they were told to practise doing that in case they had to restart after an emergency.

“Bob Brown found out about Ron’s little trick, so he decided that he would cut his engines twice and start up again. So when we heard the engines go out once, we knew it was Ron, and when they stopped and restarted twice, we knew it was Bob.

“Then the third guy, Arthur, a big tall blond guy, decided he would outdo everybody and cut his engine three times. That didn’t go over very big with mother. She would say: “Don’t you girls go out there and wave at them! Don’t encourage them!”

“Finally, Phil said he was going to do it four times. That was it for mother. The next time she saw them, she ordered them to quit. She said: “My heart almost stops while I’m waiting for your engine to start up again!”

“Mother actually did have heart trouble. In fact, she threatened to call the base and report them if they kept doing it. So that was the end of that.”

Whatever the reasons for the accident rate in Canada, it caused a tremendous loss of life and heartbreak for thousands of families. A very moving dedication can be found on a memorial at the Claresholm Cemetery in Alberta, marking the final resting place for airmen of the Commonwealth.

“Some did not live to fulfill their purpose.

These brave souls stayed in Claresholm.

The bonds of Empire lie within these men

As they sleep throughout eternity.

The lives of these men were given our country

For family and friends, as surely as those 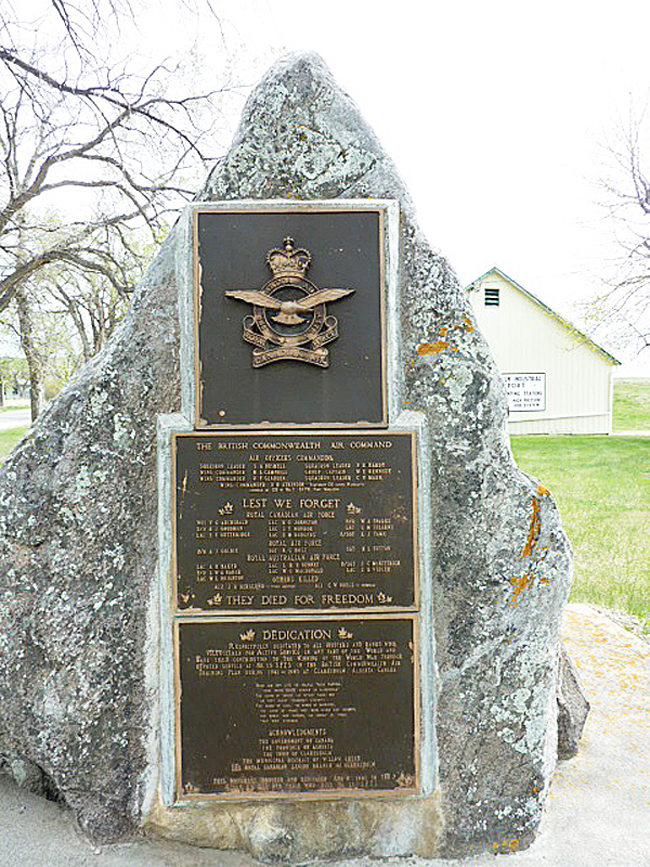 The Star Weekly was a Canadian newsmagazine published by the Toronto Star. During the Second World War, a beautiful colour illustration appeared on the cover each week with a wartime theme. Here is an image of a Canadian airman dated June 14, 1941. To see my collection of covers, click here: Star Weekly At War. 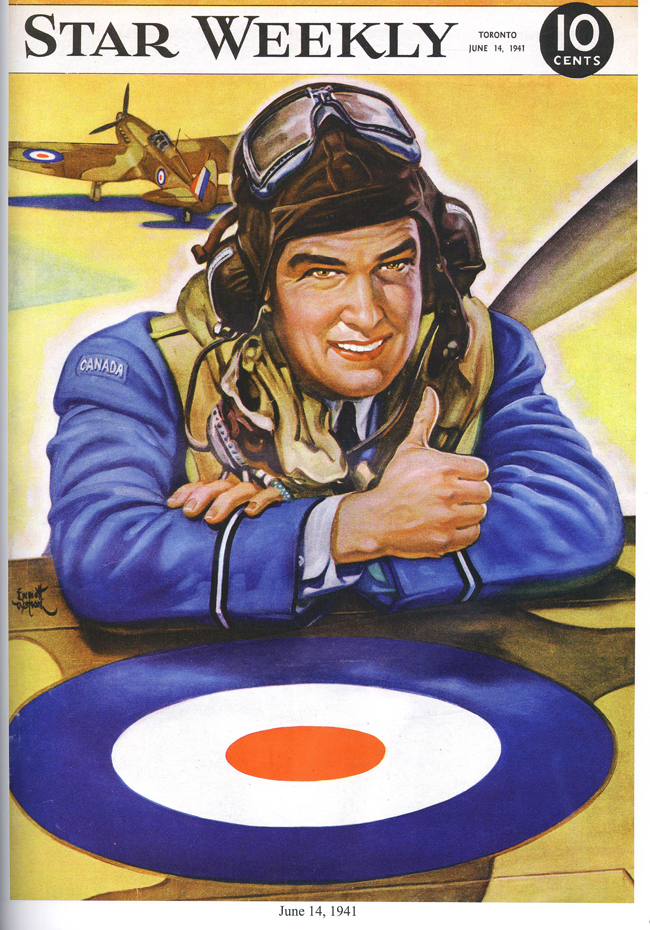