When I began to research my wartime novel about an aerial photo interpreter in the Second World War, the woman who made the most impact – not only on my book, but on the world we live in today – was the brilliant, beautiful Constance Babington Smith.

(My wartime novel Bird’s Eye View is fact-based fiction, the story of a Canadian woman who works at RAF Medmenham as a photo interpreter. To read one thrilling chapter, click here: Bird’s Eye View Excerpt.) 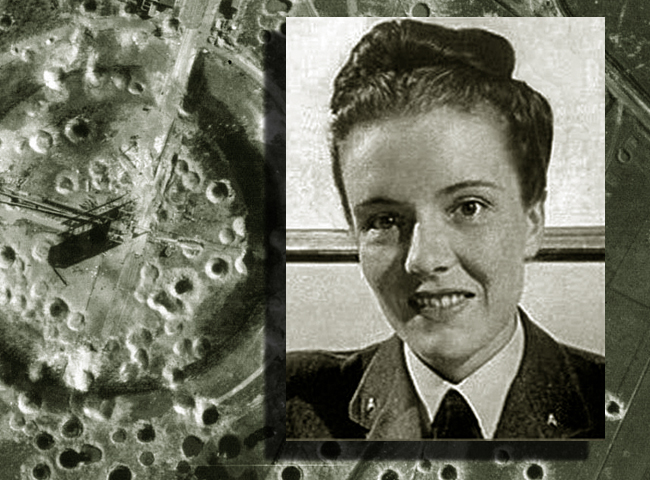 Constance is well-known in some circles, although most people have never heard of her. But she is credited with finding, on an aerial photograph, the V-1 flying bomb.

Her discovery set back the Nazi plans to annihilate Britain – followed by North America — with the first jet-propelled weapon of mass destruction in history.

Here’s a short history of her fascinating life.

Constance was born on October 15, 1912 into the British upper class, one of nine children of Sir Henry Babington Smith and his wife Lady Elizabeth. (One of her ancestors was Lord Elgin, who “acquired” – some would say stole — the Parthenon marbles.)

Constance was brought up in an English country home and educated by governesses and tutors (I’m picturing Downton Abbey here) and even sent to live with a French family at Versailles.

During the 1930s, she led a busy social life in London and worked for Vogue magazine, and a fashionable milliner. Perhaps that explains the hat with an aircraft ornament!

The photograph below was taken at an Aerodrome Garden Party on May 8, 1938. The caption reads: “A fashionably dressed crowd saw some of Britain’s latest war planes side by side with fast civil liners and pioneer machines, at the Royal Aeronautical Society’s garden party on the Great West Aerodrome at Hammondsworth, Middlesex. A unique and appropriate hat fashion, with aeroplane ornament, was worn by Miss Constance Babington-Smith.” 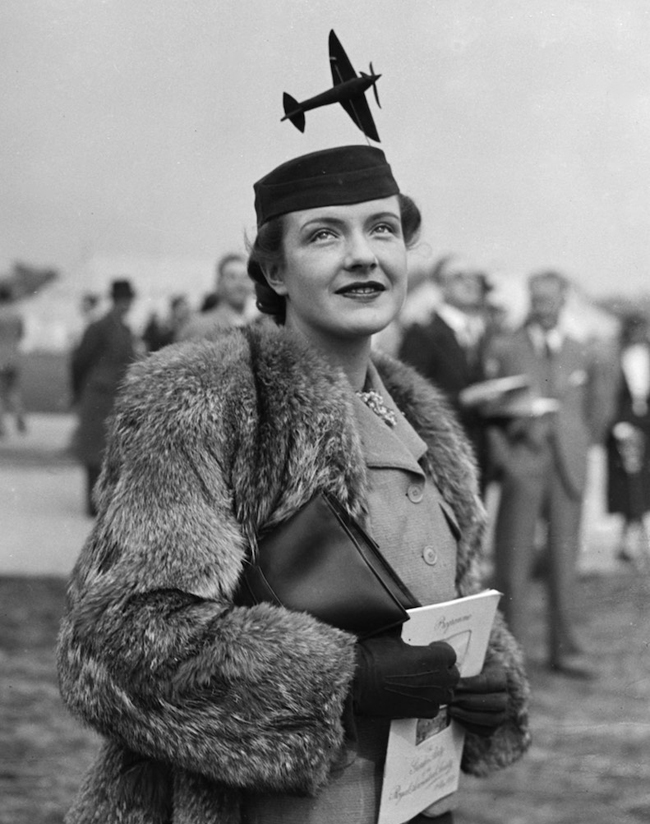 The stage was set for a life of idle luxury. But Constance had far too much intelligence and ambition for that.

Drawn by the aviation craze of the 1930s, she began writing articles in Aeroplane magazine. And when war broke out in 1939, she hastened to join the Women’s Auxiliary Air Force.

It didn’t take long before she was promoted to Section Officer, and asked to set up a new aircraft interpretation section for the RAF’s photographic reconnaissance unit.

In 1941 she moved with the unit to Danesfield, a mansion on the Thames River that during the war became RAF Medmenham. To read more, click: Medmenham: Where the Magic Happened. (It is so posh that George Clooney had his wedding reception there!) 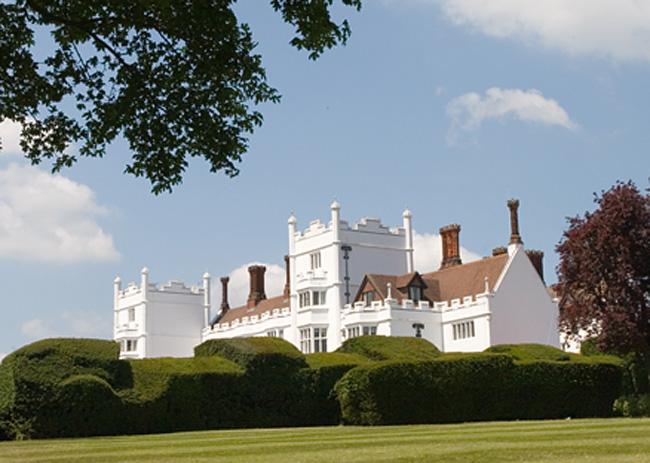 Her brother Bernard, a mathematician, was already working there, interpreting night photographs.

No problem, she explained, was regarded as too difficult to solve; the interpreters set out to detect every secret a photograph might contain. 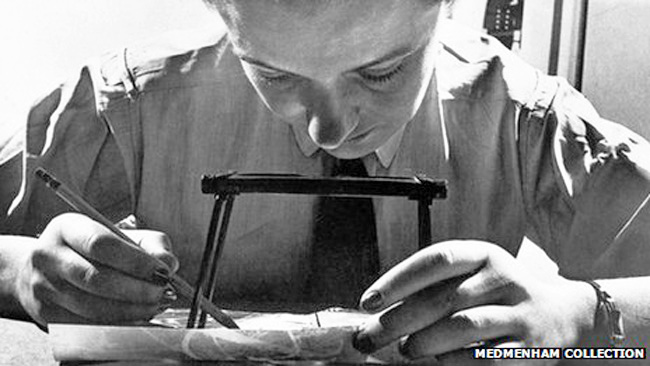 The interpreters were a clever bunch. Constance worked with geologists, geographers, archaeologists, mathematicians, explorers, botanists, map-makers and a host of others who interpreted huge numbers of photographs. (For example, during the preparations for the Normandy landings, seven million prints a month were sent for interpretation!)

She even appeared, very briefly and without credit, in a 1941 RAF film called Target For Tonight about a bombing raid. This is a still photo taken from the documentary. 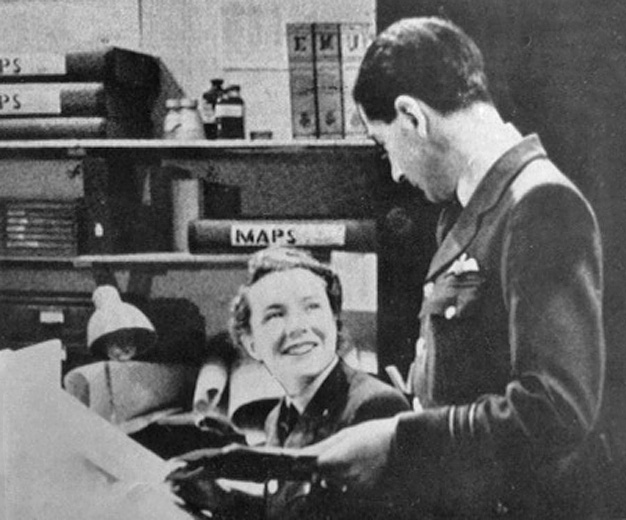 By 1943, she was heading a department of eleven, analyzing photographs taken by high-altitude reconnaissance Mosquitoes and Spitfires, searching for developments in German secret technology.

Early that year, their attention was drawn to a place called Peenemünde, the site of a research station on the northern coast of Germany. To read more about this place, click: My Visit to Peenemunde.

Aerial reconnaissance had indicated some unusual activity there, and the interpreters at Medmenham were on high alert. But the photographs were baffling, and they didn’t even know what they were looking for.

One of Constance’s orders was to search for “anything queer.”

The interpreters still didn’t know exactly what the Germans were up to until November 1943, when a reconnaissance aircraft returned with a photograph that caused a sensation.

As Constance studied it through her stereoscope, she identified a launching ramp holding a tiny cruciform shape on rails, looking like a stunted aircraft.

It was a V-1 flying bomb being prepared for a test flight.

Now, you may think this was a simple discovery. In fact, photo interpretation was a very intense business involving many thousands of hours of study and experience, not to mention a sort of sixth sense.

Here is the actual photograph as seen by Constance. Even with the helpful little white arrow pointing to the V-1 launching ramp bearing a flying bomb, nobody except the most skilled and dedicated interpreter could have found it. 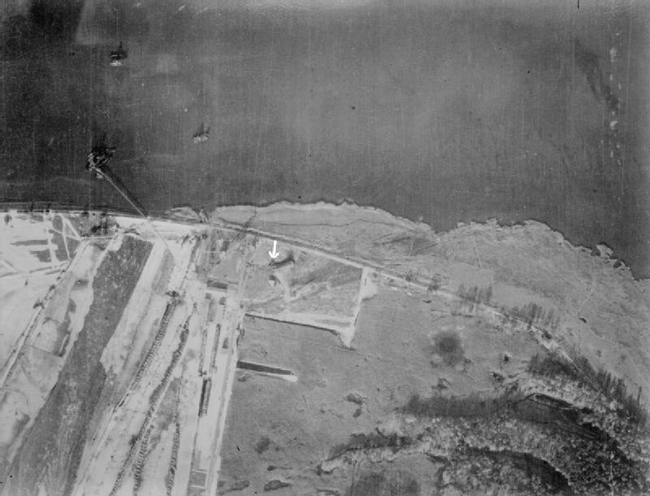 And this is what the deadly missile looks like at close quarters. The launching ramps were, of course, pointed straight towards London. 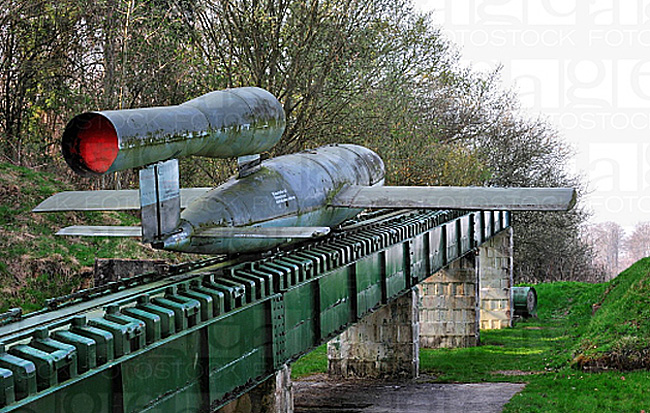 Constance’s discovery, together with an exhaustive examination of thousands of photographs of possible launch sites, proved that a flying bomb offensive was in the works.

The bombing of the launch sites had urgent priority, under the codename “Operation Crossbow.” Constance provided photographic material to assist targeting by Bomber Command, and by the end of 1943 Allied air forces had flattened all the launch sites detected in France.

But Hitler didn’t give up that easily. He was convinced that his weapons, known in German as “Vergeltungswaffen” or “Revenge” weapons, V-weapons for short, would win the war.

Secretly, the Germans continued to build more camouflaged launch sites, and shortly after D-Day in June 1944, Hitler unleashed his V-1 flying bomb assault on London. The V-2 rockets began to fall on London in September.

However, the V-weapon offensive never reached its full potential, thanks to the efforts of many people including my much-admired Constance Babington Smith.

In a man’s world, she’s one of the women who give women a good name. And she did so with grace and elegance.

Frank Whittle, the inventor of the jet engine, toured RAF Medmenham and was quite enamoured by this unusual officer. Constance learned later that Whittle was subjected to much teasing about her, especially when he asked about the name of the perfume she always wore — Guerlain’s L’Heure Bleue. 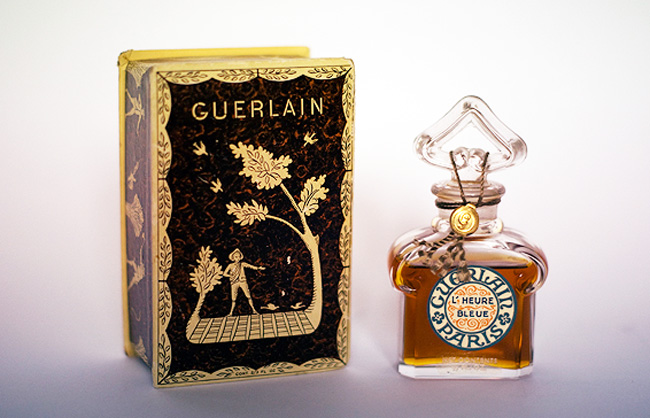 She wore the fragrance, she said, to counteract the masculinity of her stark blue air force uniform.

Now I want to dab some of this French perfume (translation “The Blue Hour”) behind my ears, just because it will remind me of Constance. Here’s a photo of her in her section room, holding a slide rule. 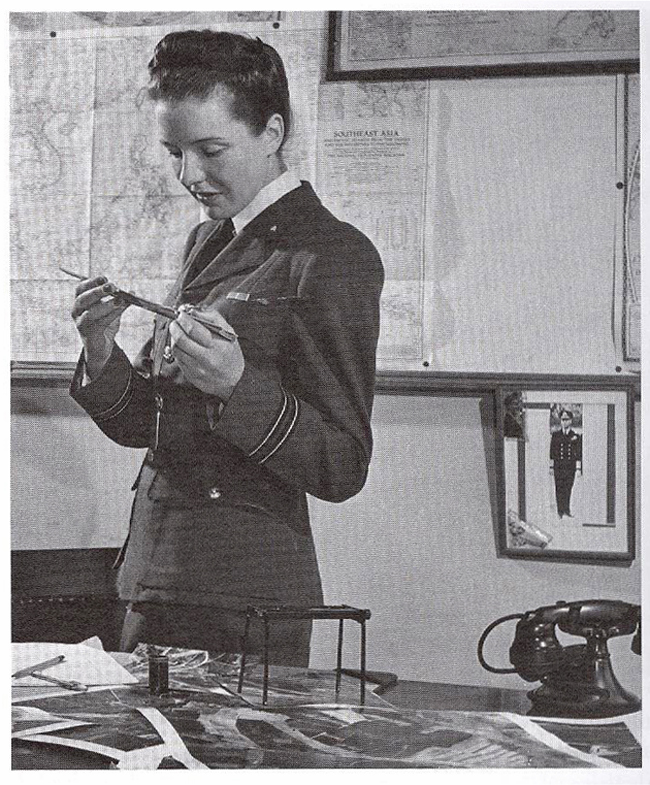 This photo was taken from the book Women of Intelligence, by Christine Halsall, published in 2012. It’s an excellent non-fiction account of the hundreds of women interpreters who worked at RAF Medmenham. 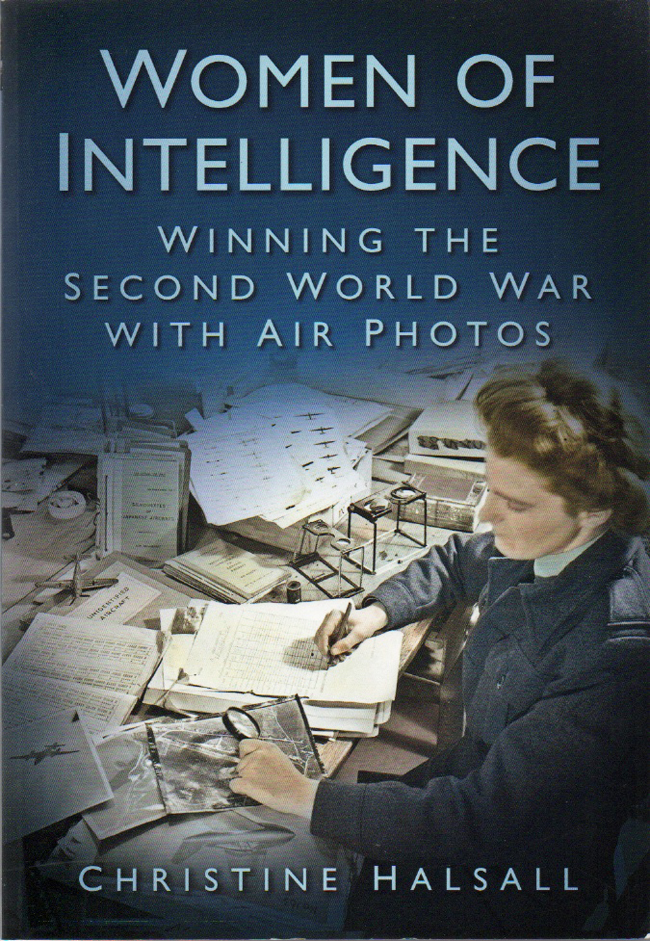 And here’s another photo of Constance, taken around the same time. 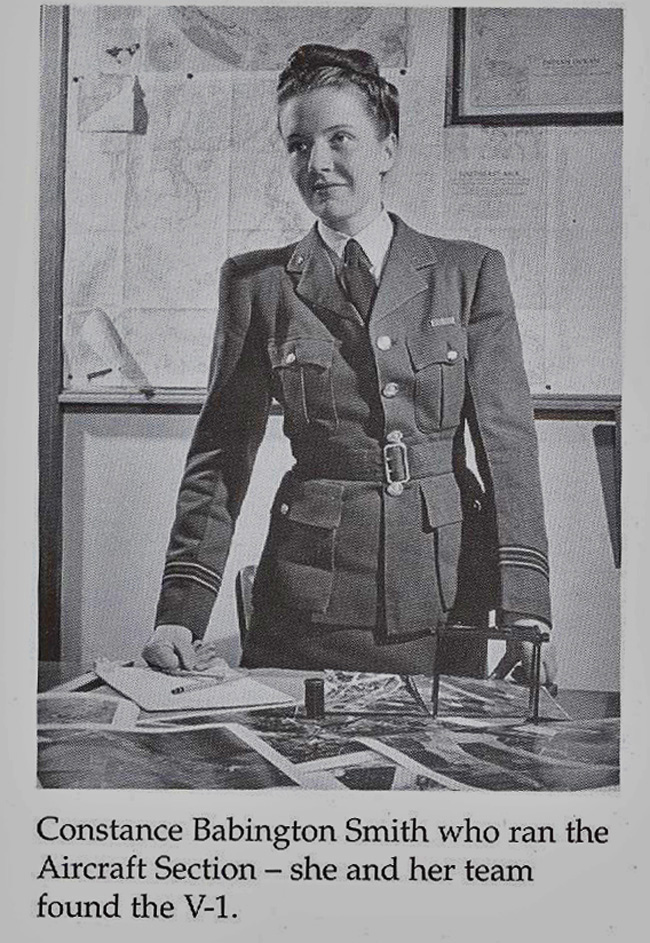 This photo was taken from the book Spies in the Sky, by Taylor Downing, published in 2011. It’s an overview of the Allied aerial reconnaissance during the war, both in the air and on the ground. (Both authors attribute many of their photos to The Medmenham Collection). 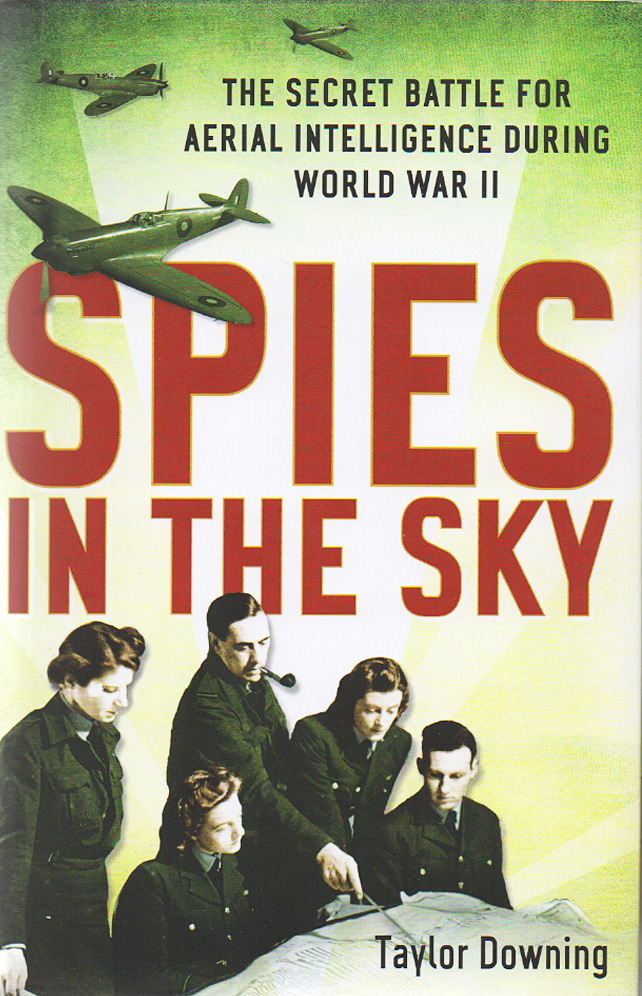 After her discovery, Constance was mentioned in dispatches and made an MBE (Most Excellent Order of the British Empire) in Britain.

But the war dragged on. Constance was transferred to the United States in 1945, where she performed photo interpretation during the final stage of the Pacific war. There she was awarded the U.S. Legion of Merit.

I found this comic book hailing her as a heroine of the day, The Girl Who Saved New York. It’s not even much of an exaggeration, since the V-weapons were destined for New York and other North American targets. 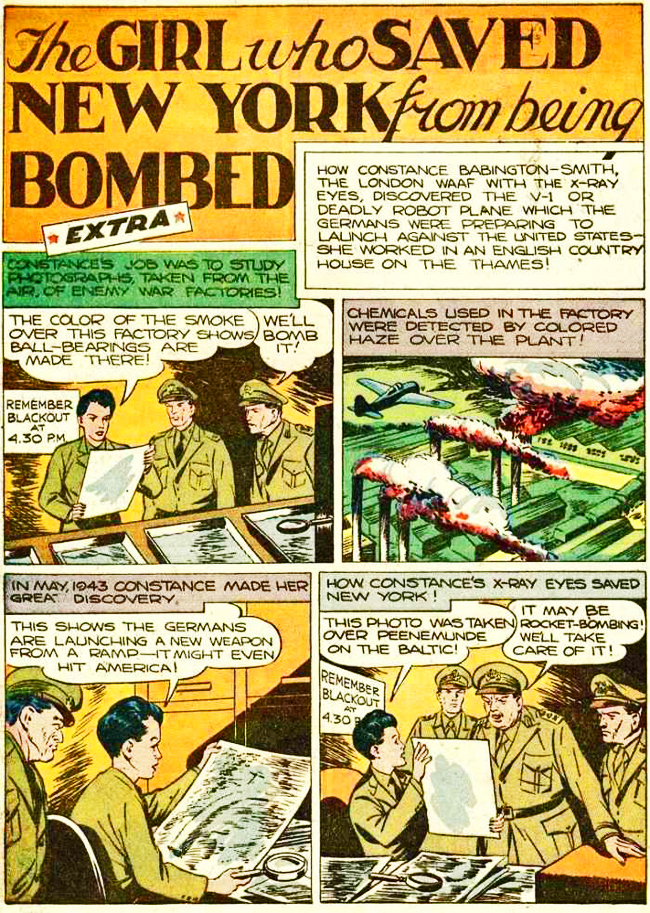 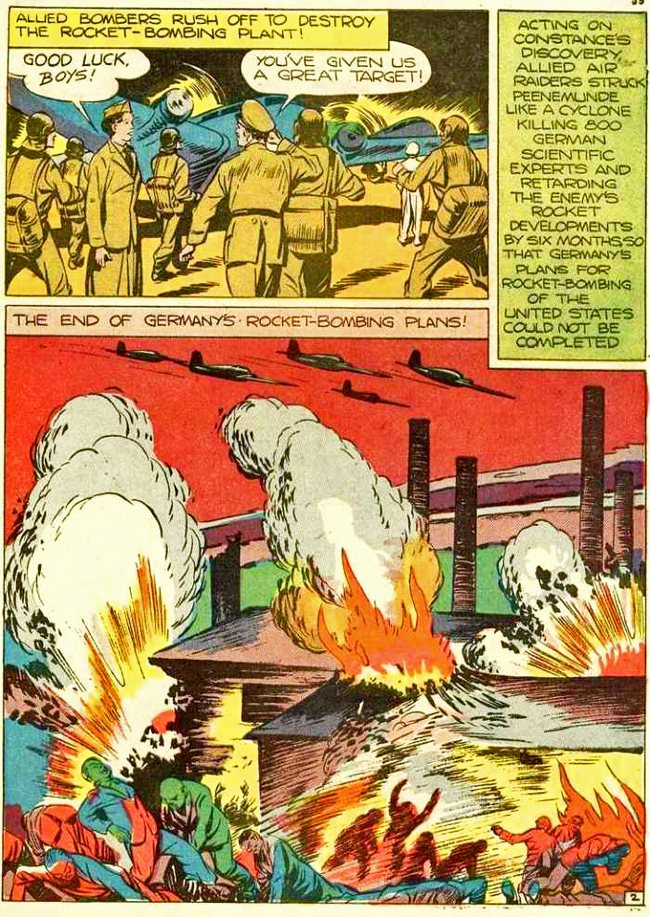 But by 1965, she barely rated a minor role in this movie called Operation Crossbow. The film’s heroes (and this is pure fiction) were the double agents played by George Peppard and Sophia Loren, who went behind enemy lines to destroy the V-weapon launching sites. 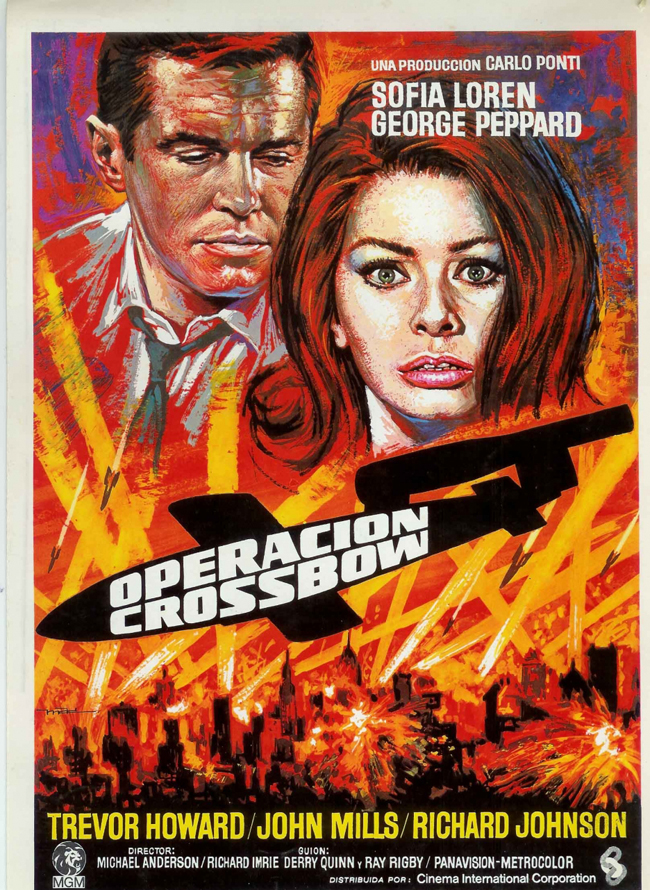 Constance stayed in America for several years, working as a researcher on Life magazine, and returned to England to settle in Cambridge.

A prolific writing career followed, beginning with her own account of life at Medmenham called Evidence In Camera. I’m fortunate enough to own a copy.

After Evidence in Camera, she went on to research and write a book on test flying, and then five biographies, including that of the flyer Amy Johnson.

She never married, but in her later years she fell in love with Greece, travelling there frequently and joining the Greek Orthodox Church at the age of 60.

Never forgetting the part played by the Mosquito reconnaissance aircraft — and the debt owed to the men who made those dangerous, unarmed flights to take the photographs — she was a founder of the Mosquito Memorial Appeal Fund, which preserved the prototype Mosquito at Salisbury Hall, St. Albans.

Constance Babington Smith, who remained modest about her own part in the war, died in 2000 at the age of 87. 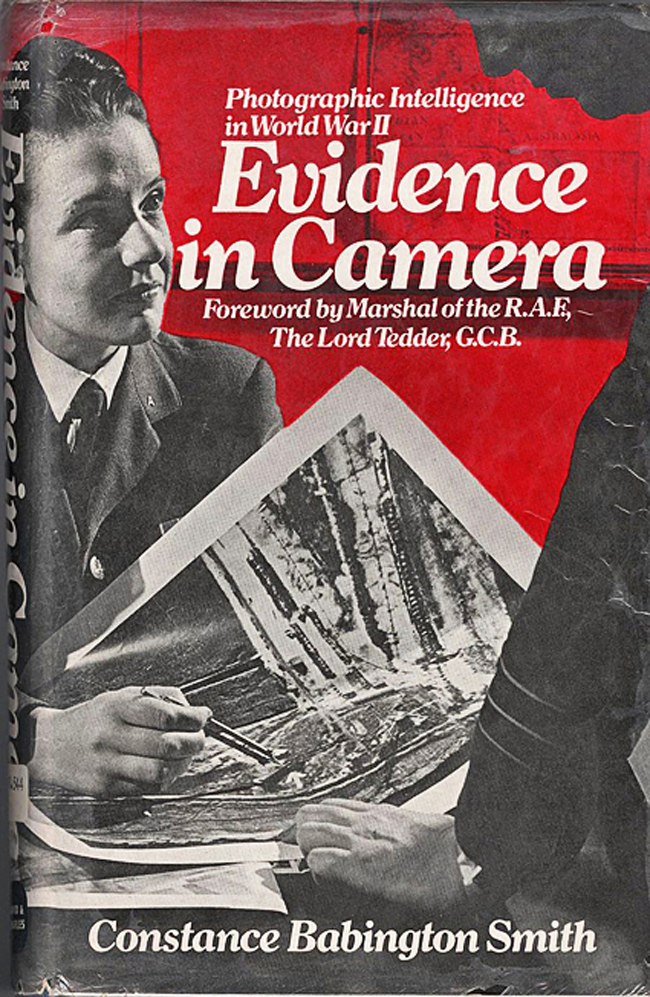