My husband was a twelve-year-old boy living in a peaceful suburb when the Berlin Wall went up almost overnight, just two blocks from his home. Thankfully, his family lived on the western side. Here are his memories of growing up in the shadow of the wall. 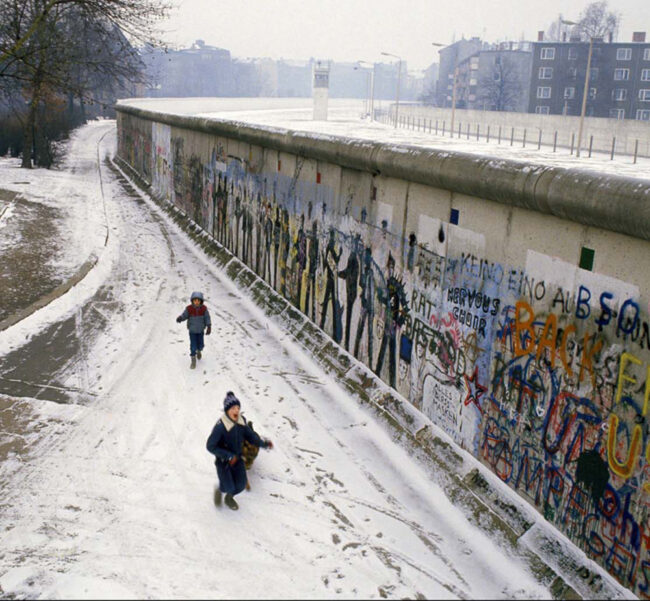 When people find out that my husband grew up in Berlin, they often ask him about the famed Wall. His memories are especially meaningful in light of this new war in Europe.

My husband Heinz Drews was born four years after the war ended. His mother Gerda was only a child herself when the Second World War began. During the war Berlin was bombed into pieces and she spent years living in a bomb shelter. When the Russians occupied Berlin in 1945, her father disappeared, and she was subjected to horrors that she can’t speak about to this day. Read her story here: The Battle of Berlin.

My husband’s father Kurt Drews was a teenager in Berlin when war began. After finishing school he worked at a German weapons research station called Peenemunde, and later was drafted into the air force and flew a fighter plane until the war ended. He spent two gruelling years in a Russian prison camp. Read his story here: My Visit to Peenemunde.

Kurt met Gerda after the war, and they married on December 1, 1947, her twentieth birthday. They settled down in the neighbourhood called Reinickendorf where she had grown up, and Kurt went to work for the Berlin Transit Authority. They had two adorable little boys – Heinz, born in 1949, and Jurgen, born in 1953. Here’s a photo of my husband with his schuletute, a paper cone filled with candy that all German kids receive on their first day of school. 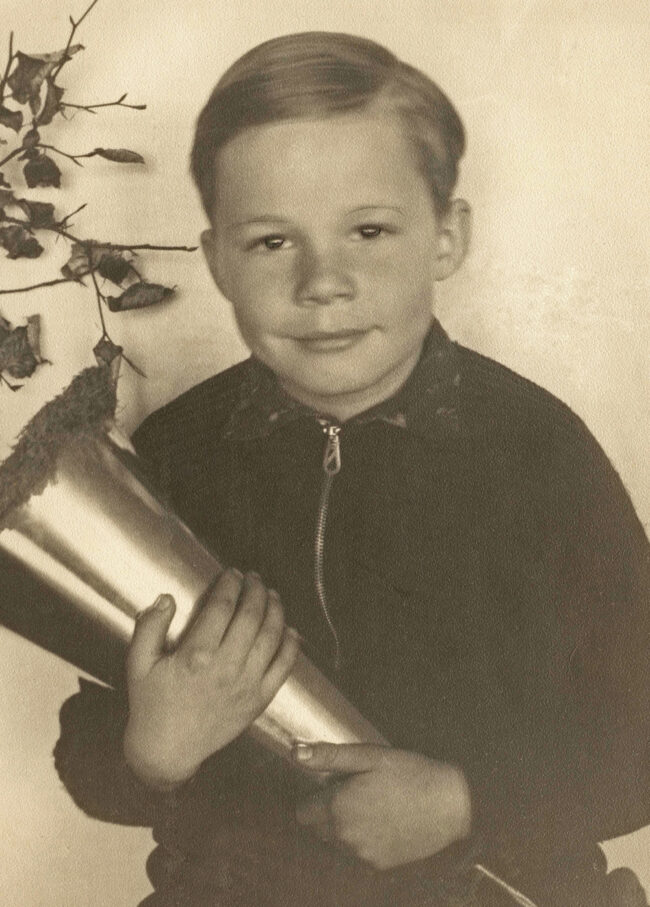 The young family lived in a pretty cottage with a big garden and fruit trees, and the boys played along the nearby canal. Life was normal . . . or as normal as it could be under the circumstances.

After the war ended in 1945, Germany was divided into two parts by the victors. East Germany was handed off to the Russians, who created a totalitarian, communist regime. West Germany thrived as a free and democratic country. The city of Berlin was an orphan, an island floating far inside the borders of East Germany. 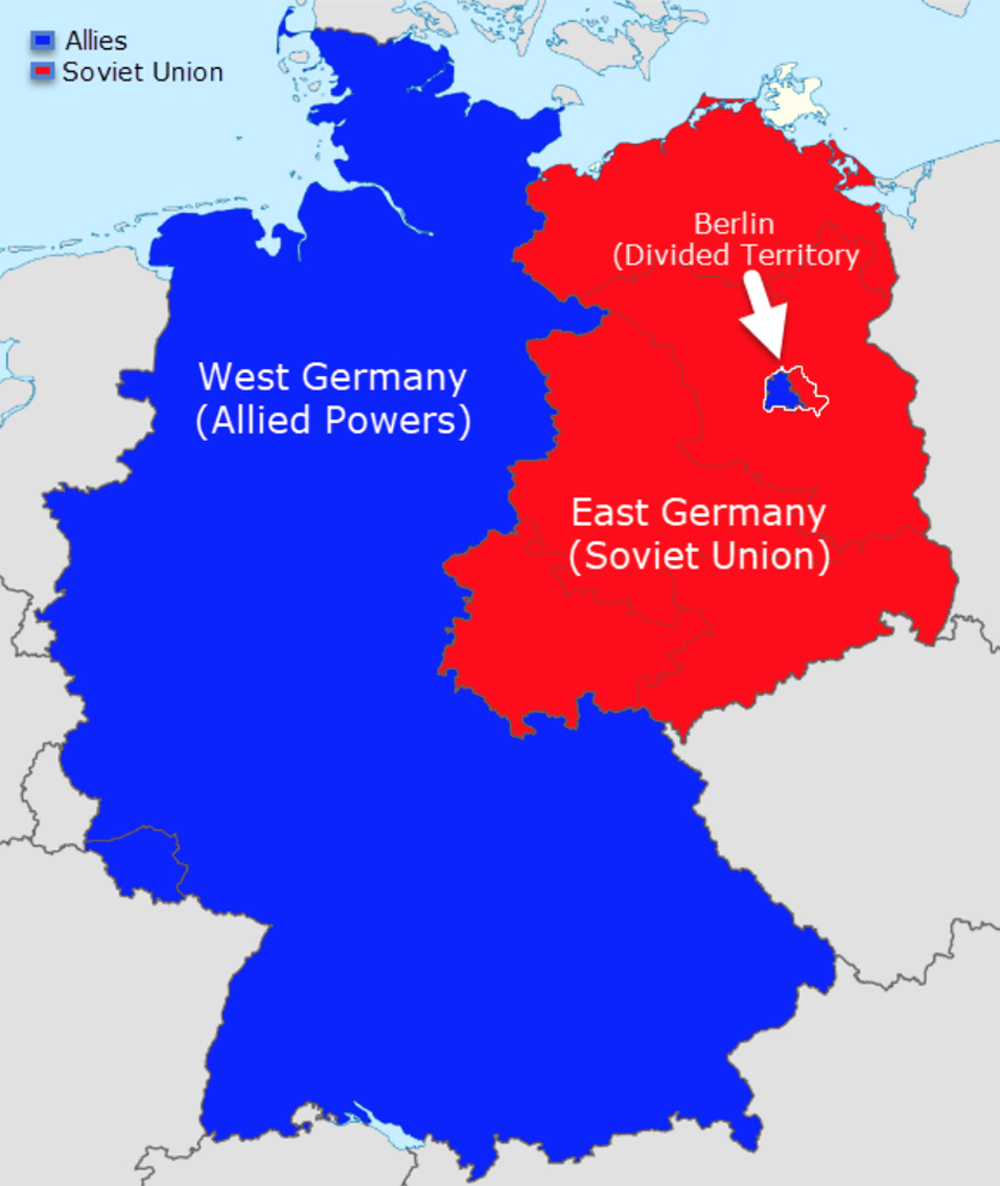 Berlin was carved into four sectors, each ruled by a different Allied conquerer: half went to Russia, and the other half was divided among Britain, the United States, and France. My husband’s family lived in northern Berlin, in the French sector, showing as the blue portion of the map, just two blocks away from the Russian sector. 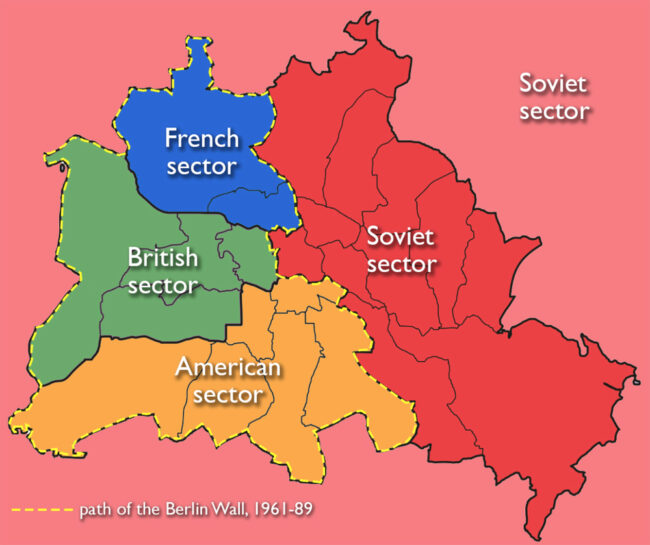 Surrounded by East Germany on all sides, West Berliners were allowed to leave the city but they had to pass through East German border checkpoints, often enduring long delays while their vehicles were searched.

However, everyone in Berlin was allowed to move freely inside the city and many people had friends and family members and jobs in other sectors.

This photo shows a sign in all four languages, identifying the American boundary. 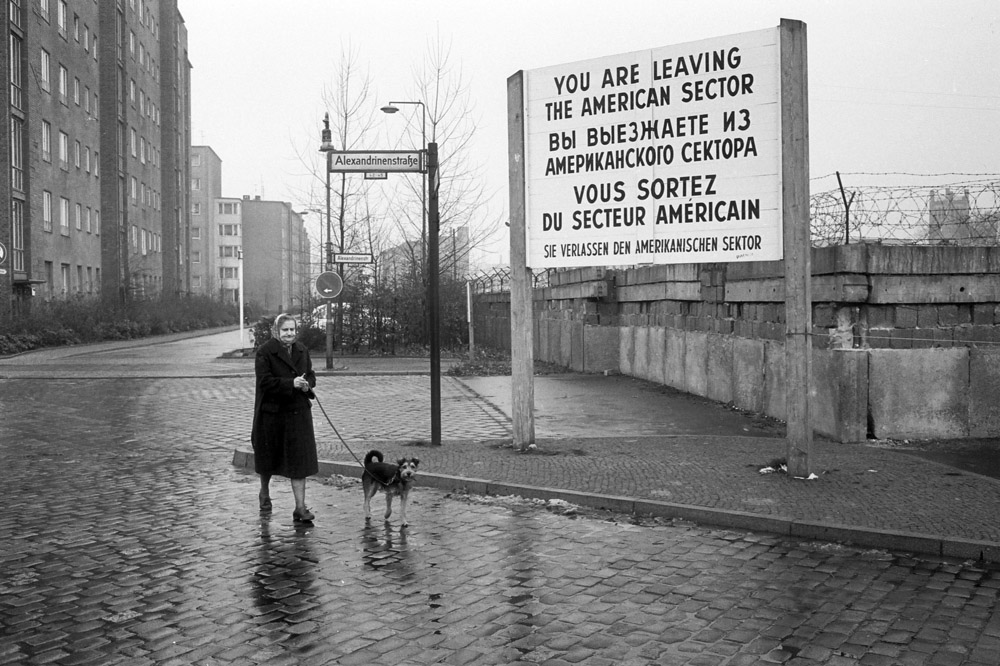 In 1961, the Drews family took a summer vacation. They loaded their Volkswagon Beetle with camping gear, drove through East Germany without stopping, and enjoyed their holiday at an Austrian campground. Happy and sunburned, they drove home late on August 12, 1961.

Heinz recalls: “I remember sitting in the back seat and hearing my parents speak in alarmed voices about the number of Russian military vehicles and troop carriers on the autobahn that night, all heading toward Berlin.”

The next morning they were awakened by someone banging on the door. A neighbour warned them that something bad was happening. They turned on the radio to hear that the Russians, angry about the flood of Berliners moving from the Russian sector into the other three sectors, had vowed to stop the outflow by building an impenetrable wall.

According to Heinz: “Our family hurried down our street to the border, along with everyone else in the neighbourhood, and saw a frightening sight: French soldiers in full gear on our side and Russian soldiers in full gear on the other side, lined up with their guns pointed at each other. We didn’t know what was happening, didn’t know if a war would break out any minute. My parents were afraid the entire city would be cut off. The first thing everyone did was rush to the shops and start stockpiling food.”

Being rash young boys, Heinz and his friend Detlef decided to see for themselves, so they hopped on the subway and went downtown to Checkpoint Charlie, the most famous border crossing between the U.S. and Russian sectors. There they saw a similar scenario, only more frightening: a row of American tanks on one side and a row of Russian tanks on the other. Soldiers on both sides were setting up machine guns.

This photograph shows what Heinz saw that day. When he told his parents, they were furious at him for taking such a risk. 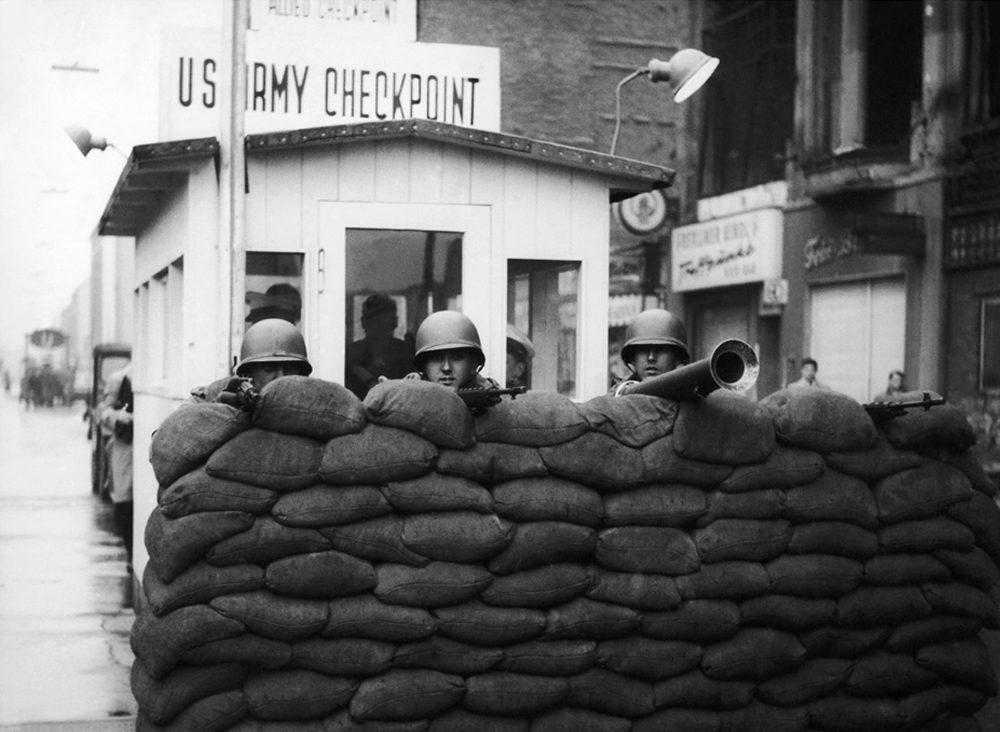 “For the next few days, people were still crossing wherever they could, especially if their homes were near the border. They were running across at night, jumping from windows. At first the wall was just rolls of barbed wire and armed guards, but gradually the wall got higher and the escapes became fewer.” 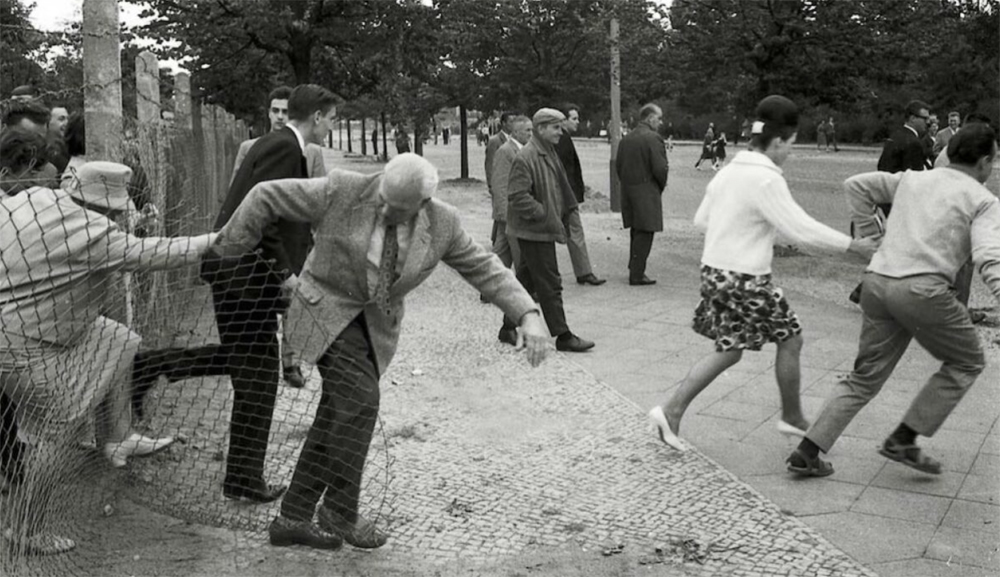 Heinz remembers one sad story. “We had good friends, a couple with a fourteen-year-old daughter who lived in the Russian sector, just on the other side of the border. One night an East German guard came to the door and said: ‘My family is going to cross tonight. Someone on the Western side will cut the barbed wire at 1:30 a.m. and a group of us are going to escape. Do you want to come?’

“Our friends said yes and packed their bags. But when the time came, the 85-year-old grandmother said she was too old, and they should go ahead without her. The young daughter would not leave without her grandmother. She started screaming ‘Oma! Oma!’ and became hysterical. They could not calm her down in time, so they missed their chance.”

As people on both sides watched in horror, the wall began to rise, completely encircling West Berlin’s twenty-seven mile border. The city had been sliced in half as cleanly as a knife through the heart. Families were torn apart, lovers were separated, people lost their jobs because they couldn’t cross the border to work. 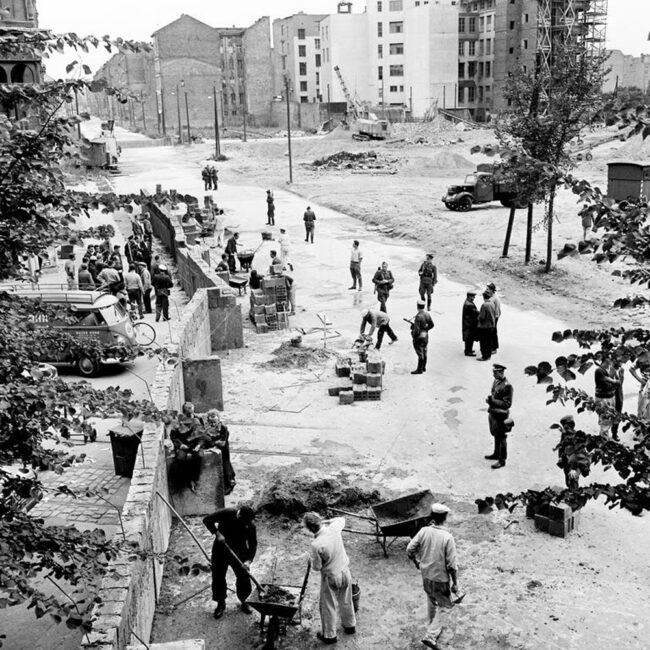 As the wall rose higher and higher, people called and waved goodbye for the last time. 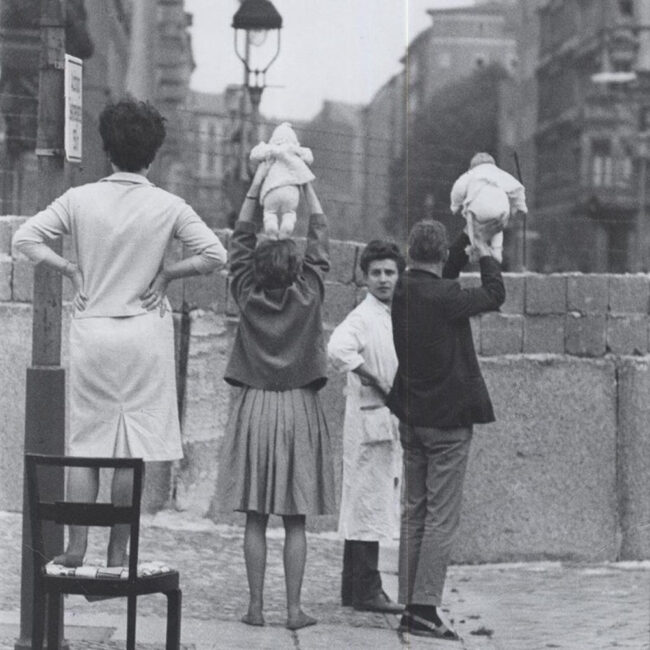 Heinz recalls: “A footpath in our neighbourhood ran beside the border and on the eastern side was a large factory building. In the beginning, people would wave to us out the windows. It was as if they were saying ‘We’re still here, please don’t forget about us!’ Then one day the windows were boarded over so the workers could not see or signal to the west.” 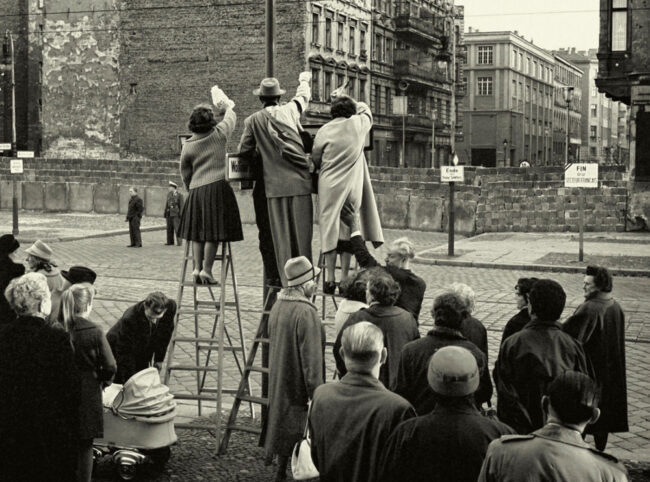 Within one year, the wall was virtually impassable, although people still tried to escape. The Berlin Wall memorial states that one hundred and forty people lost their lives trying to make it over the wall. They were either shot, killed accidentally, or killed themselves when they were caught. 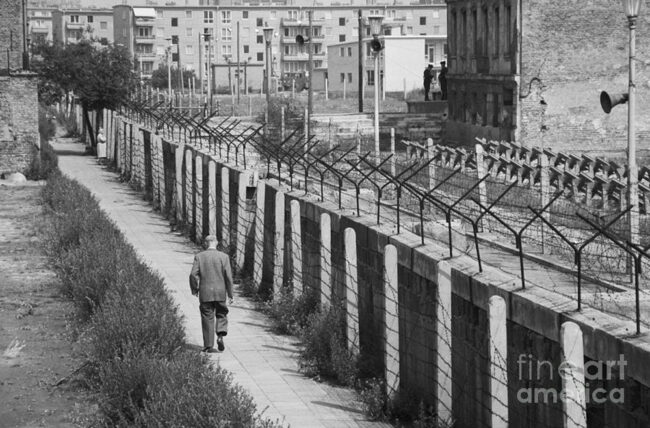 West Germany set up platforms all along the wall, so that people could still try to contact each other visually. Giant neon billboards flashed the news from West Germany over the wall, since the East Germans were now cut off from accurate news about world events. The hated wall became covered with graffiti on the Western side. 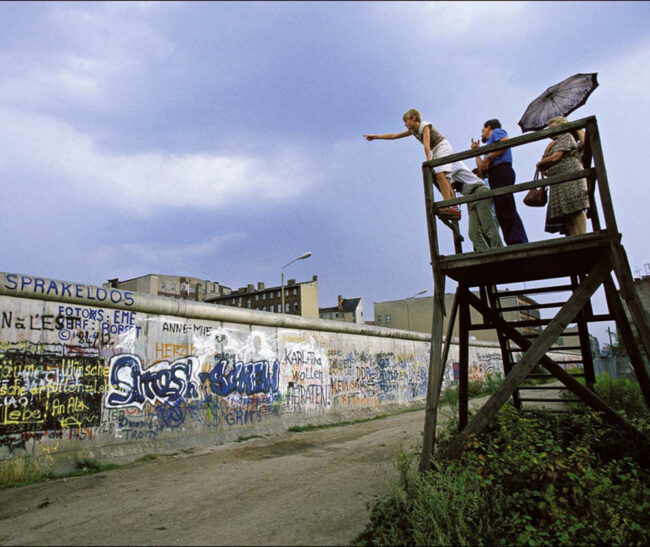 Over the years the wall became thicker and stronger, and finally ended as a double wall with an area in between, called the death zone. Heinz and his friends used to torment the East German guards by tying fishing line around rocks and throwing them toward the wall, then reeling them back so they tripped the ground wires.

“The floodlights would come on, the alarms would sound, the dogs would start barking, and the guards would come running. They never shot at us because we would be hiding around the corner somewhere.”

Even more exciting, they found their way into an apartment building that was under construction near the wall. “We would climb up to the twelfth floor at night and take the lids off five-gallon paint containers, and throw them like frisbees. They would really travel far from up there, especially if there was an updraft. That created quite a commotion on the other side!”

The Fall of the Berlin Wall

Over the years, the wall became a normal part of Berlin life, albeit an unhappy reminder of a divided city. It wasn’t until November 9, 1989 that the wall came down, even more unexpectedly than it had risen.

The Cold War was drawing to a close. Out of the blue, the communist government announced that starting at midnight, East Germans would be allowed to cross into West Germany.

What followed was called “the biggest street party in the history of the world.” Two million people from East Berlin visited West Berlin that weekend. Many people brought hammers and picks and began hacking the hated wall to pieces. Over the next few weeks, bulldozers finished the job.

Berlin was finally reunited for the first time since 1945. “Only today,” one Berliner spray-painted on the wall, “is the war really over.”

Heinz, who had emigrated to Canada in 1974, was on a business trip in El Paso, Texas when he heard the news. “I was sitting in a hotel room reading my book when the phone rang and my wife screamed: ‘Turn on the TV!’

“When I saw what was happening, I bawled my eyes out. I just sat alone in my room and cried.” 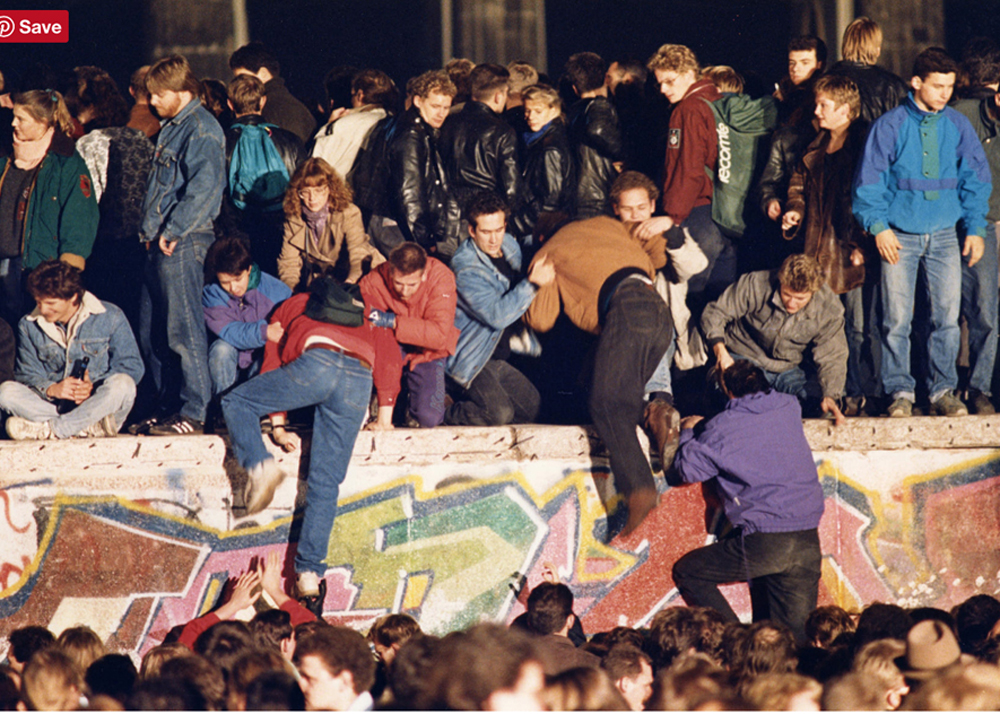 Heinz didn’t return to Berlin until 1997, when he arrived with his wife and children. For the first time since he was a boy of twelve, he was able to walk down the street and see what his pleasant neighbourhood looked like without the shadow of the Wall hanging over it. Here’s a photo of him today. 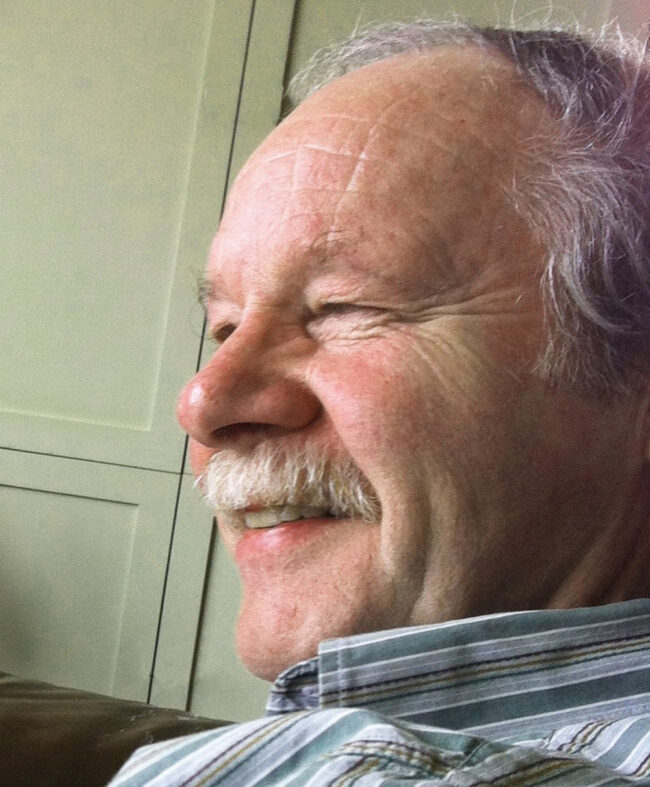 Even after eight years, rubble was still lying around so he picked up several chunks as souvenirs. 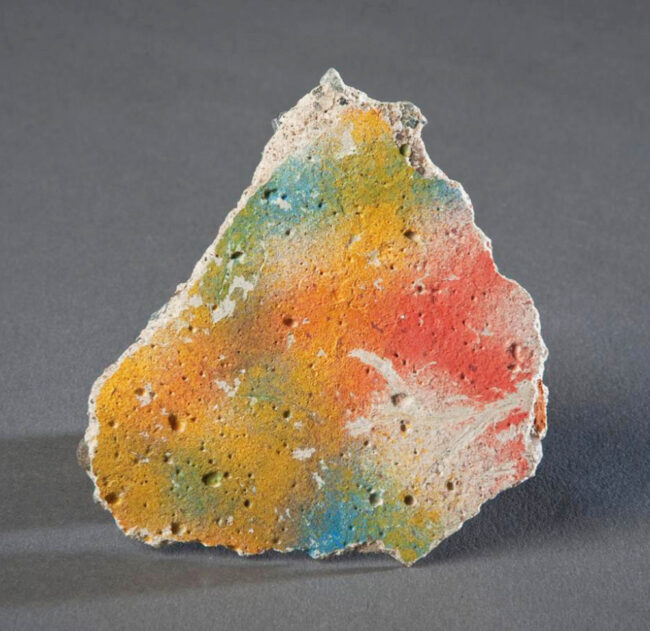 To anyone else, they look like lumps of concrete covered with spray paint. To my husband, they are a painful reminder of how easily nations can be torn apart.

My Dear Friends: I must be one of the few non-Ukrainians in the world who can sing the entire Ukrainian national anthem. I learned it back in 1970, while attending the University of Saskatchewan in Saskatoon and living temporarily at a Ukrainian-Canadian student residence called Mohyla Institute. We had to stand and sing the anthem with gusto before dinner each night.

These days I find myself singing it over and over. Here are the lyrics, with their English translation: Ukrainian National Anthem.

Yours in freedom, Elinor 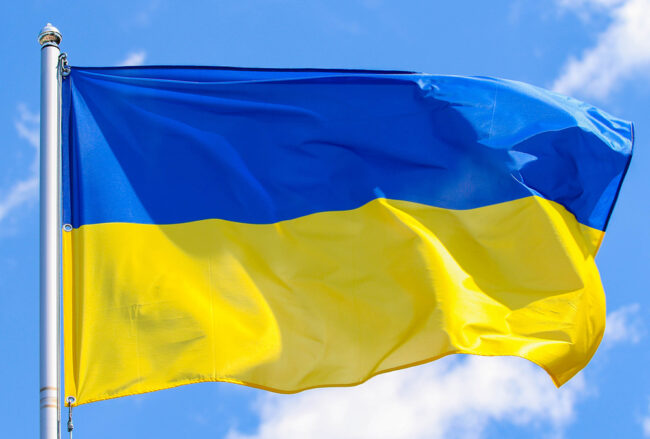