Rosie the Riveter, the bomb girl with the bulging biceps, is an iconic image. But Canada led the way with our own glamourpuss: Ronnie, the Bren Gun Girl. She was one in one million Canadian women who worked in factories during the war. 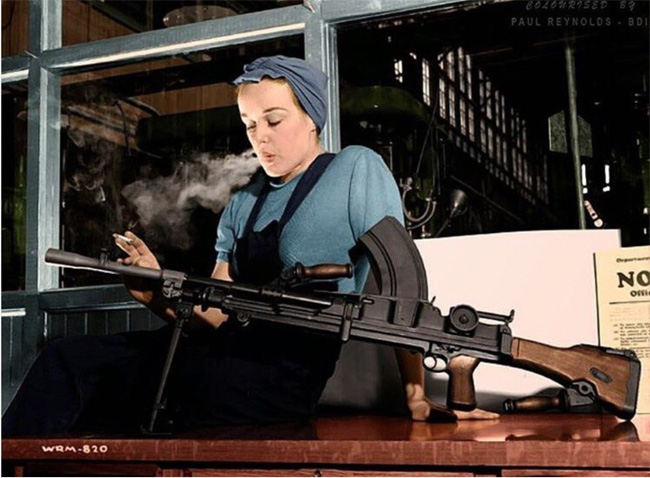 When World War Two began, British women trooped into factories in full force. They were desperately needed there, as Britain was fighting for its very survival. 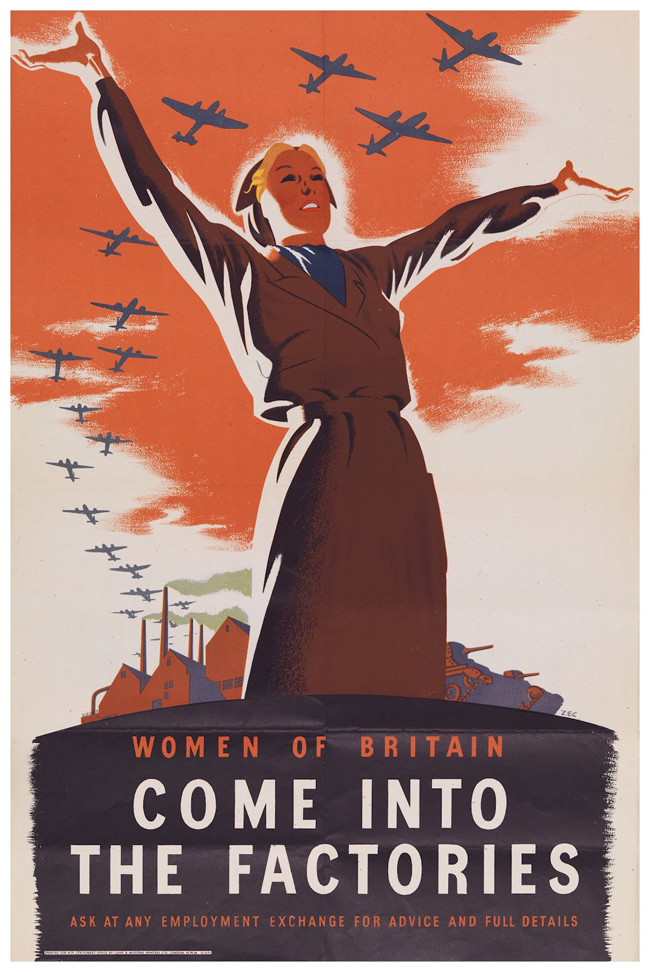 Canada soon followed suit. By war’s end, nearly ONE MILLION Canadian women were working in factories. (That’s a staggering figure when you realize that our total population in 1939 was just over eleven million.)

Veronica Foster, shown in the top photo, was discovered by the National Film Board in May 1941. This 21-year-old came to represent Canadian women factory workers, because she was efficient at her job, but still ultrafeminine.

(Incidentally, her daughter later said that Veronica didn’t smoke, but the photographer asked her to smoke because it made her look cool and sexy.)

Veronica was one of 14,000 women who toiled at the John Inglis Co. Ltd. In Toronto, producing Bren light machine guns on a production line. And she became known as “Ronnie, the Bren Gun Girl.”

Ronnie was soon catapulted into the public eye. Here’s an article in the June 28, 1941 issue of my favourite Star Weekly magazine, showing Ronnie at work. (To see my whole collection of covers, click: Star Weekly at War. 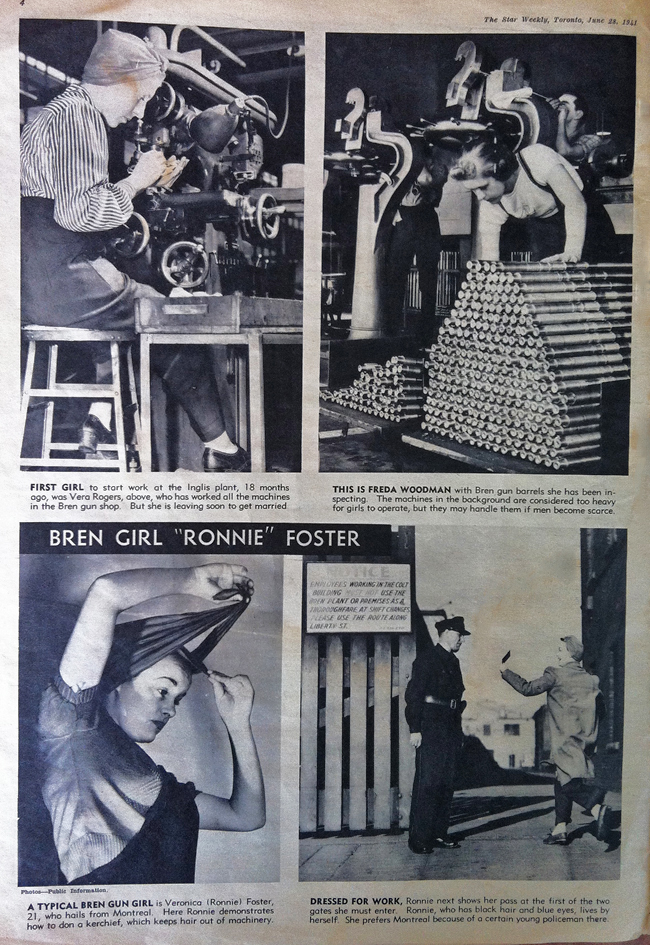 And here’s a photo of Ronnie going out for a night on the town, looking glamorous after her day spent building machine guns. 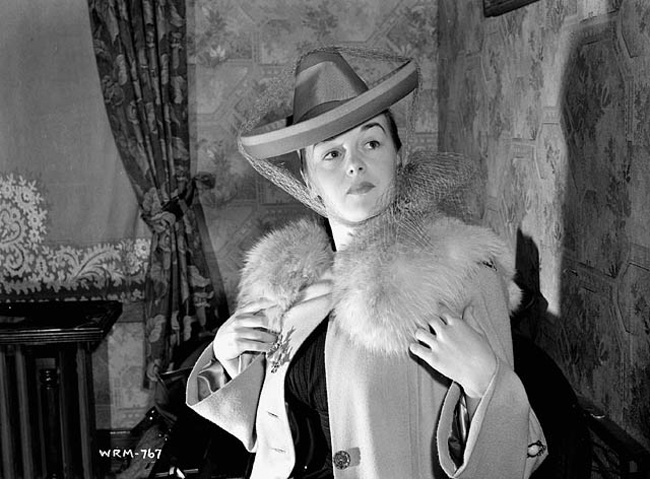 Ronnie was featured on the front page of the New York Times in an article dated October 4, 1941 – two months before the U.S. entered the war – as part of a story on how Canadian women were working for the war effort.

Speculation is that she served as the model for a similar popular figure that later became known as Rosie the Riveter.

This term first appeared as a song title in 1942. Here’s a cute video (two minutes, twenty seconds) featuring the song “Rosie (brrrrr) the Riveter” by the Four Vagabonds, with old footage of girls and wartime work. To watch it, click: Rosie the Riveter. 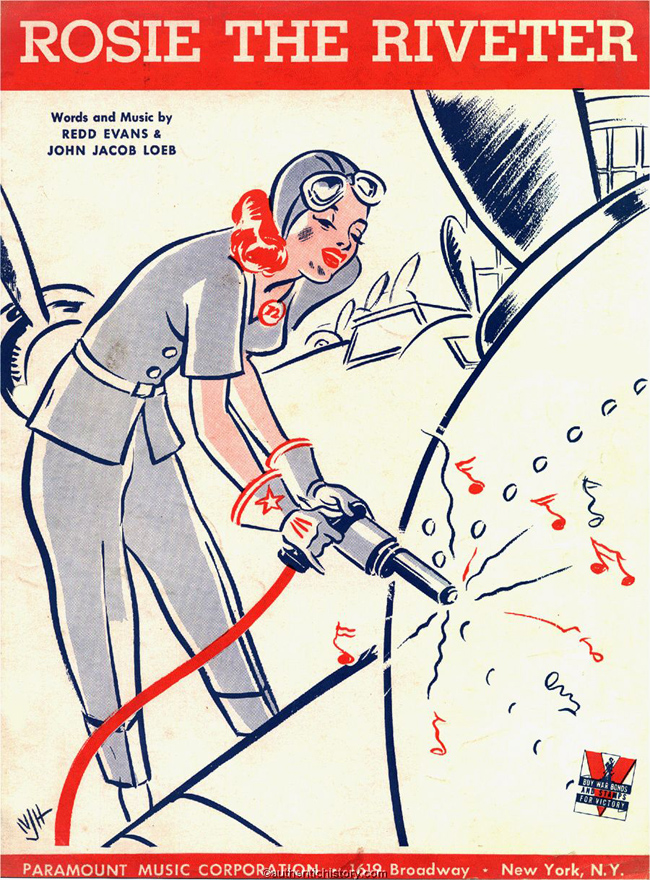 Also in 1942, Pittsburgh artist J. Howard Miller was hired to create a series of morale-boosting posters. He based his “We Can Do It!” poster on a photograph of Michigan factory worker Geraldine Doyle. At the time of this  poster’s release, the name “Rosie” wasn’t associated with this image. 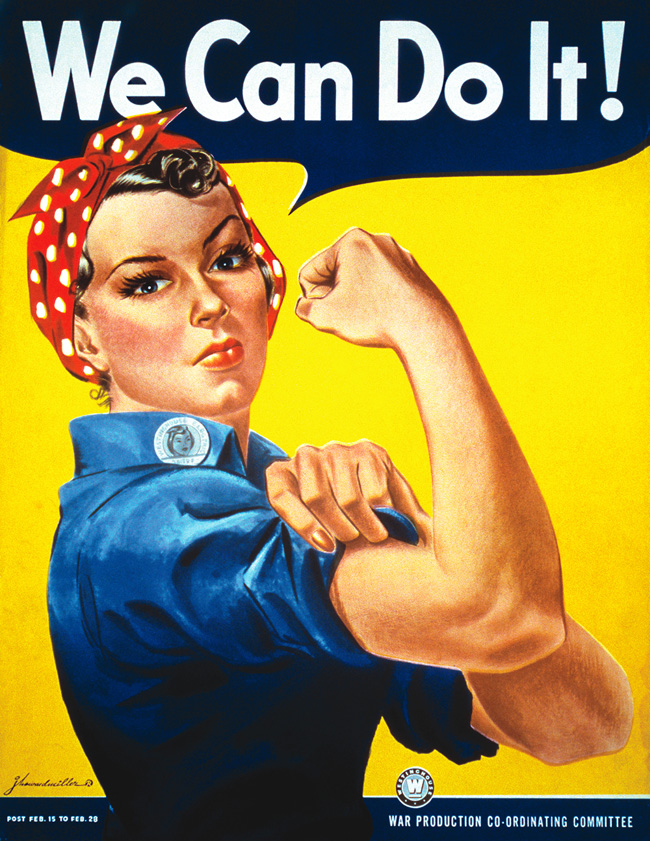 Illustrator Norman Rockwell then created his version of Rosie for the May 29, 1943 cover of Saturday Evening Post. It was the first time the name “Rosie” became associated with wartime factory workers. I love Rockwell’s version of this tough cookie carrying a tin lunch bucket with her name on it. 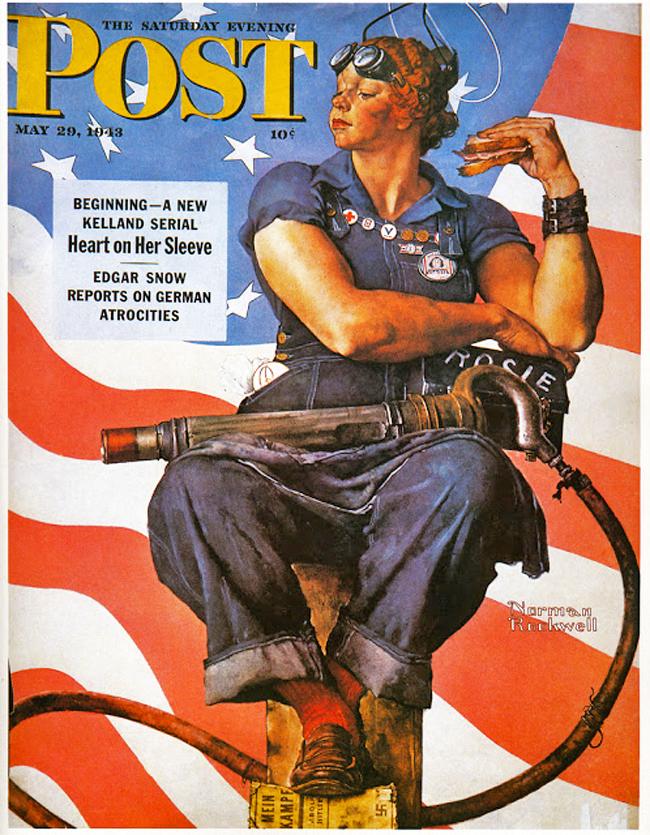 These Canadian women seated at a long table are soldering together shipping tins containing filled fuses, at a secret munitions plant called GECO, located outside city limits near Scarborough, Ontario. The plant covered 346 acres and had 172 buildings. Barbara Dickson has written a book about this factory, and you can see more by clicking here: Bomb Girls: Trading Aprons for Ammo. 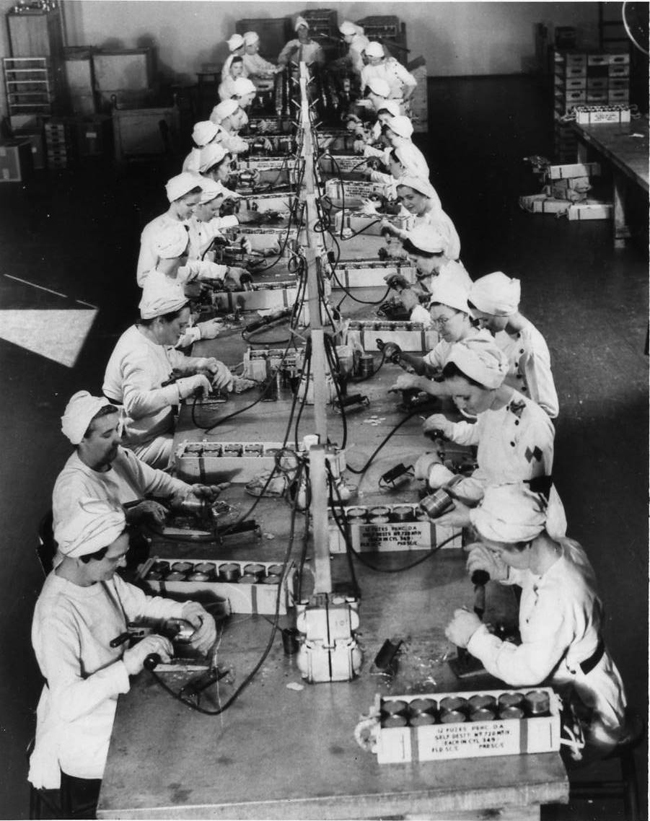 Dozens of photographs were taken of women looking glamorous on the assembly line, so everyone could be assured that they weren’t losing their essential femininity. Although these photos were clearly staged, they were real American factory workers.

Here Mrs. Mary Betchner inspects one of the 25 cutters for burrs before inserting it in the inside of a 105mm howitzer at the Milwaukee, Wisconsin plant of the Chain Belt Co. in February 1943. Her son was in the army; her husband was in war work. 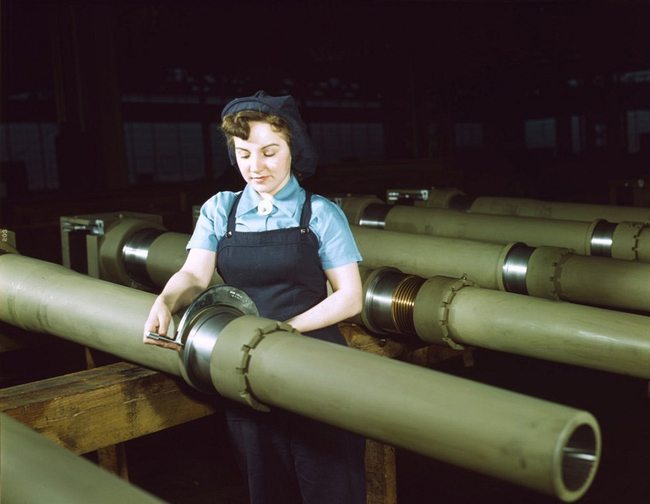 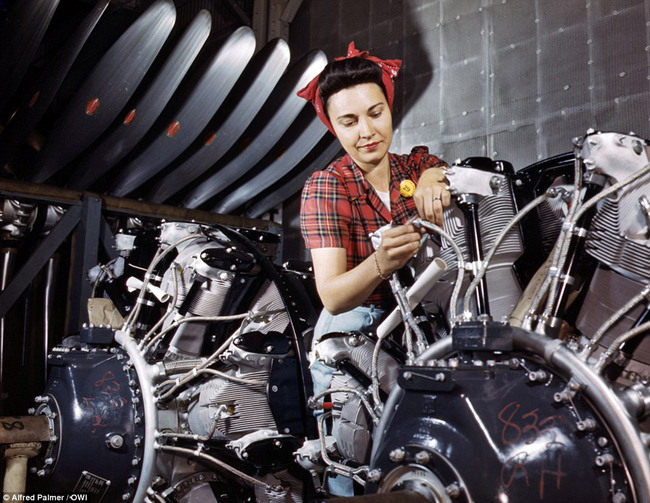 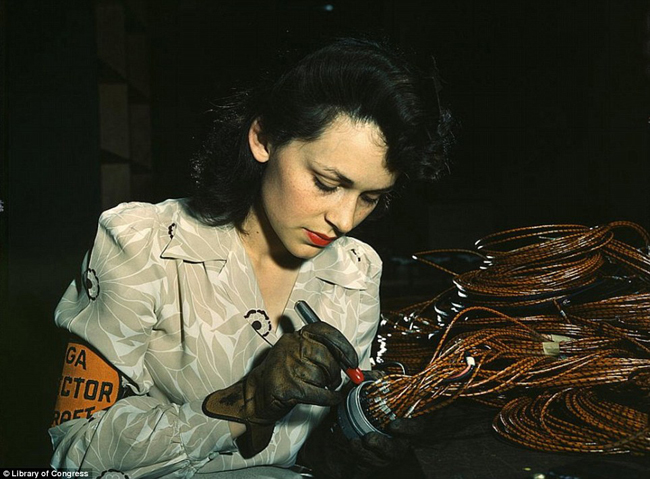 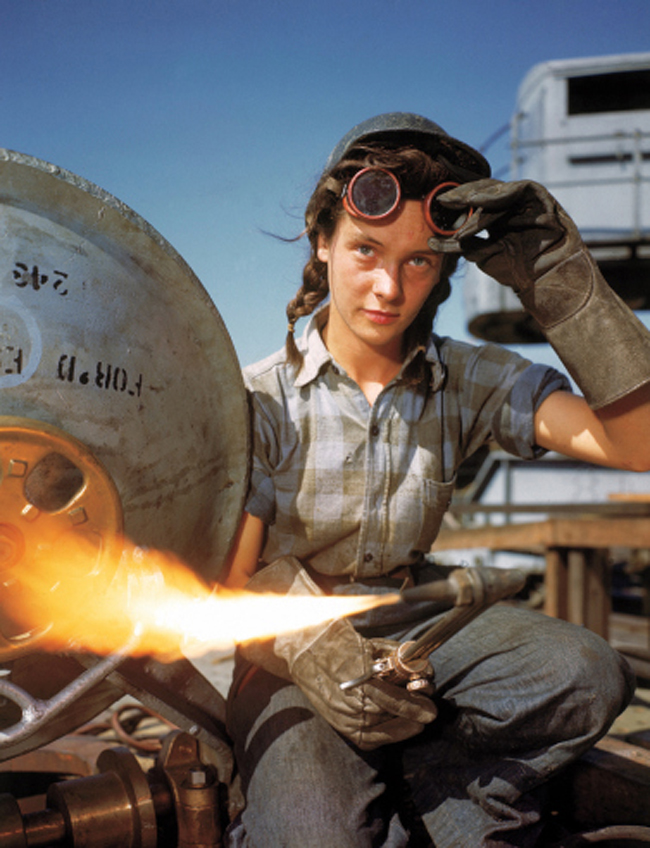 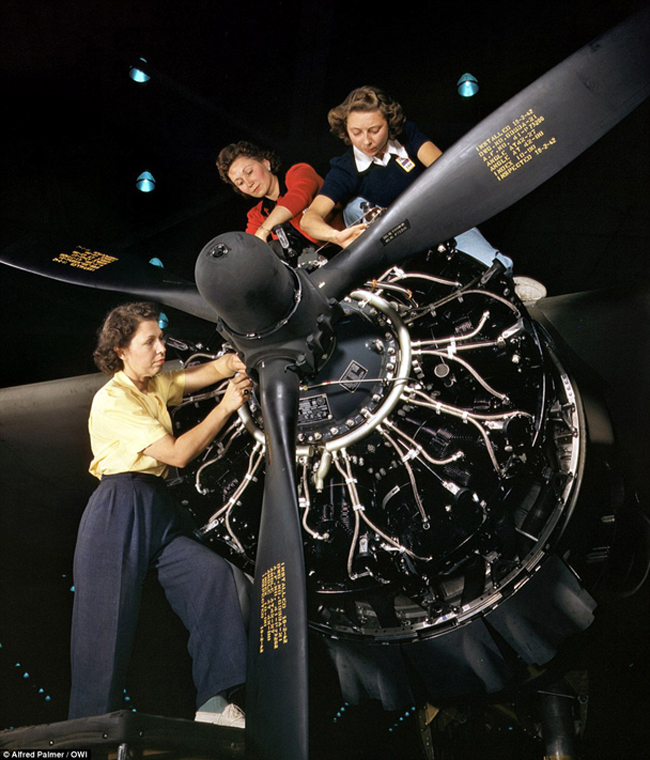 Women from Australia and New Zealand were urged to take factory jobs, too. Here’s an Australian poster showing the factory worker in overalls and the ubiquitous kerchief (designed to keep flowing locks out of the machinery). 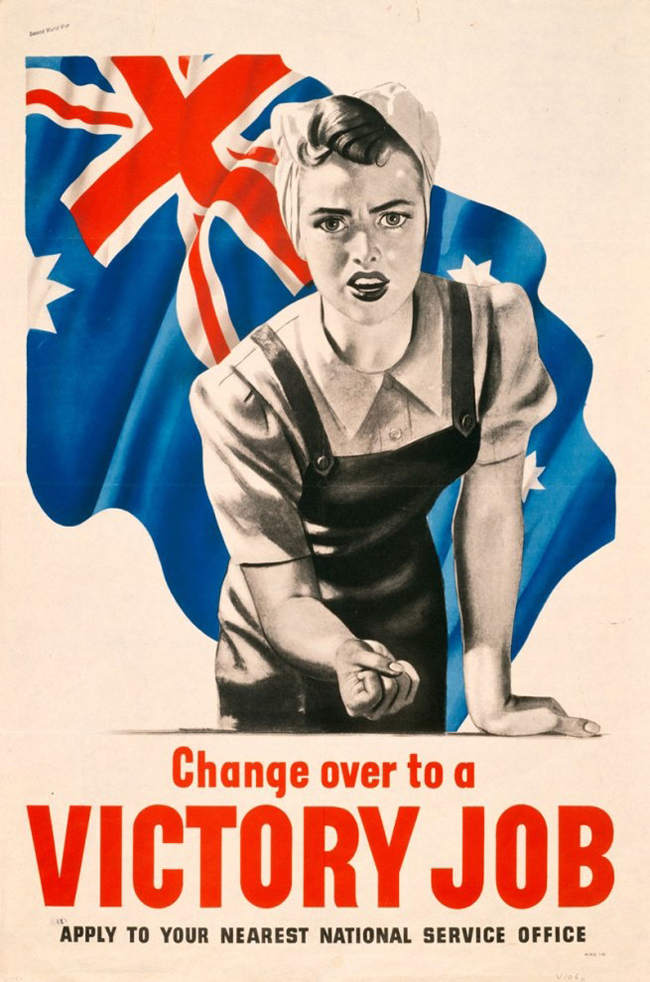 The red kerchief became a well-known icon of bomb girls everywhere, as shown in this 1943 illustration. 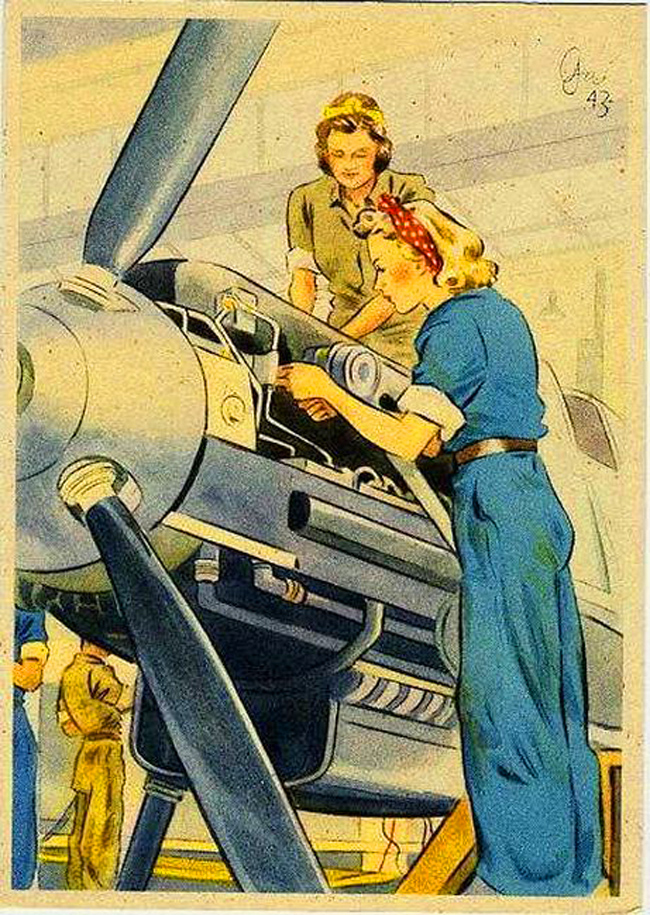 Russian women were also pressed into action, which is no surprise. Since the Revolution, they were supposedly treated as equals to men. It would be considered an insult to emphasize their femininity. In fact, they were more likely to be using machine guns than building them. 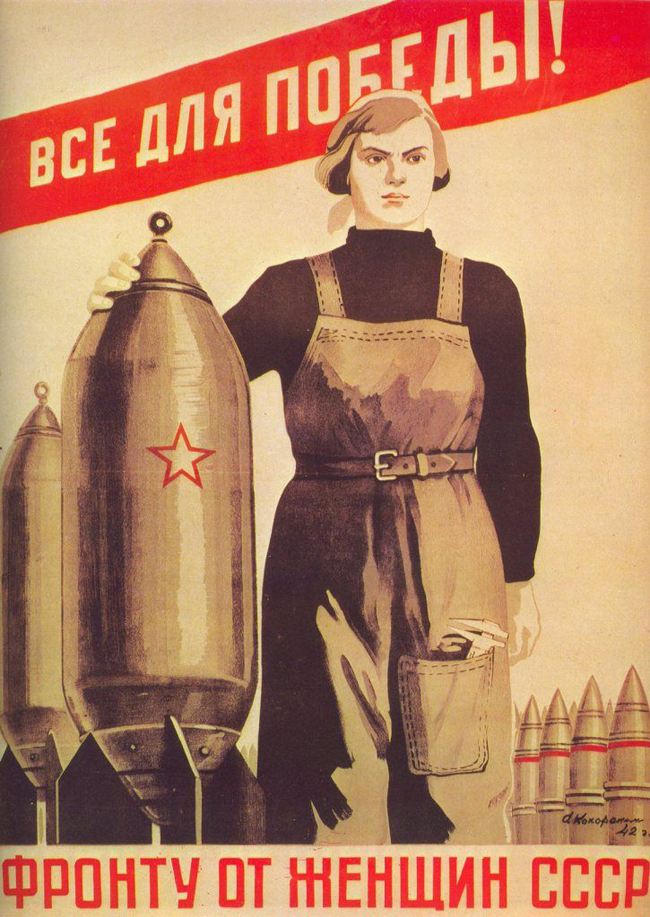 But thousands of Soviet women and even children did manufacture armaments. This photo was taken at a factory in Moscow in 1942. The sign reads: “Defenders of Moscow, the whole Soviet nation is with you!” 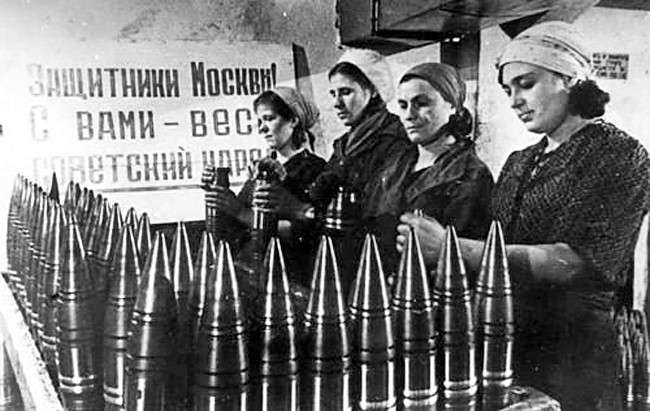 Japan didn’t even wait until attacking Pearl Harbour in December 1941. Their women were counting bullets in this photograph taken six months earlier. 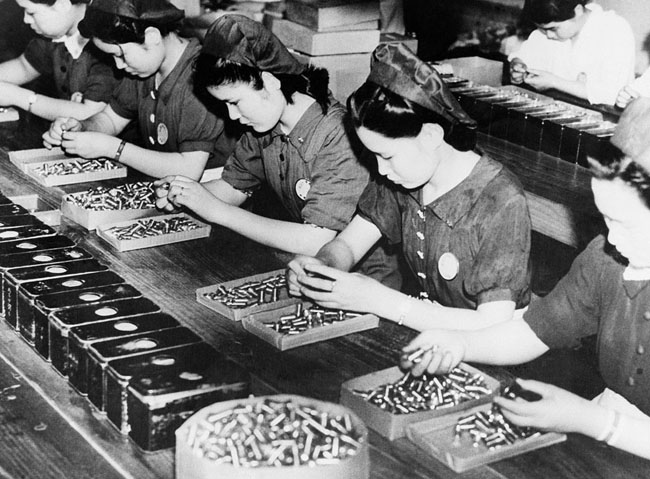 Hitler initially promised that German women would be protected from the horrors of war. Their sphere of influence was Kinder, Küche, Kirche, meaning “Children, kitchen, church.”

But that lasted only until 1943, when Germany simply ran out of foreign workers drafted from the nations it had occupied. (Besides, would YOU trust a conquered people to manufacture weapons being used against the Allies?)

The future was looking pretty black for Germany, so they did the same as everyone else: declared “total conscription.” The government told women to join the armed forces and work in factories. 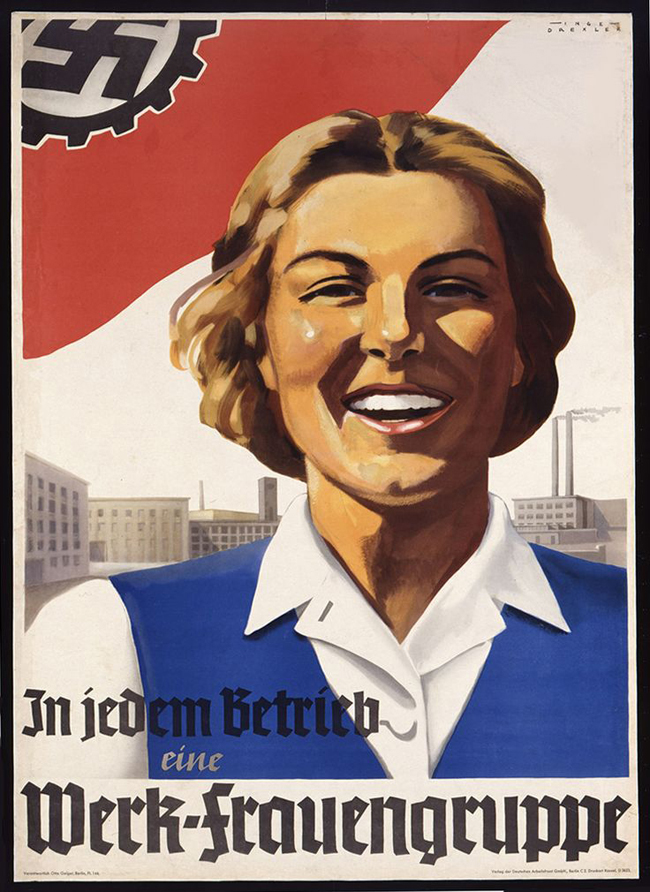 Here’s a group of German women hard at work on the assembly line. They look very serious. I wonder if they suspected that things weren’t going well. 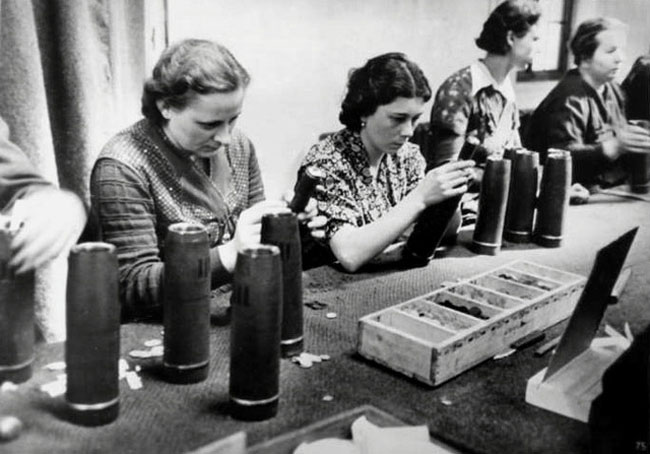 But finally, after six long years, the men came home and the women returned to the kitchen and the nursery, as shown by the number of babies born in every country. Even Germany has a huge population of baby boomers.

But the taste of money and freedom that women experienced led to the women’s liberation movement of the 1960s, when once again, Rosie the Riveter became a popular image. 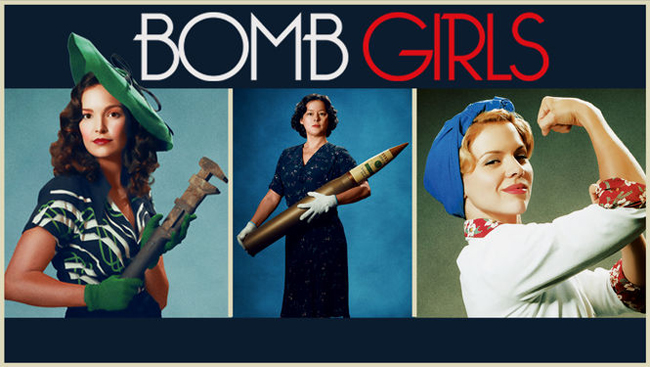 Thank you, Bomb Girls everywhere, for your blood, sweat and tears!

The Star Weekly was a Canadian newsmagazine published by the Toronto Star. During the Second World War, a colour illustration with a wartime theme appeared on the cover each week. Here’s a September 18, 1943 image showing two Rosies, one carrying a lunchbox with her name on it. To see my entire collection of Star Weekly covers, click: Star Weekly At War. 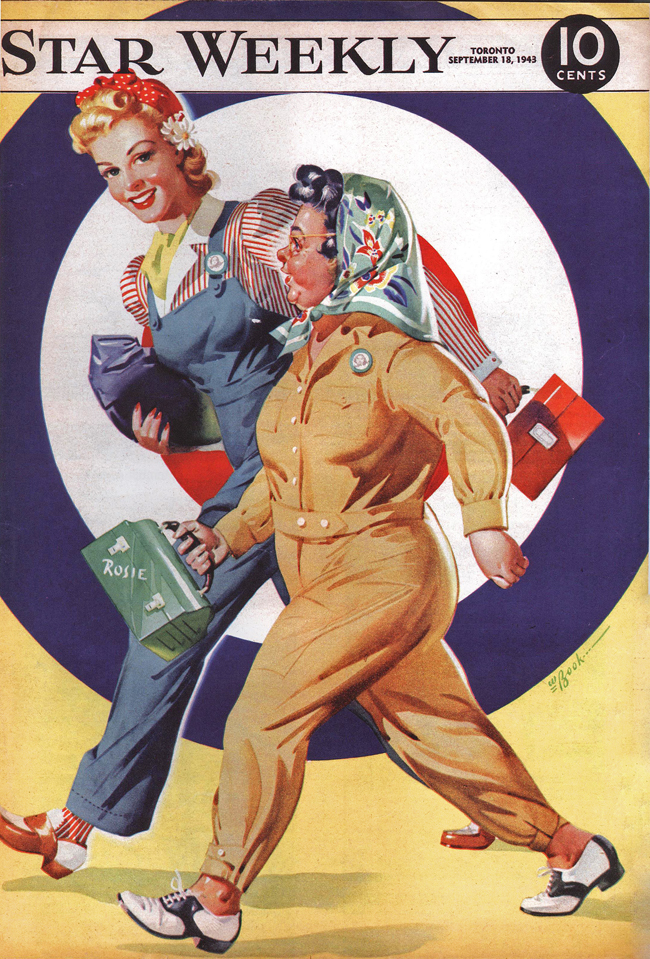