The Christmas season was especially lonely for the homesick men and women serving overseas in wartime, as well as their families on the home front. Here are just a few examples of the many thousands of Christmas cards and letters that winged their way between loved ones in both world wars. 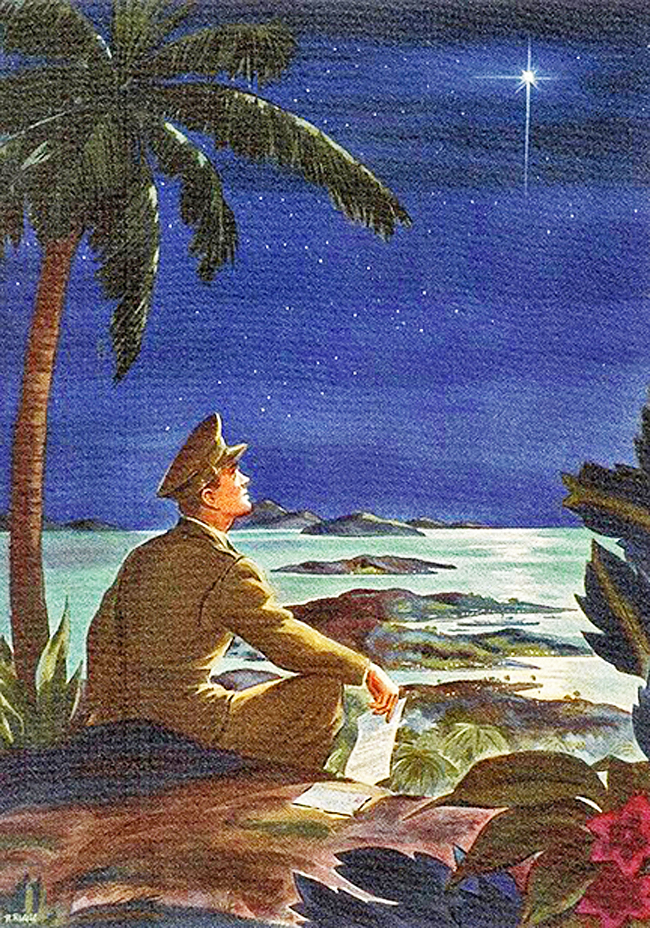 When I went searching for images of wartime Christmas cards, I was surprised to find that most of them were not sad or sentimental. I’m guessing that it was of paramount importance to keep up morale, and so the cards tended to be funny or lighthearted, almost child-like. 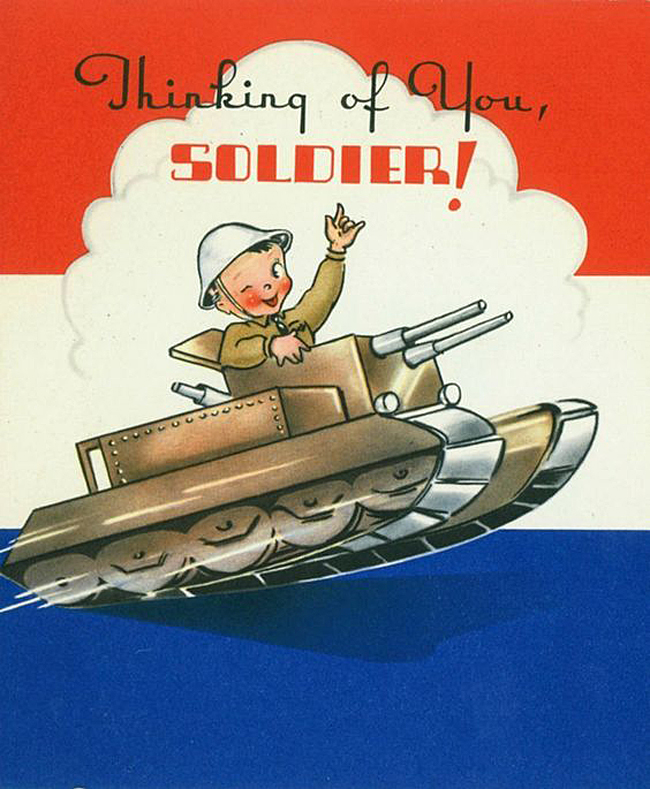 Many of the cards show various types of military vehicles or weapons, which I guess was understandable — from the soldier in the tank above, to Santa driving a jeep instead of a sleigh. 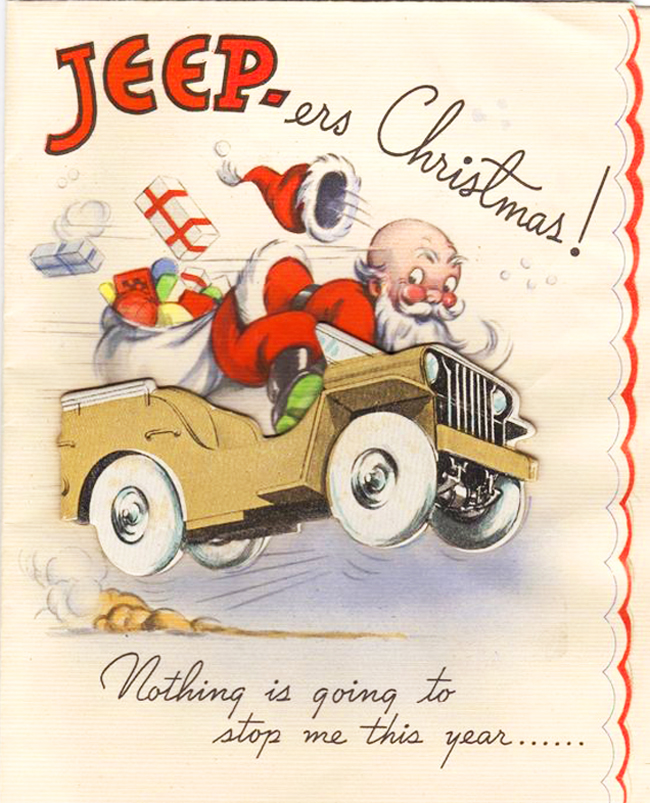 Here’s another card making fun of life in the army. There are many more examples of American Christmas cards than those from other nationalities. That makes sense, because the U.S. was the richest Allied partner, with more money to spend on cards, posters, magazines, and other wartime souvenirs. 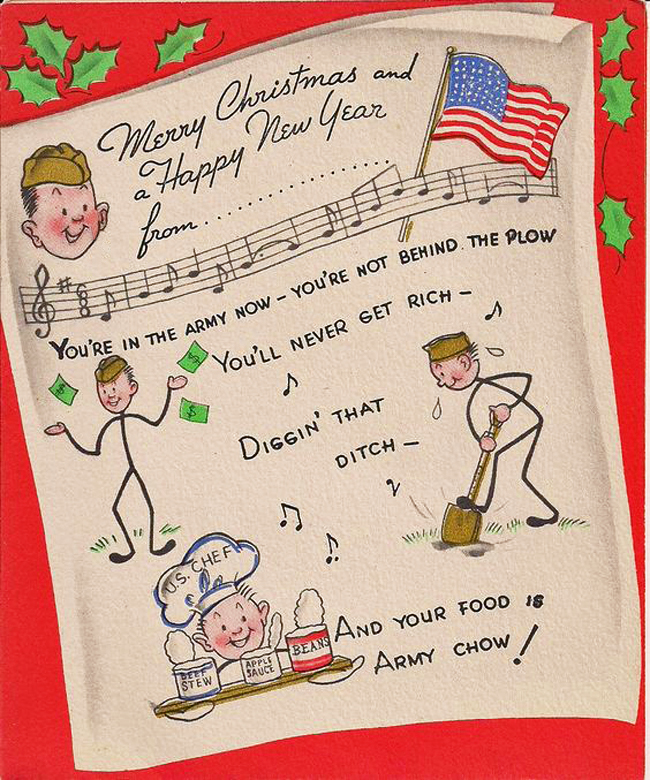 Cards were designed for people serving in all branches of the service. This one shows a cute sailor boy (although I’m not sure why his head would be sticking out of a big gun barrel). 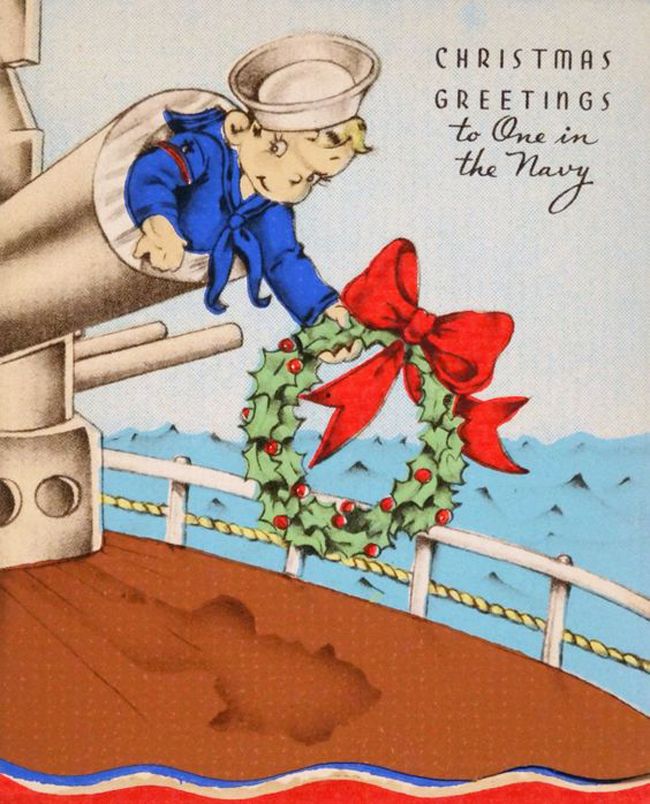 One of the rare cards featuring a nurse, I found several images of this little cartoon girl usually called Dolly Dingle. She was the brainchild of American illustrator Grace Drayton, who also created the Campbell Soup kids. Can you see the resemblance? 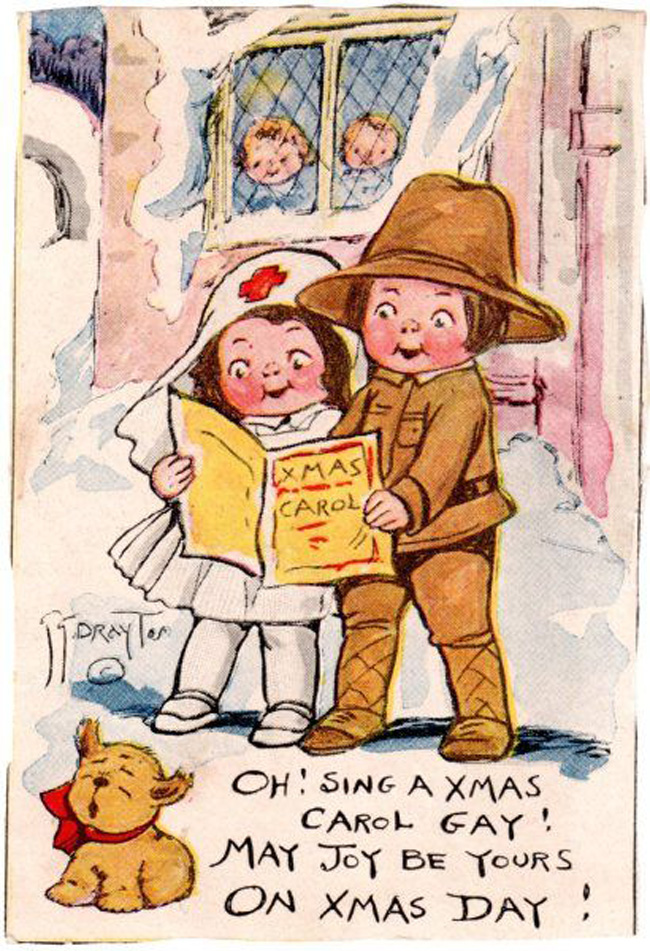 Not only the men were away from home, but many of the women, too. This card shows a member of the Women’s Auxiliary Army Corps Service, or WAAC for short. (In Canada, they were the Canadian Women’s Army Corps, also known as CWACs or Quacks!) 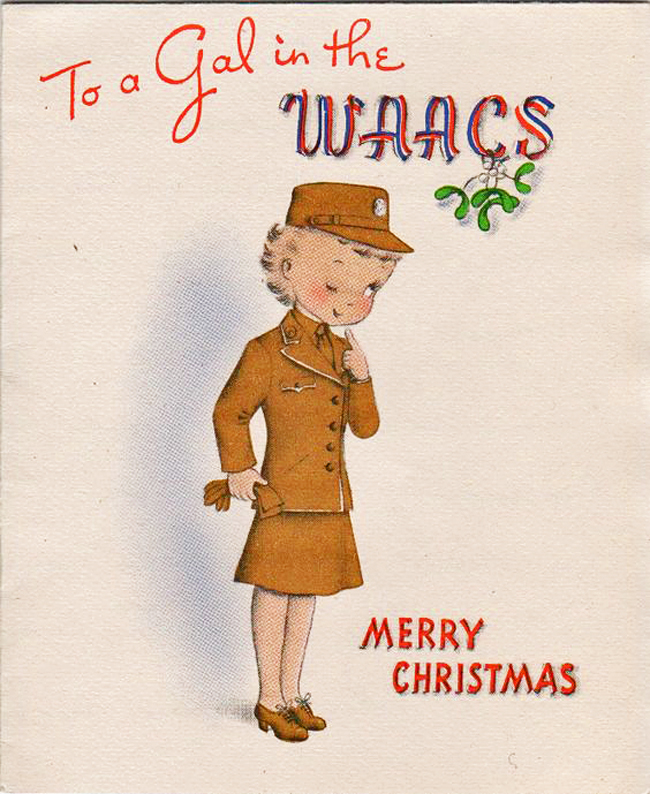 Inside the card, there’s a sweet little message: “The ARMY sure is lucky to have A GAL LIKE YOU!” 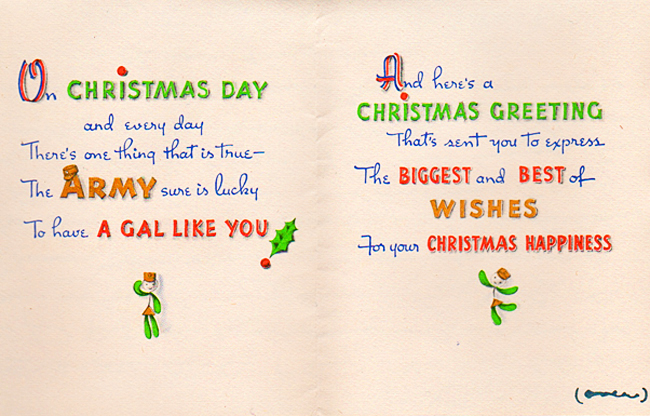 Women on every home front began to manufacture weapons in wartime. In Canada alone, almost one million women worked in factories, where they became known as “Rosie the Riveter.” You can read more about them in an earlier blog post by clicking here: Bombshells and Bomb Girls. 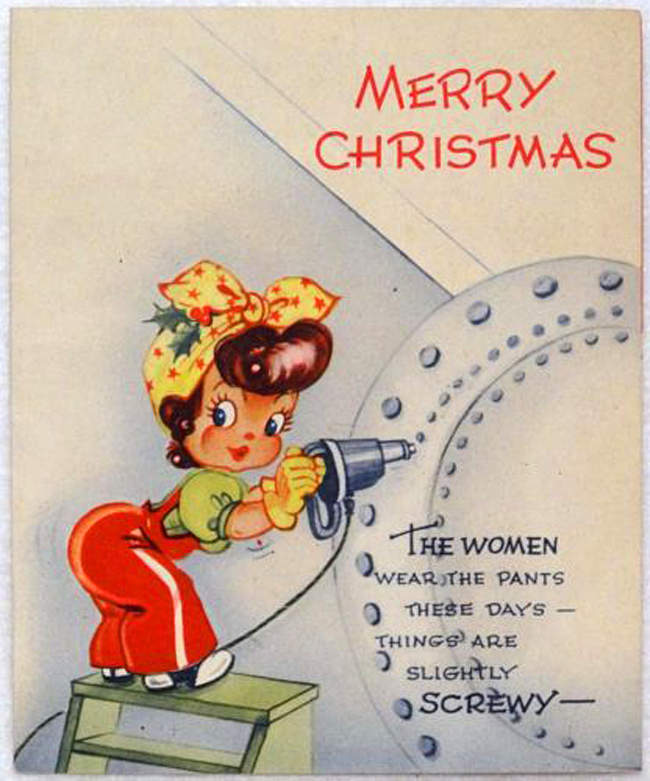 Once again, the Christmas card illustrators back then seemed to love creating cartoon characters, like this card showing a sailor, a soldier, and a pretty girl. 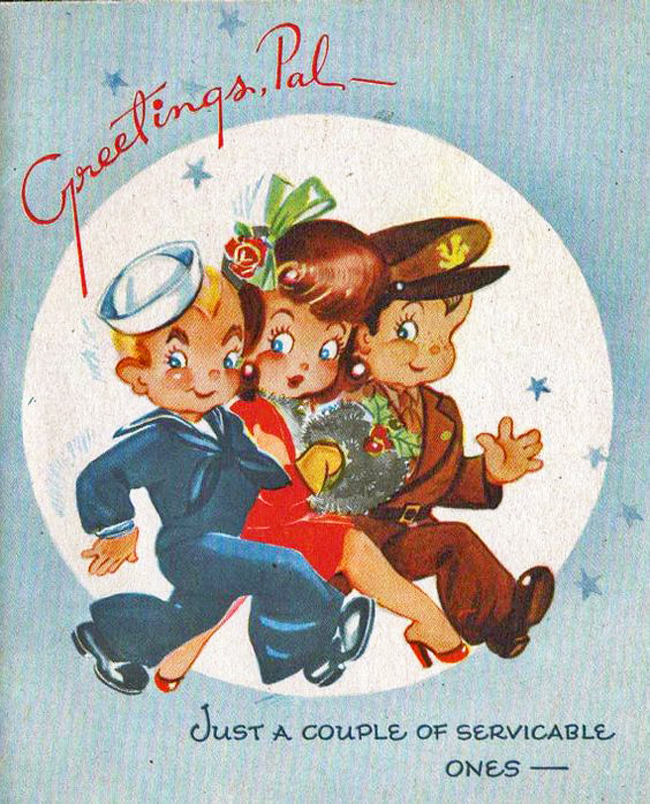 Here’s an interesting juxtaposition of a Christmas poinsettia surrounded by drawings of weapons. This card would be suitable for all branches of the armed forces. 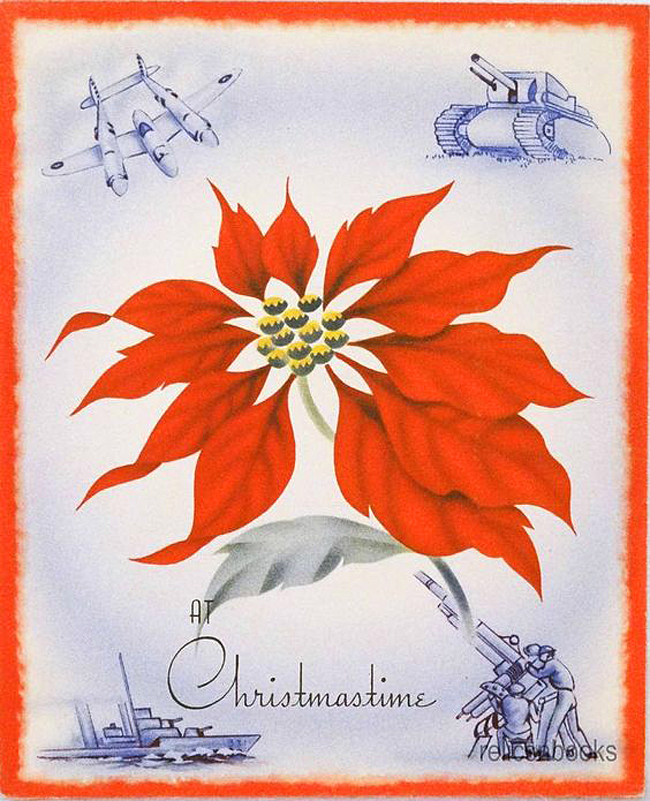 The V for Victory sign made popular by British Prime Minister Winston Churchill was adopted by all the Allied countries, and is featured on many Christmas cards and posters, this one with the Stars and Stripes background. 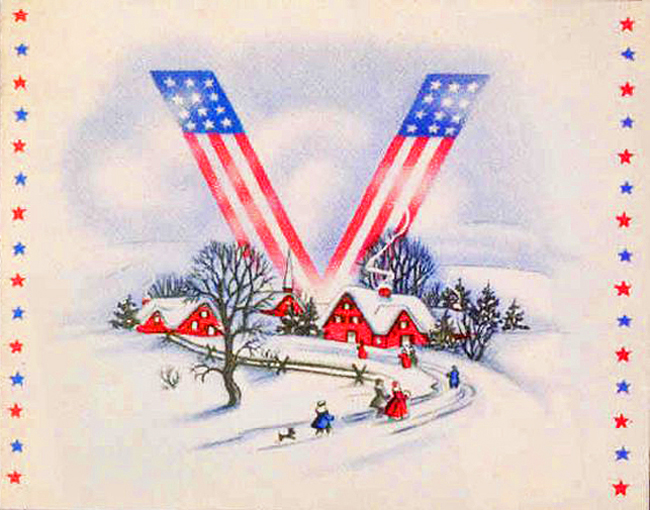 Even Santa got in on the act, giving a V for Victory sign with his fingers, his striped hat standing out against a starry backdrop. 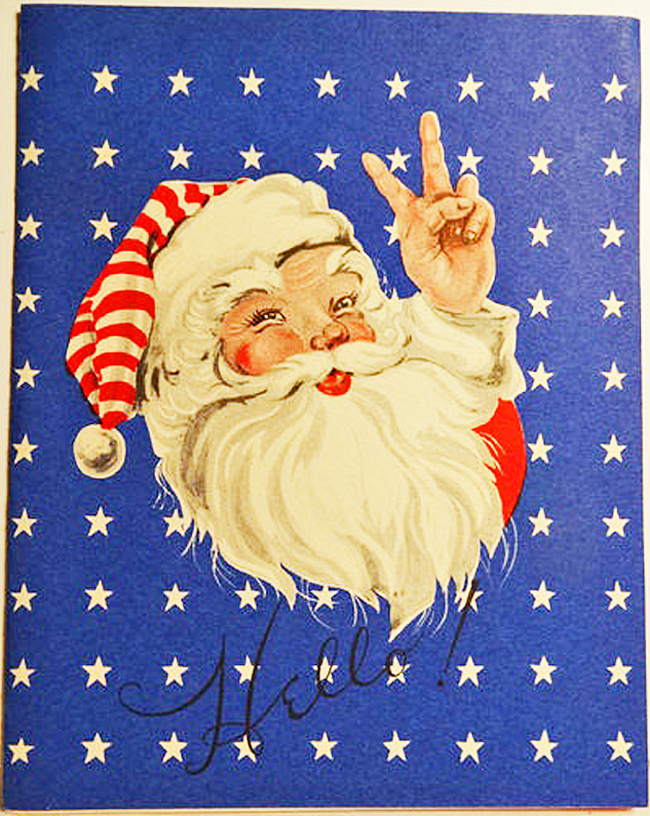 This joyful drawing shows a soldier atop the Eiffel Tower in Paris. I’m assuming this was probably Christmas 1944, after the Allies retook France and the Germans were in retreat. Sadly, another four months of hard fighting lay ahead before the war ended in May 1945. 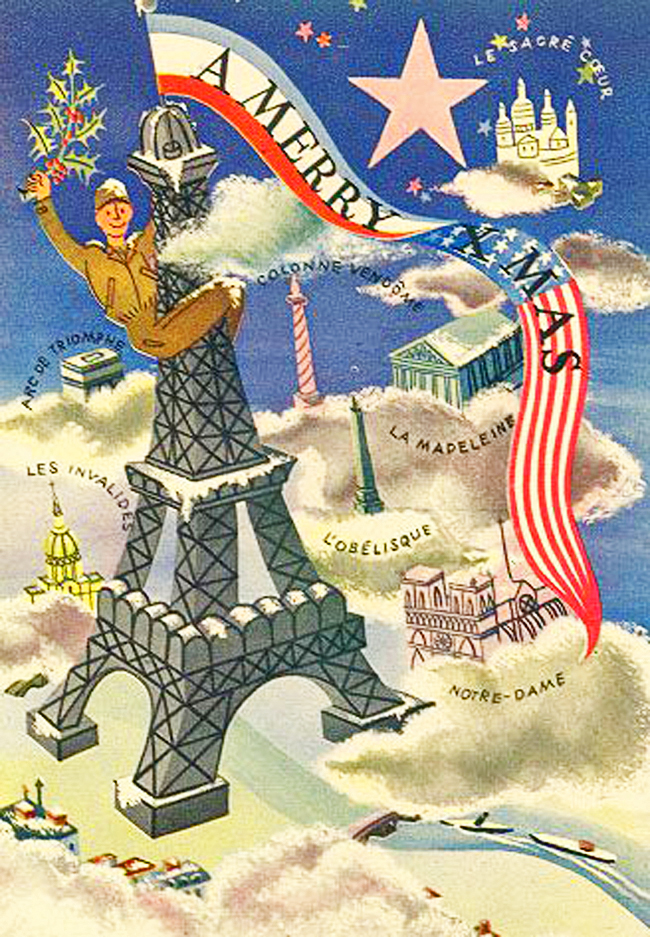 Here’s one of the few sentimental cards, showing the image of a soldier surrounded by a Christmas wreath. How their families must have been longing to see them home safe and sound! 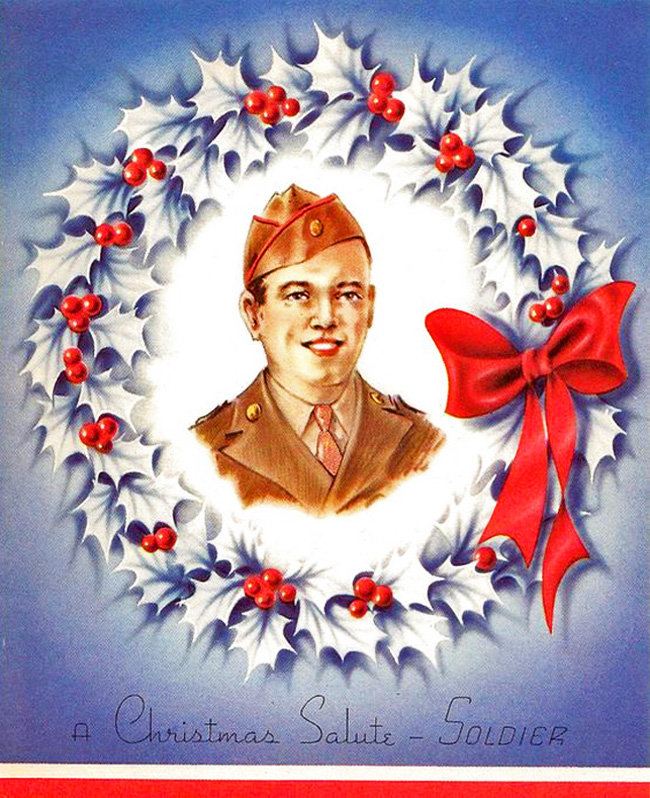 There were so many sons in the service that Christmas card manufacturers created them specifically for parents. 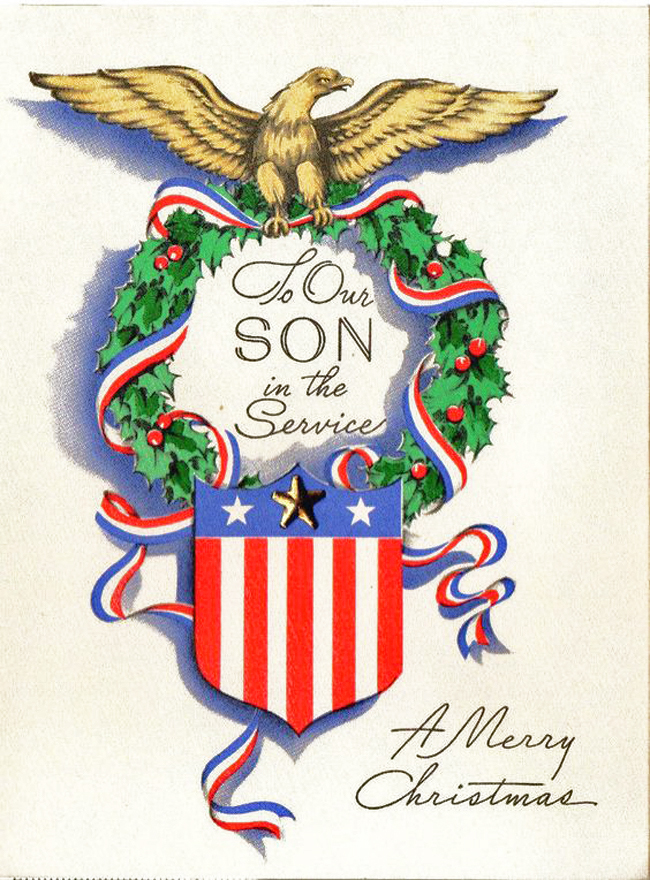 This unusual card from the First World War shows a swastika, long before it was identified with the Nazi party. It was originally designed as a symbol of good fortune. It does look odd to see a swastika on a Canadian Christmas card! 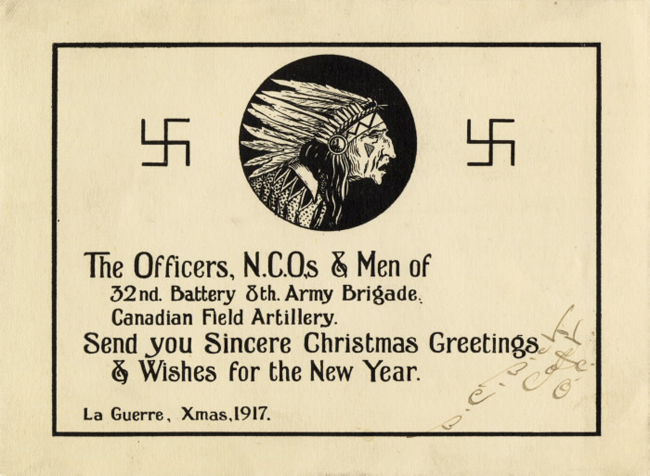 Although American Christmas cards were most common, there were cards manufactured for all nationalities. This one shows the Scottish lion and the timeless Scottish wish “Auld Lang Syne” or “Old Times Past.” 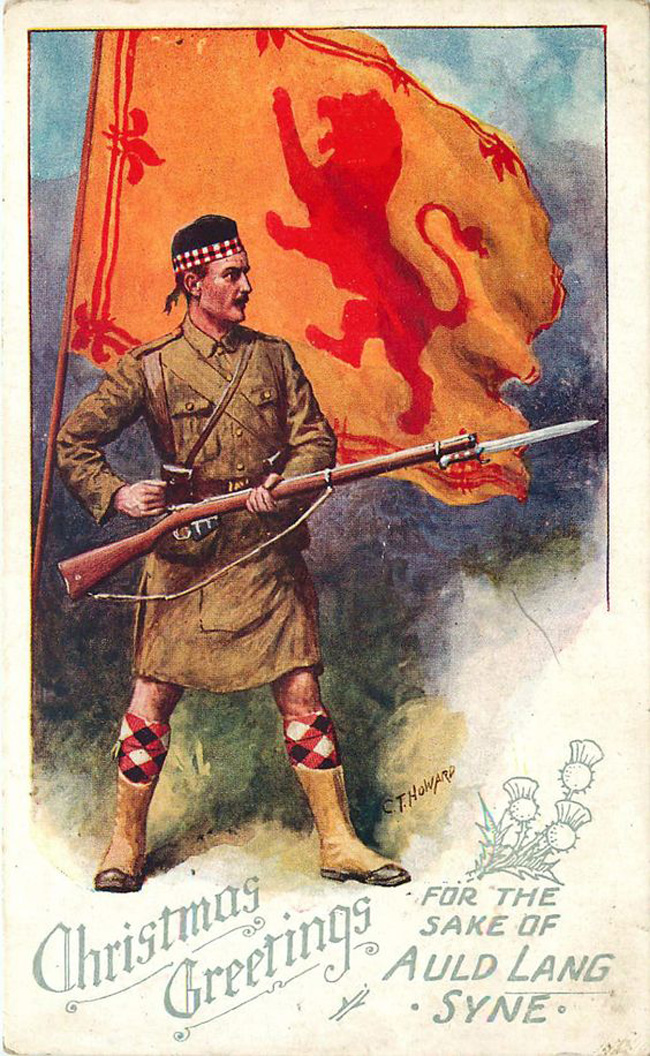 When it came to long separations, those who had it the worst were Canadians, Australians, and New Zealanders. They were too far away to go home on leave, unlike the British and even the Germans and the Russians.

The Americans didn’t go home on leave during the war either, but they didn’t arrive in Europe until 1942, and by then some of the Commonwealth servicemen had been away from home for two years.

The Aussie in England who sent this card in 1944 might have already been away from home for five Christmases. How terribly sad! 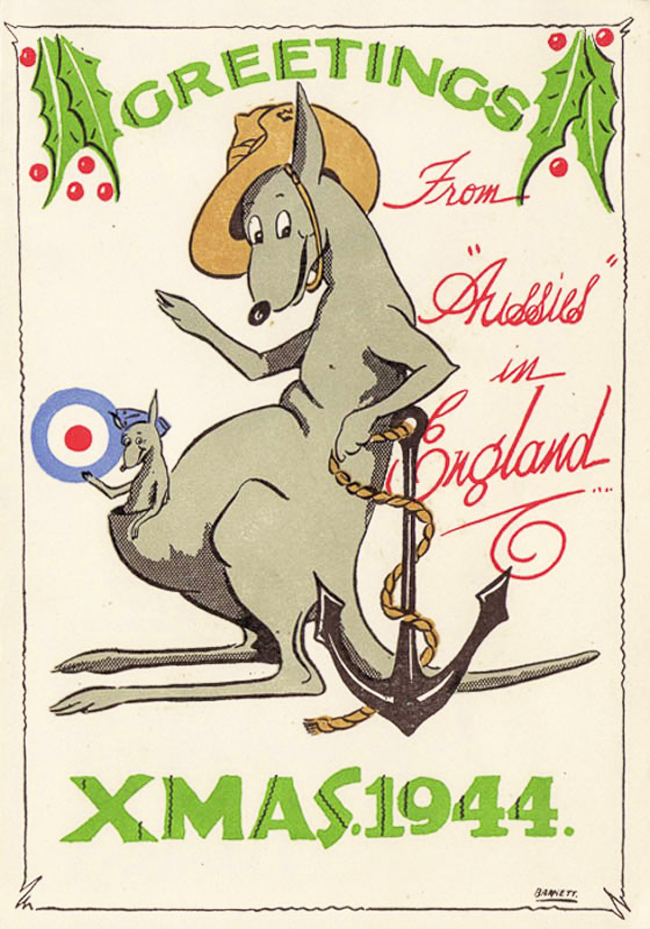 Of course the Kiwis were in the same boat, away from home for many long, weary years. At least if they were in the Middle East they weren’t suffering from the cold! 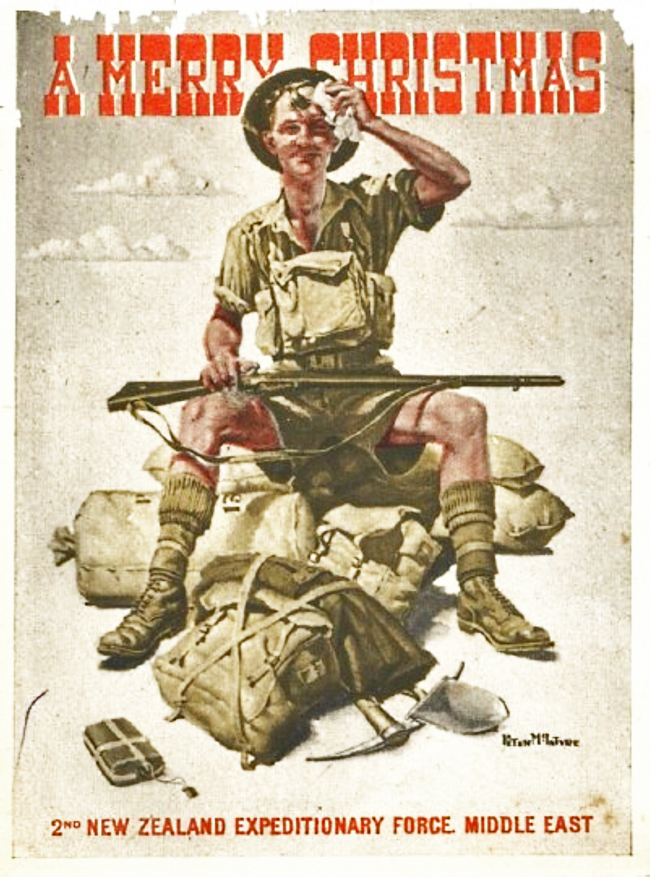 Since Christmas is and always has been a major celebration in Germany, which sparked many of the traditions enjoyed by other countries around the world, it isn’t surprising that many German cards were printed, like this one from the First World War. The caption is translated as “The Best Christmas Gift” meaning that this German soldier made it home for Christmas. 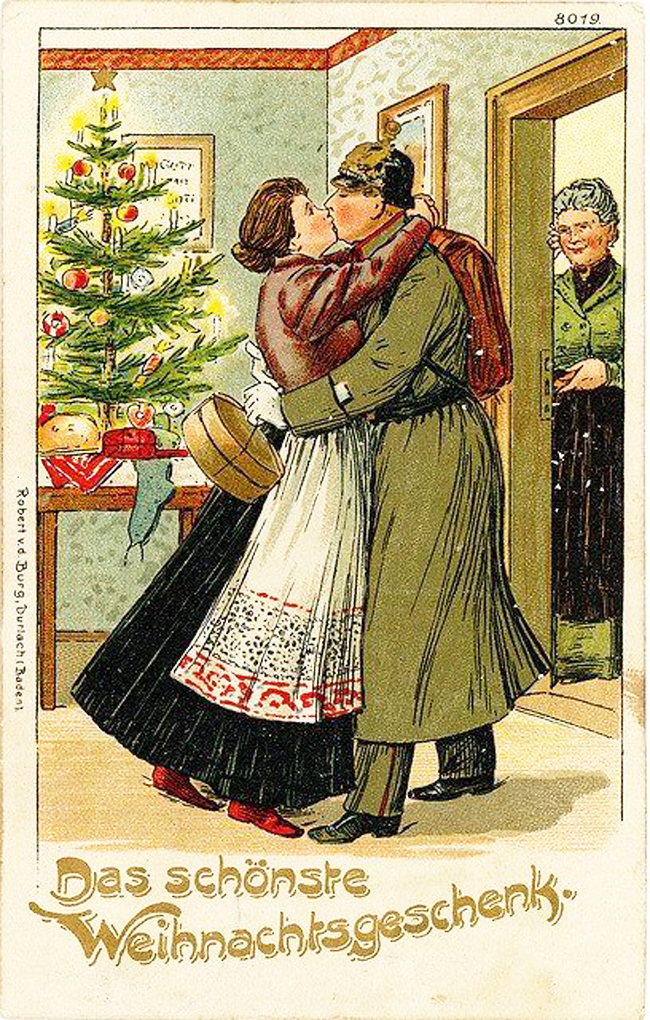 And this one from the Second World War shows children singing “O Tannenbaum” while the image of their absent father hangs over them. The caption reads” “Christmas Greetings From Home.” 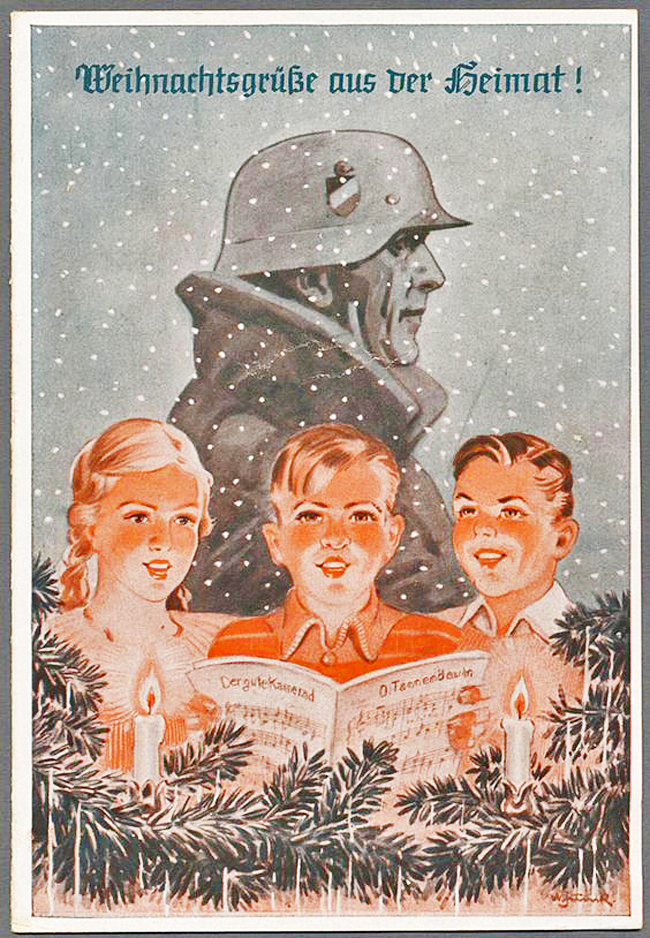 Here’s hoping you send and receive plenty of Christmas greetings this year. Merry Christmas and Happy New Year to all!