Arthur Bradford’s Spitfire was shot down over Normandy on D-Day, and he parachuted into the sea where he was promptly “rescued” by a landing craft, steaming towards the beach. He was unarmed, unprepared, and very, very unhappy. 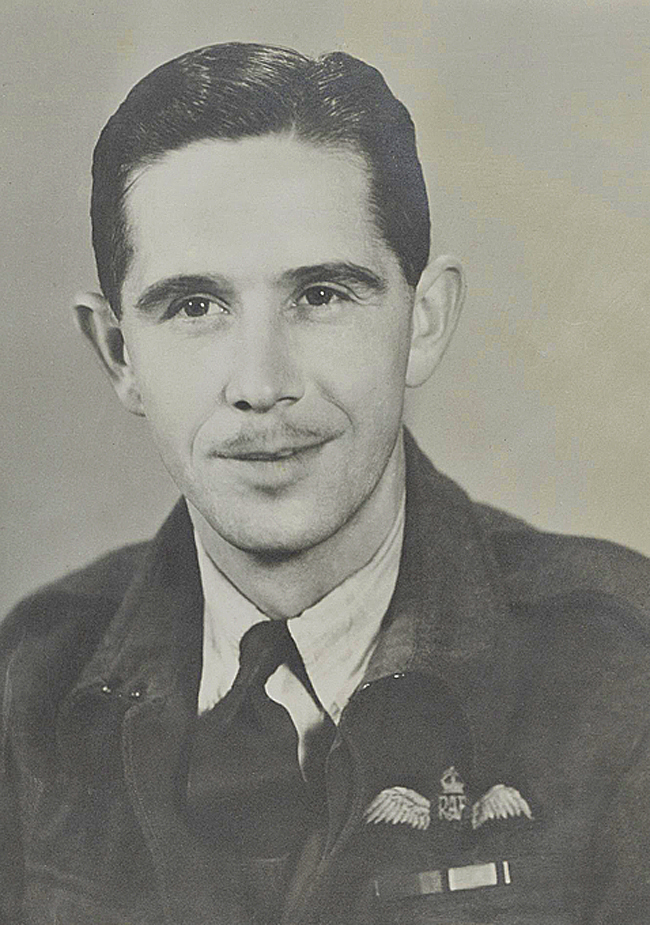 I interviewed Arthur Bradford at his comfortable lakeview home in Invermere, British Columbia before he passed away in 1999. He was short in stature, with twinkling eyes, a dry wit, and the typical British habit of understatement. His experience on D-Day must have been horrendous, but he made it sound like a piece of cake!

Arthur Thomas Bradford was born in Wales. In his usual self-deprecating style, he told me he didn’t want to go down the mines, so he attended university in Cardiff and became a teacher instead.

He moved to London and got a teaching job and, like all Welshmen, joined a rugby club. In 1938, he said some fellows came along and offered members of the club “Learn to Fly for Half A Crown.”

“This seemed like a good deal, so not suspecting what we were being trained for, we learned to fly.”

A year later, Arthur married an English girl and purchased a house outside Southampton. Here’s a photo of Arthur and his wife Trudie. Arthur’s parents are standing behind them.

In 1941 Arthur joined up and was sent to Penhold, Alberta to train as a fighter pilot, through the British Commonwealth Air Training Plan. On his return in 1942 he was stationed at RAF Biggin Hill, a fighter command air base near London.

Arthur was a pilot in the Royal Air Force, seconded to the Royal Canadian Air Force where he served with Squadron 401 (originally called No. 1 Squadron) and Squadron 410. In this group photograph of No. 1 Squadron, Arthur is standing behind the row of seated men, second from the left. 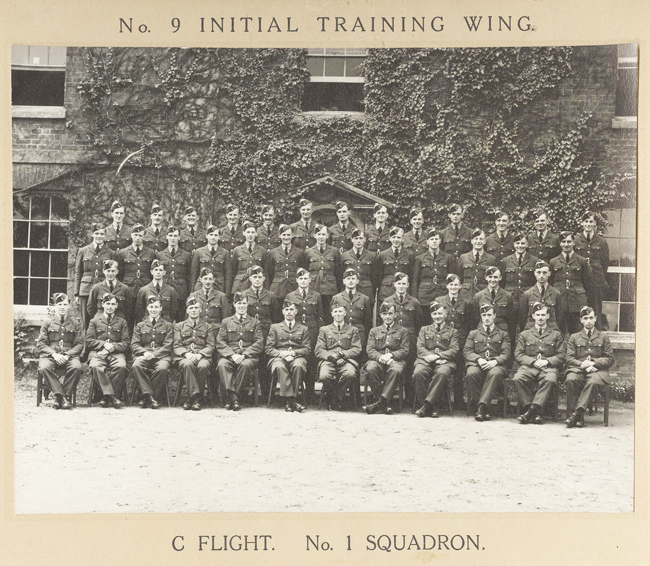 For the next couple of years, he was stationed at different air bases around England. He and his wife had a baby son named Michael, and they decided Southampton wasn’t safe. (It must have been awful for the fighting men to worry about the survival of their families as well.)

“Southampton got a terrible pounding. They were after the docks. Whenever the bombers went over to Manchester or another English city, they’d drop a few bombs on their way over and if they had any left on the way back, they’d drop them on Southampton.”

So Trudie took the baby boy and went to Wales, to live with the elder Bradfords, while Arthur continued to fly Spits. “They weren’t long range, but fortunately neither were the Messerschmitts.”

Finally, the Allies felt ready to wrest control of the European continent back from the Nazis. The secret plans had been months in the making. (To learn how the Allies fooled the Nazis about where the invasion would begin, click: D-Day: Decoys and Dummies).

As dawn broke on June 6th, 1944, Arthur was flying a last-minute reconnaissance mission over LeHavre, France. His aircraft was painted with black and white “invasion stripes.” This was a smart idea to distinguish the good guys from the bad guys. 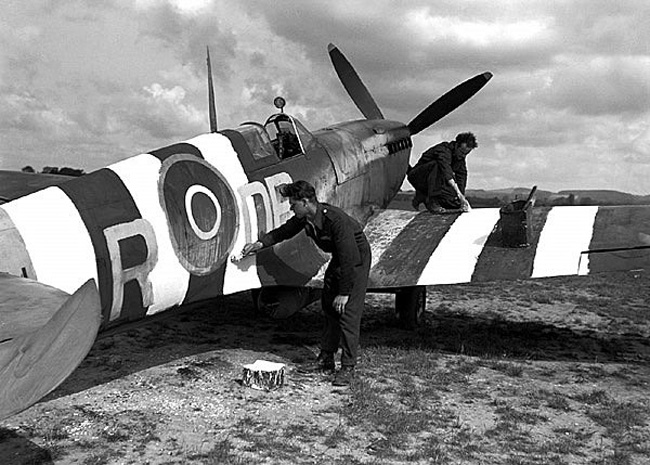 As the invasion began, Arthur flew over the English Channel, past masses of troop-carrying gliders being towed by Halifax bombers. From his cockpit window, he could see an armada of seven thousand ships approaching the French coast for the largest amphibious assault ever launched. This painting by Anthony Saunders depicts the fateful scene. 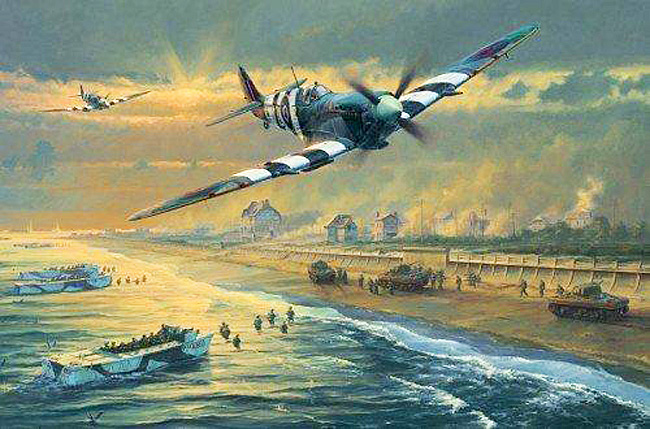 It was a thrilling experience, and he must have felt pretty safe up there, far away from the battle shaping up below.

And then his Spitfire was shot down by German anti-aircraft fire!

Fortunately, he had time to bail out over the Channel. Like all fighter pilots, he was wearing his bright yellow Mae West life jacket. (Allied aircrew called their inflatable life preservers “Mae Wests,” because it rhymes with “breasts” and resembled the actress’s ample torso.)

Also fortunately, he wasn’t in the water very long before a landing craft full of soldiers pulled him out, similar to the scene in this D-Day photograph.

Less fortunately, he was now on his way to invade France. 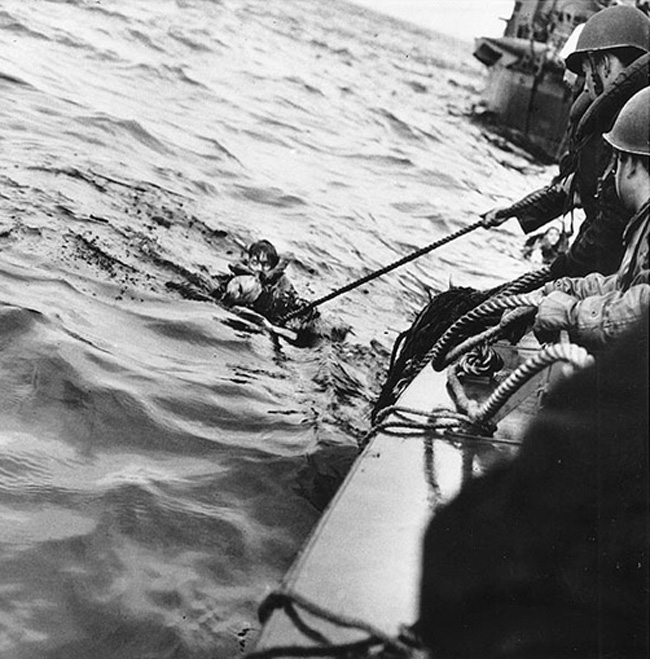 Can’t you just imagine the poor guy huddled in the landing craft with a bunch of fighting men armed with the best weapons, trained to storm the beaches and engage in hand-to-hand combat with the enemy? In this photo of American soldiers approaching Omaha Beach, you can see their camouflaged helmets, backpacks and rifles.

“I was the unhappiest man on the boat,” Arthur said. 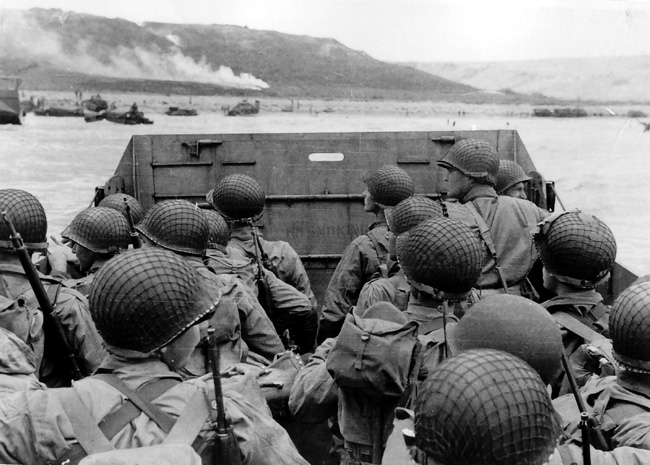 Already soaking wet and freezing, Arthur was ordered off the boat along with everyone else. He had NO unit, NO commanding officer, NO training for this type of combat, and NO weapon — except for a service revolver which all the pilots wore, in a clip stuck shut by salt water!

Here’s a photo of soldiers storming the beach.

Arthur, too, ran for his life. 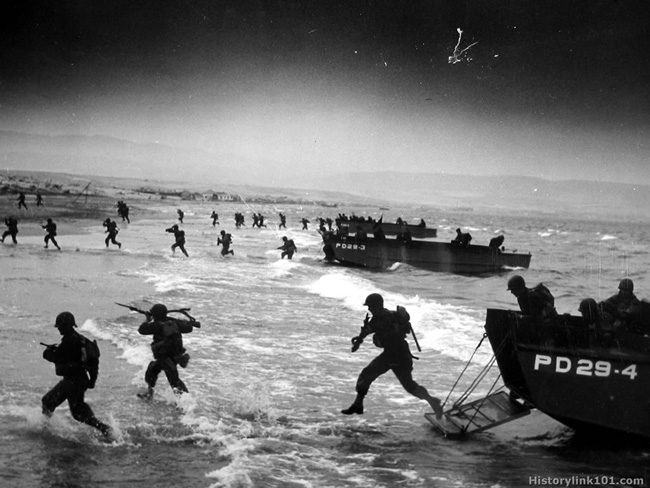 But he made no claims to bravery.

“I headed for a concrete wall and hid behind it for three days!”

Troops who landed on the beach were well-equipped with such items as a raincoat, chocolate bars, extra socks and extra ammunition. Arthur had none of these things.

The beaches were a scene of pandemonium. By sunset on June 6th, an incredible 175,000 British, American, Canadian and Free French troops had been carried across the English Channel to the Normandy Coast, in what was the largest amphibious landing the world had ever seen. 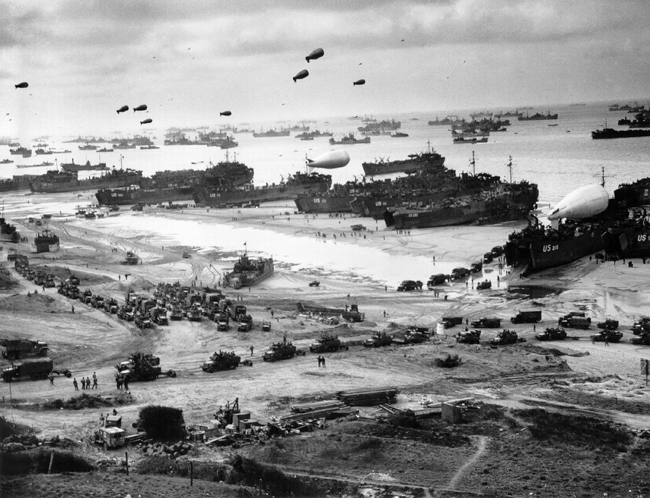 On the third day, June 8th, Arthur was finally picked up by a ship that was evacuating some of the wounded men.

Half-way across the English Channel it was torpedoed and sunk!

Once again, poor Arthur found himself in the drink.

For the second time in three days, he was pulled from the water by another vessel, this time heading back to England. And this time he safely reached Southampton.

He went straight to an officer and requested compassionate leave for being torpedoed.

“Torpedoed! Spitfire pilots don’t get torpedoed!” was the officer’s response.

After some heated discussion, Arthur got his leave and boarded a train for Wales, arriving in the middle of the night in a terrible rainstorm.

After walking a mile from the train station to his house, he knocked on the door and nobody answered. He threw pebbles against the window until his wife came downstairs and opened the door.

It wasn’t until he got inside that she burst into tears. She had already received a telegram saying that he was missing in action.

That first telegram has been lost, but here’s the second telegram informing Trudie that her husband is safe. Of course, Arthur was home before the telegram arrived.

“Your husband No. 1314081 Sergeant Arthur Thomas Bradford is now safe and uninjured and returned to the country. He was embarked in a vessel which sank at sea on 8 June as a result of enemy action. He should be able to communicate with you in due course.” 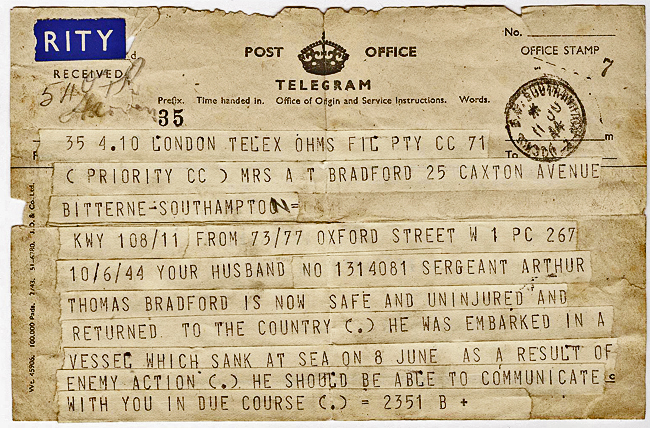 Arthur survived D-Day, but continued to lead a dangerous existence.

He returned to his squadron at RAF Tangmere, serving with a mixed bunch of Brits and Canadians. They were attached to the army, strafing in front of the advance and taking reconnaissance photos.

After the Allies successfully took back part of Europe, Arthur was stationed at Bayeaux in France, then Brussels in Belgium.

On New Year’s morning in 1945, his station at Brussels was attacked unexpectedly by German fighters. “We’d had a do in the mess the night before, and nobody was interested in flying,” he said. They lost three fighters on the ground trying to get up, but couldn’t manage it.

According to Arthur, this was the Luftwaffe’s last gasp. “By the time they finished, those fighters were out of ammo and almost out of fuel. We could see our guys already up in the air from other stations, just waiting for them over the Rhine. Not one of them made it back.”

Arthur continued to fly over Europe and ended up in Germany at a station called Stadthagen, near Aachen.

“We sometimes took over abandoned German airfields, but in this case the engineers had gone on ahead and made us a steel mesh runway. We were billeted in nearby homes abandoned by the Germans. I was in a schoolhouse.”

“One of our Canadian pilots had to return to Brussels for something. While he was there, the war ended. He wound his aircraft up to 25,000 feet to get the necessary range and then radioed the news to our station.

“Within an hour there was nothing left to drink in the mess!”

After the war, Arthur and his wife and son emigrated to Canada, where he worked as a teacher. His son Mike followed in his career path and was a school principal in Invermere until his retirement. Mike and his wife Rosemary had three daughters and one of the, Fiona Bradford, still lives in Invermere.

Every year on June 6, the anniversary of D-Day, I remember Arthur Bradford. I like to think he will observe the celebrations from somewhere high above, perhaps buzzing around in his Spitfire.

I have published Arthur Bradford’s story, along with twenty-seven other original stories from Wartime Wednesdays, in a printed anthology titled My Favourite Veterans: True Stories From World War Two’s Hometown Heroes. For more info, see the book cover image at the bottom of this page.

Here’s an image of a Canadian fighter pilot, dated August 22, 1942. My beef with this image is that the pilot looks too old – most of them were just boys. The Star Weekly was a Canadian newsmagazine published by the Toronto Star. During the Second World War, a colour illustration with a wartime theme appeared on the cover each week. To see my entire collection of Star Weekly covers, click: Star Weekly At War. 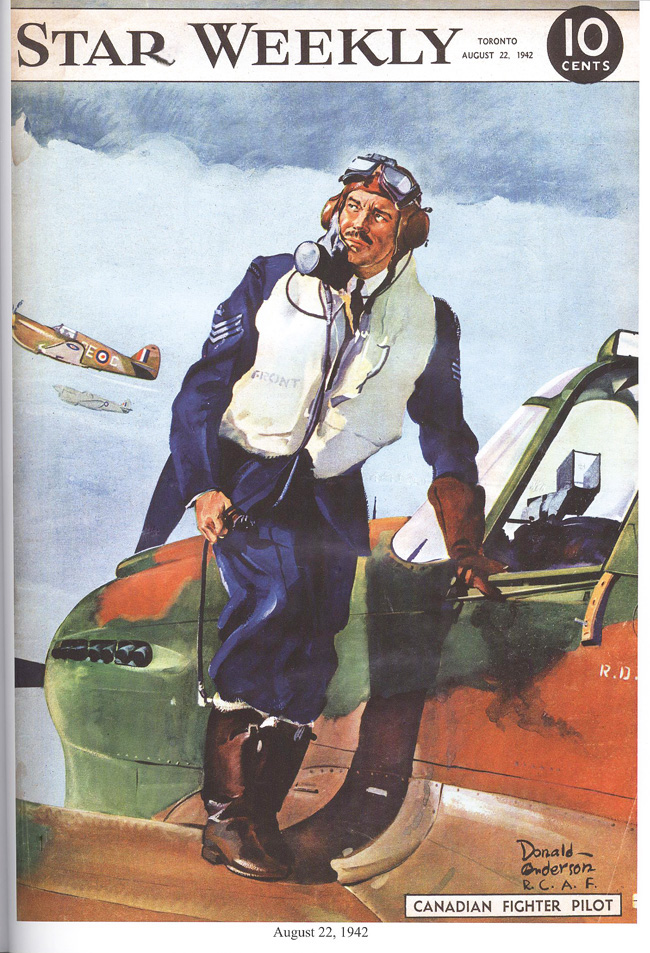