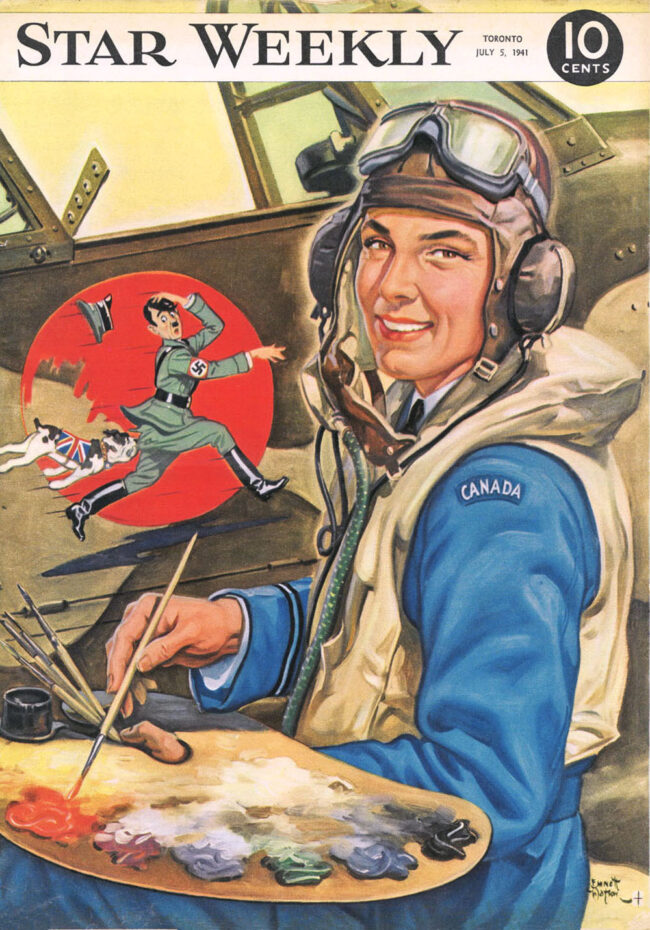 When Jim Watson recently found my website and contacted me, I was thrilled. I have published more than 80 Star Weekly covers on my website (see them here: Star Weekly At War). I love these striking images and I was happy to find someone who remembers the wonderful artists who created them.

Jim sent me some information about his grandfather, and we followed up with a telephone conversation from his home in New Jersey.

Now aged 75, Jim Watson grew up in Connecticut and served in Vietnam. After leaving the Navy, Jim earned his master’s degree in Statistics before he began his career as a statistician for the telephone company AT&T.

Since his retirement eight years ago, Jim has been diligently seeking out and preserving his grandfather’s art works — no small task, since the collection is so fragmented.

Jim was nine years old when his grandfather died, and he remembers him well. Since Jim’s family lived nearby, he visited the artist often. “He was always ready to drop everything and play with my brother and me,” Jim recalled. “He was a wonderful person with a great sense of humour. Since I have six grandchildren of my own, he’s my role model as a grandfather.”

Emmett Watson looks like a very kind grandfather in this photograph, doesn’t he? 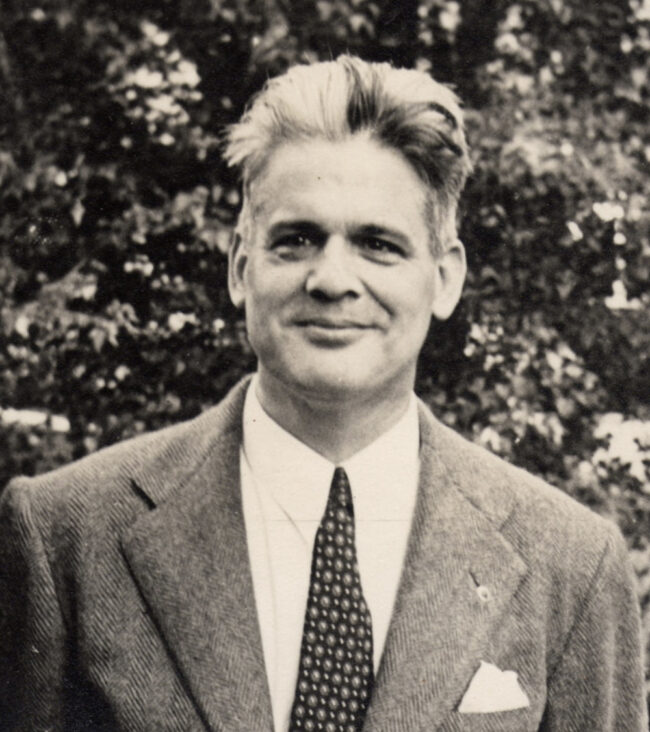 Emmett St. Clair Watson Junior was born in 1893 in Richmond, Virginia, one of seven siblings. By age thirteen, he was working full-time at a local engraving company that produced advertising. By 1910 (at the ripe old age of 17), he was a staff artist at the company.

During the First World War, Emmett served in France with the United States Army, in the 69th New York Infantry Regiment, using his artistic talent as a cartographer to draw maps. “I feel a deep sense of connection with him because we are both veterans,” Jim said. “I wish I could talk to him now about his wartime experiences.”

Emmett’s infantry was made famous by another regimental member, Joyce Kilmer (whose poem “Trees” we memorized in my one-room country school in Saskatchewan.) Kilmer wrote a celebrated poem titled “The Rouge Bouquet,” later included in a Hollywood motion picture titled The Fighting Sixty-Ninth, starring James Cagney.

The 1918 incident was also captured in a painting by Emmett Watson. Both the poem and the painting commemorate an intense German artillery bombardment of an American trench position in the Rouge Bouquet woods in France, resulting in the loss of 21 American soldiers. This is the well-known painting, demonstrating Emmett Watson’s emotional depth. 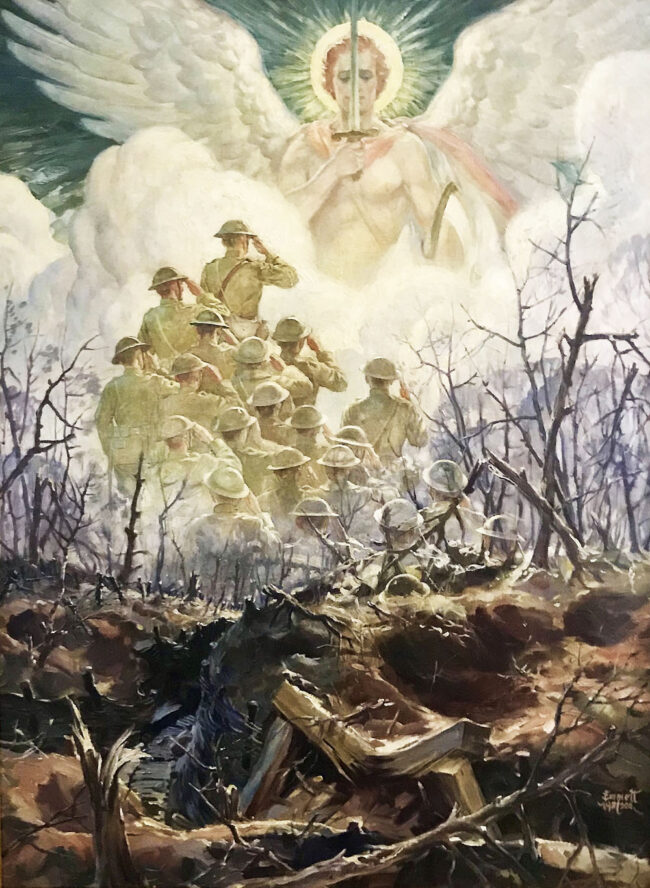 After World War One ended, Emmett returned to New York City, opened his own art studio, and began to sell drawings for magazine advertisements and story illustrations. He married Marguerite Marie Elliot and they had two children: son Emmett Watson born in 1922 (Jim’s father) and daughter Marguerite in 1925.

During the 1920s, Emmett was very successful, Jim explained, painting covers for glossy magazines called “slicks” such as Life, Judge, Colliers, and the American Legion Weekly.

But when the stock market crashed and the Depression arrived, Emmett was forced to work as a freelance illustrator for pulp magazines such as Detective Fiction Weekly. The “pulps” did not depend on advertising revenue, but instead sold cheap thrills to the masses.

“After he died, my grandmother was so embarrassed by some of these paintings that she thought were sleazy that she burned most of them!” Jim told me. “Ironically, it is those covers that are now most in demand by collectors.” 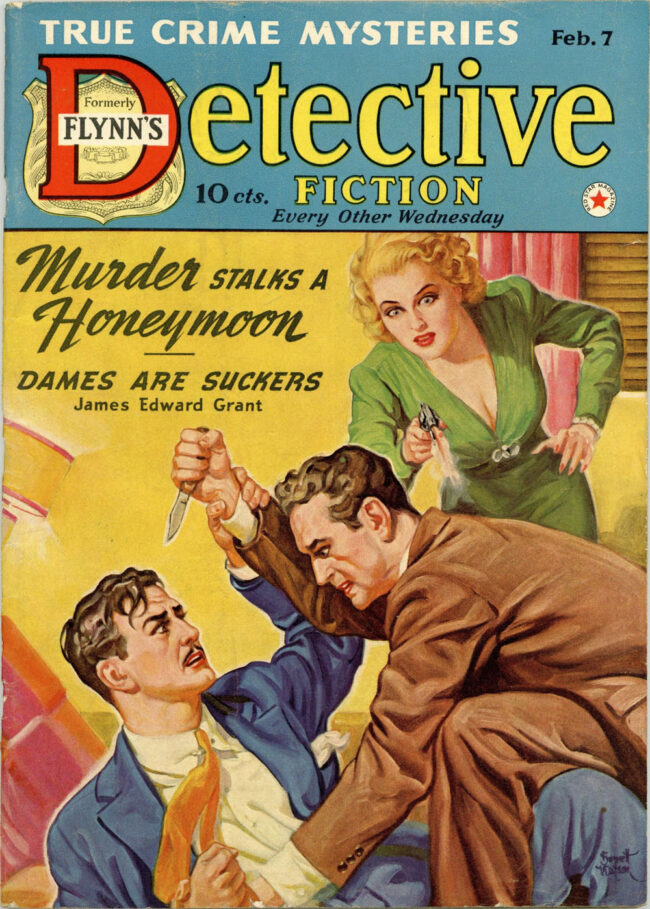 After the Second World War began in 1939, the economy grew stronger and Emmett returned to working for the higher-paying magazines, such as the Toronto Star and the hugely-successful Saturday Evening Post.

However, he never struck it rich. “I feel sorry because in spite of all his talent and his hard work, he only made a modest living,” Jim said.

Emmett was a very versatile artist, illustrating scenes of combat and home life with equal skill. Here’s a dramatic 1942 cover showing Britain’s advance into Libya. Note the lifelike detail in all of these covers. 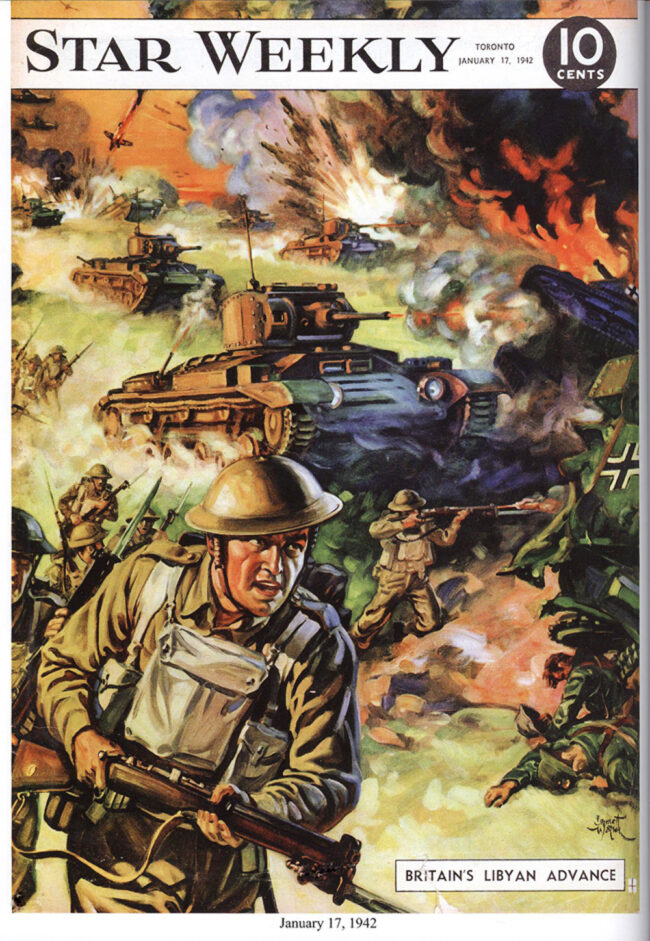 Here are a couple of covers showing Canadian servicemen going into battle. When creating illustrations for the Toronto Star Weekly, Emmett had to research Canadian uniforms to portray every element correctly. 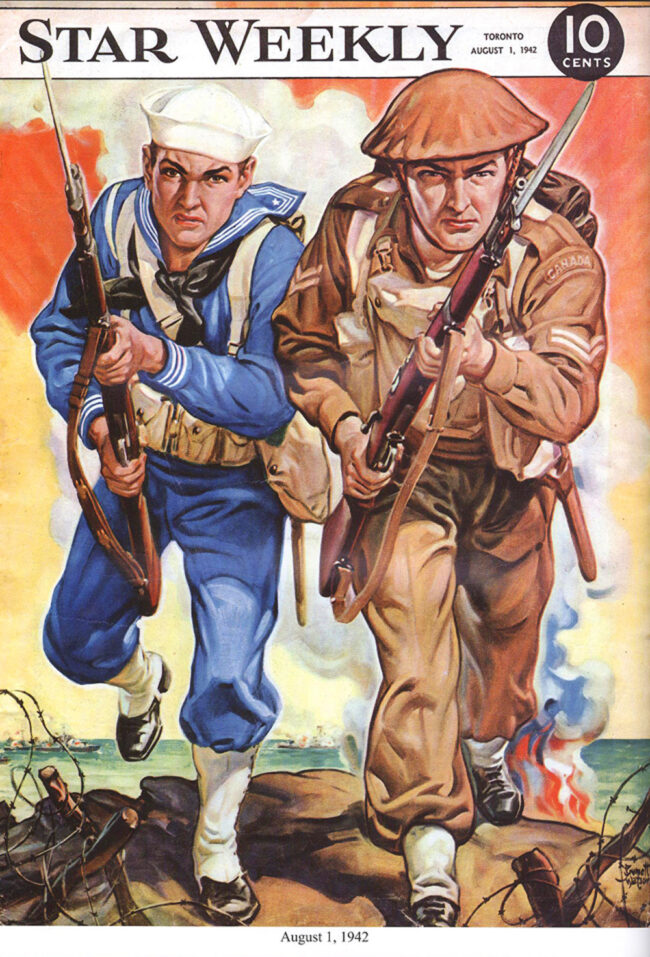 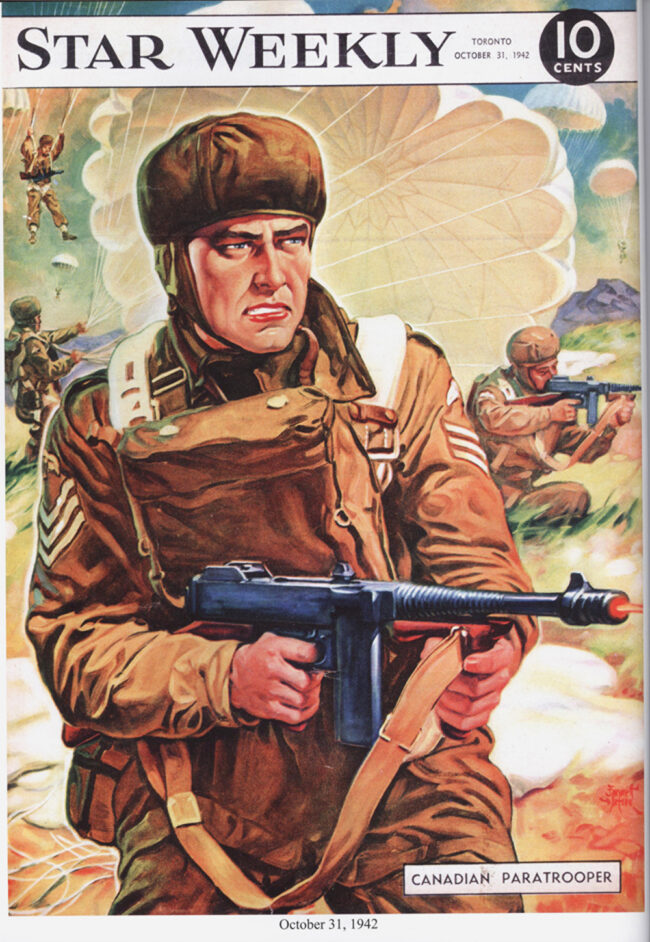 He created this cover showing a Russian cavalry attack, since Russia was an important wartime ally. Just look at the poor horse’s eyes and the froth coming from its mouth! 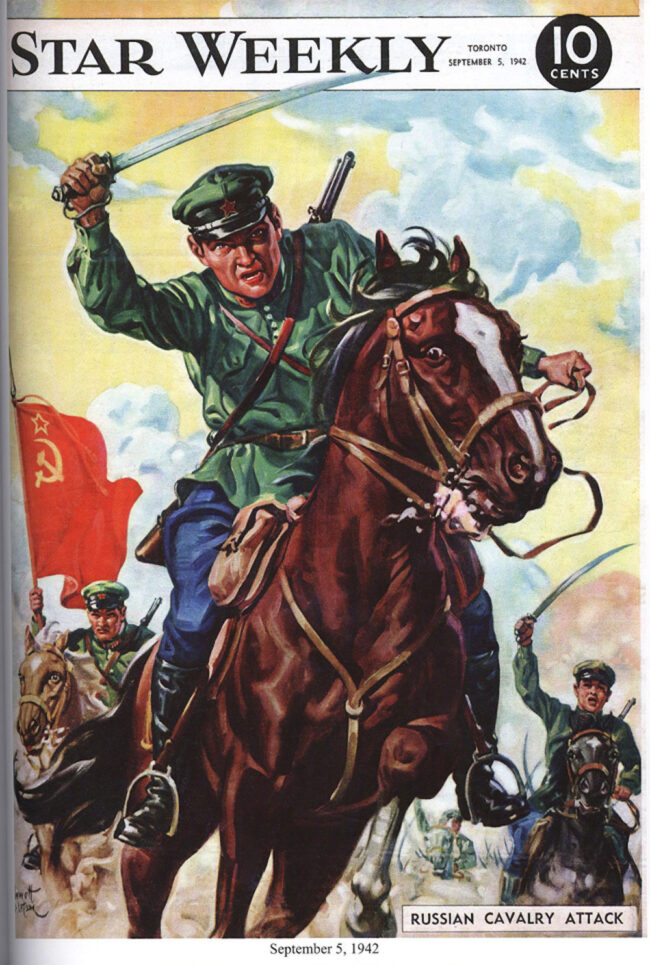 Emmett could also create scenes of great pathos. I find his covers so appealing because he could really tug at the heartstrings. The purpose of the Star Weekly covers — some people call them propaganda, but I prefer to think of them as morale boosters — were to bolster the spirits of the folks back home in Canada. Emmett understood how important this was, perhaps because he was a veteran himself.

Just look at this wonderful image of a Canadian airman receiving the news about his new baby boy! (Mail was vitally important in the Second World War. Read more about how the mail affected morale here: Mail Was Their Mission.) 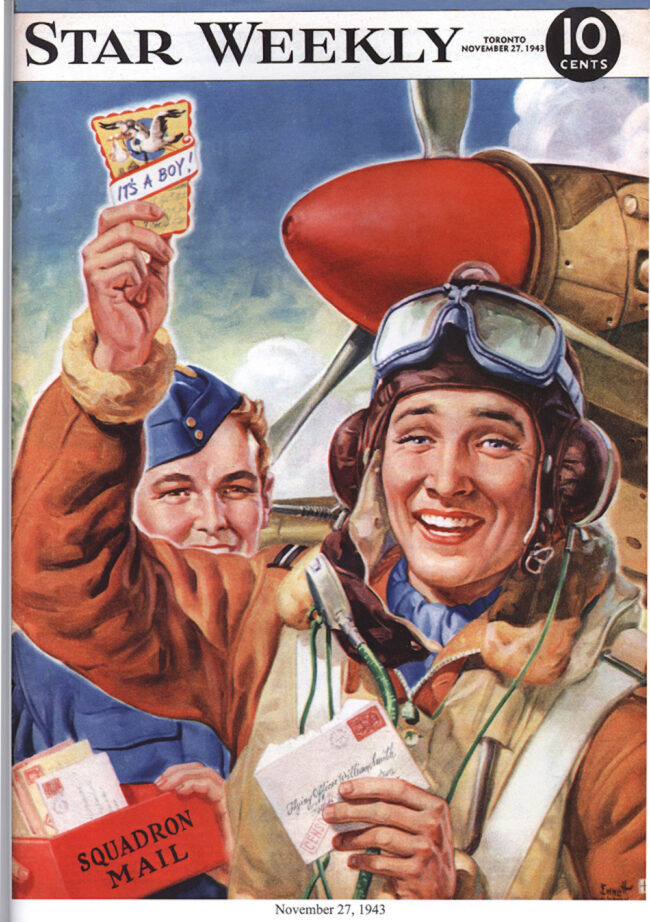 This darling picture shows a little nurse at work. (Kids also “did their bit” in the war effort, and you can read more here: Children on the Home Front.) 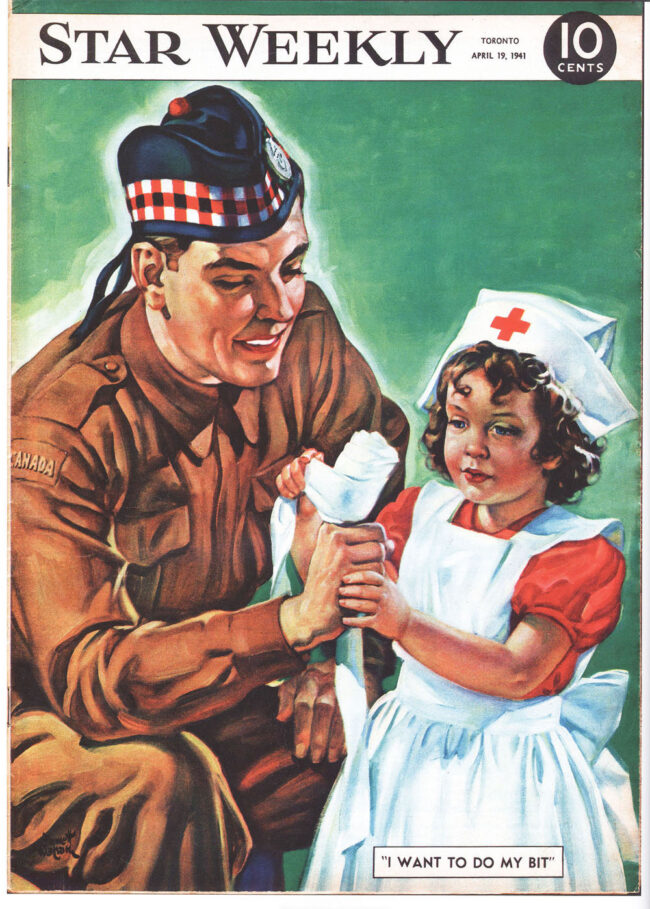 Emmett was particularly skilled at drawing children. It appears he may have used the same little girl as his model for both these covers.

Jim recalled: “When it came to people, he used his own family members as models. I recognize my own father and his sister in a few of them.” 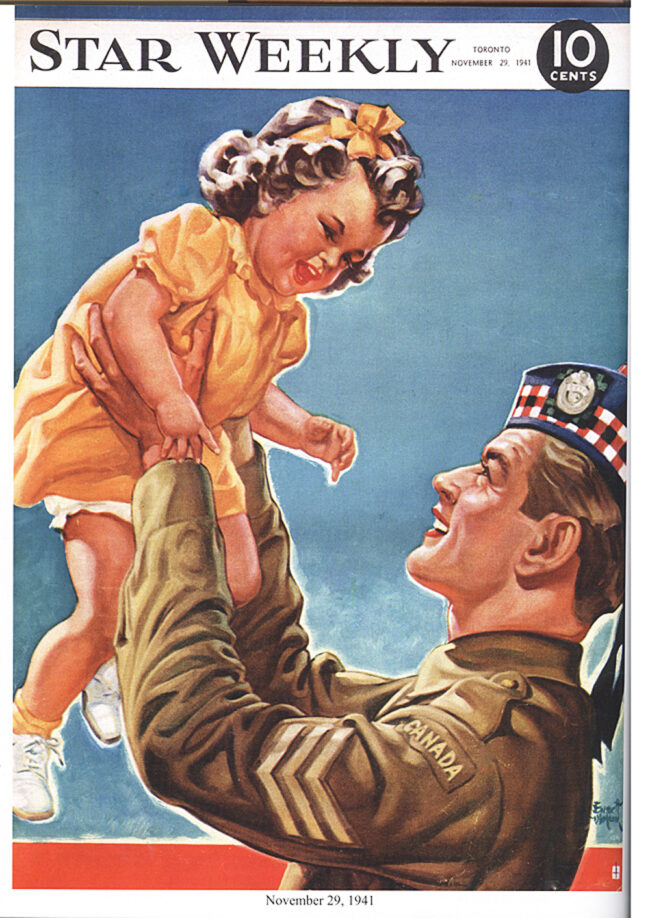 This image of a father and son was published on December 7, 1940, meaning that Emmett was working for the Star Weekly before the United States entered the war exactly one year later. 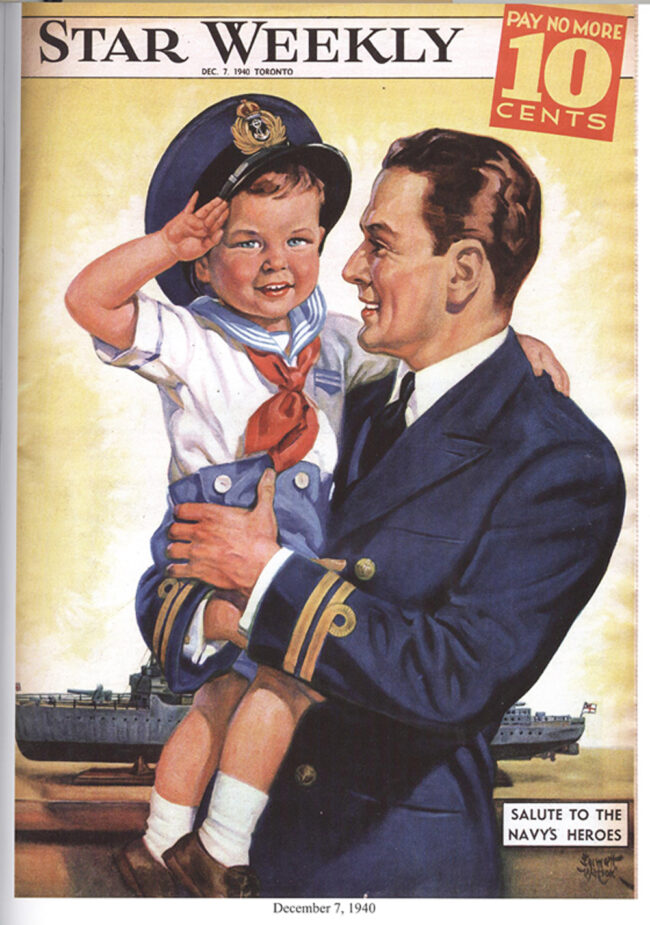 This Christmas cover appeared on December 20, 1941 — two weeks after the Japanese attack on Pearl Harbor launched the United States into the war — making it all the more poignant. 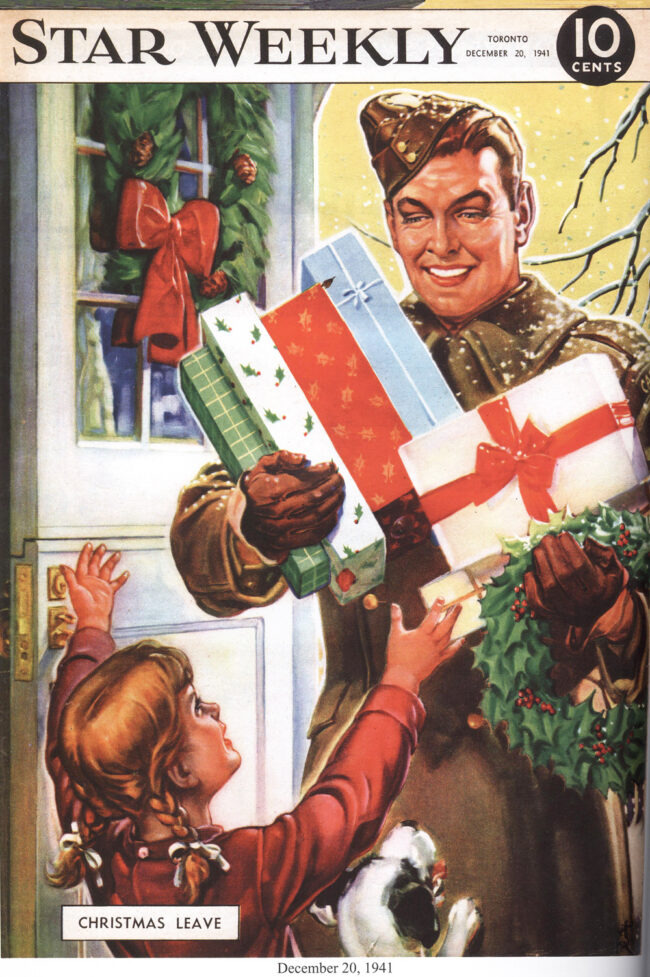 After the Second World War ended, Emmett continued to produce hunting and sporting illustrations for calendars, advertising, and magazines. He was a very prolific, hard-working artist who created hundreds of oil and watercolour paintings and pen and ink sketches.

Jim recalled: “When I knew him he had a studio, a room in his house, and it was a mess. There were piles of magazines and photographs everywhere.”

Emmett kept a large resource library because he needed the raw material. If he had to draw a wild animal, for example, he would have to work from photographs.

He created this earlier cover for The Saturday Evening Post, once found in almost every American and Canadian home. 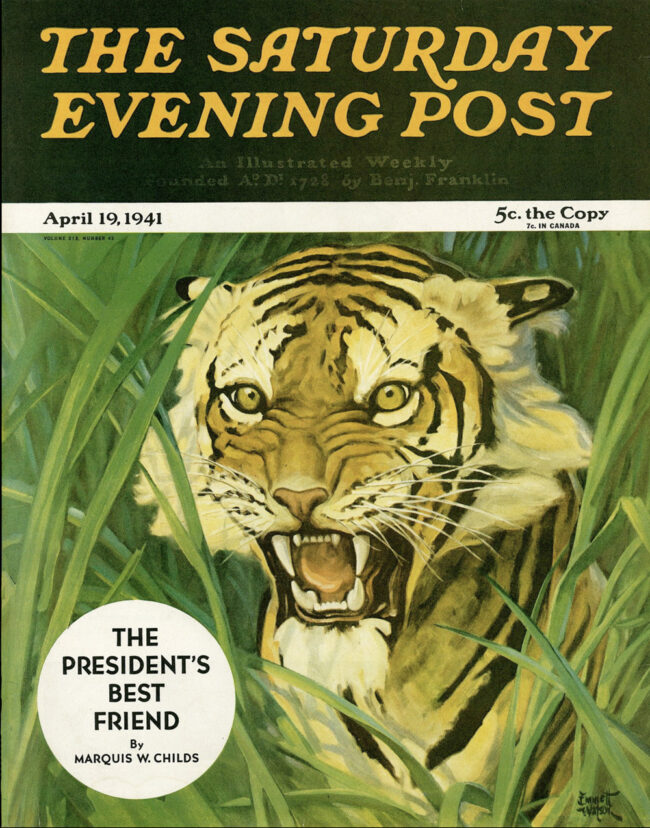 Obviously he had other clients in the Canadian market as well, as shown by this illustration of the iconic red-coated Mountie. 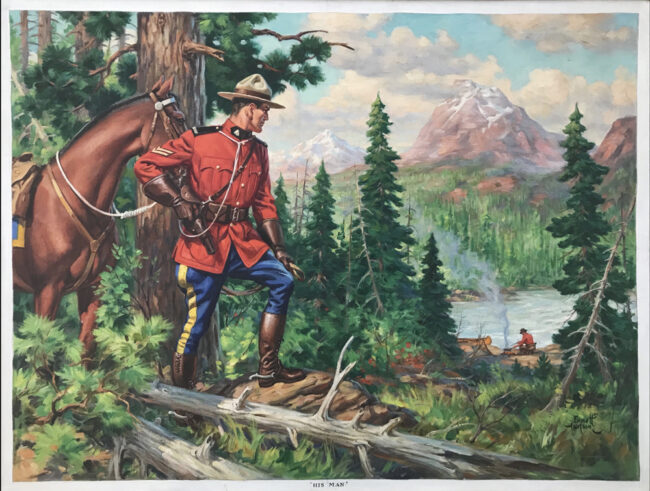 Since he retired, grandson Jim has been diligently combing online sales for his grandfather’s art work. He inherited about 30 original oil paintings from his aunt, but hundreds of others were retained by the publications that purchased them, eventually finding their way into private hands. These art works often turn up for sale on various websites — sometimes for thousands of dollars!

The Toronto Star, for example, never kept any of its own magazines — an oversight which seems thoughtless in the extreme.  However, Jim thinks that the company might have returned the original artworks to his grandfather, as he inherited several of them from his aunt.

“Unfortunately I’m not aware of everything he created, because there is no complete record,” Jim said. “I would love to hear from anyone who has an Emmett Watson work of art or even just a reproduction of a magazine cover or a calendar so I can cross-reference it with my collection.”

This photo shows Jim Watson with one of his grandfather’s paintings. Jim thinks it was created for the Toronto Star, but doesn’t know when or if it appeared in print. 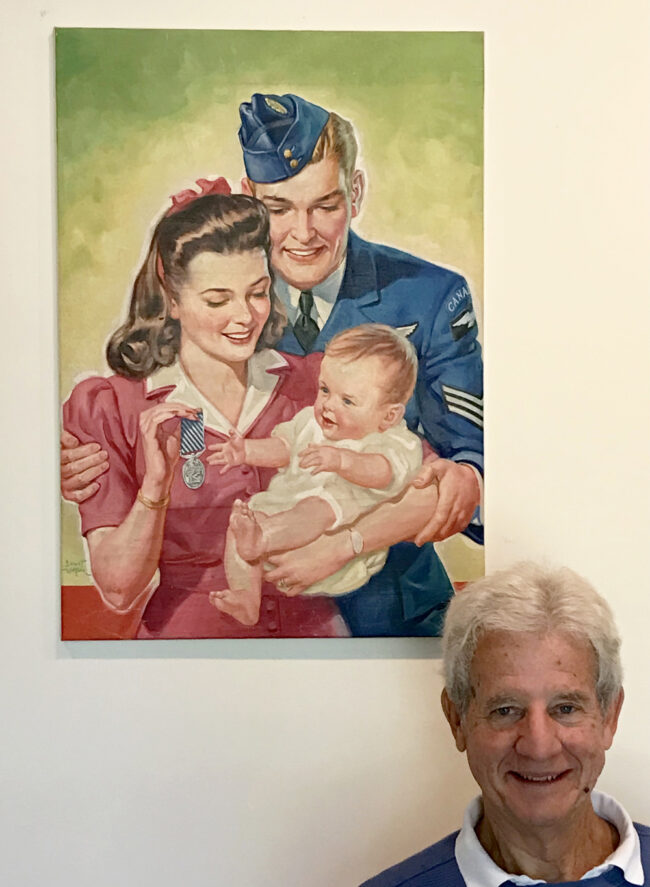 As part of his tremendous effort to preserve his grandfather’s legacy, he maintains a website where you can find many lovely illustrations: Emmett Watson’s Website.

Jim also wrote six children’s books — one for each of his grandchildren (one of them named Emmett) — and illustrated them with his grandfather’s works of art. The books are available from Amazon. He has also printed mugs, playing cards, and even leggings with Emmett Watson images, available for sale on his website here: Emmett Watson Merchandise. 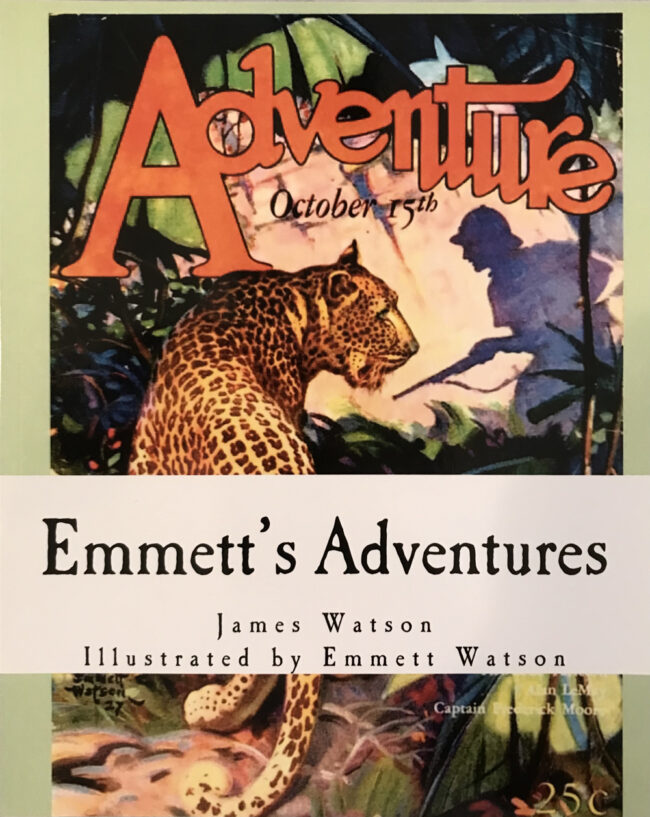 To help Jim in his quest, please contact either of us if you run across anything bearing Emmett Watson’s distinctive, spiky black signature! 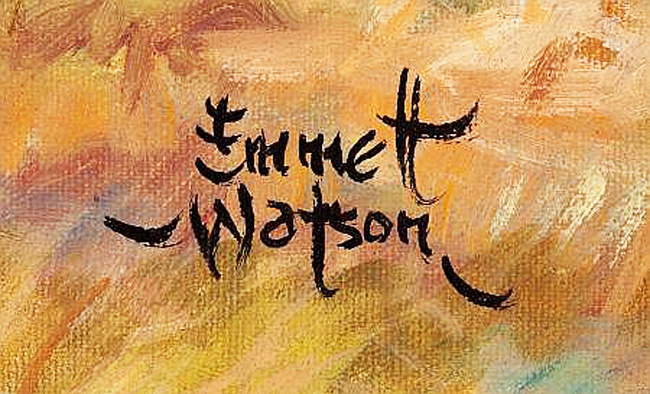 In conclusion, Jim isn’t the first person to find works by his artistic relative on my website. Several years ago, I was contacted by Sheree Meyer of Florida, whose great-aunt Elizabeth Cutler also illustrated covers for the Star Weekly. After I published a story about her, Sheree was sent a collection of her great-aunt’s oil paintings from a complete stranger!

Perhaps Jim will be lucky enough to locate some new works by this wonderful father, grandfather, war veteran, and talented artist: Emmett Watson.

Friends, feel free to browse many of the wartime interviews and stories posted on my website under the heading Wartime Wednesdays.

Here a few links you might find interesting. Check the index on the right side of this page for more fascinating stories.

I hope you will observe a very meaningful Remembrance Day.

Lest we forget, Elinor