Violet Milstead of Toronto was a ferry pilot, one of the elite few Canadian women who served with the Air Transport Auxiliary in Great Britain during the Second World War. She flew forty-seven different types of aircraft, including fighters and bombers, from factories to airfields. 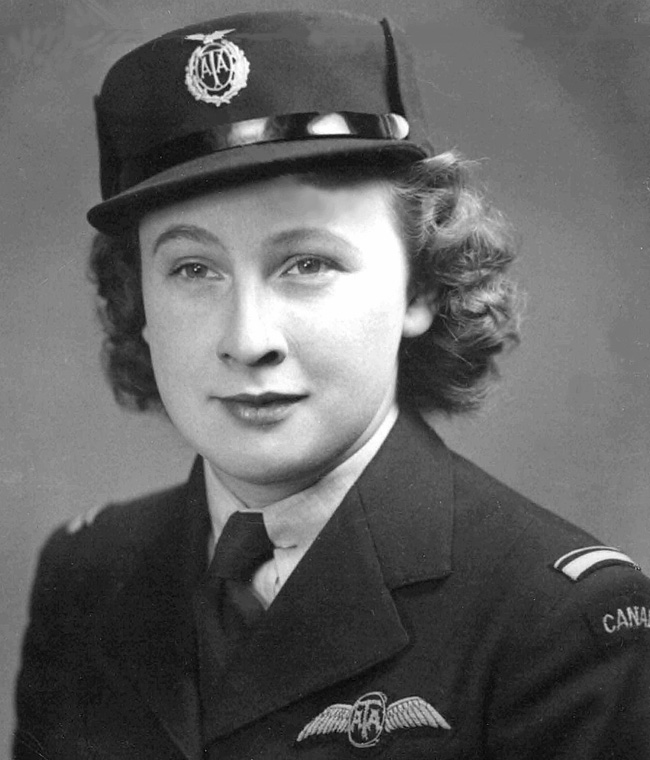 My guest post about Vi Milstead was prepared by the official historian for the Canadian Aviation Hall of Fame, John Chalmers of Edmonton.

Vi Milstead was born in Toronto on October 17, 1919. She was born to fly. She was a natural pilot, and when taken out of school at the age of fifteen, she worked long hours, six days a week in her mother’s wool shop, to pay for flying lessons, taking her first lesson on September 4, 1939 at the very beginning of the Second World War.

Here she is taking her first flying lessons. 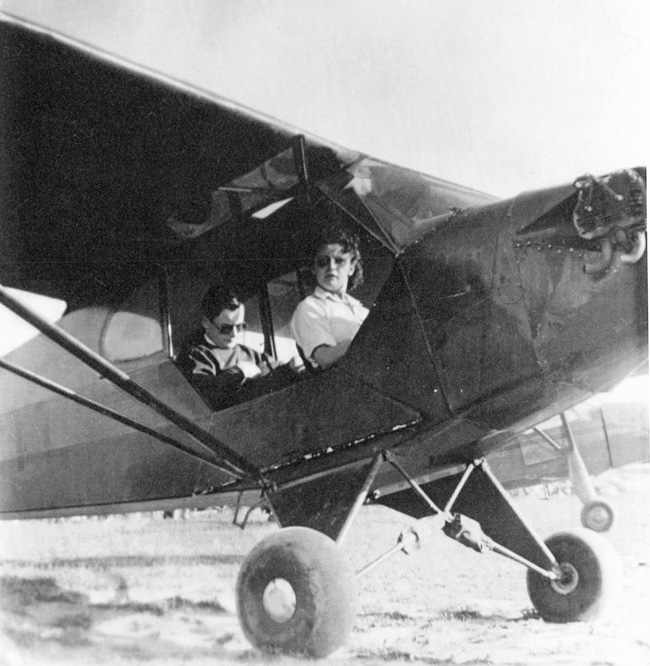 On December 14 of that year she passed her flight test and earned a private pilot’s license. At the age of 20 she opened her own business, operating her own wool shop to help finance her flying.

Three months after qualifying for her private licence, her passion for flying earned her a commercial licence. Soon she became the subject of a film by her instructor, Pat Patterson, who hoped to use the film to draw students to Patterson and Hill Aircraft, flying from Barker Field at Toronto.

When she received her instructor’s rating in July 1941, she was one of only five Canadian women to do so before the end of the war. She started as a flying instructor herself at Barker Field and some of her students would go on to serve their country in the RCAF during the Second World War.

Here she is in the role of instructor, teaching a young man how to fly. 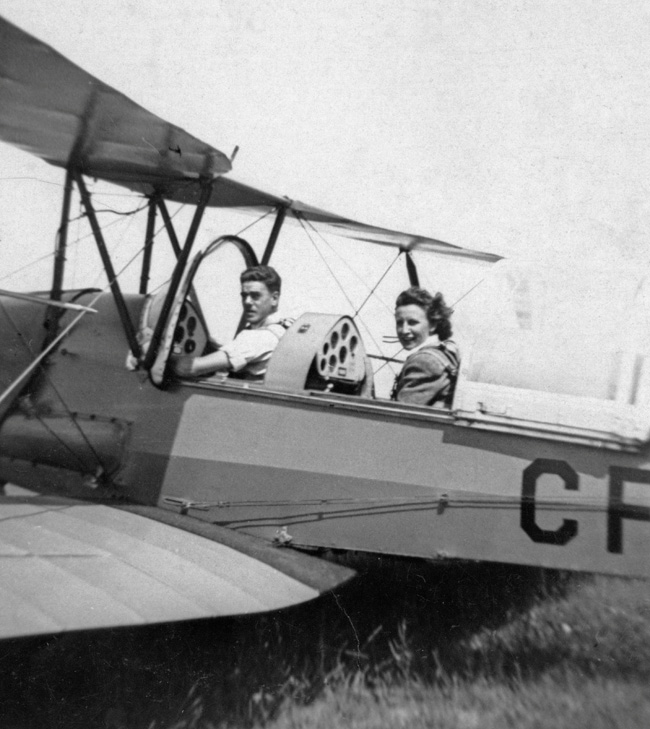 However, her wool shop closed in late 1942 and fuel rationing ended civilian flying training in November. In January 1943 Vi took her last flight and closed her civilian log book for the duration of the war.

Craving to fly, what was she to do? The answer was provided with an opportunity as a pilot for the Air Transport Authority (ATA), formed in May 1938 by the British Overseas Airways Corporation, later to become British Airways Limited.

The ATA was established as a civilian operation to ferry military aircraft within Great Britain. Originally, civilian pilots not eligible for military service were intended to fly light aircraft to transport mail, news dispatches, medical supplies, ambulance cases and VIPs in light aircraft.

But within six months, pilots were flying trainer aircraft, fighters and bombers from factories to airfields. Eventually over 1,200 pilots served with the ATA, including 168 women, of whom only a few were Canadians. Vi Milstead was one of them.

By then Vi had logged approximately 1,000 hours. At Montreal she was interviewed for the ATA and given a flight test in a Harvard by the RCAF. It was the most powerful aircraft she had flown to that time, and the first with a retractable undercarriage. Vi passed the test with “flying colours.”

Here is her official photograph for the Auxiliary Transport Association. 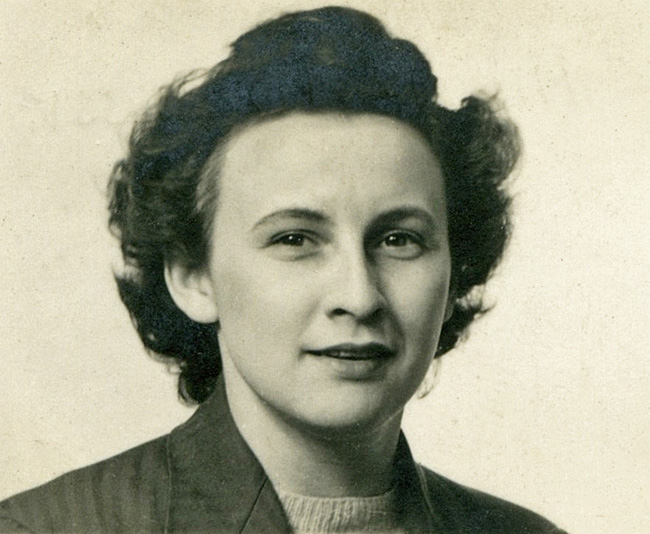 She and another pilot, Marion Orr, who become lifelong friends, passed the test and on April 19, 1943 they boarded a ship for England. Both women were destined to be inducted into Canada’s Aviation Hall of Fame. 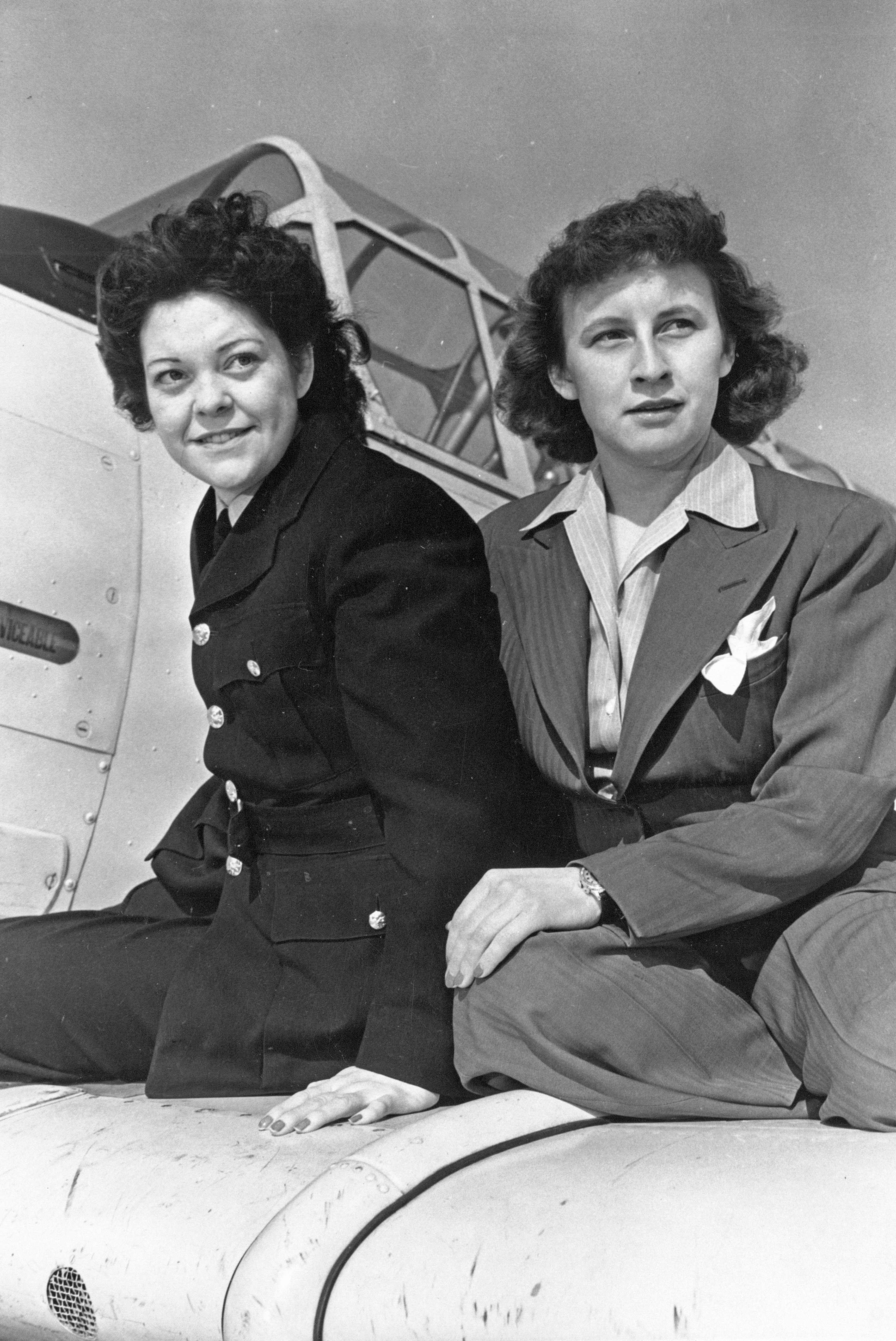 Pilots with the Air Transport Auxiliary progressed through a rigorous and thorough training program. First they were cadets, then were promoted to Third Officer upon completion of training. After only six days in that rank, Vi was posted for training on more complex aircraft and promoted to Second Officer. Soon she was trained to fly advanced twins and promoted to First Officer.

Here are Marian and Vi, looking very pleased to be wearing their smart new uniforms. 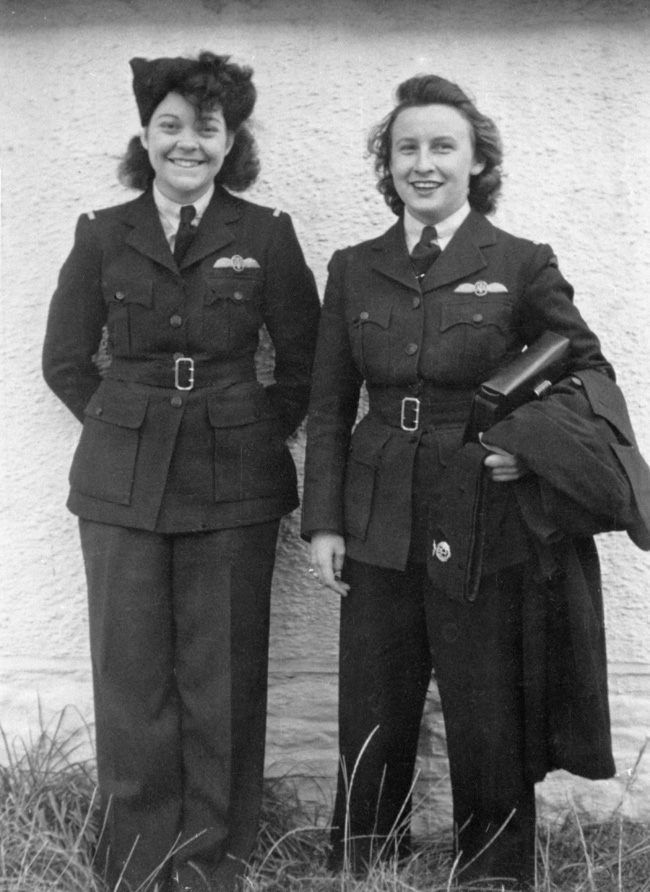 Ferry pilots were often called upon to fly any one of 147 different aircraft, often with no previous experience in a particular type.

Vi was a natural pilot and her petite size of five feet, two inches was no impediment to her skill at the controls of military aircraft. Apparently male pilots would “mock faint” when they saw her climb out of the cockpit.

Moving from single-engine trainers she was soon to fly much larger twin-engine aircraft, including the Beaufighter, Blenheim, Boston, Dakota, Hudson, Ventura and Whitley.

Here she is looking very tiny indeed with a group of other ferry pilots. This photograph was taken on Vi’s twenty-fourth birthday, possibly in London, on October 17, 1943. 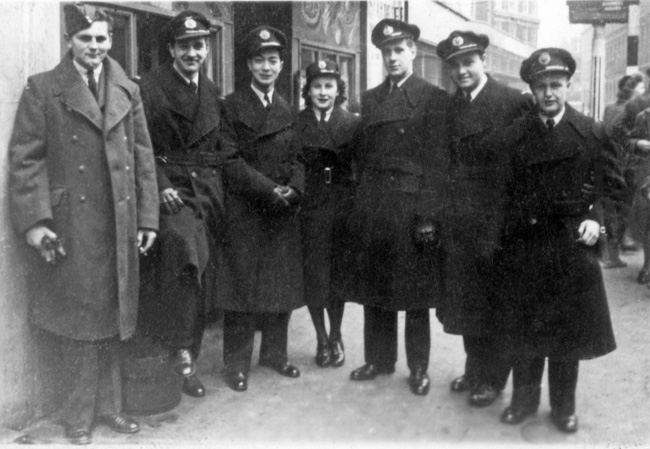 Aircraft she flew had distinguished records in the war, including Mitchell and Wellington bombers, and fighter aircraft such as the Spitfire, Hurricane and Mustang.

American aircraft she piloted included the Corsair, Wildcat, Hellcat and Typhoon. One that she considered the ultimate was the Hawker Tempest, with its powerful 24-cylinder engine that cranked out 2,800 horsepower, but her sentimental favorite was the twin-engine De Havilland Mosquito.

Here she is with her favourite aircraft, the Mosquito. 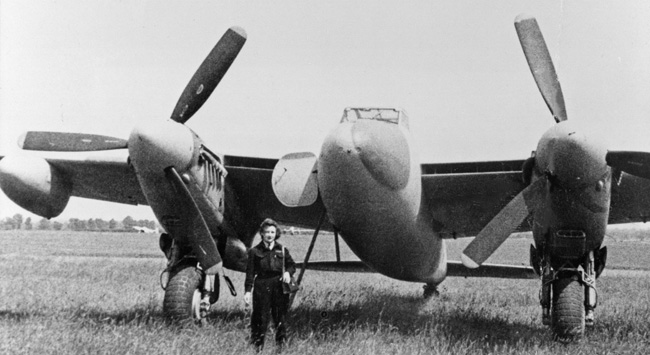 Sometimes Vi’s first flight would be her first solo in a particular type. From April 5, 1943 to the last of her ATA flights on July 31, 1945, she flew 47 different makes of aircraft, logging 623 hours.

She had leave, of course, and here she is relaxing beside a charming English house, seizing the opportunity to read a book. 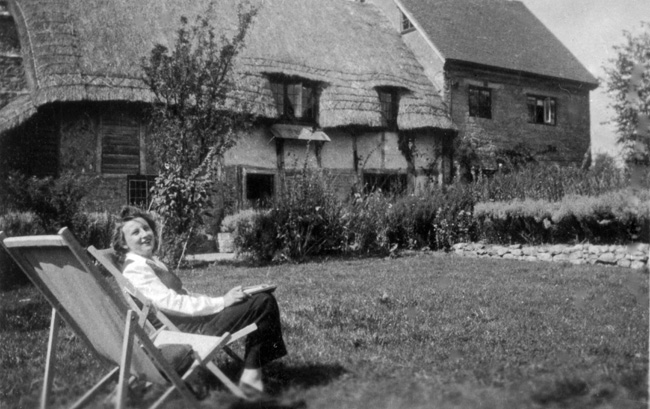 Vi was the longest serving Canadian woman pilot with the ATA, achieving the highest rank, and flying more hours than any other woman pilot. Here she is with two of her fellow female pilots, Virginia Farr on the left, and an unidentified woman on the right. 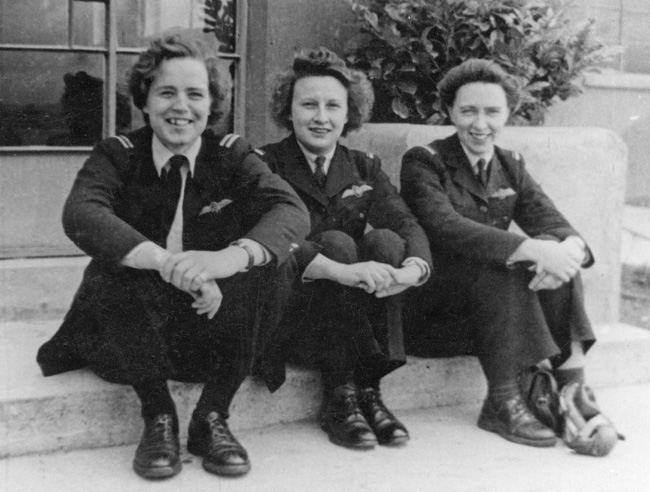 Following service with the Air Transport Auxiliary, Vi returned to Canada and looked for a flying job. Instructing continued to be the main flying position open to women, but there was lots of competition for those jobs.

Initially she worked at Leavens Brothers, flying again from Barker Field, and it was there that Vi Milstead met Arnold Warren, who was to become her husband.

Here she is shown in a Chipmunk. 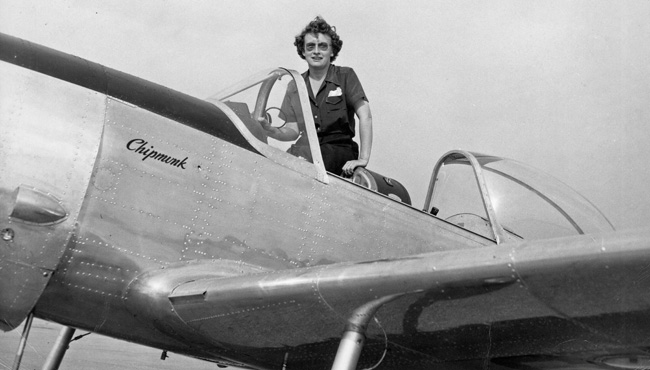 In 1947 she and Arnold began work for Nickel Belt Airways of Sudbury and Vi became one of Canada’s first female bush pilots.

During her bush pilot days, she looked suitably dressed in a plaid jacket. 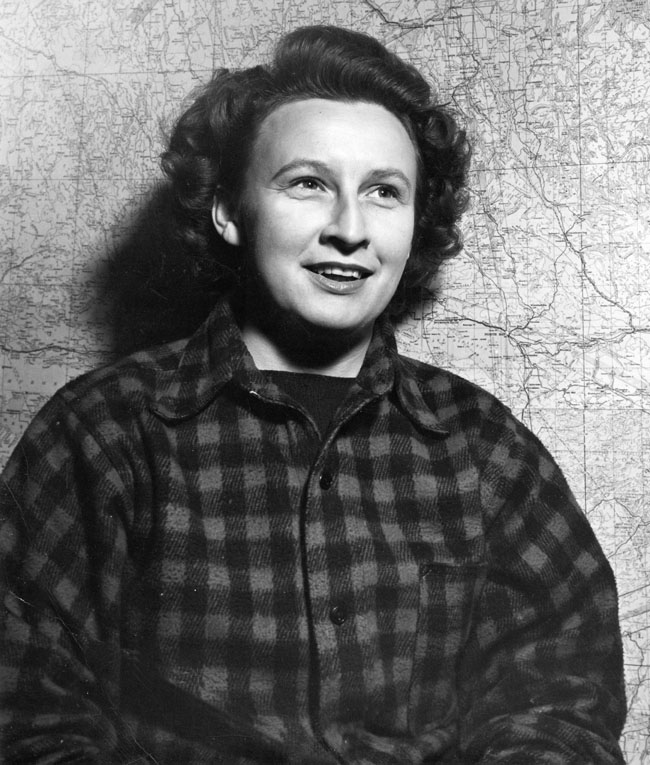 In this capacity she flew bush planes such as the Fairchild Husky and Fleet Canuck on floats, taking prospectors, miners, lumber personnel, hunters and fishermen in and out of camps in northern Ontario. Her job also included spotting and reporting forest fires and taking men to combat fires.

This photo shows her servicing a Fairchild Husky, one of only 12 built, while she was flying with Nickel Belt Airways of Sudbury, Ontario. 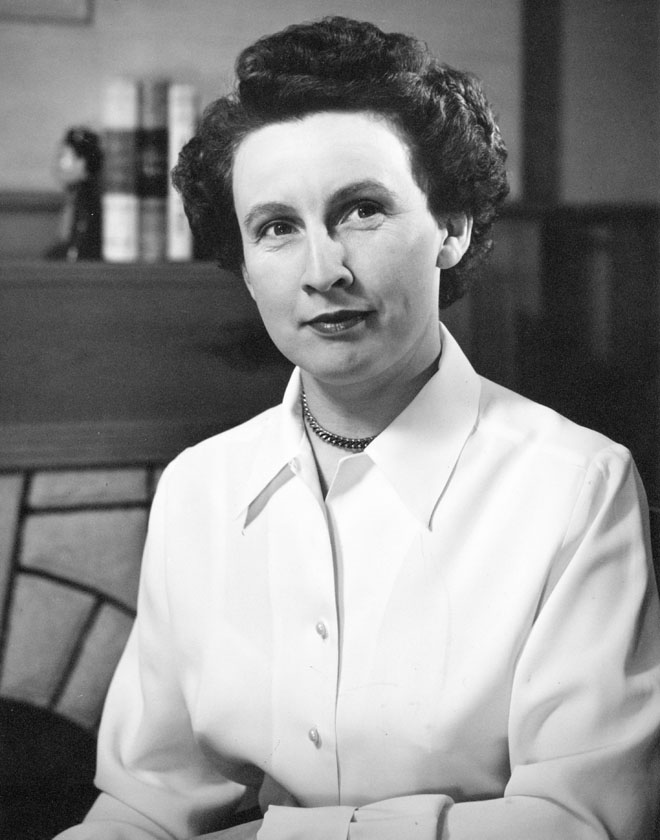 In 1950, Vi and Arnold were invited to Windsor, Ontario to reactivate the Windsor Flying Club.

In 1952, Arnold was contracted to train pilots in Indonesia and during her time there with him, Vi provided private lessons to aspiring pilots. It was Arnold himself who took this very lovely photograph of his accomplished wife. 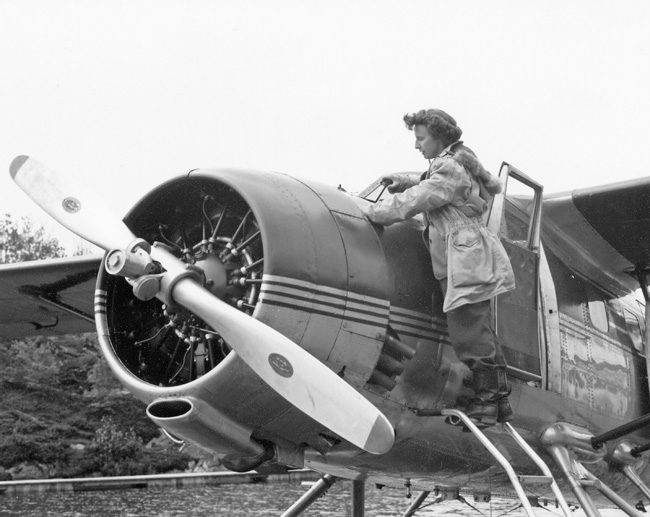 Back in Canada, she and Arnold sought more conventional jobs and in 1955 Vi obtained a position with Orenda Engines in Toronto, serving as secretary to Alan Wingate, an RCAF veteran whom Vi had taught to fly in 1941.

Later, Vi moved to the Ontario Water Commission where she worked until retiring in 1973. After retirement she and Arnold continued to fly in their own aircraft, a Piper Cub and later a Mooney.

Vi Milstead Warren served as a wartime ferry pilot, as a commercial pilot, and as an instructor when it was rare for women to fly in any of those capacities. She is the fourth pilot who served with the ATA to be inducted into Canada’s Aviation Hall of Fame. Her lifelong friend Marion Orr was admitted in 1982; Helen Bristol was inducted in 1974; English-born Vera Dowling was inducted in 2000.

Other honours have also been bestowed upon Vi. In 1978 the East Canada Section of the Ninety-Nines (a women’s aviation organization) awarded her the Amelia Earhart Medallion for contributions to aviation.

In 1995, the Rusty Blakey Heritage Group in Sudbury celebrated her work as a bush pilot. In 1996, her work as an ATA pilot was documented in a film, A Time For Courage, produced by Cooper Rock Pictures.

In 2004 she was inducted as a Member of the Order of Canada. Here she is with Adrienne Clarkson, Governor-General. 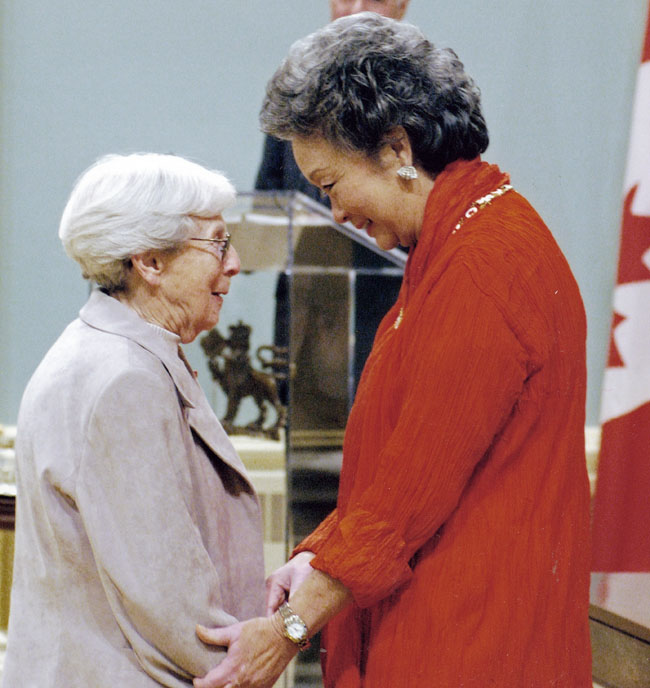 In 2010, Vi Milstead Warren was inducted as a Member of Canada’s Aviation Hall of Fame. The citation for her induction reads:

“During the Second World War she served with the Air Transport Auxiliary in Great Britain, flying 47 different types of aircraft, including trainers, fighters and bombers from factories to airfields as the longest serving Canadian woman pilot with the ATA. Post-war, she flew as a flying instructor and as one of Canada’s first female bush pilots, a role model for women seeking careers in aviation.”

As reported in the The Globe and Mail newspaper: “To celebrate her 85th birthday, her friend and biographer Marilyn Dickson took her out for a plane ride. The octogenarian confidently took control and did most of the flying. Ms. Warren was 94 when she died on June 27, 2014 at her home in Colborne, Ontario.”

Vi Milstead Warren has served as a role model for women in aviation. Her accomplishments are a credit to her character and her skill as a pilot, and are an inspiration to those who would follow in her flight paths.

John Chalmers of Edmonton serves as Historian for Canada’s Aviation Hall of Fame and membership Secretary for the Canadian Aviation Historical Society. Thank you, John, for sharing this story, and for your ongoing efforts to preserve aviation history! 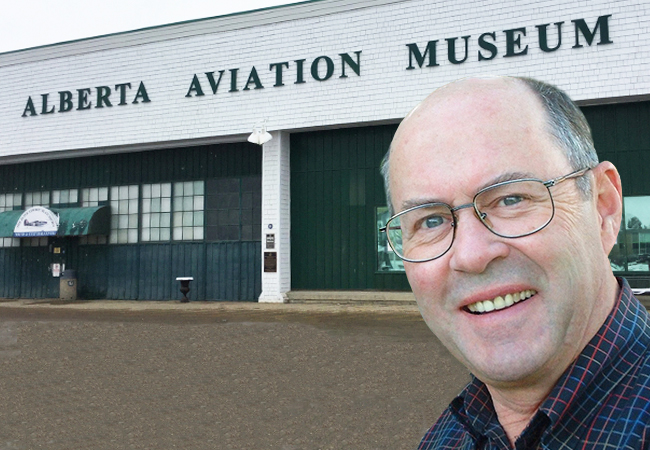 This isn’t the usual Star Weekly cover, but I couldn’t resist the loveliness of this illustration by Fitz Boynton of a woman flyer in her leather helmet and goggles, titled Aviatrix. 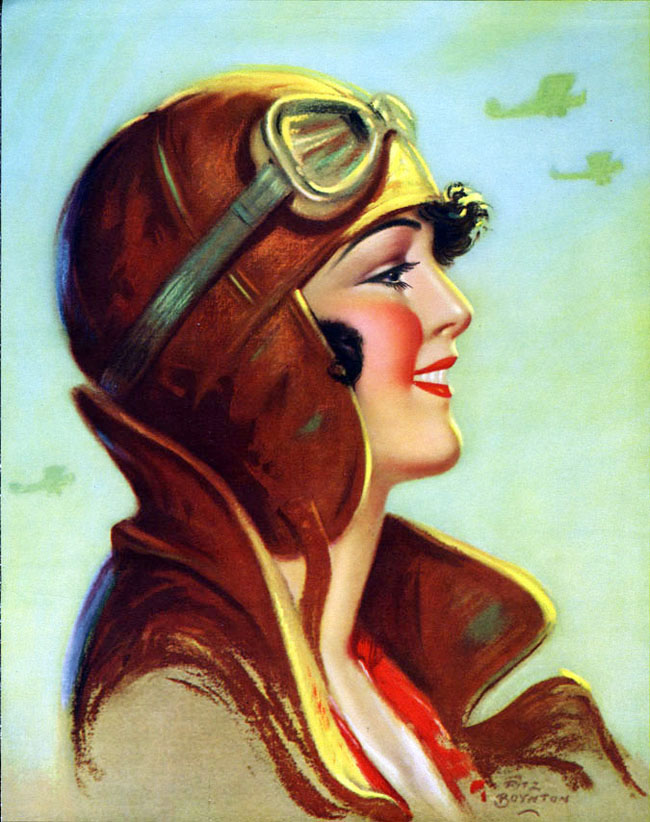