What if you weren’t allowed to buy gas or tires for your car — or even a new car? That was the case for thousands of Canadians, who were saving fuel for the war effort during the war. Even riding alone in a vehicle was considered almost criminal. 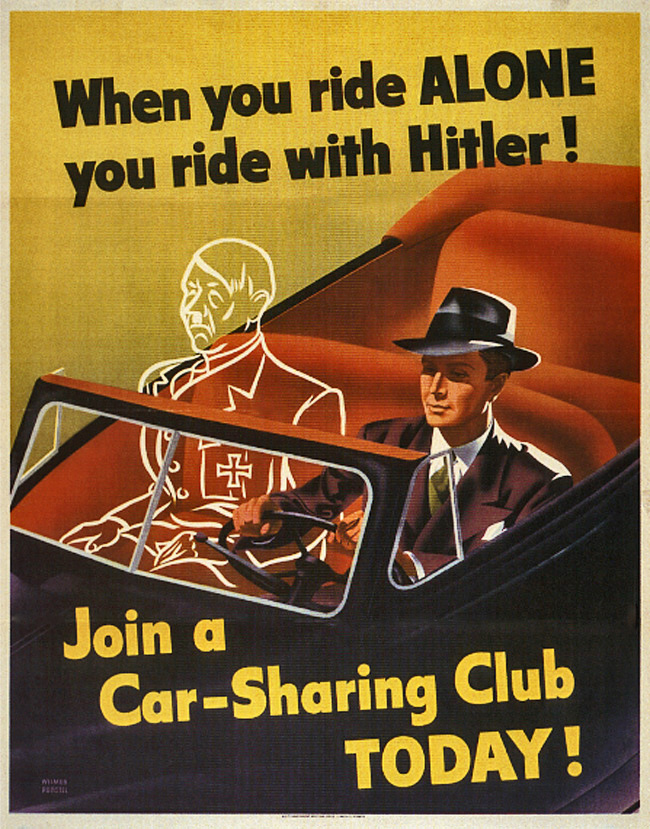 When World War Two was declared in 1939, Great Britain began rationing “petrol” almost immediately. Not only was every drop of fuel needed for military vehicles, but the blockade of the Atlantic by German submarines meant it was difficult to import fuel and everything else.

Once again, I’m reminded how much more deprivation the British people suffered than we did here in North America.

At first, Canadians reduced their gas consumption voluntarily. Then gasoline rationing began in April 1942, and that was followed one month later by the United States.

On the last day before strict rationing took effect, car owners lined up their empty vehicles at local stations. (It seems to defeat the purpose, but I understand why drivers would want to purchase every drop while they still had the chance.)

Here’s a photo of cars in Washington, D.C. parked in front of gas stations long before they opened, waiting to fill their tanks on the quota of their old ration cards. Cars were parked and left without their drivers, who returned at eight o’clock in the morning when the gas station opened for business. 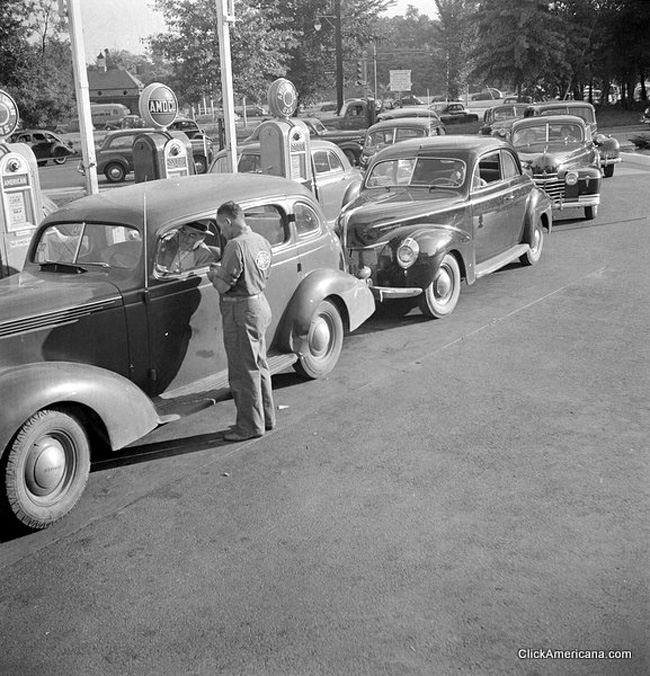 Just like those for food, ration books were issued, and each time you filled up in Canada you had to fork over a number of your precious gasoline coupons.

And I do mean precious. Owners of non-essential vehicles were allowed just 120 gallons of gas a year. Back then, when cars were more fuel-efficient, this was the estimated equivalent of 2,000 miles! This gas ration book is from the Ontario Archives.

When gas rations took effect in Canada, some people simply put their cars in storage for the rest of the war. One of them was my grandfather Charlie Light, who walked two miles every day from his home on the edge of Battleford, Saskatchewan, to his job as postmaster at the Battleford Post Office.

His wife and five children walked everywhere as well. I can’t help thinking how very healthy and fit they must have been!

Here’s a photo of the car, with my grandfather and three children, taken in 1928. It was already quite old by today’s standards when he parked it in 1942, and even older when the war ended. 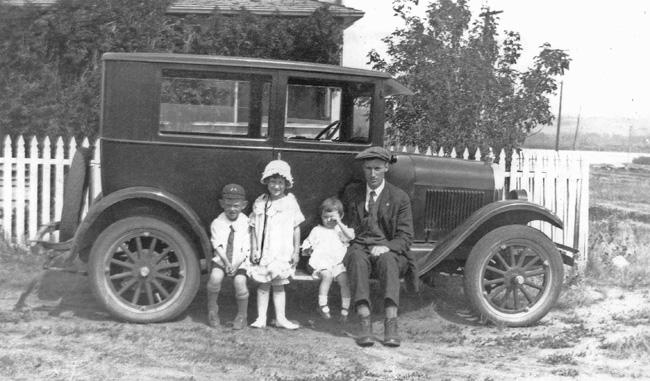 Walking was encouraged in a big way, and not for the sake of fitness. Here’s a poster from Britain urging people to use “shanks’ pony,” which is an old-fashioned term for walking. 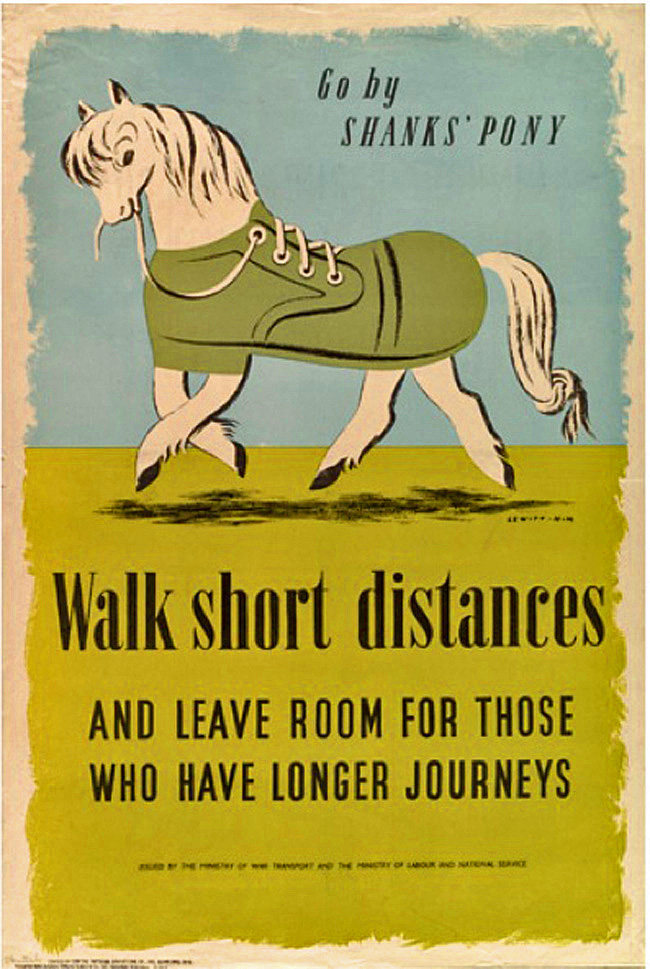 Here’s a poster from the American Legion, urging housewives to carry their groceries rather than driving them home. As usual, the Americans were particularly good at creating some very artistic posters to deliver the message.

In spite of their willingness to help the fighting men, it must have been a hardship for mothers with young children, or elderly people, to walk everywhere. 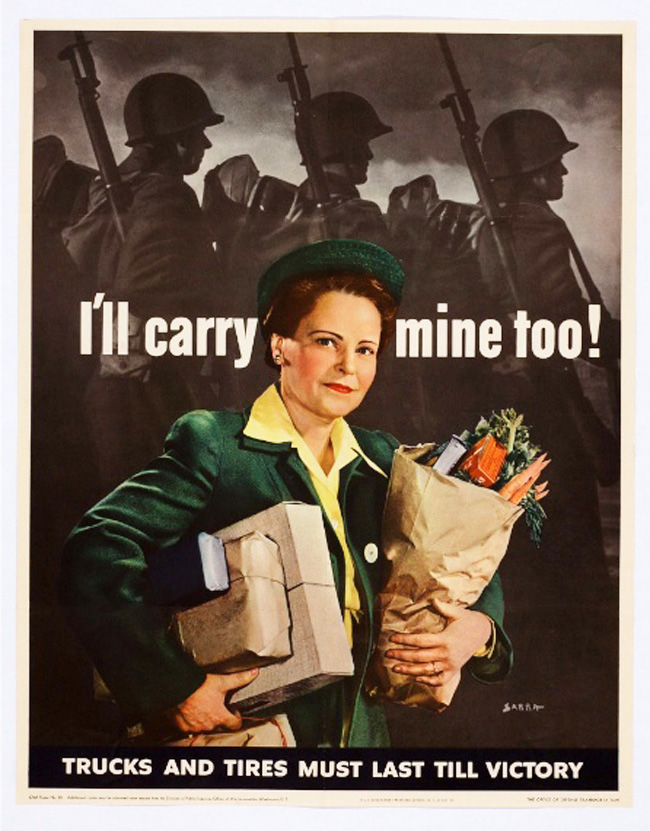 Gas rationing was intended to curb driving, in order to conserve rubber as much as gasoline. Japanese conquests in Asia had cut off our access to natural rubber, too.

Tires were also rationed and civilians couldn’t purchase them unless they could prove that driving was essential – as in farm labour, or commercial freight transport, or ambulances. Speed limits were reduced to cut wear and tear on tires, and make them last. 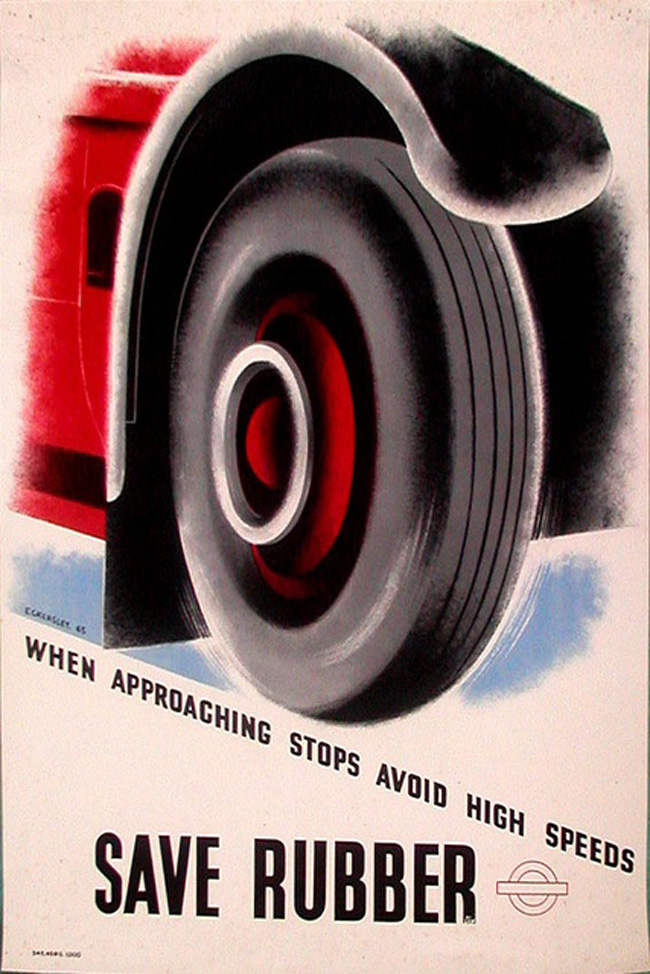 Elastic waistbands gave way to underpants with a single button on the side, called “step-ins.” My mother recalls a very funny incident when the doctor’s wife in Battleford stood up in church to sing a hymn, her button popped, and her step-ins fell to her ankles! Without missing a beat, she stepped out of her step-ins, shoved them into her bag, and kept on singing.

Lou Marr, a member of the RCAF Women’s Division, recalled the time her garter belt gave way and her stockings drifted down to her ankles – while she was lined up on parade! To read her story, click: Lou Marr: RCAF Camerawoman.

Factories weren’t even making new cars any longer – they had all been converted to manufacturing jeeps, tanks and bombers. So you couldn’t buy a new car because there was no such thing. In 1942, domestic automobile production ground to a halt.

This photo shows workers at Ford of Canada putting the finishing touches on the last civilian automobile, a Mercury 8, on March 31, 1942. 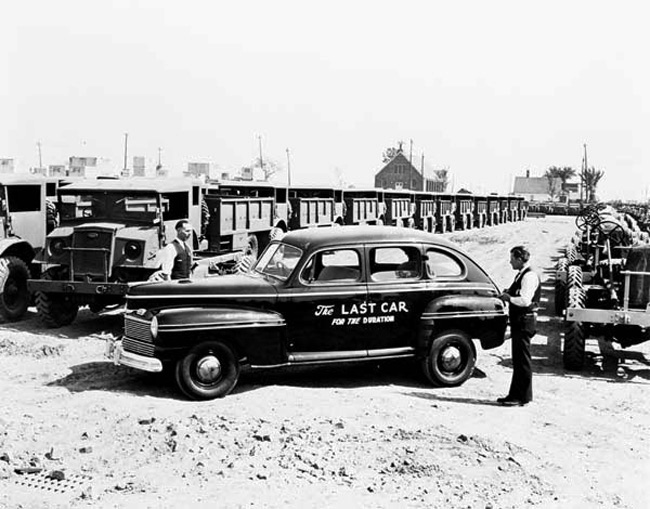 Because people were walking everywhere, hitch-hiking became very common. This sign, placed on the car’s dashboard or stuck to a window, indicated that the driver was happy to give a ride to anyone in uniform. (Photo Credit: University of Western Ontario.) 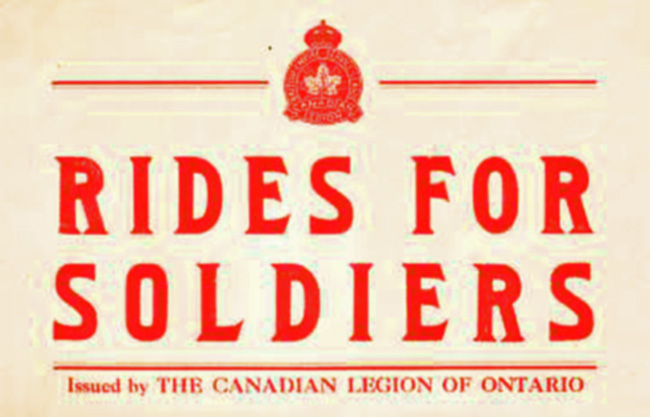 With so few vehicles on the roads, car pools became popular, although they didn’t call it a car pool back then, but a “car club,” presumably because people were clubbing together to save on gas.

In wartime, there was no such thing as a special lane for drivers with passengers, the way there are now on many city freeways. Probably there weren’t enough roads with multiple lanes to make it worthwhile.

But it certainly was encouraged to take somebody along if you had an extra seat. This poster urges people to “Double Up.” (Propaganda posters played heavily into people’s fear and guilt, you will notice.) 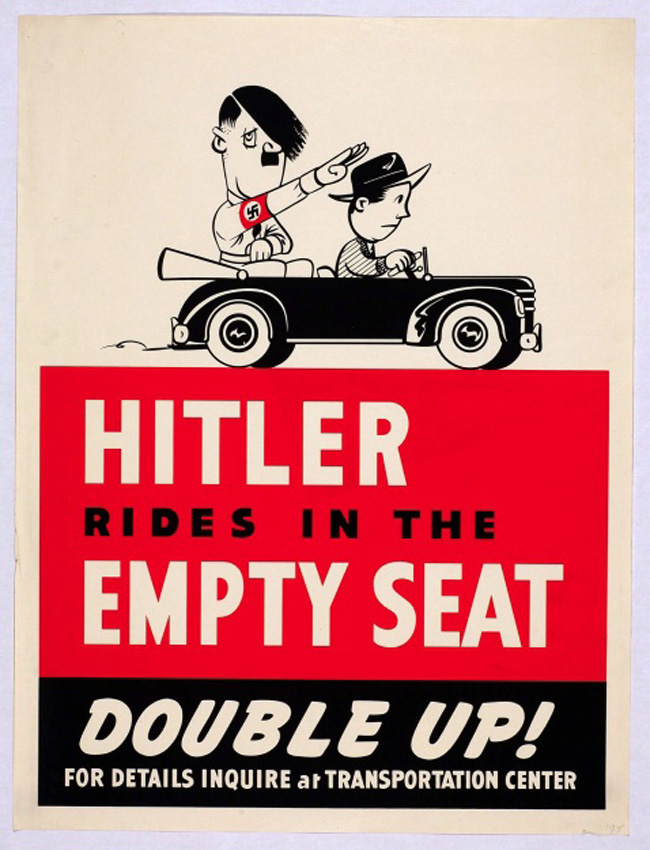 And this poster from the American Legion urges people to do a lot more than Double Up! It wanted drivers to pack in as many passengers as possible. 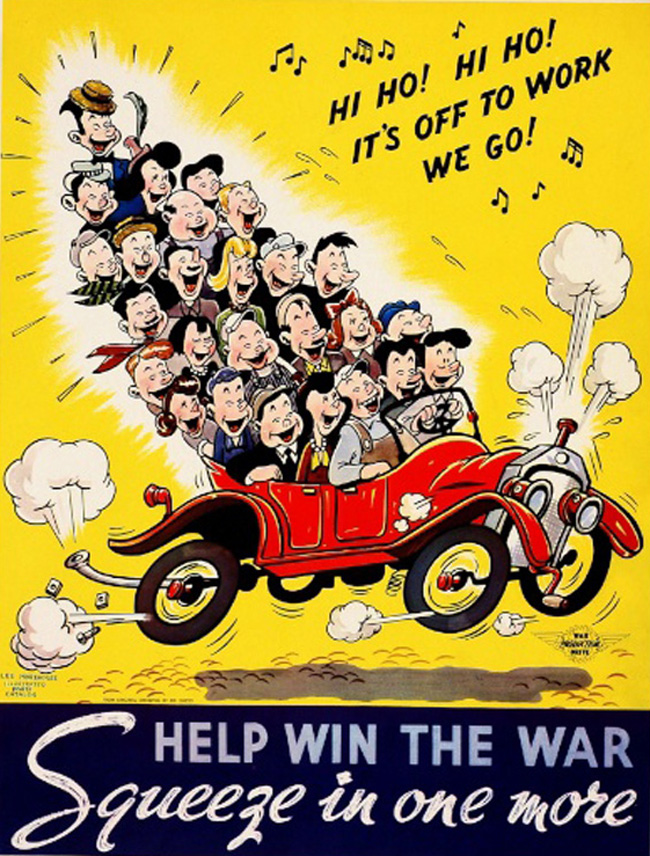 This poster from the American Legion really tugged at the old heartstrings, as it reminded civilians of who they were sacrificing for – the fighting man. 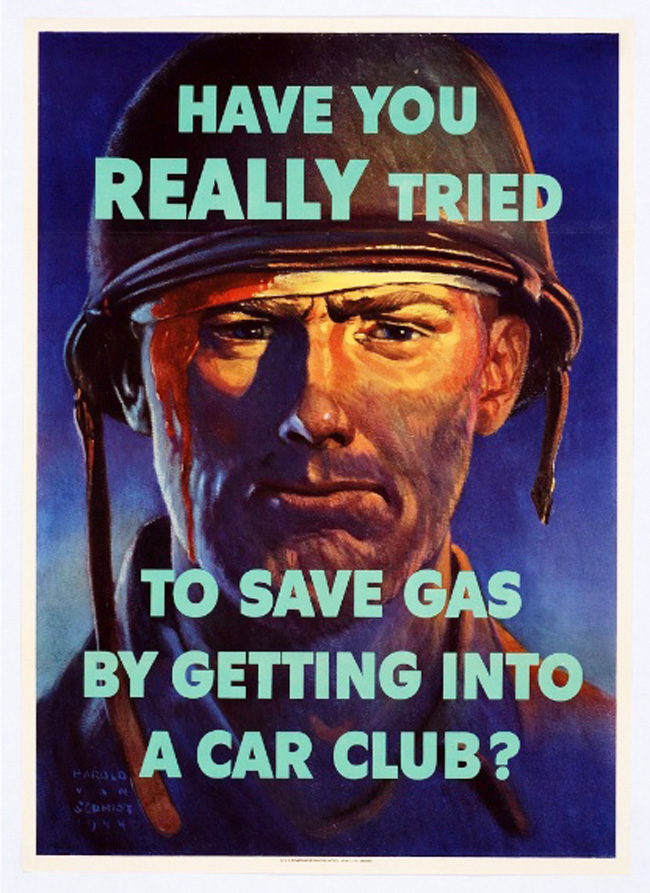 Even using public transportation was discouraged, because that, too, used valuable resources. I’m not talking about flying around in airplanes, or taking cruises on ships. All civilian travel by air and sea was banned.

I’m just talking about taking a trip on a train or even a Greyhound bus. That, too, was frowned upon. 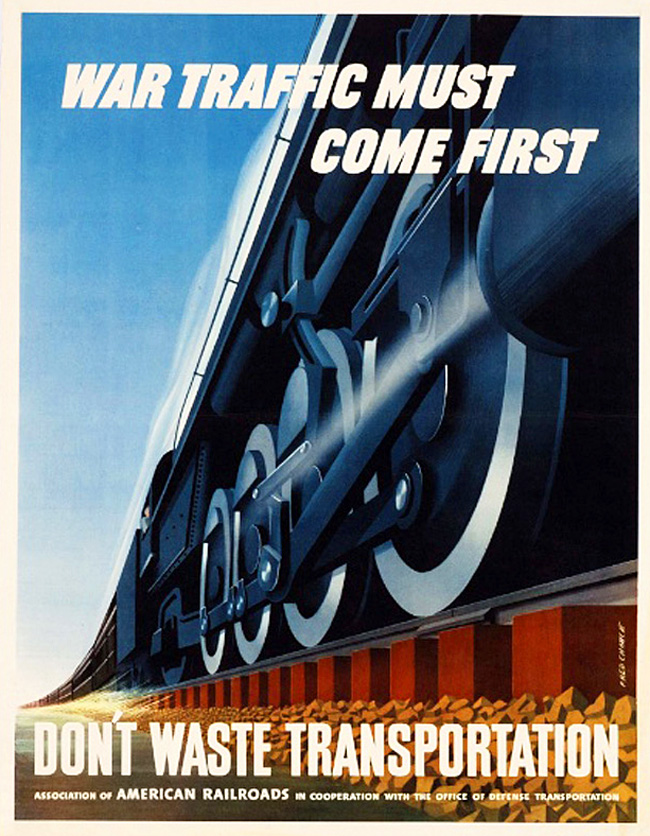 In fact, the government would have been happier if everyone had just stayed home. And many of them did! 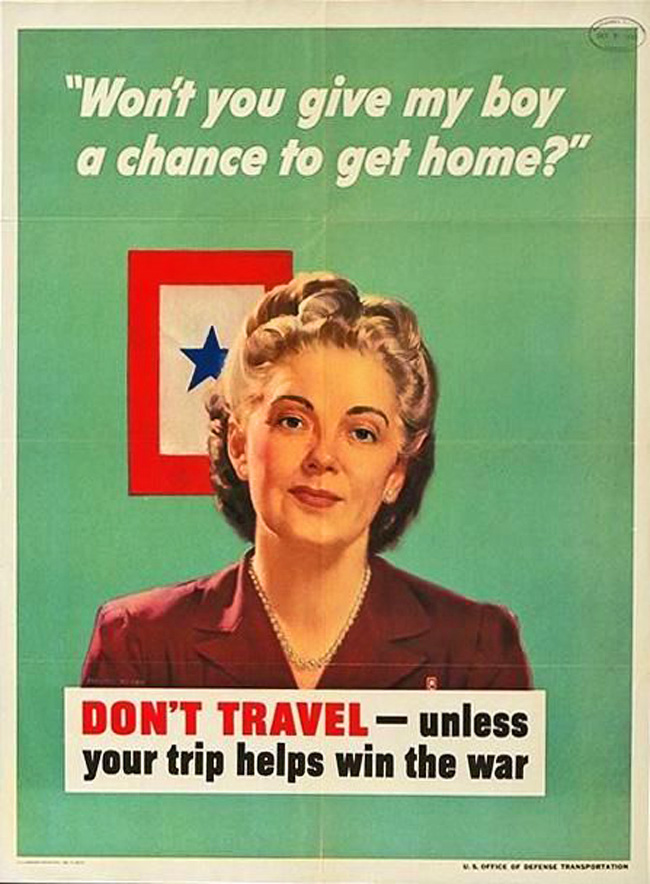 I wasn’t able to find a breakdown of just how much fuel was used per capita compared with today – but I’ll bet it was astounding.

Canadians back then saved on precious fossil fuels because they had no choice. Perhaps we can learn a lesson from the past. If we ever run that short of fuel, we can “Make Do” once again.

There’s always the trusty shank’s mare. Or even the old mare herself, as shown in the Star Weekly cover below!

People on the home front made other contributions to the war effort. Click here to read about them:

The Star Weekly was a Canadian newsmagazine published by the Toronto Star. During the Second World War, a colour illustration with a wartime theme appeared on the cover each week. Here’s an image from May 29, 1943, showing a young couple courting the old-fashioned way, with a horse and cart. To see my collection of covers, click Star Weekly At War. 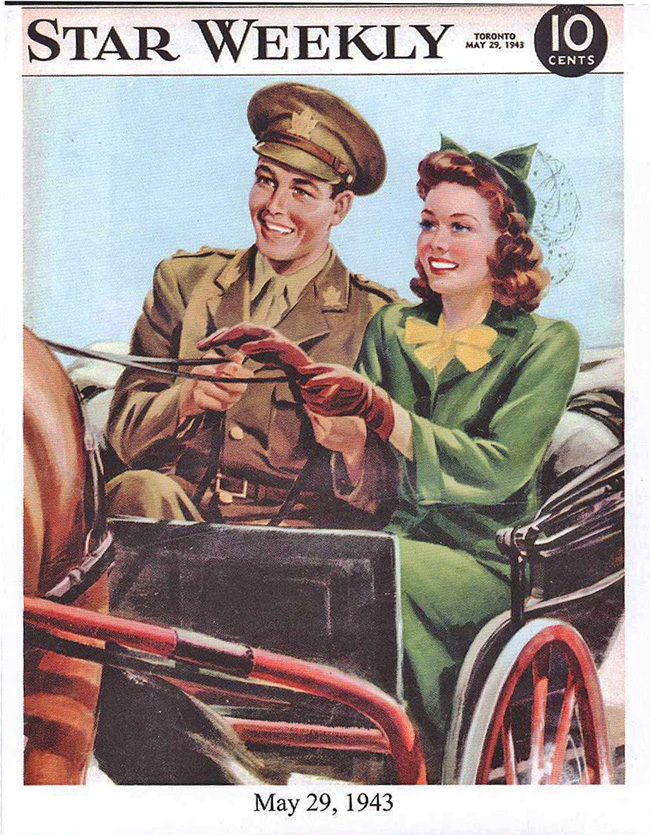