Georgina Harvey was a young woman from a well-known family in Kelowna, British Columbia, when she joined the air force in 1943 and trained as a photographer. Her photo album reveals a fascinating slice of life in uniform. 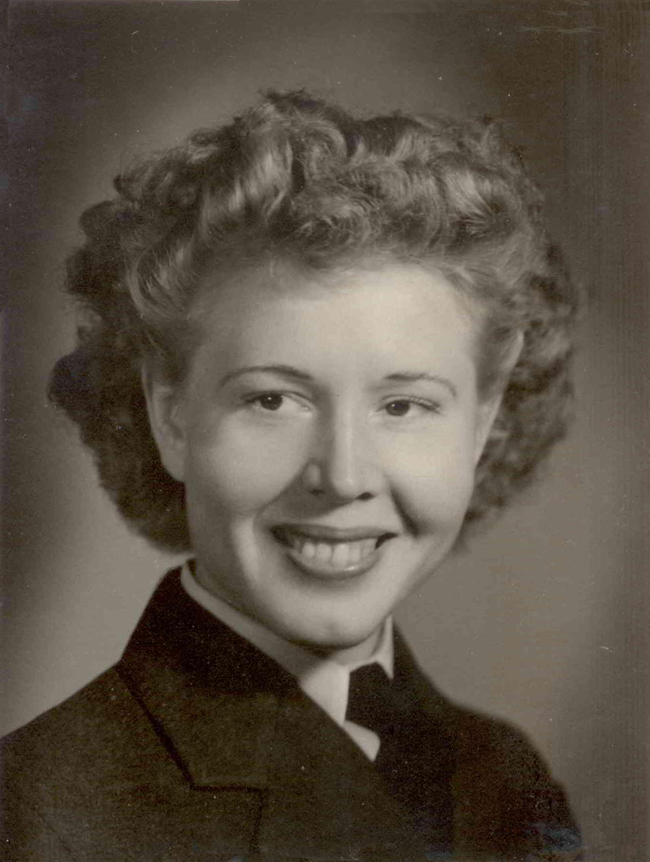 Georgina Harvey was born in Kelowna to the distinguished Harvey family, still a well-known name in that community.

The stately brick house where she grew up was built by her uncle Charles in 1908, and then sold to her father George, a fruit rancher and taxidermist. George and his wife Beatrice had ten children, who became known locally as “The Harvey Ten.”

One of the downtown streets is named Harvey, and the handsome house where Georgina grew up, shown here, is now a historic site. 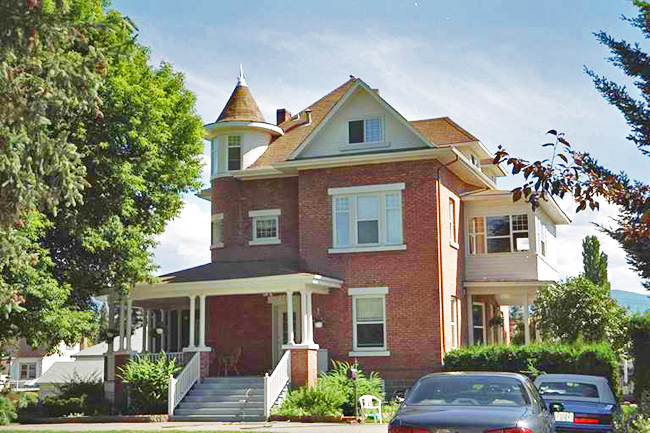 Georgie joined the Royal Canadian Air Force Women’s Division in Trail, B.C. on January 23, 1943. Like many members of the WDs, as they were called, she trained at No. 7 Manning Depot in Rockcliffe, Ontario.

Here’s a photo of the rather grim-looking building at Rockcliffe, a former drill hall with offices and classrooms.

Men and women who were particularly bright and motivated were chosen to train in photography. Georgina trained in Photography Class 26. Here’s a photo of her classroom. Notice the hat, perhaps Georgie’s, sitting on the table at the lower left corner of the photo. 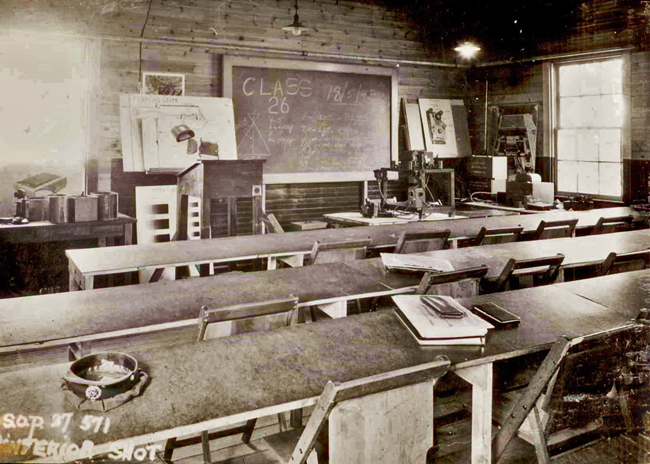 Photography was a demanding subject and the trainees had to study hard. The most important tool of their trade was the F-24 Camera, which was mounted into an aircraft and used to take aerial photographs. 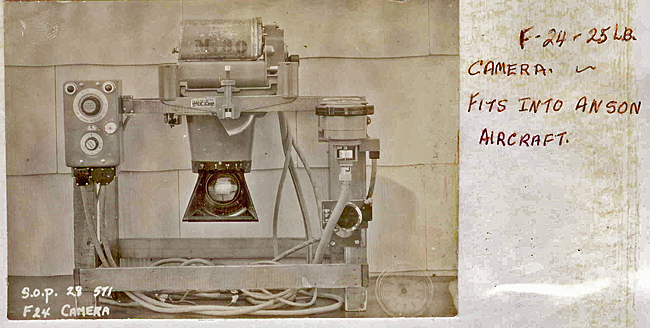 Georgie expressed her frustration at the inner workings of this huge camera in the caption written beside this photograph. “The gear box of the F-24 that causes me so much grief. We have to know how every little screw works and all their names.”

One of the more exciting aspects of photography was the time spent in and around the aircraft. Women weren’t allowed to pilot the aircraft, but they became pretty familiar with them. They learned how to mount the camera inside the aircraft, and they had to be strong – the camera weighed twenty-five pounds. Here’s Georgie wrestling with the camera. 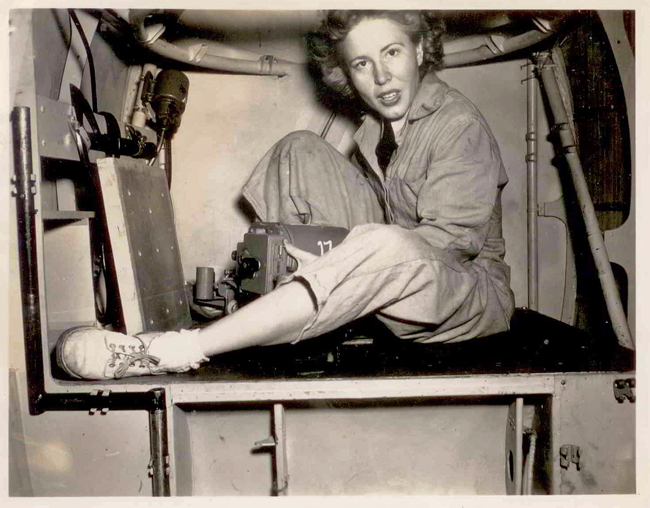 Here’s her friend Elsie Livesay clambering around on an aircraft. 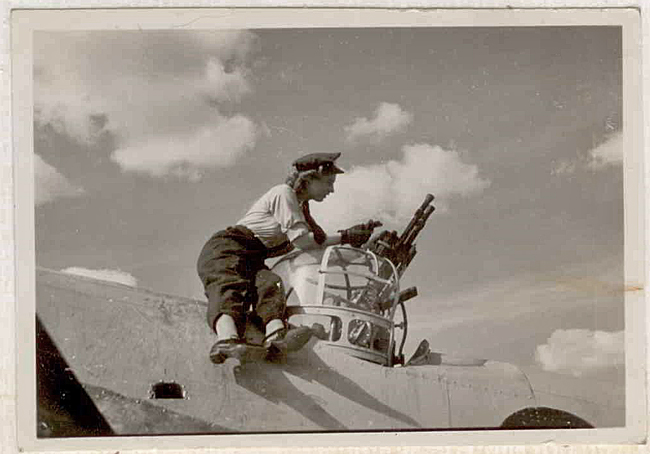 And here’s another one of her friend Rita Potticary. It’s a good thing the girls were allowed to wear pants as part of their uniform! 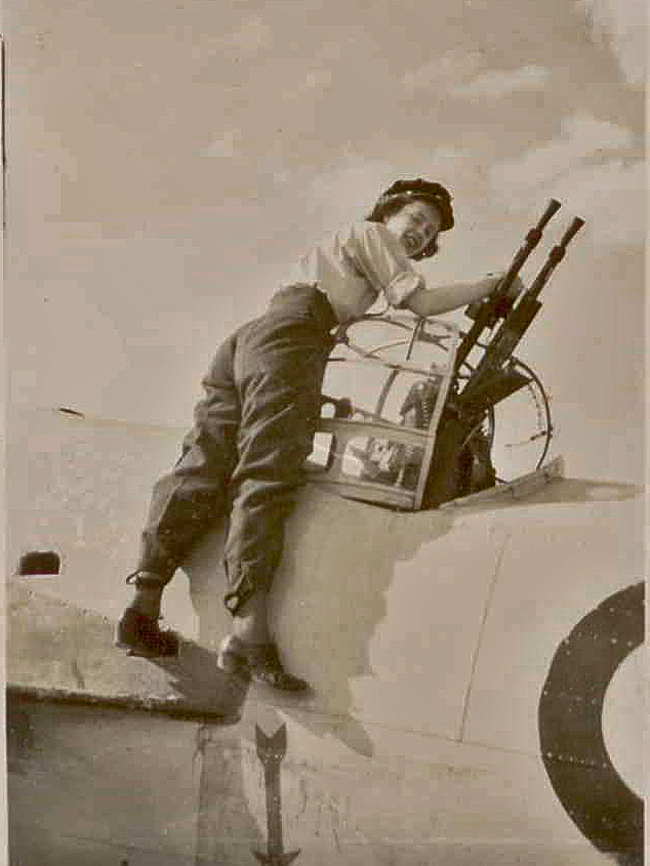 Of course, they were surrounded by handsome pilots. This one, the dashing Photo Officer Crisp, rates a remark in Georgie’s photo album: “Owooo!” I think that’s supposed to be a wolf howl! 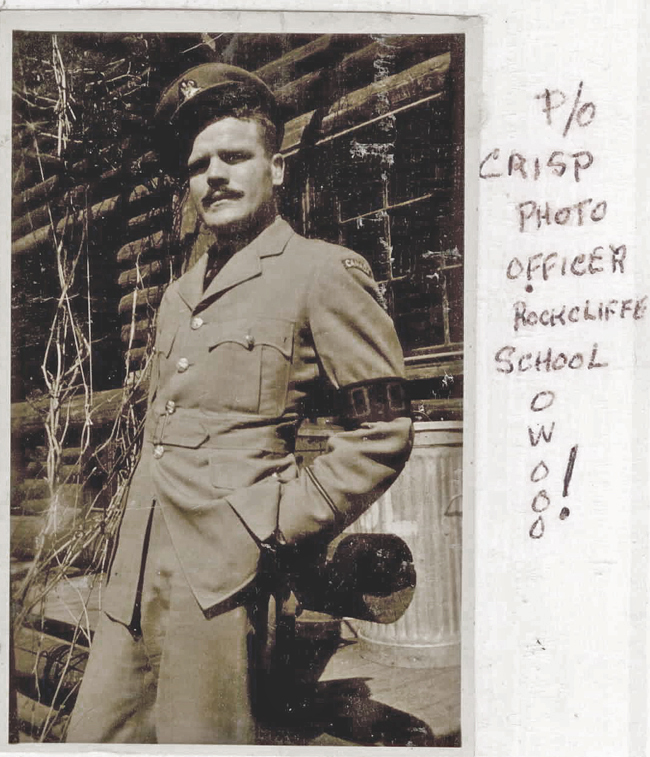 And speaking of wolves, I expect they were a daily occurrence on a base filled with young attractive women. 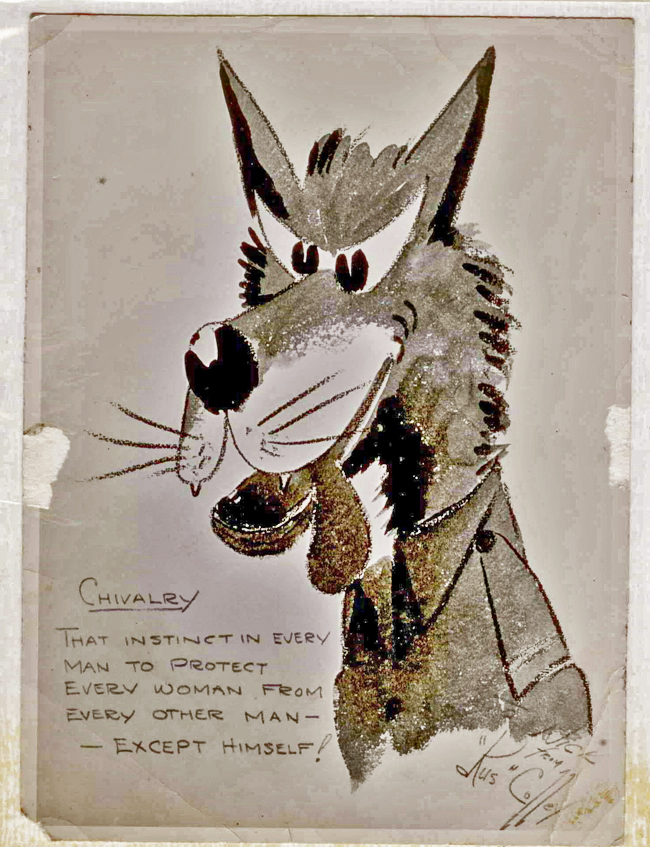 Some of the pilots, though, didn’t receive such a high rating from the girls. This poor young man named Charko was the object of fun. (My apologies to P/O Charko if he or his family sees this!) 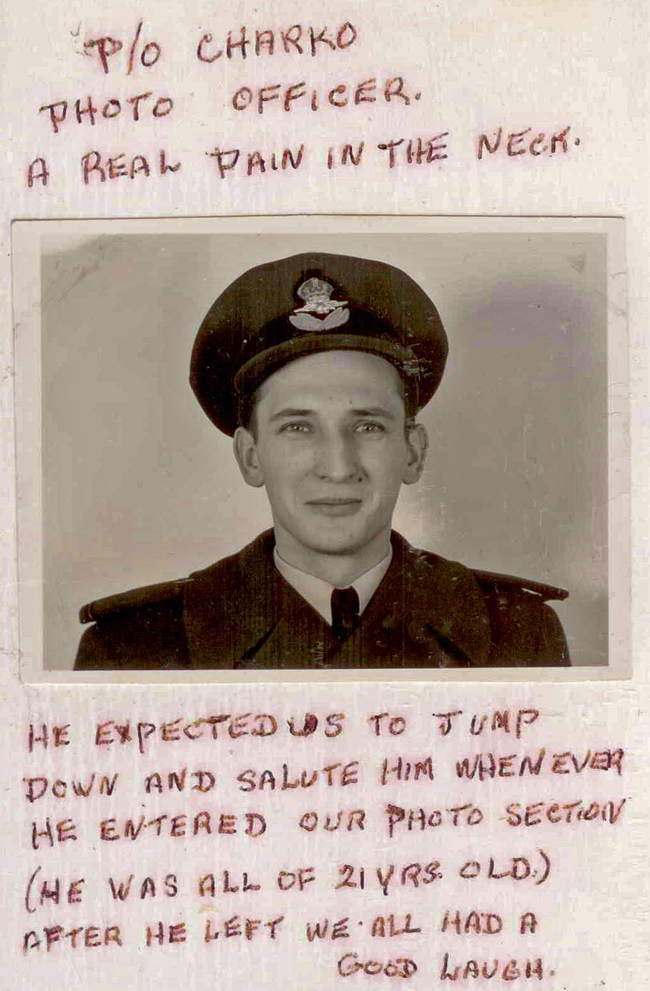 The station even had a mascot named Radar. Since many of the young people, both men and women, had pets back home, I expect the presence of a station dog helped to alleviate their homesickness. Don’t you love Radar’s little fur-trimmed cape, with the RCAF crest on it? 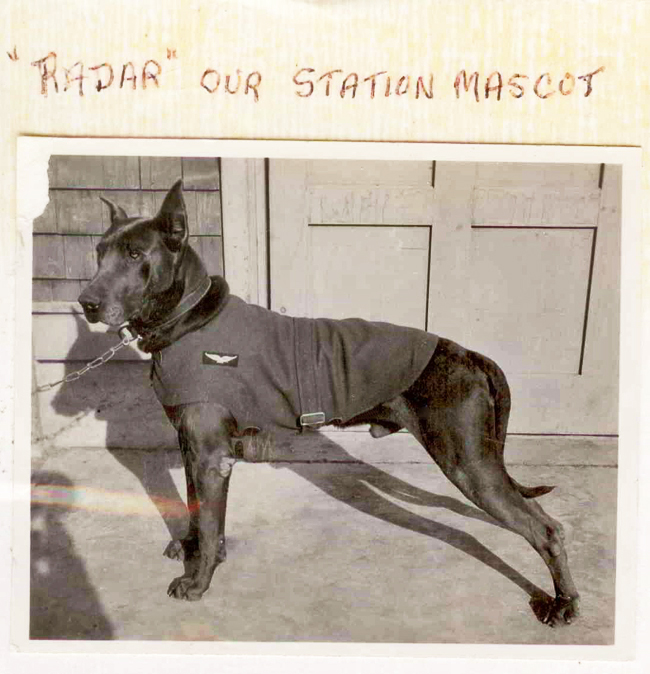 When the course came to an end, Georgina passed with flying colours. Here’s the graduation photo from Class 26. 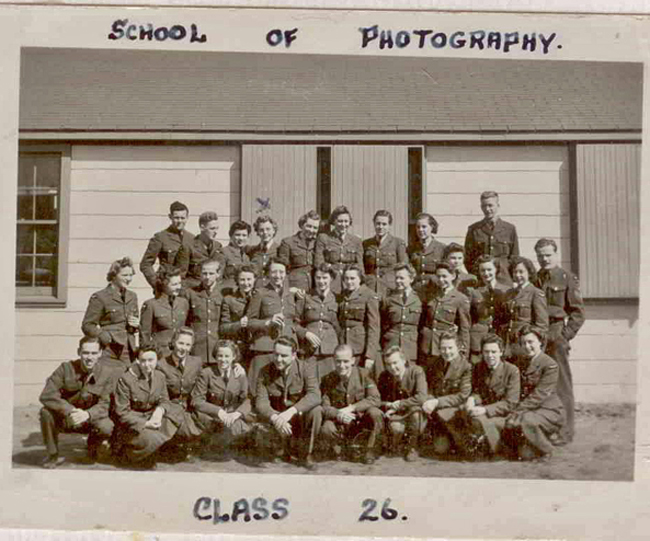 After completing her training, Georgina was posted to Vulcan, Alberta, where she spent four months. She worked alongside a number of girls who became friends. Here’s one group, looking smart in their khaki coveralls. Georgie is on the top right.

(The girl seated in the front row on the left is named Yvonne Wildman, formerly Yvonne Valleau. She still lives in Kindersley, Saskatchewan, and I interviewed her in 2015. To read her story, click here: RCAF Photographer Yvonne Valleau.) 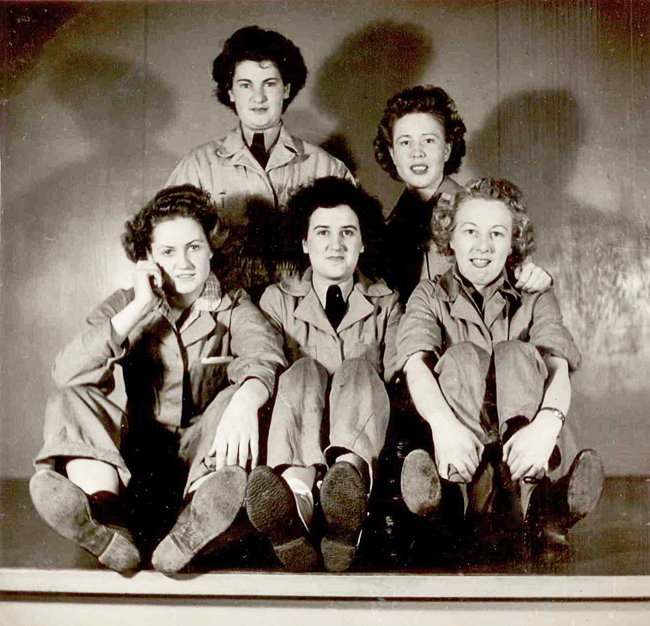 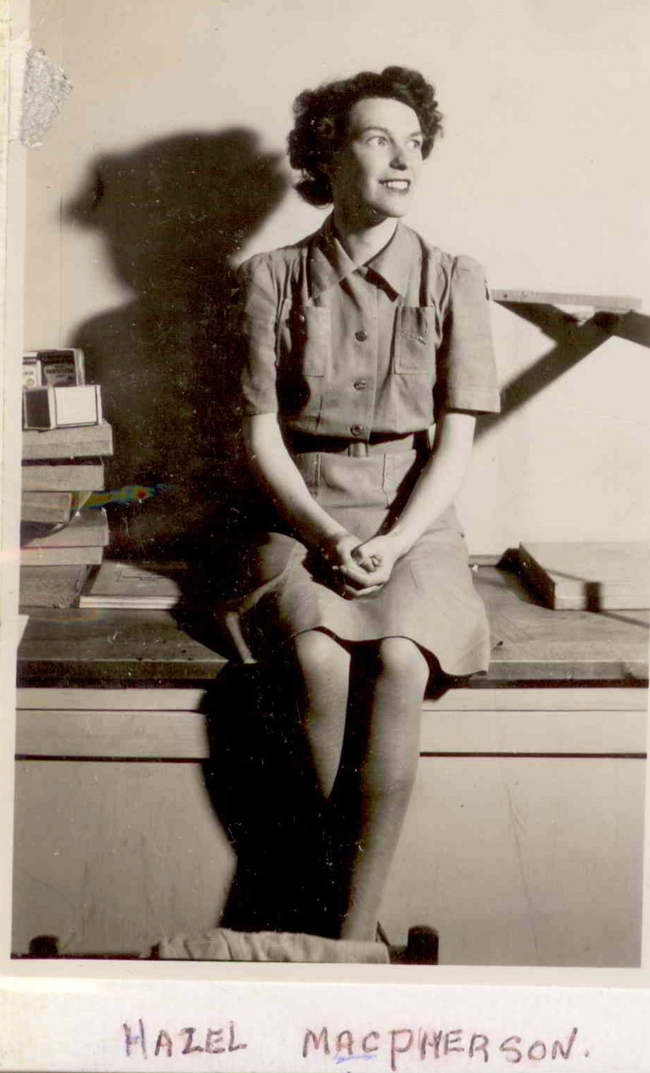 Georgie then moved on to the No. 8 Bombing and Gunnery School in Lethbridge, Alberta, where she served from August 14, 1943 to November 1944. Their purpose was to take photographs of bomb targets in order to determine whether the men training to become bomb aimers were striking their mark.

Perhaps the most exciting aspect of serving in the RCAF as an aerial photographer was the opportunity to fly! Remember, this was back in the day when most people had never flown at all. Georgina was thrilled by her first flight in an Anson, from Lethbridge over the Rocky Mountains. 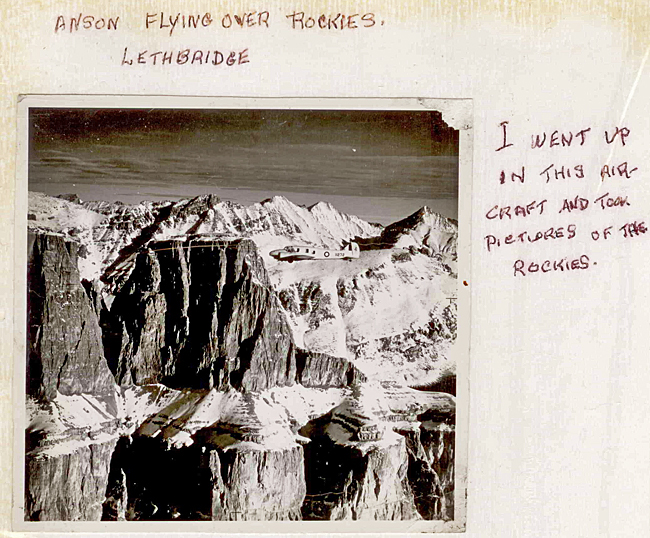 Georgie had grown up surrounded by mountains, but it must have been an even greater thrill for a young man or woman from the prairies. I can picture Georgie focussing her camera through the window, pointing it at the other aircraft flying alongside. 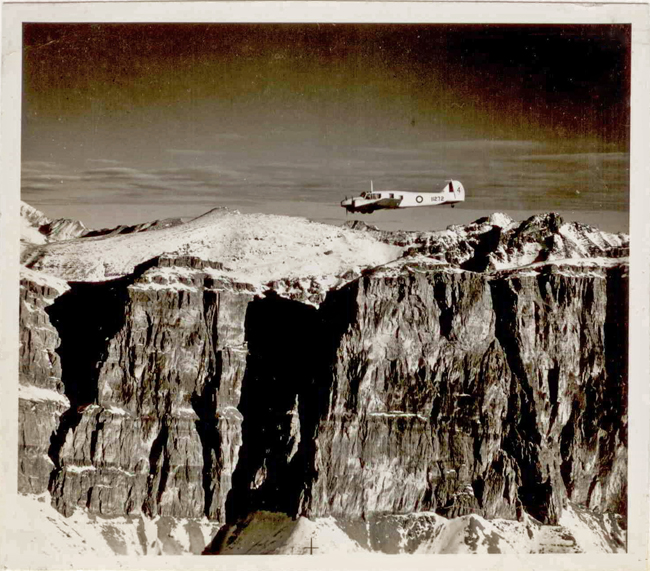 They spent time around the larger aircraft, too. Here’s a photo of a Lancaster with nose art reading “Crazy Rabbit” that was on display at their base in Lethbridge, date unknown. 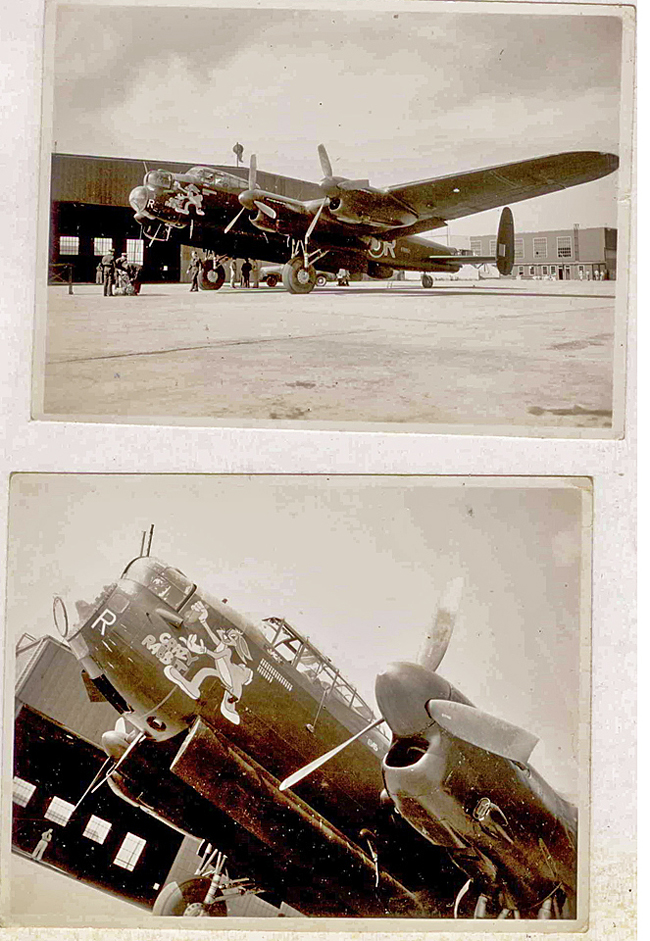 It wasn’t all hard work. Here a dance on the base at Lethbridge. Some of the women are in uniform and others are wearing “civvies” – civilian clothing. Doesn’t it look like they’re having a great time? 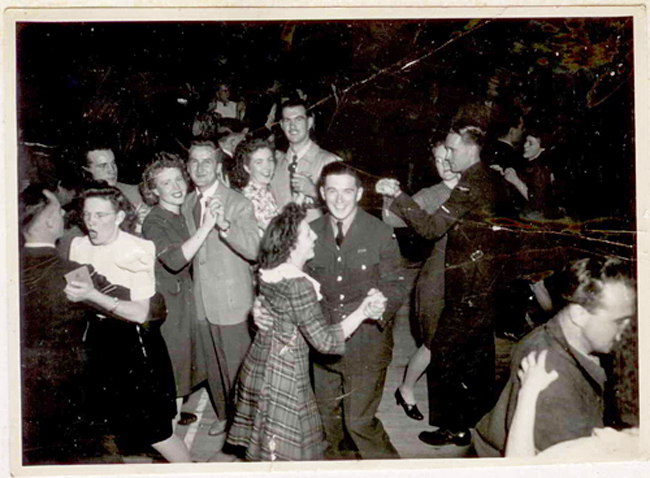 Georgina captioned this photograph: “The whole gang relaxing after a hard day’s work.” She’s the only one who has her tunic off. I’m not sure where this photo was taken, but it looks like they were allowed to drink. Smoking, of course, was allowed pretty much everywhere back then. 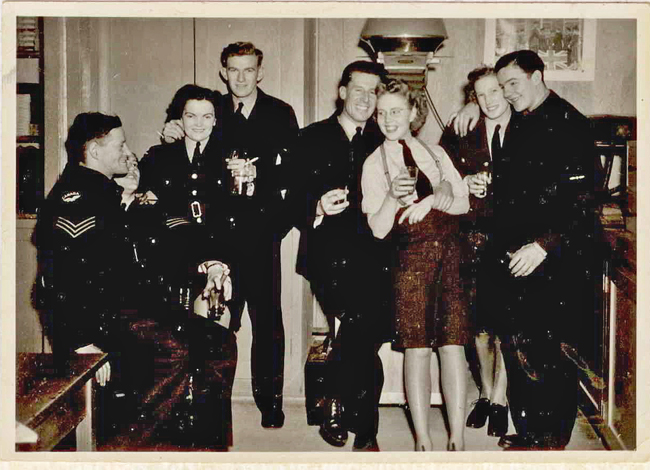 After the war ended, Georgie met Stewart Irving, married and had five children: four boys and one girl. Her husband was a veteran himself who served with the Canadian Scottish and the Seaforths. He was captured in Italy and finished the war in a prison camp.

Georgina was a devoted wife and mother. Now 101, she lives in Coquitlam, B.C.

Georgina, thank you for taking the trouble to preserve these precious photographs. And thank you to her son-in-law, Ken Hallgren, for scanning and sharing the whole album with Wartime Wednesdays.

And thank you, Georgina, along with fifty thousand other Canadian women, for joining up and for serving your country during wartime!

The Star Weekly was a Canadian newsmagazine published by the Toronto Star. This advertisement from inside the magazine, dated August 28, 1943, illustrates the effort to recruit women into the three branches of the armed forces. From not allowing them to serve at all for the first two years, the government began actively recruiting them. I can’t imagine anyone being nicknamed “Frivolous Sal” but it’s supposed to show how a flighty girl settled down after she joined the armed forces. 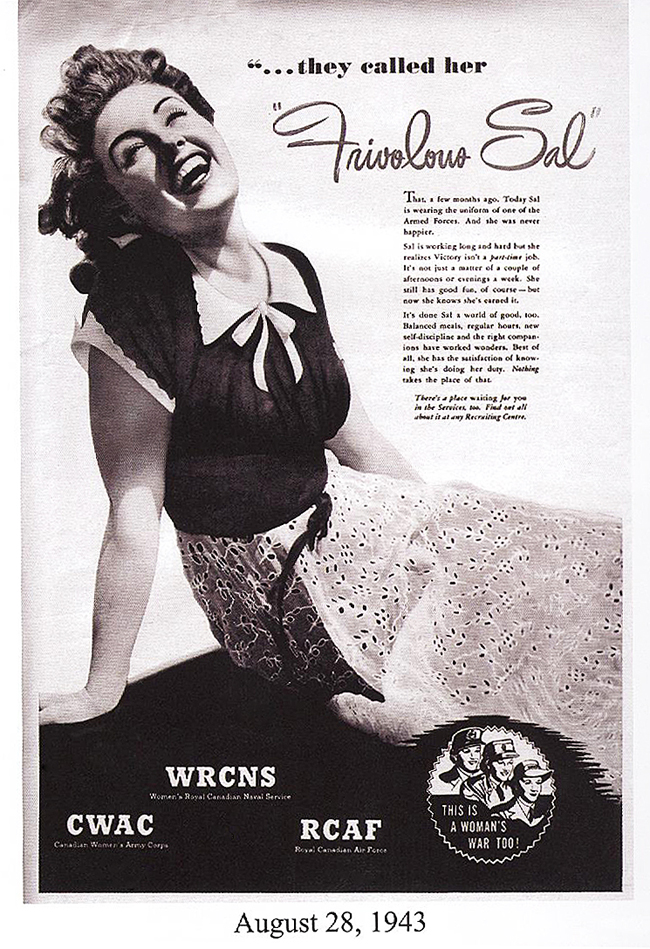