This week marks the 75th anniversary of the declaration of World War Two. At some point during the six long years that followed, probably every Canadian secretly feared the worst.

On February 19, 1942, they didn’t have to speculate any longer: a fake Nazi invasion of Winnipeg called IF Day fuelled the nightmare.

This chilling photograph of the national flag being replaced with the swastika might have been taken in almost any European city. But it was actually a staged photo, taken at Lower Fort Garry in Winnipeg on IF Day. 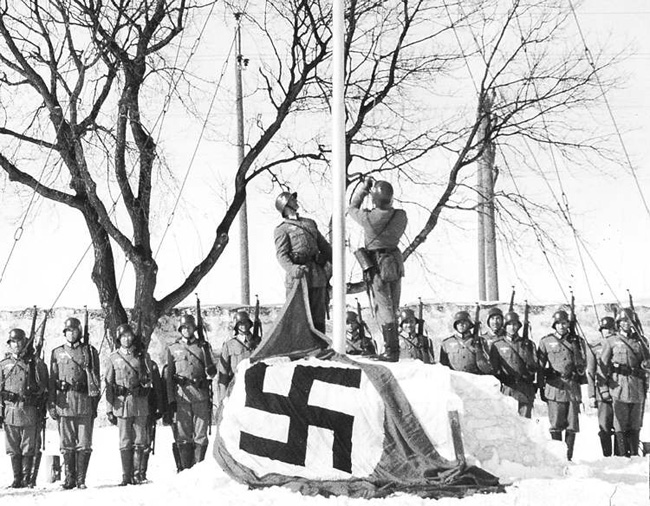 In the first months of the war Canadians watched from afar, horrified, as the Nazis marched through France, Holland, Belgium, and other peaceful European countries.

We were fortunate to be so removed from the threat of enemy invasion. But as the war dragged on, even Canadians couldn’t help but wonder: was our country safe?

Capitalizing on Canada’s fears, a wealthy industrialist named Jean Draper Perrin arranged for a fake “invasion” of Winnipeg on February 19, 1942. It was play-acting carried out on a grand scale, and so convincing that some people were terrified.

That was the primary purpose of IF Day: to scare people into forking over their cash for Victory Loans, or Victory Bonds. These were loans to the federal government for increased war spending. Draper was the city’s Victory Loan chairman.

Posters like this one played on people’s worst fears. 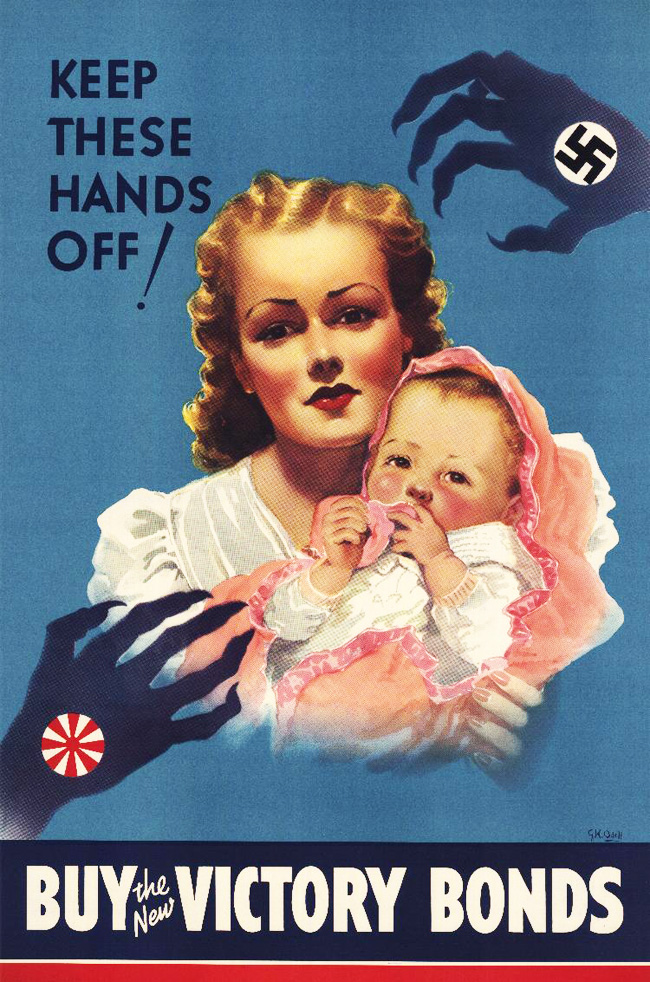 Manitoba newspapers publicized the event a few days beforehand to prevent public panic. Even residents of neighbouring Minnesota were warned, in case they overheard the fake radio broadcasts.

But the “invasion” still took many citizens by surprise.

At 5:30 a.m. on a cold winter morning, while the city was still cloaked in darkness, it began. Fake Nazis commandeered a radio station and began broadcasting, while enemy troops assembled on the west side of the city.

Participating in the charade were 3,500 Canadian Army members, making it the largest military exercise in Winnipeg. It included 300 veterans of the First World War and a number of reserve and civilian groups.

The Nazi troops were volunteers wearing uniforms rented from Hollywood, with painted sabre scars on their faces to make them look even more vicious!

Defending Winnipeg was a small group of active and reserve troops, assisted by local community groups. The gallant defenders formed a perimeter around the downtown area and prepared to do battle with the invaders.

Attacked By Air and Land

At 7 a.m. air-raid sirens sounded, and a blackout was ordered. Then the blitzkrieg began, with mock bombings from Royal Canadian Air Force aircraft painted to look like German fighter planes.

The firefight included large-scale troop movements and the simulated destruction of major bridges. Telephone and flashing signals from downtown headquarters directed the defending troops. As the fighting intensified, tanks appeared at road and rail junctions.

At 8 a.m., the first mock casualty was reported. Dressing stations were set up at strategic points to treat the wounded.

(They also treated the two real casualties of the event – a soldier who sprained his ankle, and a woman who cut her thumb preparing toast during the early-morning blackout.)

At 9:30 a.m., the valiant defenders surrendered to the German soldiers, who sent armed troops throughout the city, harassing civilians.

The Nazis drove tanks down Portage Avenue, one of the main downtown streets, reminiscent of the Nazis rolling into Paris and other cities. 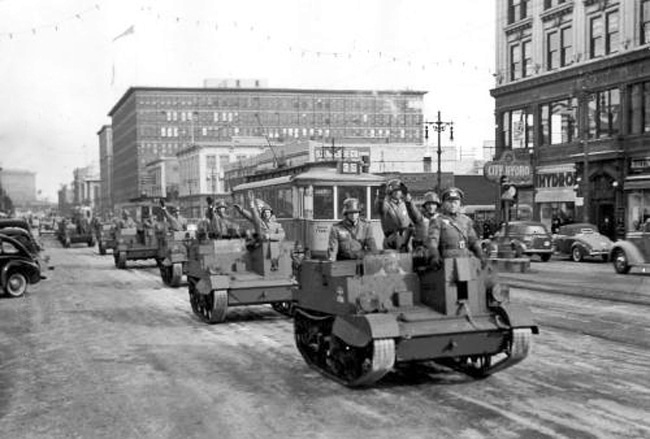 The fake Germans rounded up local politicians, including Premier John Bracken, Mayor John Queen, and Manitoba’s Lieutenant Governor Roland Fairbairn McWilliams, and marched them away to a prison camp. 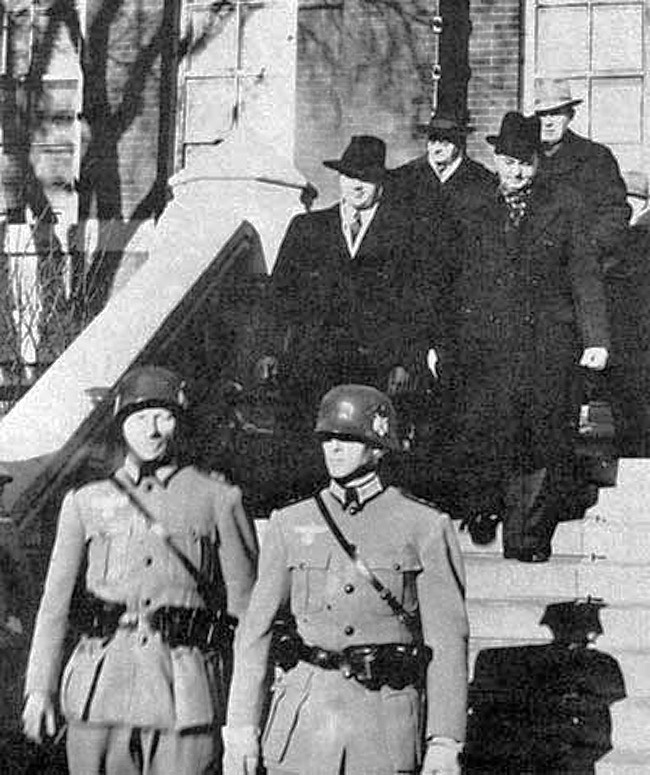 Then the Germans announced that they were carrying out Hitler’s instructions to colonize Canada, and posted this decree throughout the city:

This territory is now a part of the Greater Reich.

No civilians will be permitted on the streets between 9:30 p.m. and daybreak.

All public places are out of bounds to civilians, and not more than eight persons can gather at one time in any place.

Every householder must provide billeting for five soldiers.

All organizations of a military, semi-military or fraternal nature are hereby disbanded and banned. Girl Guide, Boy Scout and similar youth organizations will remain in existence but under the direction of the Storm troops.

All owners of motor cars, trucks and buses must register same at Occupation Headquarters, where they will be taken over by the Army of Occupation.

Each farmer must immediately report all stocks of grain and livestock and no farm produce may be sold except through the office of the Kommandant of supplies in Winnipeg. He may not keep any for his own consumption but must buy it back through the Central Authority in Winnipeg.

All national emblems excluding the Swastika must be immediately destroyed.

Each inhabitant will be furnished with a ration card, and food and clothing may only be purchased on presentation of this card.

The following offences will result in death without trial:

Attempting to organize resistance against the Army of Occupation.

Entering or leaving the province without permission.

Failure to report all goods possessed when ordered to do so.

Notices were posted on churches, forbidding worship services, and the German troops arrested any priests who objected. 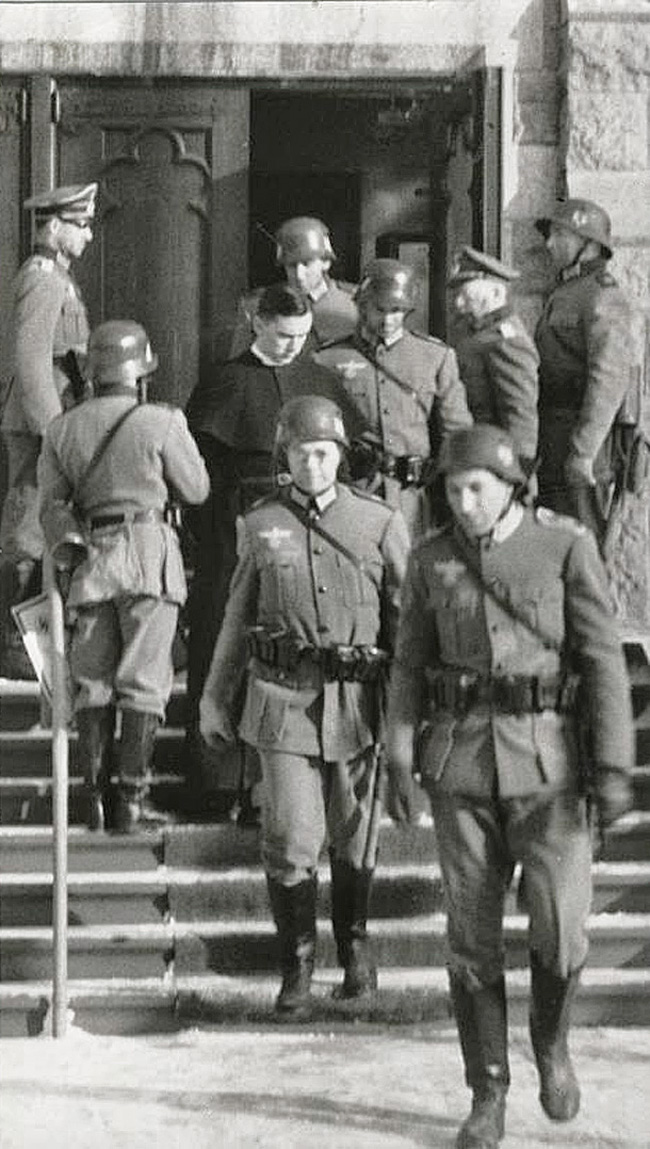 They attacked Henry Weppler, a newspaper seller for the Winnipeg Free Press, and ripped up his papers. 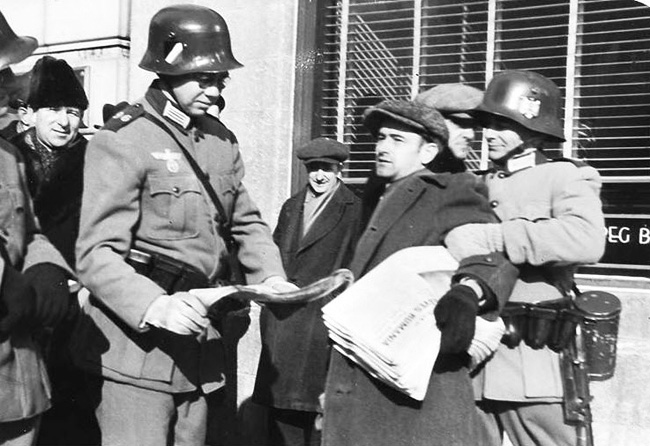 The other daily newspaper, The Winnipeg Tribune, was renamed Das Winnipeger Lügenblatt (“The Winnipeg Lies-sheet”), a Nazi publication featuring heavily-censored columns and a front page written almost entirely in German. 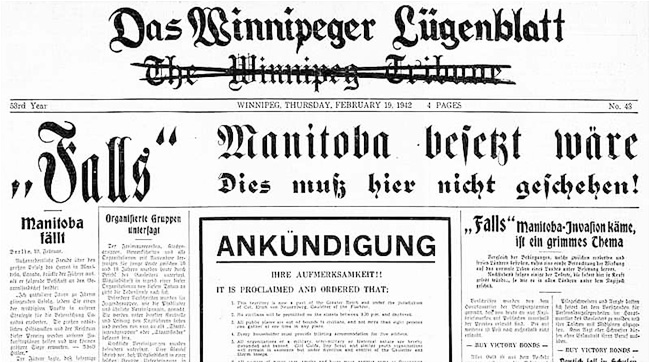 The fake Germans gleefully burned a pile of books in front of the main branch of the Winnipeg Public Library (Don’t worry — these books had been pre-selected for incineration as damaged or outdated). 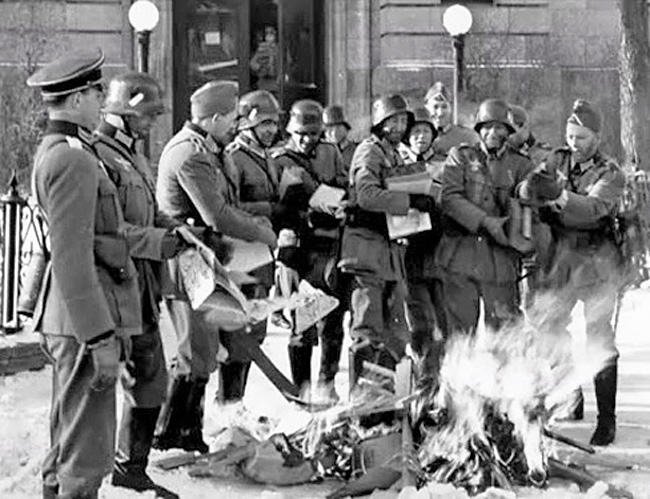 The fake troops even looted stores and homes. Soldiers entered the cafeteria at Great West Life and stole lunches from workers. They seized buffalo coats from the police station and wore them throughout the day while the police officers suffered from the cold.

At one local elementary school, they arrested the principal and replaced him with their own instructor, dedicated to teaching the “Nazi Truth.” High school students throughout the city were forced to learn special lessons.

Canadian currency was replaced with fake German Reichsmarks. (These were the only propaganda notes that Canada created during the war.) This photo of the fake money shows an advertisement for Victory Loans on the back. 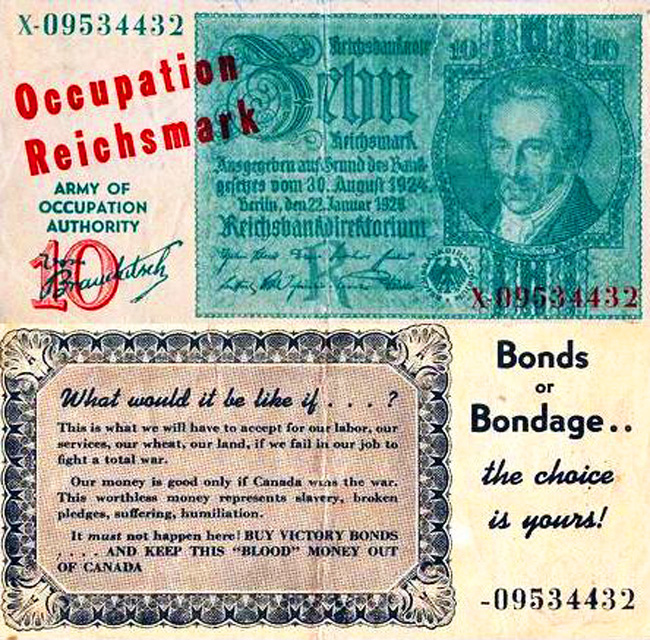 The long day ended at 5:30 p.m. with a ceremonial release of prisoners, a parade, and speeches from the released dignitaries in front of the Parliament buildings.

Members of the organizing committee and local businesspeople marched down Portage Avenue with banners reading: “It MUST Not Happen Here!” and “Buy Victory Bonds!”

CBC Radio broadcast a program called “Swastika over Canada” throughout the province, along with military music and extracts of Hitler’s speeches. 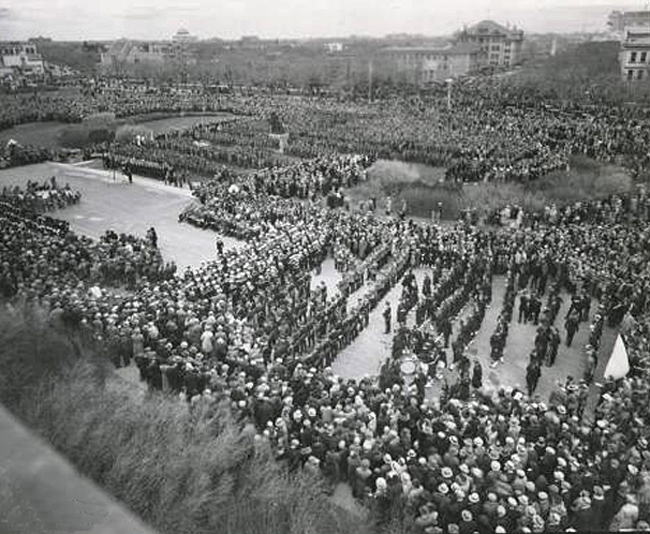 The Fear Factor worked: the Victory Loan campaign raised over $3 million on IF Day, the city’s largest single-day total. The campaign raised about $2 billion nationwide, and IF Day was considered one of the most successful fundraising events in the country.

For the people of Winnipeg, the play was over and they went back to their homes. The Nazi threat was once again reduced to a cartoon of Hitler and his thugs, as illustrated by this Winnipeg Tribune cartoon. 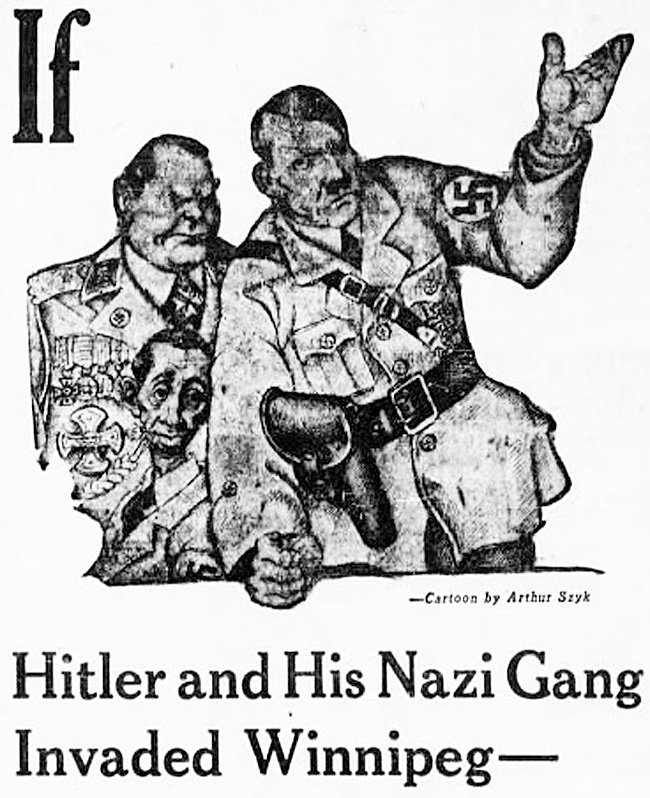 For millions of others, the nightmare was a reality. How differently it turned out for civilians in other parts of the world. For them, it was no play but a bad dream from which they could not awake.

Look at the anguish on the face of this unidentified French man, watching the Nazis march through his town. 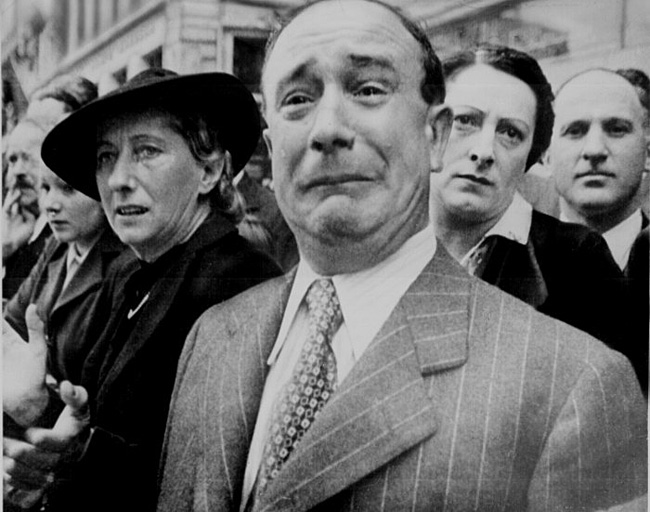 Or this haunting photograph of a woman in Czechoslovakia, giving the Heil Hitler salute while she weeps. 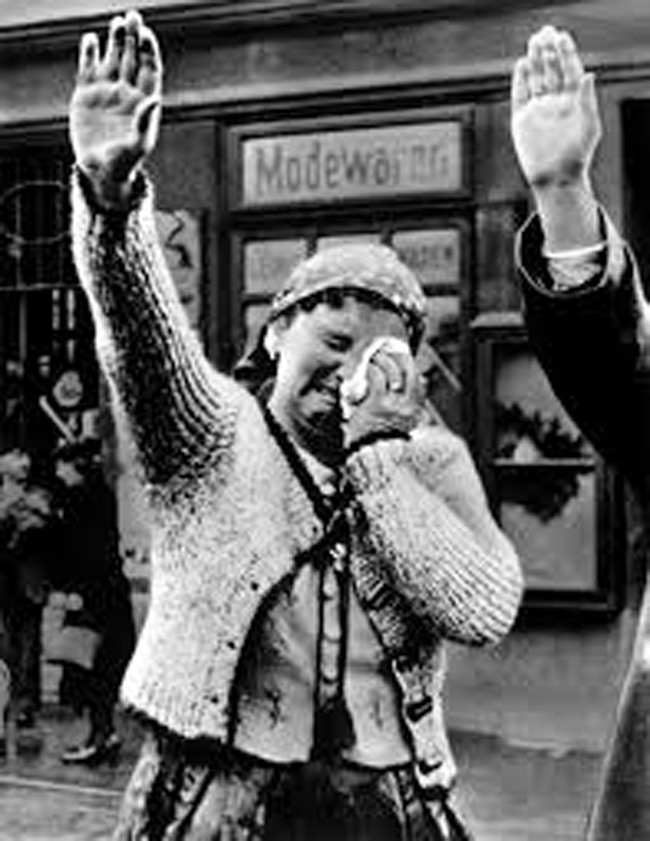 How very fortunate that Canada has never suffered an occupation, and please God we never will.

For a true story about the Nazi invasion of the Netherlands, click here: Heroic Family Hid Jews.

The Star Weekly was a Canadian newsmagazine published by the Toronto Star. This image from March 26, 1942 (just one month after IF Day) shows the perceived threat from Nazi bombers.

The small print is difficult to read, but each city is marked with the population and distance from the coast by air. For example, Saskatoon with a population of 45,000 is 600 miles from the coast, or three hours. Toronto with a population of 660,000 is only two hours away. The caption warns: “Just remember, these times are based on a bomber speed of 200 miles per hour. With bomber planes improving almost daily, this is considered slow.” To see my entire collection of Star Weekly covers, click: Star Weekly At War. 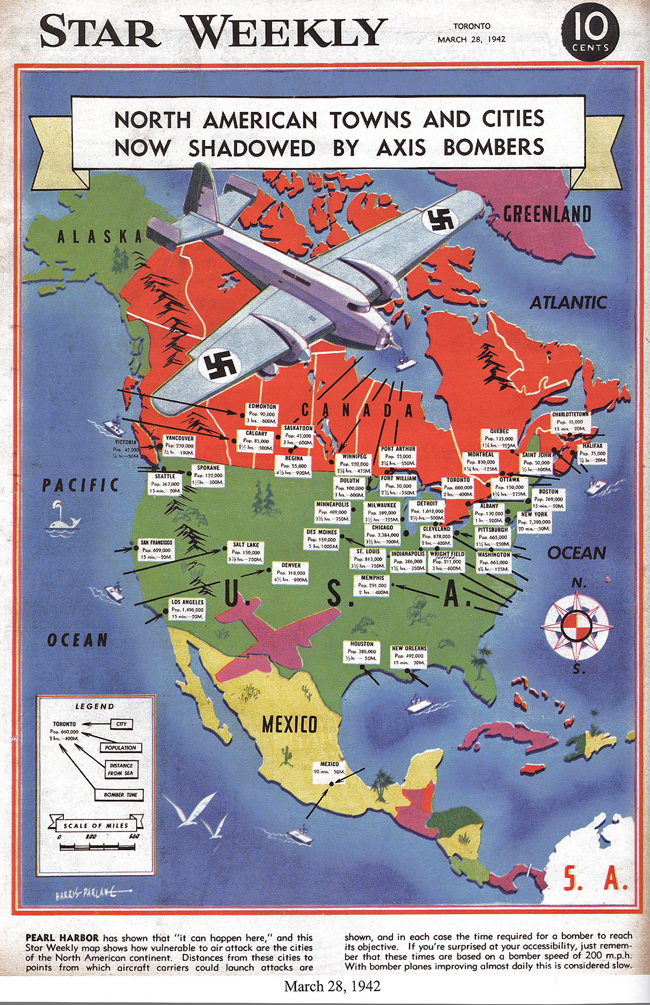