Dear Friends: My mother happily went to meet her Maker in November 2017 with heartfelt gratitude to MAiD legislation, short for Medical Assistance in Dying. Here’s how it worked for her, and for me. 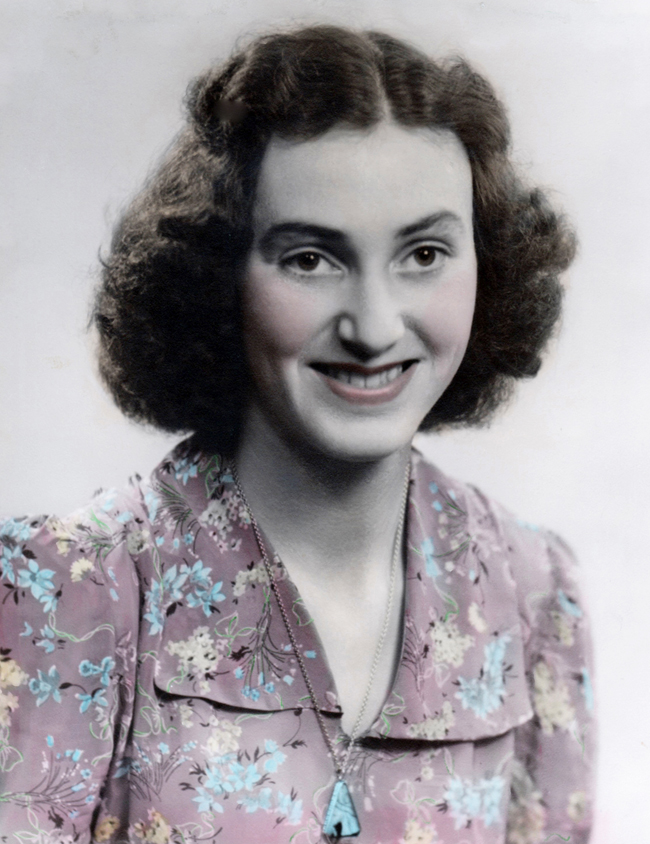 But the date has another significance, too. Four years ago today, on June 17, 2016, Canada’s Parliament passed legislation that allows medically assisted deaths. Since then, more than 13,000 Canadians have taken advantage of this opportunity.

At the time the legislation was passed, my mother jokingly said that the date was a sign. She was already firmly committed to the principle of choosing the time and place of her own death.

For three decades, June suffered from congestive heart failure. In her 60s and 70s, it was controlled with medications to thin her blood and regulate her blood pressure. In her 80s, things began to get more serious, and she suffered a series of frightening mini-strokes.

Thankfully, she recovered from all of them, but the storm clouds were gathering.

With heart failure, the heart becomes weaker and weaker, unable to pump blood throughout the body. As a result, my mother gradually lost her strength and energy. Her circulation was impaired, and she always felt uncomfortably cold. Her organ function began to decline, and she lost an alarming amount of weight.

Fortunately, she had lots of family support. She lived near my daughter and me in Invermere, British Columbia, and both our families were very involved in her care. She also spent several months each year back on the family farm in Saskatchewan, where my brother’s family cherished her as much as we did.

But after the age of 90, it was a straight downhill stretch. There were multiple short-term hospitalizations. Mum knew she was failing, with no hope of getting better. She began to wish for death. In December 2016, she began her annual Christmas letter: “I don’t know why I am still here. . .”

One month later, she was forced to leave her beloved house and move into an independent living facility since, as she put it, she could no longer trust herself. She began to forget things, as the reduced blood supply to her brain caused fuzzy thinking. My husband and I begged her to live with us, but she stoutly refused to become a burden on anyone.

She lost her appetite and had to force herself to choke down a few bites of food. Formerly very sociable, she didn’t like being in groups because she could no longer hear properly or follow the conversation. She had to use the bathroom so frequently that she never had an unbroken night’s sleep.

With her brain starved of oxygen, she now had trouble reading books, and even watching television. She lost her ability to play the piano, something she had done every day of her adult life. One by one, everything that she enjoyed doing was taken away from her.

The slightest exertion left her dizzy and gasping for breath. She began to use an oxygen tank, which she hated. Her legs became so weak that she couldn’t walk more than a few steps without the support of a walker, which she also hated. Her circulation was so poor that her feet swelled and turned blue. The doctor hinted that in future, it might be necessary to amputate.

The final medical procedure she underwent was an attempt to open the blocked veins in her legs, to allow increased blood flow to her feet. It was a total failure. From my mother’s point of view, this was the last straw.

Poor Mum was utterly miserable. She spent most of her time sitting in her armchair, worrying about what ghastly and humiliating horrors lay ahead.

In October 2017, she asked me to make a doctor’s appointment to discuss the concept of medically assisted death. A local doctor came to her apartment, gave her the application form, and told her that she would probably qualify.

From then on, things happened quickly. Mum filled out the application and two close friends witnessed her signature. I faxed the form to the MAiD coordinator in Kelowna, who processes the applications for the Interior Health region of British Columbia. (At the time, she had 200 applications on her desk).

As required by law, two local doctors willing to participate in the MAiD program examined her separately and gave their opinions, independent of each other.

Here’s what is required to qualify:

You don’t need to have a terminal illness, but you must have a “grievous and  irremediable medical condition” for which everything has been done, and no further treatment is possible.

You must feel that your life is intolerable. When the doctor asked my mother why she felt that way, she burst out: “I just can’t DO anything!” For my formerly lively, energetic mother, simply existing did not make her life worth living.

Your death must be imminent. This is something of a grey area, but the doctors who examined my mother told me that they interpreted this to mean “within six months.” (Currently new legislation has been introduced, but not yet passed, to remove this requirement. For details, click here: Medically Assisted Death in Canada.

Their decision came back almost immediately — she was approved.

Suddenly it became very real. I hadn’t been sure whether she would qualify. Now the only thing left was to go through the mandatory 10-day waiting period, which is required so that applicants can reflect on their decision, and then choose a date.

I suggested that she wait six months or even six weeks, but her mind was made up. “I just can’t take that chance,” she told me.

Currently you must be fully aware and able to give your verbal permission before the procedure is carried out. You cannot give your permission in advance, or grant that right to another person.

If she suffered a fall or stroke or something else that rendered her unable to give her verbal permission at the last moment, then it would not happen. Mum dreaded being conscious and incapacitated in a care home, a state that she considered far worse than death.

She chose the date: November 22, 2017. Then came the hardest time of all — the waiting. It is an incredible strain to wake each morning and think: “My mother has only five days left, then four, then three, then two . . .”

But she was ready. At the age of 93, there was nothing left on her bucket list, and no regrets. She had spent the summer as usual at my brother’s farm, visited with the grandchildren, and attended a family reunion.

When I asked if she wanted me to notify any of her friends, she said sadly: “There’s no one left.” She was the last surviving member of what was once a wide circle of friends.

She decided not to inform anyone in advance but her immediate family. Over the last couple of weeks my two siblings and all seven grandchildren had a chance to say goodbye, which was painful and exhausting for everyone. My soft-hearted mother hated to see anyone unhappy, and it was a terrible strain having to comfort her loved ones and explain why she was making this decision.

My sister flew out from Vancouver a couple of days beforehand. On the fateful morning, we dressed Mum in her favourite nightgown, fixed her hair, and made her comfortable in her own bed. She was calm and relaxed, and even cracked a few jokes.

The two doctors arrived together, bearing a plastic cooler with the medical supplies inside. My sister and I were asked to leave the room while the doctors made sure that Mum was in her right mind and determined to go through with it.

When we returned to the bedroom, the doctors said they would first administer an anaesthetic to put her to sleep, as if she were about to have surgery. We kissed her goodbye. Then we sat on either side of the bed, each  holding one of her hands, while the doctors inserted an IV in her arm and started the drip.

With remarkable composure, my sister sang “Gonna Take a Sentimental Journey.” Mum turned and looked at each of us with one last loving smile, then closed her eyes and fell into a deep sleep.

The doctors told us that she was no longer aware of our presence. We had the option of staying to watch them administer the intravenous drug that would stop her heart, but we chose to leave.

We stumbled outside and drove to my daughter’s apartment just a few blocks away. We had barely gotten inside the door when my phone rang. “My deepest condolences,” the doctor said. “You mother passed away a few minutes ago.” Death must have been almost instantaneous.

I had previously arranged with the funeral home to have a vehicle standing by. Her body was removed immediately, and taken away for cremation. We never saw her again.

Helping my mother arrange her own death was surreal. I have never had an experience in my life when my head and my heart were at such complete odds.

I knew in my head it was the right thing for her, and I promised to honour her wishes — but oh, my heart found it so hard!

As those of you know whose parents have died, it’s one of life’s greatest losses. I still think of her several times every day, often with tears. My only consolation is that I know it was what she so passionately wanted.

Now I have fulfilled her final request — to lobby for improvements to the MAiD legislation, to make it easier and more socially acceptable for people to have the final say in their own lives, and to die with dignity.

My mother was a very special person who led a long and active life. I hope you will read about it here: June Florence Obituary.

This photo was taken at the farm in Saskatchewan on my mother’s 90th birthday, six years ago today. Mum said that celebration with family and friends was one of the highlights of her life. Here are the four generations: Mum and me, with my daughter Katie and my granddaughter Nora. 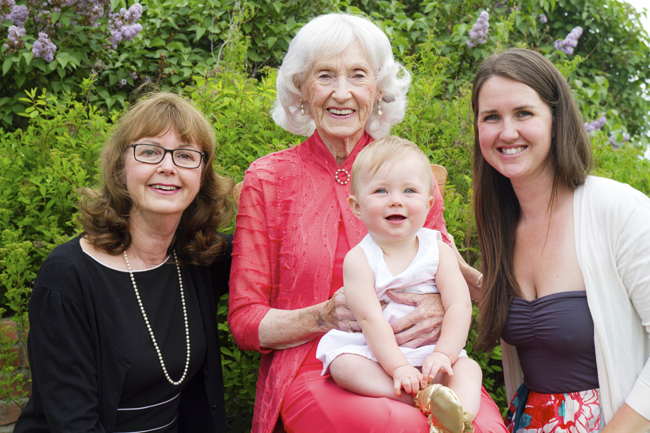 Friends, it would make me happy if you would share this post far and wide, as per my mother’s request. If you agree in principle with medically assisted death, and I’m aware that not everyone does, please feel free to forward your email link if you are a subscriber; or copy and paste the internet link and share with your social media and mailing list. Thanks so much!

I hope you are enjoying the summer, and I promise to write about a lighter topic next month. Affectionately, Elinor