Danesfield House is now a luxury hotel, but during the war it was requisitioned by the Royal Air Force, renamed RAF Medmenham, and served as the headquarters for aerial photographic interpretation. It has personal meaning for me, too. 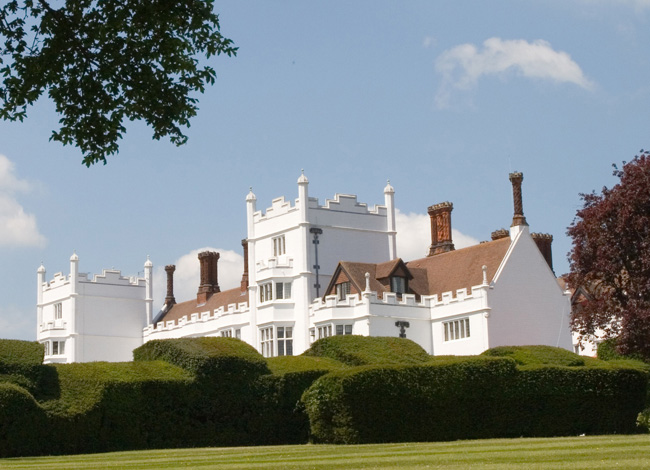 My wartime novel Bird’s Eye View is fact-based fiction, the story of a Canadian woman who works at RAF Medmenham as a photo interpreter. To read one thrilling chapter, click here: Bird’s Eye View Excerpt.

Readers often ask about the striking white mansion pictured on my website, and on the back cover of my novel. This place has special meaning for me. First of all, it served as the headquarters for the Allied Central Interpretation Unit during the Second World War.

My fictional heroine Rose Jolliffe, along with hundreds of other interpreters, worked inside its walls. I have envisioned her there so many times that I feel as if I toiled there myself, perhaps in another life.

And I also have a personal anecdote about someone who worked in this lovely building.

But first, a little history:

The mansion was built in 1901, so it isn’t nearly as historic as many other British stately homes. Of course, to us here in Canada, anything built back then is considered ancient!

This private home was built by the heir to the Sunlight Soap Company, in the Italian Renaissance style, using the snowy white chalkstone native to this part of England, not far from London.

It wasn’t considered great architecture at the time. In fact, it was thought to be rather ostentatious. Locals gave it the nickname “The Wedding Cake.”

The building passed through several owners before being requisitioned by the Royal Air Force – the house and all sixty acres – to be used as the headquarters for photo interpretation.

It was ideally situated in Buckinghamshire, not far from Bletchley Park (headquarters for British Intelligence), about an hour west of London by train, and a few miles from the reconnaissance airfield down the road.

So it was transformed into an air force station. Although the paintings and carpets were removed, the interior remained very grand. Here’s a photo of the main hall today – you can see how it must have been a nice place to spend the war, especially if you came from more humble origins. 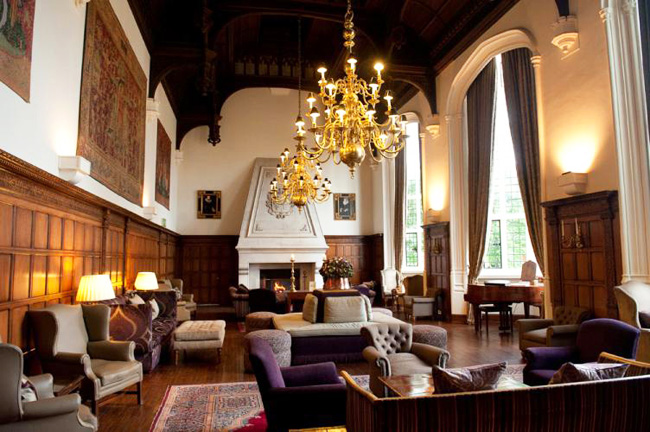 This particular branch of intelligence began with about forty interpreters. As the vital importance of photo interpretation continued to develop (pun intended), more interpreters were added until there were about six hundred by war’s end – more than half of them women.

RAF Medmenham was involved in the planning stages of practically every military operation and aspect of intelligence. The rooms on the second floor were converted into offices, perfect for studying aerial photographs because the lovely paned windows allowed so much natural light.  Here’s a photo of the interpreters hard at work inside one of the beautiful interior rooms, hanging their photographs over a marble fireplace.

You can see the device used by the interpreters called a stereoscope, looking like a pair of spectacles on legs. This allowed them to view the photographs in three dimensions. 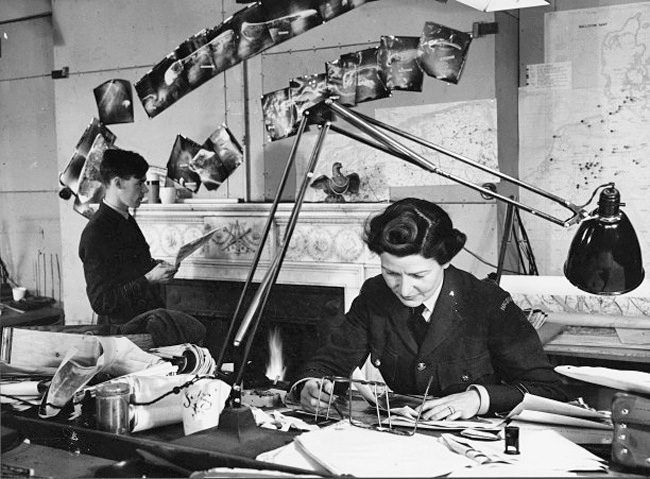 The interior rooms, now converted into guest bedrooms, had large bay windows, which allowed plenty of natural light. This exterior photo shows them along the upper storey. 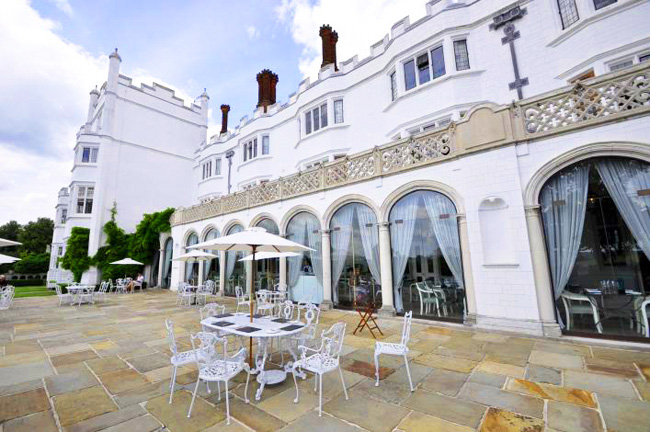 Now, of course, the rooms where all the magic happened have been converted into bedrooms like this one. You can see the multi-paned bay windows here from the inside. 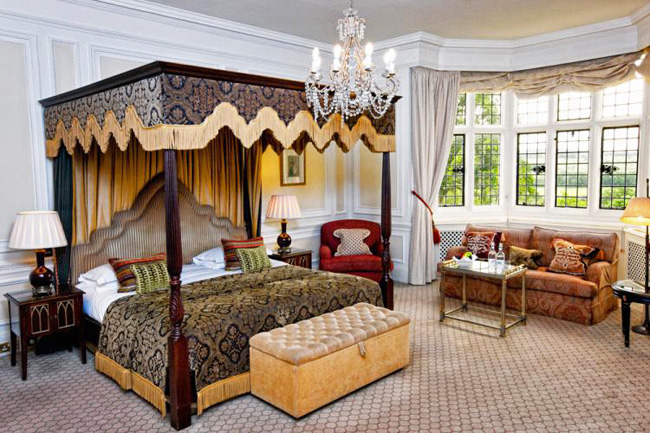 To accommodate all the interpreters plus support staff, wooden structures appeared like mushrooms scattered over the landscape. It was unfortunate that the beautiful grounds had to be treated this way, but there was a war on.

After the war, the building and grounds were purchased by the Air Ministry in 1948 and was used by the ministry for the next twenty-nine years.

During this time the RAF residents formed a club called the Hell Fire Club whose members one night piled up all the tables and chairs in the grand hall and left a footprint on the ceiling!

The property remained in the hands of the RAF until 1977, when it was sold to Carnation Foods to be used as their corporate headquarters.

More recently, Danesfield House Hotel opened on July 1, 1999 as a four-season luxury hotel. See how beautiful the garden looks in winter. The hotel even offers a Christmas Day champagne brunch. This is definitely on my bucket list! 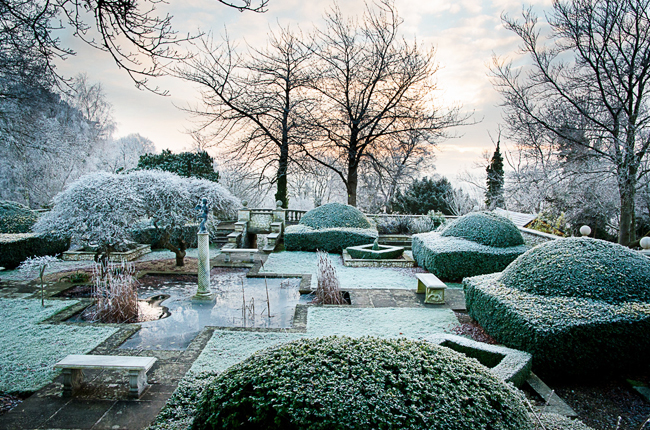 And now for my personal anecdote: Way back in 1999, just after the hotel opened, my husband and I visited this gorgeous spot. We walked around the property, admiring the views of the nearby Thames River flowing smoothly past the grounds. The view hasn’t changed much in centuries! 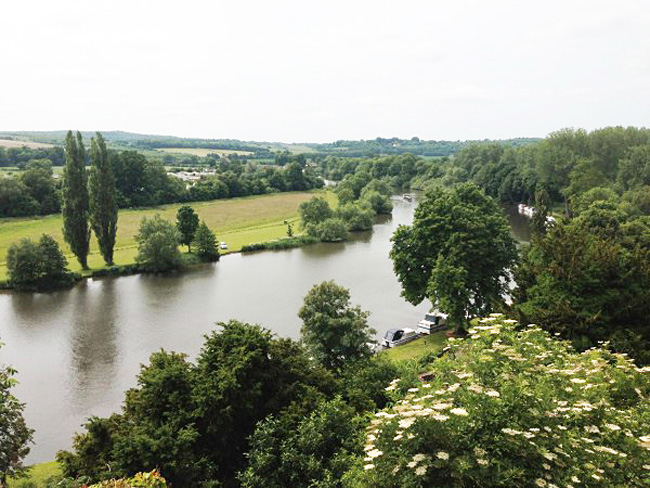 While I was waxing rhapsodic over the house and the grounds, I pointed up to one of the windows and said: “That’s the room where Rose was working, and this is the view she could see from the window!”

A very elegant lady approached and asked me politely what I was talking about. She informed us that she, Eileen Scott, had worked at RAF Medmenham during the war. She was a member of the Women’s Auxiliary Air Force serving as a clerk in the Photo Unit.

Even more amazing was the fact that Eileen had not returned to the mansion since she left at the end of the war – until that day, more than fifty years later!

It was a most auspicious meeting. Eileen was thrilled to find somebody interested in her past, and I was overwhelmed with excitement to interview somebody who remembered those exciting days!

Here’s a photo of the two of us, standing on the patio! 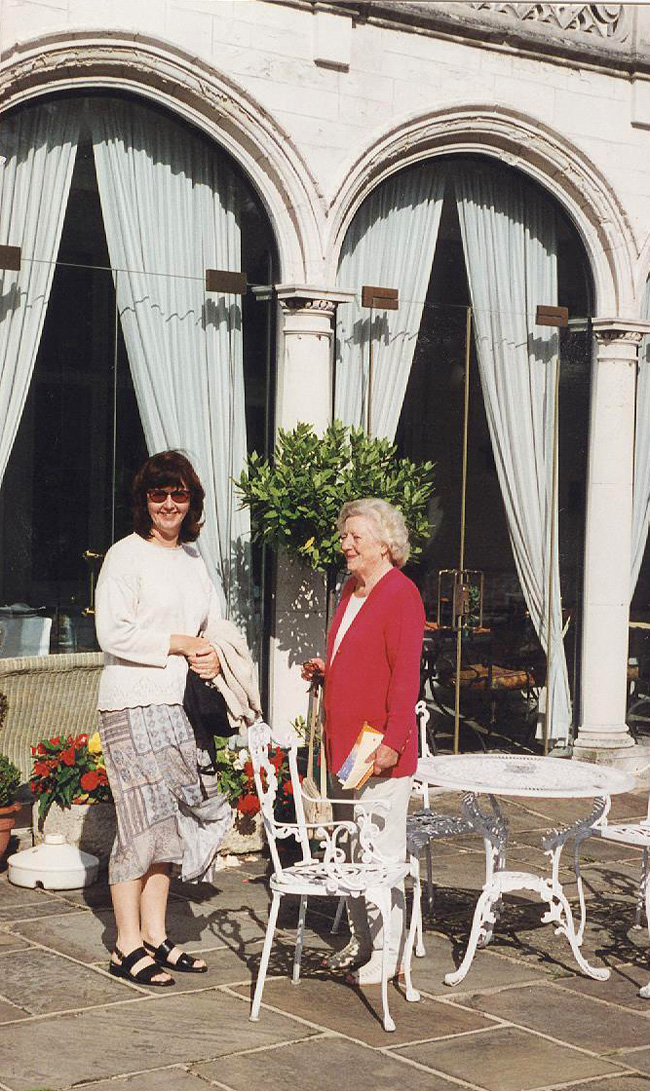 We invited her for lunch, and as we sat beside the huge arched windows leading onto the stone patio, I grilled her for tidbits for my book.

For example, she told me that the girls were not allowed to keep pets, but that they had a secret cat called Wisteria, named after the beautiful flowering vines that grew all over Medmenham’s walls.

The cat Wisteria used to climb up the vines at night and scratch at the windows until the girls smuggled her inside. That’s the kind of detail that doesn’t appear in the history books!

(Here’s what wisteria looks like, for those of us who live in colder climes.) 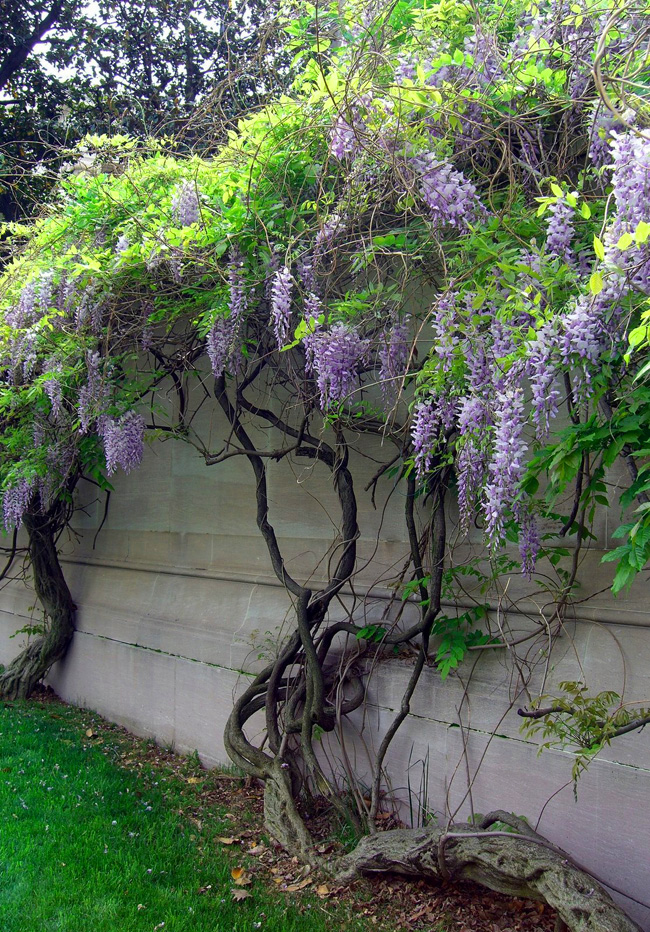 And here is some information about Eileen Nora Kennedy, whose life included both great tragedy and great happiness.

Eileen was a carefree young woman when war broke out. A few months later, at the age of twenty-two, she married her sweetheart Gordon Surridge.

Gordon enlisted in the RAF and became a pilot, flying the heavy, four-engine Stirling bomber. But on April 27, 1942, Gordon’s aircraft was attacked by a Messerschmitt fighter and he was shot down over Rostock, Germany.

The following was written by Eileen herself:

“Sadly, my young husband’s aircraft was hit by ack-ack fire, and although badly wounded, he parachuted into enemy territory. He was a prisoner of war, but taken to hospital where (I learned after) he was treated with honour and care. Despite medical attention, he died of his wounds.”

The heartbroken young widow couldn’t wait any longer to be called up, so she wrote to a woman Member of Parliament and begged her to speed up the process. She did, and Eileen became a member of the Women’s Auxiliary Air Force. After her initial training, she was posted to RAF Medmenham.

This is a photo of the young and beautiful Eileen Surridge in uniform. 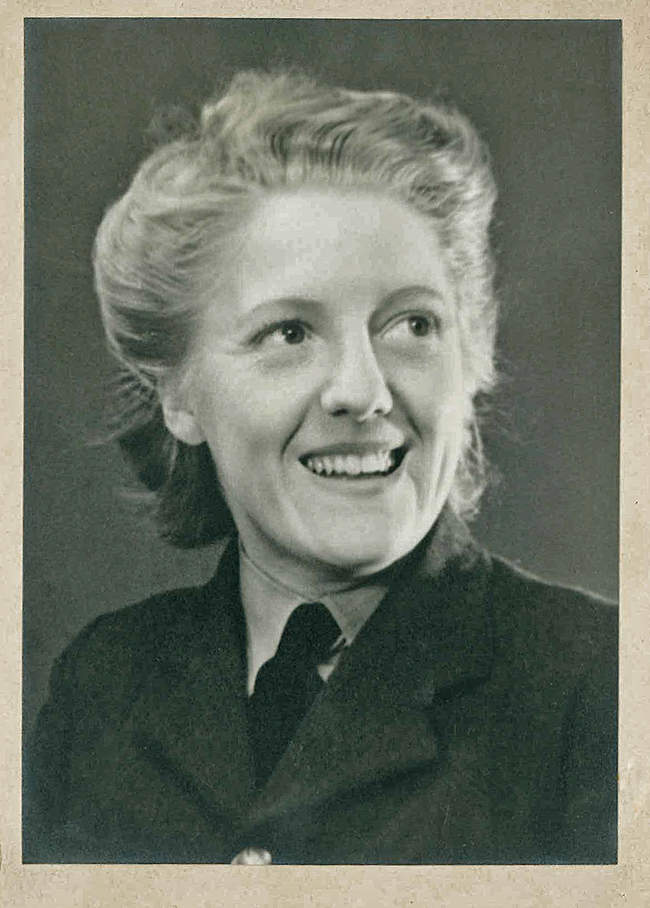 And here’s how Eileen described the balance of her war years:

“We worked on a three-watch system and had to learn to sleep during the day. It felt good being part of a vital setup, giving the maps and detailed intelligence to the RAF primarily, but also Navy and Army.

“We only knew in detail our part of the great effort, but not the overall pattern until D-Day arrived. Despite all the terrible battles raging across the Channel, we knew we were on the way!

“I had already volunteered to serve overseas, and after the Battle of the Bulge I was informed I would be sent on a course in Cheshire to prepare for an overseas posting to the Southeast Asia Command. Before the course finished — wonderful, wonderful — the war in Europe was over!

“I am ashamed to say I went AWOL (absent without leave) for three days to go down to London to search for information about my husband. I thought perhaps I might get more details from his crew or anyone. It was a foolish, faint hope. I went back to Cheshire to join my course in disgrace and I met no sympathy, just fourteen days of punishment.”

But Eileen’s name was still on the overseas roster, so she was seconded to a unit in Germany, serving at the headquarters of the British Army of the Rhine.

“I ended my service in the Allied Counter Intelligence Unit with experts from many Allied countries tracking down war criminals, ex-Nazis, Gestapo, Concentration Camp officers. All very bad people.”

In conclusion, Eileen had this to say: “This I must add — I am glad I went to Germany and saw the dreadful destruction inflicted on the towns, villages and countryside after bombing and violent battles – far worse that we in Britain had received. I realized how many ordinary people – mothers, children, old people – the innocent had suffered. I realized the true horror of war.

“Despite the awful tragedies my family had endured, I felt little bitterness. No one seemed to have won.”

Eileen remained a widow until 1950, when she married Herbert Archer Scott (Scottie). He had fought in Italy and been badly wounded at Monte Cassino with shrapnel wounds to both legs. He later became a chartered accountant and the couple had three children.

I am bitterly disappointed that Eileen died in 2008, and thus never saw my book in print.

But I will think of her when I return to the lovely, historic, haunted Danesfield House, where I will wander the gardens and halls once again, imagining the lives of Eileen Scott and the other dedicated people like her who helped to win the war for all of us. 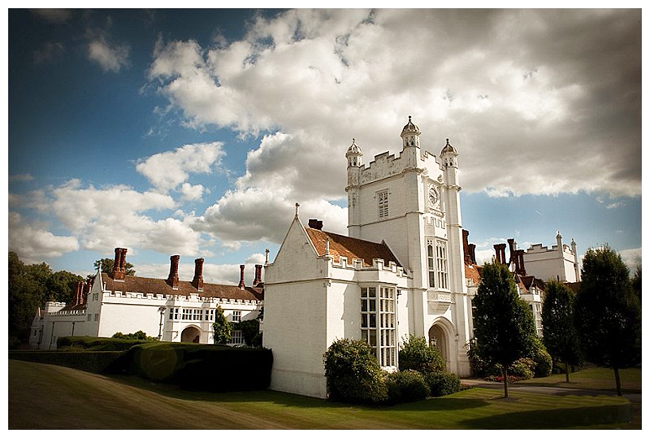 I even requested that an image of the mansion be added to the back cover of my novel. Isn’t it simply lovely? 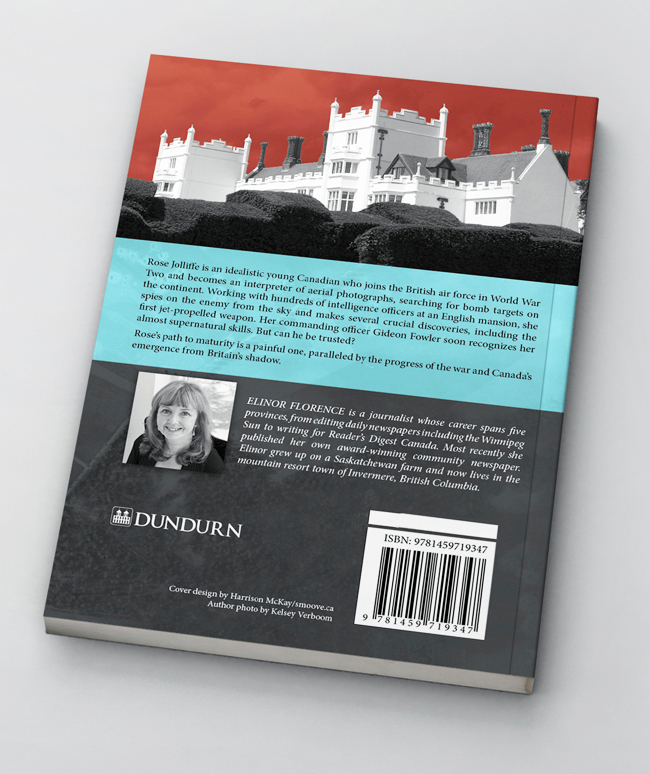