My friend Russ Jeffs was a Royal Air Force veteran who rose to the rank of RAF Wingco, or Wing Commander, before leaving England in the 1950s and moving to Canada. He was an inveterate story-teller with an endless stream of anecdotes about his days in the air force. 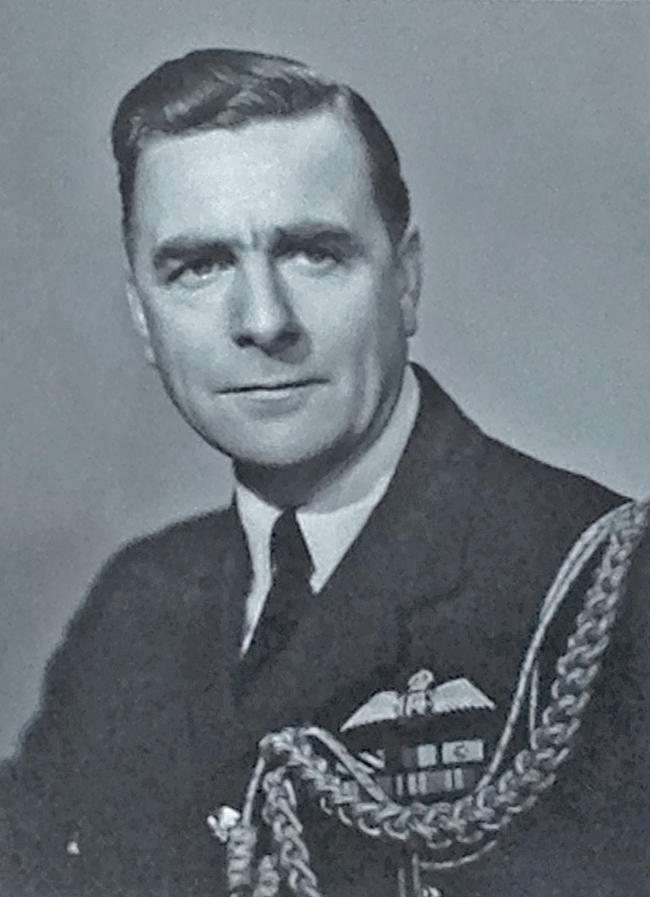 After Russ moved to Canada, he spent the next twenty years as a Social Worker for the Government of British Columbia. He was divorced when he met my aunt, and they dated and travelled together for many years, although they never married. During that time Russ became like a member of our family.

After my aunt died, Russ returned to England and spent his remaining years at a flat in Twickenham, a suburb of London.

When my husband and I visited him there back in 1999, Russ was 86 years old. He was such good company that we decided to invite him on a two-week driving tour around England, all the way up to Yorkshire.

It was a wonderful experience to hear wartime stories first-hand from an air force veteran. And Russ was a natural story-teller. As we bowled along, he’d point out the window and say things like: “I pranged my kite once in that field over there!”

He also had a great sense of humour. When we trespassed on private property and snuck up to peek in the windows of Allerton Hall in Yorkshire, just because I was curious to see the former headquarters of the Canadian Bomber 6 Group, Russ said: “Now, if the groundskeeper comes along, I’ll pretend that I’m senile and my last wish in life is to see Allerton Hall. And then you tell him that your poor old Dad has never been the same in his head since the war!” Fortunately, we weren’t caught.

One of the places we visited was RAF Medmenham, the headquarters for aerial photo interpretation and the setting for my novel, Bird’s Eye View. So naturally we had our photo taken in front of the stately mansion, which is now a luxury hotel called Danesfield House. (To read about this wonderful place, click: Medmenham: Where the Magic Happened.) 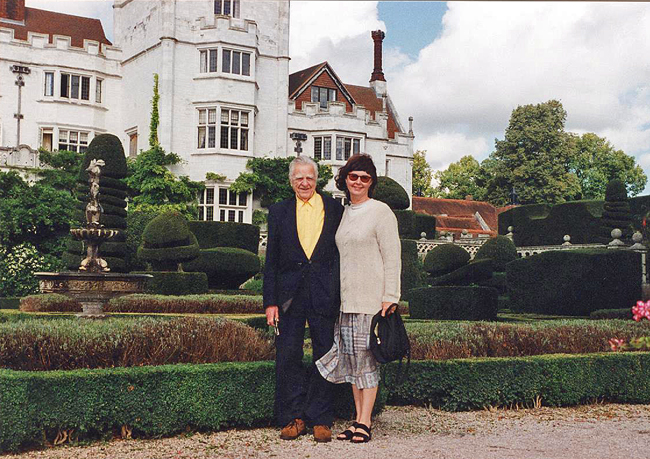 Before I continue, here’s some biographical information about Russ, from his lovely eulogy, written by his son Brian Jeffs.

Russell Jeffs was born in Canterbury on December 7, 1913. On leaving school, he worked as a journalist while learning to fly. He joined the City of London Auxiliary Air Force Fighter Squadron in 1932 and transferred to the RAF’s High-Speed Monoplane Flight in 1935.

Russ always had a reputation for being a tad impulsive. Before the war, he and his wife were spending the day with their friends. The ladies headed off to do some shopping while the men went to the nearest pub. At the appointed meeting place, the men never showed up.

Quite late that evening, they returned home looking sheepish and explained that Russ had decided to show his friend the wonders of flight first-hand, and what better way than in one of His Majesty’s aircraft, flying to Paris and back?

Following were assignments flying in Africa, India and Burma. He also served with the 82nd West African Division, and encountered the Japanese in a couple of fearsome clashes.

After the war, Russ was posted to the U.S. to help found an all-weather flying division. In 1950, he became the Air Attaché to Copenhagen. The Cold War was at its deepest, and Russ helped establish an intelligence-gathering network with the fishing trawlers that roamed the Baltic Sea.

In a flying career that spanned more than two decades, he flew everything from a fragile bi-plane to a jet aircraft.

Retiring from the RAF in 1956, he went to the United States and then Canada, and did not set foot in Britain again for 25 years.

Recalling his initial impressions of America many years later, he wrote: “The contrast between the States and Britain was quite overwhelming – like coming into bright sunlight from a long, dark tunnel.”

He did, however, reconnect with his roots – including his beloved 207 Squadron – after his return to England.

On our driving tour, I jotted down several of Russ’s stories. And now I have dug out my little red notebook and transcribed them here, for your enjoyment, in Russ’s own words:

One day a bomber landed on my airfield as I was standing on the side of the runway. The crew baled out in a hurry and as the pilot ran past, he yelled: “Cookie on board!” A cookie was a 4,000-pound bomb!

I turned and ran away as fast as possible. When the bomb exploded, the blast was so powerful that it sent the ambulance, which had been tearing towards it at top speed, backwards at the same rate of speed, just as if the driver had thrown the vehicle into reverse!

One day before the war, I was flying a Tiger Moth when the engine simply stopped dead and the aircraft fell out of the sky like a stone, skimming the backs of some woolly sheep that were grazing in the field below, before striking a low fence and flipping upside down on its back. My co-pilot and I were shaken up but unharmed.

The cause of the accident was a mystery, until I recalled that my co-pilot had been studying the map at the time. When the co-pilot unfolded the map, his hand struck the controls and shut off the engine. If I had had a minute to think, I could have checked the controls, but the accident was instantaneous. Fortunately, neither of us was hurt.

Icing was always a problem. Once before the war, I was flying over the North Sea when the tail iced up – the point where the body meets the tail – and the aircraft began to descend. I really thought we were done for.

I was within 100 feet of the waves before the ice thawed and I was able to pull it up. There was no point in baling out, as the plane was too low. We wouldn’t have survived the icy water anyway. That was a close call.

I remember when a pilot baled out and landed in a field, and was then driven back to his base. But when they went to look for the aircraft, it had vanished! There was even some doubt about the pilot’s story, although he had the parachute to prove it.

Finally the plane was discovered – it had struck the ground vertically and gone straight into a below-ground pit that nobody knew was there. Because of the angle, the hole wasn’t discovered until a thorough ground search was made.

A pilot once landed on my airfield with an unserviceable aircraft and wanted a lift home to his own base. Another aircraft had room for him in the tail gunner’s position, so off they went.

But the guy was unfamiliar with the peculiar rocking, shifting, twisting motions experienced in the tail, and he became convinced they were going to crash! He crawled forward and opened the hatch.

The pilot told the co-pilot to go back there and find out what the hell was going on. The co-pilot crawled back and remonstrated with the guy, who was determined to jump. The co-pilot tried to hold him back, and while they were struggling, they fell out! Both men deployed their parachutes and survived.

The pilot continued merrily on to his base and landed the aircraft. He was utterly surprised when he arrived to find that he was flying alone!

(This is my all-time favourite Russ story.)

On my way back from a bombing raid, I lost my course and landed in error at Biggin Hill. I was surprised to find the station in complete darkness, but I soon discovered that it wasn’t on ops because it had just been occupied by the Americans. Someone was roused and found me a bed for the night.

The next day in the mess, I was surrounded by a group of eager young Americans.

“Where did you come from?” they asked.

“Genoa! What part of Germany is that in?”

“Were you bombing it?”

By this time, more American flyers had gathered around.

“Come on, you guys!” one of them said. “Here’s somebody who knows all about it!”

They hastened to inform me that they were going on their first mission on Thursday, to Wilhelmshaven.

“No security at all,” I thought to myself, shaking my head. (Air crews were not supposed to know ahead of time where they were going, nor tell anyone else).

But I replied encouragingly: “Oh, that’s a piece of cake! I’ve been over three or four times!”

There was general jubilation at my words. Everyone was happy and excited that Wilhelmshaven wouldn’t be too difficult.

“Just remember to keep the town between yourself and the moon,” I told them helpfully. “Then you can fly straight in, drop your load, and turn away sharply.”

More excited discussion among the Americans, and then someone asked: “I don’t quite understand this about the moon. Can you explain it again?”

So I repeated the instructions: “Keep the town between yourself and the moon, drop your load, and turn away sharply.”

The American replied in a puzzled tone: “But we won’t be able to see the moon. We’re going over in daylight.”

“Daylight!!!” I thought to myself in absolute horror.

“What would you do if you were going over in daylight?” he asked.

The mood immediately changed from joyful anticipation to utter gloom.

(Further to this story, Russ explained that it was difficult to tell the Americans anything. Their attitude was simply this: Please stand aside, and stay out of our line of fire. “The amount of resources they brought to bear was breath-taking,” Russ said. “You could barely comprehend how many men and weapons they had. They simply used brute force instead of strategy.”)

In spite of all the funny stories, there was some sadness, too. We visited Russ’s former airfield at RAF Langar and paid our respects at this memorial. Of course, Russ knew some of the men who died here, and he became quite emotional when he saw their names. This is a photo of Russ with my husband. 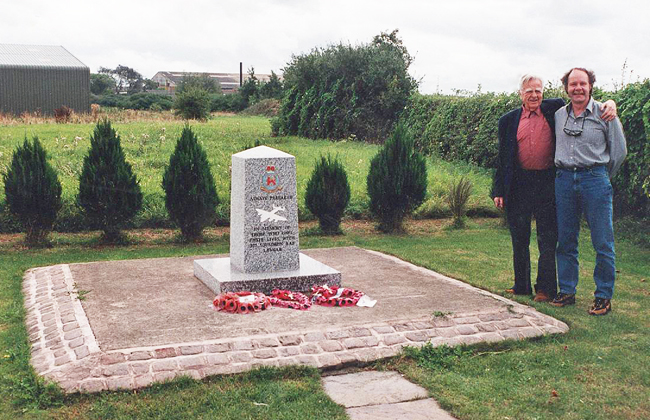 Russ was very proud of Britain for “Staring defeat in the face!” and even more proud of the RAF, which played such a pivotal role in vanquishing the Nazis.

To his dying day, he believed strongly in the absolute necessity of the world’s democracies to confront tyranny whenever and wherever they could. 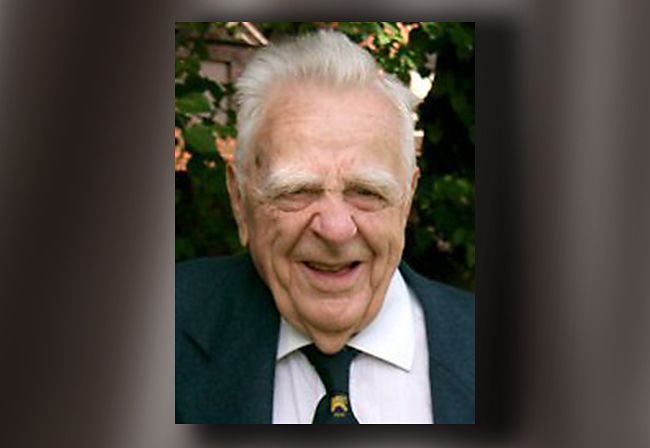 The Star Weekly was a weekly Canadian newsmagazine published by the Toronto Star. During the Second World War, a beautiful colour illustration appeared on the cover each week with a wartime theme. This week, in honour of Russ Jeffs, is an image from April 19, 1942 — of the RAF giving the Nazis what they deserve. To see my collection of covers, click Star Weekly at War. 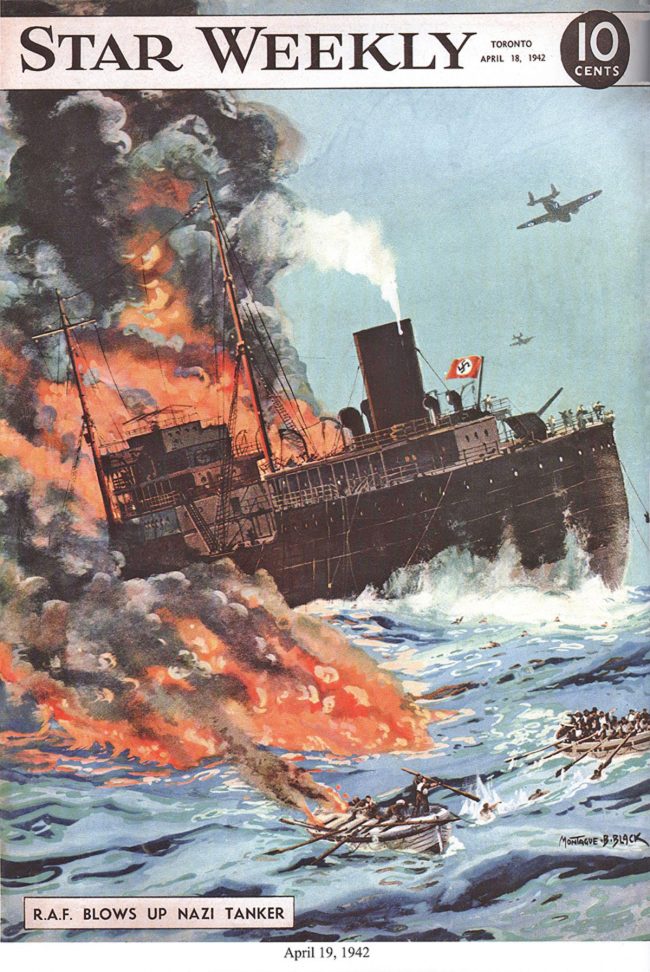