Four long years ago, reader Emily Tucker of North Battleford, Saskatchewan, asked me to find the owner of this Royal Canadian Air Force souvenir bracelet. After an exhaustive search, I located the owner’s brother in Cambridge, Ontario! 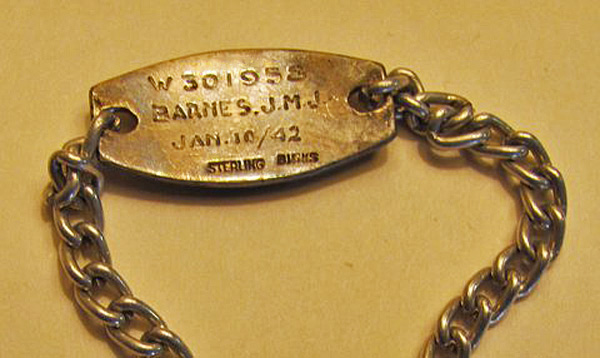 The mystery surfaced way back in 2013 after Emily Tucker of North Battleford, Saskatchewan sent me photographs of a bracelet bearing the name “Barnes, J. M. J.”

(You may read the original post here: The RCAF Bracelet Mystery).

Emily found the bracelet in her uncle’s effects long after he died, but she had no idea where it came from.

Her uncle was Elijah (Lige) Scargall, brother of her father Aner. This is a photograph of Lige in his Royal Canadian Air Force uniform. 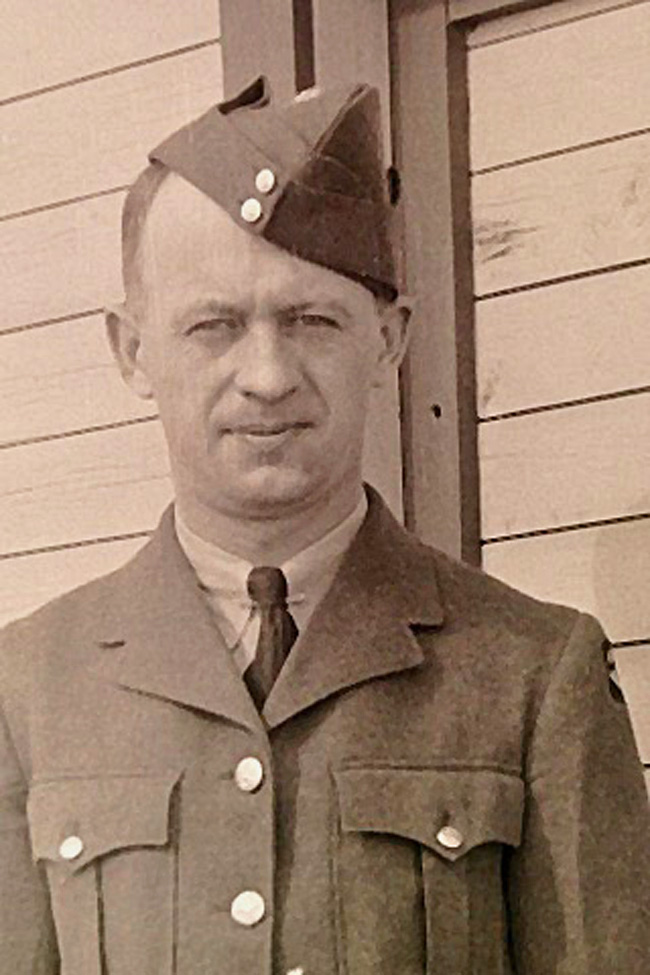 Both Lige and Aner were born in Lincolnshire, England, and emigrated to Saskatchewan with their family when they were young. The two boys were from a family of twelve.

Their brothers George and Tom Scargall both served in the Canadian Army. Emily’s father Aner enlisted as well, but was rejected for health reasons.

Lige served as ground crew in the RCAF. He married late in life and had no children, so that’s why Emily inherited his belongings.

Emily knows little about Lige’s service overseas. She recalls seeing letters sent from him when he was in Europe, bearing lots of holes cut out by the censor. And she knows that he was in Germany after the war ended, because he brought home some horrendous pictures of the death camps.

So when she sorted through his things, Emily generously decided to return the bracelet to J. M. J. Barnes, or a family member. She asked for my help in finding the rightful owner.

Over the past four years, I have been using all my sleuthing skills to find the bracelet’s owner.

I learned that these souvenir identity bracelets were fairly common in wartime, worn by both men and women, made in inexpensive metal, and don’t have much value in today’s marketplace. 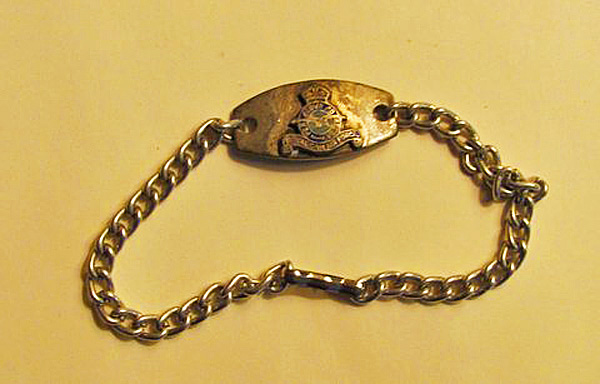 First I confirmed that the W in front of the number means it belonged to a woman, a member of the RCAF Women’s Division.

Because I had her service number, Veterans Affair Canada was able to tell me that her name was Jean Muriel Jane Barnes. It wouldn’t release any other information because I wasn’t a family member.

I didn’t know whether Jean was still living. In vain did I search the internet for her name, hoping that a newspaper story about her might surface, or an obituary.

I contacted the RCAF Airwomen’s Association, but they only have records of women who served after the war.

Last year, the story took an even stranger turn when a group of music students at the Banff School of Fine Arts stumbled across my blog and asked permission to create a performance piece about the mysterious bracelet! The students wrote a short play, set to music.

I was still hoping that someone might read my website and know something about the bracelet’s owner. But as the years passed, I began to lose heart.

Finally, in one last-ditch attempt, I wrote up a brief item and sent it to the Legion Magazine, where it was posted in The Lost Trails section.

And who should read the item but Jean’s youngest brother and only surviving sibling, 88-year-old Jack Barnes of Cambridge, Ontario!

Jack said he was astonished to read his sister’s name in the magazine and learn that someone was looking for her!

Sadly, Jean died in 1999 at the age of 79, but Jack and his two sons, Cory and Ron Barnes, were happy to provide me with some photographs of Jean, and the story of her life.

Jean’s parents moved to Saskatchewan from rural Ontario in the early 1900s, looking for work. Her father Norman Barnes was employed as a teamster. He met Mary Beatty in Regina, and they married and tried homesteading near Mazenod in southern Saskatchewan, before a succession of crop failures forced them to give up the prospect and return to Ontario in December 1928.

But before they did, their first seven children were born in Saskatchewan. Jean Muriel Janet (her third given name was not Jane, but Janet — Veterans Affairs was wrong) was born on the farm on May 6, 1920. She was the eldest daughter, with two older brothers.

When Jean was eight years old, the family returned to Ontario and settled on another farm, near her father’s home town of Elmville. The family had another three children, for a total of ten.

Jack was the youngest of the ten siblings, and he remembers that Jean was a loving older sister. “Jean always had a little one parked on her hip,” he told me in a telephone conversation.

Jean lived on the farm until she was sixteen, and finished her Grade 9. She then went to Toronto to work for her uncle, with the intention of going to high school. But the price to register for school was $16, and she didn’t have the money. Instead, she worked as a housekeeper for a doctor, and did a variety of odd jobs.

On January 10, 1942 (the date commemorated on the bracelet) Jean joined the Women’s Division of the Royal Canadian Air Force. Her family was very proud to see her in the smart blue uniform.

Here is Jean is on the right, and her friend Phyllis Champion on the left. Jean looks pretty proud of her uniform, too! 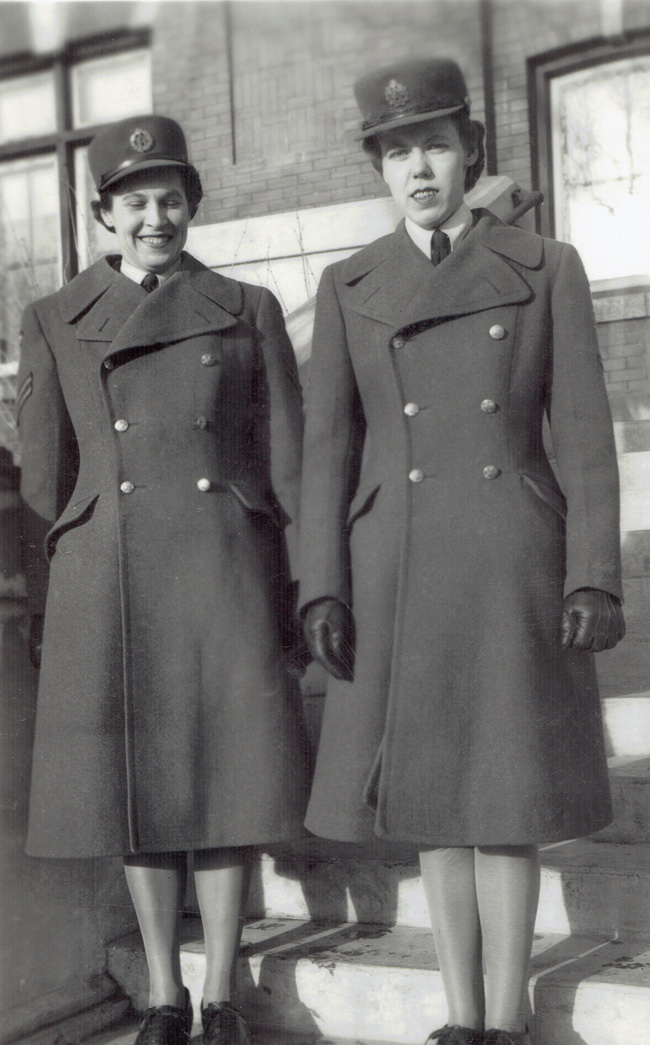 Her first posting was to Guelph, Ontario for a cookery course from January to March 1942, and her second posting was to the air training base in St. Hubert, Quebec.

At the time, the British Commonwealth Air Training Program was operating dozens of training airports across the country, for tens of thousands of aircrews from every Commonwealth country.

Here’s a photo of Jean on one of her visits home to the farm, complete with the family dog. 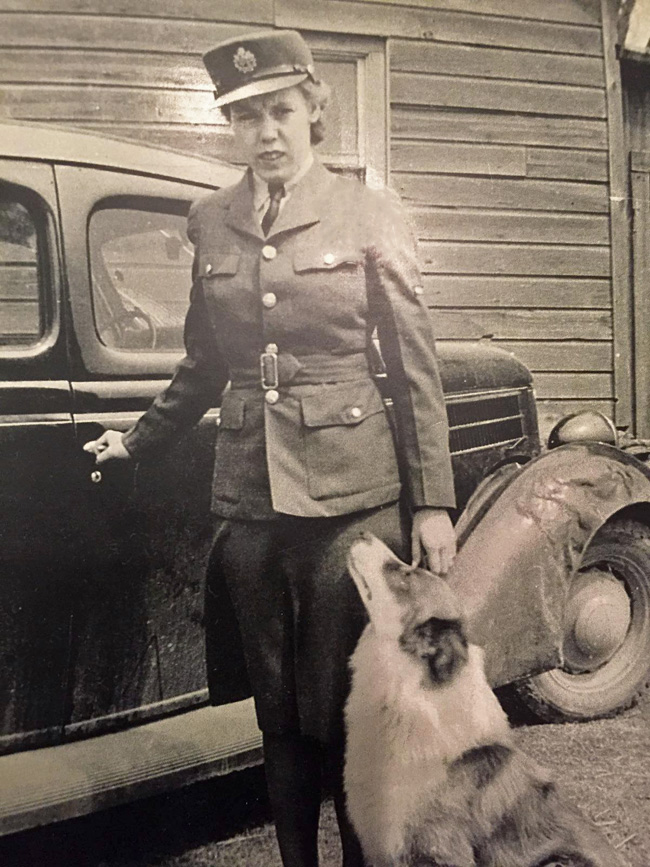 And here she is with two brothers who were also serving in the air force: Melbourne Barnes on the left, and Stan Barnes on the right. 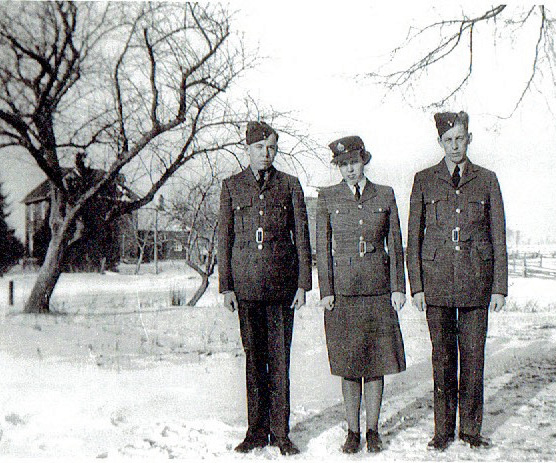 From Quebec, Jean was sent west to the province of her birth and was stationed at the air training base in North Battleford, Saskatchewan.

It appears that she was here from June 1943 to May 1945, when the Germans surrendered and the war was winding down.

She spent the last few months of the war, from May to August 1945, at the air training base in Paulson, Manitoba. From there she was sent to Winnipeg until November 22, 1945 when she was honourably discharged.

Like so many other women who served, Jean loved her four years in the air force. 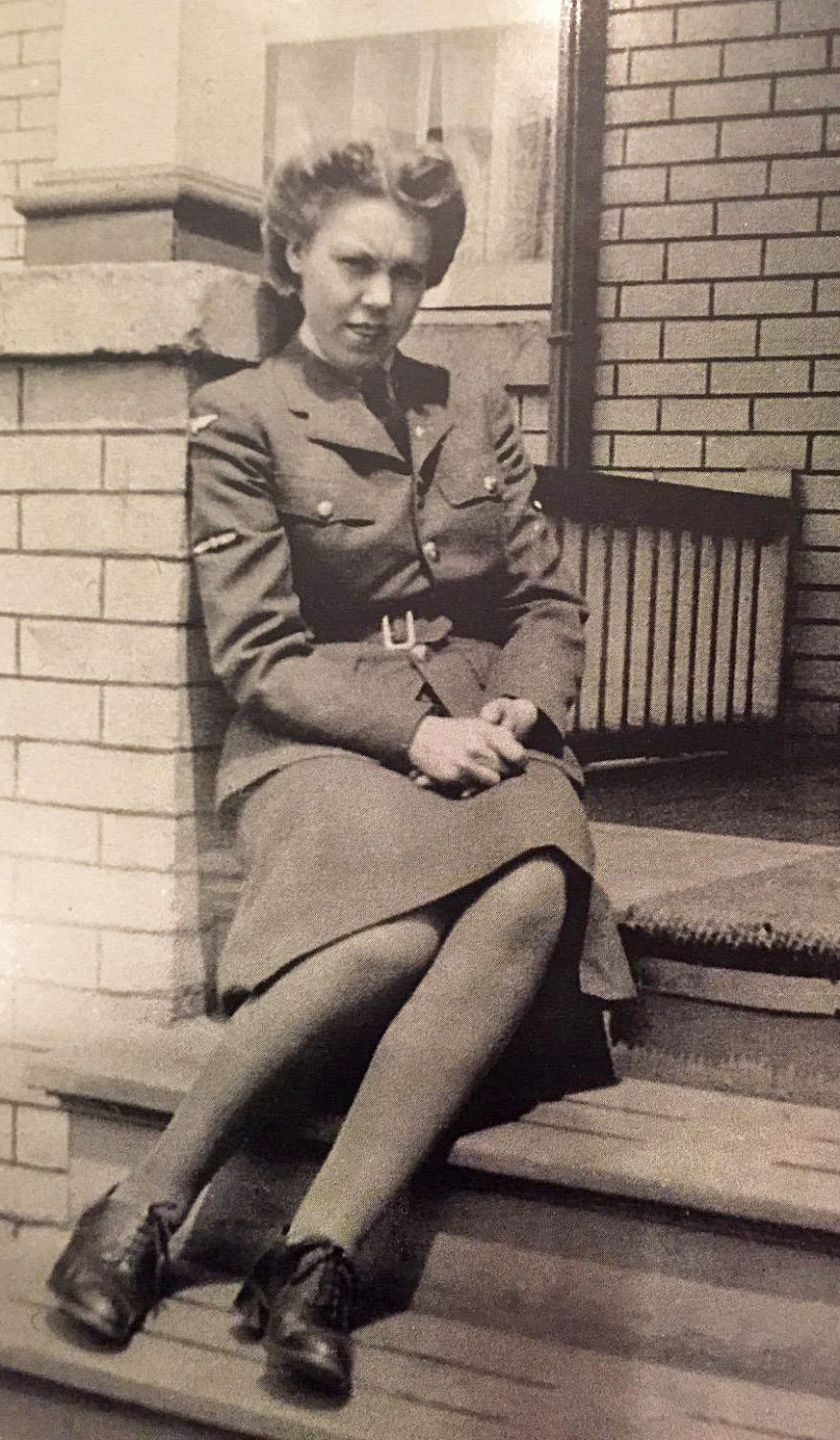 After her discharge, Jean settled in Toronto. It wasn’t until two decades after the war ended that she married Vic Blount. Although it was a happy marriage, by then it was too late for the couple to have children of their own.

When Jean’s husband died in 1992, she moved to Cambridge, Ontario, to be near her brother Jack and his wife Betty.

Jean Muriel Janet Barnes died in November 1999 and is buried in Mississauga, Ontario.

According to her brother: “Jean had a quiet, loving nature. She always had a very pleasant way with everyone, especially little ones. She helped our parents throughout their lives in many ways, and helped them to remain comfortable in their own home late into life. She was my favourite sister.”

Jack Barnes Sends His Thanks

Jack became a woodworker in 1946, and retired in 1989. He then made woodcarving his hobby. He carved an entire collection of horses and harnesses, attached to sleighs and wagons.

Jack’s wife Betty died recently, and he has been very busy cleaning out his house in Cambridge. So it was fortunate that he spared a few minutes to read the Legion Magazine and discover the item about his sister’s bracelet!

Here is Jack at his home in Cambridge, holding the bracelet that just arrived in the mail. 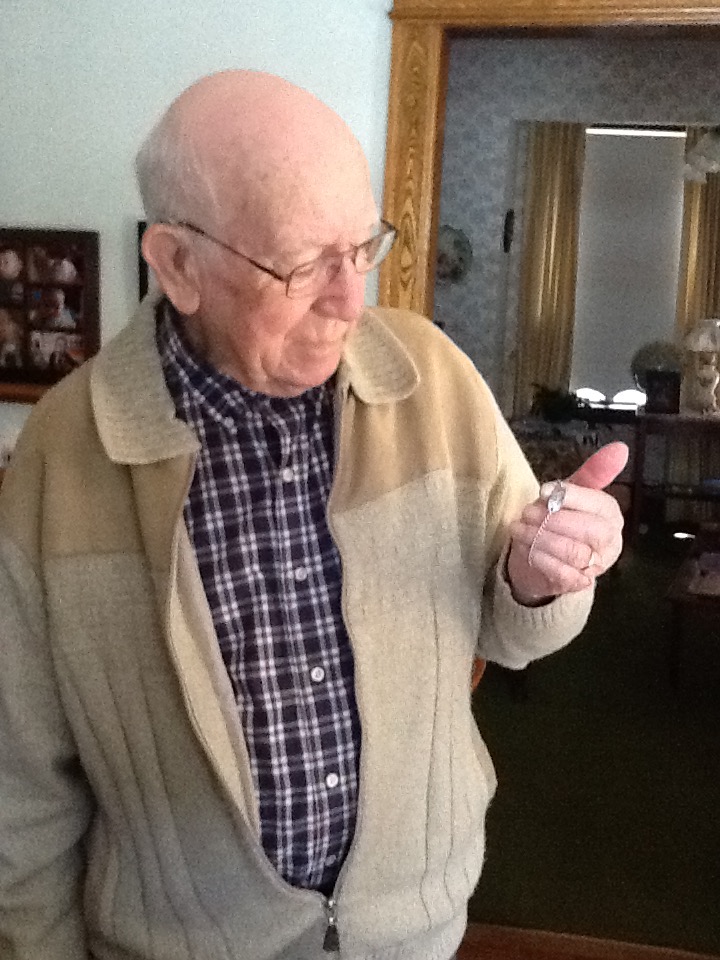 Jack was thrilled to receive this memento of his sister’s life. He wrote a thank you letter to Emily Tucker, and another one to me.

In his letter to me, he said: “This has been a very exciting event for me. I’m so grateful for all you have done. I’m thinking you got a lot of satisfaction yourself, since it finally came to a positive end.”

Yes, it was extremely satisfying for me to see the bracelet returned!

The final mystery is why Lige Scargall was in possession of Jean’s bracelet. Unfortunately, neither Jack nor Emily have any idea how this came about.

We don’t have their service records, so we don’t know their exact movements during the war. People who served in the air force got shifted around a lot, and with very little warning. 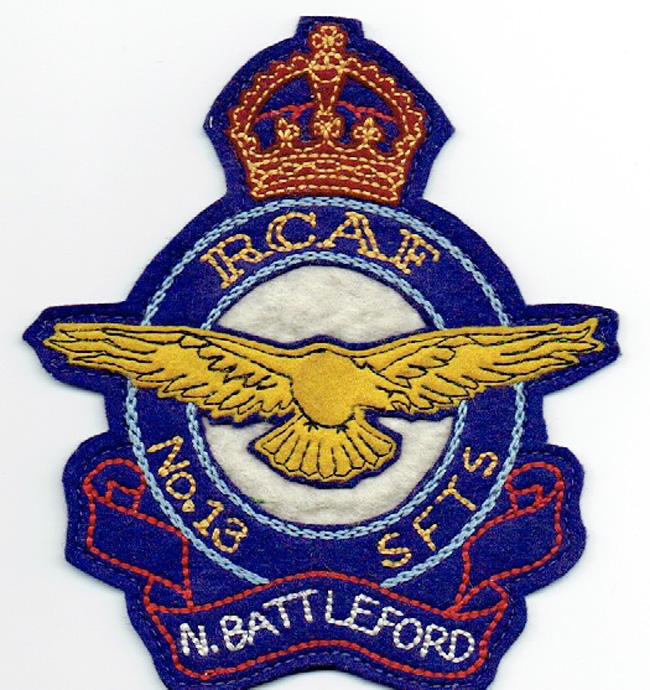 Being the incurable romantic that I am, I think they must have had a romance, or at the very least, a friendship. Perhaps Lige received the bracelet as a memento of their time together. Or maybe the kind-hearted Jean gave it to him as a good luck charm before he headed overseas.

In wartime days, communication was difficult. Perhaps in spite of their best intentions, Jean and Lige lost touch.

After the war, Jean returned to Ontario and Lige returned to Saskatchewan. He moved on to Calgary, where he worked in the construction industry and eventually married a woman named Mary. They never had any children. Lige died in 1977 and his ashes are buried in North Battleford.

I do think it is interesting, however, that both remained single for many years after the war. Was one or both of them carrying a torch for the long-lost lover?

And Lige kept the bracelet among his possessions until he died.

This final mystery is unlikely to be solved.

The Star Weekly was a Canadian newsmagazine published by the Toronto Star. In honour of Jean Barnes, here is an image of a member of the Royal Canadian Air Force, Women’s Division, dated July 11, 1942. To see my collection of Star Weekly covers, click: Star Weekly At War. 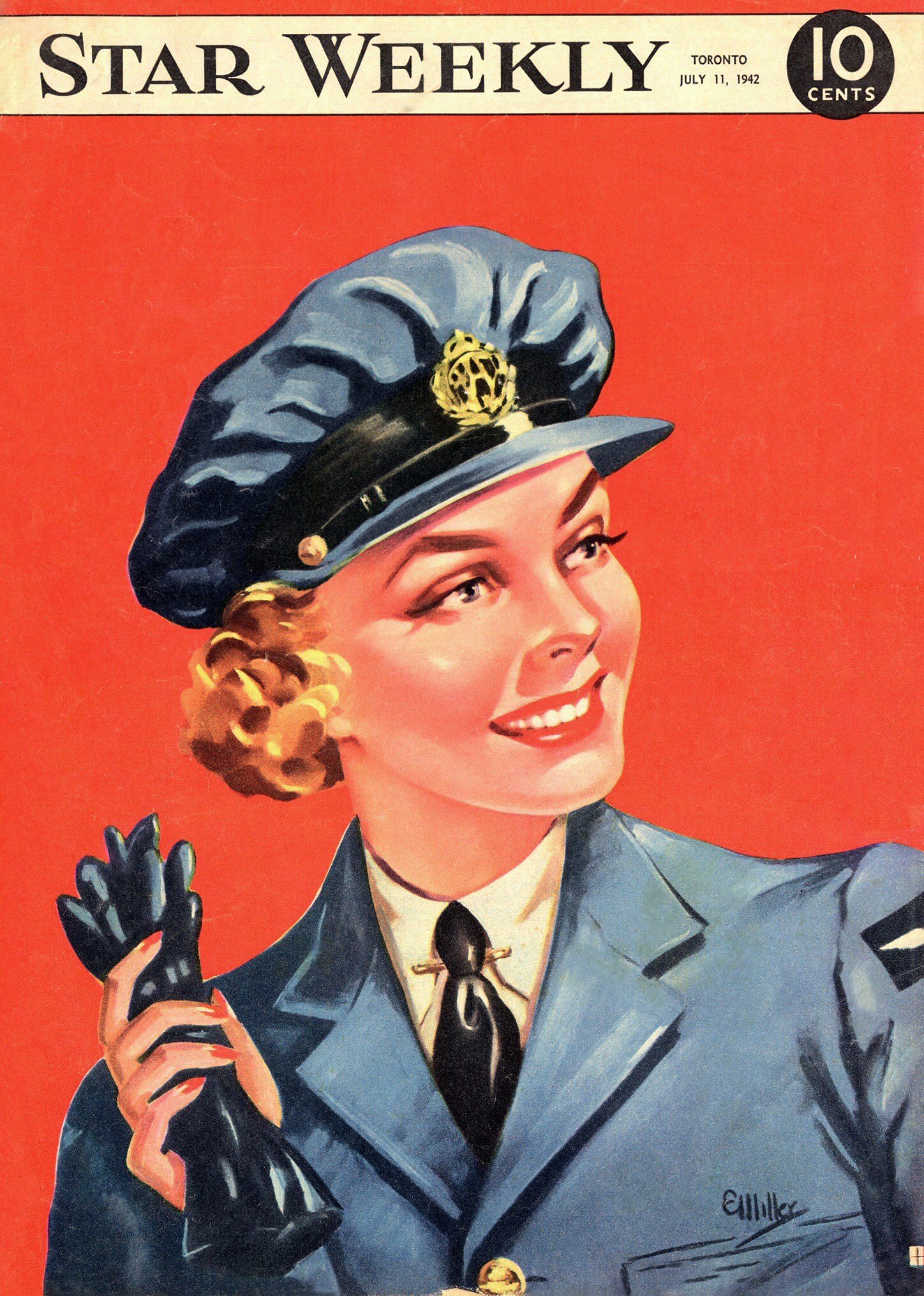