A case of mistaken identity thwarted Jim Milne’s plans to fly against the enemy, so he spent the war in Canada as a navigation instructor instead. When not on duty, he sketched some very amusing cartoons in his flying logbook!

Now 97, Jim Milne lives with his wife Betty in the pretty mountain resort of Invermere, British Columbia — the same town where I also live with my family.

The two men married the beautiful Amundsen sisters of Claresholm, Alberta, Audrey and Betty, and that’s how they became both friends and family members.

Both men also served in the Royal Canadian Air Force during World War Two, although their experiences were quite different. Ben went off to face the enemy, while Jim reluctantly remained at home.

James Fraser Milne was born in Winnipeg on February 3, 1920. His father David Milne was a Scottish immigrant who worked as a salesman; his mother Louise was a farm girl from rural Manitoba. Jim was an only child. “My parents recognized perfection,” Jim explained with a twinkle in his eye.

The clever young man finished high school and enrolled in the University of Manitoba to study geology. But like so many others, his plans were interrupted by Hitler.

On April 12, 1942, Jim left university and joined the RCAF with the same ambition as many others: to become a pilot and attack the enemy. He did his basic training in Brandon, Manitoba; his first level Initial Training School in Regina, Saskatchewan; and his second level Elementary Flight Training School in Virden, Manitoba. 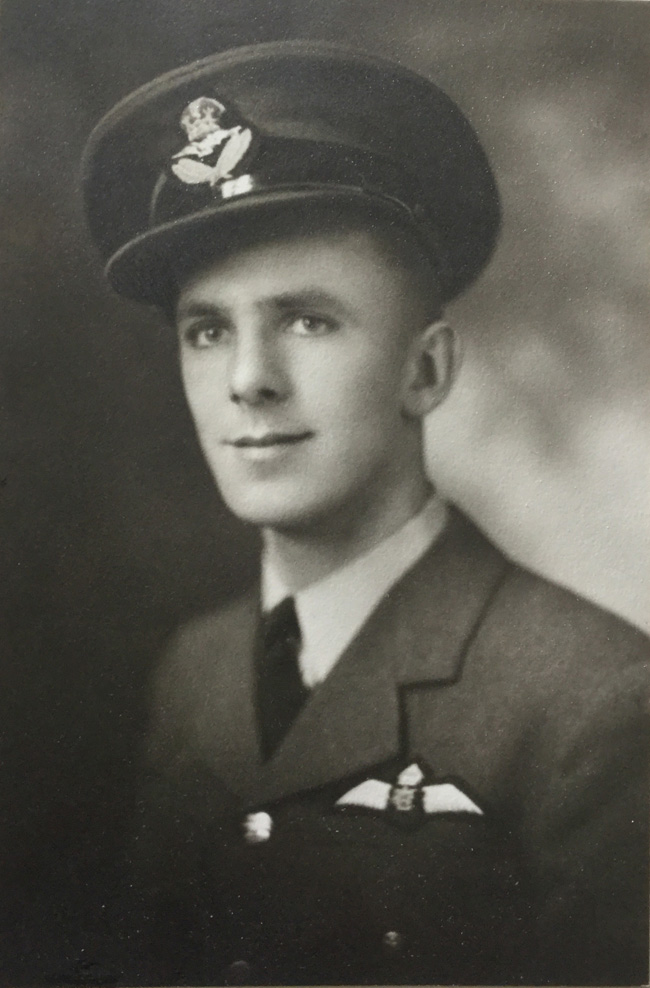 In spite of the rule about not taking photographs on air bases, Jim managed to collect a few. Here’s one of a guy named Johnnie taken at the Regina base. 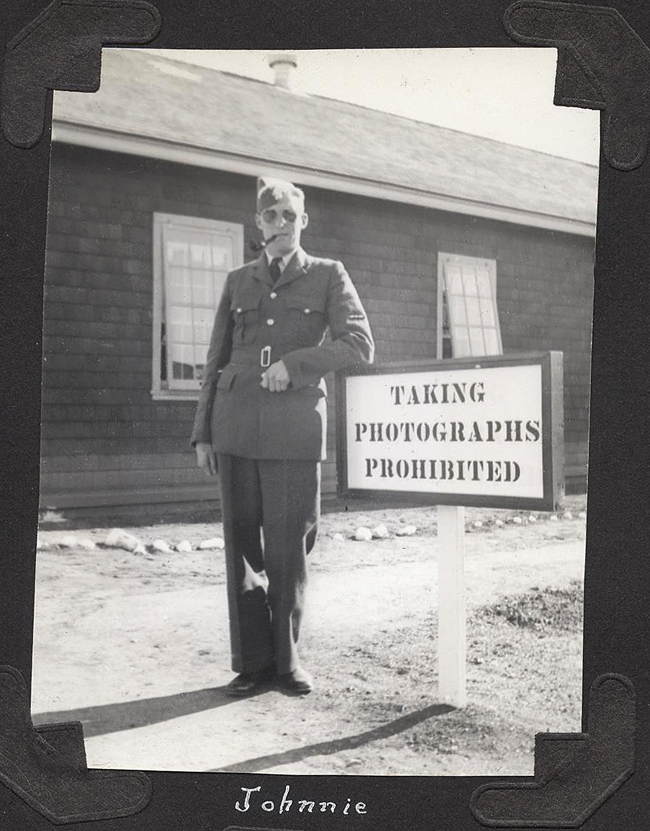 And here’s the control tower at Virden, Manitoba. 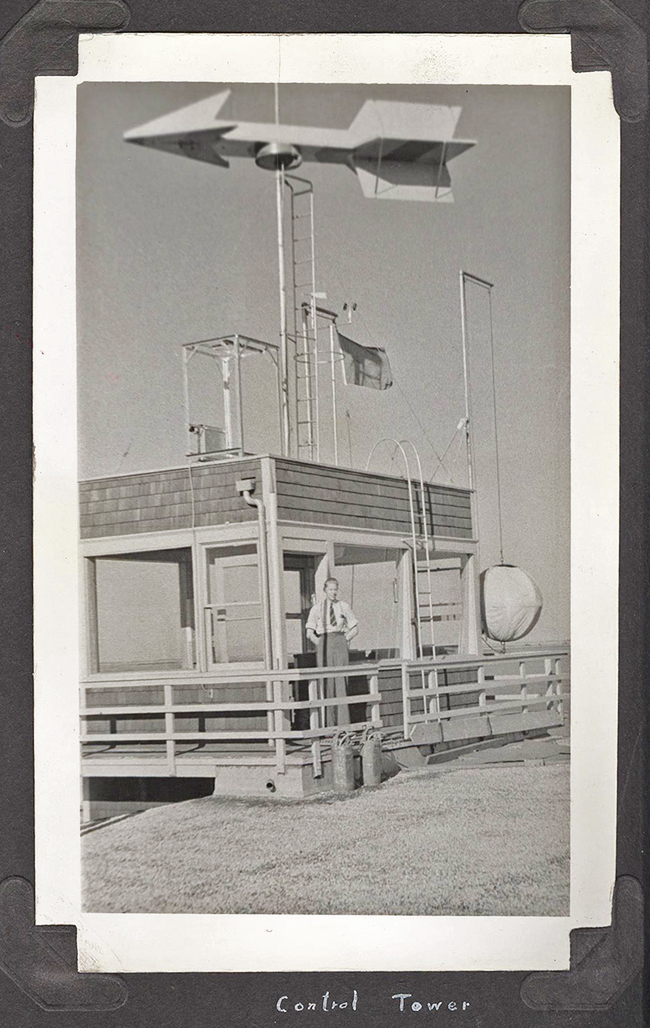 On January 11, 1943, Jim was sent to Claresholm, Alberta, to complete the final stage of training: Service Flight Training School.

Every new group of flyers (called a “flight”) was given a welcome dance in Claresholm, and that’s where he met his future wife Betty. “It was a jitney dance – you had to pay 10 cents to dance with the partner of your choice,” he said. The funds went to cover the costs of the dance.

The budding courtship was cut short when Jim finished his course and went on to an air training base in Rivers, Manitoba on June 10, 1943. There he received his long-awaited orders to head overseas to fight the enemy.

Jim made it all the way to Halifax, and was preparing to board the troop ship, when the Public Address system called him to the administration office.

“The plans have changed,” he was told. “You’re being sent back to Rivers, Manitoba to become a Flight Navigation instructor.”

Baffled and frustrated, the young man got back on the train and returned to Manitoba. “The air force didn’t bother explaining anything,” he said. “You followed orders and did as you were told.”

A couple of months later, he was posted to Calgary in August 1943. There he ran across someone who had been working in Halifax at the time, and he explained to Jim what had happened.

It was another pilot named James Milne who had requested a home posting because his wife was expecting a baby, and the RCAF had confused the two men!

“I never knew what happened to the other guy,” Jim said. “He probably went overseas in my place.”

In spite of his disappointment, there was one advantage to the Calgary posting. Betty was also in that city, taking a business course at Mount Royal College and rooming with her sister Audrey.

Jim Trains Flyers How to Navigate

Jim instructed the men who were in their final stage of training at Service Flight Training Schools. “They knew how to fly,” he explained. “Now they needed to learn how to get around the country, and how to get home again. Essentially, I taught them how to read a map.”

In the classroom, Jim briefed the men on how to recognize rivers, railways, and towns from the air. I asked him if the old story about flying low to check the names on grain elevators was true, and he confirmed it was, indeed! If a pilot got lost, he headed for one of the distinctive grain elevators that dotted the prairies and checked to see which town he was flying over.

(Jim couldn’t remember anyone who got terribly lost, at least not on his watch, but I found an official report of three flyers who set off from the air training base in North Battleford, Saskatchewan and got so confused that they ran out of fuel and were forced to land in a patch of muskeg beside Stoney Lake, where the aircraft overturned and one of them was slightly injured. After waiting one full day for rescue, they set off on foot and eventually hailed a passing boat on the lake, and were taken to the Prince Albert game warden. During their ordeal they had nothing to eat, in spite of trying to shoot a rabbit with their service revolvers!)

In Canada, finding their way around was still relatively easy. “Of course, it was a different situation when they got to England,” Jim said. “Over there the landscape was a real hodgepodge.”

Contributing to their difficulty overseas, a full blackout was in effect so the men couldn’t navigate by spotting the lights of the towns below.  Therefore, learning how to fly using instruments was of vital importance.

Over the next few years, Jim continued to request an overseas posting but was told his skills as a navigation instructor were more valuable at home.

Ten months later, in May 1944, Jim was sent to the air training base at North Battleford, Saskatchewan. He and Betty were engaged by then, and they wed in her home town of Claresholm on August 1, 1944. Betty came from a family of eight siblings, so Jim joined a large extended family.

“It was a scorcher,” Betty recalled. “Jim had coloured confetti all down his back inside his white shirt, and when he undressed that night the sweat had caused coloured polka dots all over his skin!” 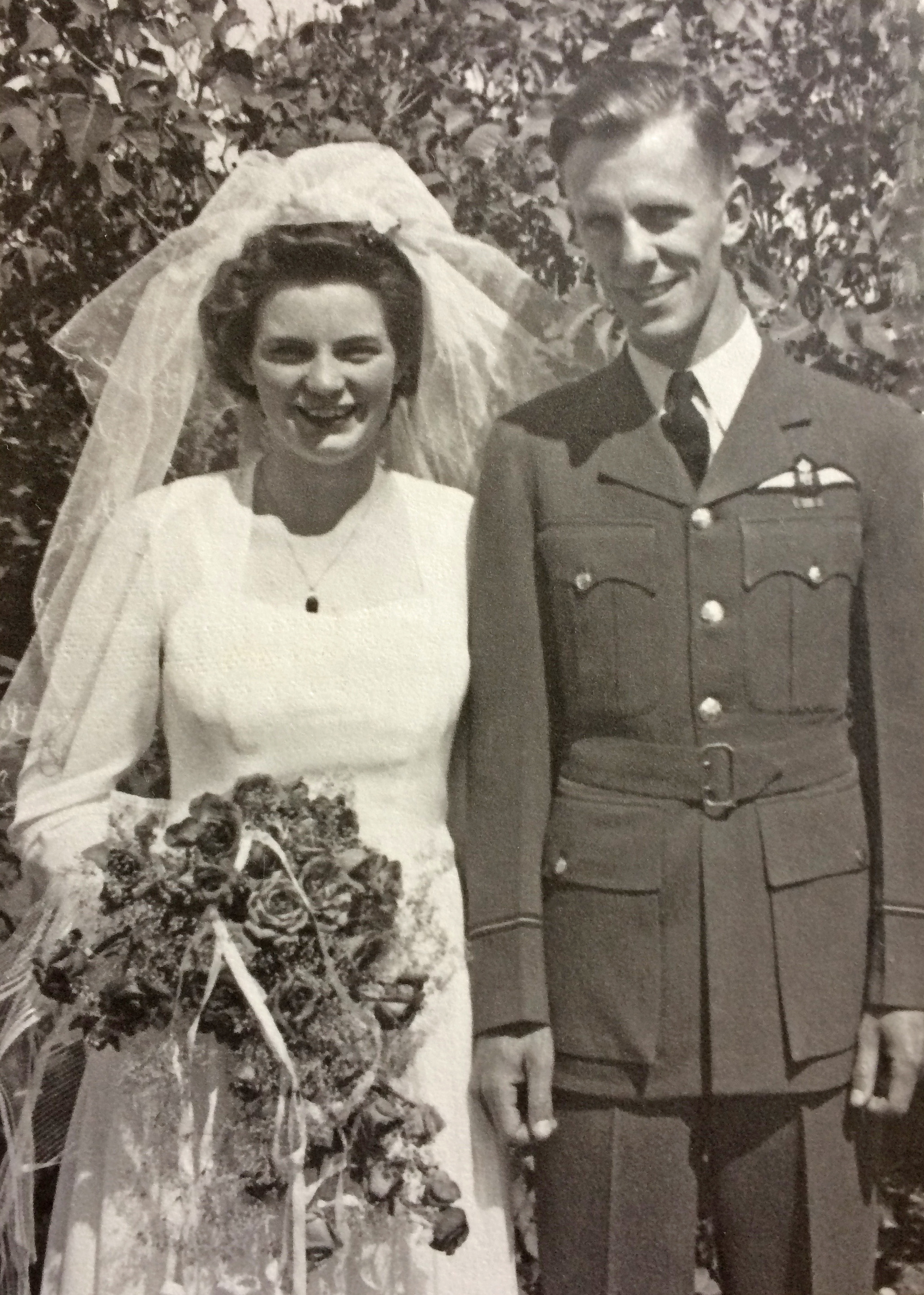 The happy couple spent a few days at Jim’s family cabin at Clear Lake, Manitoba, before taking up their new home in North Battleford.

Married quarters were not provided, so the couple had to find their own accommodation. They boarded with a family in town, and for the first time in their lives, they were bitten by bedbugs! However, they persevered.

Coincidentally, my mother June Light was in high school in the adjoining town of Battleford during this period. Although she didn’t know the Milnes then, they have shared many reminiscences about the air training base.

An even greater coincidence is that Jim Milne is familiar with my childhood home, because I grew up on a former relief airport at Brada, attached to the North Battleford base. After the war, my parents purchased the former airport and turned it into a farm. Read my story here: Growing Up With Air Force Ghosts.

While in North Battleford, Jim collected a few interesting photos, including this one of a Cornell aircraft. 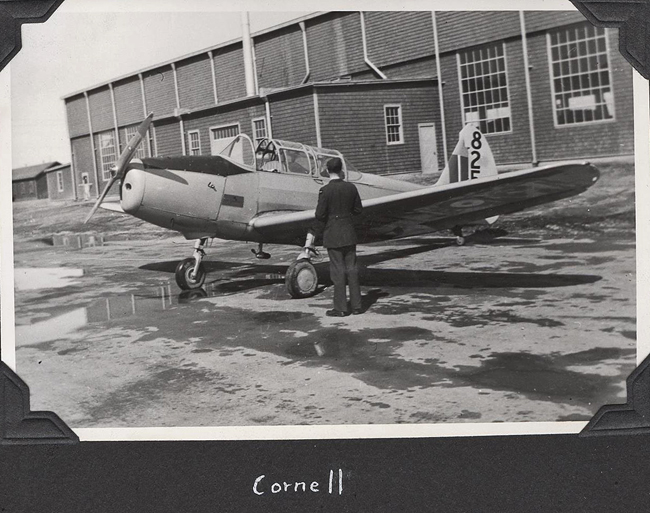 Here’s a rare photo taken inside an Avro Anson aircraft — the trainees knew that mastering their skills would mean the difference between life and death overseas. 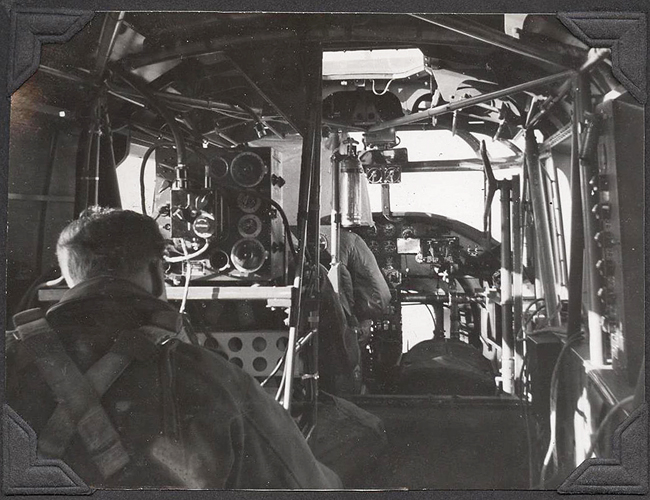 And here’s Jim on horseback! “A neighbouring farmer at North Battleford rented out his horse for photographs so everybody could send one home to his family and show them he was living in the Wild West,” Jim laughed. “That farmer must have made a fortune!” 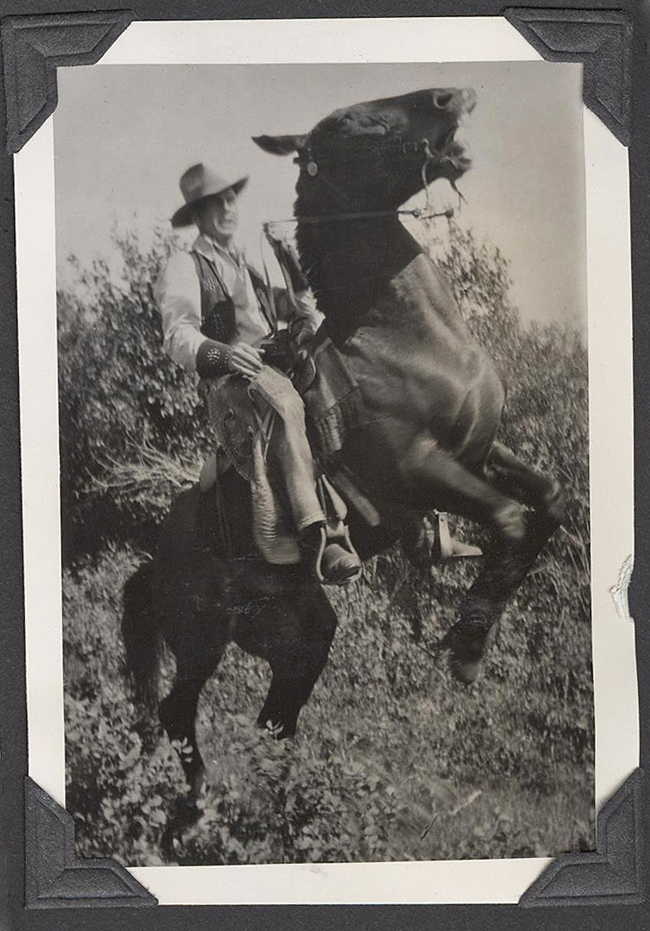 Here Jim is seated in a local barber shop in North Battleford, Saskatchewan. 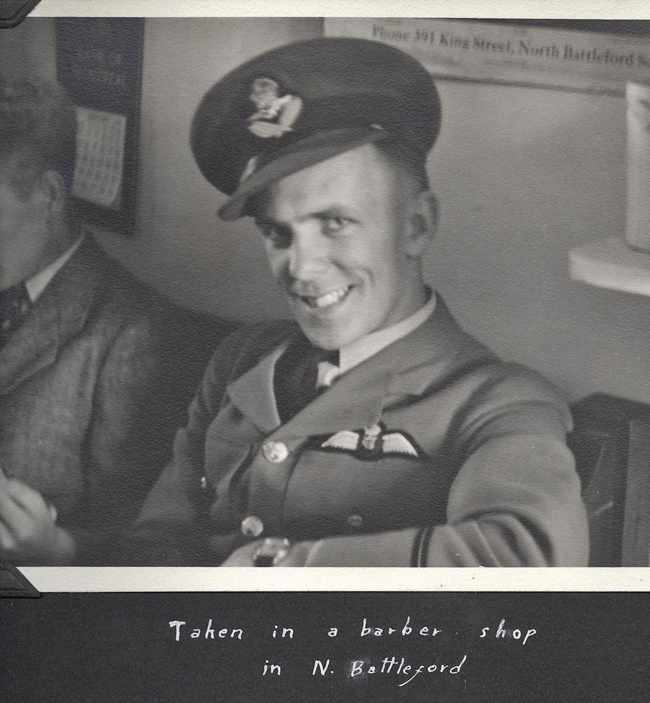 Inside the hangar, the training aircraft stand ready. 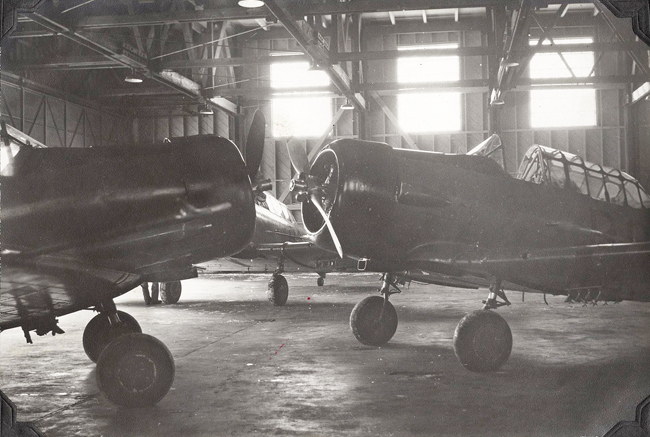 Of course, with so many young and inexperienced flyers, accidents were inevitable. 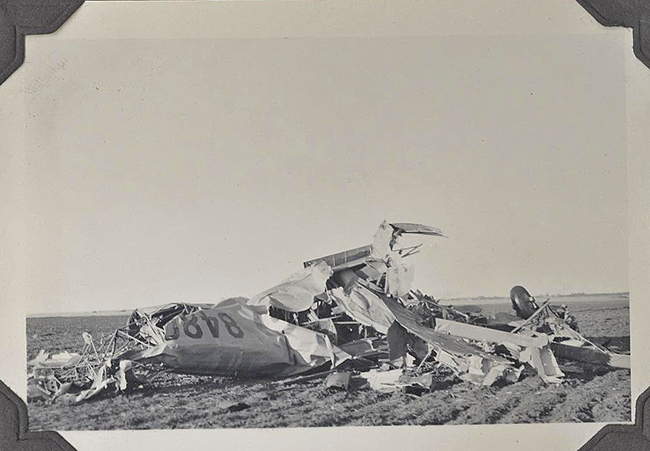 Betty stayed in North Battleford when Jim was sent back to Rivers for a month, and then to Portage La Prairie for two months.

In June 1945, the war in Europe ended. However, there was no indication if and when Japan would surrender, so the air training plan was still opening new air bases.

Jim was dispatched to the new base in Souris, Manitoba, and Betty went with him. The couple lived in one room until that happy day when Japan surrendered in August 1945 and World War Two came to its final conclusion.

One of the most unusual wartime souvenirs I have seen is Jim’s lengthy logbook, in which he records almost 2,000 hours of flying time. It is adorned with the most intricate sketches, although Jim hastened to tell me they weren’t all original. “Every station used to put out a little magazine, so I copied some of them,” he explained.

Nevertheless, they seem to indicate a certain amount of artistic talent, not to mention a sense of humour. Here is a photo of Jim holding his battered logbook. The illustrations provide a glimpse of life inside an air training base. 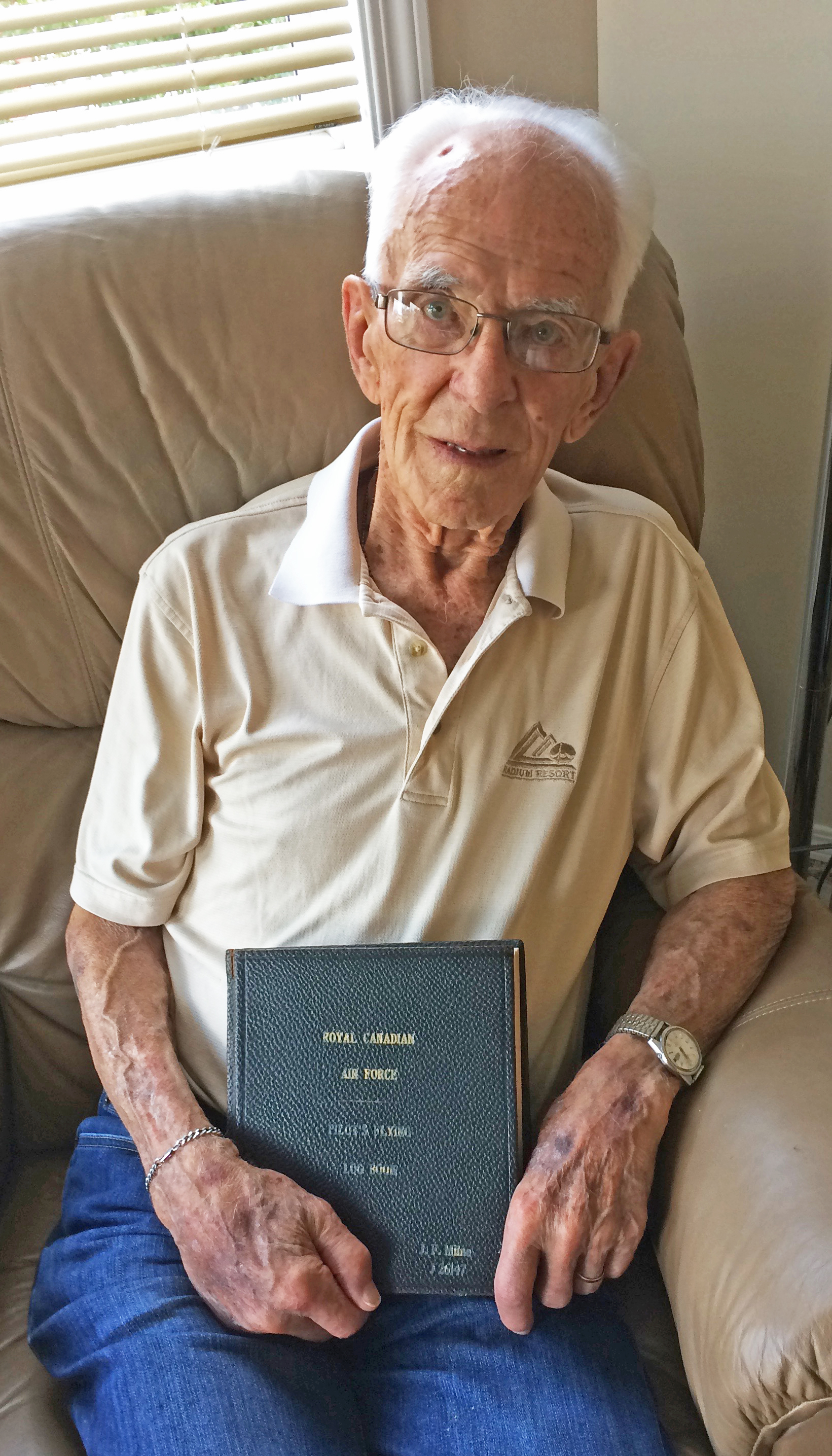 The first sketch from November 1942 at Virden, Manitoba appears to show a young flyer wrestling with his aircraft. 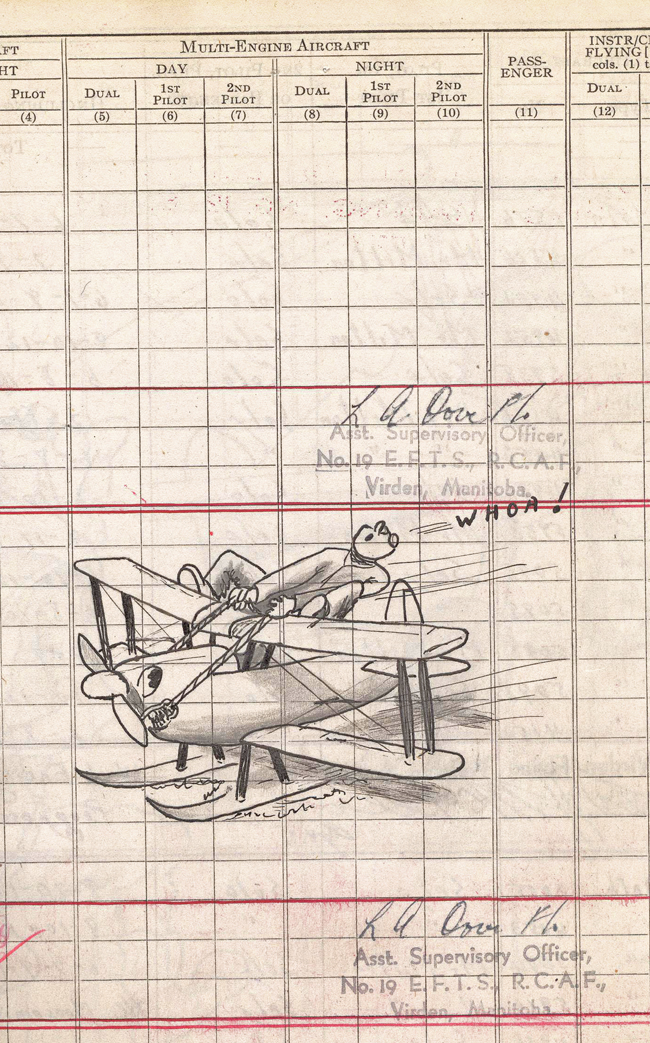 Virden, Manitoba, December 1942: By the following month, the flyer had acquired a lot more confidence! 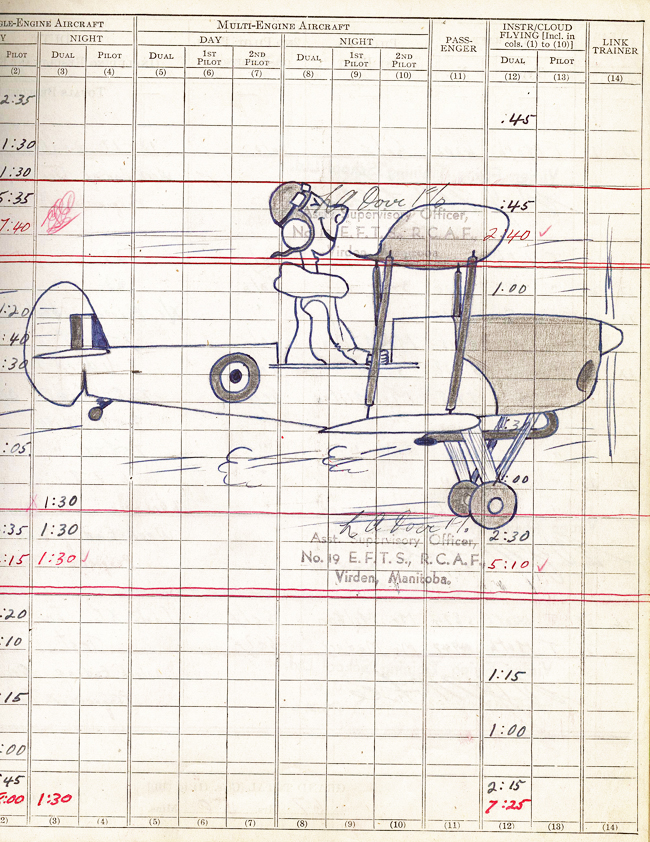 Rivers, Manitoba, June 1943: Jim learned that his fate was to remain in Canada. This sketch tells the tale. 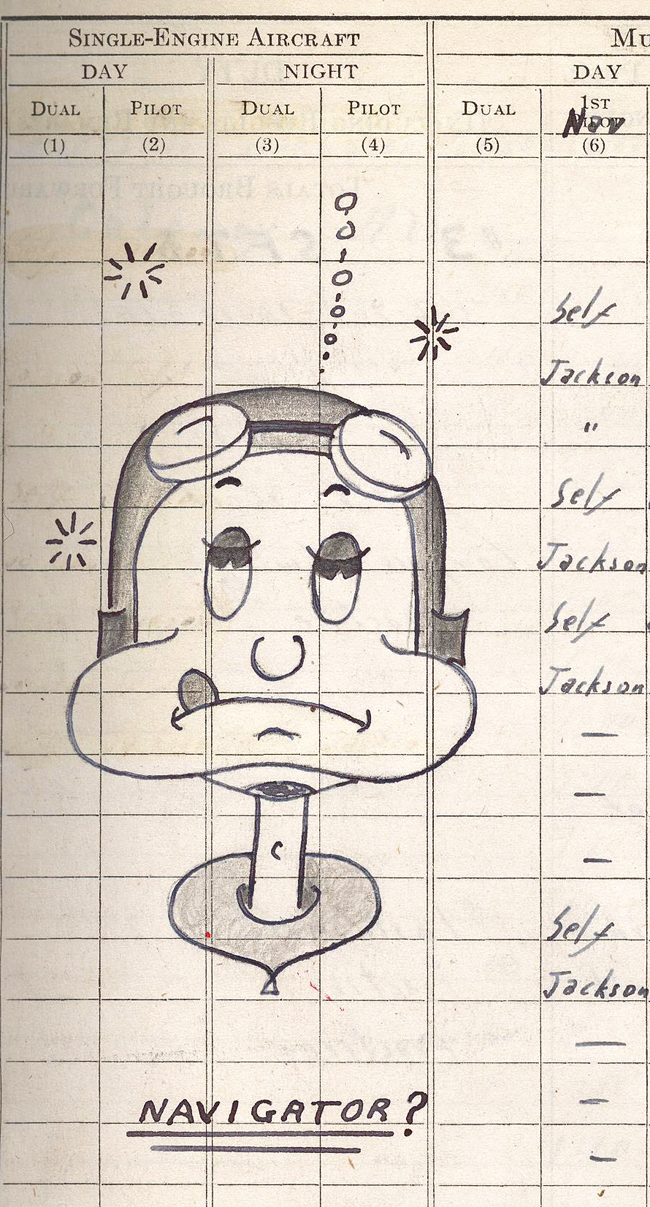 North Battleford, Saskatchewan, May 1944: Rain was never welcome to the boys in blue. 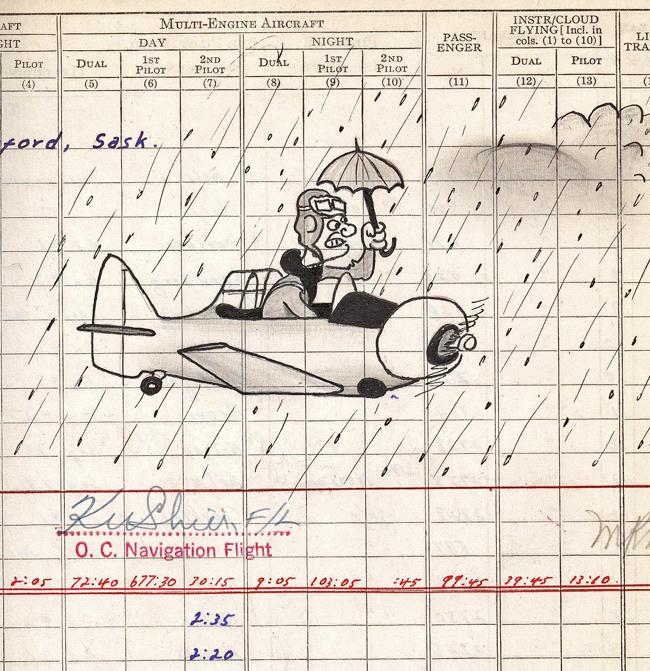 North Battleford, Saskatchewan, August 1944: Jim sketched the intercom system, used by the men in an aircraft to communicate with each other. 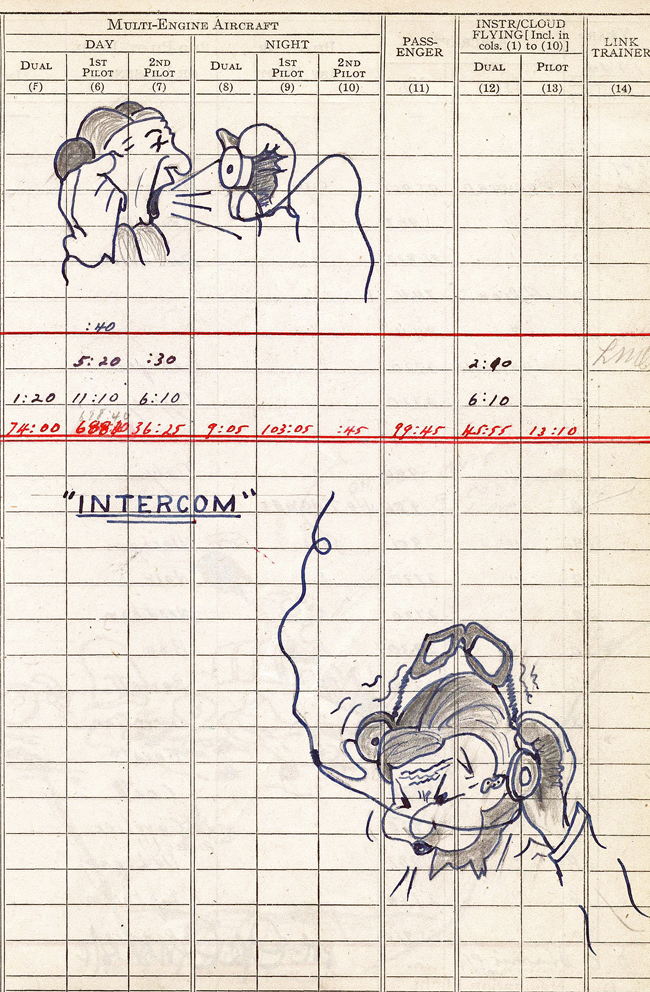 North Battleford, Saskatchewan, November 1944: Low flying was strictly forbidden to the trainees, and yet it proved almost irresistible. Here a flyer approaches a set of power lines. 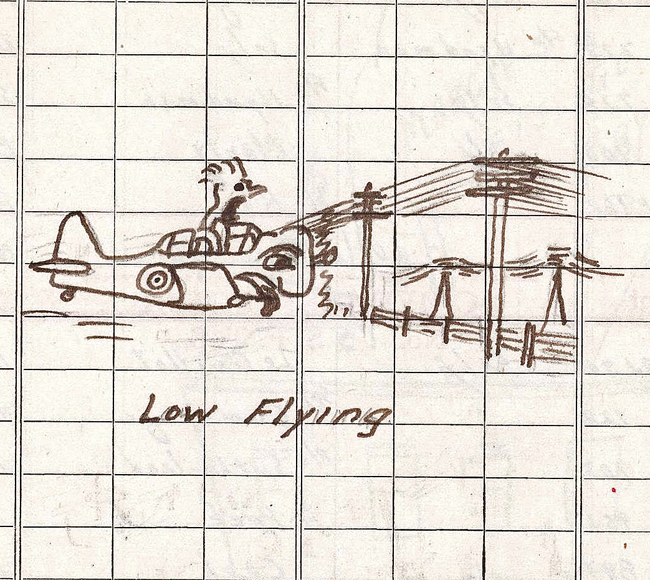 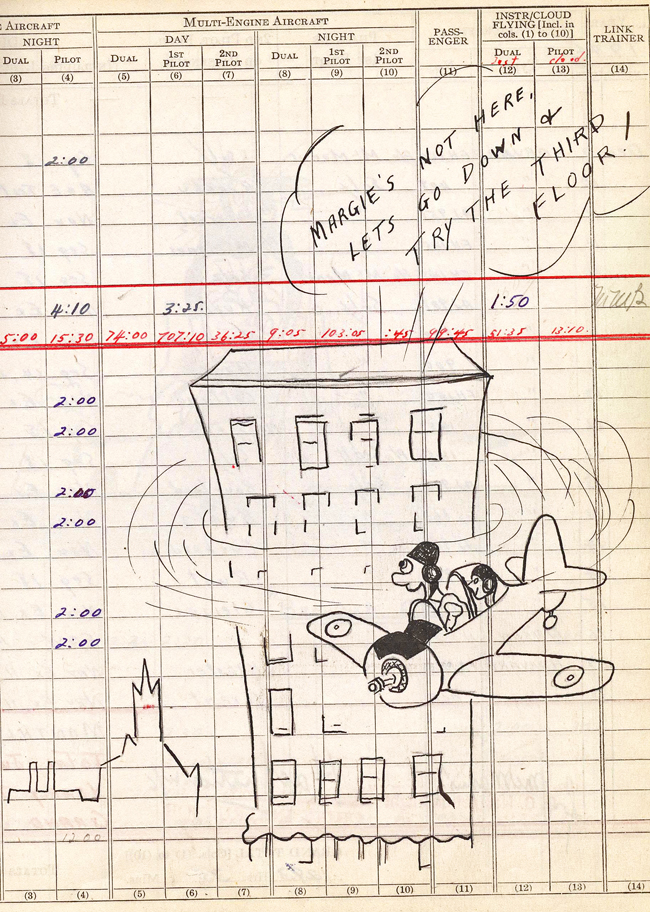 North Battleford, Saskatchewan, December 1944: It’s unclear why the pilot was angry, or “browned off,” but the guy behind him is clearly hoping to survive the flight. 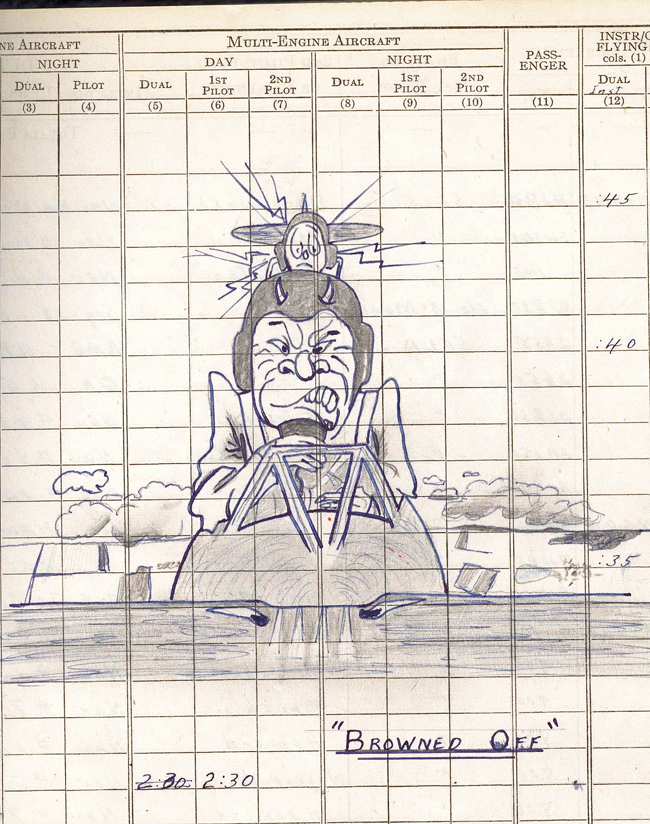 North Battleford, Saskatchewan, January 1945: Whatever else was going on in Jim’s life, he was proficient at flying an Anson! 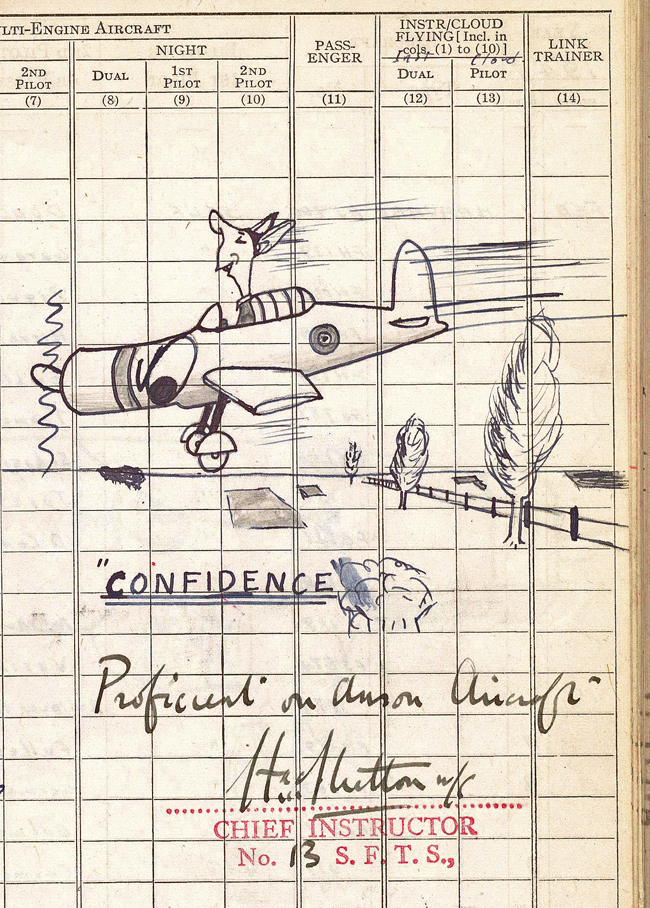 Souris, Manitoba, June 1945: Probably Jim doesn’t look happy here because he had to leave Betty behind in North Battleford, Saskatchewan, when he took up his new posting. 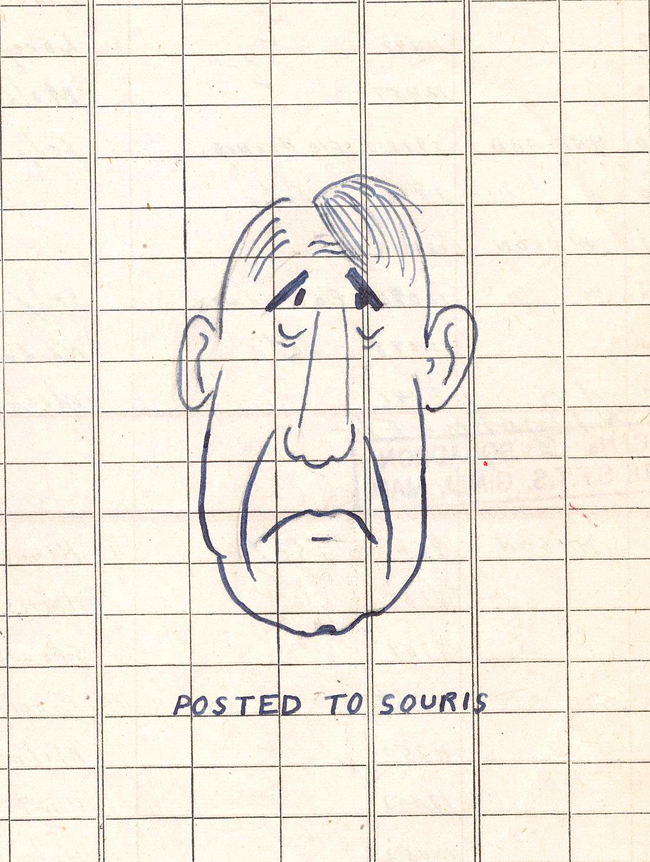 Souris, Manitoba, August 1945: Happily, the war ended not long afterward when Japan surrendered! This is the last sketch to be found in Jim’s precious logbook. 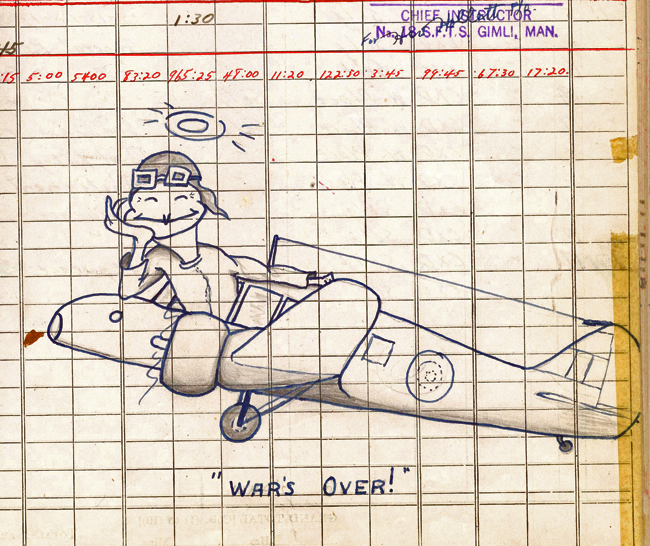 Jim remained in the RCAF reserve for several years after being discharged on October 12, 1945. With financial aid from the federal government (returning Canadian veterans were given assistance to buy land, establish a business, or pursue an education) Jim returned to complete his geology degree at the University of Manitoba. “That’s when life got interesting!” he said.

He may not have gotten overseas during the war, but he pursued a career with Gulf Oil, working in Iran, Nigeria, Cameroon, Kuwait, and Norway.

When their youngest child Dave started university and left home, Jim accepted a position with Gulf Oil at the company’s headquarters in London, England, and Betty happily accompanied him. They lived in London for the next two years, and then returned to London for another stint before Jim finally retired.

Having owned a cabin at Lake Windermere since 1952, they soon sold their house in Calgary and moved here to Invermere full-time in 1985. This month Jim and Betty Milne celebrated their seventy-third wedding anniversary!

James Milne, thank you for serving our country so willingly in its hour of need. It wasn’t only the men in combat who won the war, but hundreds of thousands of Canadian men and women who provided essential support services here at home.