Ruth Owen Whitelegg of Brantford, Ontario, trained as a photographer for the Royal Canadian Air Force and served at RCAF Centralia, Ontario, during World War Two. Her photo album gives us a fascinating glimpse into wartime history, crammed with snapshots of life on a Canadian air training base. 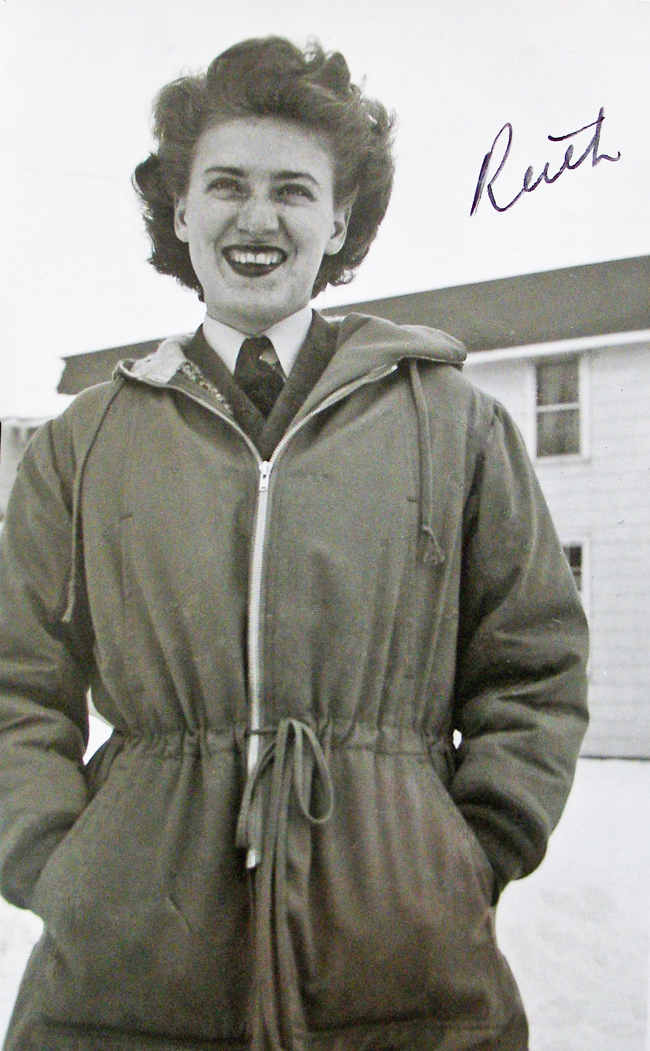 Ruth was born on March 12, 1925 to parents Stanley Owen, an electrician at the Brantford Telephone Company, and Evelynn Owen, a telephone operator.

She was one of seven children including brothers Clyde, Filo, Frank and Evan; and sisters Grace and Marjory. Clyde also served in the RCAF, and Filo was in the Canadian Army.

Ruth joined up on April 16, 1943, one month after her eighteenth birthday. She did her basic training at Rockcliffe, Ontario. The petite brunette then trained as a photographer before being posted to one of the largest air training bases in Canada at Centralia, Ontario.

After the war, Ruth moved to Vancouver and was working in a bank when she met her future husband, Kenneth James Whitelegg. Ken was an avid rugby and football player, and even tried out for the B.C. Lions in 1954. (Unfortunately he developed pneumonia and didn’t make the team.)

Ken and Ruth were married in Vancouver on June 21, 1951. After their oldest son Brent was born, she stayed home and had two more sons, Shawn and Kenneth Junior.

When Ken found work on the Alaska Highway, the young family moved to Prince George in 1956, and back to Vancouver in 1958. They continued to move for Ken’s work, first to Whitby, Ontario, and then to Calgary. In 1980 Ken and Ruth retired and moved to beautiful Peachland, B.C. where they remained until their deaths. Ken served as municipal councillor for several years.

I spoke to their youngest son Ken recently about his memories of Ruth Owen Whitelegg. Typical of most women who joined the armed forces in World War Two, Ruth led a full and active life.

“Once she got her driver’s licence there was no stopping her,” Ken recalled. “When we lived in Whitby she volunteered at the local hospital and for the curling club. She arranged bonspiels for both men and women. She took us boys to guitar lessons, hockey, lacrosse and often to the hospital to get stitches for all our injuries!

“She started golfing around 1960 and golfed for many years. Bowling was her natural sport, and she set records at the Peachland Bowling Alley.”

On the home front, Ken said his mother “was always doing or collecting something.” She loved people, dogs and cats, snakes and fish. She collected stamps, played cards, loved visiting flea markets and auction sales, and took plenty of pictures. She never stopped practicing the photography skills she learned in the air force.

Ruth’s oldest son Brent Owen Whitelegg passed away in 2001. Her second son Shawn Robert Whitelegg lives in Greenwood, B.C.; and her youngest Kenneth Lee Whitelegg lives in Calgary. He is married to Laurie Gay Mackenzie and they have three children: Stuart (married to Traci Webster, with one daughter Brooklynn), Joseph, and Kayla.

Ruth died in 2007, and her husband Ken died in 2014. While sorting out their possessions, the family discovered a photo album from Ruth’s air force days and gave it to the Peachland Historical Society. The society decided that the album belonged at a museum specializing in wartime history, so they donated it to the Bomber Command Museum in Nanton, Alberta.

The following photos and text were taken from her album by fellow writer Anne Gafiuk of Calgary.

Leading Aircraftwoman Ruth Eva Owen, Service Number W312752, was a photographer with the Photographic Unit in the Royal Canadian Air Force at No. 9 Service Flying Training School, located at Centralia, Ontario, one of the largest British Commonwealth Air Training Plan stations in Canada.

Paging through her photo album, I saw that she made notations on some of the photographs, but not all. Unfortunately many subjects are unidentified, and on others she noted only their first names.

Ruth trained at No. 1 Photo Centre in Rockcliffe, Ontario, near Ottawa. This is where all the RCAF recruits did their basic training, and the photographers then remained for their technical training. 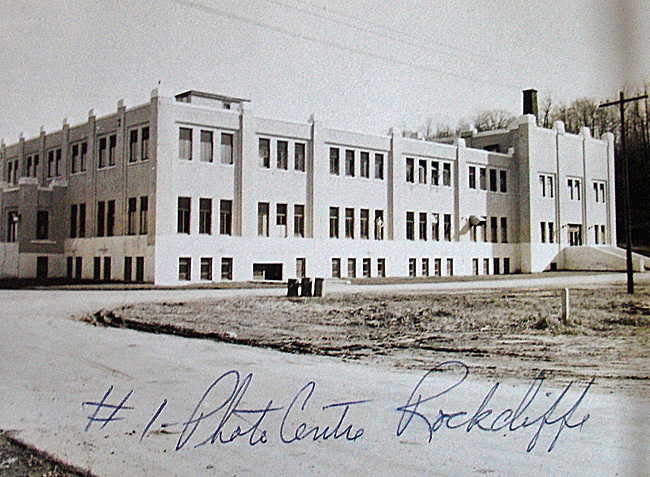 This photo shows what the classroom for photographers looked like, with simple wooden tables and benches. 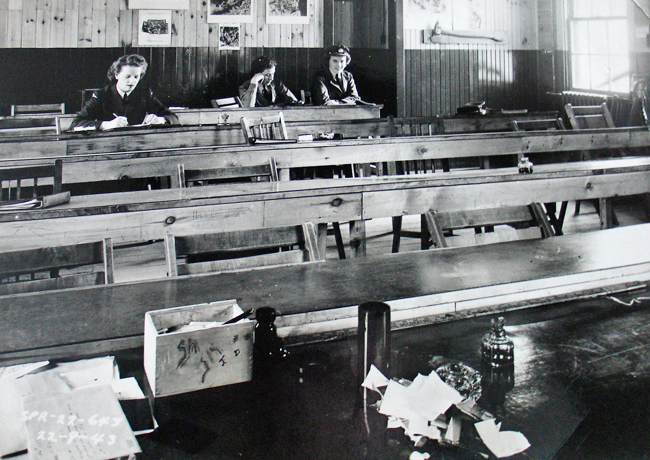 Ruth graduated with Class 28. She is seated in the photograph below in the front row, fifth from the left. 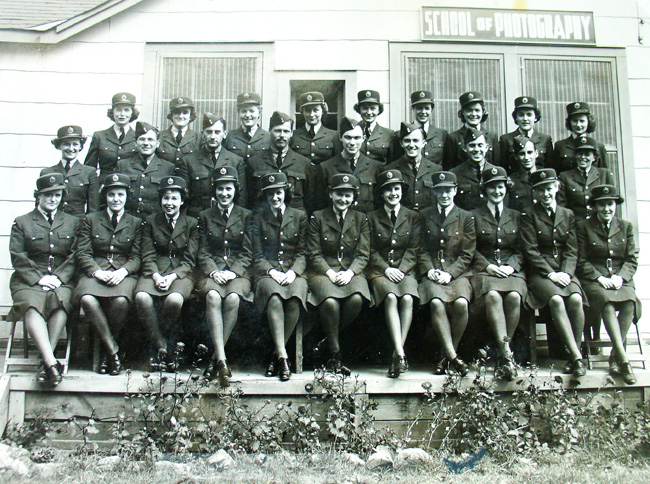 Amazingly, Elinor Florence interviewed one of the other women in this class before she died! Lou Pound Marr is seated just two places away from Ruth, in the front row, third from left. After graduating Lou was posted to Dauphin, Manitoba, and you can read her story here: Lou Marr: RCAF Camerawoman.

And here’s another coincidence. While at Rockcliffe, Ruth became friends with Yvonne Valleau (now Wildman) and the two girls spent time together. Yvonne is still living in Kindersley, Saskatchewan, and she remembers Ruth well – although she had no idea that photos of herself existed in Ruth’s album!

After graduation, Yvonne was posted to Vulcan, Alberta, and you can read her story here: RCAF Photographer Yvonne Valleau. 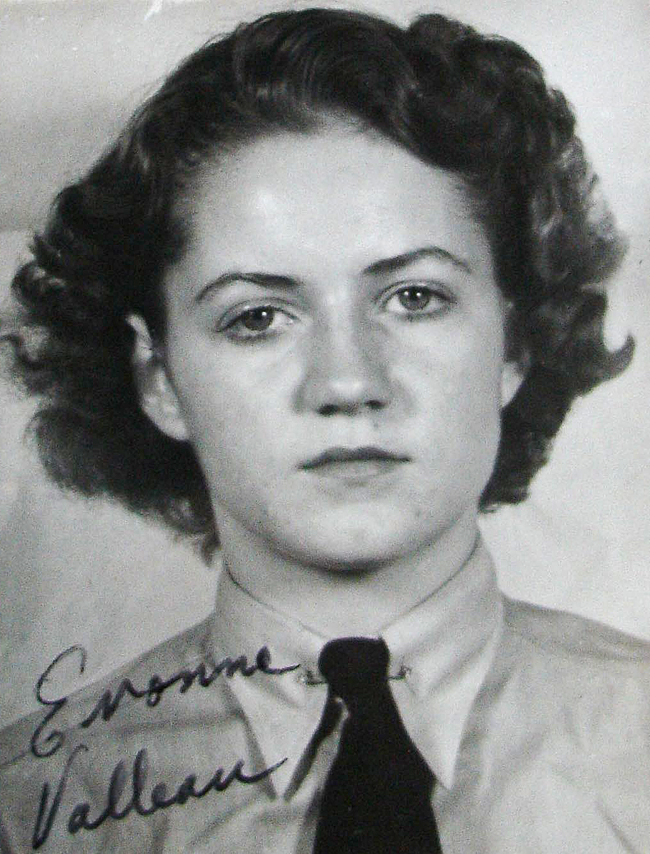 Here’s another photo from Ruth’s album showing Yvonne getting off the base bus at Rockcliffe. (Yvonne’s name is spelled incorrectly on the photo). 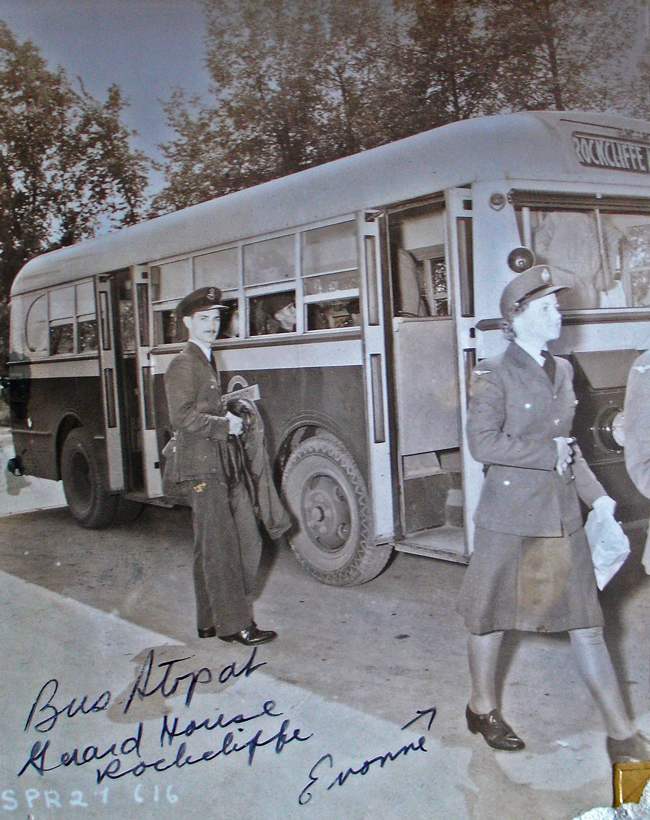 After finishing the course, the trained photographers were posted to various bases across Canada. Ruth was sent to No. 9 Elementary Flight Training School in Centralia, Ontario in November 1943. She joined the Photo Section there, consisting of nine women and three men. 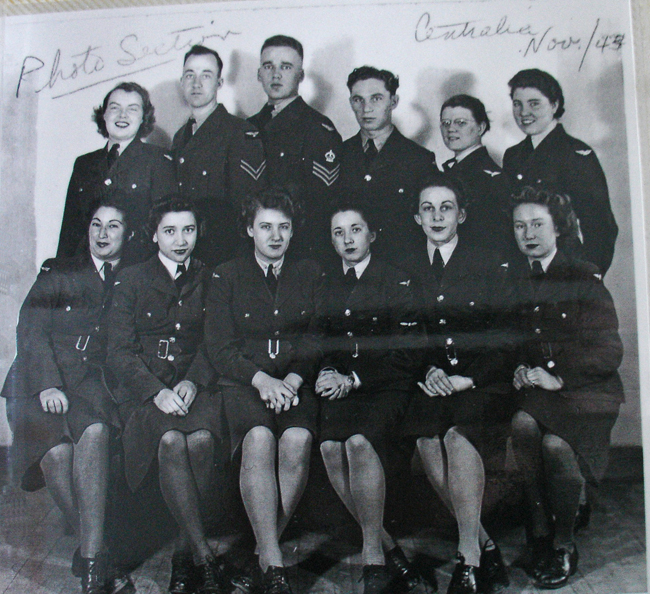 This photo identifies Chic Locke as her assistant in the darkroom, but that may be a joke. Since he is wearing a white flash in his cap, he was probably air crew. 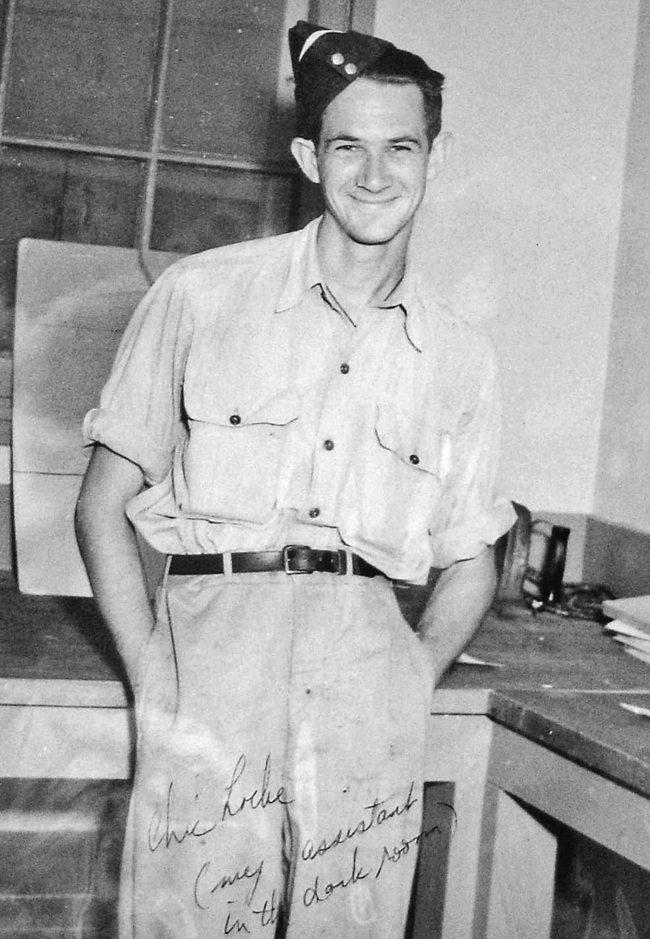 Ruth’s album contains dozens of pictures of individual men and women, plus graduating classes of aircrew, and shots of official ceremonies and parades held on the base. This one labelled “C.O.’s Parade” shows the impressive size of the training base, with dozens of aircraft and hundreds of men marching in the background. 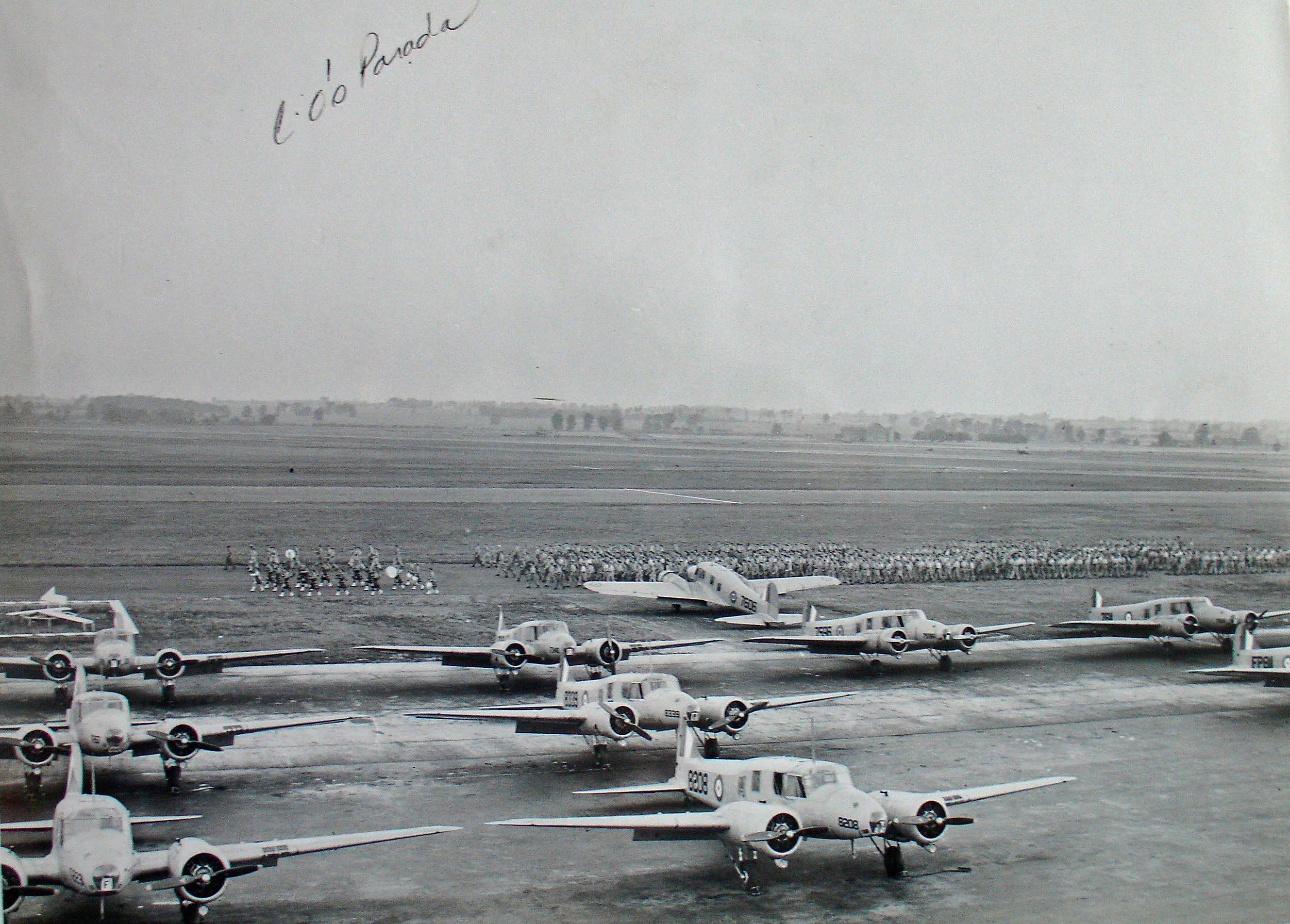 And the album contains this shot of “Fergie,” short for Ferguson, a member of the pipe and drum band leading the parade. 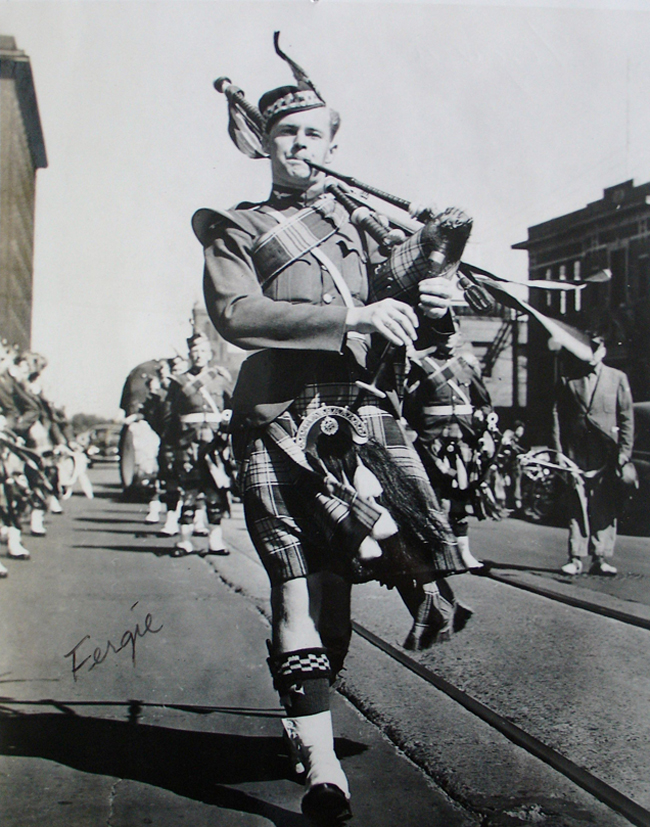 There was plenty of camaraderie on the base among the men and women who were either serving there together, or passing through on their way overseas. Among Ruth’s friends was Cliff Pring of Young, Saskatchewan. 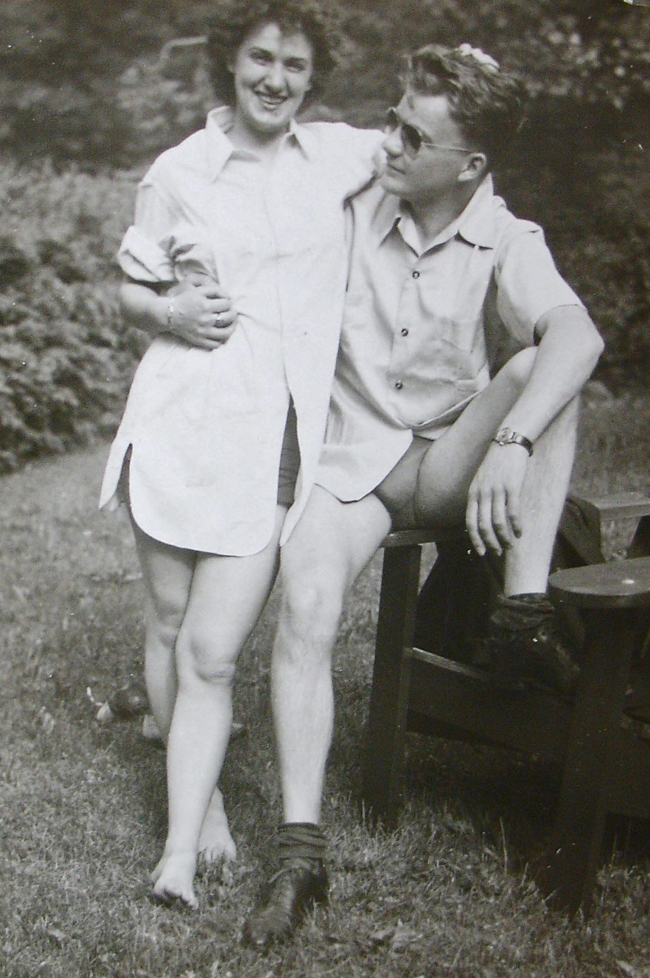 Sadly, Ruth’s album reveals that Cliff Pring, just twenty years old, crashed his aircraft on July 27, 1944. Both he and his co-pilot Tommy Mulcair of Outremont, Quebec, were killed.

In her album, Ruth kept a copy of the Daily Flying Log describing the accident, along with a photograph. “F/O Clifford R. Pring, of Young, Saskatchewan and F/O Thomas C. Mulcair of Outremont, Quebec, crashed Anson 7506. In the approach to landing, the Anson stalled. Port wing dropped and hit the runway. The aircraft rolled over on its back.” 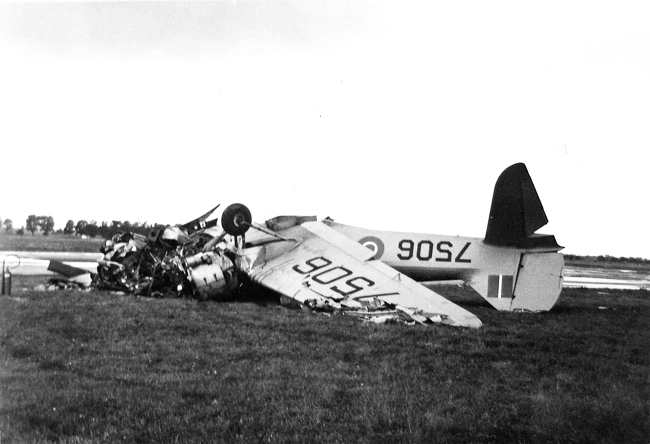 There were happier times as well. Ruth had many girlfriends on the base. Like all teenaged girls with ready access to cameras, they enjoyed taking photographs of each other!

Some of the pictures were straightforward, others artistic in style, with a dreamy Hollywood starlet quality about them. Here are just a few of the dozens of photos in the album. The first one is labelled “Beth Robins.” 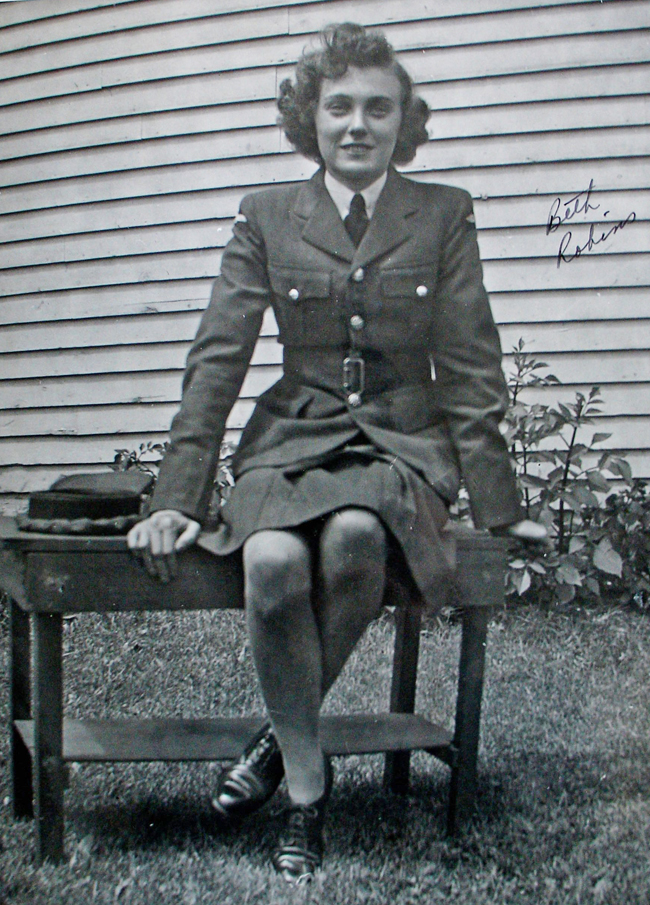 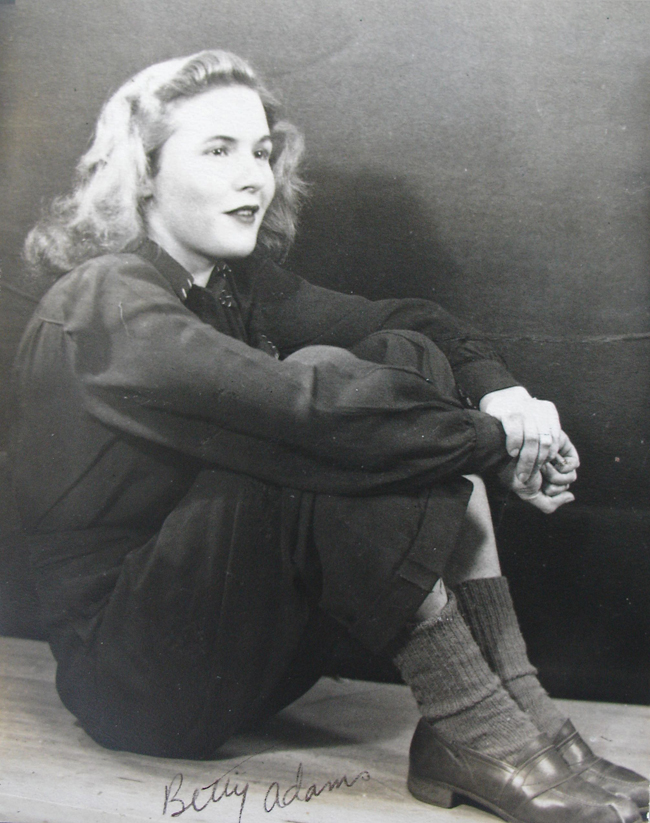 Joyce Simpson and Lynn McLeod. For the most part the women wore skirts with their uniforms, even in the dead of winter. 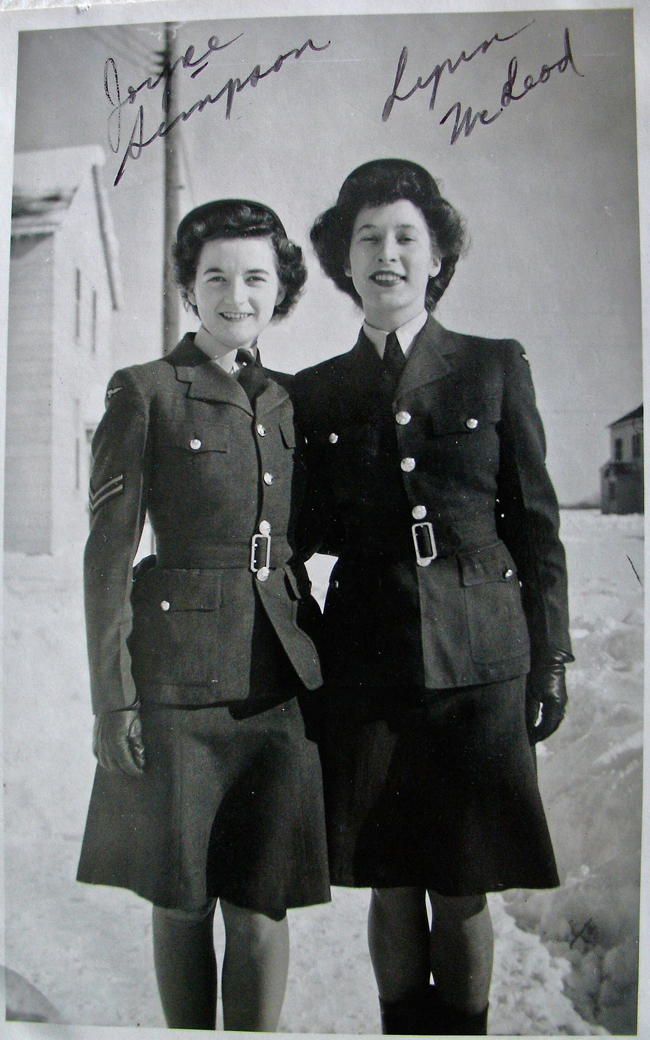 This is a wonderful photograph of Lil Cairns, holding the heavy aerial camera that the women learned how to install in the aircraft. 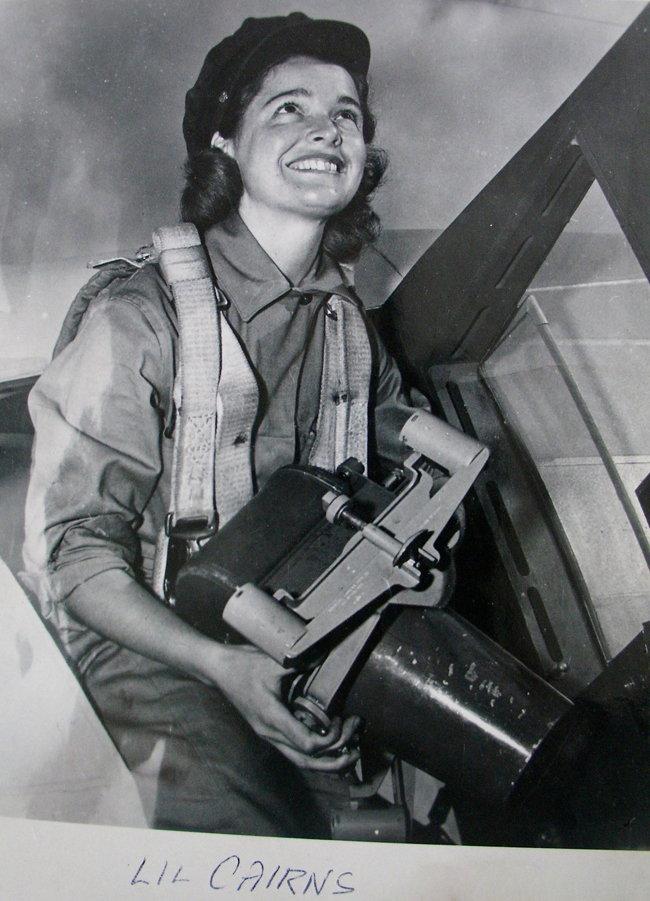 There are several photographs in the album of this women, labelled only by her first name, Mae. Here she is wearing coveralls. 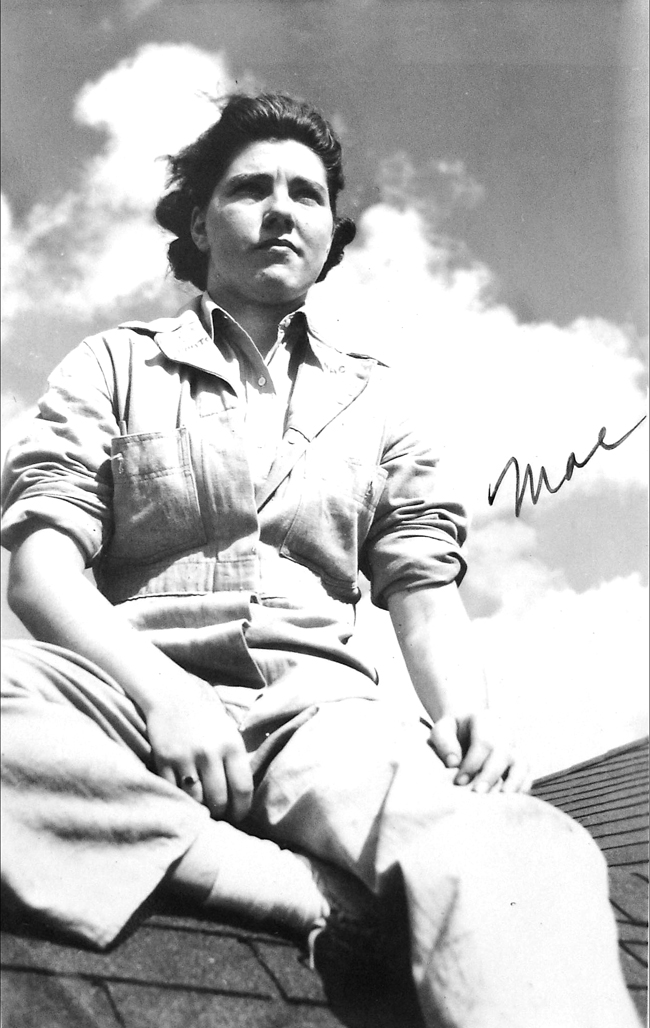 Presumably Shirley Van Nuys is laughing because she is sitting in a snowbank! 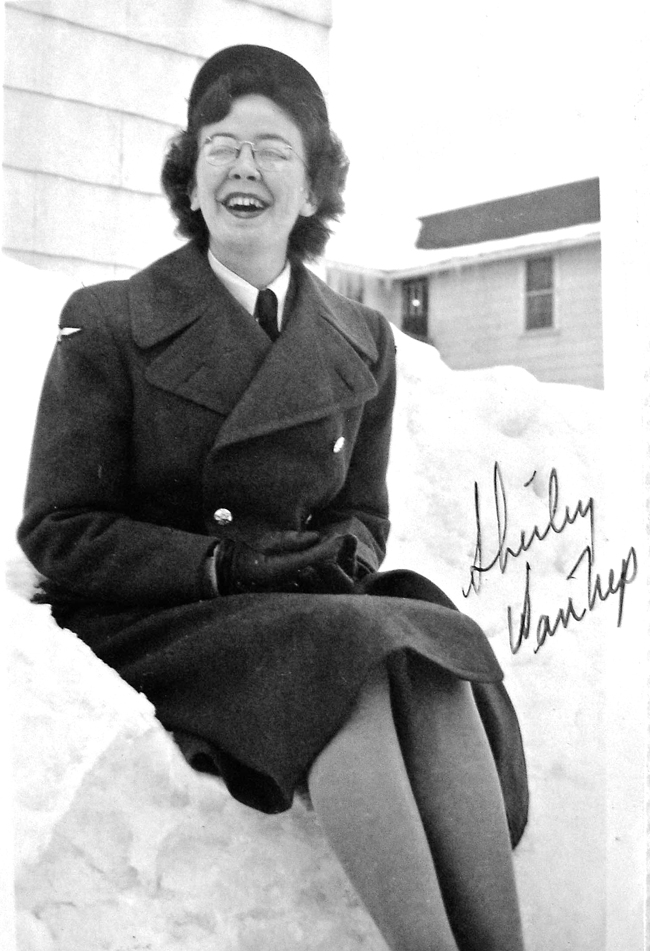 A beautiful photo of a beautiful young woman, Susy Moore. 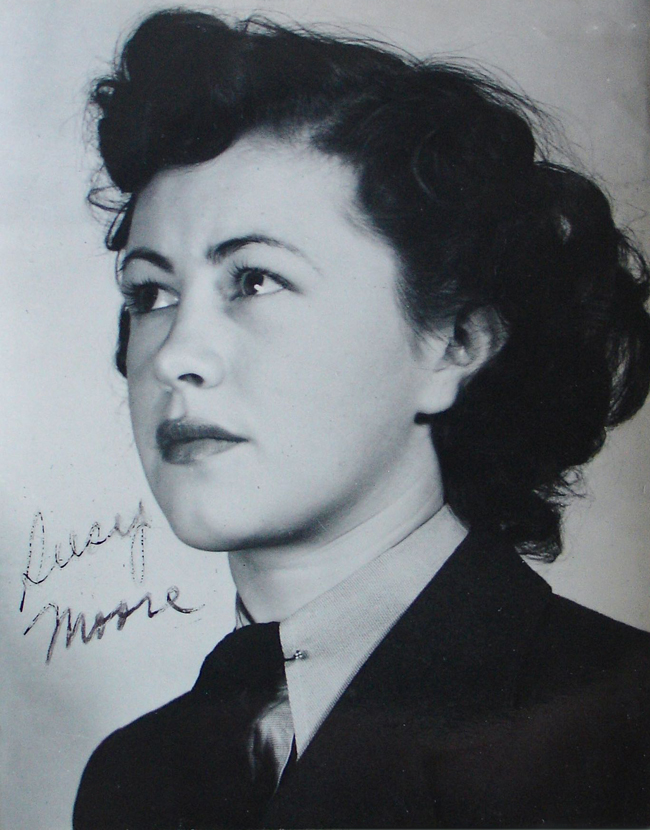 Monica Whalen looks very smart in this photo. She is wearing the later version of the RCAF women’s cap, while Mary Ball in the photo below her is wearing the earlier version, modelled after the British Women’s Auxiliary Air Force. To read more about women’s uniforms, click here: Hats, Helmets, and Headgear.

This is Mary Ball, later Mary Lamb. When the album still belonged to the Peachland Historical Society, her niece Valerie Hawick of Peachland was astonished to find this photograph of her aunt! 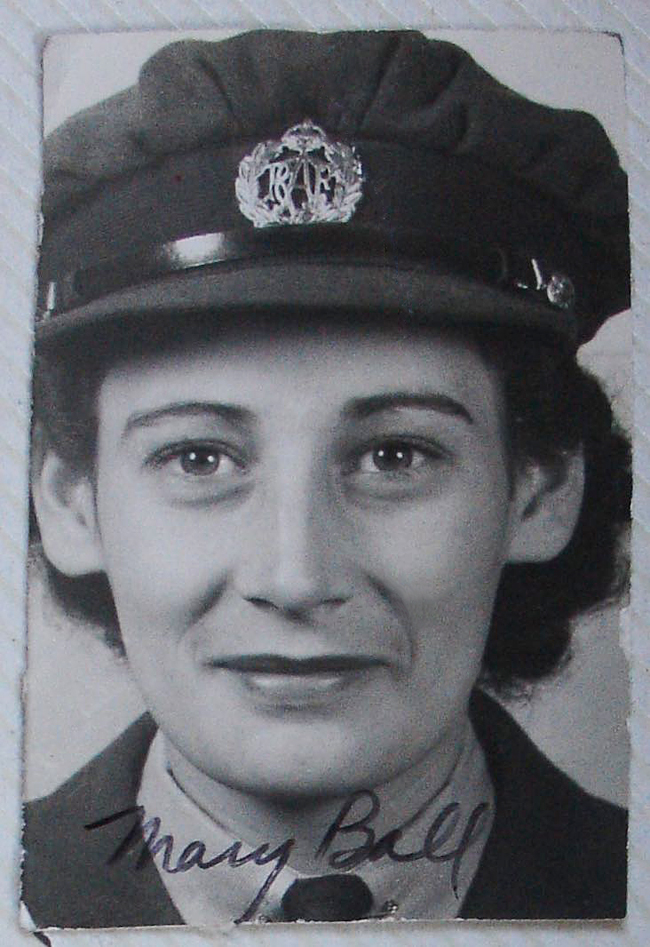 One of Ruth’s good friends was Norah, last name unknown, who accompanied Ruth to New York for three days at New Year’s 1944, when they stayed at The Barbizon Hotel. Here’s Norah standing on the wing of an aircraft. 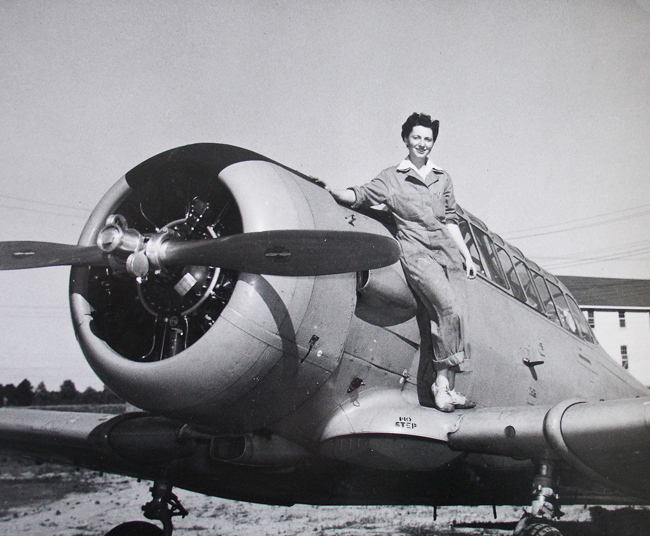 There were lots of photos of men and women mingling during working hours. 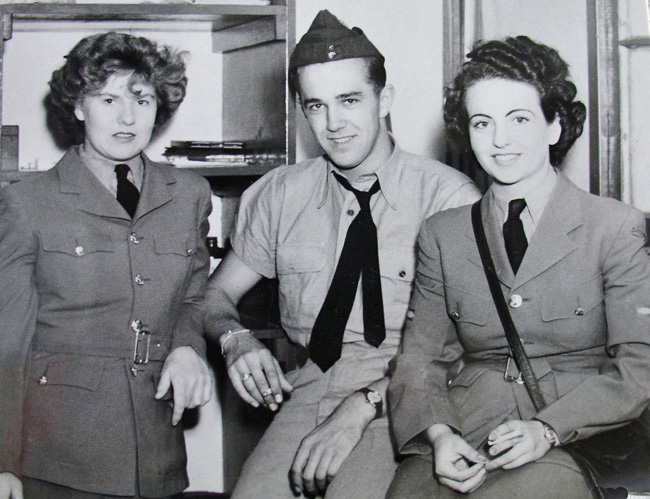 And there were plenty of parties in the women’s quarters! 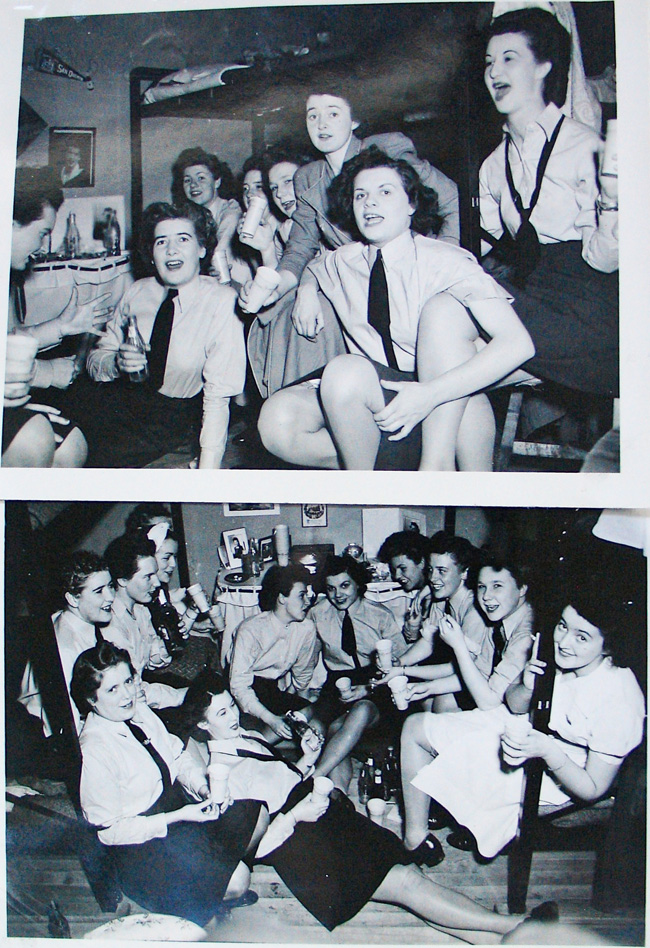 There was even a wedding, although we know only that the bride was named Jean. Judging from the paned window in the background, the happy event took place on the base. 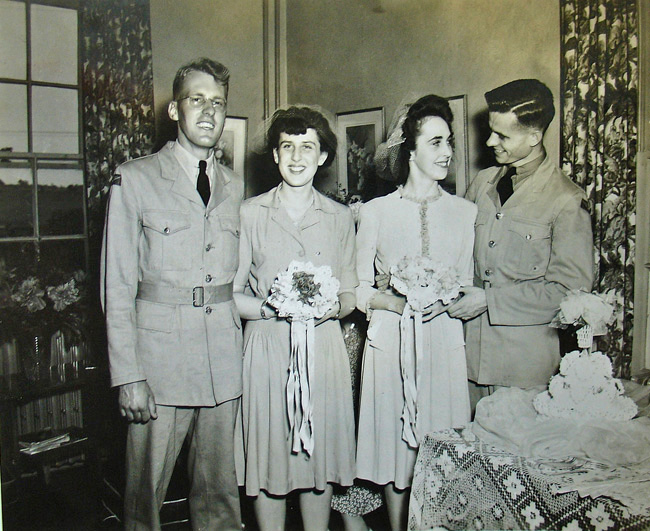 This final photograph of WDs on parade was taken by newspaper photographer Tommy Wilmott, for publicity purposes. It appears that Ruth is marching third from the front.

Ruth was discharged on November 27, 1946, after serving with the RCAF since April 16, 1943. She passed away in 2007, leaving behind a visual legacy of World War Two in Canada, through her eyes and the lens of her camera. 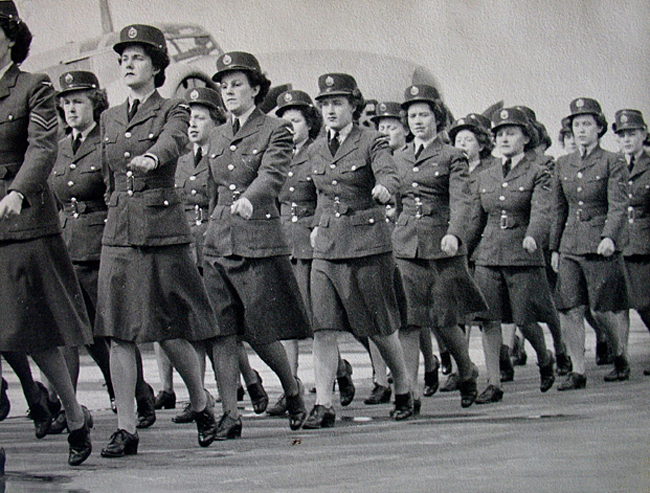 Anne Gafiuk is a former elementary school teacher in Calgary, Alberta, who turned to freelance writing. While researching RCAF pilots for a fictional story, she became very interested in vintage aircraft, the people involved with them and their history, taking her on a new flight of discovery. 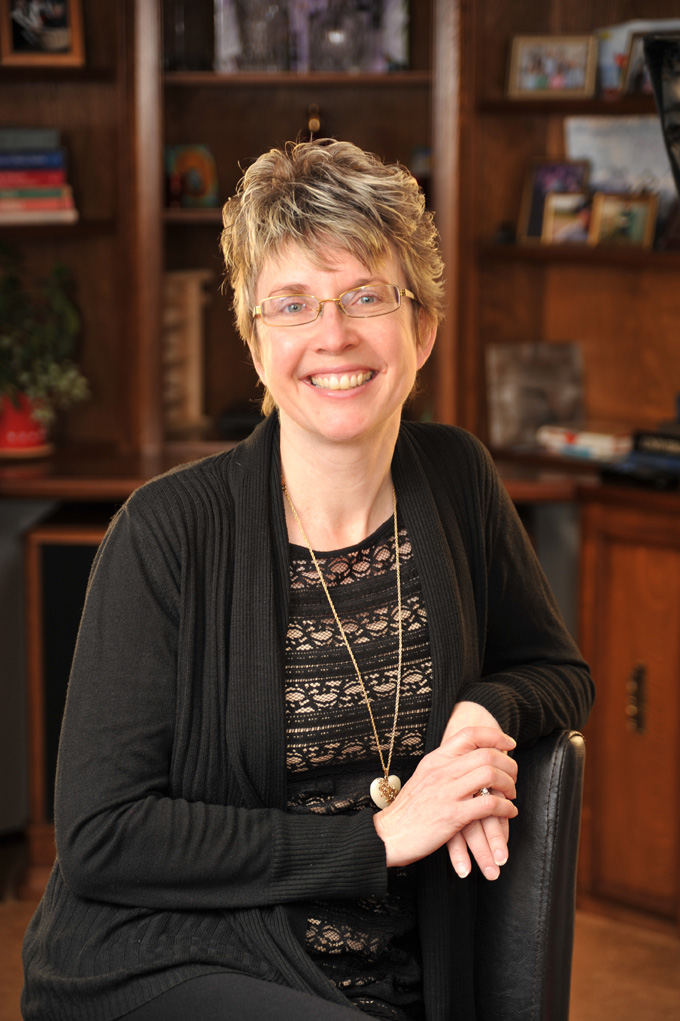