A treasure trove of photographs showing members of the Royal Canadian Air Force Women’s Division performing their wartime duties has fallen into my hands. Although women weren’t allowed to fly or to engage in combat during the war, they filled many other valuable roles and these photographs show them hard at work.

People often ask me what airwomen did during the war. “WE SERVE THAT MEN MAY FLY” was the motto of the Women’s Division and that sums it up: they were trained to do any job that a man could do, freeing up a warm male body to go overseas and fight.

Two years ago I was thrilled to be a guest speaker at the RCAF Airwomen’s Reunion in Whitehorse, Yukon. Recently a lovely lady named Irene Parkes of Langley, B.C., who tirelessly organizes all the old scrapbooks and records for the group, ran across a batch of wartime photos, so she kindly sent them to me.

Since these are marked NATIONAL DEFENCE PHOTOS, the originals must belong to the federal government, but as they are probably languishing in some dusty vault in Ottawa I would never know of their existence.

They are beautiful, professional photos obviously taken for publicity purposes, so I am sharing them with the world here on my blog.

Although there is only one typed line of sketchy information on the back of each photo, none of the airwomen is named. Perhaps someone who reads this might recognize a mother or grandmother or aunt and let me know!

This first photo shows a smartly-dressed WD (member of the Royal Canadian Air Force Women’s Division) holding a propeller in a very self-conscious pose, likely at a British Commonwealth Air Training base somewhere in Canada. Note the guys working on another aircraft in the background. 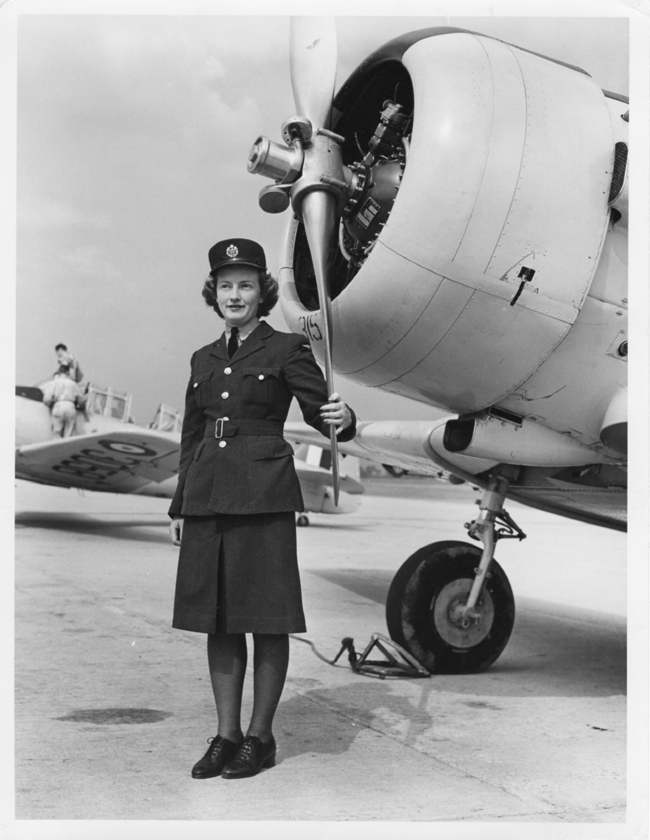 These three women must have joined up early, because they are still wearing the old pie crust hats, modelled after the British Women’s Auxiliary Air Force hats. Later these were replaced by the snappier version shown in the top photo. To read my earlier blog post about women’s uniforms. click here: Hats, Helmets and Headgear. 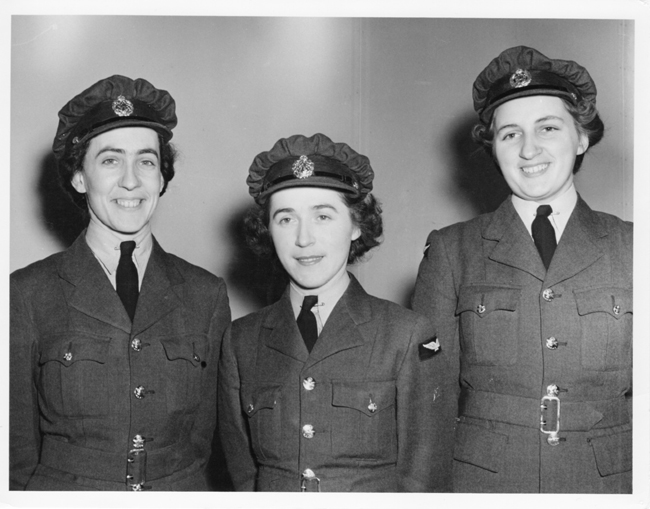 Naturally there was masses of paperwork involved in housing, training and transporting about 200,000 Canadian men who served in the RCAF during the Second World War, and here one of the WDs sorts correspondence. She is wearing a khaki dress with red shoulder badges, the lightweight summer uniform for the WDs.

These three women must have been very good at their jobs, because they were among the chosen few who left Canada and served overseas in the United Kingdom. They are Telephone Operators, working the switchboard at one of the six RCAF bombing stations in northern England. 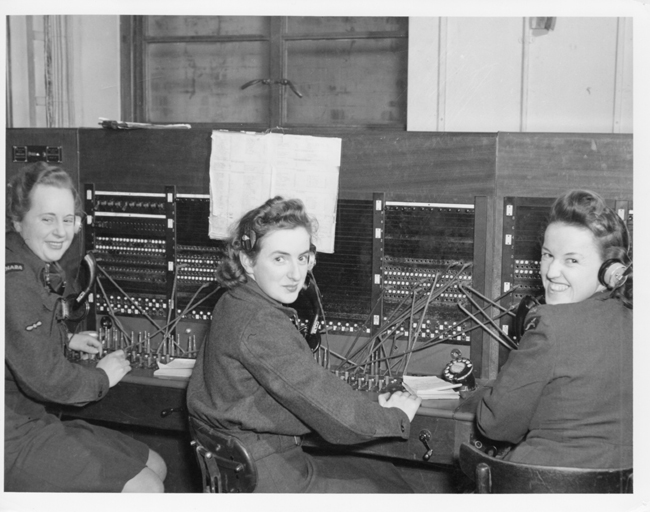 According to the information provided, these women are Equipment Assistants, working in the supply section of an RCAF station. The equipment on the shelves in the background looks like dishes, but of course feeding tens of thousands of men was another huge organizational task. Naturally women also did much of the cooking and food preparation. 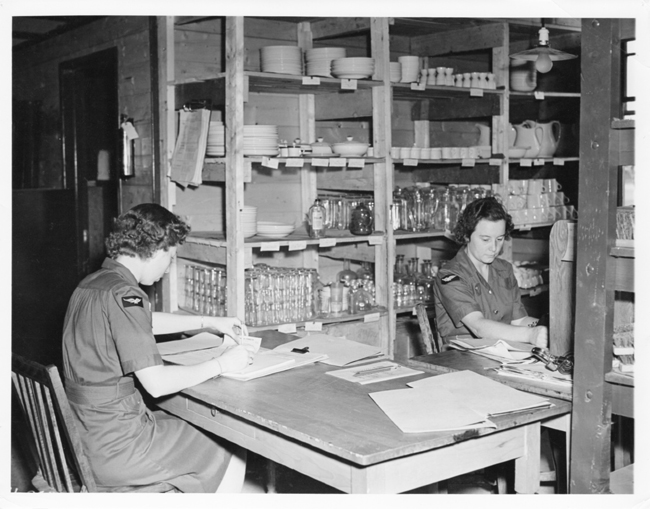 Here an accounts clerk checks totals in a ledger at an RCAF training station. Keeping track of expenses must have been a challenge, and of course the men had to be paid regularly. In the armed forces during the Second World War, a Canadian woman performing the exact same job as a man received two-thirds of his salary. The government must have saved a small fortune! 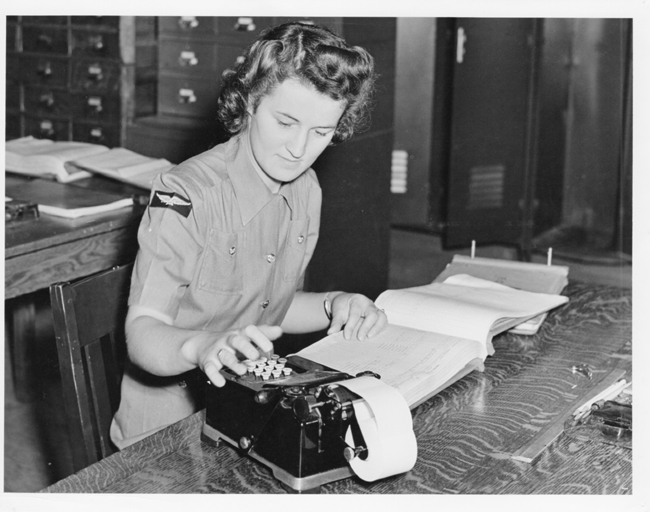 The information on the back of this photo says only that she is a member of the  RCAF Women’s Division working as a lab assistant in a laboratory. Perhaps someone could enlighten me — did the RCAF conduct its own medical testing, or would the labs be used for something else? 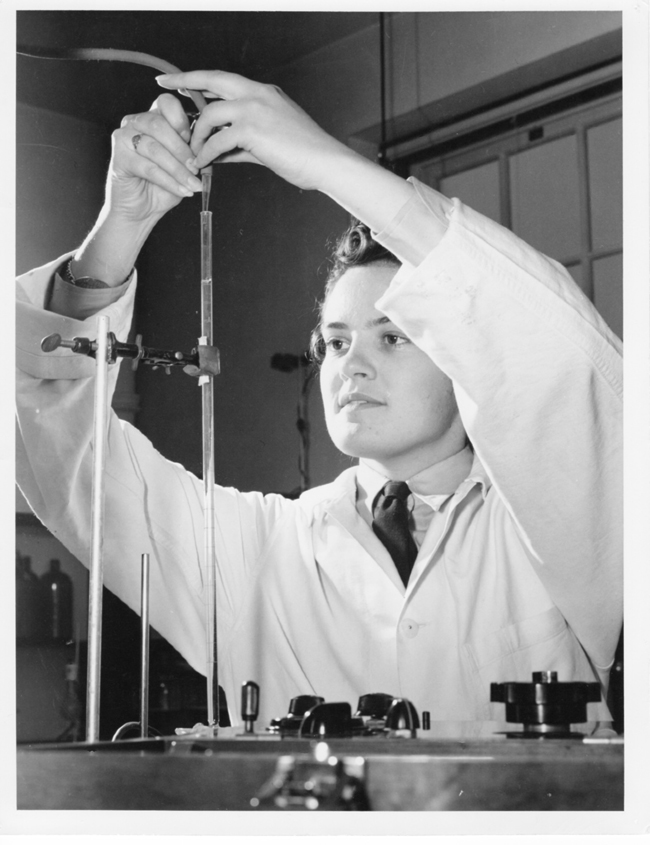 The mechanical trades, too, saw women filling many vital roles during the Second World War. Here an airwoman works as a tester in the spark plug shop on an RCAF flying station. 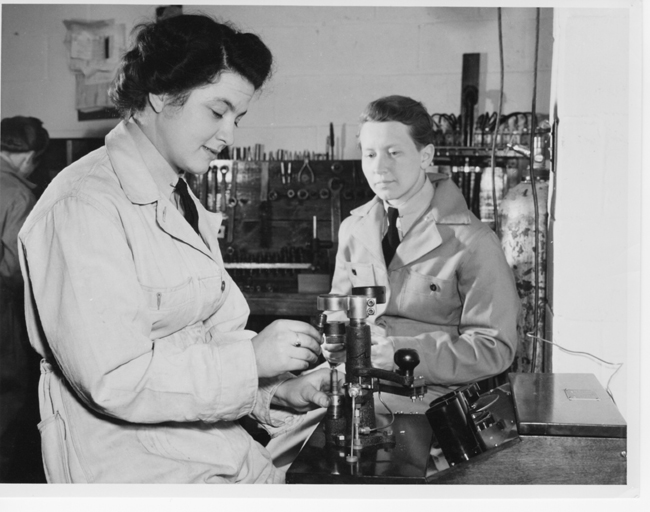 Photography was a popular trade for women during the war, especially because it allowed women to ride in the aircraft. This is a special interest of mine and you can read more about women photographers by searching the index on this site.

(My wartime novel Bird’s Eye View is fact-based fiction, the story of a Canadian woman who joins the air force and serves in England as an aerial photo interpreter. To read one thrilling chapter, click here: Bird’s Eye View Excerpt.) 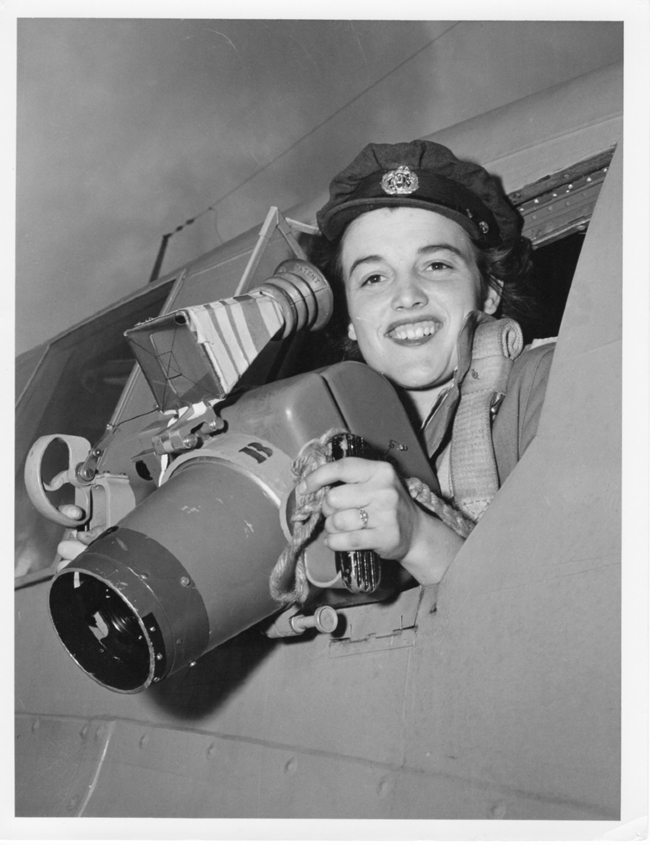 Now this would be a vitally important job: keeping track of aircraft maintenance records. The blackboard in the background lists items such as: Time of Last Major Overhaul, and Fuel Tank Drop Due. Fatal accidents were commonplace on air training bases, usually due to human error. 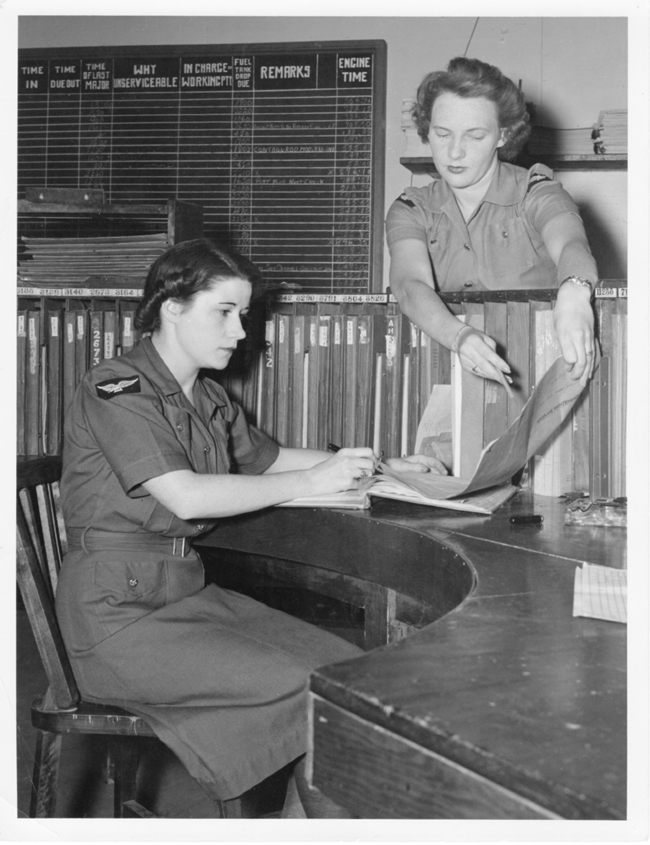 Like the men, members of the Women’s Division practised precision marching and drilling. Some of the women veterans I have interviewed loved this aspect of their life in uniform, while others hated it! The women seen here in an airport hangar don’t look like they are enjoying it much. 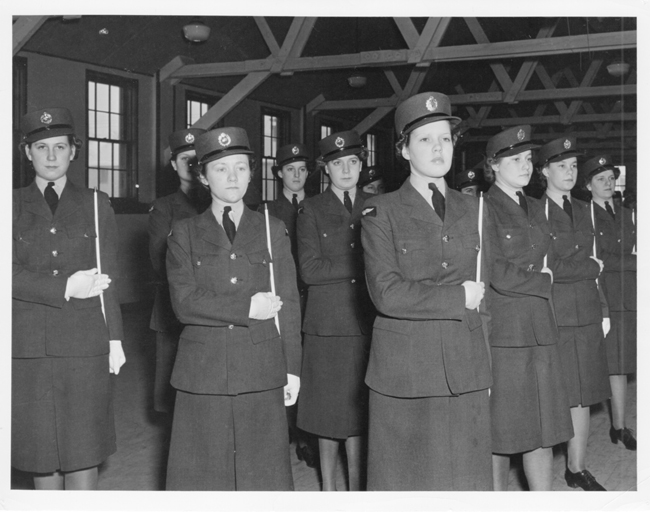 If you had any musical ability, you could audition for the Women’s Division Brass Band. Here three members, wearing white belts and band crests on their sleeves, play their wind instruments. 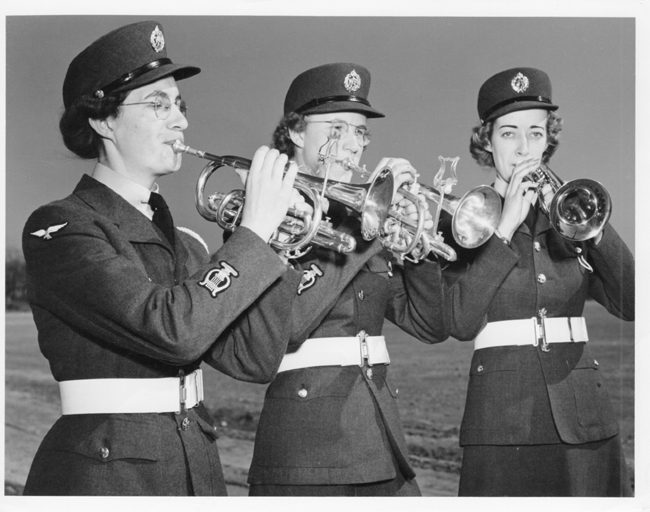 And here’s the entire band complete with drummers performing at the RCAF Station in Winnipeg in 1943. Note all the aircraft parked in the background. 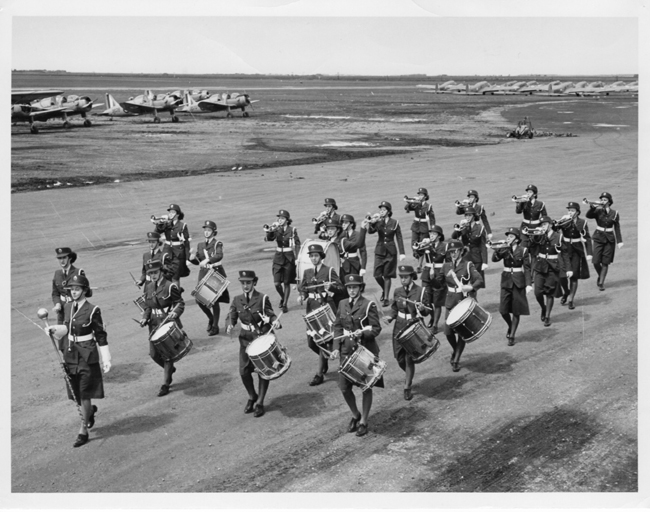 Plotting aircraft positions in the surveillance rooms of RCAF radar stations was done by WDs in wartime. It seems cumbersome now, but prior to the invention of more sophisticated techniques, the positions of aircraft were marked by hand on a big aerial map. 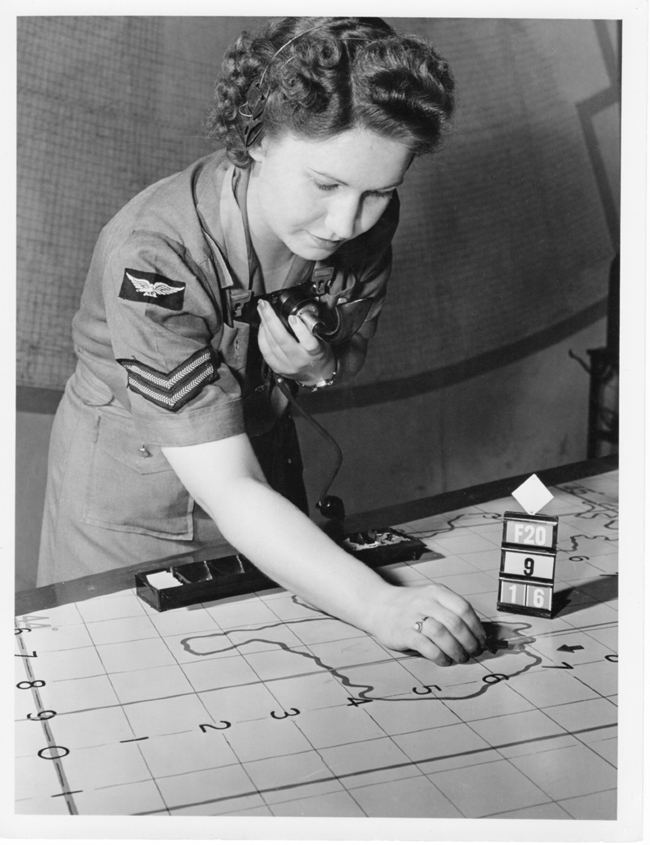 Keeping the emergency equipment repaired and ready for service was also performed by women. Here an aircraft emergency dinghy is checked by a WD at RCAF Station Summerside in Prince Edward Island, 1943. Many flyers owed their lives to these inflatable dinghies after baling out over the icy sea. 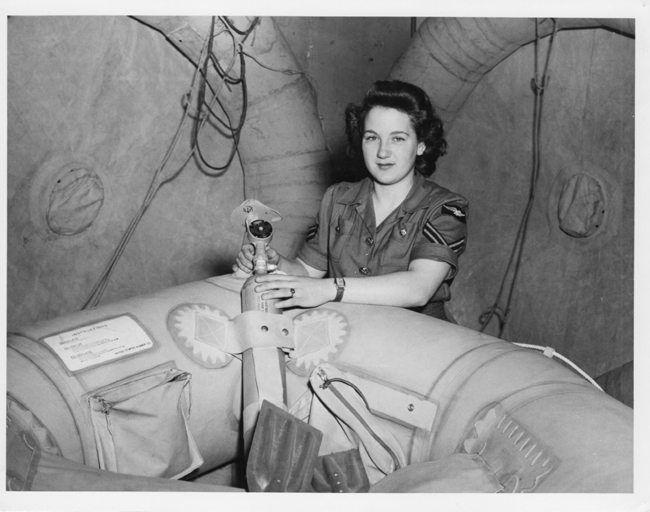 A stitch in time becomes more important when the subject is a parachute. In the Second World War, this RCAF Women’s Division member repairs a parachute on her sewing machine. The parachutes had to be regularly inspected and mended, and properly packed so they would open when the rip cord was pulled. To read my earlier post about the importance of keeping the parachutes in good working order, click here: Chute Girls. 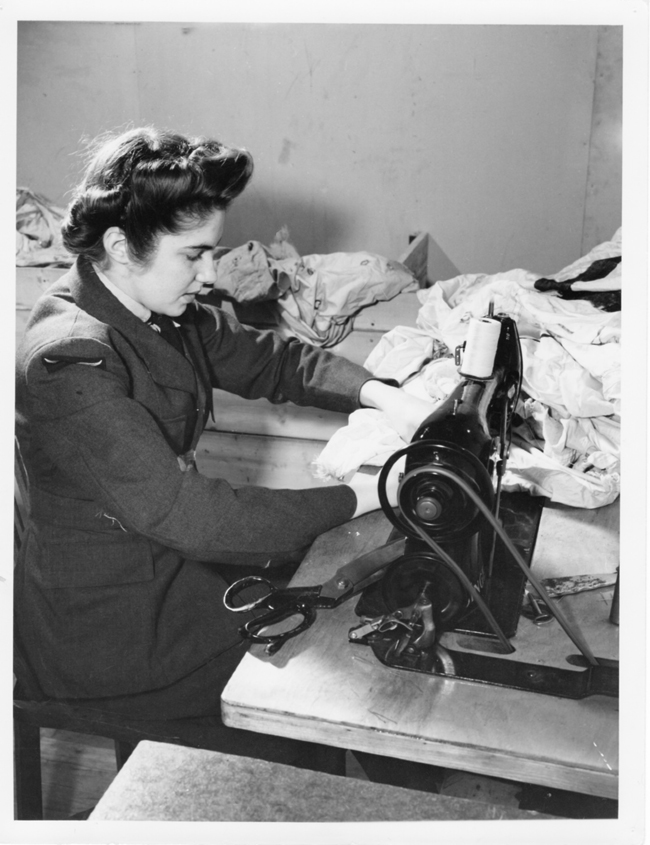 At RCAF Station Winnipeg, WDs repair the fabric-covered aircraft parts. It looks like they are actually stitching up the tears by hand. The aircraft used back then seemed shockingly flimsy. 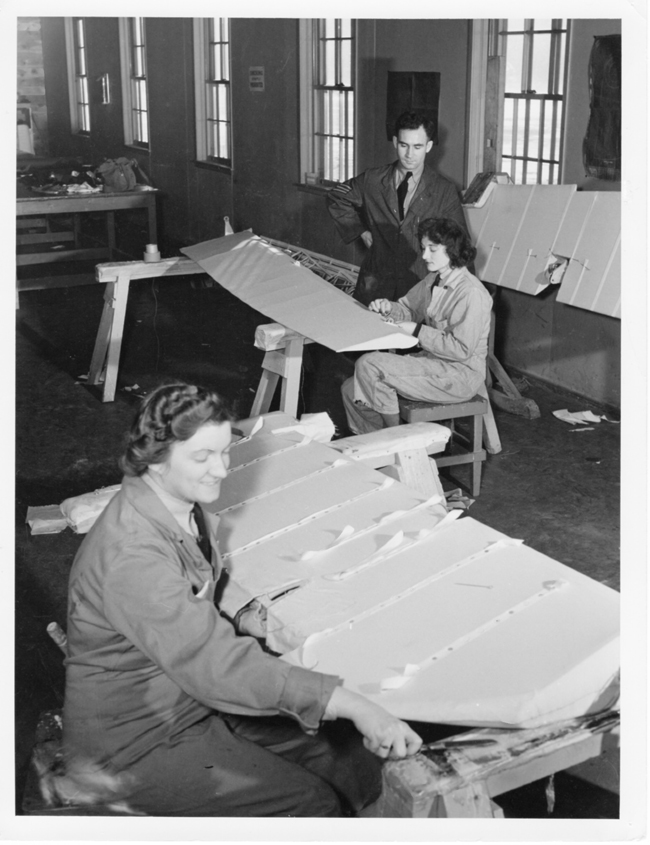 Painting the aircraft, too, was a job easily and efficiently performed by women. For the dirty work, they were allowed to wear one-piece coveralls. 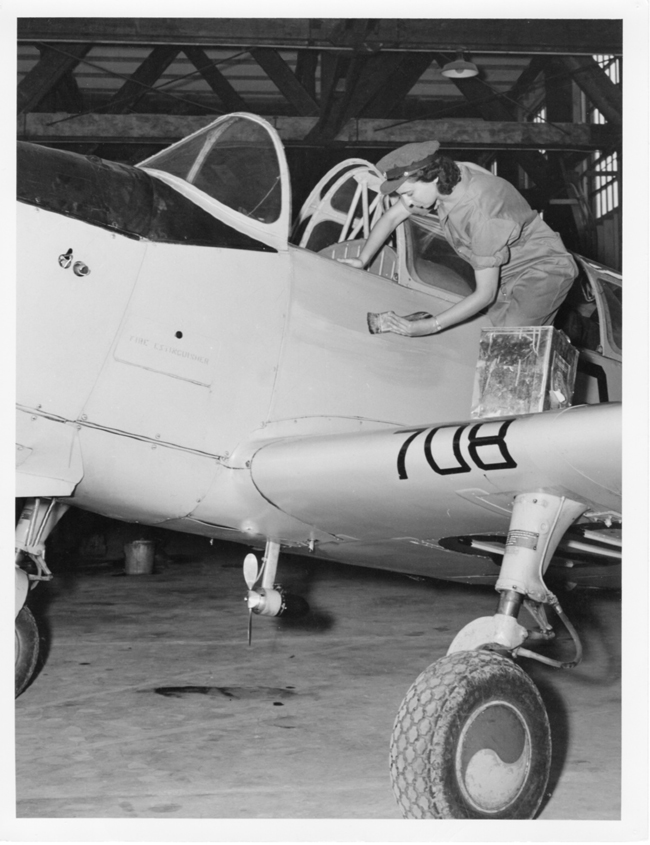 Finally, women didn’t just paint and repair the exteriors — they also worked as aircraft mechanics. Here is a WD getting under the aircraft to fix a problem that might have cost a pilot his life. She appears to be wearing the hated cotton lisle stockings and black oxford shoes that were part of every uniform. 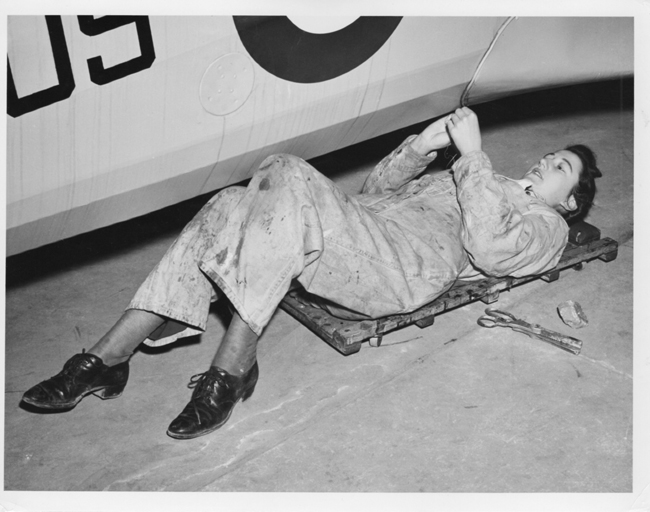 The Star Weekly was a Canadian newsmagazine published by the Toronto Star. This image shows a member of the RCAF Women’s Division carrying a supply of bullets. She wouldn’t use them herself, but she is delivering them to an aircrew. The bright yellow aircraft mean that this was an air training base somewhere in Canada. To see my collection of Star Weekly covers, click: Star Weekly At War. 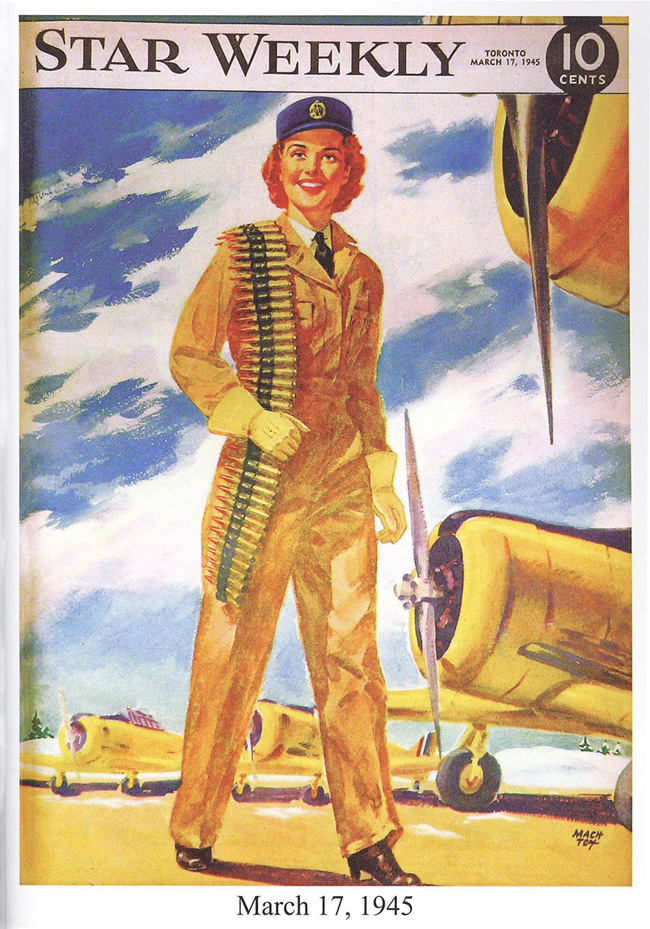