I have a personal connection with one of the oddest events in wartime history, when the German navy deliberately sank its own fleet at Scapa Flow in the Orkney Islands of Scotland. My husband’s grandfather was serving on one of those ships! 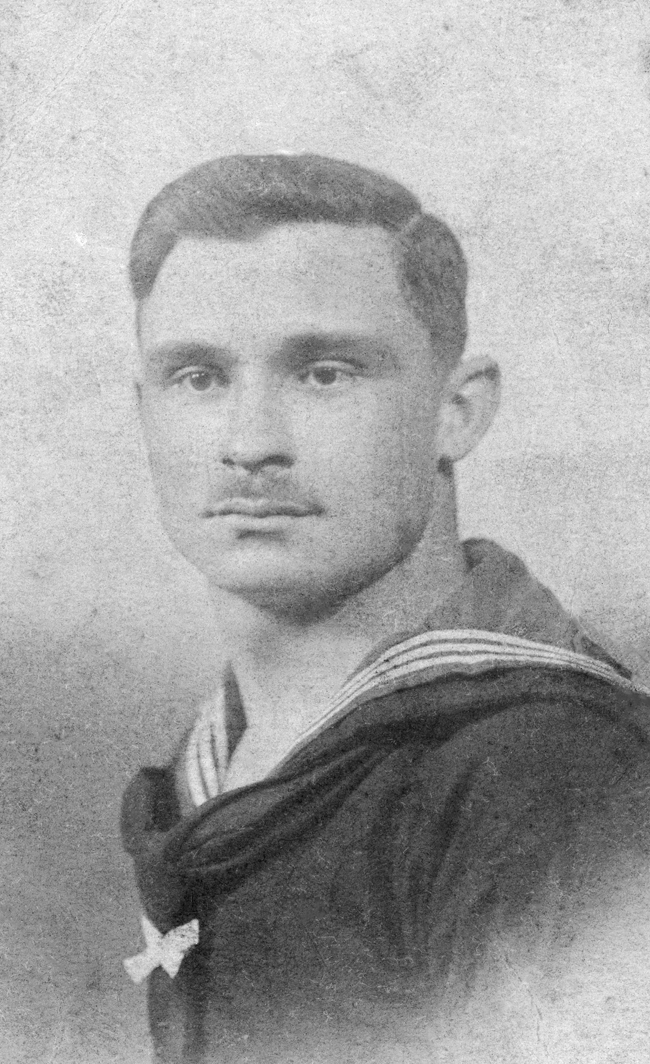 On our recent trip to Scotland, I searched for my own genealogical roots. Three branches of my family were Scottish, including one from the Orkney Islands. Read about my trip here: Bonny Scotland.

But we also discovered another fascinating aspect of our shared family history.

When we arrived at the tiny museum in Stromness, the town where the mainland ferry docks on the Orkneys, to our surprise we found a huge display of artifacts and information about the sinking of the German fleet after the First World War ended.

“My grandfather was there,” my husband remarked to the curator.

“Was he watching from the shore?” the curator asked.

The curator leaped from behind the counter and plied him with questions.

In the Orkneys, the scuttling of the German fleet was a huge event (as it was around the world, although now mostly forgotten) but rarely does someone show up at the museum whose grandfather was a participant!

My husband, too, was pleased that his grandfather’s experience was so well researched and commemorated. 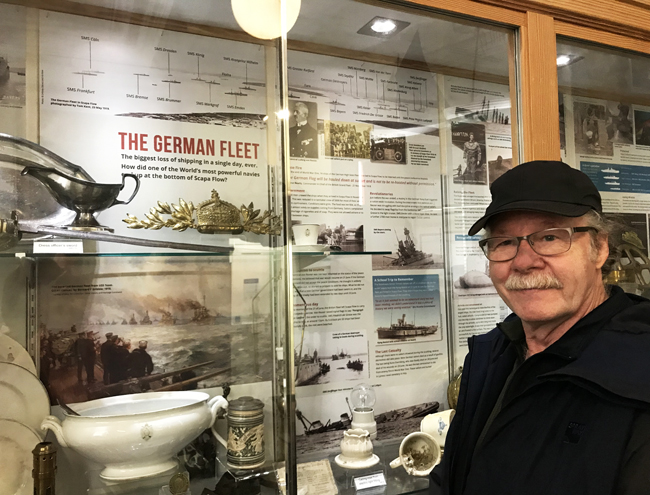 After the Armistice was signed on November 11, 1918, the German Navy was ordered to surrender its entire fleet of ships at Scapa Flow. They sailed into this huge harbour where there was a British naval base, and sank anchor.

The ships were still the property of the German government, and as such, no British guards could be stationed on them.

After their arrival in Scotland, about 20,000 seamen were returned to Germany, but a skeleton crew of 1,800 men (including Georg Kernchen, my husband’s maternal grandfather) remained to look after the ships while they awaited their fate.

During the subsequent peace talks, the Allied powers used these 74 ships as bargaining chips and the debate went on for months.

For seven long months they were confined to their evil-smelling ships – with appalling living conditions and often hungry because their rations were so poor. Supply vessels brought them fresh water, but little else.

One story goes that an Iron Cross — one of Germany’s highest medals — was once traded with a British sailor for a bar of soap. Fishing was the only occupation for these bored, restless men who were virtual prisoners.

Here’s a photo found at the Stromness Museum, showing a group of sailors aboard the SMS Grosser Kurfurst.

Their placard tells the tale:

“For the benefit of the homeland. Shunned by the homeland, deserted by everyone. Yet we have remained.” 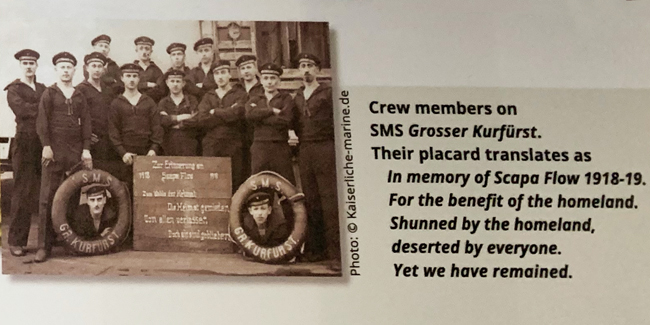 One of the men on board the SMS Moltke, a large battleship, was young George Kernchen, who spent four years of his life fighting in some very vicious naval battles, only to be imprisoned on his own ship.

Here’s his proud ship the SMS Moltke. She participated in most of the major fleet actions conducted by the German Navy and was damaged several times, including being torpedoed twice by British submarines. 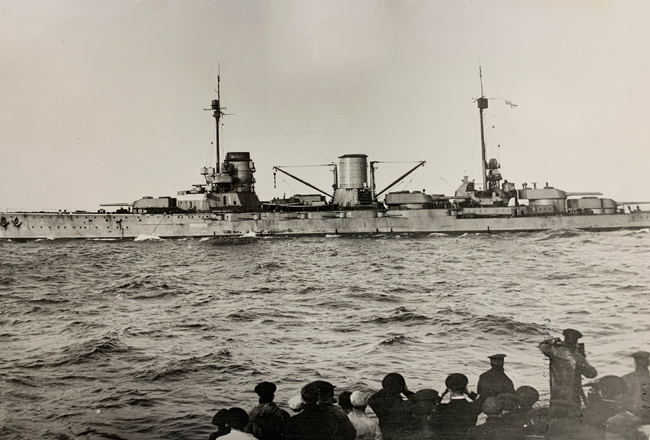 What a relief it must have been on June 21, 1919 when the order came down from German High Command: “ Sink them all!”

Around 10 a.m. on June 21, 1919, the German commander Admiral Ludwig von Reuter sent a flag signal ordering the fleet to stand by for the signal to scuttle.

At about 11:20 a.m. the flag signal was sent: “To all Commanding Officers and the Leader of the Torpedo Boats. Paragraph Eleven of today’s date. Acknowledge.”

Paragraph Eleven was a secret signal that, loosely translated, means: “Keep on drinking!” The signal was repeated by semaphore and searchlights.

For the first forty minutes, nothing happened — then the first ship, Friedrich der Grosse, began to lean heavily to starboard.

All the crews raised the German flags on their ships one last time, before boarding the lifeboats and rowing to shore. 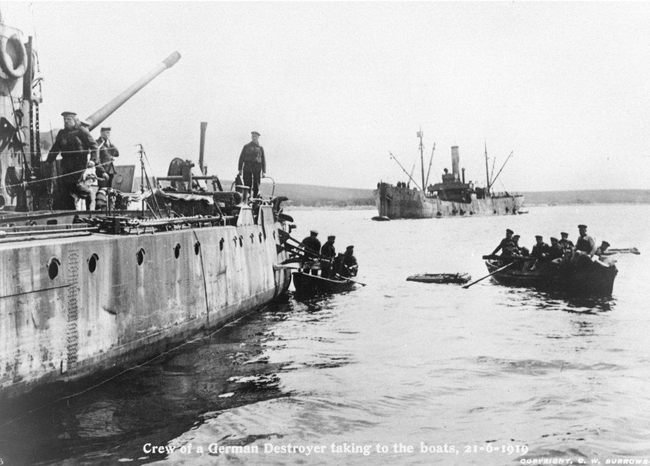 The British Navy frantically launched their own boats and tried to prevent the German ships from sinking. They succeeded in rescuing 22 of them – but the other 54 ships sank straight to the bottom of the ocean. 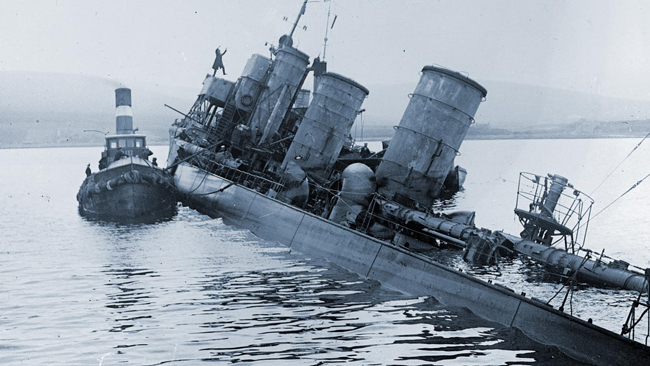 By 5 p.m. that day, all 54 ships had disappeared from sight beneath the waves. 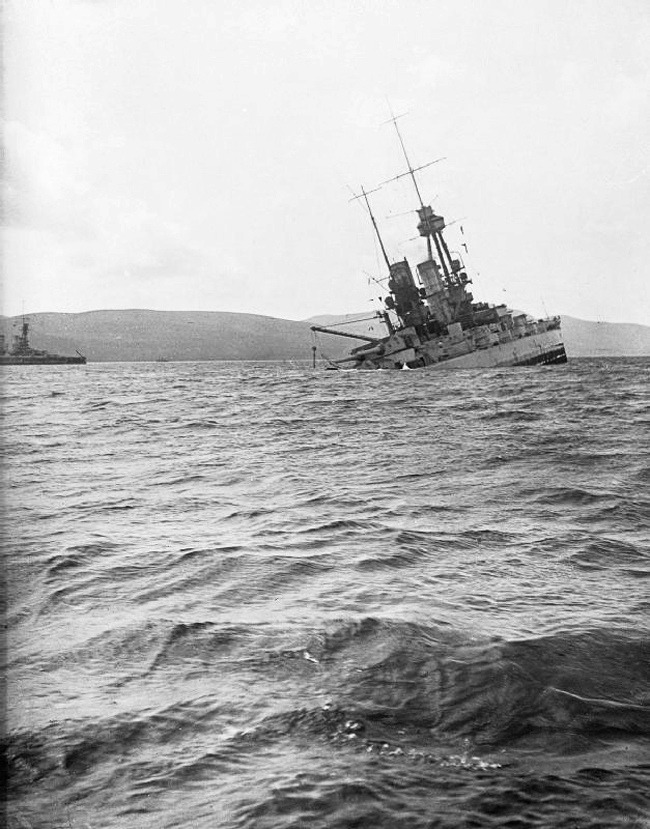 While the astonished Orkney residents stood on shore and watched the incredible event, another group had an even closer look.

By coincidence, a school outing of 160 children were on a smaller vessel nearby, admiring the ships, when they suddenly began to sink.

James Taylor, who was 16 years old at the time, later recalled: “Suddenly, without any warning and almost simultaneously, these huge vessels began to list over to port or starboard; some heeled over and plunged headlong, their sterns lifted high out of the water. Out of the vents rushed steam and oil and air with a dreadful roaring hiss.”

The sinking ships spewed out furniture, clothing and other items and sent massive bursts of air up to the surface in a final, explosive farewell.

It was a school trip none of the kids ever forgot! 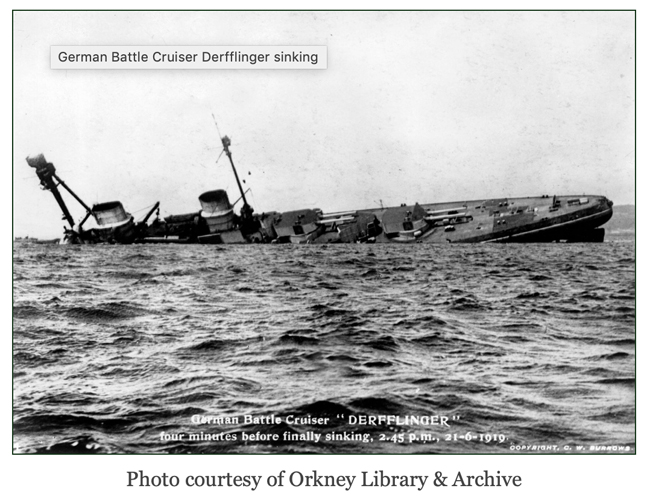 Naturally, the Allies were furious at the loss of the ships, although one British Admiral said it was a relief. “It disposes, once and for all, the thorny question of the redistribution of these ships.”

They had barely settled on the bottom when the biggest salvage operation in history began.

Various private companies including iron and steel businesses purchased the ships and raised them to the surface, an operation that went on for decades.

Currently only seven ships still lie at the bottom of Scapa Flow and they provide for some of the best deep sea diving in the world.

Here’s the poor old Moltke. She was raised in 1927 and towed down the coast to another port where she was used for scrap. 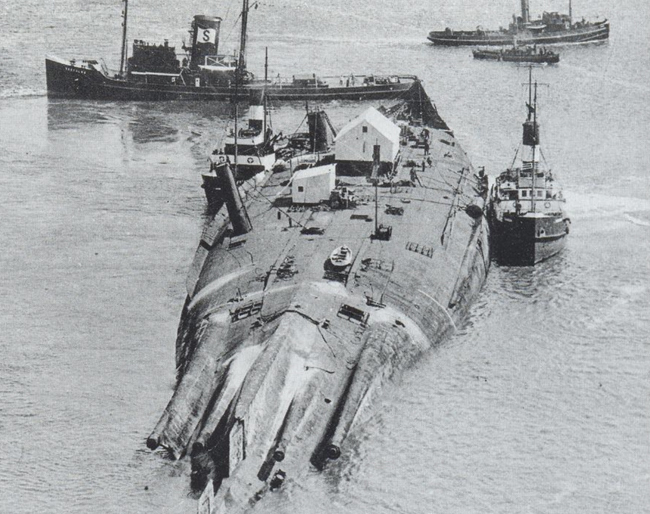 Over the years all kinds of artifacts from bells to binoculars were fished from the sea or retrieved from the bottom by local divers.

The curator told us some of them are still finding their way to the museum after all these years, located in people’s closets and attics!

For the complete story of the scuttling at Scapa Flow, visit the museum website here: Stromness Museum. 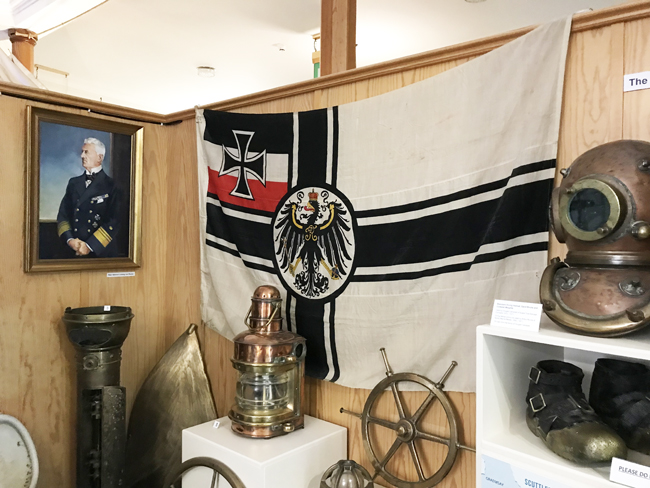 Poor Georg’s life was not a happy one. After their surrender, he and his fellow sailors were escorted to a prison camp in England, where he languished for another seven months before the Allies finally released them.

He returned home to Berlin, married and had three children. Here he is pictured in 1928 with his wife Adelheid and baby Gerda, my husband’s mother, who still lives in Berlin at the age of 94. 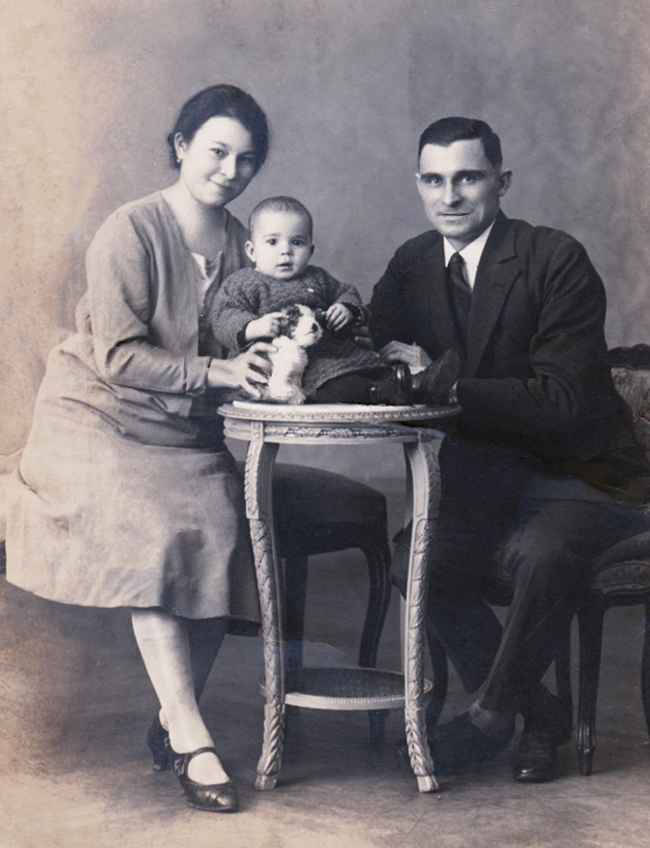 In 1939, the Second World War began. Now the father of a son and two daughters, Georg was too old to fight but he served as his neighbourhood’s air warden in Berlin and tried to keep his neighbours safe during the nightly bombing raids.

Sadly, Georg’s son Heinz joined the army and disappeared on the Eastern Front.

After the Germans surrendered again in 1945, Georg was taken prisoner by the Russians and later died at the infamous prison camp, Sachsenhausen in northern Germany.

Born in 1897, he was probably about 50 years old when he died — nobody knows for sure, as the Russians never kept records of the deaths of their prisoners.

To read more about how Gerda and her family suffered during the Second World War: The Bombing of Berlin.

Even worse was their experiences after the war ended: The Battle for Berlin.

Gerda later married and had two sons of her own — one of them is my husband Heinz, who emigrated to Canada in 1974.

While in Scotland, we drove past Scapa Flow, a vast harbour that lies between several of the islands. A floating oil rig is the only vessel to be seen in the distance. It looked very peaceful in the summer sunshine. It’s hard to believe such an astonishing event took place in these waters. 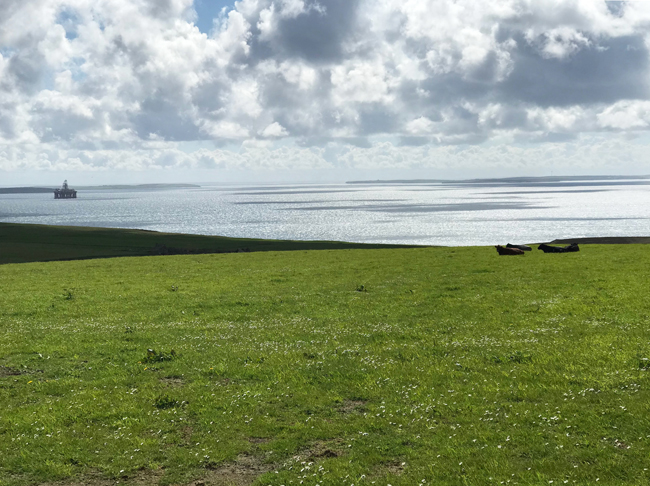 Scapa Flow is a veritable graveyard of sunken ships — this old rusted hull sits beside the causeway between two islands. 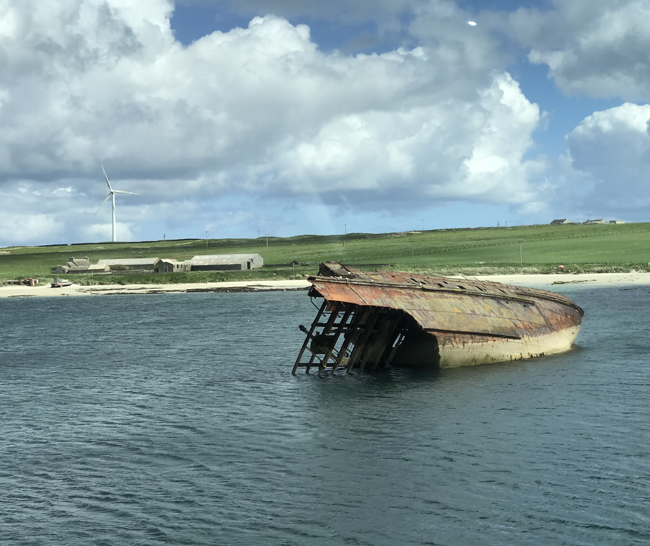 At the end of our tour, we visited the local pub in Stromness and raised a pint of Scapa Special Flagship Ale in Georg Kernchen’s memory. Here’s the coaster. 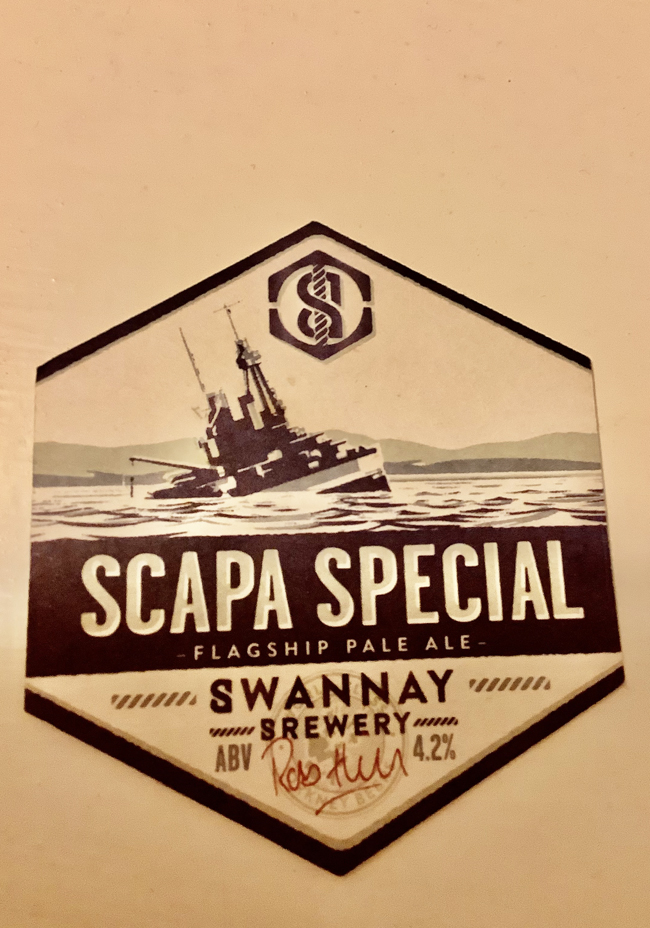 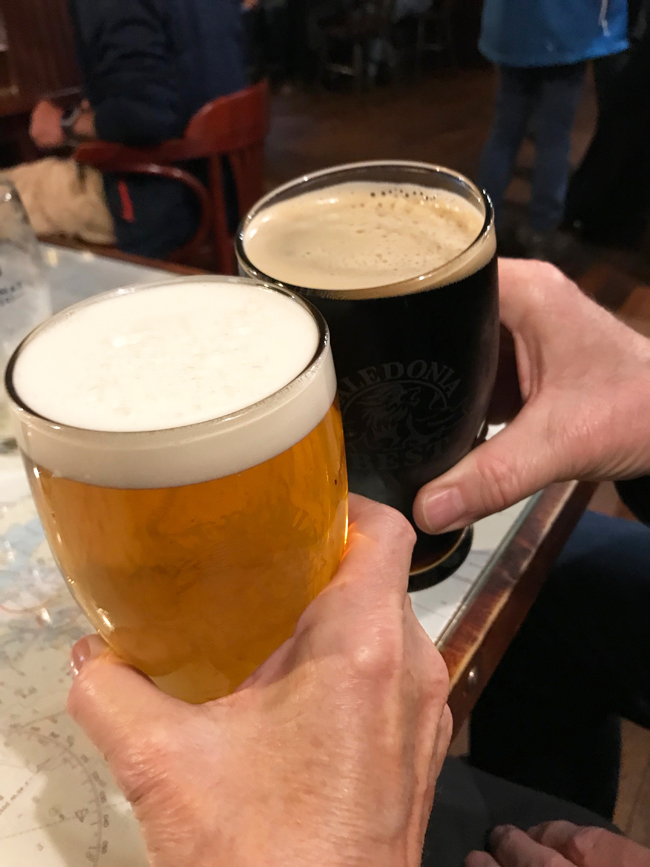 Yvonne Valleau Wildman joined the Royal Canadian Air Force Women’s Division and was trained as as a photographer. After the war, she married a fellow veteran and farmed at Flaxcombe, Saskatchewan, where she raised six children. Born on August 1, 1923,  Yvonne celebrated her ninety-ninth birthday earlier this month. Thank you for serving our country, Yvonne! Read her story here: Yvonne Valleau Wildman. 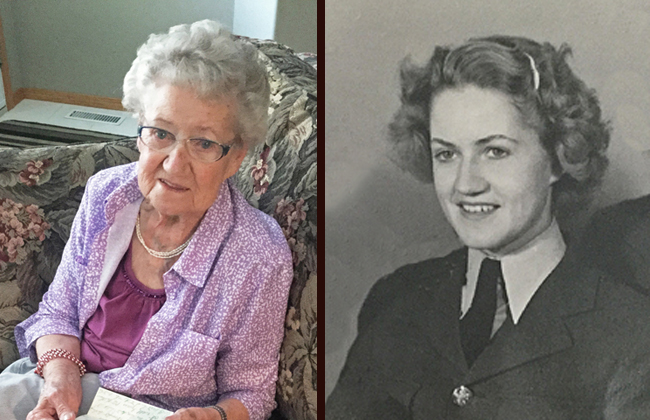 Friends, as I gaze out my window I can see a plume of forest fire smoke rising above the mountains. Called the Mount Docking fire, it is about fifty kilometres from our home, but still pretty fearsome in appearance. One year ago, I wrote about our evacuation plan, and you can read it here: What to Save in a Fire.

Otherwise, the weather has been hot and sunny and beautiful and we’ve made frequent visits down to the shores of Lake Windermere (which thankfully lies between us and the fire) to cool off.

I trust you are enjoying the very best of our lovely Canadian summers. 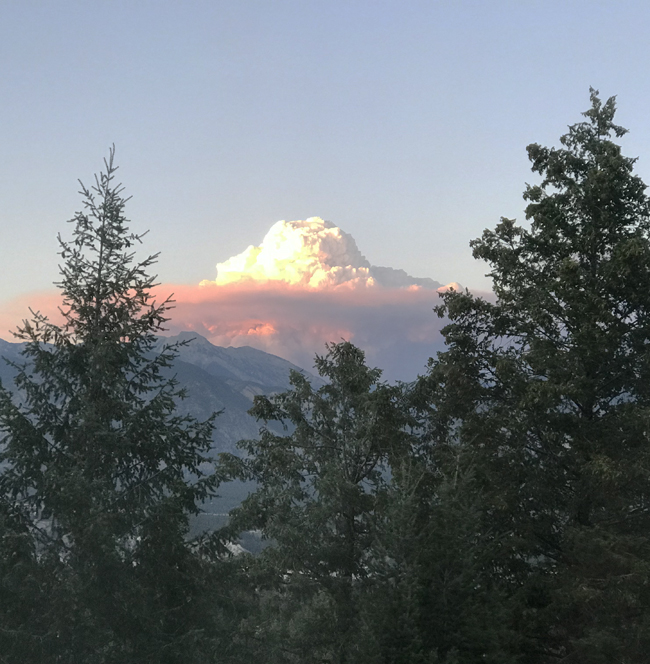