Scran is the traditional Scottish word for food. Here I share some of the mouth-watering meals, including this Sunday Roast Beef Dinner, that we enjoyed on our recent tour of this wonderful country. 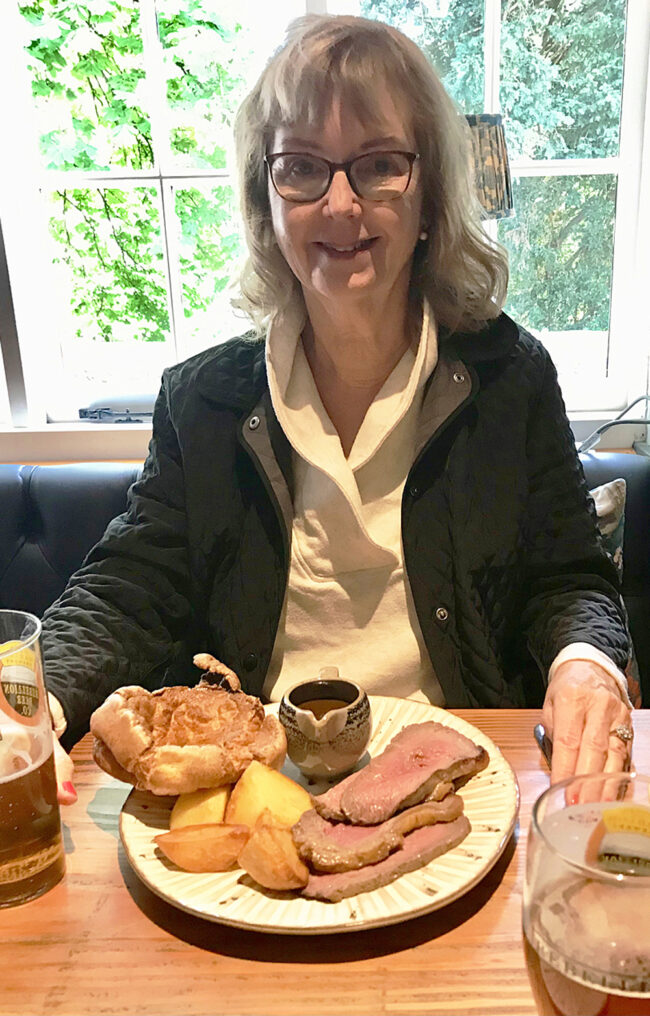 After spending a few days in England, where I was delighted to speak at the lovely Danesfield House Hotel west of London, we took a short flight to Glasgow and drove a rented car around Scotland for one month, as far north as the Orkney Islands. To see my post about this Victory in Europe Anniversary event: Danesfield Dream Come True.

Next month, I will share some highlights of our Scottish trip. But since I’m still busy unpacking and adjusting to a “normal” life, I decided to first show you some of the scran we devoured along the way.

Scotland isn’t famous for its food, so we were very pleasantly surprised to find that our meals were delicious — and served in huge portions! The top photo shows a meal that appears on most pub menus every Sunday, a traditional Roast Beef Dinner, complete with Yorkshire pudding and potatoes.

(Scottish scran has one small drawback. You will notice in these photos that green vegetables and salads are not high on the priority list!)

When we checked into one Bed and Breakfast, the owner apologized for being unable to serve a full breakfast. While I gloomily imagined a bowl of cornflakes, he added: “All we can give you is bacon, eggs, sausages and toast!”

The Full Breakfast (in England, called the Full English — but that’s a different country entirely) includes not only all of those things, but also fried tomatoes, mushrooms, baked beans, and blood pudding. Blood pudding is a dark sausage made from animal blood, filling and spices — cut in rounds and fried along with everything else. My husband said it was delicious. I will take his word for it. 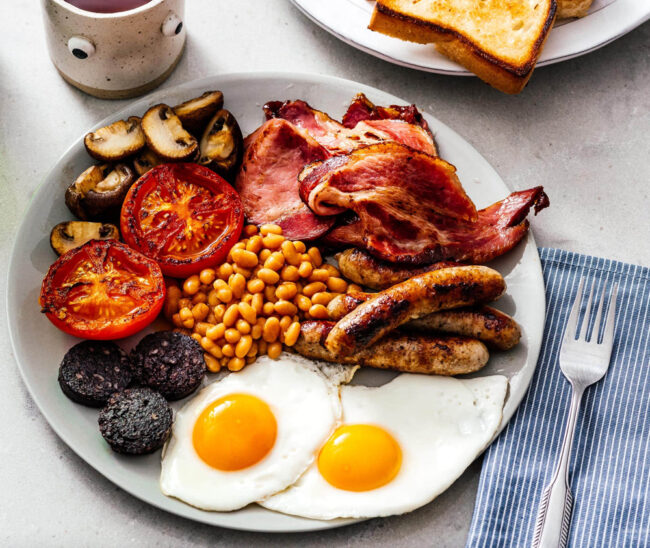 If you prefer a lighter breakfast, there’s always a Bacon Butty, the term for sandwich. That’s either a bun or two slices of bread stuffed with sizzling hot bacon. My husband ran across the street from our Glasgow hotel one morning to grab a coffee, and found the grill in the coffee shop sizzling with pounds and pounds of bacon, while a lineup of people waited for their Bacon Butties To Go! 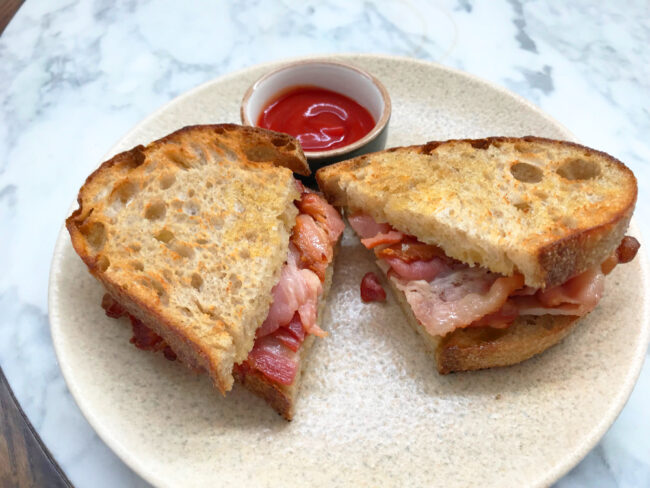 We are still chuckling about this one.

When we checked into our Bed and Breakfast in the seaside town of Arbroath, our hosts presented a breakfast menu so we could choose our items for the next morning. My husband checked off two fried eggs and two smokies, assuming that an “Arbroath Smokie” was a sausage.

Much to his dismay, when we sat down at the breakfast table, our host presented him with two entire smoked haddock — along with his fried eggs and toast on a separate plate. My husband manfully managed to finish one of them, but he refused to touch smoked fish for the rest of the trip.

Little did we know that Arbroath Smokies are famous — we encountered them on menus all over Scotland! 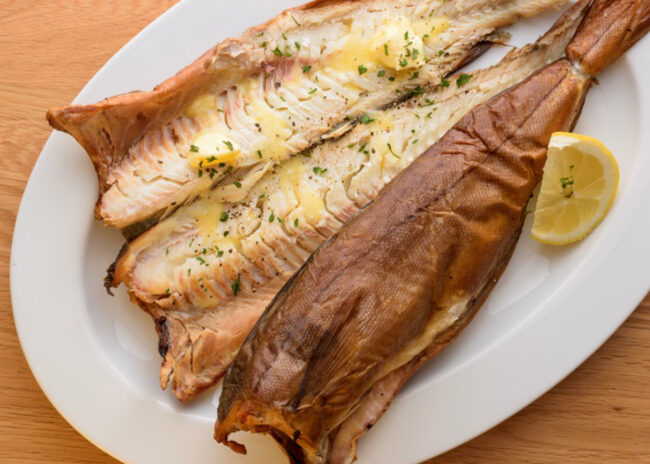 And here’s a recommendation if you are in Arbroath — we found our Swiss hosts, who recently purchased Brucefield Boutique B&B, to be delightful. The place is just one block away from a fantastic seaside cliff walk. 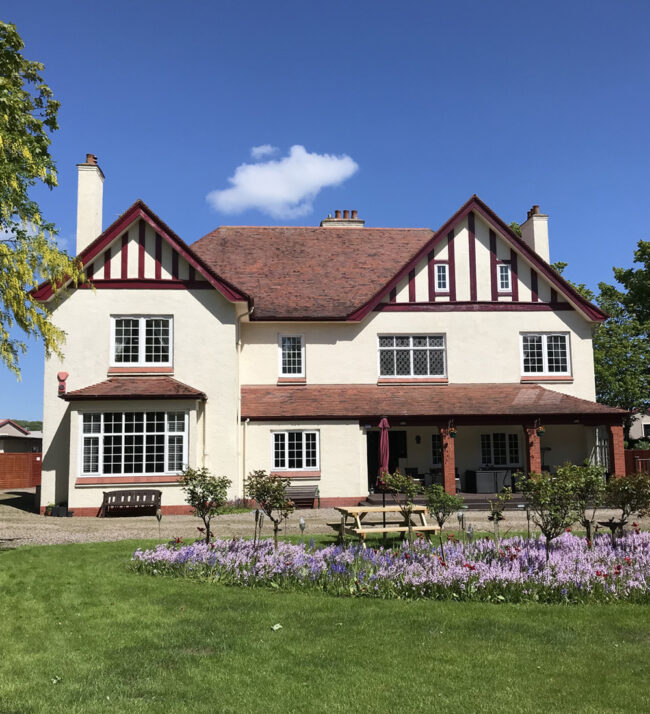 Speaking of smoked haddock, another famous dish served in many restaurants is “Cullen Skink.” Since we stayed in Cullen, another seaside town on the eastern coast, I had to try some. It is a delicious chowder made from potatoes and smoked haddock, here accompanied by oat cakes rather than crackers. I ordered this dish as an appetizer. 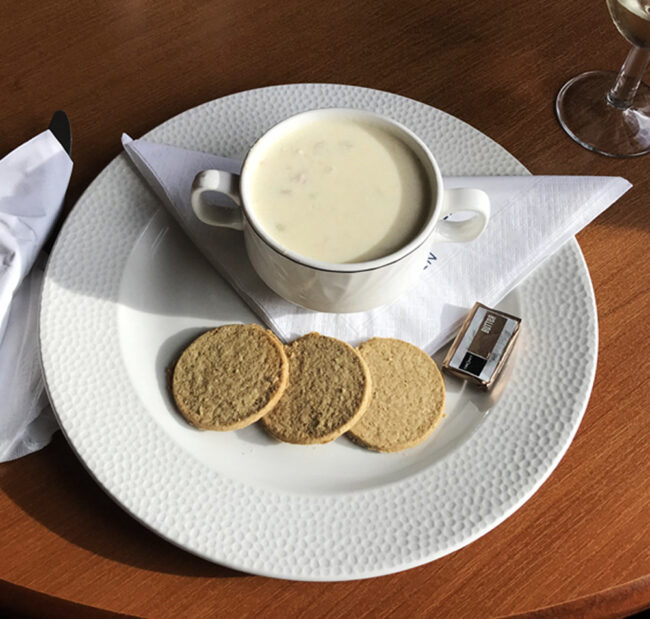 Any country whose population lives within hailing distance of the sea (unlike me, who lives about one thousand kilometres from the nearest ocean) has access to fresh fish. And therefore fish and chips is a staple of the Scottish diet. The batter is incredibly light and tasty, and the fish simply melts in your mouth.

The chips (never called fries) are also fresh and flavourful. (What we call potato chips, they call “crisps” in Scotland.) The potatoes or tatties (pronounced totties) are also very appetizing.

My tiny side dish here was “mushy peas” which tasted like fresh peas, but had the consistency of pea soup. Thank goodness I asked for one piece of fish rather than two, as the portions are so generous. Across the table, my husband is enjoying a fish burger and chips dipped in mayonnaise, always offered as an alternative to ketchup. 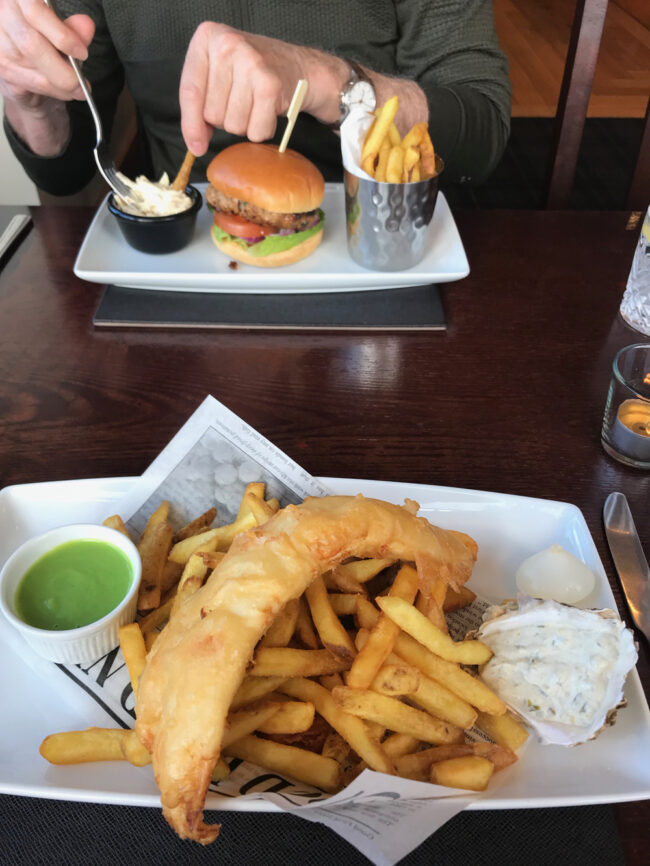 Of course, there is no shortage of ALL types of seafood and I ordered various dishes since we are so starved for fresh fish where we live. This was Sea Trout — no doubt pulled from the ocean that very morning. Again, it was absolutely heavenly. Since this was our last night in Edinburgh before flying home, we splurged and went to a nicer restaurant called Fishers Leith. 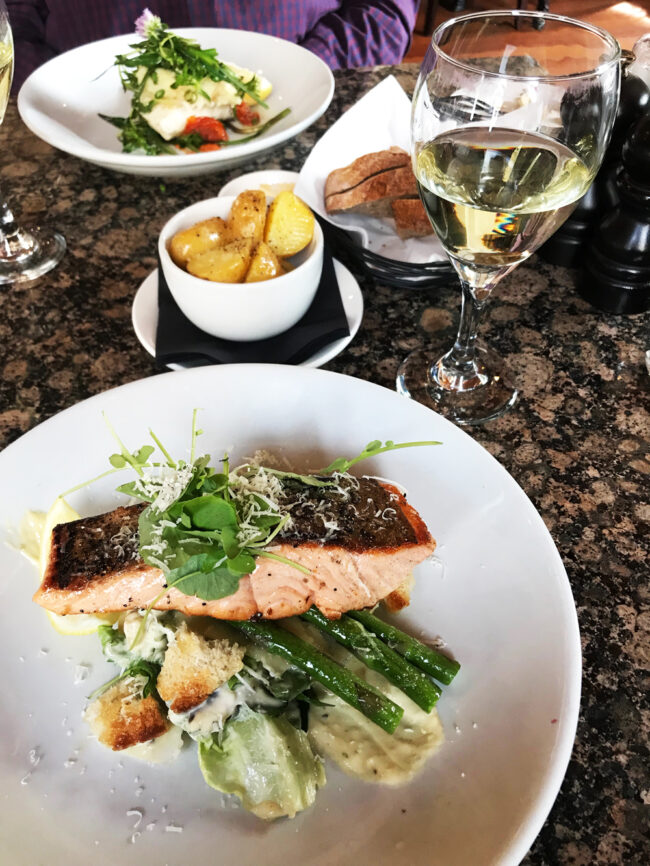 What could be more British than sausages (called bangers because apparently they used to explode when heated) and mash (short for mashed potatoes)? Mash is taken to new levels in Scotland, where it is served flavoured with cheese, garlic or other spices. This dish came with its own boat full of gravy as well (and you will notice nary a green vegetable in sight). We loved this version of bangers and mash, served at Edinburgh’s Mums Great Comfort Food. 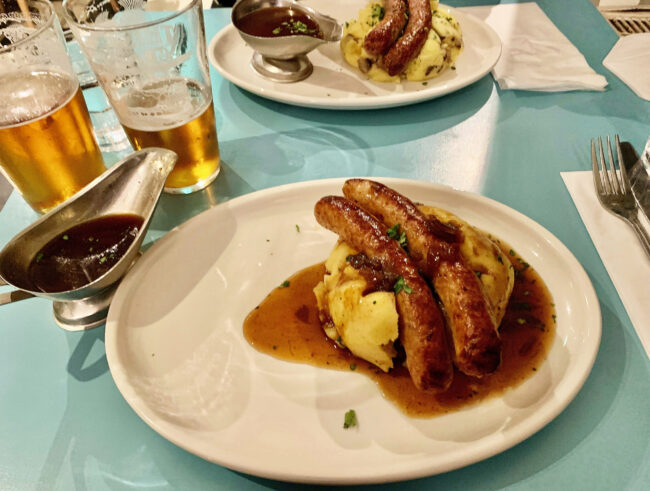 I have never seen so many sheep in my life as I saw in Scotland — hundreds of them on every grassy hillside. So it was no surprise to find lamb on almost every menu. I don’t care for lamb (my Canadian prairie upbringing, no doubt, where sheep are scarce), but my husband ordered lamb numerous times and enjoyed every bite. This helping of lamb was served on a bed of mash. 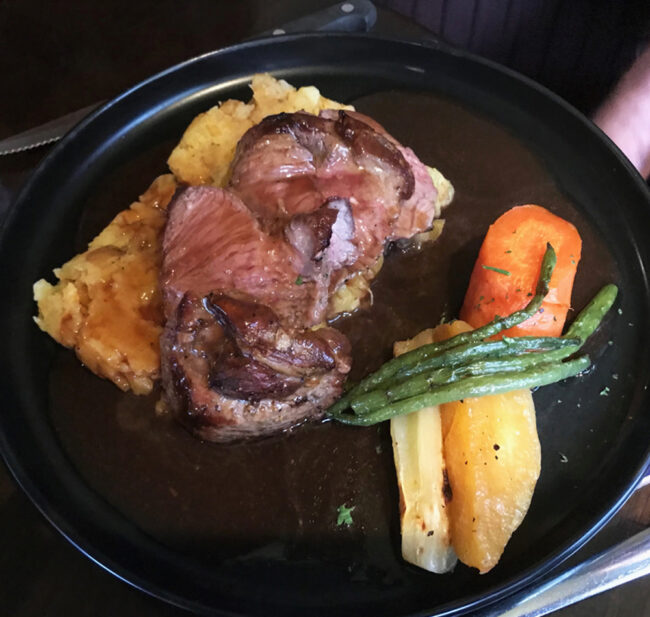 I was determined to try haggis before we left Scotland. I cheated a bit here, by ordering chicken stuffed with haggis and smothered in gravy. Haggis is an ancient dish made from a sheep’s heart, liver and lungs, minced and cooked inside the sheep’s stomach. To me, it just tasted like some kind of ground meat. I might have dodged a bullet by choosing a dish that disguised the flavour. 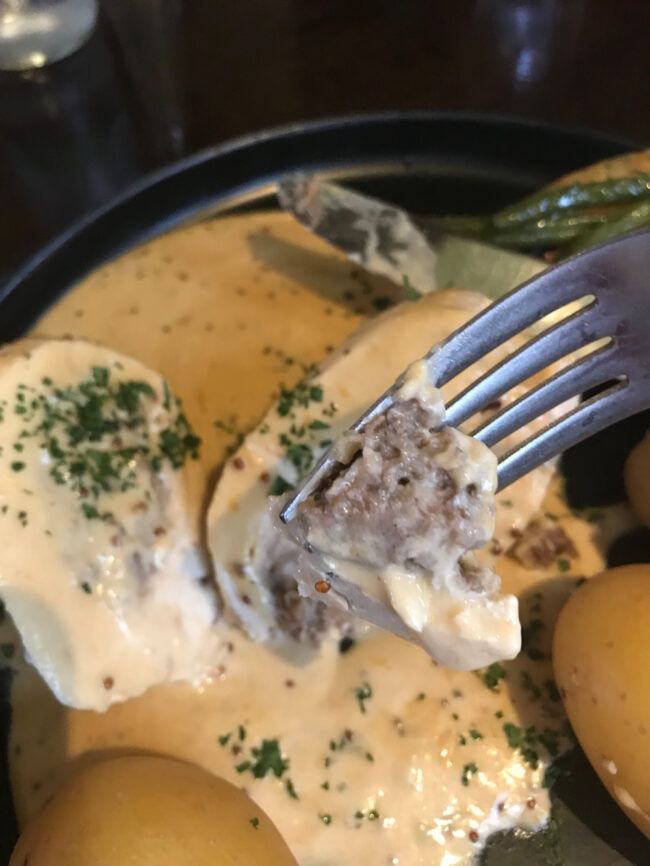 Both of the above dishes were served in the dining room at this wonderful Bed and Breakfast located in Oldmeldrum, about thirty minutes out of Aberdeen. To avoid driving, we caught one of the regular buses that run back and forth to the city. The food was so good that we ate here all three nights that we stayed, and can highly recommend The Redgarth. 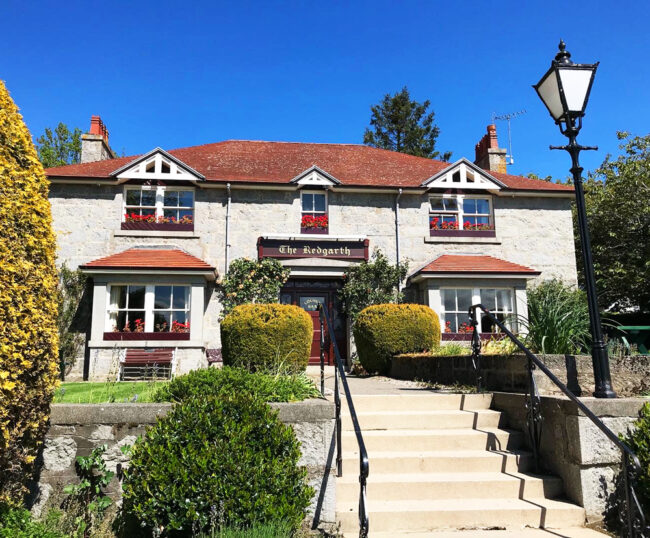 It’s safe to say that the Scots have a sweet tooth, since their desserts are simply loaded with sugar. One of my favourites was Sticky Toffee Pudding — sticky because a thick toffee sauce is poured over a rich sponge cake made with dates. And then a large dollop of ice cream or clotted cream tops it off! Since nothing is ever too sweet for me (my Scottish heritage, perhaps?) I savoured every morsel. 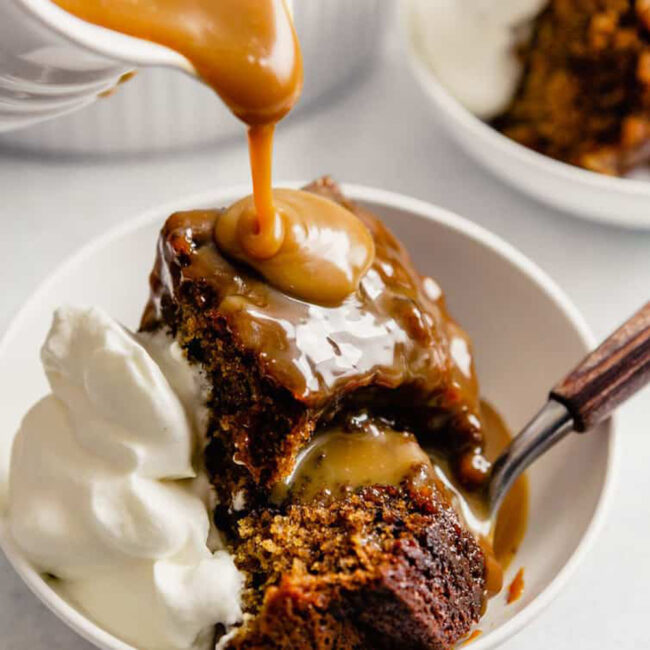 Cranachan was new to me, a sort of trifle made from layers of raspberries, oats, heather honey, cream and whisky. (Note that the Scots spell whisky without an E). It’s unlikely anyone outside the country can reproduce this dessert quite accurately, since it requires all those ingredients with flavours found only in Scotland. Again, this was very sweet and very rich. And served with a piece of Scottish shortbread on the side! 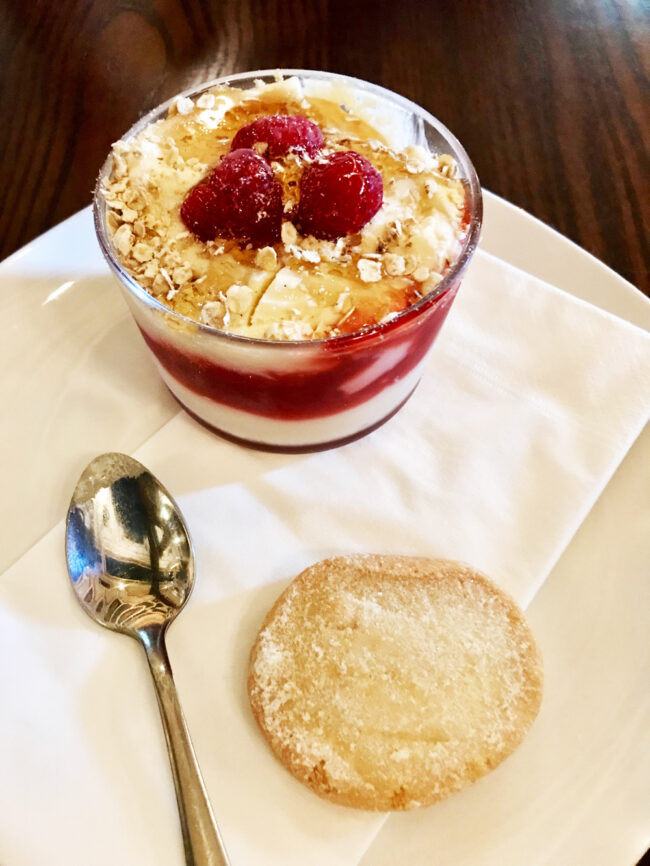 Tablet is nothing more than fudge — but how delicious it is! Unlike the gooey commercial product found in Canada, this tastes like homemade fudge, light and sugary, and breaks off in chunks. Since fudge is practically my favourite thing to eat in the world, you can be assured that I ate more than my fair share of tablet. 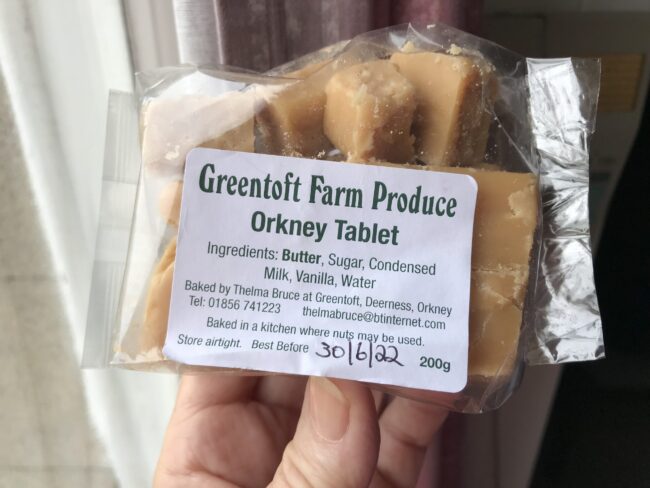 Pronounced to rhyme with “stones,” scones are available in every coffee shop and restaurant, and they usually come in three forms: plain, fruit (berries or raisins), or cheese (and plenty of it). And they are topped with both jam AND clotted cream. There’s a difference of opinion among Scots: which goes on first, the jam or the cream? I ate SO many scones — they make a delicious mid-afternoon snack with a pot of tea on the side — but I still can’t decide if I prefer jam or cream on top. 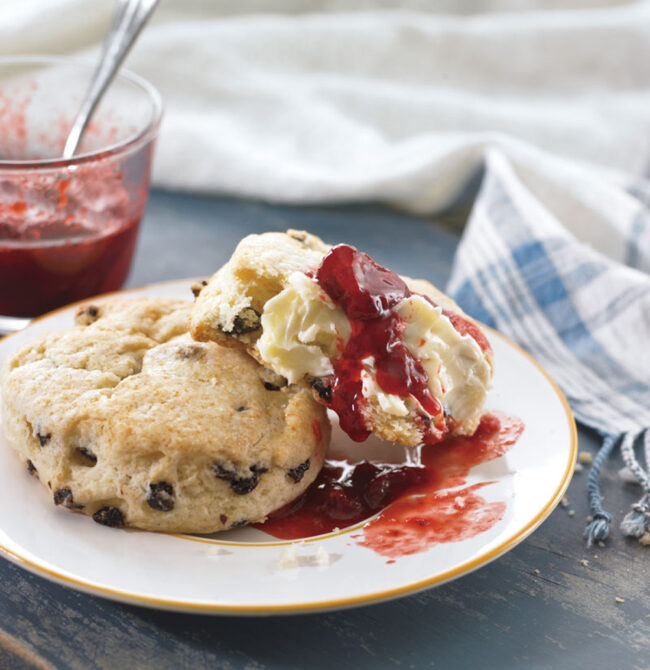 Friends, this is just a small sample of the wonderful food we relished in Scotland. Next month, I’ll bring you some of our travel highlights, which I hope you will enjoy whether you have been to Scotland or are planning to travel there. We will definitely Haste Bach, as they say in bonny Scotland, hopefully sometime soon!