Thousands of our furry and feathered friends performed valuable work during the war, while others simply provided love and comfort to servicemen while they were far from home, diverting their minds from the horrors of war.

Beginning with one of the cutest photographs in history, Corporal Edward Burckhardt poses with the kitten that he said “captured” him on the battlefield of Iwo Jima.

(This photo appeared in a book titled Buddies: Men, Dogs and World War II, by L. Douglas Keeney, published in 2001.) 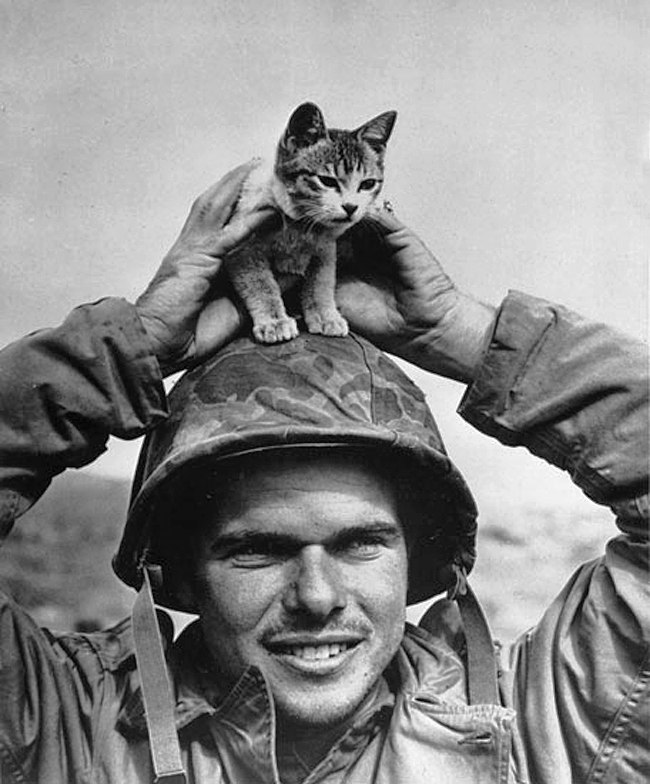 Straddle, the 422 Squadron RCAF mascot, takes the co-pilot’s seat in a Short Sunderland flying boat that flew on coastal and submarine patrols. Straddle went on a number of operations with the crew, and his favourite place was the navigator’s table.

A French patrol with a Saint Bernard make their way through a beautiful snowy valley in France, in February 1940. No doubt a St. Bernard was a handy thing to have along on a winter expedition. 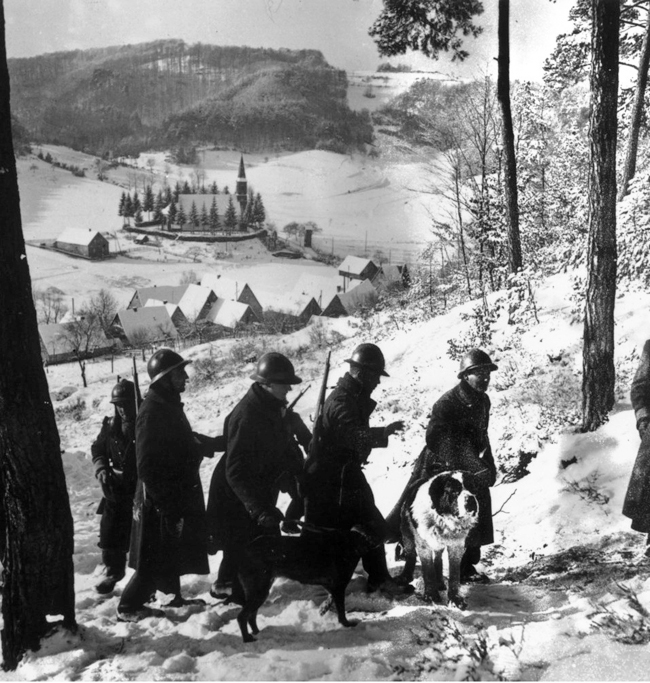 There’s no information available about this photograph, but you’ll note how intently the kitten is watching the soldier take aim! It’s an incongruous combination, the cute kitten and the deadly weapon. 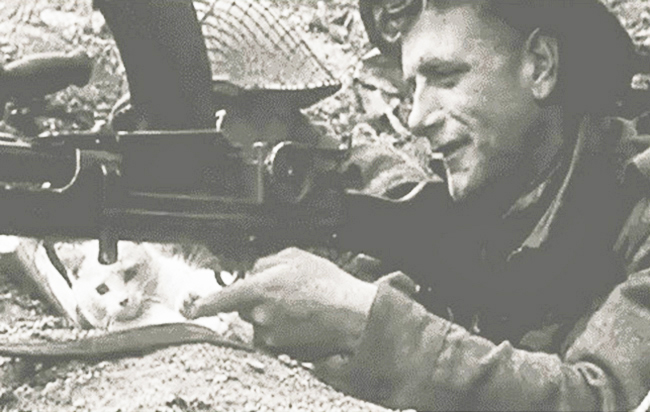 American pilot Robert W. Biesecker and his crew posed on October 18, 1943 with not one, but TWO mascots. The pilot is holding a dog named Scrappy, and the guy on his left is holding a monkey named Joe! We may have heard about Squadron Dogs, but Squadron Monkeys? 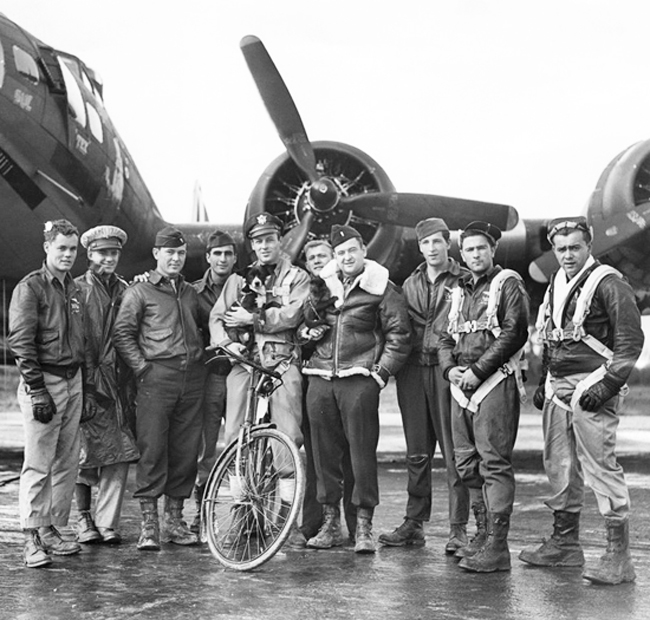 This life jacket-wearing spaniel is Butch O’Brien, a spaniel mascot of the U.S. navy, on board his ship in the Sea of Japan, taken in 1944. 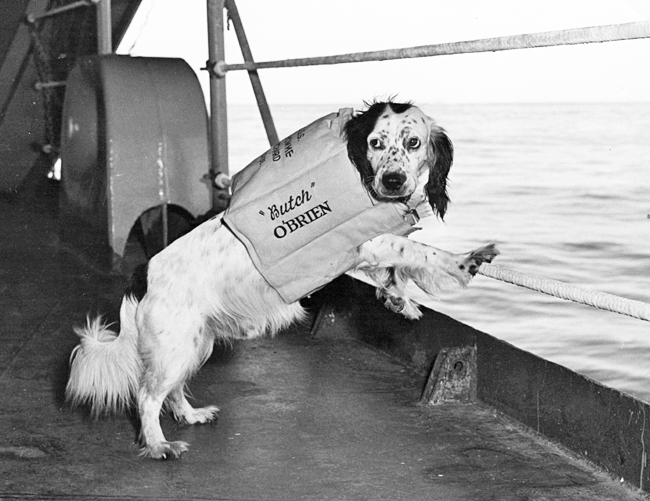 Judy, an English pointer, was truly a war hero. A ship’s dog on board the HMS Grasshopper, she helped save the lives of servicemen after the Grasshopper was sunk. She then spent three years in Japanese prisoner-of-war camps, narrowly escaping death many times. She was the only dog to be registered as a Second World War Prisoner of War.

Judy was awarded a Dickin Medal for her heroism. The Dickin Medal was instituted in the United Kingdom in 1943 to recognize the work of animals at war. Fifty-four animals have received the medal, including 32 pigeons, 18 dogs and three horses. 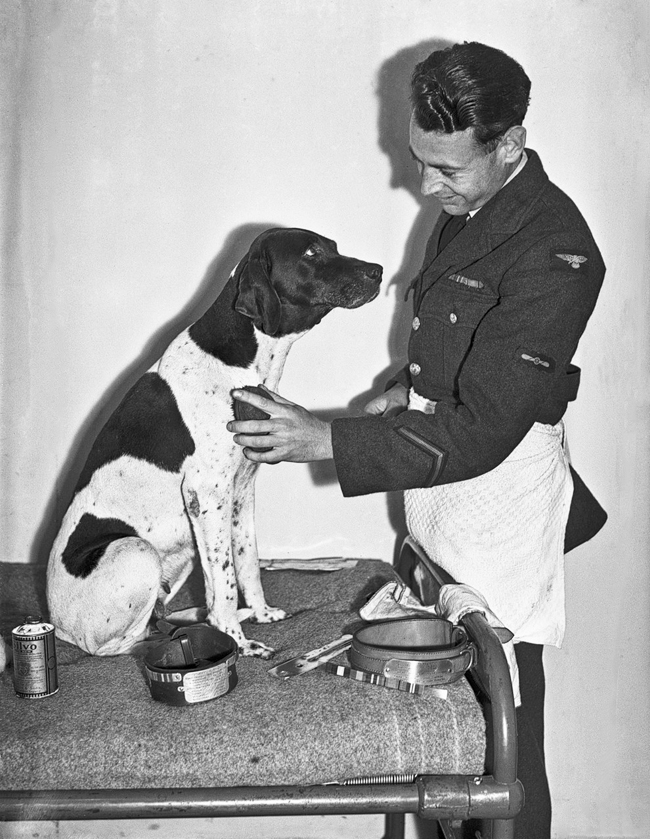 Oleg of the Glacier, a Samoyed, on a 1941 patrol with one of the Canadian soldiers who adopted him as a mascot. 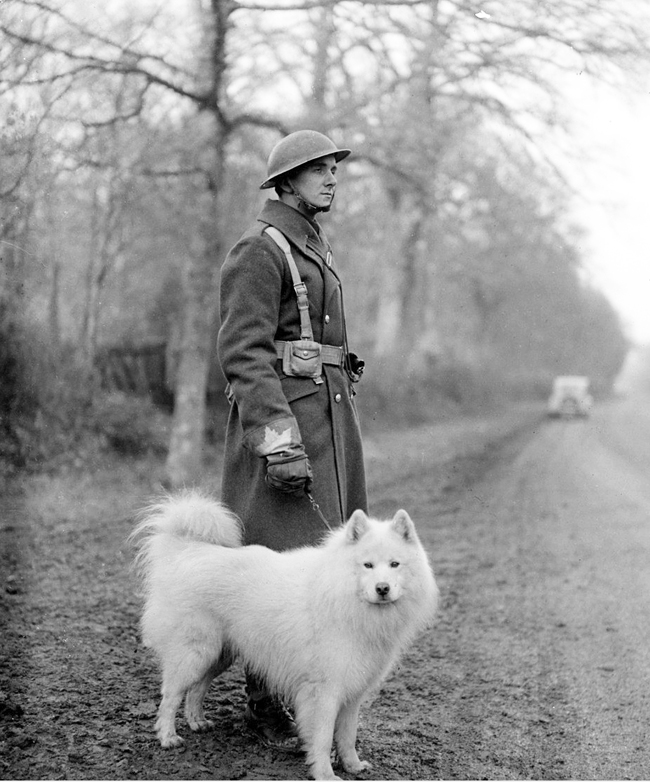 Hoy was the dog mascot of a minesweeper HMS Bangor. Here he is being held by a member of the crew on May 1, 1941. 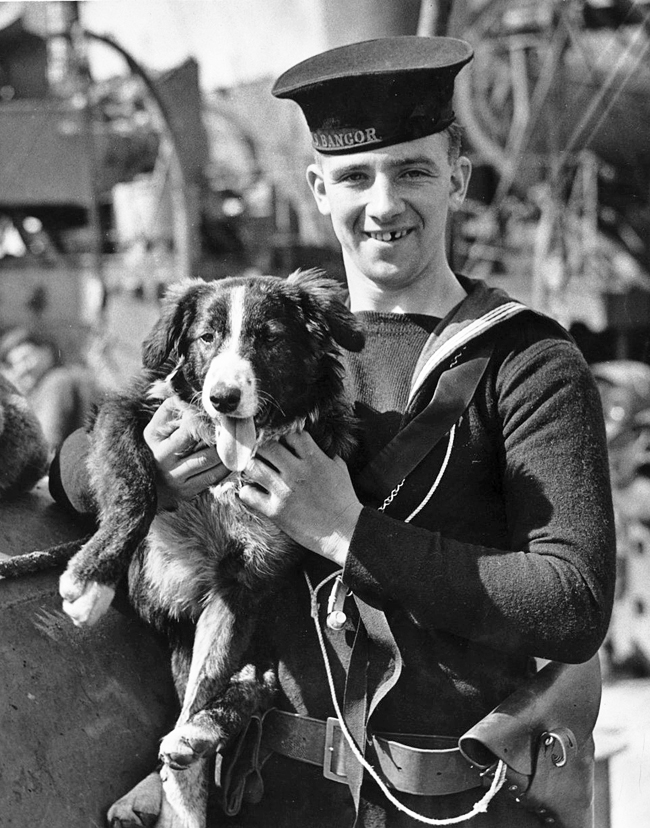 Size doesn’t matter when it comes to saving lives. Smoky, a four-pound Yorkshire terrier, was found in the jungle of New Guinea by American soldier Bill Wynne. During the war, Smoky served as a mascot with the U.S. 5th Air Force in the Pacific. Surviving a parachute jump, air raids, living in primitive conditions and through combat missions, Smoky was awarded eight battle stars for her bravery and devotion. She has six memorials dedicated in her honour. 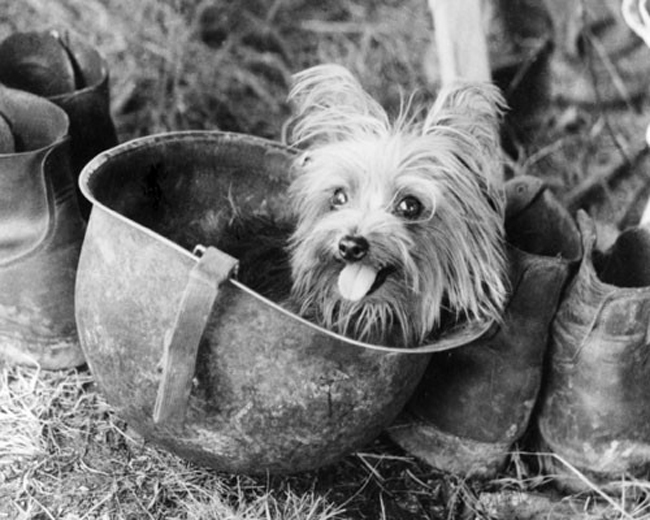 While these British anti-aircraft gunners scan the sky for incoming enemy planes, it looks like the dog is keeping watch as well. 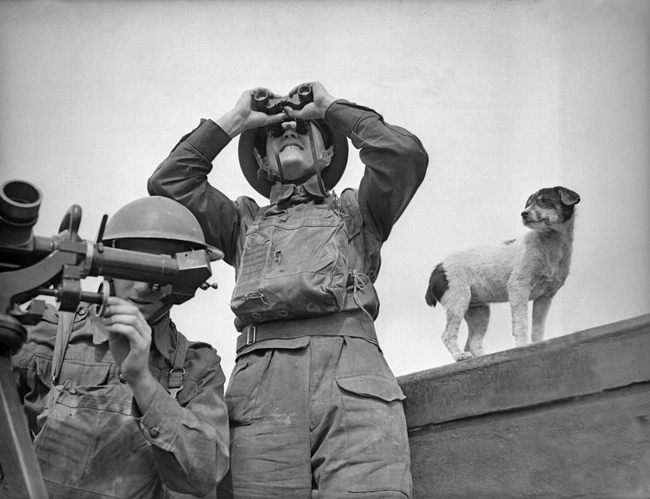 Sergeant Stubby has been called the most decorated war dog of World War One. He’s the only dog to be nominated for rank and then promoted to sergeant. He was the official mascot of the 102nd Infantry assigned to the 26th Yankee Division. Stubby participated in seventeen battles on the Western Front. He saved his regiment from surprise mustard gas attacks, found and comforted the wounded, and once caught a German soldier by the seat of his pants, holding him there until American soldiers found him! 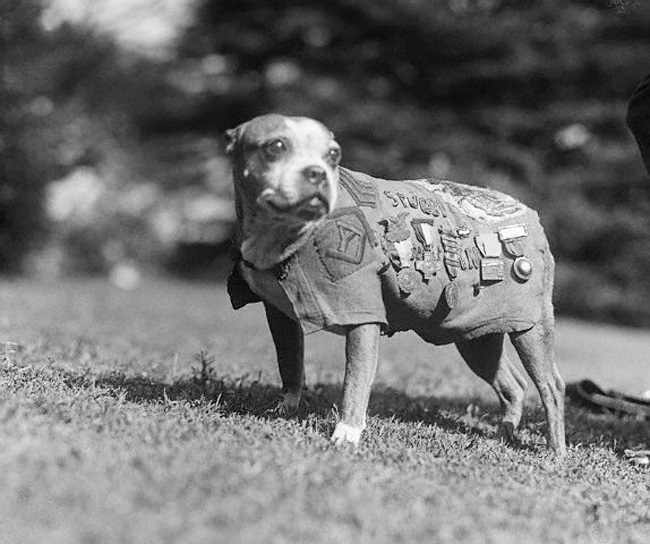 Coupie, the canine mascot of a squadron in the Allied Expeditionary Air Force, used to visit each aircraft and pilot before take-off. Here he is lending moral support to one of the pilots on April 24, 1944. 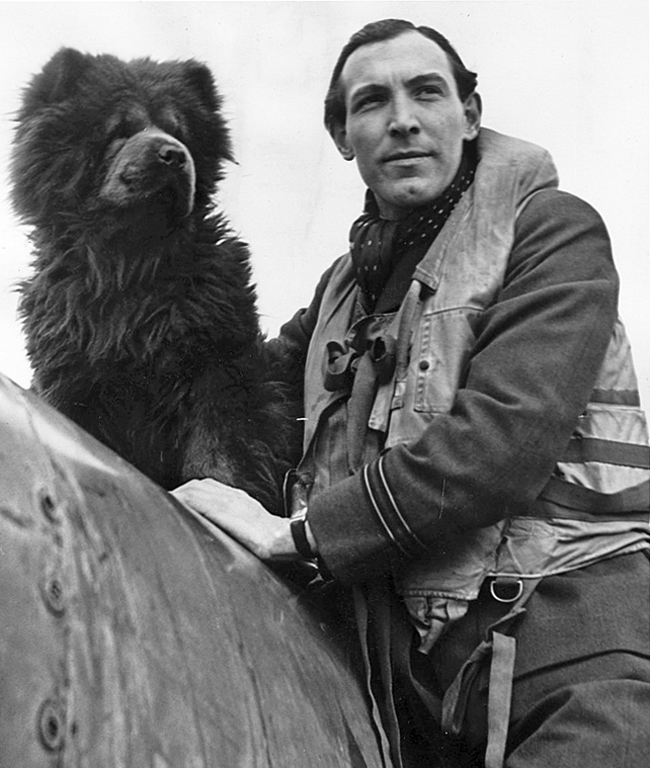 During World War Two, the United Kingdom used about 250,000 homing pigeons to send messages across enemy lines. The Dickin Medal, the highest possible decoration for valor given to animals, was awarded to 32 pigeons, including G.I. Joe, of the United States Army Pigeon Service; and the Irish pigeon Paddy. Here a member of the crew of an RAF Coastal Command Lockheed Hudson holds a carrier pigeon in 1942. 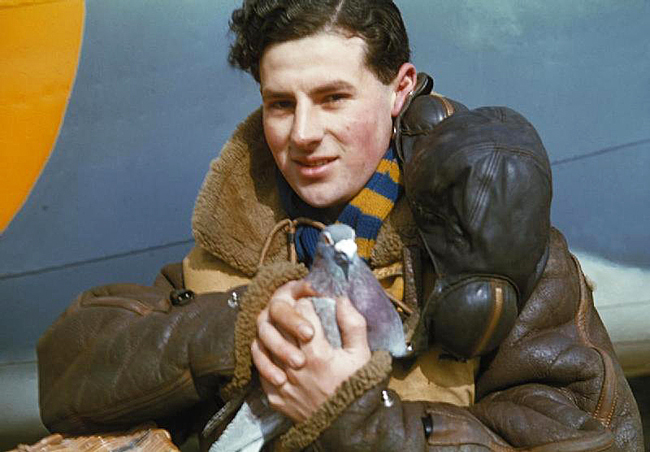 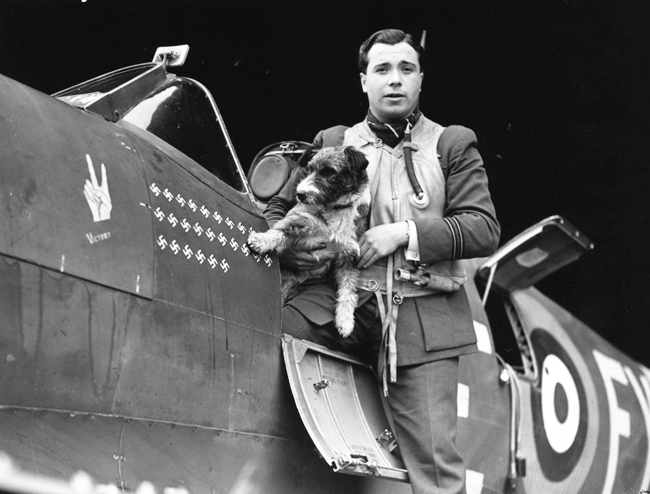 Canadian spectators cheer at a baseball game between the United States Army and the Canadian forces, at Wembley stadium in London, on August 8, 1944. Their canine companion is also enjoying the spectacle.

Gracie Fields hands out tea to the troops in a village near Valenciennes in northern France, on April 26, 1940. One soldier is carrying yet another pet monkey on his shoulder! 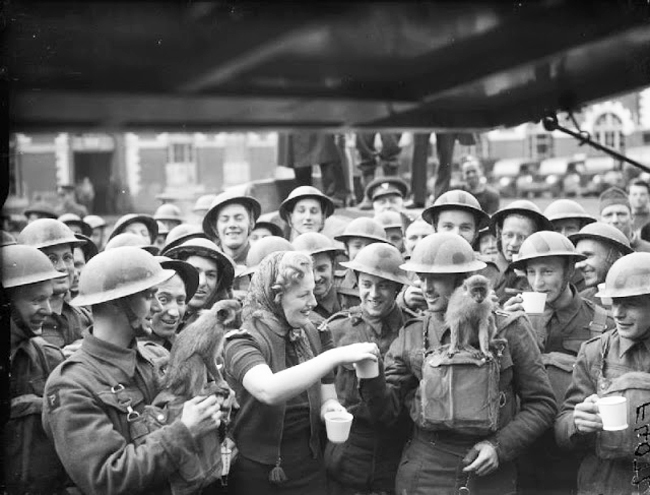 This Royal Air Force pilot enjoys the company of a little tabby kitten, just hanging around. 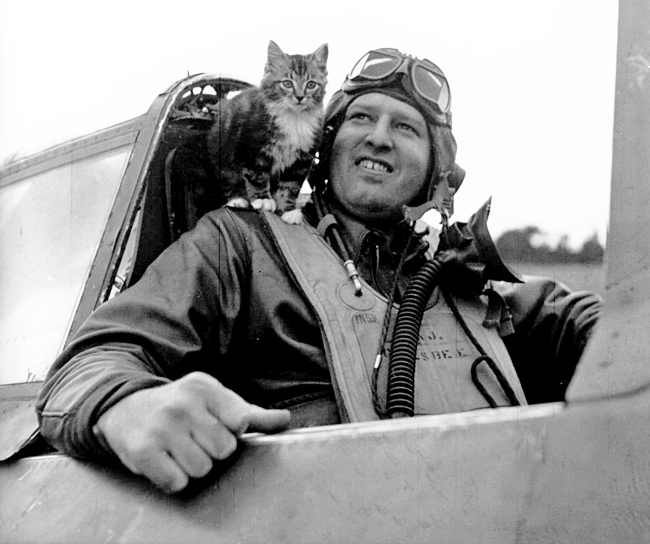 This is the English bulldog mascot of a regiment from Quebec based in England. He looks quite at home on the seat of the motorcycle in this photo taken October 11, 1941. 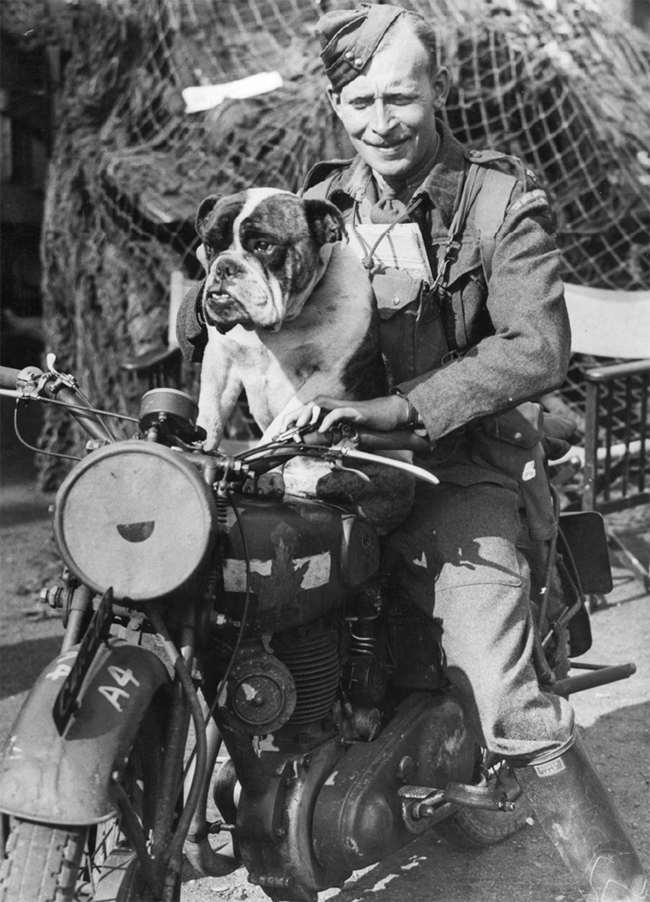 Another bulldog named Venus was the sassy mascot of the Royal Navy destroyer HMS Vansittart. 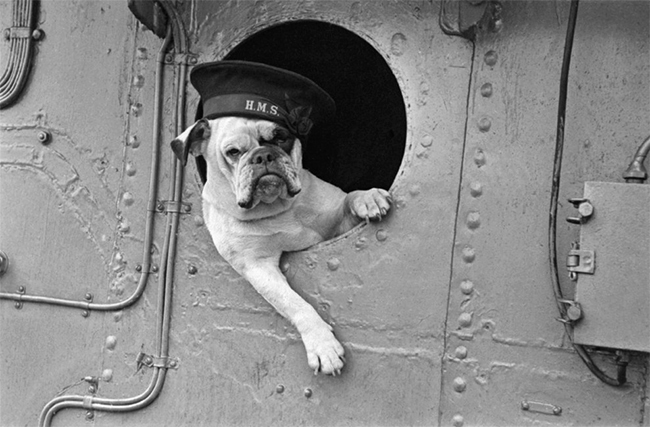 It wasn’t all dogs and cats and monkeys and pigeons. A Royal Air Force squadron adopted a lamb as a mascot, and named him Aloysius. The lamb and one of the sergeants quickly became best friends. Here he is feeding Aloysius from a bottle on December 18, 1939. 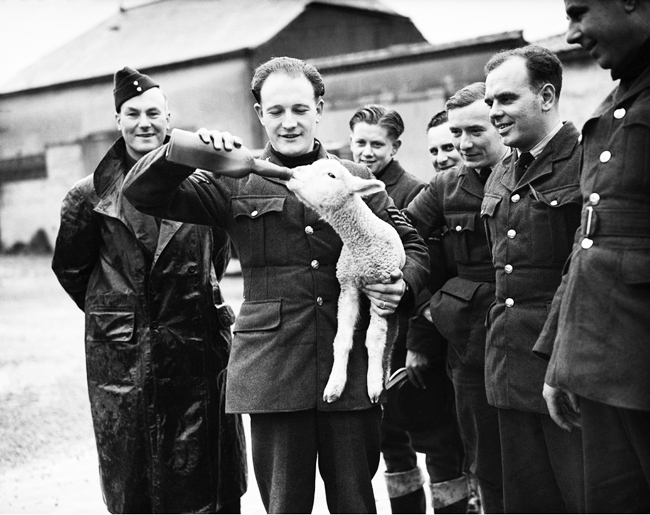 The Star Weekly was a Canadian newsmagazine published by the Toronto Star. During the Second World War, a colour illustration with a wartime theme appeared on the cover each week. Nothing could be more symbolic of British tenacity than the British bulldog. Here’s an image showing the bulldog tearing apart the Nazi flag. To see my entire collection of Star Weekly covers, click: Star Weekly At War. 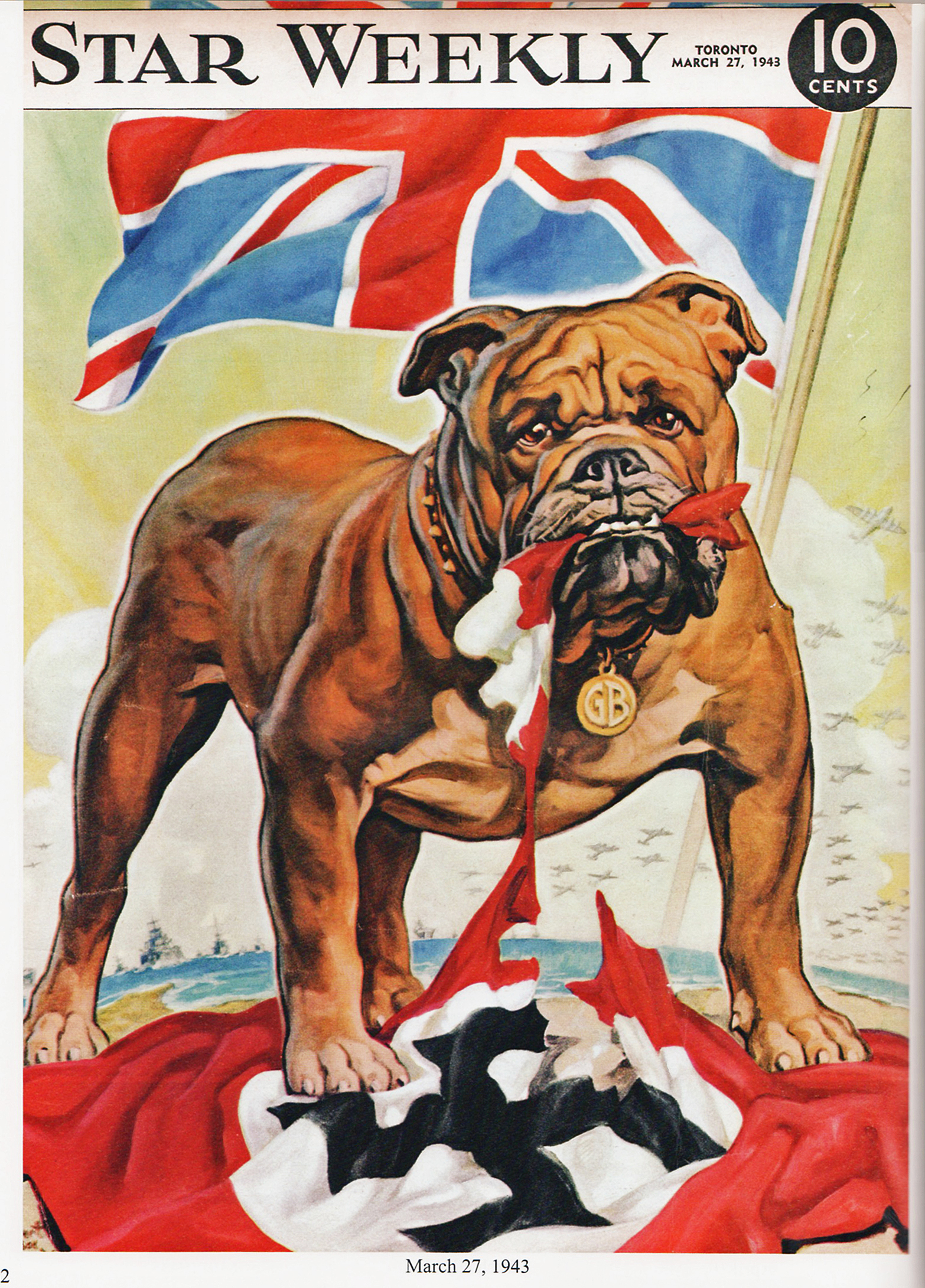