Wartime knitting was more than a hobby – it was an act of patriotism. Literally millions of women, children and even men in Allied countries used their knitting needles as weapons of war. If you weren’t a knitter, you might as well have been a Nazi! 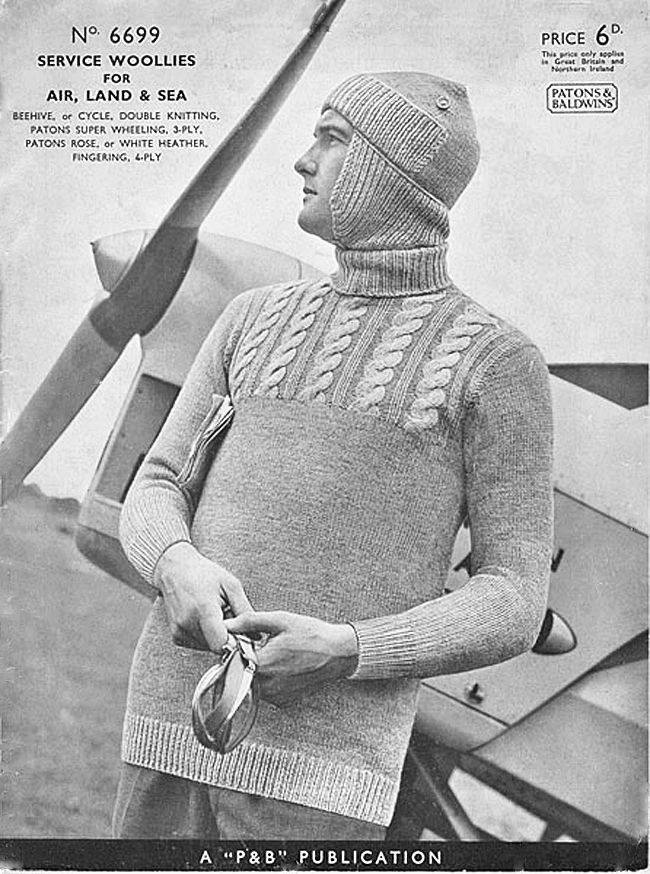 Countless knitted items were created and sent to the Allied forces in World War Two. And they were put to good use, especially in the days before synthetic fabrics.

To prevent a ghastly condition called trench foot, which could cause amputation or even death, armies needed frequent changes of dry socks, and that required a LOT of socks. Not only socks but sweaters, vests, gloves, balaclavas and scarves were produced by the ton.

Although it doesn’t say so on the cover, this book of patterns for Service Woollies contains everything from caps to wear under helmets, to something called “Amputation Covers,” a chilling reminder of the hideous wounds being treated overseas. 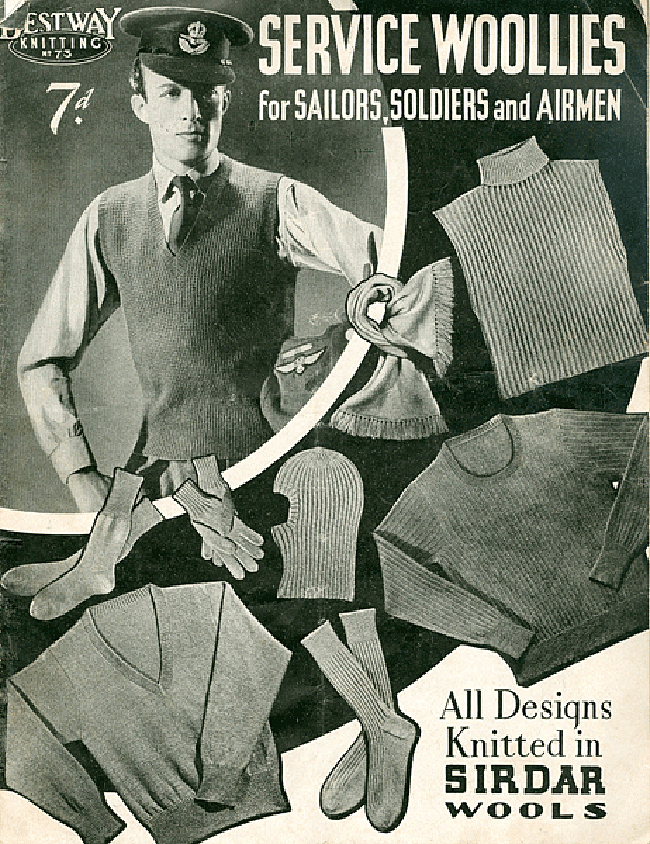 Our sailors in the North Atlantic were especially vulnerable, and they needed special sea boot stockings worn over the socks and inside their long leather sea boots. The cuff of the stocking was folded over the top of the boot. Here’s an ad from my favourite wartime magazine, The Star Weekly, showing what items were especially appreciated by sailors. 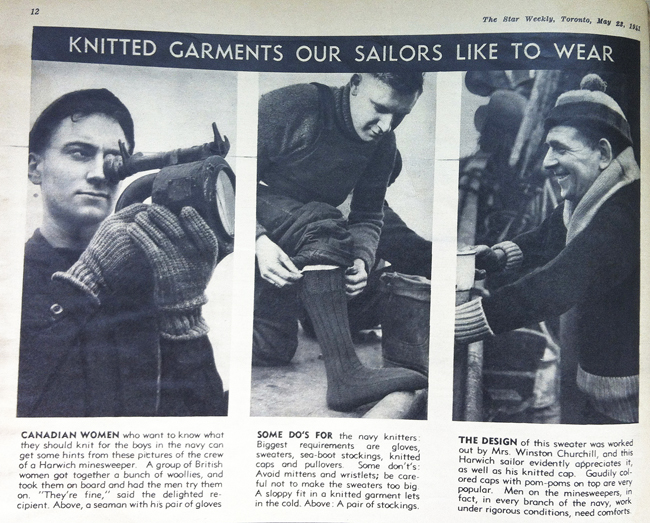 Members of the air force, of course, needed extra layers for those long, cold bombing runs over Europe in aircraft where the temperatures dropped below freezing.

This airman in the photo at the very top of the page looks particularly dashing in a sweater with a built-in woolen helmet. (My RCAF veteran father Douglas Florence told me that if you were allergic to wool, as he was, you suffered in silence. He spent his entire service career scratching!)

Servicewomen, too, liked to keep warm while they looked their best in natty fitted sweaters and cute caps. There’s even a one-piece woollen teddy! 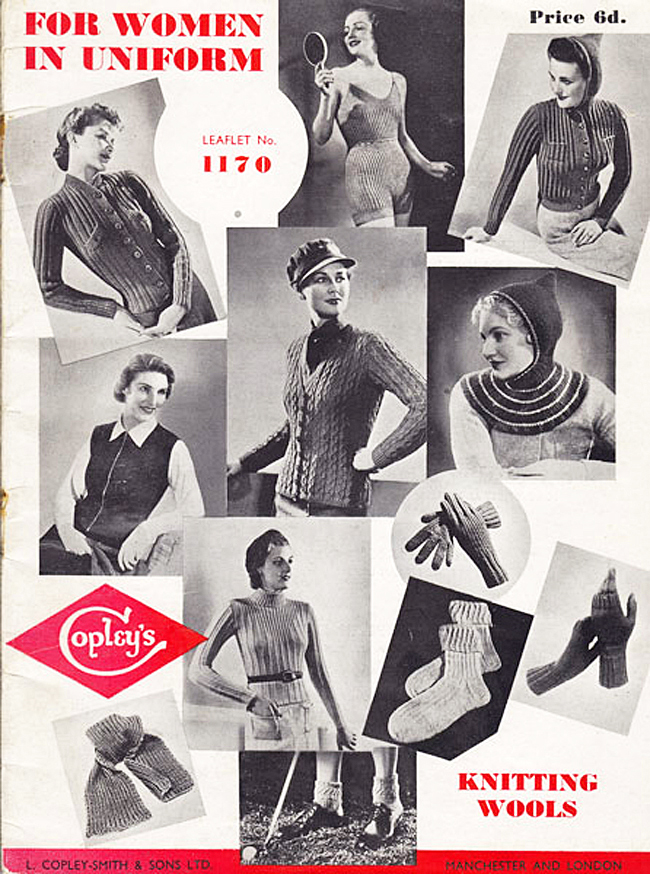 In case you feel moved to imitate those dauntless knitters, here’s a pattern for Service Socks issued by a company in Listowel, Ontario. 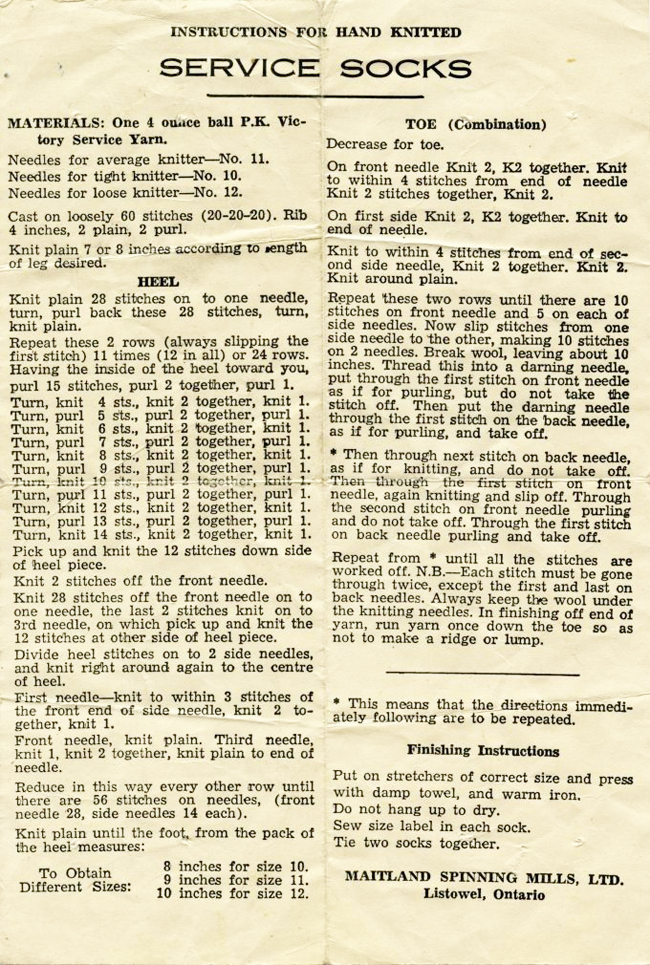 So who were all these knitters? Practically everyone.

Those were stressful times for the folks on the home front, and knitting was a great way to relieve the anxiety of waiting for a letter from your loved one, the fear that – heaven forbid – the war might go on for another ten years, or even worse, the horrifying concept that our side would lose!

This patriotic American poster uses a play on words to remind people that knitting was one way to defeat the enemy! 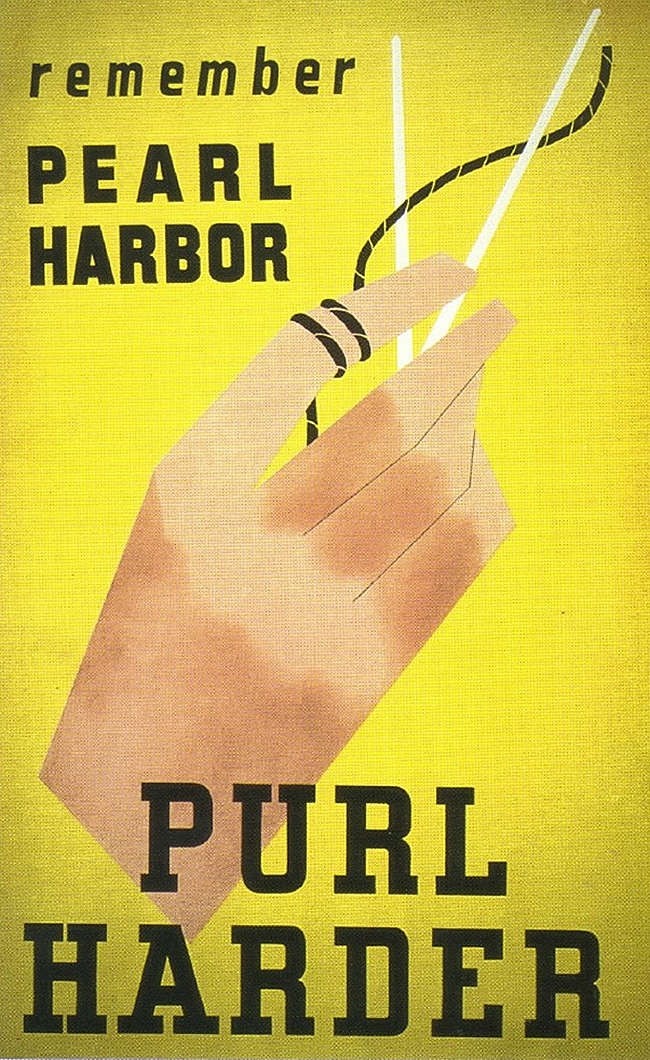 Many groups offered classes for beginners. Here’s a nurse showing some young matrons how to knit, while they huddled in a London bomb shelter – their babies carefully lined up on an overhead shelf! 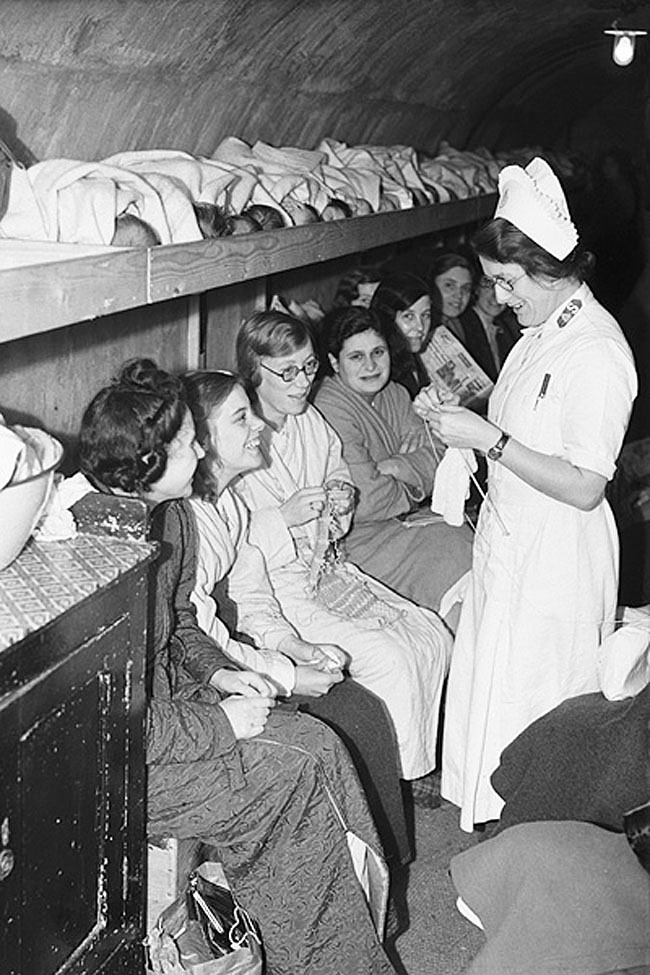 In Canada, all knitting was collected and distributed by the Canadian Red Cross. Groups such as the Imperial Order of the Daughters of the Empire, Women’s Institutes, church committees, and countless numbers of smaller women’s organizations hosted knitting bees, knitting teas and knitting showers. And Canadians could also mail knitted items directly to their own sons and husbands.

My mother June Light in Battleford, Saskatchewan formed her own group of girls who knit socks. They wrote little notes of encouragement to tuck inside – “Good luck, boys!” and the like.

At the beginning of the war, people just weren’t very good at knitting! The Red Cross hired a Mrs. Brown (also known as Mrs. Fix-It) to ensure quality control, particularly for removing knotted yarn inside the sock, and for checking to see that the toes had been grafted properly. (Grafting means closing up the sock toes with excess yarn and a darning needle. Untidy stitching would leave an uncomfortable ridge, while knots could irritate and produce blisters.)

If she found mistakes, Mrs. Brown would just rip them out and start again. She maintained that she could repair about 200 pairs a week!

It wasn’t just women who learned how to knit. Prisoners in penitentiaries and patients in mental hospitals were taught to knit. And children were not exempt from the knitting craze. Here’s a little ditty I found in a knitting magazine:

What can we do in this struggle

To conquer the savage Hun?

Those things are out of the question,

But each can be doing a bit;

And we are helping our soldiers

When a warm grey sock we knit. 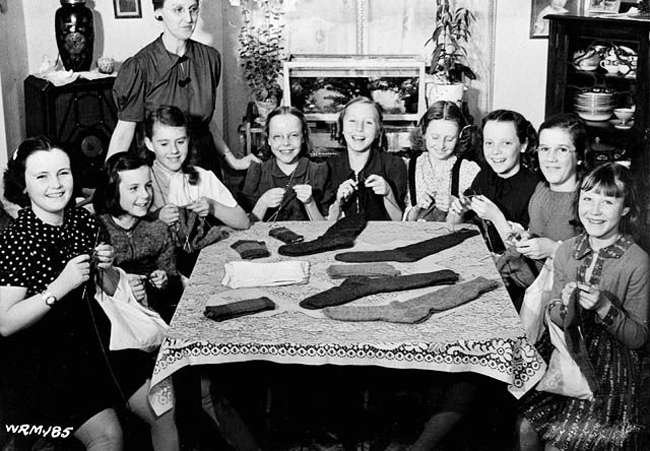 Even very young children learned to knit. Here’s a photo of two British boys who barely look old enough to handle needles without putting an eye out.

(Kids did a lot to help the war effort. To read more, click: Children on the Home Front.) 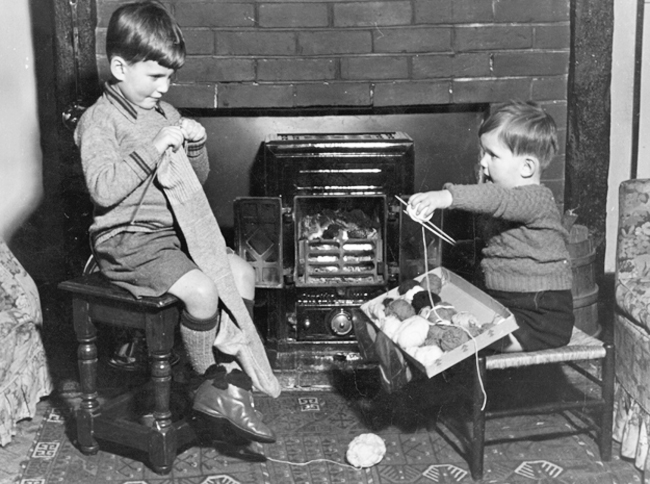 While their shattered bodies and broken limbs knit back together, wounded servicemen in hospitals were taught to knit. This was probably pretty therapeutic, too.

(I wrote another column about how my grandfather learned to embroider in a British hospital after he was wounded in World War One. To read it, click: Brotherly Love). 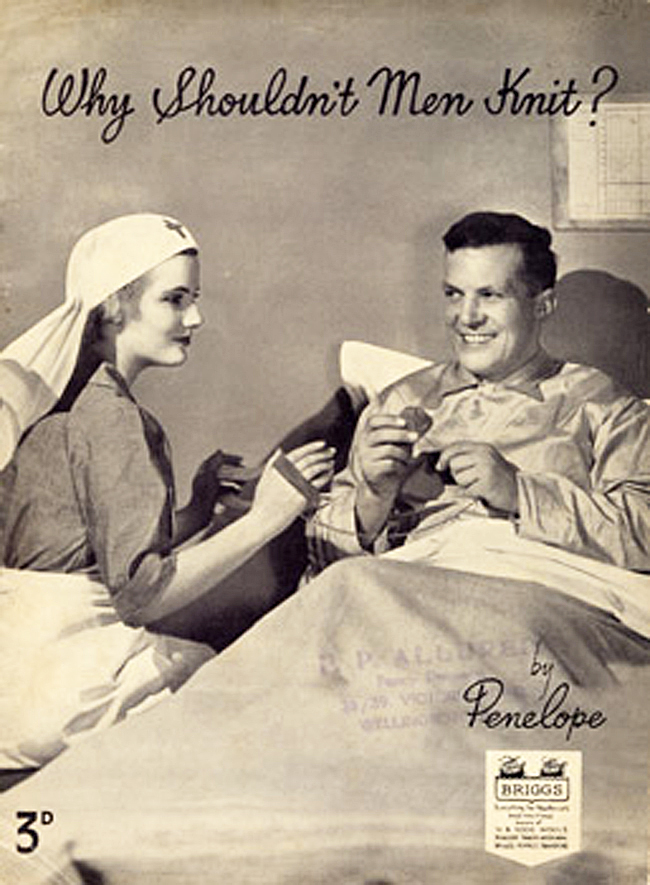 War workers knit while they waited – emergency workers, bus drivers and London cabbies like the one here, photographed for Life magazine in 1939 by Carl Mydans. 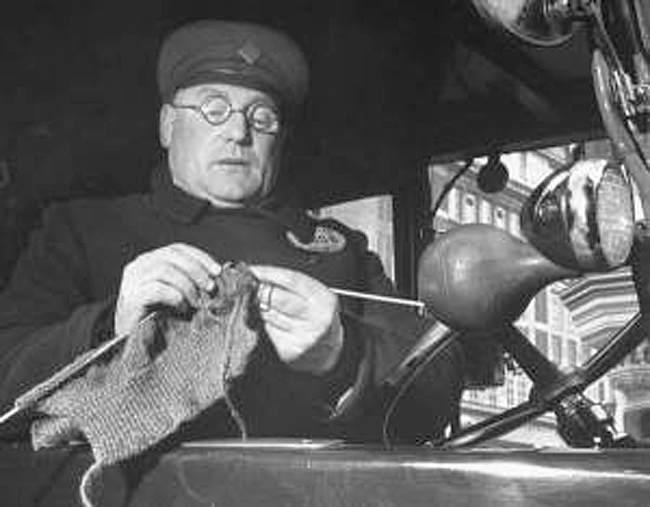 Even the royal family took up knitting. Well, I don’t know about King George, but certainly Queen Elizabeth and her two daughters Elizabeth and Margaret Rose knit for their troops. 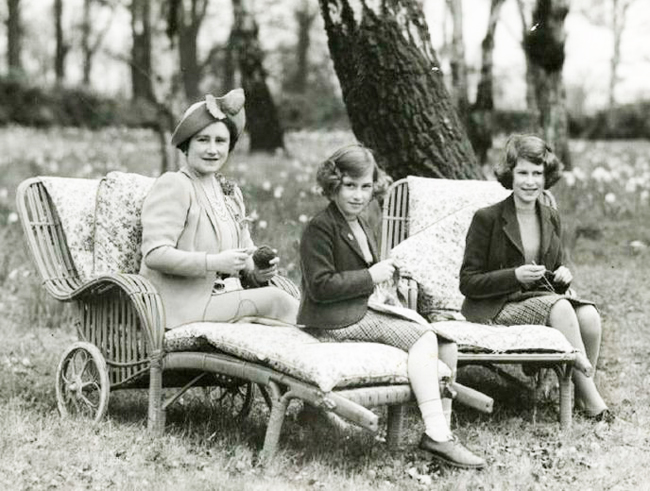 And now here is a great little “yarn” from my friend Lori Fontaine, formerly of Montreal but now residing in Radium, British Columbia.

My mother’s family lived in a small town about seventy kilometres south of Montreal called Noyan, Quebec. My great-grandmother Lena’s brother Wyatt was killed in France during World War One, and his name was carried through the family in remembrance.

Whenever I visited my grandmother’s house, at bedtime, I not only said prayers for my family to be blessed, but it was customary in that house to lay a hand on one’s heart and bless “Our Queen.”

Here’s a photo of the house where my mother was raised. (Note the dog in the yard, and the arrow on the telephone pole pointing to Montreal). 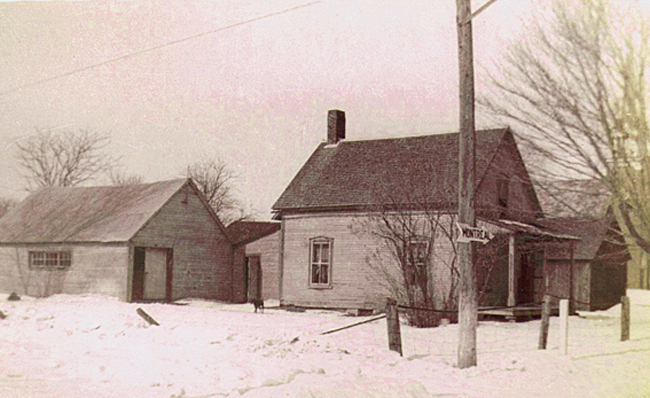 During World War Two the house was a hive of activity at all times. The garden wasn’t huge, but it fed everyone in the family along with anyone in need. Inez Blinn told me that my grandmother Mildred Derick kept her alive during the war. Inez was in her first teaching job, renting a room, and convinced that my grandmother was sent from heaven.

My grandmother cared for the house and garden and kept order among five of her own children, as well as local kids who seemed to be always at the house (probably to enjoy some of her wonderful food!) The house is located beside St. Thomas Anglican Church, where my grandfather Herman Derick was caretaker.

Now here is the knitting story. My mother Shirley knit during the war while delivering mail in a horse-drawn buggy! She told me that she would deliver the rural mail with her best friend Wanda, so they could enjoy private conversations away from the prying ears of her three brothers! One would have the reins while the other knit away at lightning speed. Here is my mother Shirley on the left, and her friend Wanda on the right. 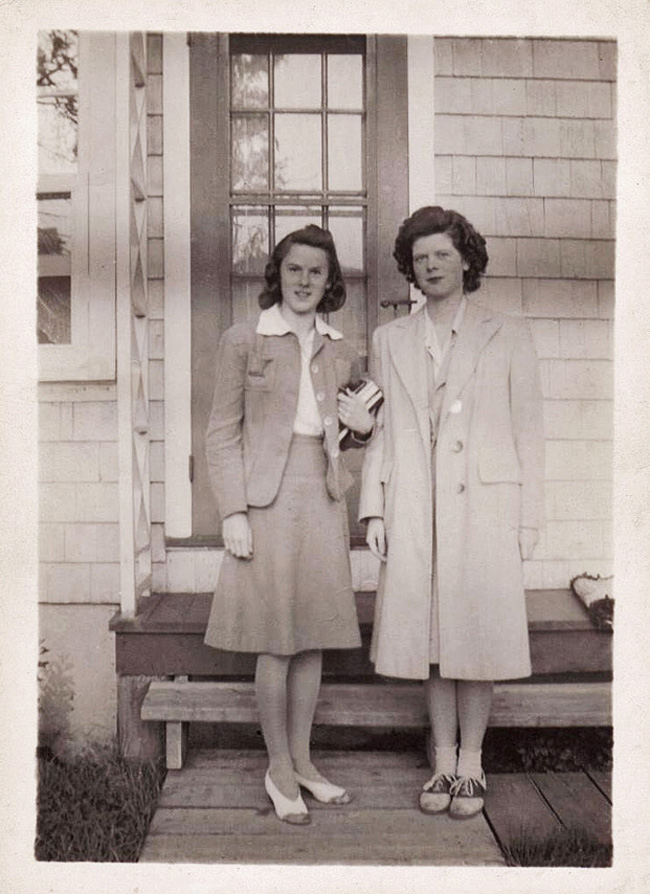 One of the misconceptions of knitting is that it’s a quiet, relaxing pastime. It is now, but during the war, it was so important that a person ALWAYS carried a project and they worked until their fingers were exhausted.

The soldiers NEEDED what was being made, so every stitch meant you were working for a soldier – showing him he was a part of the family. Idle hands were stared at with disdain. In my grandmother’s house, Sunday was a day of reflection, devoted to God. No card games, no racing around the yard playing hide and seek, and no reading other than the Bible or Pilgrim’s Progress.

However, during the war years, knitting was permitted. My Mom’s three younger brothers – Bud, Lorne and Leslie – knit as well. Her sister Lucille was older and dating an airman, so you can imagine the significance every stitch had in that house!

I’m afraid the patterns she used are now lost to time, but she told me that even the youngest children in the one-room schoolhouse were given needles and started out by making garter stitch blocks that would be sewn together into lap blankets. Scarves were VERY important and the need for them during the damp winters in Europe was incredible.

My Mom had a habit (that I carry on to this day), of having an “easy” project such as a scarf that can be grabbed to work on as an example, during a conversation; then another more difficult project (such as socks) for quieter times when more concentration is needed.

Naturally, my Mother took immense pride in the fact that she could knit socks “in her sleep”!!!

Thank you, Lori Fontaine, for that great family memory!

Here’s a story that warm the cockles of your heart. This little green sweater survived the holocaust. 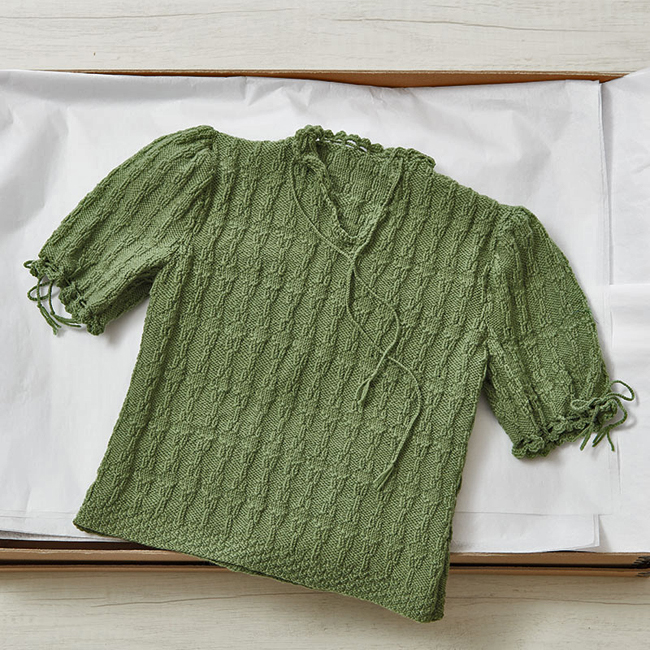 It was knitted for five-year-old Krystyna Chiger by her grandmother in 1941. Two years later, she and her family were forced to hide in the sewers below Lvov, Poland for 14 months to escape Nazi persecution. This sweater was one of her cherished possessions, and one of the few things she was able to take with her during this ordeal. Here’s a photo of little Krystyna. Happily, she and her entire family survived, along with her sweater, which later ended up at the United States Holocaust Memorial Museum in Washington, D.C. 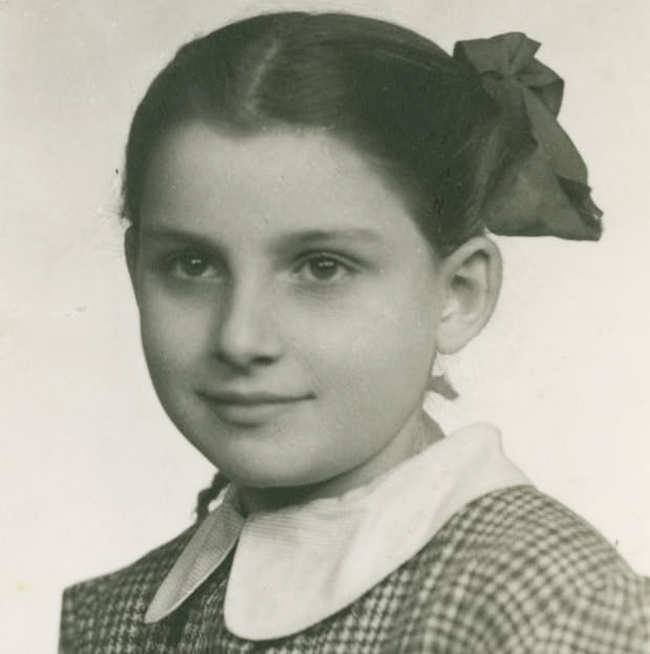 In 2003, an American doctor (and serious knitter) named Lea Stern first saw the green sweater at the museum. She painstakingly recreated the knitting pattern, and it’s now available at the museum gift shop, or by visiting this website: The Little Green Sweater. If you purchase the pattern, you will have the satisfaction of knowing that all the proceeds go to the United States Holocaust Memorial Museum.

Continental-style knitting, which was associated with Germany, fell out of favour in English-speaking countries during World War Two, and people changed to English knitting.

The difference is which hand holds the yarn: the left is Continental, the right is English. Continental knitting is faster and more efficient, so it began to regain popularity after the war. The photo shows the dreaded “German-style” knitting with the yarn being held in the left hand.

I TOLD you knitting was an act of patriotism! 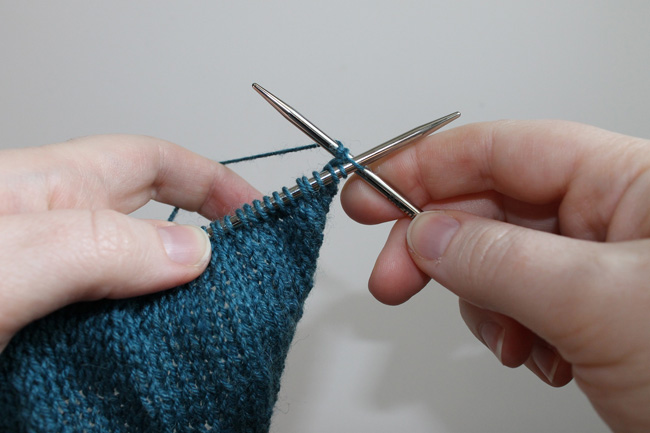 Knitting was just one of the ways that Canadian civilians pitched in to help the troops overseas. Read more by clicking here:

This girl on the cover of the January 11, 1942 issue appears to be pondering which branch of the armed forces holds more appeal. I like to think it’s because she’s planning to join up herself, but that’s probably not what the artist had in mind! The Star Weekly was a Canadian newsmagazine published by the Toronto Star. During the Second World War, a colour illustration with a wartime theme appeared on the cover each week. To see all my Star Weekly covers, click Star Weekly at War. 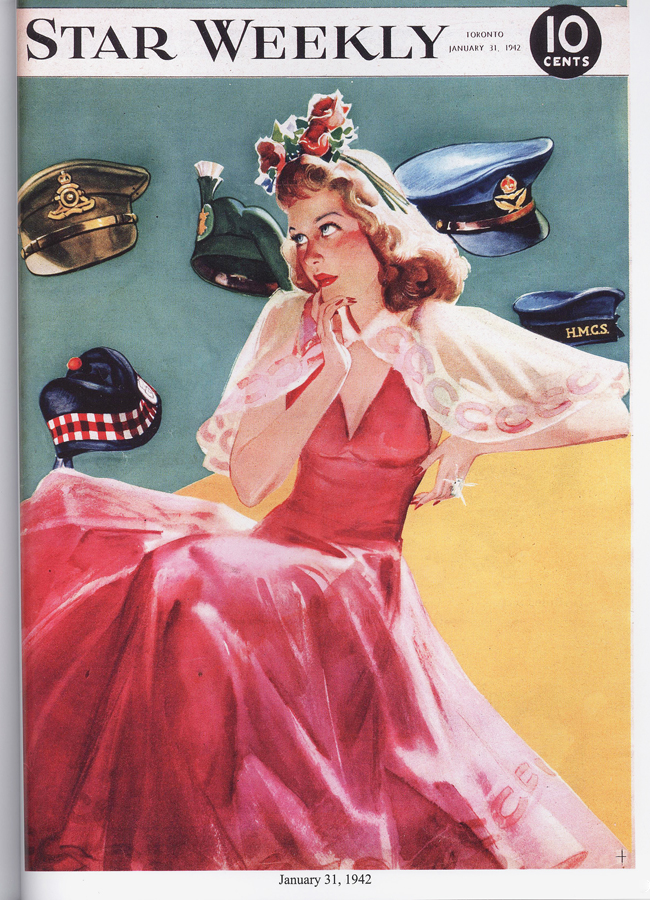