Was there ever a period in history when romance was so exciting, so terrifying, and yet so wonderful as during wartime? The men were so handsome in their uniforms, and the women so desireable. No wonder thousands of passionate love affairs and wartime weddings took place during those heady years. 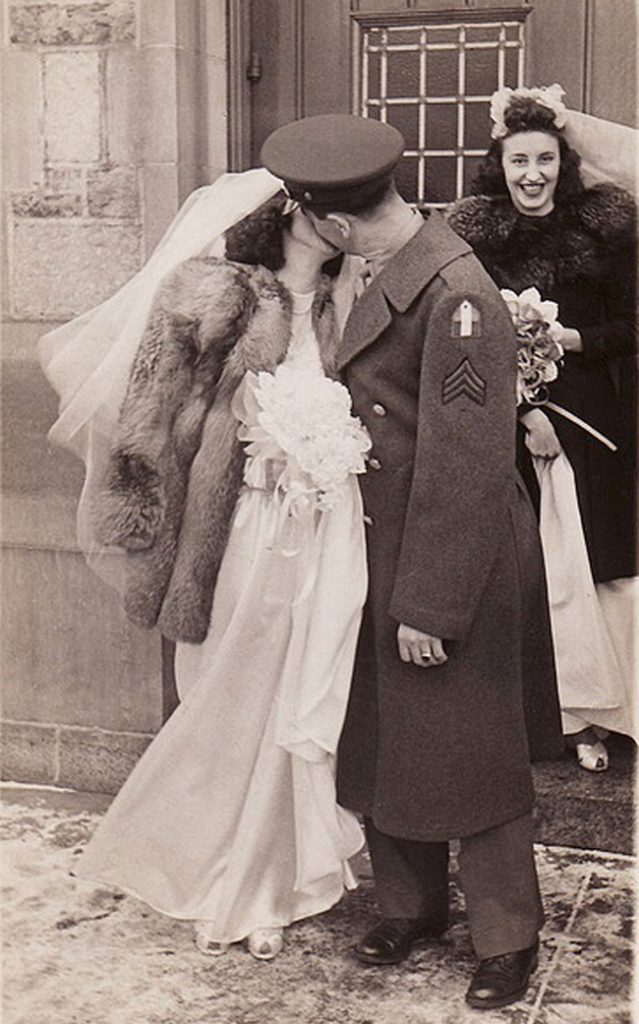 Here are photographs of some lovely wartime weddings, just in time for Valentine’s Day. I have included all the information I could find about them, but some couples are unidentified.

This elaborate wedding, with matching bridesmaid dresses, took place in Sydney, Australia between Sam White and Jean Davidson. Sam was on leave from the HMAS Parramatta. His sister Ella White was the bridesmaid in blue. 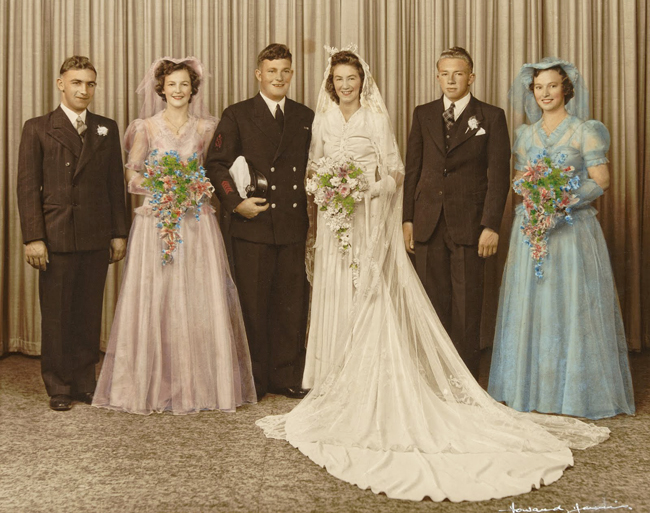 This couple who married in Leeds, England is unidentified, but I love the bride’s shy smile and her huge bouquet of roses. 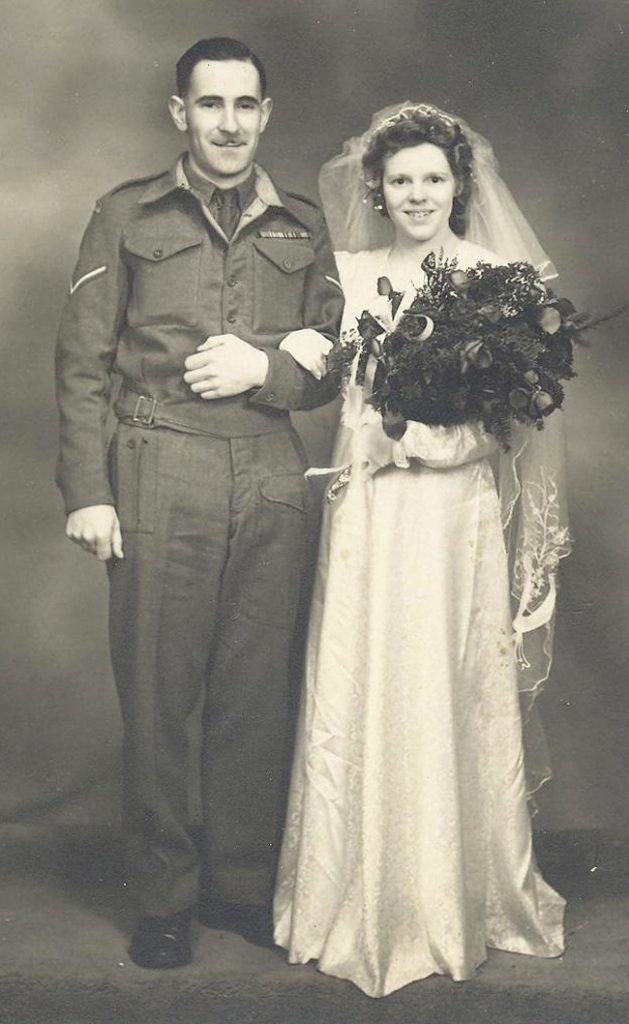 It wasn’t only grooms who were in uniform! Ernie and Joan Howe of Cambridgeshire, England were both in the armed forces when they married on October 3, 1942. 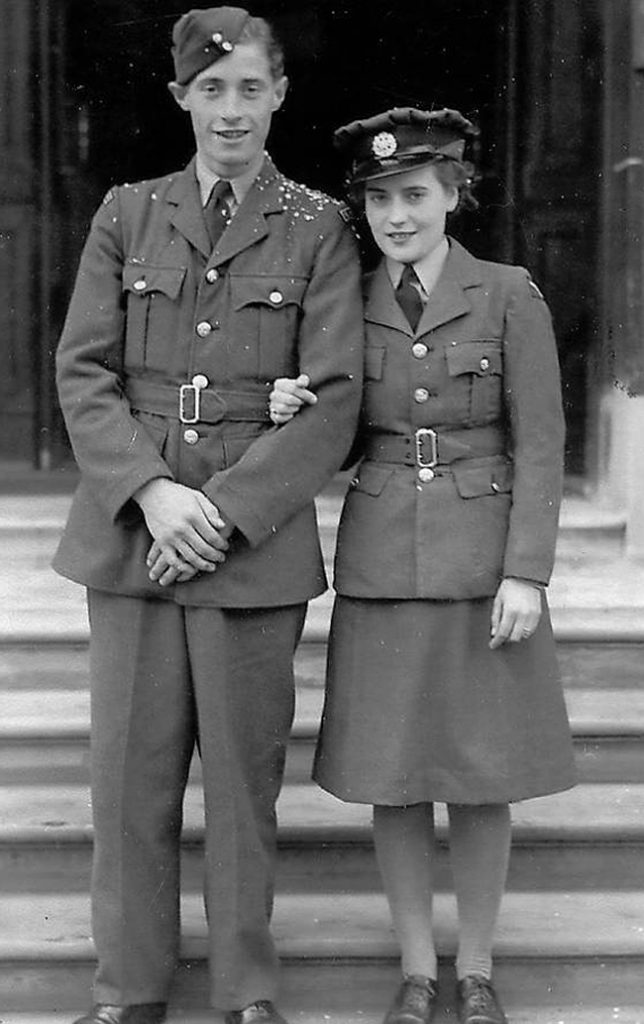 A pretty bride in a ruffled organdy gown with huge sleeves, a three-tiered wedding cake and a handsome groom made this wartime wedding especially beautiful. 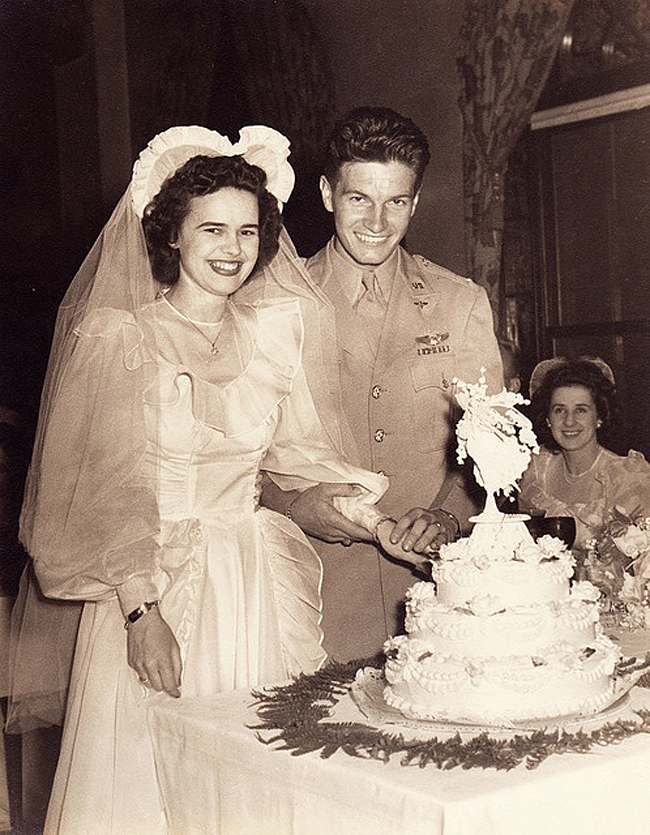 Rose Boulay became a war bride when she married Horace Boulay of Belledune, New Brunswick. She was one of 43,000 British women who married Canadian men during the war. This photo can be found on the Canadian War Brides Facebook Page. Melynda Jarratt of Fredericton, N.B. is the leading war bride expert who has written books on the subject. 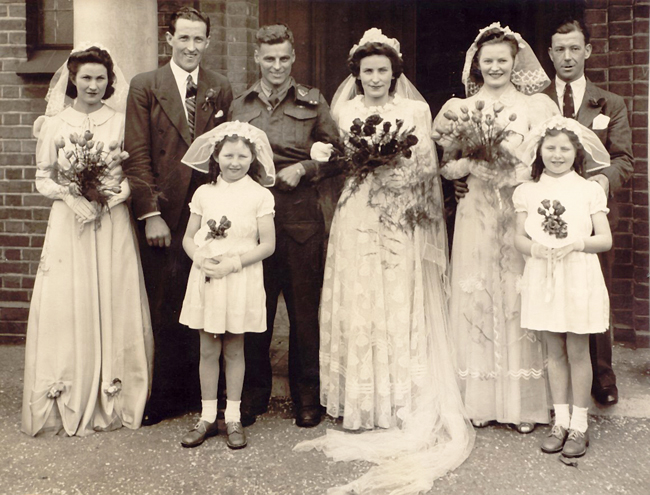 No information is available about this glamorous couple, but they look like movie stars. The bride is wearing a smart hat with a birdcage veil and carrying a large fur muff, complete with a tiny face. That was the height of fashion back then! 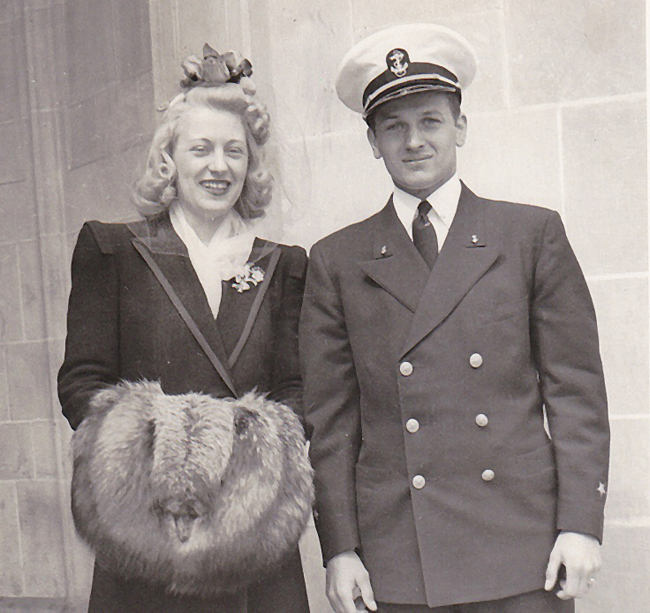 I’ll bet the groom endured all the typical jokes about wearing a skirt, but doesn’t he look dashing? Eswyn Lister was one of the first war brides to arrive in Canada, when she married Stu Lister. This photo is found on the Canadian War Brides Facebook Page. 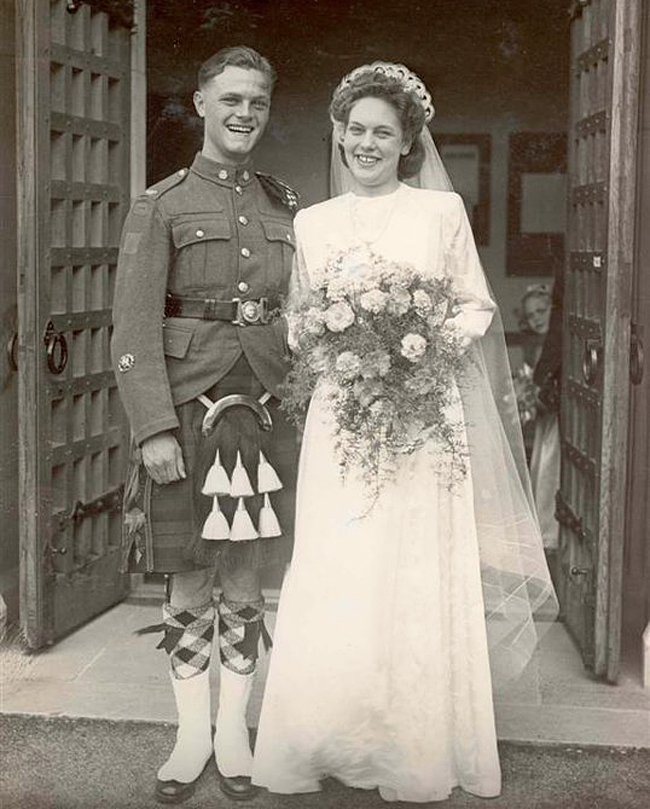 This Australian wedding photo was unearthed in a historic collection; the names are unknown. The little attendants are simply adorable, even if they don’t look very happy. 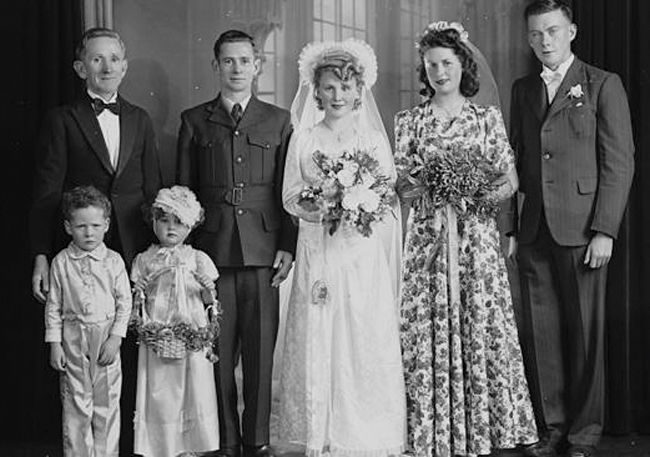 Did you ever see two people look so radiant? The bride is gorgeous in her simple green dress and corsage, and the young man is just beaming with pride. 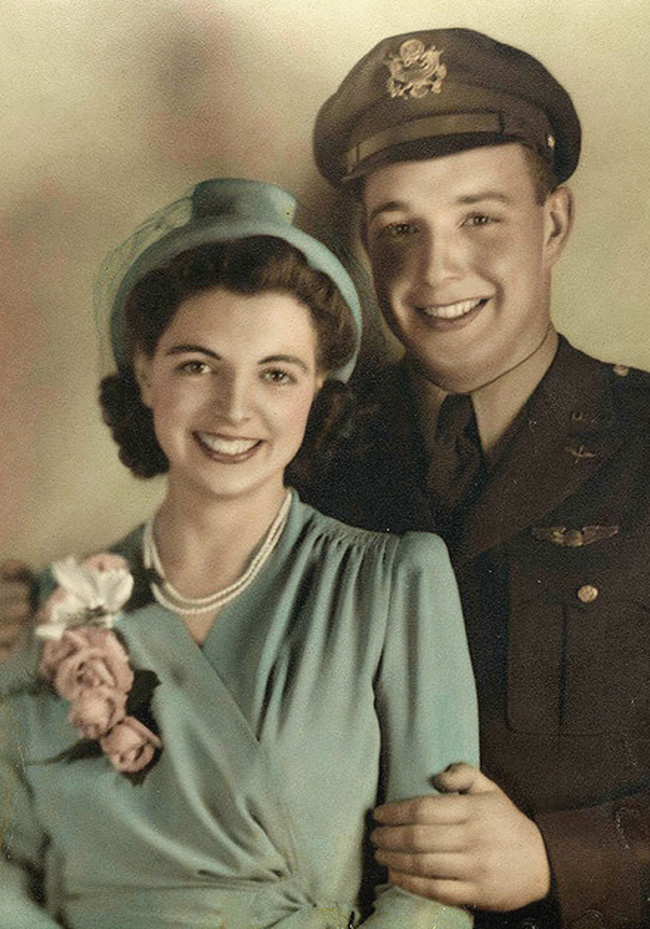 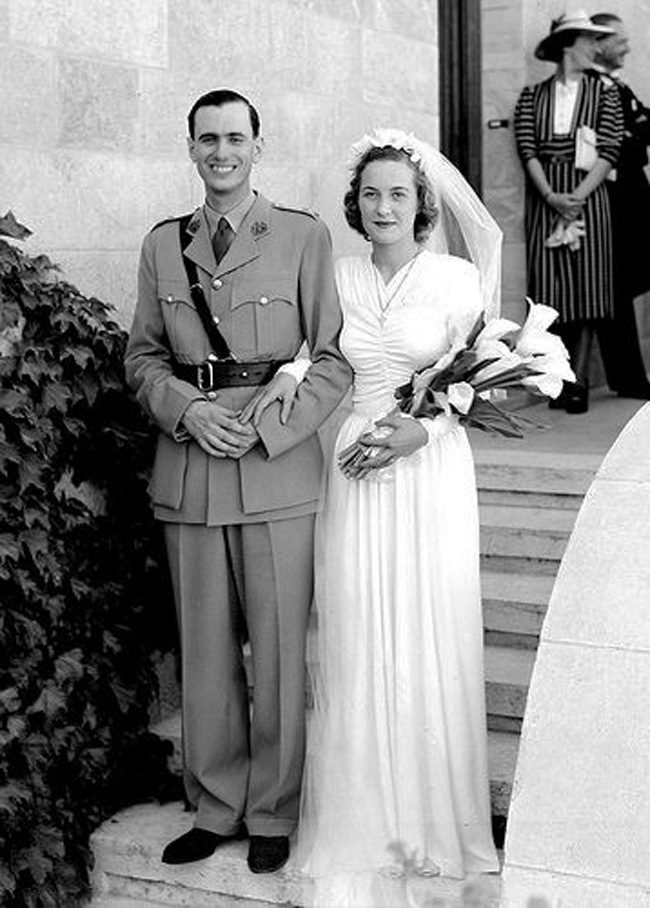 Jean Morley of Claremont, Ontario and Harvey Maclean were photographed on their wedding day in a Halifax, Nova Scotia, dockyard chapel. They had one night together before Harvey was shipped out. 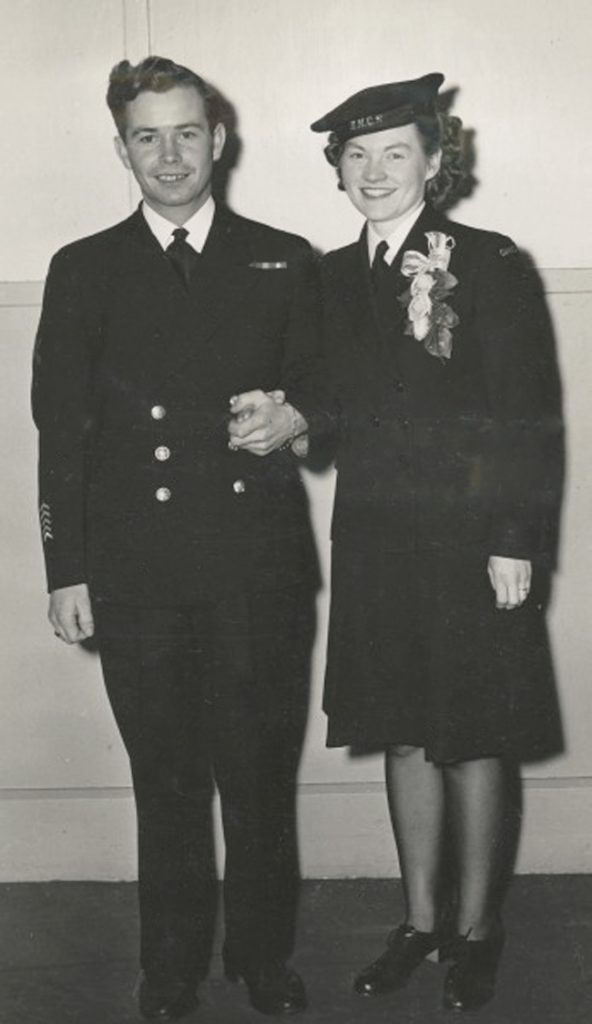 This English bride named Doris is so overjoyed to have her soldier home again that she doesn’t care about his missing leg. She married her French Canadian sweetheart and moved to Montreal, where they had a long and happy marriage. Doris is carrying a silver paper horseshoe for luck, which was common among war brides. 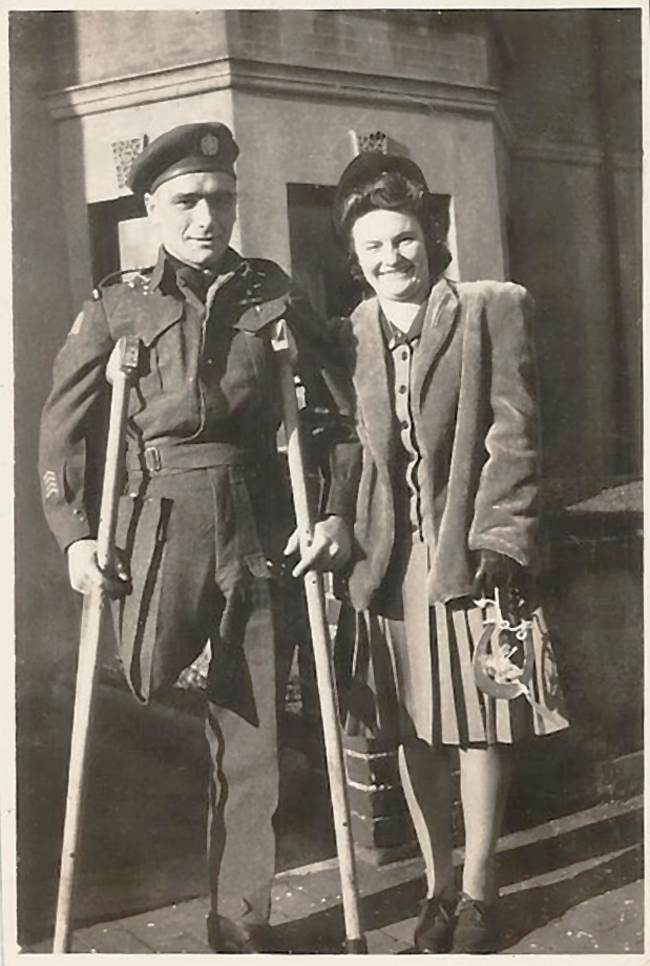 British society girls also married in wartime, including Deborah Mitford, aged 21, one of the famed Mitford sisters, who married Andrew Cavendish in 1941 and later became the Duchess of Devonshire. 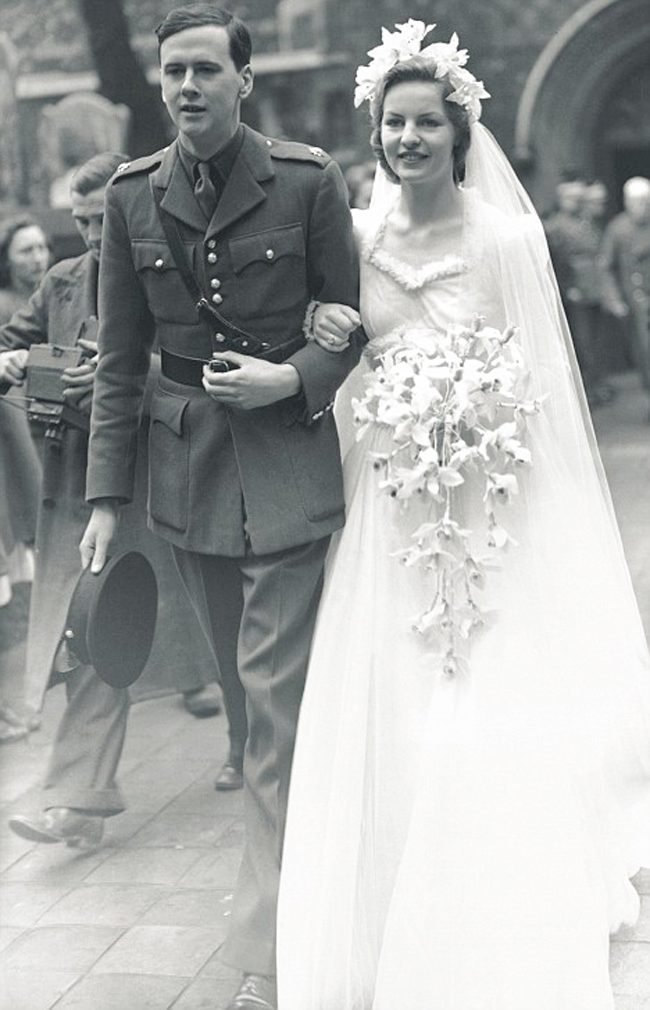 This bride wore a purple suit and a hat with a feather in it when she married her handsome Canadian soldier. Cathie and Glen Elliot are pictured here on their wedding day on Christmas Eve, 1940, in Aberdeen, Scotland. Cathie is carrying the traditional silver paper horseshoe for good luck. 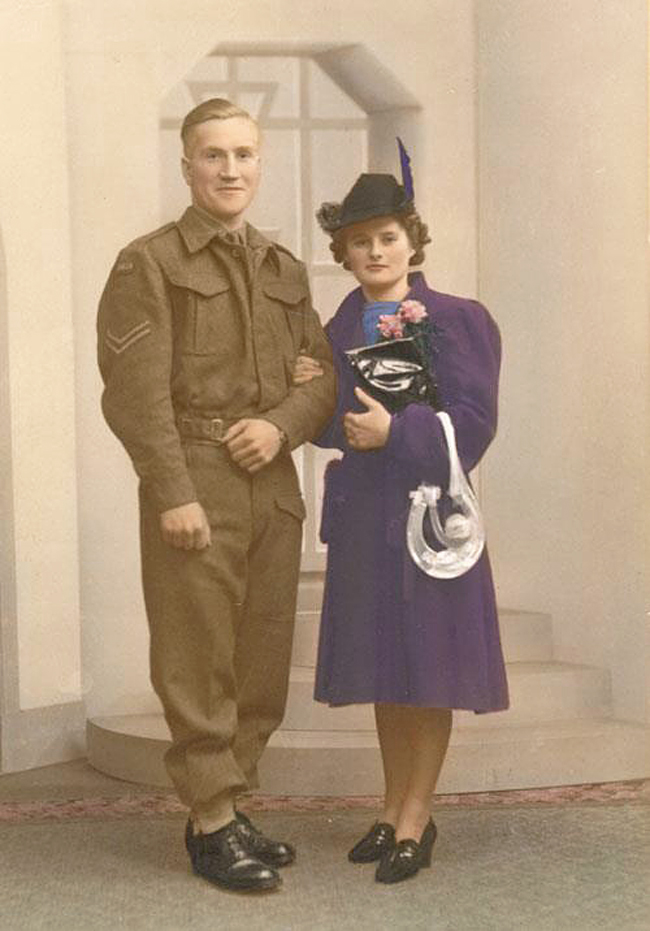 Most war brides were British, and after the war they travelled not only to Canada but to the United States, Australia, New Zealand and wherever their husbands lived. Claire Dunlop moved to New Zealand following her wedding to Pilot Officer Allen Dunlop on September 16, 1944. 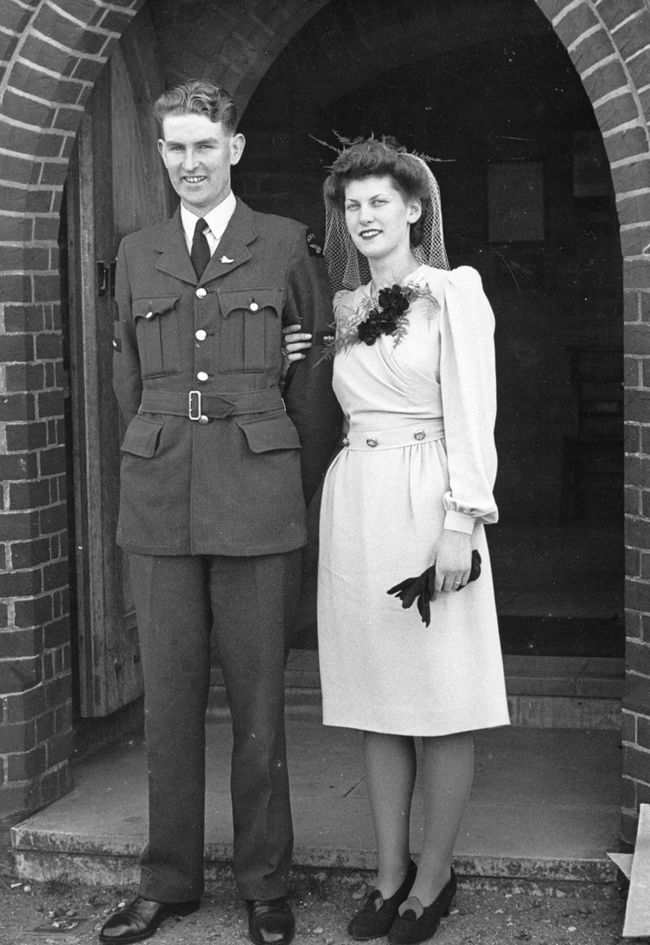 Clothing was rationed during the war, like everything else, and you had to save your clothing coupons to buy new garments. Ruth Moll and her sister Gladys pooled their coupons to buy a wedding dress they could share. First Gladys wore the dress, then it was altered for Ruth, shown here at her wedding to Lieutenant Bert Schmidt on December 7, 1943, in Albury, New South Wales. Photo credit: Australian War Memorial. 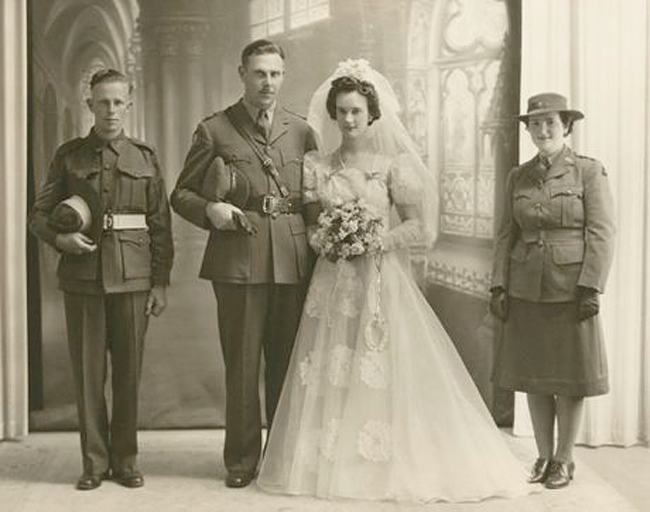 Are they both brides, or is the girl on the left a bridesmaid? No information is available about this wedding. But don’t the girls look beautiful, and aren’t the boys smart in their uniforms? 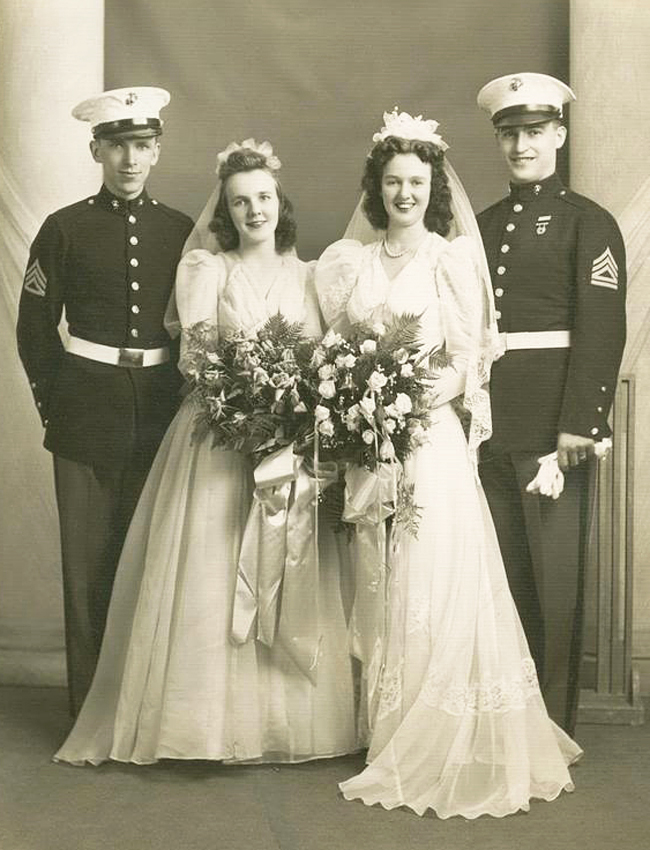 Charles Miller of Bald Rock, Nova Scotia married his war bride Violet in a lovely wedding on January 12, 1945 in Stoke-on-Trent, England. Note the matching bridesmaid dresses, and the huge bouquets of flowers, even in January. 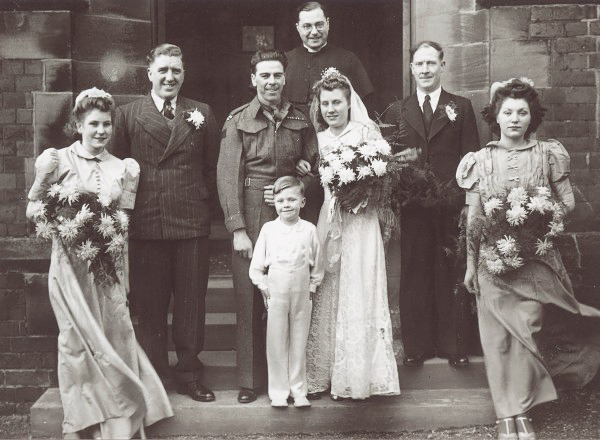 An unidentified English gunner marries a member of the Auxiliary Territorial Service in London, October 1939. Her friend decorates the bride with a lucky horse shoe. Photo credit: National Museum of Photography. 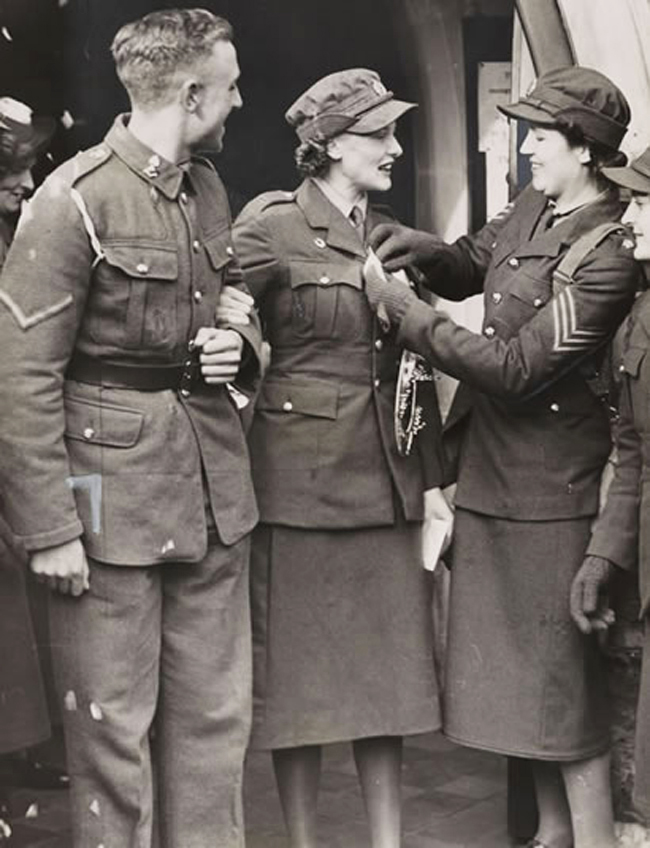 Canadian soldier Paul Dumaine of Saint-Hyacinthe, Quebec was taken prisoner of war at Dieppe, France on August 19, 1942 and didn’t see his English fiancée again until the war ended in May 1945. In a desperate effort to end the war sooner, Joan joined the women’s Auxiliary Territorial Service herself, after Paul became a prisoner. Here they are on their wedding day on July 4, 1945, just weeks after the war ended. Paul was still very thin and weak from his imprisonment, but both of them look so happy that their long separation is over! Happy Valentine’s Day to all lovers, young and old! 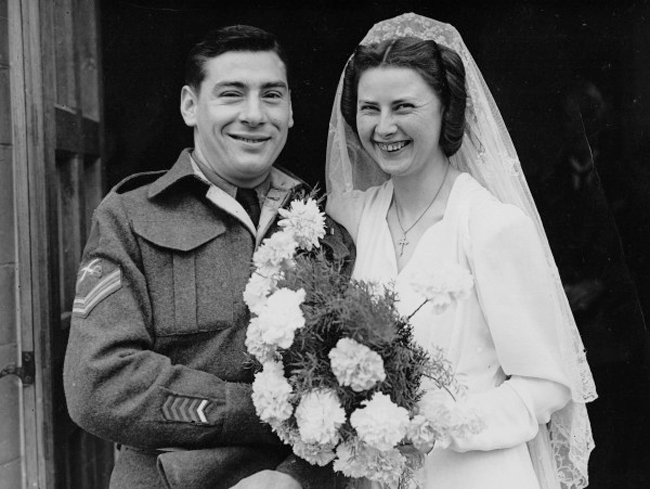 The Star Weekly was a Canadian newsmagazine published by the Toronto Star. To see my entire collection of wartime covers, click: Star Weekly At War.

To read about the artist who created this lovely illustration, click: Elizabeth Cutler. 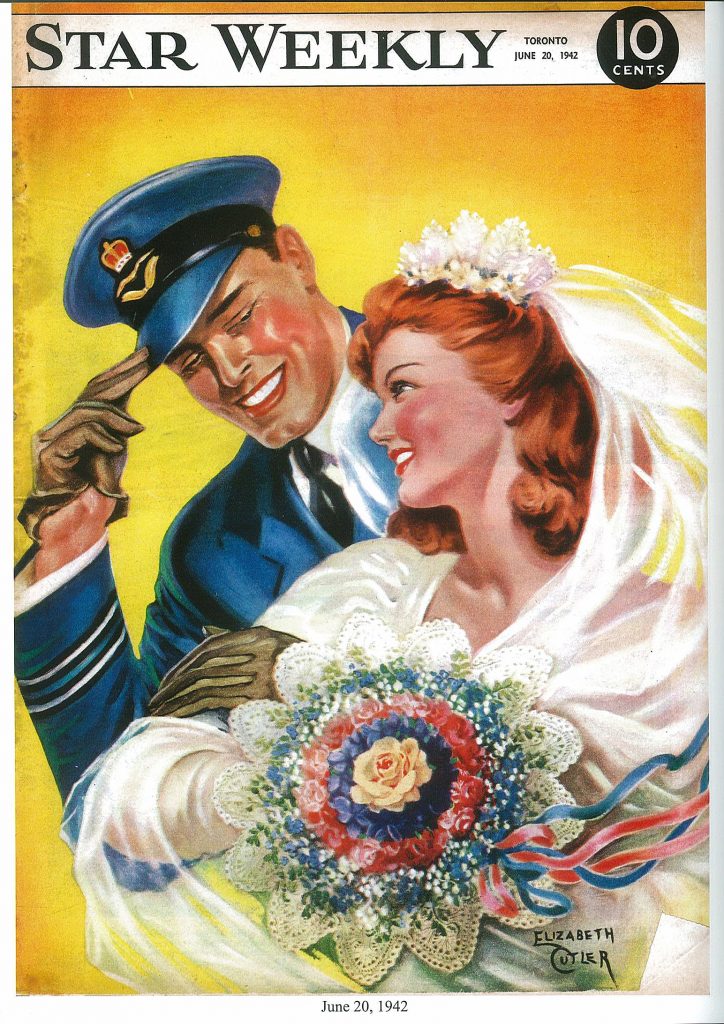