Note to Readers: This is the first introductory blog post I published, back in October 2013. I went on to write more than 100 wartime stories and they are all available on this site under the Wartime Wednesdays category. I currently write a more personal monthly blog called Letters From Windermere, and you’re welcome to subscribe using the button on the right side of the page.

As a child, I used to lie in bed at night and imagine the ghosts of all the air force veterans around me.

That’s because the farm in Saskatchewan where I grew up is a former airfield, one of hundreds created during the Second World War through the British Commonwealth Air Training Plan.

Of the tens of thousands of men who trained here and at other air bases across Canada, some crashed and died in our country.

Some flew successful missions against the enemy and lived to tell their tales.

Some were killed in combat and never returned home again.

Perhaps that’s why I’m fascinated by war stories, not only those about the overseas conflict, but also about the events that took place here at home — literally in my own back yard.

Canada, also known as “democracy’s airport,” was responsible for training 130,000 aircrew from all over the world in our sky-and-dry climate. But after the war, these airports were often abandoned or sold off.

When my father returned in 1946 from his stint overseas with the Royal Canadian Air Force, he was sick of taking orders and desperate to purchase his own farm. 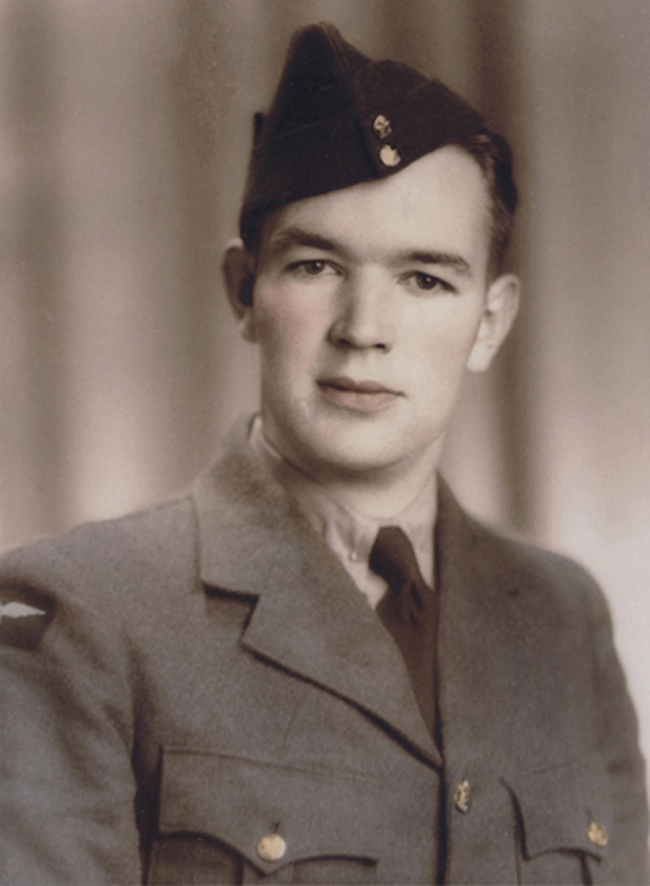 So he scraped together the money and purchased one of the flat, treeless airfields from the Department of National Defence, which was ideal for farming.

It was called a relief airfield, because it handled the overflow from the main station at North Battleford.

Along with the land came several sturdy, serviceable wooden buildings. Typical of governments everywhere, no expense had been spared. They were made of the finest lumber, with shingled exteriors painted military green, and distinctive six-over-six paned windows.

Our house was fashioned from a former T-shaped barracks building. The T was cut into two pieces, and the short end became the home where I grew up. The other end was moved into North Battleford where it became the home for the Mennonite Church and it remains so today. 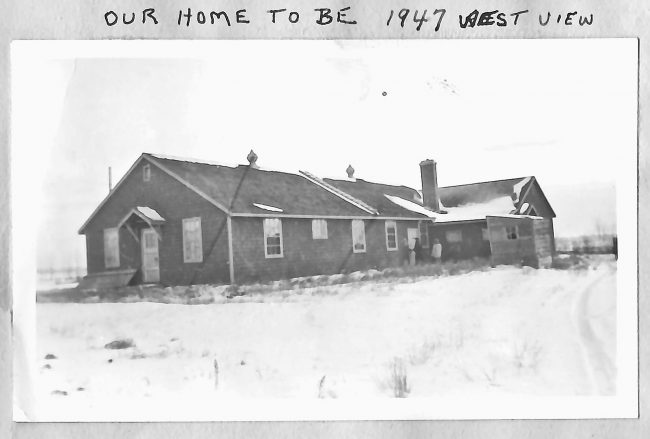 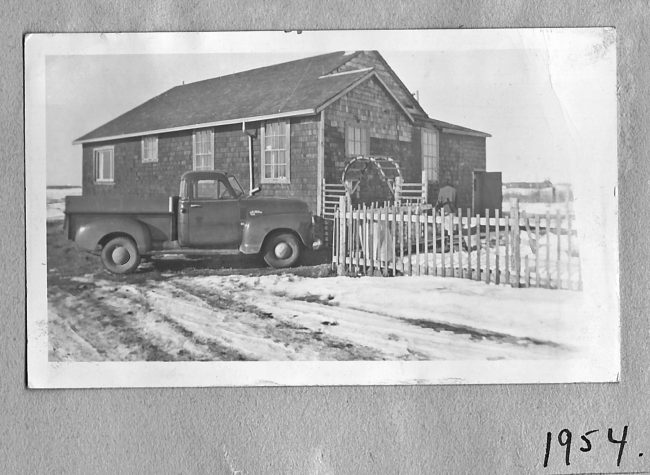 By 1954, my parents had not done much to the house but they had managed to erect a white picket fence!

My father plowed under the grass runways, and planted wheat. This was their first bumper crop in 1954. Sadly, a grain disease called rust wiped out the whole crop shortly after this photograph was taken. 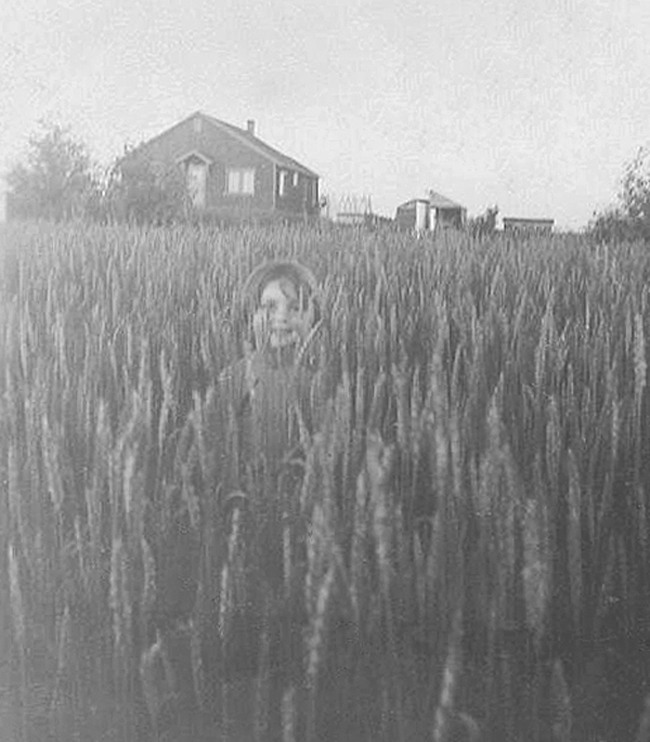 After several years, my father finally got around to painting the military-green shingled exterior in 1957, with the “help” of my younger brother Rob and me. 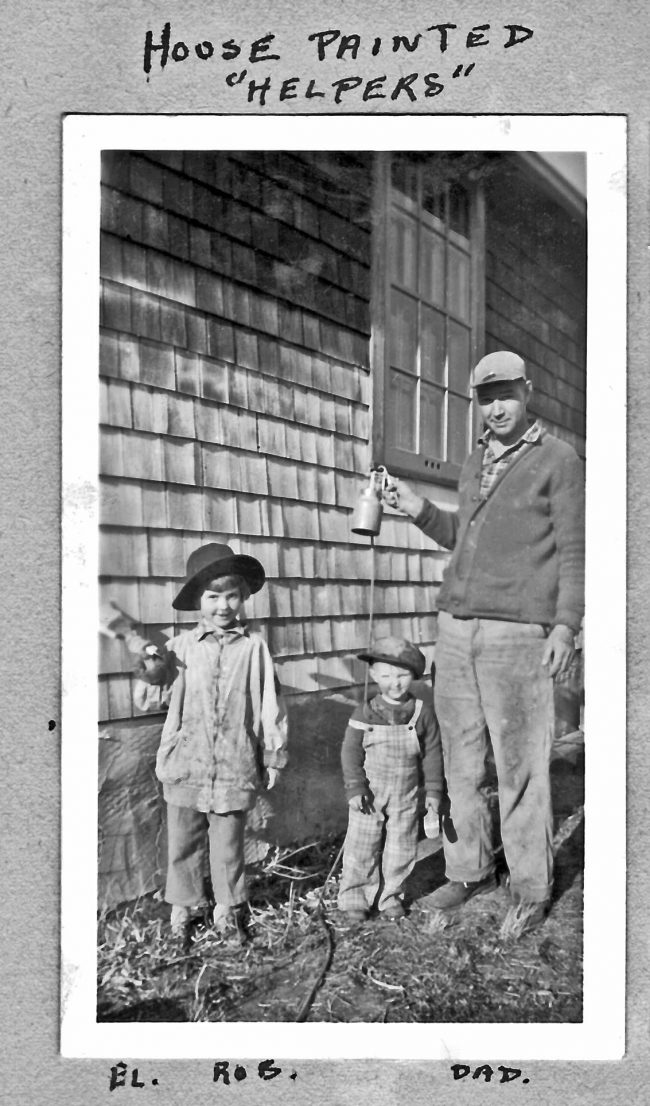 My parents have passed away now, but my brother Rob took over the farm. The house where I grew up was still used by my mother June as a summer residence until she died in 2017. 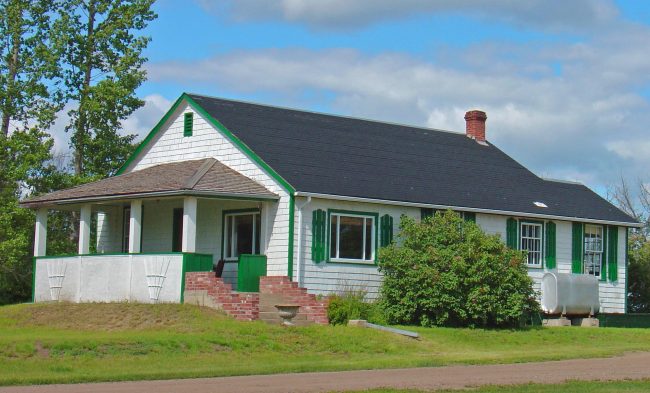 Here she is on one of her last visits to the farm, seated in her lovely sunny kitchen. Note the wood stove and the original linoleum on the floor! 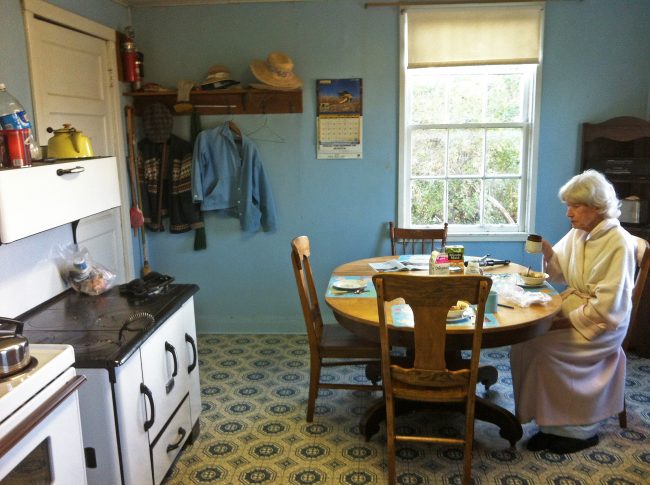 Fortunately, I can return any time I like, to sleep in my old bedroom. 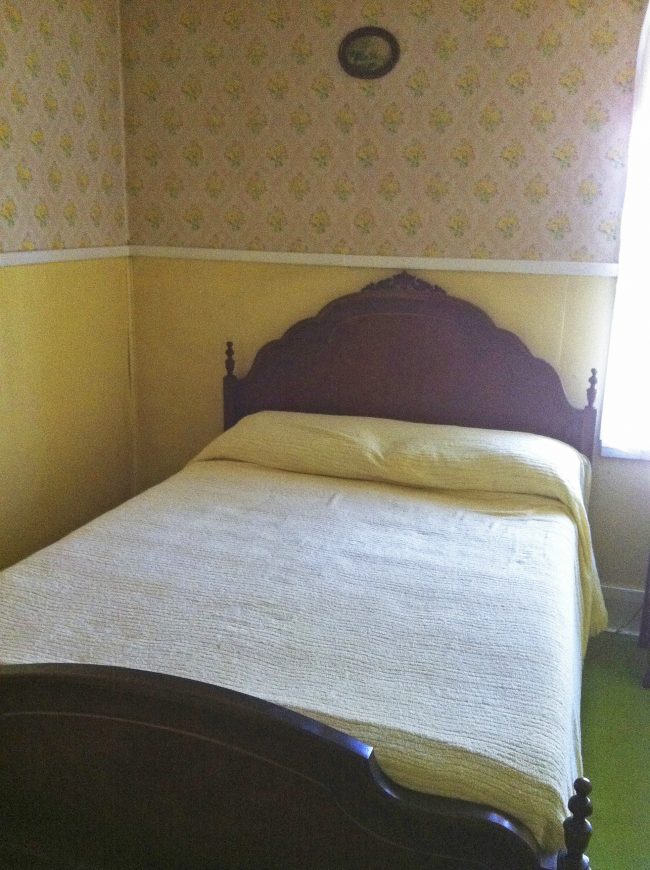 In the nearby field, the main airfield administration building still stands. The long grassy track was once a busy runway where the new recruits practiced their wobbly takeoffs and landings. 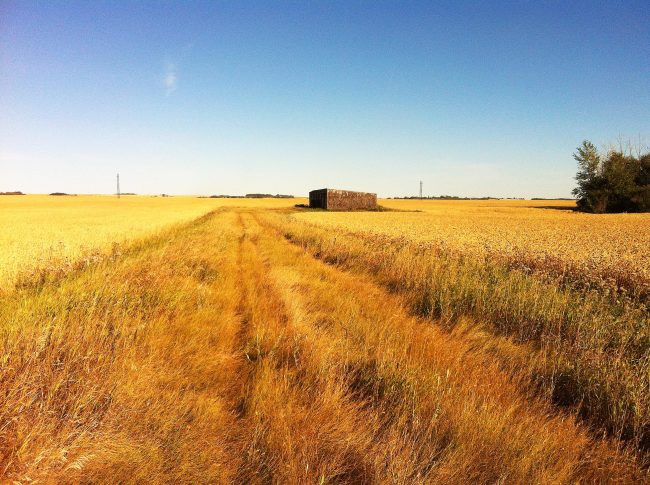 The original building had three large storage bays, with administration offices at one end. A staircase led to the roof, where a square glassed-in control tower allowed the officers to keep an eagle eye on the raw recruits. 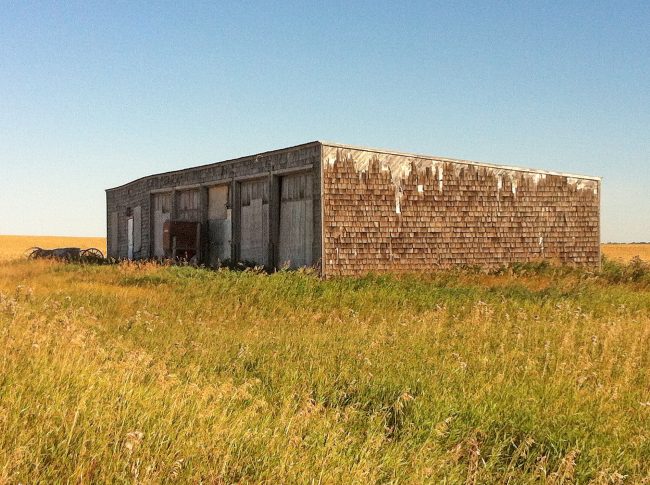 Now little remains but a calendar from 1945, still hanging on the wall. 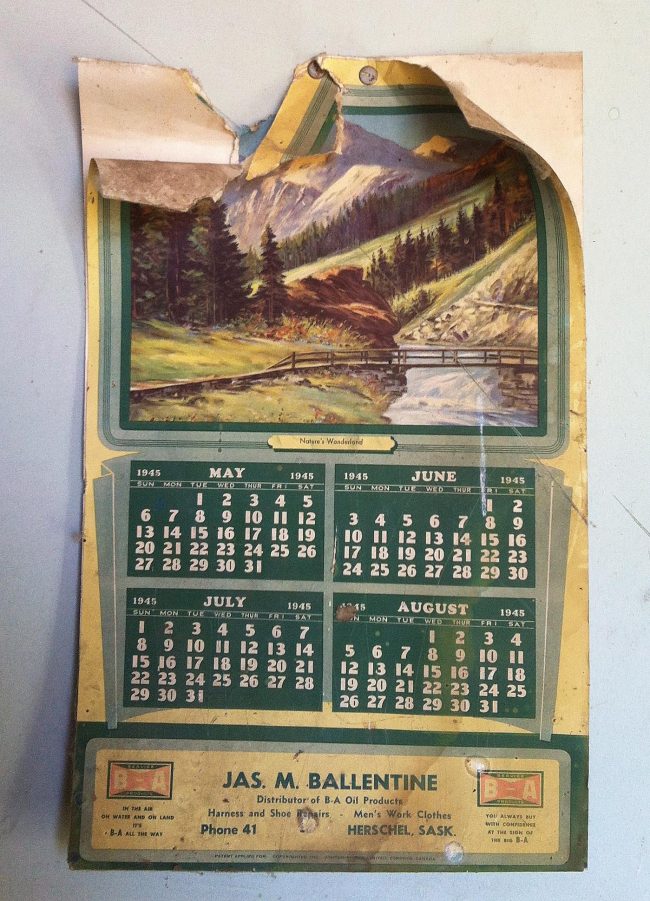 My sister Mary Margaret and I moved away, but my brother and his wife took over the farm and raised four children here. Like us, my nephews and nieces romped among the ruins of the former airfield.

Several years ago, my brother erected a permanent marker to honour the farm’s former glories. 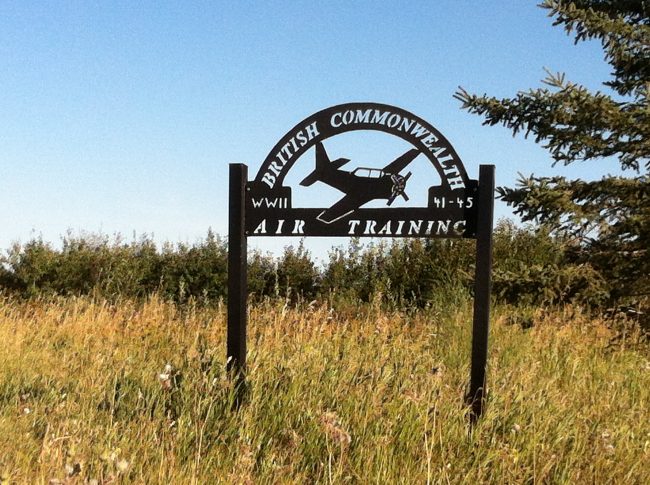 Perhaps one day that will be all that remains of the past.

Read more about my life and times here: About Elinor.

My wartime novel Bird’s Eye View is fact-based fiction, the story of a farm girl from Saskatchewan woman who joins the air force and works as a photo interpreter. Read one thrilling chapter here: Bird’s Eye View Excerpt.

My contemporary novel Wildwood is the story of a young single mother from the city who inherits an abandoned farm in northern Alberta, on condition that she and her little girl live there for one year. Read the opening chapter here: Wildwood Excerpt.