It was a great thrill to travel back to the farm, to see my beloved family, my childhood farmhouse, AND my new farmland. Earlier this year I purchased some land and rented it to my brother Rob Florence, who owns the family farm east of North Battleford, Saskatchewan. Here I am, outstanding in my new field. 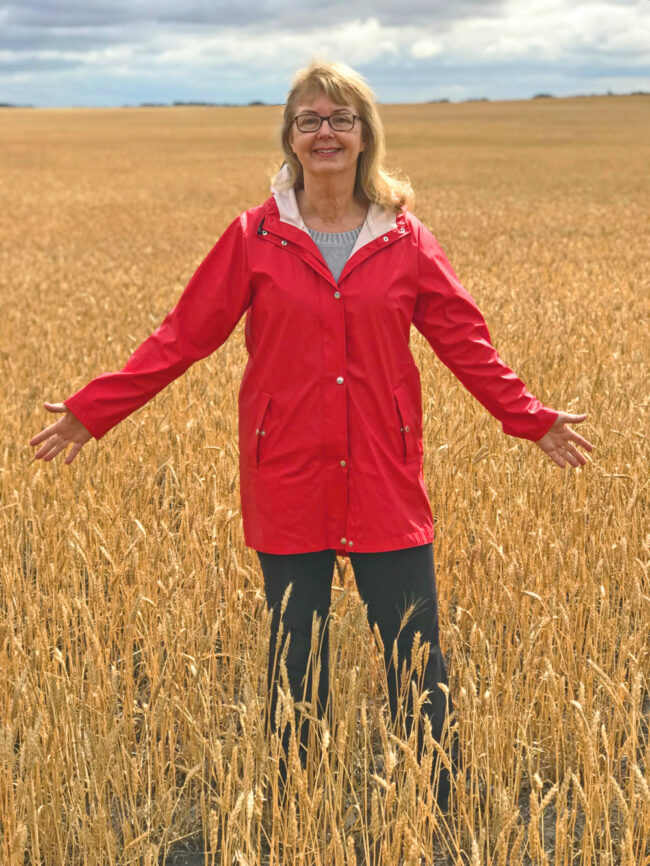 Covid kept us at home for two years, but in August we finally made the 900-kilometre drive to the beautiful parkland area of Saskatchewan where I grew up. We enjoyed the hustle and bustle of being there during the harvest, always the happiest time of year on the farm.

Having said that, this year saw a widespread drought and although the golden fields are still as lovely as ever under the sapphire sky, they are stunted — in many places only a few inches high.

Here’s a photo of me in 1954 in the wheat field outside our farmhouse. Granted, I was only half as tall as I am now, but the wheat was still about three feet high. Compare that with the height of the wheat in the first photo. My brother anticipates yields of about thirty percent of the average. He said philosophically that since crops have been very good for many years, they were due for a failure. 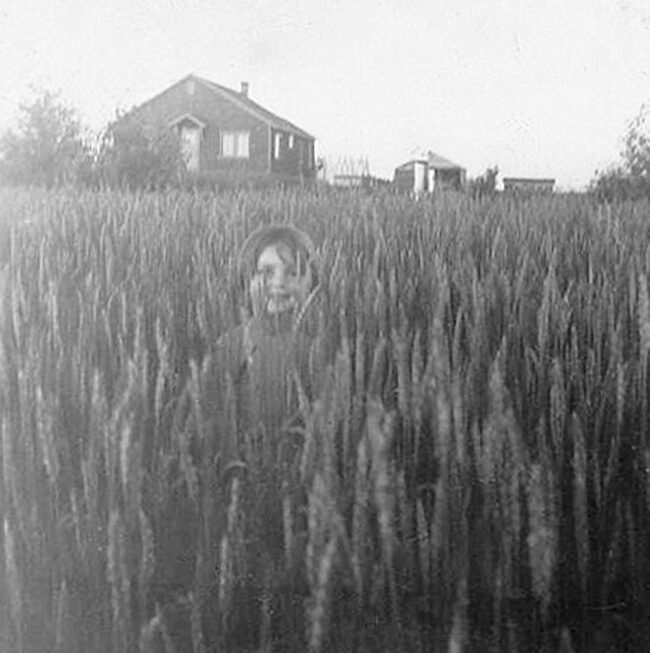 At the corner of my field, here’s a Yield sign filled with — you guessed it — bullet holes! This is obviously vandalism, but not dangerous since nobody for miles lives near my chunk of land. I guess that sign made a very tempting target! 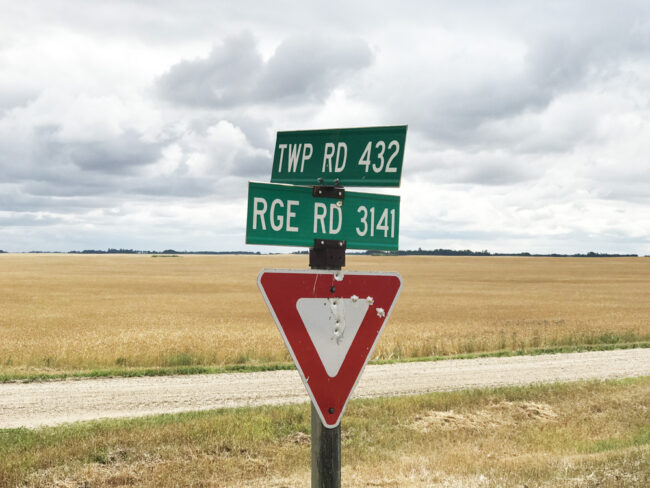 Since farms are so large and people so few, the wildlife has returned. Here a couple of moose are wandering through a swathed canola field.

Canola is an oilseed crop that produces pods filled with tiny black seeds, which are crushed to extract canola oil.

Swathing is the method by which the grain is cut and left in rows called swaths to ripen before the combine comes along and separates the seeds from the plants. 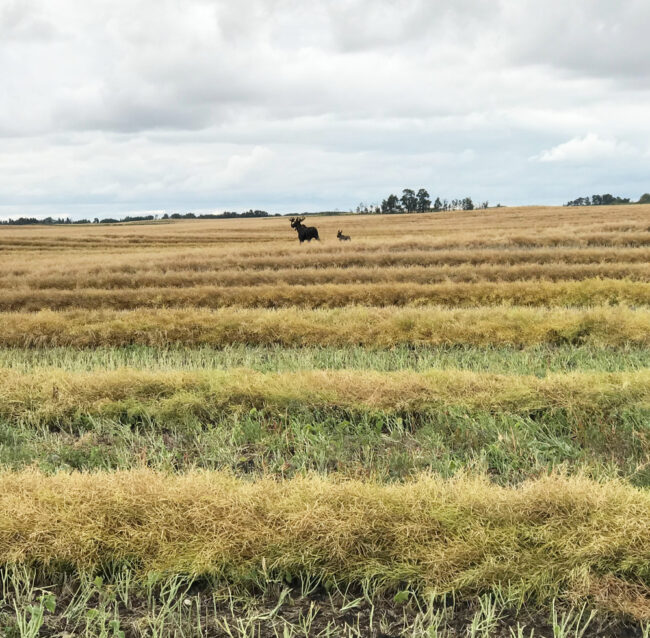 And this, my friends, is a combine. Apparently we are now so far removed from the source of our food that some people don’t even know what it is.

The combine shears off the standing plants (or picks up the swaths), and separates the straw from the grain, which is poured into the truck and taken away to be stored in a granary.

Astonishingly, a new combine can now cost as much as one million dollars! (So please don’t complain about the cost of a loaf of bread.) 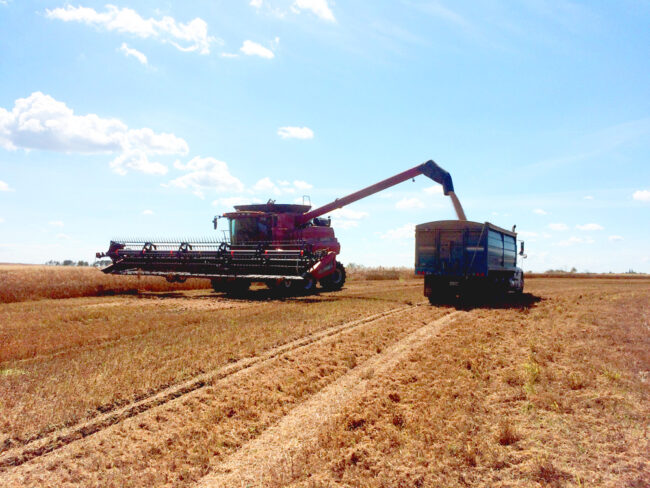 If you are a regular reader, you probably remember that our farm was an airport for the British Commonwealth Air Training Plan during the Second World War, and our house was a converted barracks building. You can read about this in my very first blog post: Growing Up With Air Force Ghosts.

When my brother purchased the farm from my parents many years ago, he built a new house in the same yard and raised his family there. My parents retired to British Columbia but continued to use the old house as a summer residence. This ended when my mother died in 2017, and the house has been empty ever since. 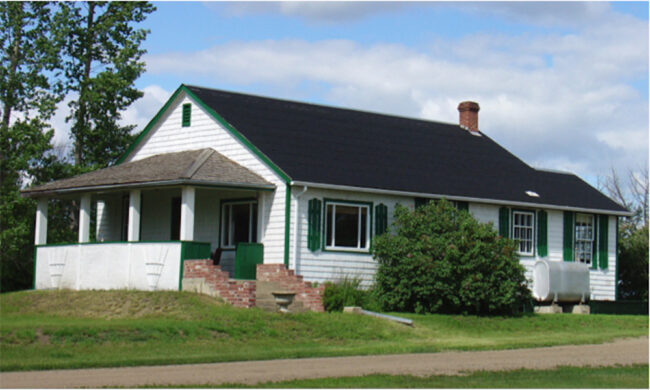 I decided to sleep in the old house for sentimental reasons, although the insects have had a festival in there for the past four years! After sweeping out cobwebs and dead flies, wiping down all the surfaces and washing the kitchen floor three times, the house was reasonably comfortable once again.

I wrote about this old house before, and little has changed since then. You can see some photos here: Farmhouse Kitchen.

I chose to sleep in the bedroom that belonged to my parents, because it was marginally cleaner. 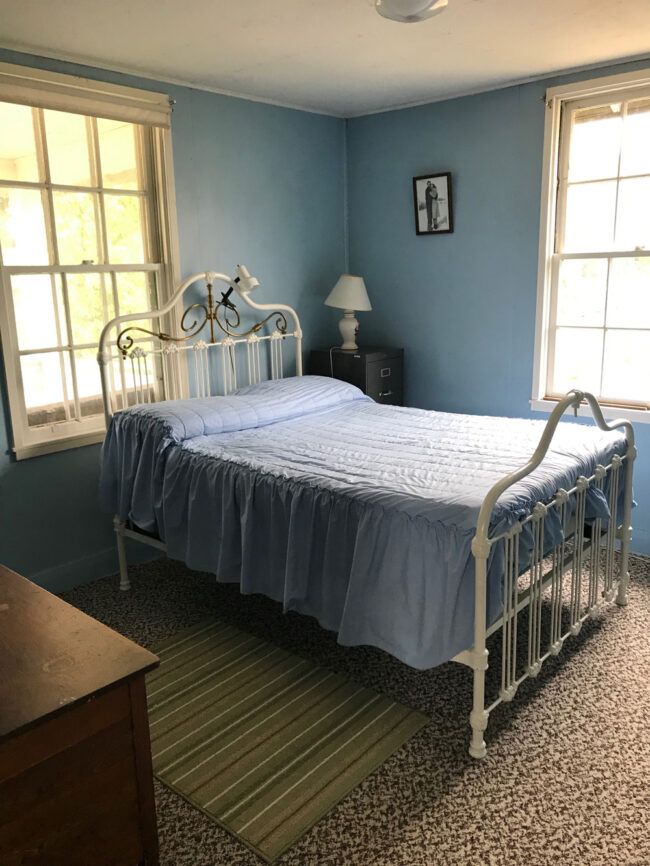 Most of the “good” furniture has been removed, but there are still a few nice old pieces. Note my brother’s Robin Hood lunch pail on the top shelf! 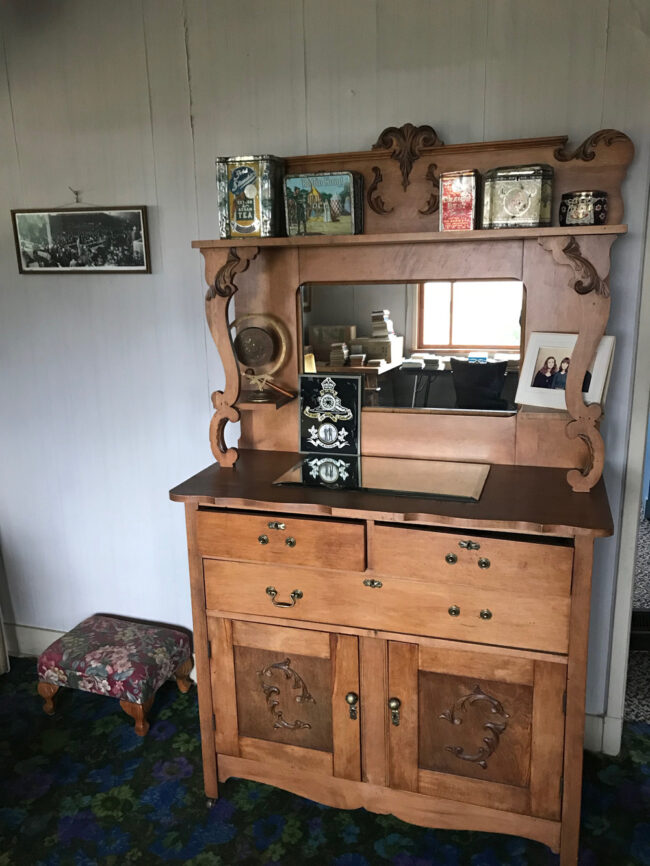 The bathroom was pretty grim. I employed enough elbow grease for six elbows. 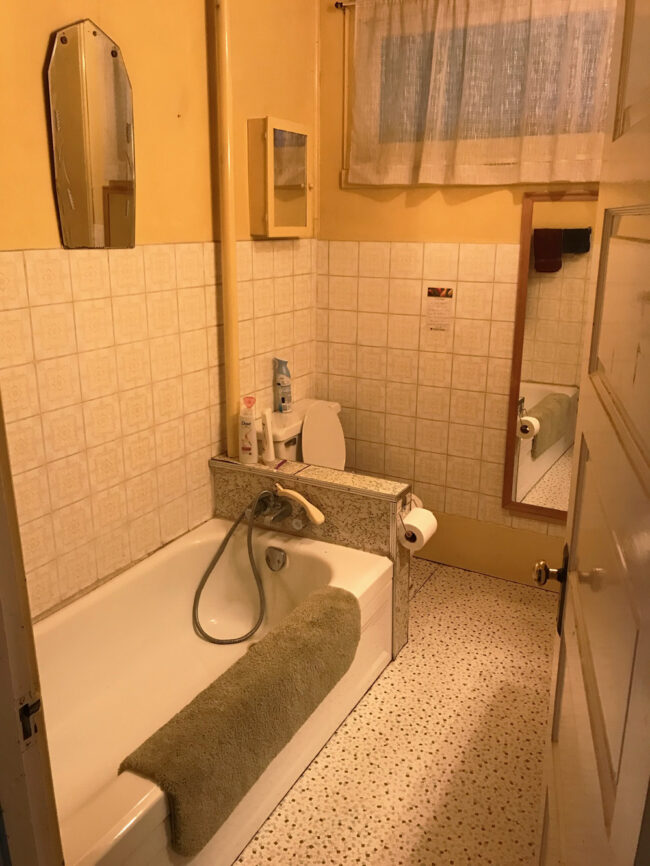 And nothing has been touched in the bathroom cabinet for decades! 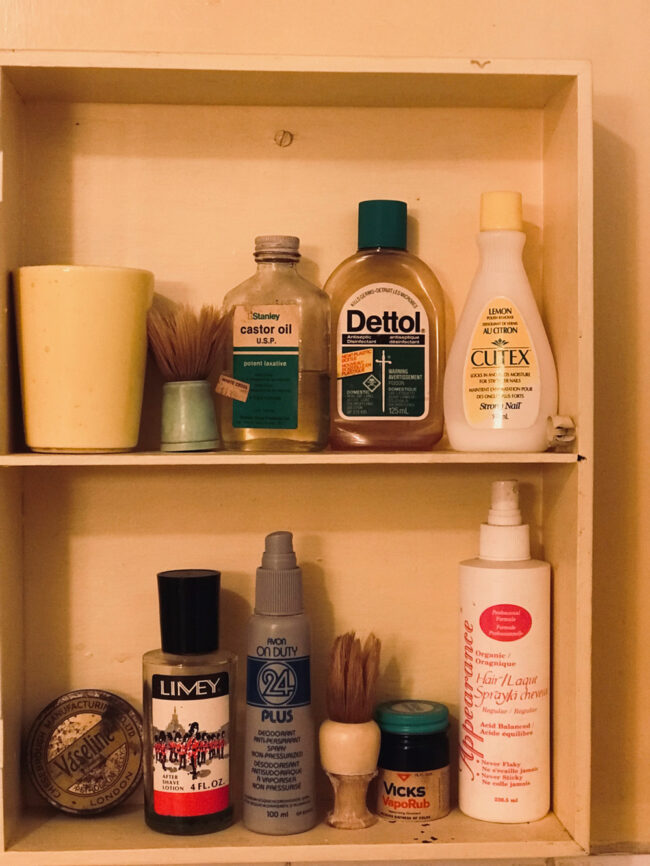 But the kitchen, always the beating heart of our home, has retained its cheery atmosphere. Here we are having morning coffee with brother Rob, his wife Wendy, and our cousin Klaus Berger from Chilliwack, B.C., who came to help with the harvesting. We were sitting around in the kitchen because it was raining that morning — otherwise it is all hands on deck during the harvest season. 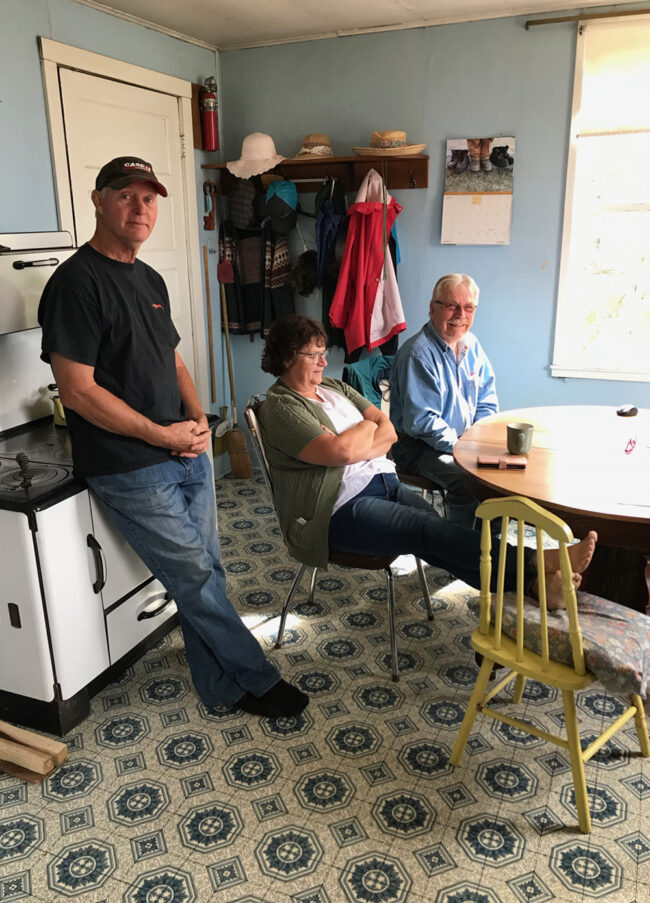 We lit the old cook stove every morning, since the temperatures had cooled. 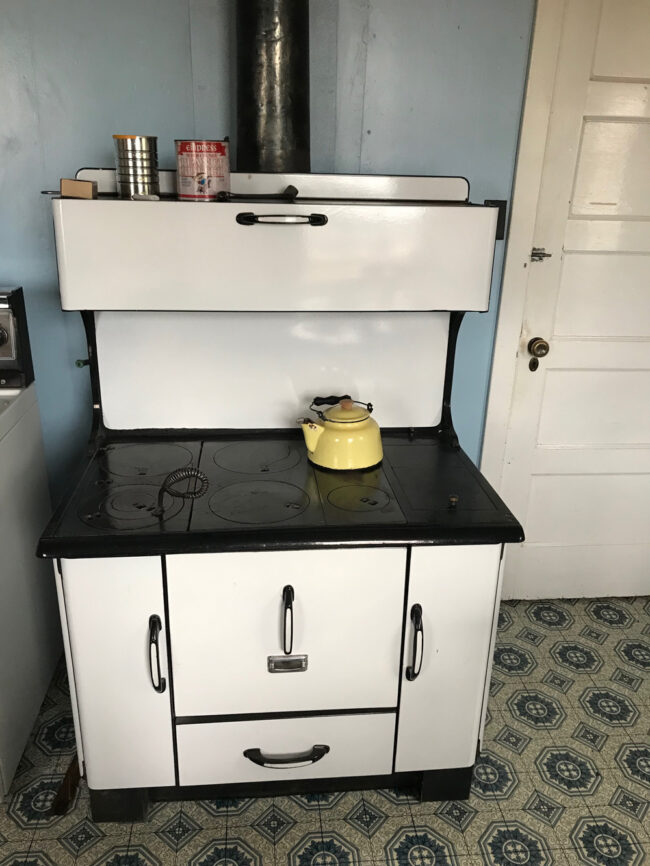 I ate breakfast at this table every day of my life until I left home, and hundreds of times since then. 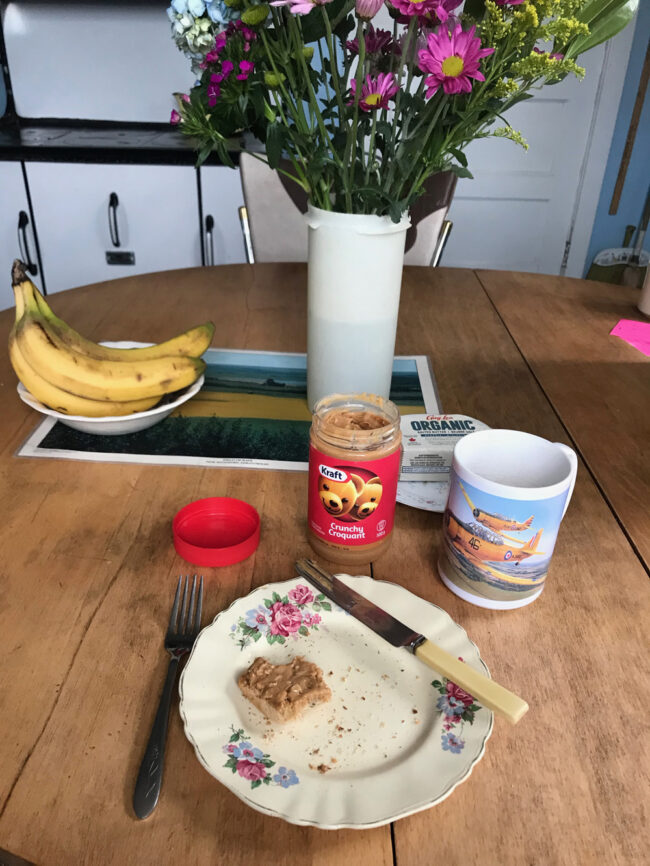 Even the placemat is an old one, predating the 1980s when canola replaced rape as a newer and healthier version of the oilseed crop. The blooms are just as brilliantly yellow, though. 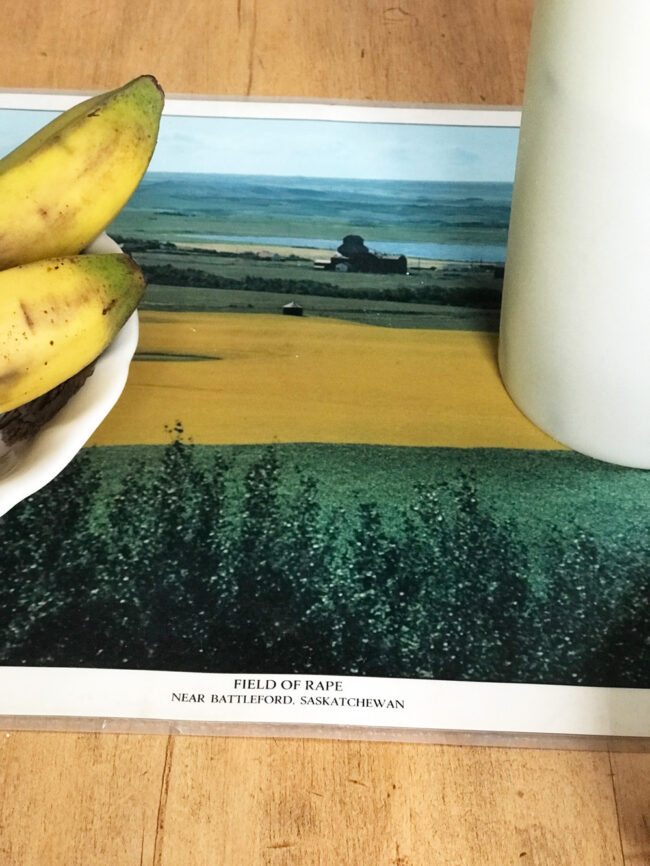 The kitchen cabinets are still in good shape. 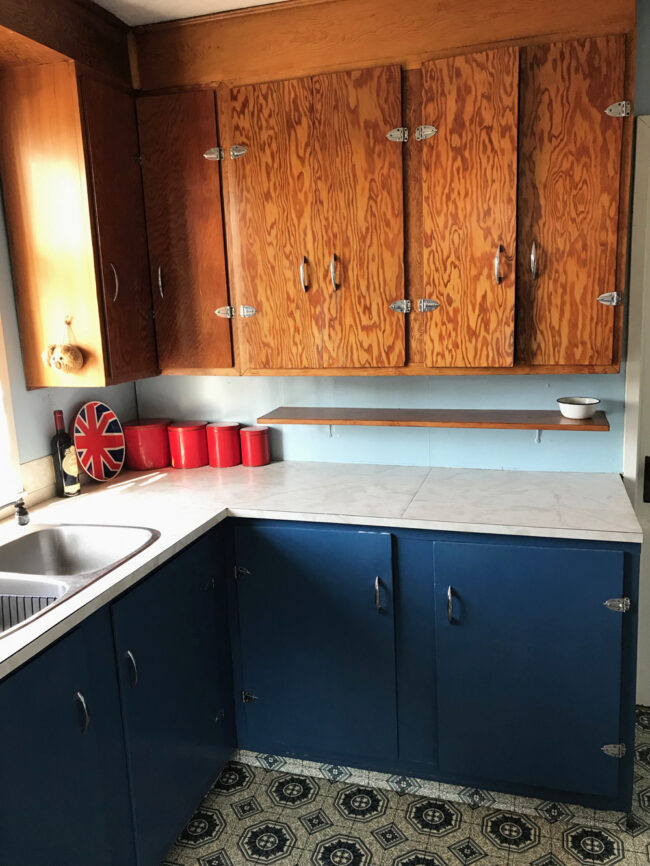 An old Saskatchewan Wheat Pool calendar hangs behind the kitchen door, showing the location of all the grain elevators in the province. At one time, every farm had a copy of this calendar. This farmer-owned co-operative was sold to a multinational grain company in 2007. 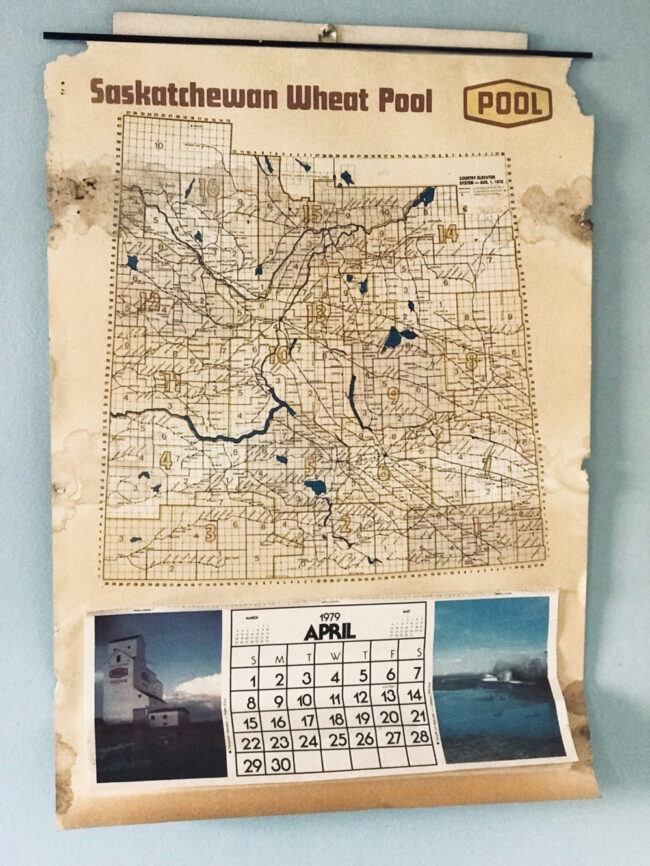 From the living room, you can see how lovely and sunny is the old kitchen. 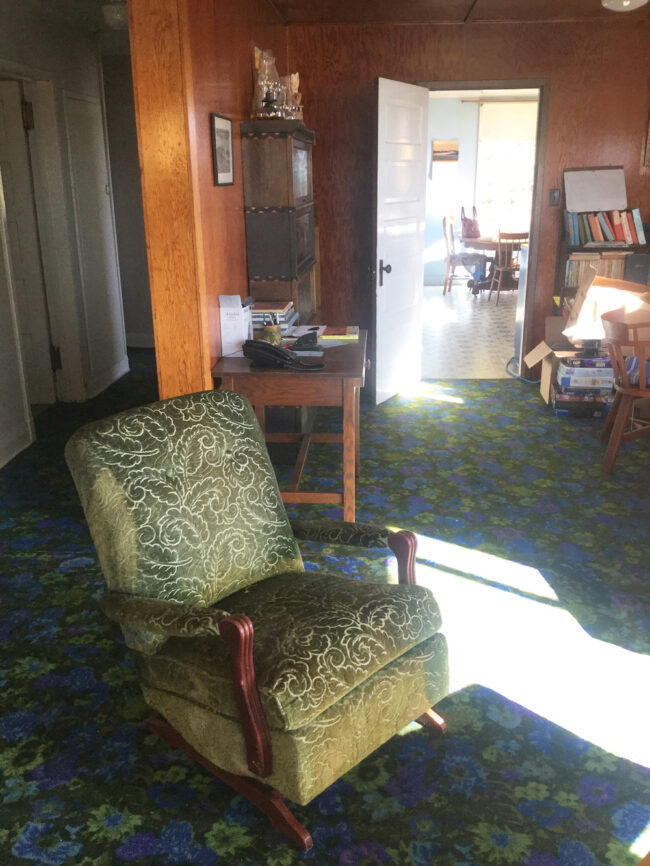 Since my brother owns the old house, he has the painful task of disposing of the contents. Plans are afoot to remodel the old house for his son’s family, and I would dearly love to see that happen.

Last winter, Rob began with the books. He set up a table in front of the living room window where he spent most of the winter huddled beside a space heater, poring over mountains of old volumes. My parents were inveterate book collectors who inherited books from their own family members, exchanged books as gifts, and never passed a used book sale without buying something. 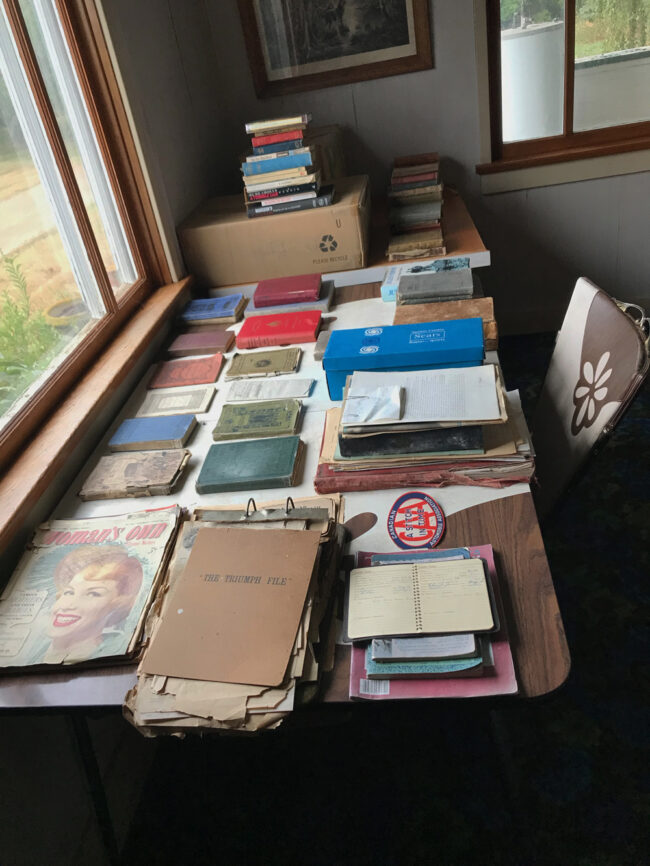 The bookcase in the dining room is overflowing. 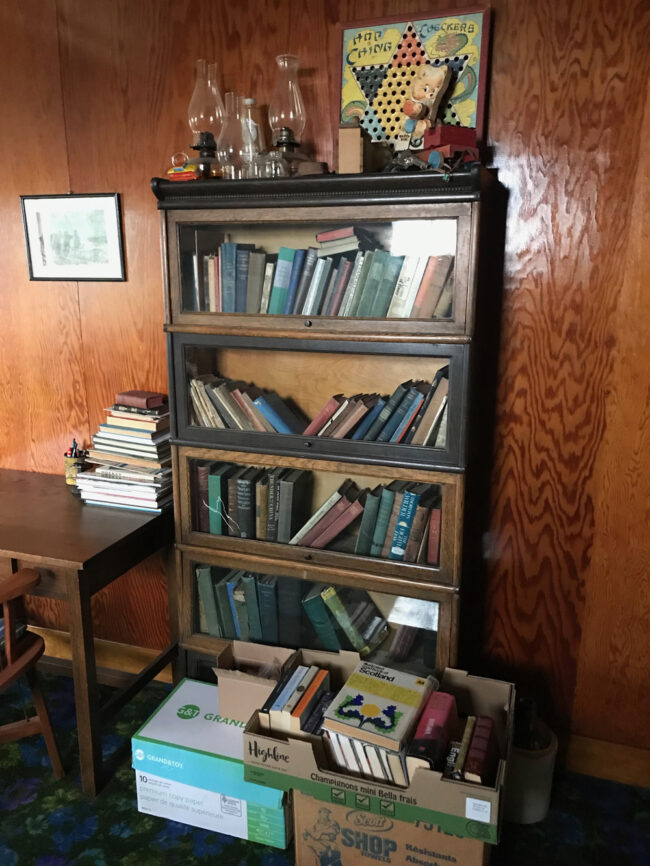 There are books piled everywhere.

(As an aside, every square inch of the flooring is beautiful hardwood, which my parents covered in the 1960s with floral indoor-outdoor carpeting!) 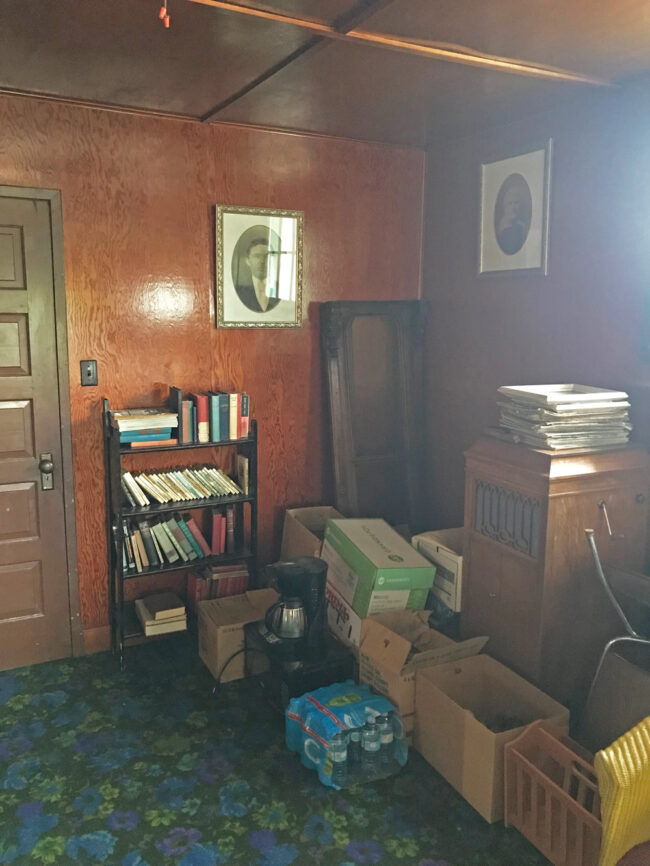 They also kept boxes of files, telephone books, sheet music, and magazines ranging from National Geographic to Popular Mechanics. Although I promised myself I would not bring home anything else (since my own house is bursting with books and collectables), I could not resist this wartime copy of the Star Weekly. To see my collection of Star Weekly covers, click: Star Weekly at War. 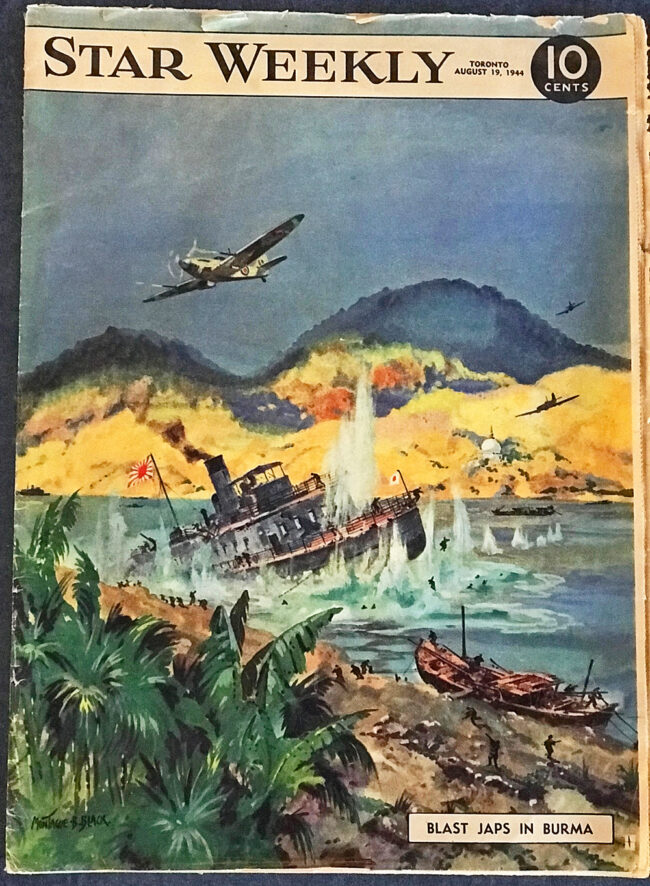 I love old farmhouses so much that I created one in my novel Wildwood, filled with the sorts of things that are still found here in my childhood home.

This poem nicely sums up how I feel about old houses in general. 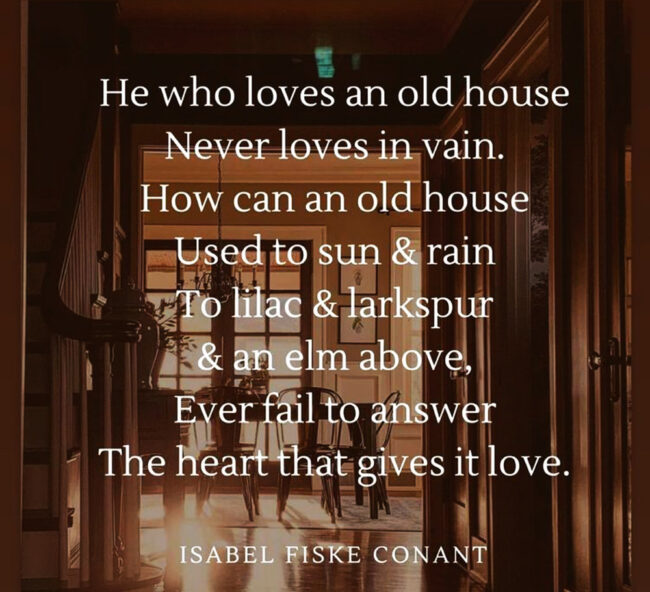 Farming, Then and Now

The farmhouse hasn’t changed much, but farming sure has! Here are some facts about farming, for those of you who have lost touch with our agricultural roots.

THEN: My parents raised three children by farming 320 acres of land.

NOW: My brother and his wife and son farm ten times that much.

THEN: Farmers killed the weeds by aggressively cultivating the topsoil, turning it into powder and sending it into the air in black clouds.

NOW: In the 1990s effective herbicides were invented, and weeds are killed by spraying them instead. Zero tillage is much healthier for the soil.

THEN: Farmers had to stop using their machinery during seeding and harvest time when it got too dark to see.

NOW: Machinery now has Global Positioning Systems, meaning that the farmer doesn’t even have to drive — he just monitors the controls. He can do that in the dark. Soon he will be able to do it without leaving the house.

THEN: Farmers relied on the Canadian Wheat Board to market their crops.

NOW: Since the demise of the wheat board in 2012, farmers have the responsibility for marketing their own crops. My brother spends time every day online, monitoring grain prices and trying to predict the best times to sell.

THEN: Machinery could be fixed with a pair of pliers, a piece of wire, and a roll of binder twine.

NOW: Everything is computerized, and farmers must rely on technical support from the machine companies. Happily, my nephew is a computer whiz and keeps the machinery running smoothly.

THEN: My father grew wheat, oats and barley. When canola was introduced in the 1970s it was so lucrative that my parents became financially secure for the first time.

THEN: There was no genetically modified (GMO) wheat.

NOW: Little has changed. The wheat grown in Canada is not genetically modified, and the breed is almost exactly the same as that first grown on the prairies in 1910.

THEN: Almost all Canadian grain was destined for international markets, most of it used to feed the hungry population in developing countries like India.

THEN: Utterly dependent on weather patterns, farmers were experts at reading the skies.

THEN: Farmers loved the freedom, independence, and beauty of rural life.

THEN: My father always told me: “Farmers have the most important job, because we feed the world.”

Yet Another Bracelet Mystery

Some years ago, I helped a woman find the rightful owner of an RCAF identity bracelet that she found among her late uncle’s possessions. I spent several years searching before posting a brief item in the Lost Trails column in the Royal Canadian Legion magazine.

Happily, the owner’s brother saw the item and was very touched to receive his sister’s bracelet in the mail. Please read the whole story here: The Bracelet Mystery.

Now another reader has located this bracelet in her deceased mother’s jewellery box, and she is wondering how to find the owner. The engraving says J. O. Brown, Service Number 6175A, C of E.

(I know that C of E means Church of England. Members were encouraged to provide a religious denomination so the RCAF would know what type of a burial service to provide.)

I encouraged her to submit a request to the Legion Magazine, but if anyone has other ideas, please comment below or email me at elinor1@telus.net. 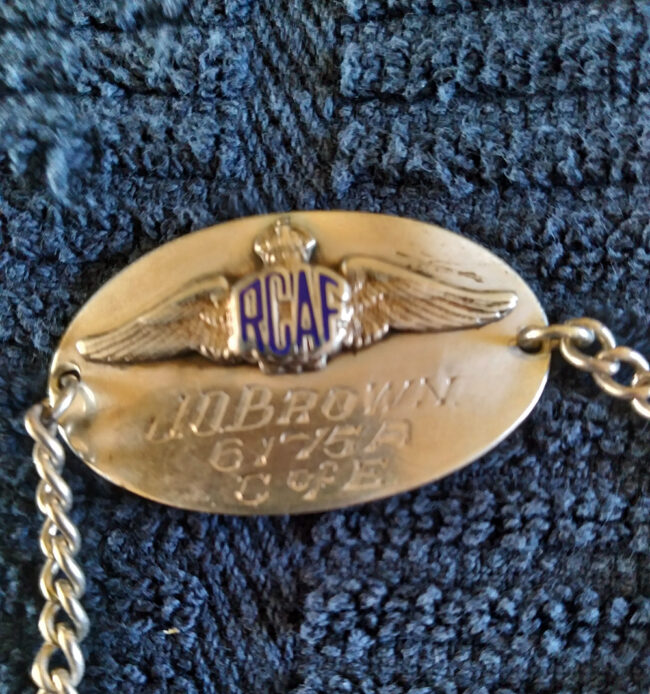 Friends, the skies have cleared, the threat of fire has passed, and we are enjoying lovely fall weather here in the Rocky Mountains. I’m busy with a charity project, an upcoming giant sale of used art called Art From the Attic, which I’ll share with you in my next newsletter.

I would love it if you would pass along this newsletter to your friends.

In the meantime, thanks so much to the book clubs who invited me to speak to them via Zoom, one in Edmonton and one in White Rock, B.C. with another one planned for a club in Peace River, Alberta. Remember I’m always available for your book club, or any other group who wants to read one of my novels.