I mail my Christmas letter to about fifty friends and family members. This year I decided to share it with everyone who subscribes to Letters From Windermere. Thank you so much for your support, and Merry Christmas to all! 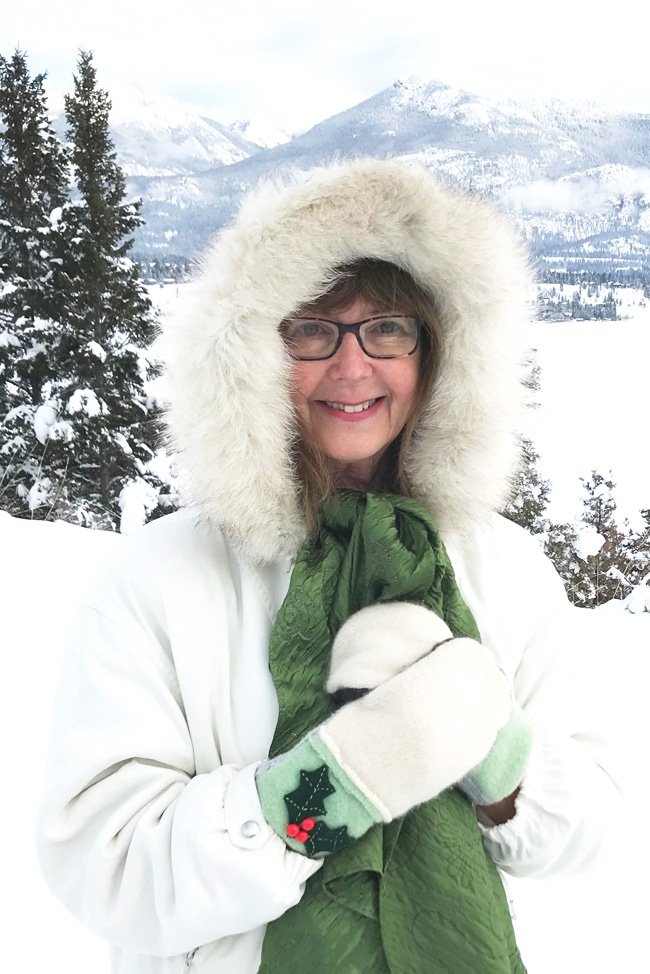 My husband Heinz spent a couple of years as Project Manager for this solar project in Mali, Africa constructed by B2Gold based in Vancouver, British Columbia. Fekola, the largest solar project at any mine in the world, has been such a roaring success that the company is planning a huge expansion. And guess who agreed to be part of the consulting team? Heinz, of course. (I have announced his retirement for the last five years, so I’m now giving up.) The project saves an incredible amount of carbon emissions, so it’s extremely rewarding on every level. 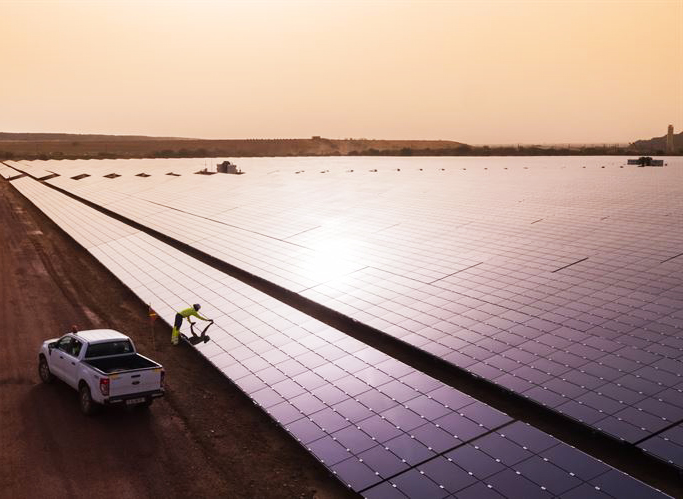 Our eldest daughter Janine and her husband Andrew, who owns his business and works from home, have moved into their gorgeous new house on the shores of Lake Windermere, just a long stone’s throw away. It’s wonderful to look out our front window and see their twinkling lights. And it’s so handy to visit with their children Quinn, six years old; and Axel, four. Here Quinn has her first sewing lesson and was very proud to stitch a Q for Quinn. 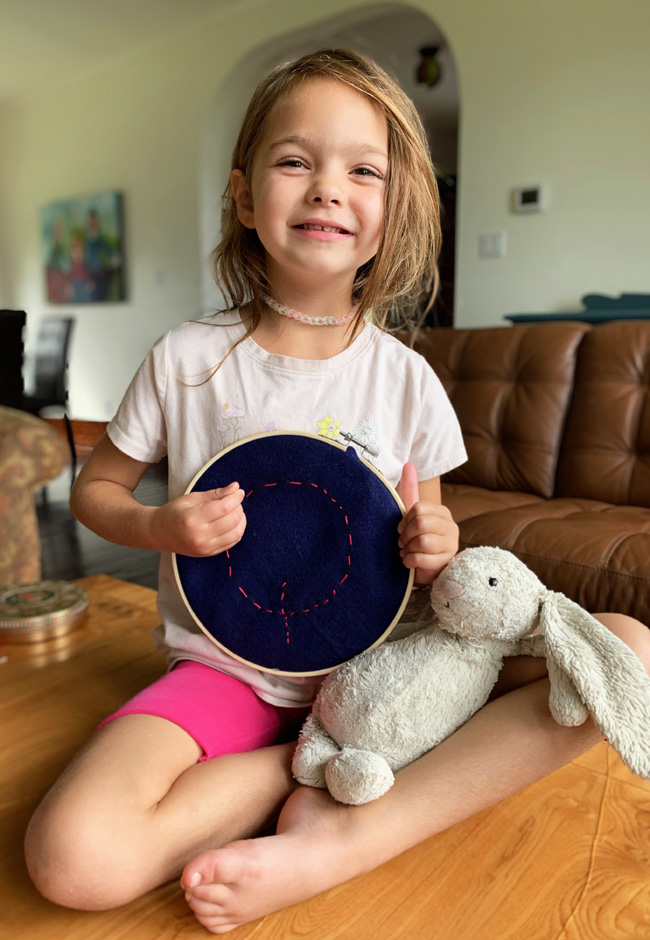 Her brother Axel “helped” me decorate the Christmas tree in my home office. 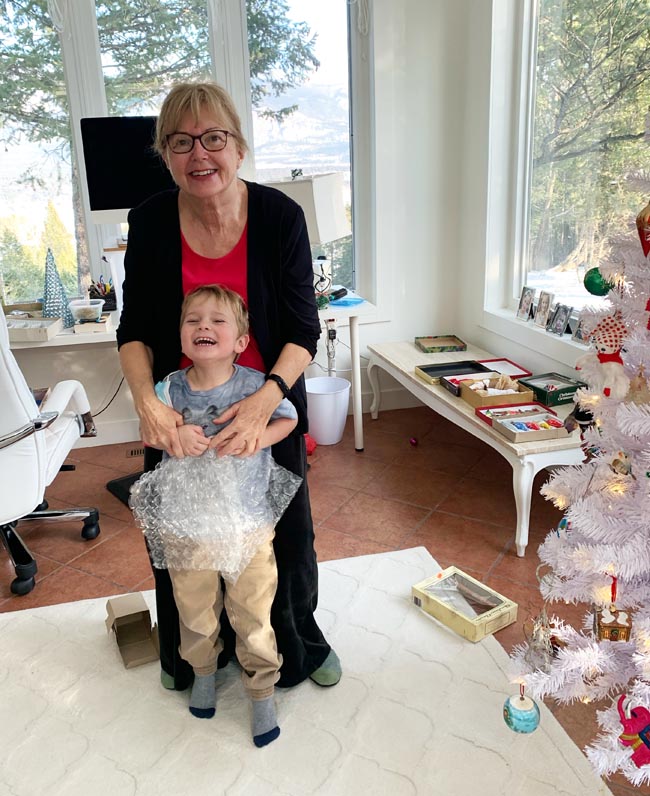 The youngest of our three daughters, Melinda and her husband Andrew (yes, we have two sons-in-law named Andrew — to keep them apart, we call Janine’s husband Jandrew and Melinda’s husband Mandrew) bought their first house and will take possession just before Christmas. For this reason, Heinz and I are spending Christmas with them in Calgary this year, rather than with our two Invermere families. We will miss them, but it is Melinda’s turn since she has been coming home for the past fifteen years.

This lovely older house will require some fixing up, with plenty of advice from her dear old construction-savvy Dad. We can’t wait to peek inside! 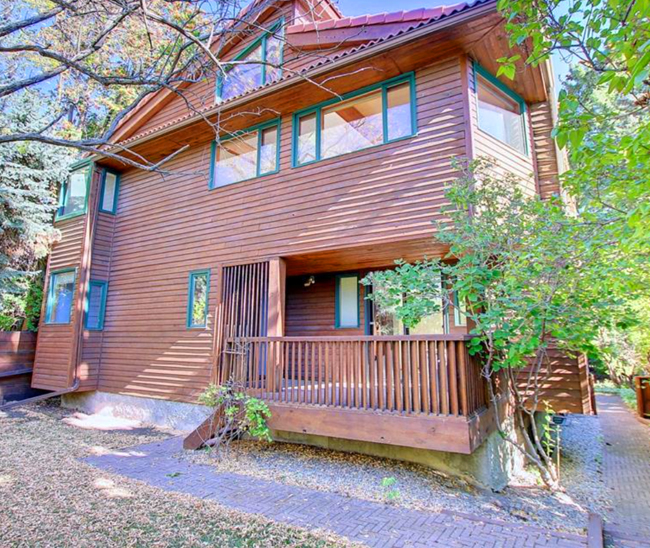 As our middle daughter Katie told me with great feeling, no news is good news! Her husband Tom continues to wrestle bears for Parks Canada (he’s a wildlife management officer) while Katie teaches kindergarten at the same school attended by Nora, aged nine; and Juliet, aged six. Jack, aged four, will join the gang (now consisting of five grandchildren) next year.

I couldn’t resist including this photo of Katie changing the tire on a recent shopping trip to Calgary after the tow truck company told us it was too cold to send out a service guy! I know how to change a tire and have done it several times in years gone by, but wasn’t sure I could lift it onto the wheelbase since those things weight a ton. Luckily Katie is much stronger than me! 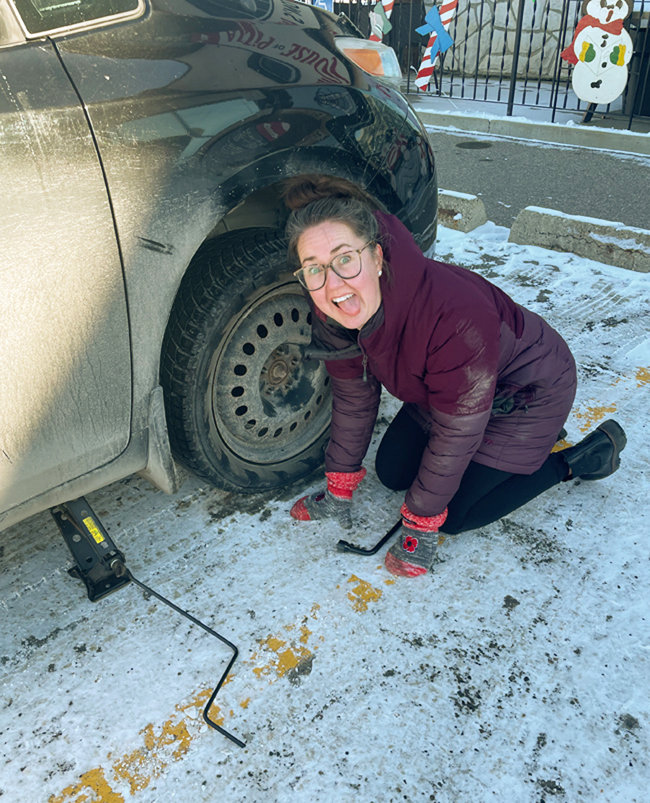 I always love visiting my brother’s farm near North Battleford, Saskatchewan, also my own childhood home, and this summer it was even more special, because Katie and her three children came along so I could show them my old haunts. One of their favourite activities was jumping in the wheat. (FYI, this is not dangerous – the wheat is so dense that you cannot sink). From left: Jack, Juliet and Nora. To see more photos of my farm: Back to the Farm. 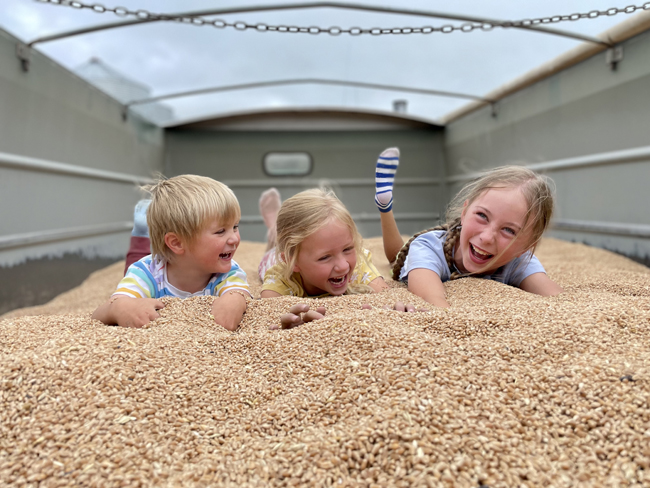 This spring I achieved one of my lifelong bucket list items, a month-long driving trip around the United Kingdom. Before heading up to Scotland, I was one of the guest speakers at Danesfield House Hotel in England, formerly RAF Medmenham, the headquarters for aerial photo interpretation and the setting for my wartime novel, Bird’s Eye View. I revelled in the historical atmosphere! To see more photos of this event: Danesfield Dream Come True. 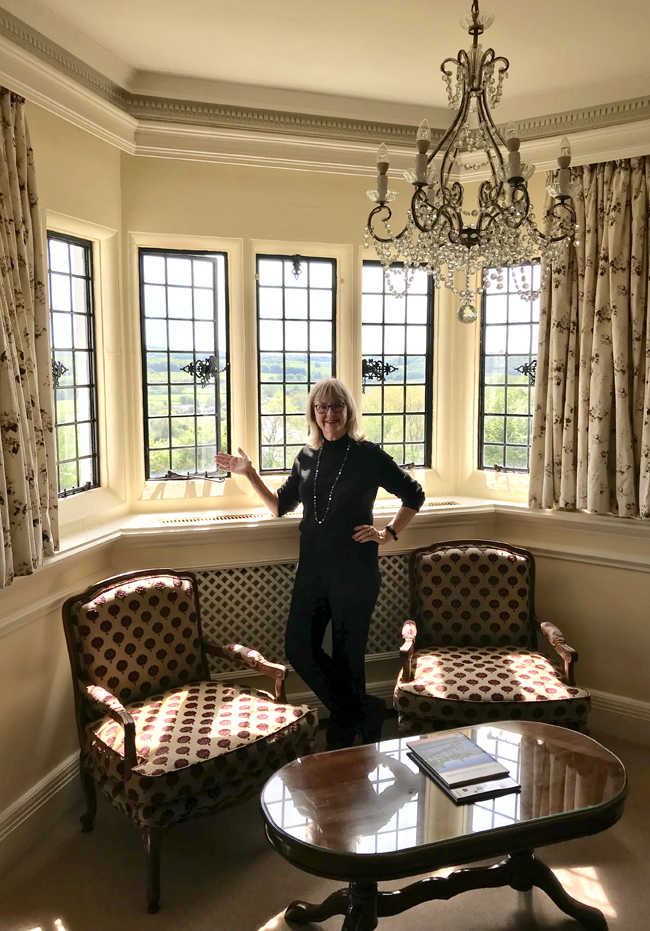 Along with about 50 million other people around the planet, my roots lie in Scotland. If there is such a thing as “ancestral pull,” I felt it strongly when my feet first hit the soil of my Highland forefathers and foremothers. There is much to admire about this beautiful country, especially its people. I celebrated my birthday with this couple whom we met for the first time — fellow author Liz Treacher and her husband Martin, who live in tiny Skelbo, Scotland. 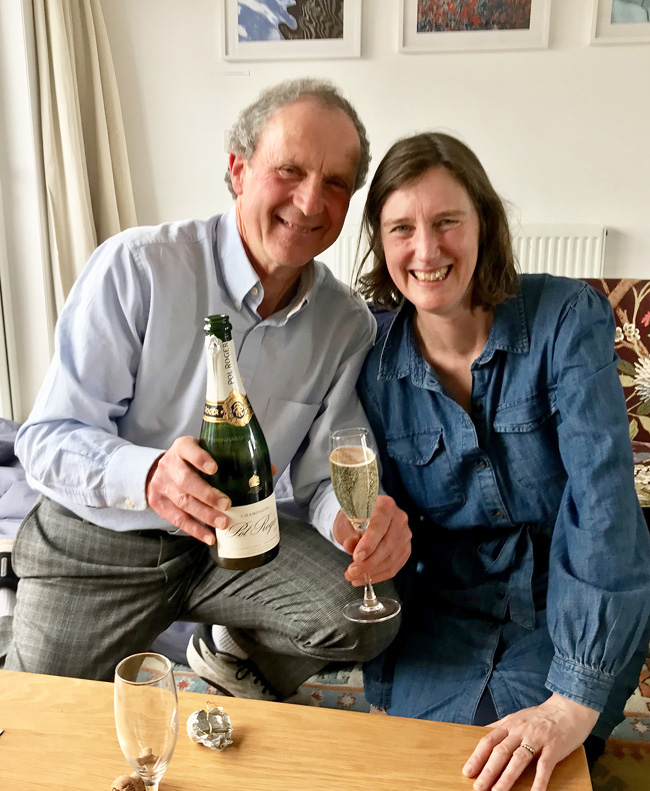 A shining example of Scottish hospitality was our genial host Stuart Singer at The Redgarth in Oldmeldrum, Scotland. He gave us directions, free drinks, and listened every evening to our tales of adventures. 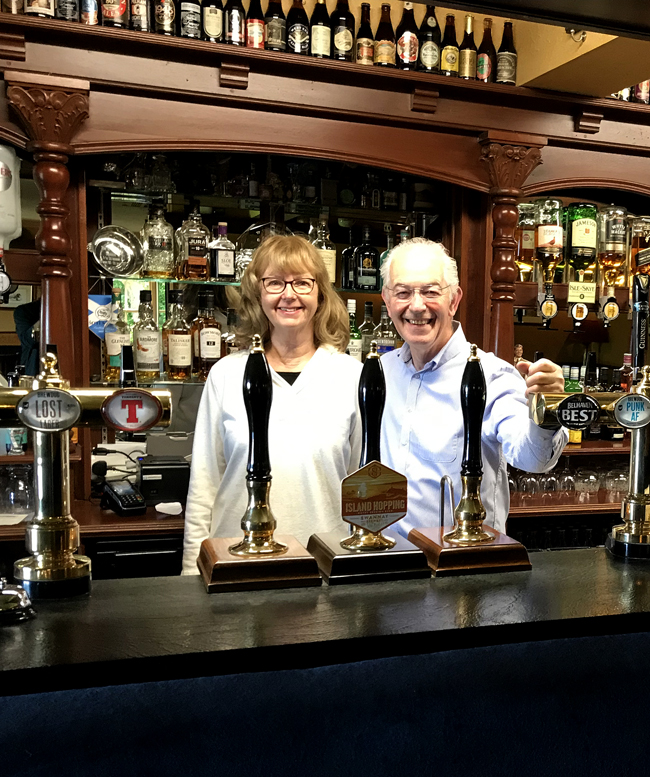 My husband tends to be rather shy, but give him a pint or two — and a real roast beef dinner — and he reluctantly agreed to have his photo taken. He deserved to relax after driving around Scotland on the left side of the road, using a left-handed stick shift.

We decided to travel by car while we still can, because some agencies refuse to rent vehicles to anyone over seventy. At first we thought the speed limit on the twisting narrow roads of Scotland was appropriate at 60 kilometres an hour, until we realized to our horror that they are using the Imperial system and the speed limit was actually sixty miles an hour! We escaped with nary a scratch, although Heinz was unable to see much of the surrounding scenery because he had to concentrate on the road. 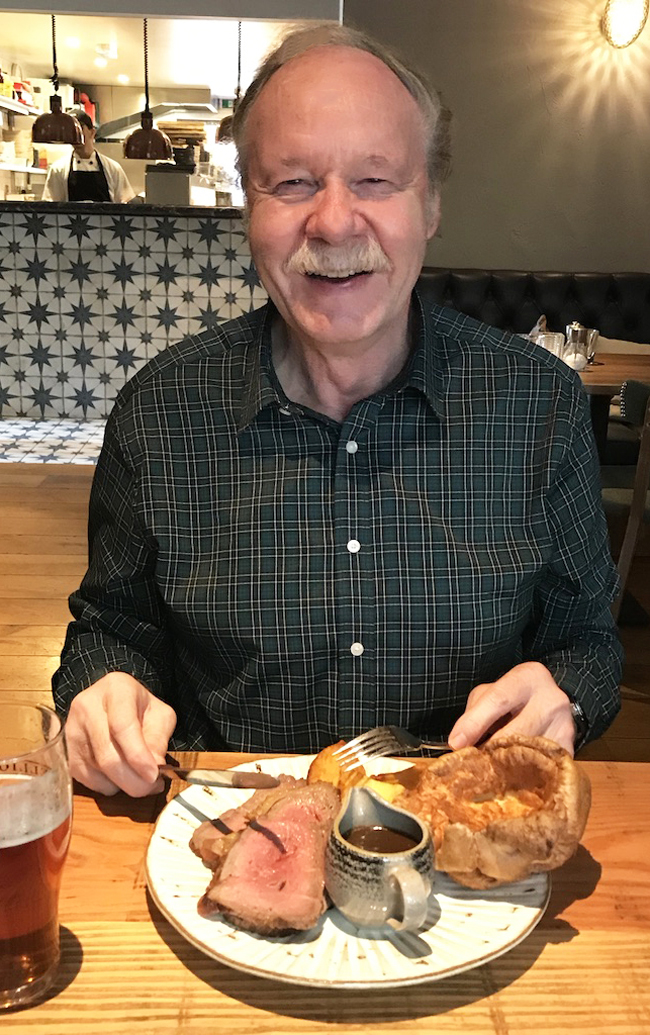 In case you think we never stay home — we spent a lovely quiet summer here in our little town in the Rocky Mountains. I never tire of the changing view from my front window. 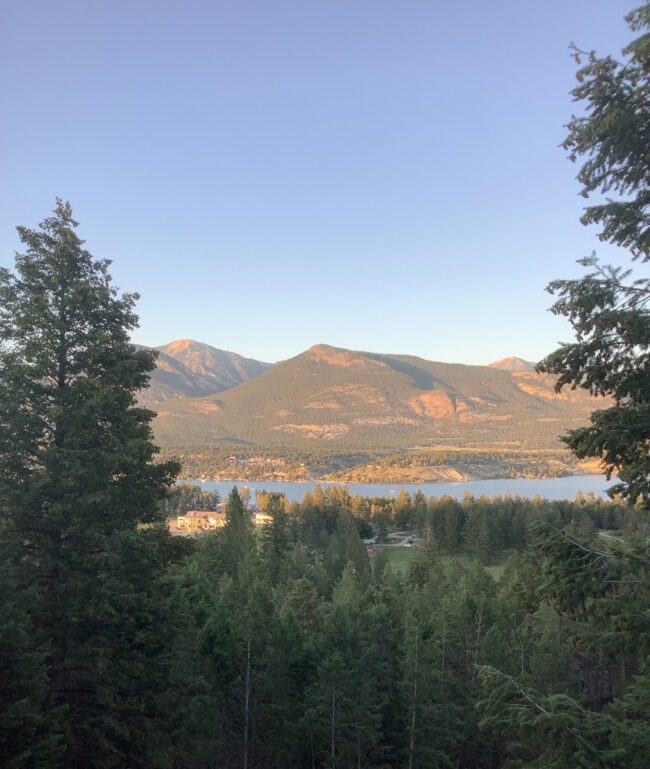 We appreciate our home overlooking Lake Windermere and our summer was absolute perfection. But after it ended, we drove to our cottage in Qualicum Beach, Vancouver Island where we enjoyed the fantastic fall colours. 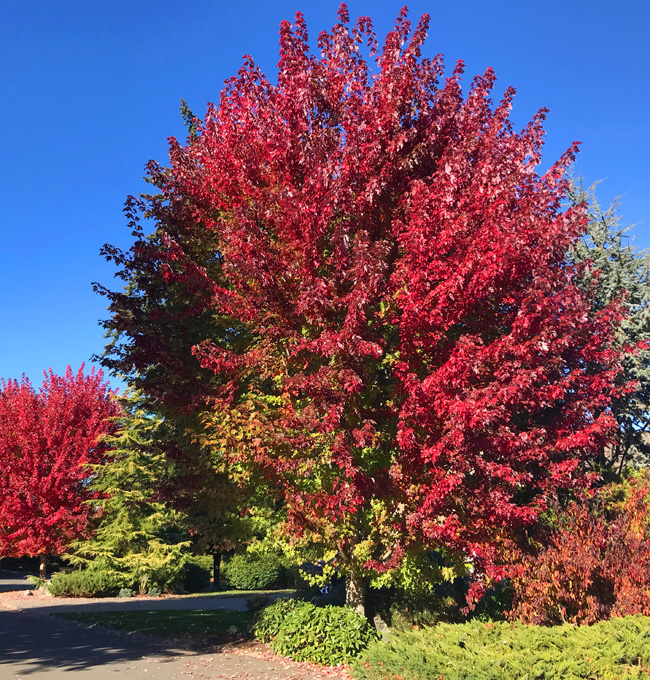 My husband Heinz and our youngest daughter Melinda flew to Berlin for Oma’s 95th birthday on December 1, 2022. Melinda is the only one of our daughters who speaks German, thanks to one summer she spent working on a country estate in Germany, so it was a treat for the three of them to spend this special time together. Oma has led a long and interesting life. Read about her wartime experiences here: Bombing of Berlin. 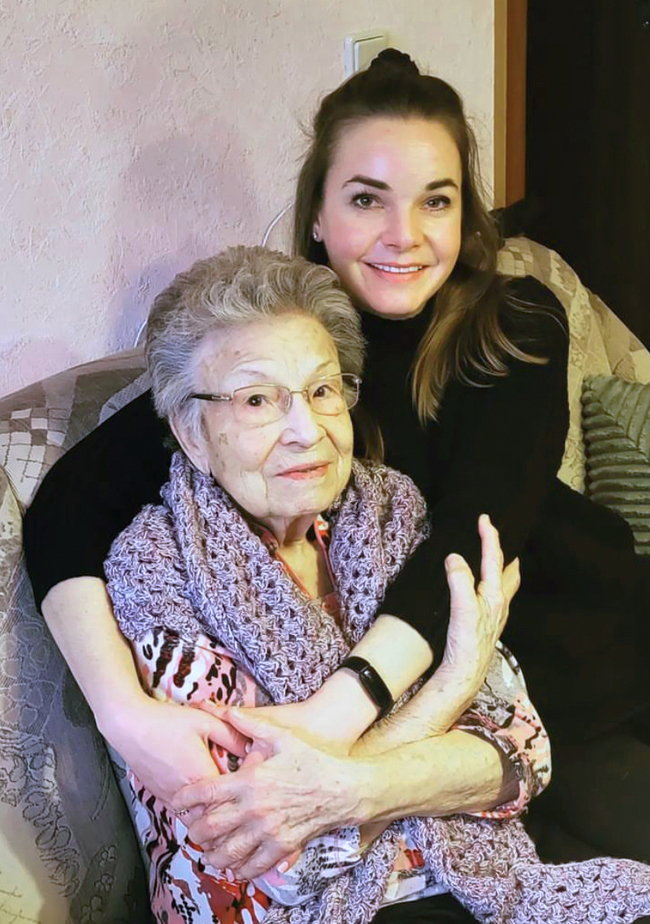 We returned to Puerto Vallarta last year from January to March, and we’ll be heading south again in the new year. We have rented a condo in the same building for six years, so it feels like our southern home away from home.

This photo does not show our condo, which is fairly modern and bland, but here’s a typical street scene (notice how the truck matches the building). We stay near the old Spanish centre of Puerto Vallarta, always filled with life and colour, and the Mexican people rival the Scots for their warmth and generosity. 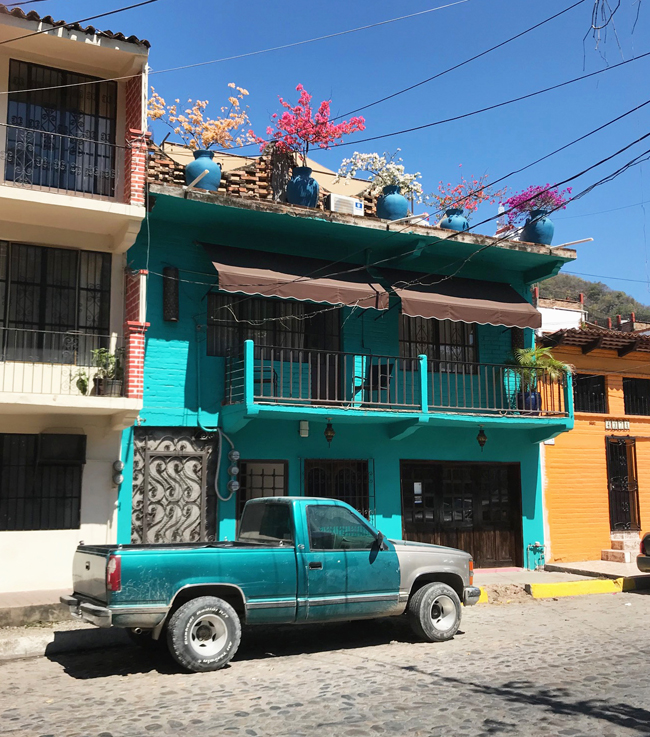 For those who are weary of hearing about my endless WIP (Work in Progress), I apologize. My pioneer novel is finished and waiting for an agent and publisher. All these things take SO MUCH time. Perhaps next Christmas I’ll have better news.

Here’s a teaser: one of the characters in my novel is Alix Westhead, pictured here, the first white woman in the area, for whom the village of Alix, Alberta is named. 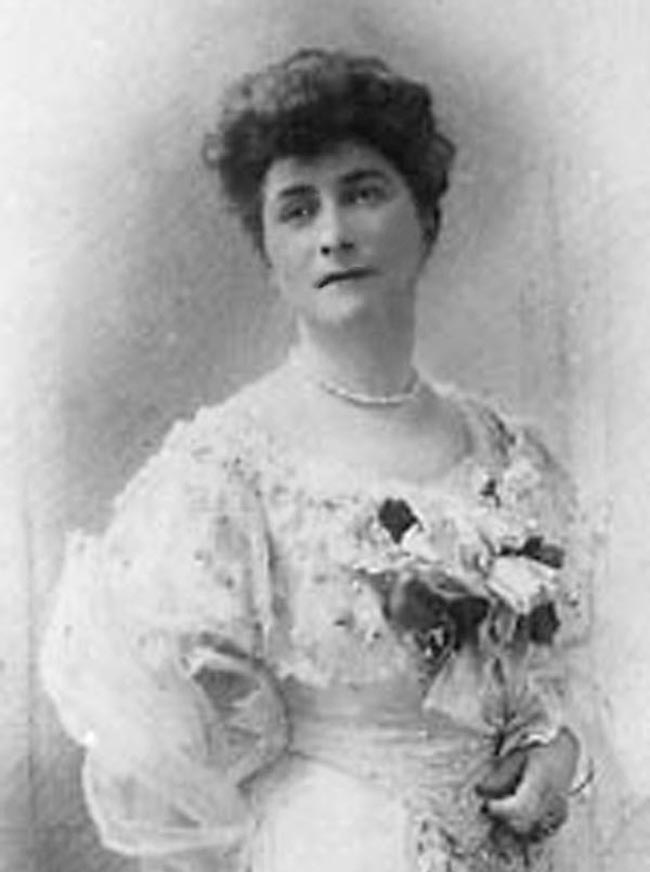 I continue to get regular speaking requests. I have a separate slide presentation for each of my novels, Bird’s Eye View and Wildwood, and I enjoy visiting with groups via Zoom. This month I spoke to the Rotary Club in Chilliwack, B.C.; in January 2023  I’ll speak to a book club in Indian Wells, California; and in February 2023, I’ll address another book club in Arizona, and the Royal Canadian Regiment Museum in London, Ontario. Please pass the word if you know anyone who’s interested.

My dear friends – Christmas letters often paint a rosy picture of life, but there’s nothing wrong with choosing to celebrate the highlights. This year we, too, have lost loved ones, suffered health issues (although nothing major), and experienced our share of personal setbacks and sleepless nights, just like everyone else.

Yet we strive to appreciate our great good fortune in “this rolling world,” as described in this quote from an unknown author:

“To the supremely happy man, all times are times of thanksgiving, deep, tranquil and abundant, for the delight, the majesty and the beauty of the fullness of this rolling world.”

Blessings to you all, Elinor