They say every picture tells a story. Among the thousands of photographs stored in my albums and on my computer, some of them are very dear to my heart. Here is the story behind the photo, for ten of my favourite historical pictures.

The Story Behind the Photo:
Triple Wedding

Bev Letkeman of Osler, Saskatchewan shared her very special keepsake with me, a photo of the three Friesen brothers marrying the three Janzen sisters on October 30, 1929. Bev’s grandparents are the couple in the middle. Both her grandparents came from farming families near Waldheim, Saskatchewan. When they were courting, her grandfather drove the buggy over to her grandmother’s farm, and his brothers tagged along because they knew she had such pretty sisters! All three couples fell in love, and are pictured here from the oldest couple on the left to the youngest on the right. All six brides and grooms were in their twenties, and all enjoyed long and happy marriages. What gorgeous dresses and veils — even their shoes match! 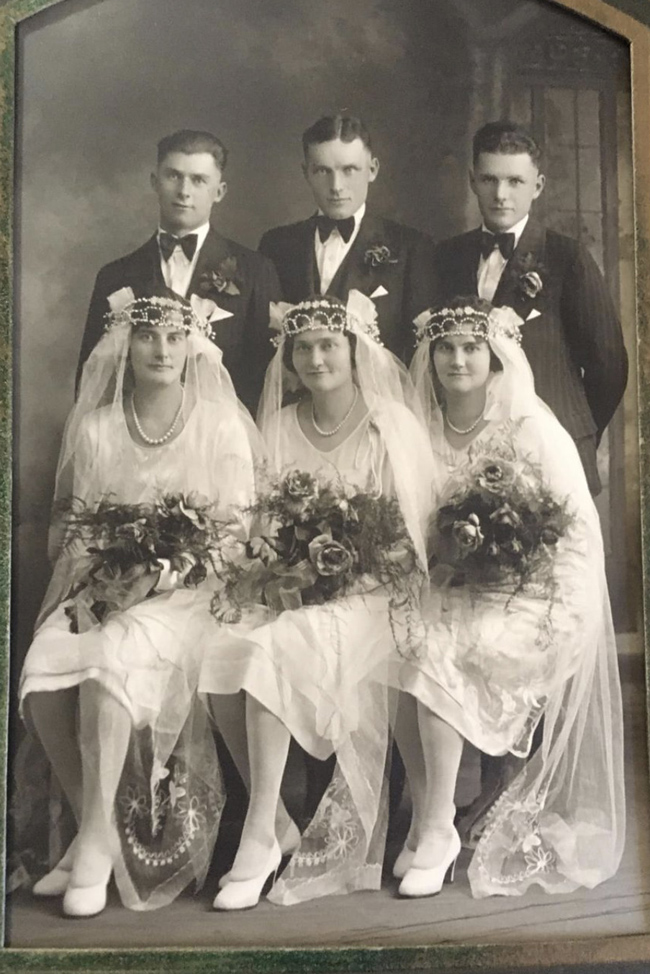 The Story Behind the Photo:
True Love

My great-uncle Ernest Bavin of the North-West Mounted Police was photographed about 1910, lying on his bunk at Fort Battleford, Saskatchewan. Hanging above his bed is a picture of my great-aunt Constance Light (known as Birdie), framed with a lucky horseshoe. They were engaged at the time, against her father’s wishes. My great-grandfather didn’t want his daughter to marry a Mountie, because he was a Staff-Sergeant at Fort Battleford himself! Ernest outsmarted him by leaving the force, marrying Birdie, and then joining up again. Photos of Ernest’s own mother and father are hanging on each side of Birdie’s picture. (And note the tennis racquet behind Ernest’s head.) 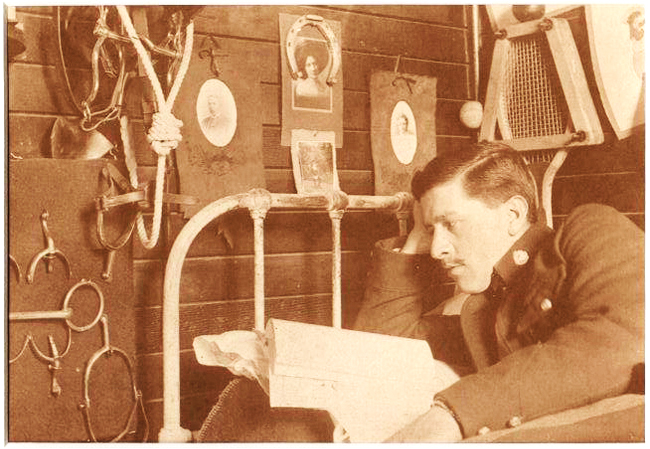 The Story Behind the Photo:
My Dad’s New Combine

Just look on the gleeful expression on my Dad’s face! After Douglas Florence returned from his service overseas with the Royal Canadian Air Force in 1946, he married my mother June Light. They bought an abandoned British Commonwealth Air Training airport from the Department of National Defence east of North Battleford, Saskatchewan and turned it into a farm. Their first Massey Harris 80 combine was purchased in 1952 for about $4,000. Today’s combines have an array of computer controls and sensors, GPS, and air-conditioned cabs. They also cost — wait for it — one million dollars! 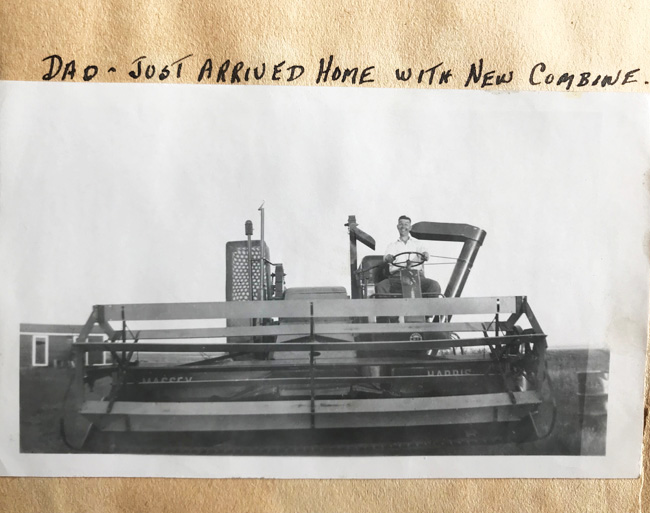 The Story Behind the Photo:
My Métis Grandmother

My great-grandmother Jessie McDonald, who gave birth to these seven children, isn’t in this photo because she died of typhoid at the age of thirty-six, a few weeks after her youngest boy was born. She was a registered Half-Breed in Balmoral, Manitoba. Her grieving white husband Albert Bouskill moved his young family to Maymont, Saskatchewan where he filed on a homestead. My grandmother Mary Margaret Bouskill, standing, was fourteen when her mother died, so she helped to raise her younger siblings. Albert was a kind and gentle man, beloved by his children and grandchildren. He never married again. It is through my grandmother’s family that I’m proud to claim my indigenous roots. 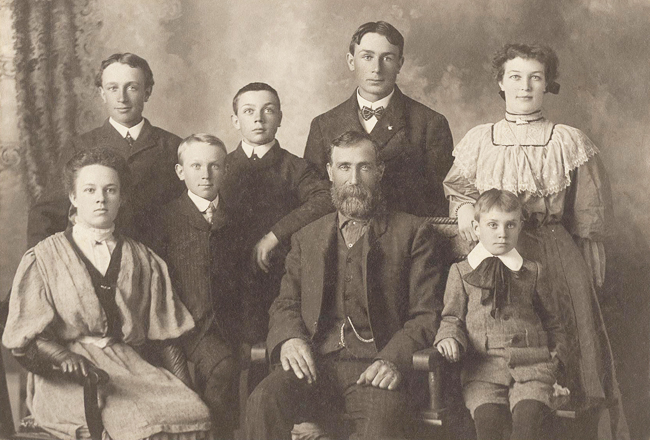 The Story Behind the Photo:
Second Chances

There’s a happy ending to this sad story. Stocky Edwards of Battleford, Saskatchewan was an ace fighter pilot who witnessed death and destruction during his years overseas. After the war ended, he married a young woman named Norma and they had two little girls. The baby was just four months old when tragedy struck. Norma contracted polio and died, in the days before the vaccine was invented in the 1950s by Jonas Salk. Stocky and his little daughters moved to Vancouver, where he ran across a nurse named Toni whom he had met when both were serving in the air force. This photo was taken on their very joyful wedding day. They had two children together, and celebrated their seventieth anniversary last year! Stocky, now aged 100, and Toni, now aged 97, still live in their own home in Comox, British Columbia. Read more here: Stocky Edwards: Fighter Ace, Family Man. 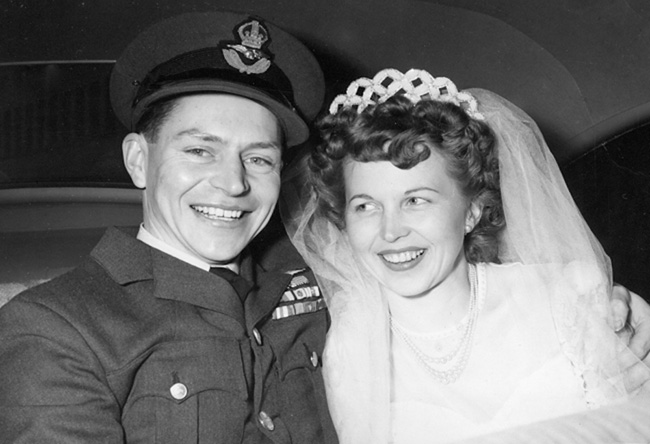 The Story Behind the Photo:
Nurse Survives Massacre

Vivian Bullwinkel of Australia looks like just the sort of jolly nurse you would like to have at your bedside. This warm-hearted soul served in Singapore during the Second World War. She was the only survivor of a horrific massacre in which she and twenty-one of her fellow nurses were machine-gunned in their backs by Japanese soldiers. She was later captured and spent the rest of the war in a prison camp. Vivian was awarded both the Order of Australia and the MBE, Member of the Order of the British Empire. In spite of her gruesome experiences, she never lost her million-dollar smile. Read more here: Australian Nurse Survived Massacre. 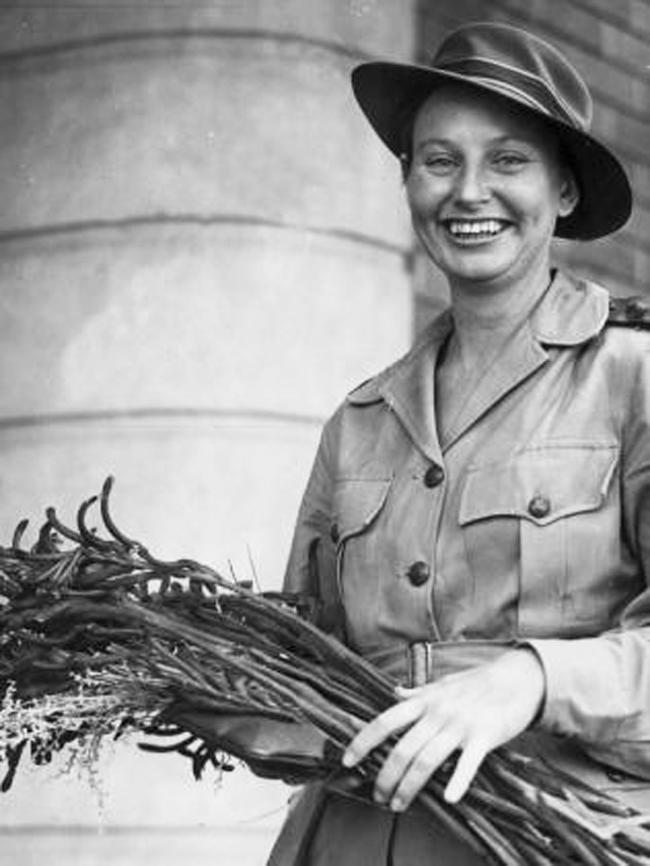 The Story Behind the Photo:
Ronnie, The Bren Gun Girl

This photo makes me laugh, because Veronica Foster didn’t smoke! The photographer asked her to pose with a cigarette in an effort to make her job seem more appealing! Veronica spent the war in the giant Inglis factory in Toronto, along with eight hundred other women, manufacturing light machine guns known as Bren Guns. She became the poster girl for one million women factory workers in Canada, and was nicknamed “Ronnie, the Bren Gun Girl.” It’s not likely she would be smoking in a munitions factory! Read more about their work here: Bombshells and Bomb Girls. 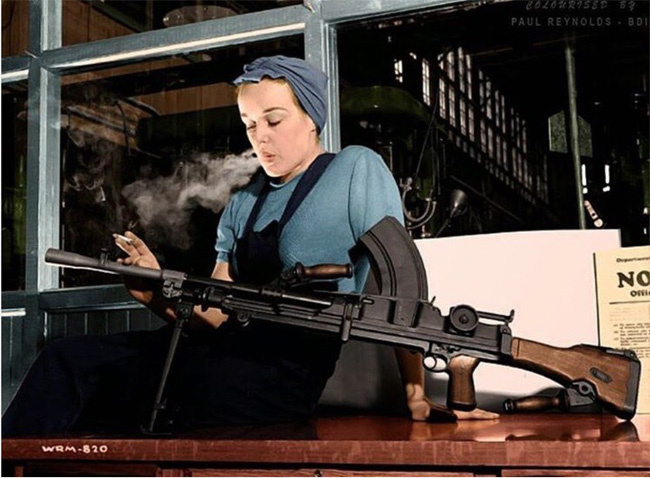 The Story Behind the Photo:
Stolen Identity

I admire the cocky attitude that Royal Air Force bomber pilot Peter Stevens radiates in this photo, because not a single living soul knew that he was really a German Jew! After his parents sent him to England just before the war, teenager George Hein learned to speak flawless English, stole his name from a gravestone, and joined the British air force. Read the whole sensational story here: The German Jew Who Bombed Berlin. 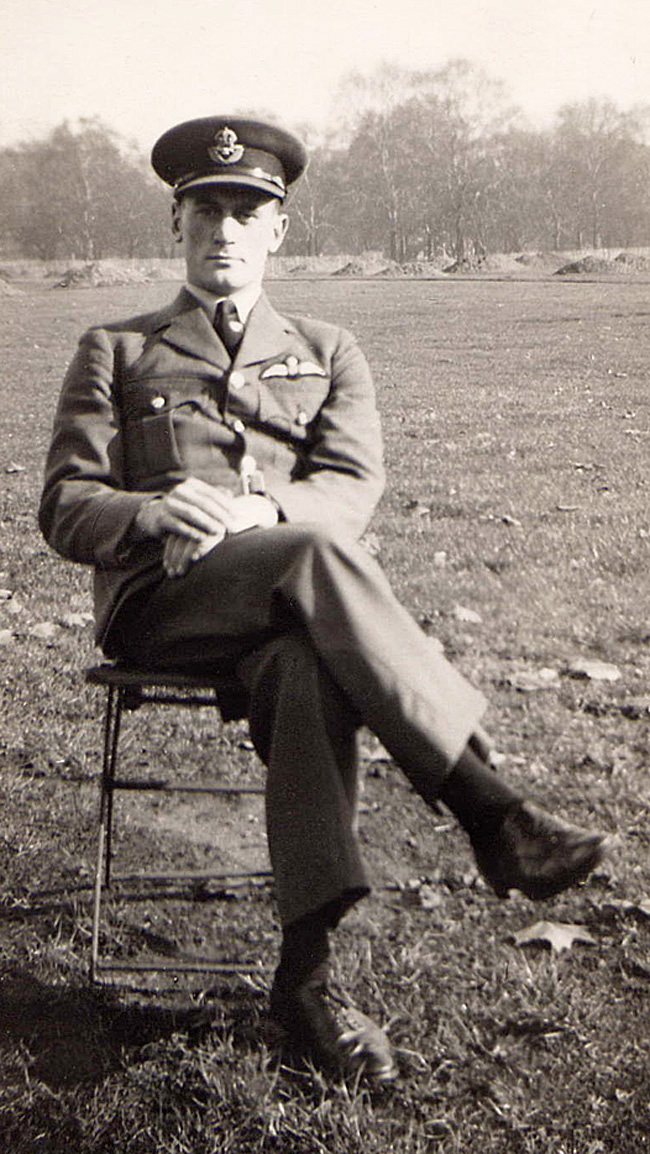 The Story Behind the Photo:
Courage in Action

Willa Walker of Montreal married Scotsman David Walker just before the war started. Within months, two tragedies occurred: David became a German prisoner of war, and the three-month-old baby boy he had never seen died of Sudden Infant Death syndrome. Other women would have broken under the strain, but Willa turned her grief into action. She sailed home to Canada, joined the air force, and rose through the ranks to become head of the Royal Canadian Air Force Women’s Division. For her tireless efforts, she was awarded an MBE, Member of the Order of the British Empire. After the war ended, she was reunited with David and raised four strapping sons in St. Andrews, New Brunswick. Read more here: Willa Walker Led the Way for RCAF Airwomen. 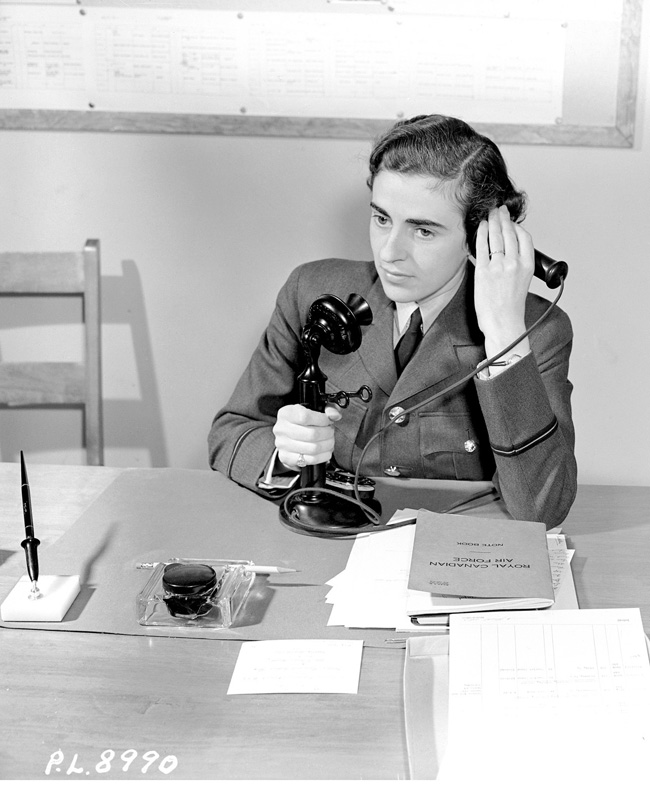 The Story Behind the Photo:
Constance’s Hat

The inspiration for the heroine of my wartime novel Bird’s Eye View was a skilled interpreter of aerial photographs named Constance Babington Smith. This Women’s Auxiliary Air Force officer discovered, on an aerial photograph, the very first V-1 jet-propelled weapon, sometimes called a buzz bomb (today we call them cruise missiles) that terrorized London. She remained interested in aviation all her life. This photo was taken at an air show where she is wearing a hat of her own creation! Read more here: The Woman With the X-Ray Eyes. 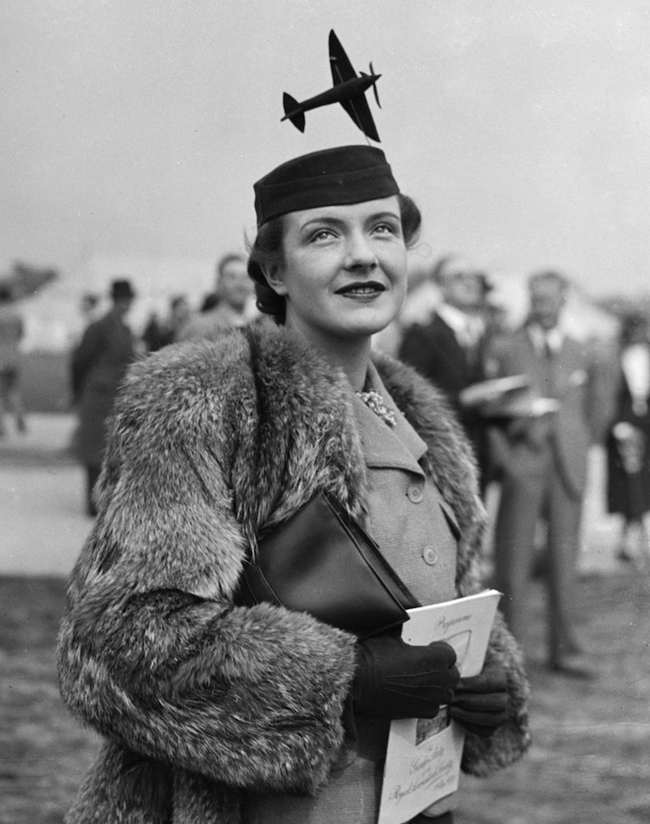 Friends, I am busy preparing for our upcoming trip to England and Scotland. I’ll be speaking at Danesfield House Hotel, located an hour west of London, formerly RAF Medmenham and the setting for my wartime novel Bird’s Eye View. That’s where Constance Babington Smith, shown above, made her amazing discoveries that contributed to the Allied victory. I will share photos of the big event in my May newsletter.